Jump to latest Follow Reply
Menu
Install the app
You are using an out of date browser. It may not display this or other websites correctly.
You should upgrade or use an alternative browser.
Imperator: Rome 8919 Bug Reports 3652 Suggestions 2389 User Mods 651 Tech Support 505 Multiplayer 56 After Action Report (AAR)
Show only dev responses 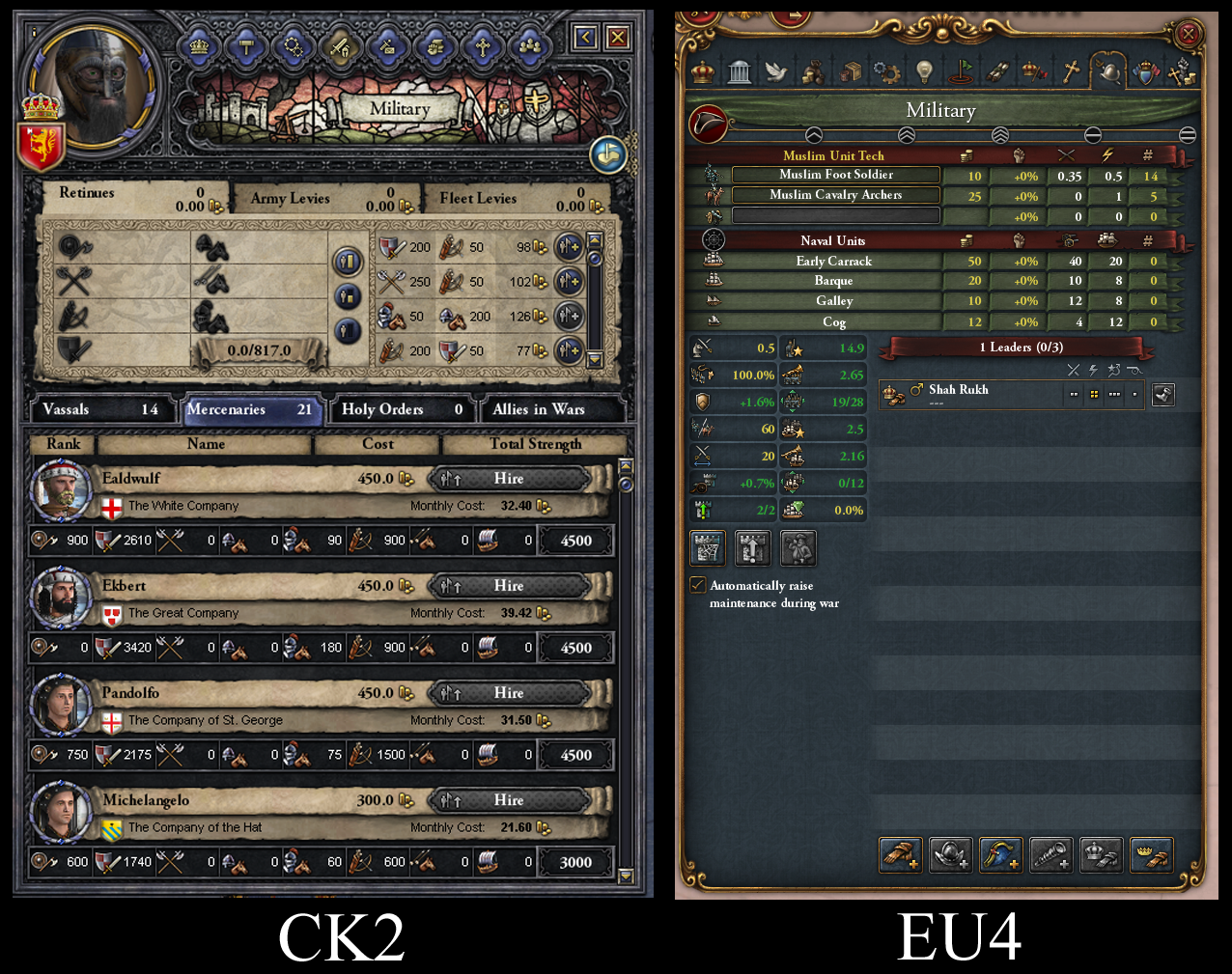 Here we have lots of information presented in a good manner. There is A LOT Imperator can learn from CK2 & EU4. 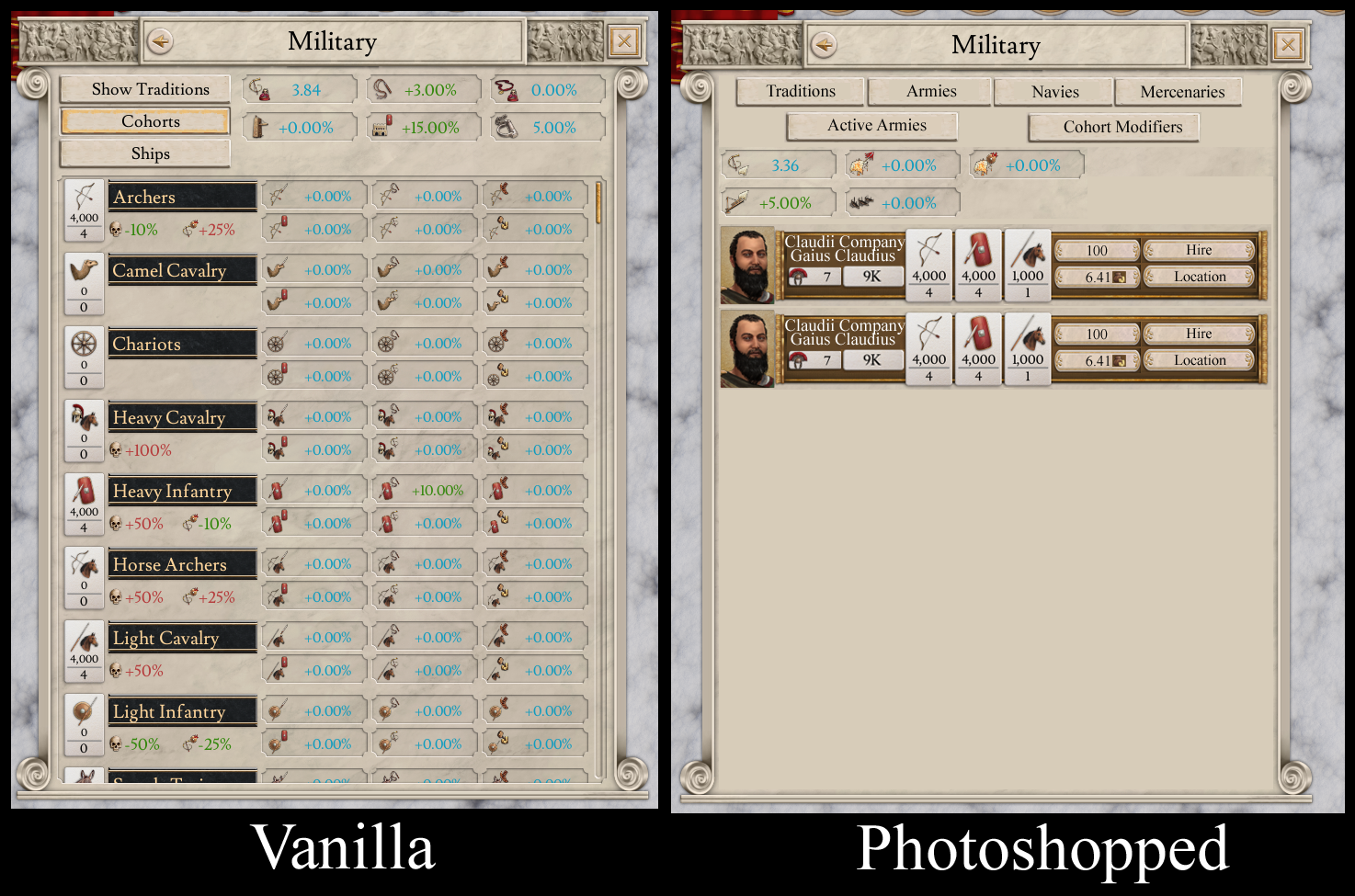 Proposed Idea:​
I have created 4 new Tabs in the Military View. Traditions, Armies, Navies & Mercenaries
Traditions: This is the Traditions & Heritage View. It’s fine as is in vanilla mostly.
Armies: This is where all things related to Armies are located. Just like in the Mercenaries tab you can find and structure your armies properly, even better than you could have in the outliner. (Should add sort by bottoms. Like largest Armies) Morale, Discipline etc, are also found here. We have to go into another tab “Cohort Modifiers” to view the old “Military Cohorts” where we can see stats and modifiers on individual units.
Navies: The Navy tab functions the exact same as the Armies tab.
Mercenaries: Mercenaries are moved into the Military View, as it is a Military thing. Nothing much is changed here except that Mercenaries should follow the very same example I did with Armies.

Vanilla Cohorts: The game should remove all the 0's. It is unnececary and its harder to see which one that actually have a posetive/negative modifier. Just have a line (-) instead. (If not most of this could be scrapped altogether...)

Ideas from other games:
CK2 Mercenaries has a much smaller and compact design.
Eu4 You can click on “Muslim Soldiers” to open a tab with Imperator Army Modifiers for all units
Imperator: Cohorts and Ships are lots of unnecessary numbers in them. Remove all the “0” number completely and only show if it goes in plus or minus. 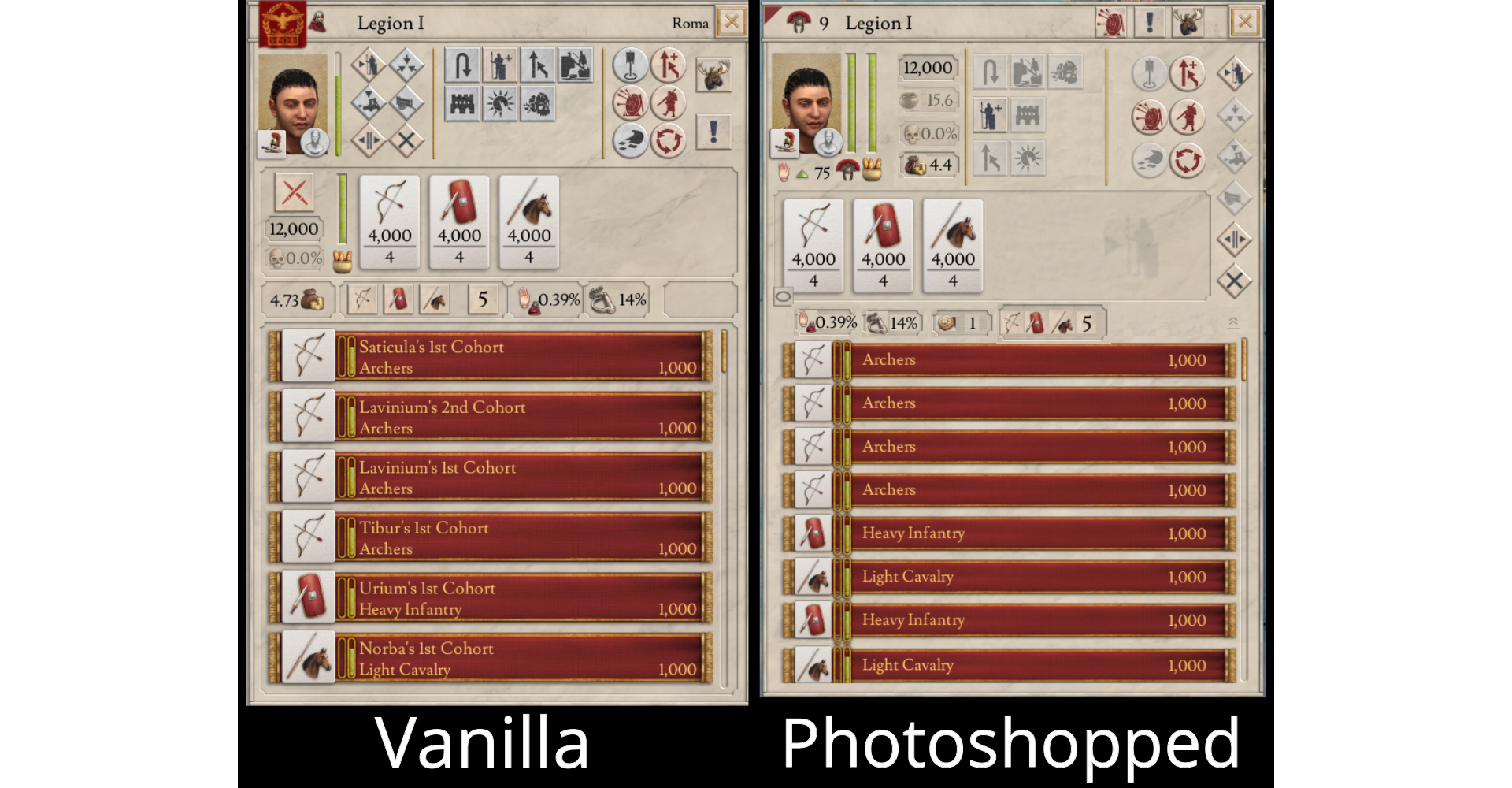 This army view is much cleaner and have more information.​
Changes:


Army Mechanics:​
Individual Armies
Mercenaries
Forts
Battles
Combat Width is more based upon terrain. And is not always 30.
- Forests
-25% Maneuver for Infantry | -50% Maneuver for Cavalry | Skirmish phase is reduced by 50%
- Hills
-25% Maneuver | -1 Attack roll | There are two skirmish phases at the start
Attacker deception tactic could potentially force the defenders to charge removing dice roll negative
- Mountains
-50% Maneuver | There are two skirmish phases at the start | Width of battle reduced to 10
- River Crossing
-50% Maneuver for attackers | -2 Attack roll | Width reduced for battle
Technology unlocks allows for the ability to build bridges which negates the maneuver & defend bonus

glennandre22 said:
A second row in battles, which is used for archers. Archers only have a certain set of arrows, so they cannot fire into eternity. Defenders get more arrows.
Terrain also affect the Archer’s performance.
Click to expand...

Bumping this because thread has good suggestions
Reactions:

You could replace the buttons by actual tabs (like CK or EU), decrease the typo size and line them in a row...


glennandre22 said:
... This army view is much cleaner and have more information...
Click to expand...

You could remove completely the "cards" of unit type and, instead, use small icons without card.
You should remove the swarms of small buttons (toggles), add a tab and place them in the new tab as checks (the checked options should be showed in the main army view)
Reactions:

Are light infantry or archers skirmishers?

Looking at the military traditions for greek and latin trees you might assume that light infantry are supposed to be peltasts/velites. But despite romans not receiving a single combat bonus for archers, the AI is told to use archers in first row...

Ketchup & friends said:
These traits are based on same-named HoI traits. (Some or all might get better names for an ancient setting. It’s up to the devs.)

Adding them will make Generals and Admirals more important. Depending on traits, the same charcter would be better for specific tasks. This would add another dimension to consider in addition to Martial stat, loyalty, prominence and Popularity.

Add traits that make a general or admiral better at certain terrain types.

All these traits should buff attack and defence AND Army/Navy speed on the right terrain (similar to HoI3). Precise values up to the devs but can be 10% like in HoI3.

e.g. An army commanded by a Hill Fighter would have +10% speed when moving through in a Hills tile, and +10% attack and defense when fighting on a Hills tile.

- Perhaps the percentage could depend on the character’s Martial stat?

In my opinion the generals (after some years) should gradually loses civic traits and acquires military ones if there is an hard cap for traits.
An old general should be better then when he started, the traits should reflect his military life style.
Reactions:

Amlet said:
In my opinion the generals (after some years) should gradually loses civic traits and acquires military ones if there is an hard cap for traits.
Click to expand...

But is there a hard cap for Traits?
Besides there are no civic traits. Do you mean they should lose Finesse?

Ketchup & friends said:
But is there a hard cap for Traits?
Besides there are no civic traits. Do you mean they should lose Finesse?
Click to expand...

As civic traits I intended all the not-military traits, like for example "Personality traits".

imperator.paradoxwikis.com
General should lose some traits some traits to earn after some years military traits and still being in the cap. I'm a little sad looking at my best general that after 40 years of wars earned 1 military trait. :/

Paradox needs to step up their game when it comes to combat. It could be 100 times more interesting and interactive. There are a ton of ancient war games for inspiration. Rows, Formations, Artillery, Ammunition, Ambushes, Unique Cultural Units, Terrain, Combat Width, etc.

It really seems to me like the people who developed Imperator did not know anything about combat in the ancient world.
Reactions:

Amlet said:
In Imperator there are a lot of hidden cap (or limit) an I think there is a limit (soft/hard) to the trait cap of a character.
Click to expand...

The wiki article only mentions the soft cap of usually 1 military trait.

Let's ask the Devs:
@Trin Tragula @Arheo @Snow Crystal @Jamor @Chopmist Is there a hard cap or limit on character traits in Imperator?
Click to expand...

Hm, I've no idea if there is a hard cap from a technical point of view, but I know we've implemented it so you'll never have more than 4-5 traits at max, I believe.
Toggle signature
Twitter: https://twitter.com/SnowCrystal_GD
Reactions:

Thank you for clarifying htis.

Snow Crystal said:
we've implemented it so you'll never have more than 4-5 traits at max, I believe.
Click to expand...

Are you sure removing the cap on character traits is a good idea?
Reactions:

Efimer said:
Are you sure removing the cap on character traits is a good idea?
Click to expand...

Tentatively, yes. The characters end up with about the same number of thraits as HoI leaders, but not all of their traits represent their abilities to lead and command troops. They need more traits to reflect their military abilities, AND their personality and health.
Reactions:
Show hidden low quality content
You must log in or register to reply here.
Share:
Facebook Twitter Reddit Tumblr WhatsApp Share Link
Top Bottom