Jump to latest Follow Reply
Menu
Install the app
You are using an out of date browser. It may not display this or other websites correctly.
You should upgrade or use an alternative browser.
Crusader Kings II 69560 Bug Reports 19686 User Modifications 10501 Suggestions 5872 Tech Support 6332 After Action Reports
Show only dev responses

It's here at last; the finalised version of my proposed map mod! This heavily revamps the province setup in the GOT mod in order to make it resemble the maps from the "World of Ice and Fire" companion book. *Revamped vassal setup, designed to reflect houses said to be the most important!
*Kingdom of Dragonstone now held by heir of Iron Throne, to allow vassals to be sworn to them (similarly, Kingdom of Summerhall now a title used in-game).

Still to come:
*Blackwater/Crownlander culture groups, which can shift over time.
*Lord Paramount of the Blackwater Bay title for alternative Aegon Conquest scenarios.
*Alternative titles and names for locations.
*...anything else that people think should be added!

In any case, that should do for now...enjoy! And let me know if you find any glitches; I think I picked up most of them, but there'll probably be a few that slipped through the cracks. In addition to that, some of these ideas seemed perfect on paper, but might not work as well in the final game...so be sure to let me know what's horribly broken so I can amend it!
Last edited: May 29, 2016
Reactions:

Hee hee...well, it shouldn't be too hard to update this if you do!

Um, isn't Moat Cailin supposed to be the only safe route across the Neck for large armies? Because it looks like that bottleneck is gone.

@Wandering Sentinel , from what I can tell he only changed the de jure nature of the titles. The physical map remains the same.

Maybe, but CKII uses a specific way of showing an impassible area, mainly for mountains, and the Neck doesn't have that in the screenshot, which makes me wonder if the bottleneck was removed

Oh yeah, the mountains are still there!
Reactions:

The Neck's only a bottleneck in the lore because it's a vast swamp with creatures living within it. It's impossible to replicate a World of Ice and Fire bottleneck like the Neck or the Eyrie's waycastles because we can just march and army through them.

True, but what I mean is that lorewise, the only way to traverse the Neck is to pass Moat Cailin, but the impassible borders to keep armies from marching across the Neck any other way have been removed. 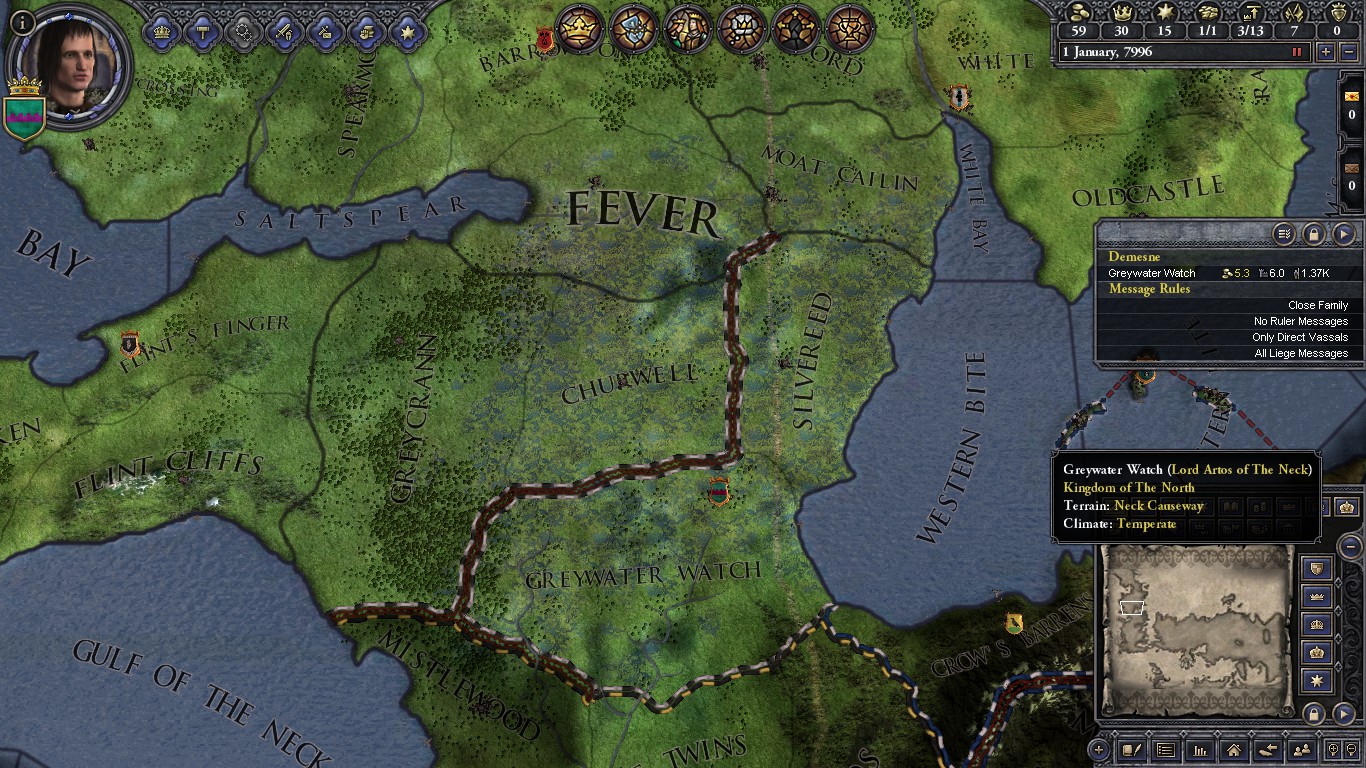 This is my only real complaint due to the fact that you could still post an army at Moat Cailinn to exploit the bottleneck (which just means it funnels people into a specific direction) and buy some time to assemble the rest of your army.
Reactions:

I took it out because it felt wrong to me...I get that it's there to force the AI to only go past Moat Cailin, but at the same time, that's flawed because it cuts off House Reed from their vassals, and it means that an invading army can attack Greywater Watch first of all, when it's been said in the books that that's a location that nobody's able to find, and that nobody's been able to take it (well, except evidently Winterfell). There are a number of locations like this in the series that are tough to replicate; it's been said that the Eyrie and Storm's End have both never fallen in siege, for instance, and yet they're fairly easy targets by CKII standards. Plus having a great big black line in the middle of it kind of threw off the beauty of the map.

That being said, it'd be easy to add it back in; it's honestly just a case of drawing a thick black line between provinces. Still, I'm not sure it's actually needed...for one thing, Moat Cailin already is the faster route to most locations in the North; to go through the Marshes, you'd have to go past three provinces (Greywater Watch>Churwell>Fever), whereas going via the Kingsroad takes only two provinces (Silvereed>Moat Cailin), so the AI should go for that route instead...hmm, maybe I should extend Silvereed's borders to the west a bit, so that it has a land connection with The Twins, just to encourage the AI more. And in addition to that, giving the player no land access between the Riverlands and Flint's Finger seems wrong...surely there must be some minor route there; the swamps of the Neck don't go that far west...there is a forest there, but even then, there should be a route around it.
Reactions:

I myself think the "there's gotta be a way somewhere" point isn't that valid. Most impassible terrain on the vanilla map is not actually 100% impassable, just hard and impractical to get an entire army through. The sahara desert could be traversed in ways not shown on the map, and there's plenty real passes in the 'impassible' barriers in the Pyrenees and the Alps, it is just something armies have rarely, if ever, traversed, because it isn't practical and other ways are more beneficial. I think the swamps would be the same as the Pyrenees in this. Even if there's narrow paths alongside the forest, there's evidently no roads big enough to be practical for large numbers of horses and supply caravans.
Toggle signature
CK3 Mod: Sunset Invasion
GEDCOM to CK3 conversion tool

Hmm, a valid point, but my problem with that is that I think an impassable wall is a bit too restrictive. A small army should theoretically be able to march along the coast to Flint's Finger, and vice versa! Although the fact that the Iron Islands once controlled Flint's Finger could suggest it's only really accessible via ship...

Hmm...I suppose one way to slightly fix this using impassable walls could be to add two that block Greywater Watch from Churwell/Grey Crann, and Grey Crann/Churwell from Fever, thus not actually preventing someone from travelling through the swamps, but making it much slower to do so since you have to zigzag through the provinces. Still, it'd look a bit ugly on the map itself...

Finally getting around to trying it out....by the way, have you considered posting this over on the citadel forums now that you've made it an official submod?

Like I said, that's my only complaint and it's a minor one, the map overall looks good and I do have to agree that the sometimes jagged scars impassable areas are marked with are a bit unsightly at times....

Finally getting around to trying it out....by the way, have you considered posting this over on the citadel forums now that you've made it an official submod?
Click to expand...

Hadn't thought of that...I don't have an account there. Should probably look into it, though!
EDIT: Just added it there too!

Like I said, that's my only complaint and it's a minor one, the map overall looks good and I do have to agree that the sometimes jagged scars impassable areas are marked with are a bit unsightly at times....
Click to expand...

Well, it's still good to raise things like this; it means we can keep looking for a way to fix it! Heck, I was even musing about redrawing the provinces there to make it look "layered", so that an army going through the Neck would need to go through FOUR (or even FIVE if Silvereed was added!) provinces unless they went via Moat Cailin...
Last edited: Feb 8, 2016

What would be cool is if shattered retreat actually made the army retreat in the opposite direction from which it came. For example: if an army is shattered at the Bloody Gate, it retreats back down towards the Trident.

I wonder if it wouldn't be sufficient to do something like make the provinces in the Neck that don't lead up to Moat Cailin have an absurdly low supply limit (under 3000) to deter the AI from taking that route?
Reactions:

queermobile said:
I wonder if it wouldn't be sufficient to do something like make the provinces in the Neck that don't lead up to Moat Cailin have an absurdly low supply limit (under 3000) to deter the AI from taking that route?
Click to expand...

This would make fully upgraded castles in those provinces effectively impossible to siege without tens of thousands of soldiers probably since castle garrisons can have more troops than their levies at times.

Wandering Sentinel said:
This would make fully upgraded castles in those provinces effectively impossible to siege without tens of thousands of soldiers probably since castle garrisons can have more troops than their levies at times.
Click to expand...

The same problem exists in pagan provinces in vanilla tho, and could presumably be circumnavigated in the same way (building forts on the province you have besieged). I'm a fan of the impassable mountains thing too, doesn't really bother me visually, just trying to think of alternatives.


Edit: Noticed quick issue where Driftmark is sworn to the Iron Throne instead of Dragonstone in the Dance of Dragons scenario. Big problem because the Velaryons were Rhaenyra's biggest supporters, and the old seasnake was her hand of the queen.
Last edited: Feb 8, 2016