[Submod] Long After the End - a converter mod for AtE

Jump to latest Follow Reply
Menu
Install the app
You are using an out of date browser. It may not display this or other websites correctly.
You should upgrade or use an alternative browser.
Crusader Kings II 69415 Bug Reports 19652 User Modifications 10445 Suggestions 5855 Tech Support 6309 After Action Reports
Show only dev responses

Long After the End 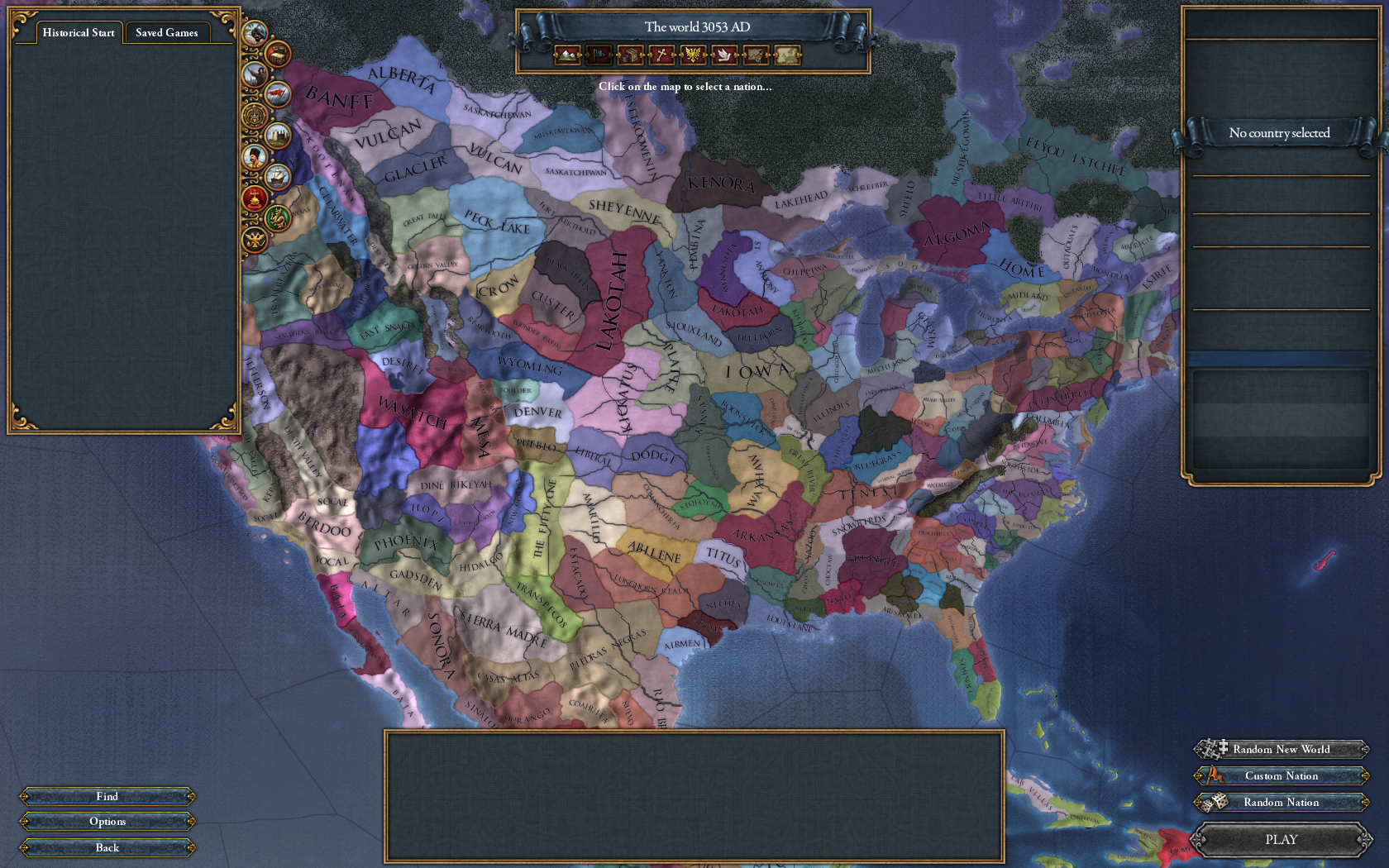 ​
This is a fan-made submod for After the End using the EU4 Converter DLC to continue your campaign beyond the 31st century.

This is an ongoing work in progress, feedback and suggestions are appreciated but bear in mind that a lot more is planned than is currently implemented.

The EU4 converter DLC is required to use this mod; the converter's interaction with Sons of Abraham and Conclave are both supported. A standalone EU4 version, generated with this converter, is available at https://forum.paradoxplaza.com/forum/index.php?threads/mod-long-after-the-end-alpha.1043759/

Features:
- Many new provinces in North America, Africa, and Australia
- Province count reductions in Europe, to make it fit for colonisation
- A totally re-done trade system
- Re-worked HRE mechanics for the HCC
- With Mandate of Heaven enabled, The Celestial Empire of California
- Explore the post-apocalyptic world beyond the Americas
- New religions and cultures
- Totally re-worked colonial and trade company regions

Thanks to xyloz for the Brotherhood of Steel national ideas, originally from the EU4 Fallout Mod
And of course none of this would exist without the wonderful work of the After the End team

I saw this mentioned in the thread and was wondering what happened to it! Very excited for this mod's future!

Have there been new institutions, eras added? Events?

1930sman said:
Have there been new institutions, eras added? Events?
Click to expand...

Institutions and eras will likely be more of a refluff than wholly new content, at the moment only a few small changes have been made to them but we certainly have plans for fitting them into the setting more.
Same with events, most of what's currently in there is housekeeping and minor refluffs. Probably the most extensive event chain currently included is a reworking of the Seven Cities chain from El Dorado, so your Conquistadors can discover for themselves the fate of Rome or seek out the lost city of Amsterdam.
R

Dryhad said:
Probably the most extensive event chain currently included is a reworking of the Seven Cities chain from El Dorado, so your Conquistadors can discover for themselves the fate of Rome or seek out the lost city of Amsterdam.
Click to expand...

I imagine Venice is also in there as a lost city? though I'd think that including Cities that simply would no longer exist in post-apocalyptic scenarios due to the fact that modern technology and maintenance are the only things keeping them around is a waste of space when there are many great cities in Europe(and the rest of the "Old World") who's ruins could hypothetically be found; Paris, Berlin, Prague, Constantinople/Istanbul, Moscow(the Russians that invade aren't from that far west, so we don't know if that city still stand or not), London(oops, sorry forgot that the Empire of the Isles would theoretically be lead from there), and Rome, and that's just with capitals of the pre-Event nations, there are plenty of major cities who's legacy would continue in myth and legend...

though honestly sense these are real cities with real locations it would almost make sense that there would just be events for colonizing the province containing their ruins(though I'd ting that Europe would be populated with more nations then what's shown in these screenshots, are you planning to add more?)

Rip Off Productions said:
in anything I'd think making the new 7 cities be fictional cities from pulp fiction stories, with them being located in general areas where local cities inspired/influenced the original work's depiction of the fictional one to justify their existence in the unlikely event that someone "finds" them.
Click to expand...

There's a mixture of reality and fiction. The Rome chain ties into the Rumors of Rome events from AtE proper (no way for the converter to know which, if any, you received of course, but they are just rumors), but there are also chains for seeking stuff like the Amber Room or the CSS Texas.
R

Dryhad said:
There's a mixture of reality and fiction. The Rome chain ties into the Rumors of Rome events from AtE proper (no way for the converter to know which, if any, you received of course, but they are just rumors), but there are also chains for seeking stuff like the Amber Room or the CSS Texas.
Click to expand...

oh, I wasn't aware of these Rumors of Rome events in the original mod, I suppose it's only fair to include fallow up of sorts in that case.

PSA: there are a few event scripts that come shipped with the mod for testing purposes that people might find useful.

These all have to be fired from the console (press the ` / ~ key on your keyboard to open), and follow the format "event [event ID]"

The scripts are as follows:

Event ID: LAtE_scripts.1
Effect: All North American countries inherit all their vassals, without province autonomy increases.
Usefulness: Nations with low crown authority or high council power will often convert as many independent countries as vassals under what was the main country in CK2. Because of EU4 vassal mechanics, they often declare independence wars early on, which can mess up your early game. Use this command if you want to avoid this from happening.

Event ID: LAtE_scripts.2
Effect: Adds 5 development (2/2/1) to every North American provice
Usefulness: DEFUNCT. This is a relic from before we discovered how to make use of the converter's development distribution feature. Maybe use if you want North America to be even richer?

Event ID: late_trade.1
Effect: Removes all vanilla and converter-added provincial trade modifiers from all North American provinces.
Usefulness: The converter sometimes assigns its own trade modifiers to EU4 provinces, which don't always make sense. This removes them, setting up the game for the next script....


This mod is still in Alpha, so these scripts may be added to the main mod in a more accessible format later on. Until then, I'll be updating this list with any new scripts we add.
Toggle signature
Long After the End Dev

Idhrendur said:
Cool stuff! Now we need someone willing to do a 'Long Long After the End' modification to the EU4 to Vic2 converter…
Click to expand...

Brilliant! We'd have 'Long After the End' for CK2-EU4, 'Long Long After the End' for EU4-V2, 'Way After the End' for V2-HoI4, and 'So Long After the End We're Basically Back Where We Started' for the bonus HoI4-CK2 conversion, when we inevitably cause a second cataclysm by nuking(? Demonic Invasion, Economic Collapse, and other world-ending catastrophes are available) everybody. Again.
Toggle signature
Tales of Your Misdeeds: A Cathay to Ireland Migration CK2 AAR - Join us as we follow along with the various misadventures of Yelü Hongji, the Daozong Emperor of the Liao Dynasty, and his various descendants (of varying competence) as we stride, stagger, and occasionally (well, more than occasionally) stumble our way across Eurasia in search of the (not-so-)mythical Isle of Jade.

It would be a Megacampaign without end.
Toggle signature
Italian-AJT, really people, it's not that hard. aka The Grand Strategy Nerd on YouTube

Is there any sort of Reformation-esque event for the Catholics?

No spoilers, but are there any nations in the East Asia region?

Plasma Master said:
No spoilers, but are there any nations in the East Asia region?
Click to expand...

Depends what you mean by East Asia - Japan is populated, but we're keeping China empty to give the Californians/Mexicans/Haida something to colonize.
Toggle signature
Long After the End Dev

UncreativeArt said:
Is there any sort of Reformation-esque event for the Catholics?
Click to expand...

Not at the moment, and probably not in the vanilla sense ever. We're looking into how to do something similar but the canon religious setup doesn't quite gel with EU4's standard religious mechanics.

Oh hey this has released now, most excellent! I'll be sure to use the converter as quickly as I can!

Will you guys make a "potential end-game scenario" version that lets you just download it for EU4 without having to play through the CK2 version?
Toggle signature
Auspicious portents and serendipitous omens have foretold your arrival.
Welcome alien guest to the home of the gentle and playful Pkunk
Children of the Cosmic Light
Hobgoblins of Joy
Seekers of Spiritual Truth
and other neat stuff like that.

Guthix said:
Will you guys make a "potential end-game scenario" version that lets you just download it for EU4 without having to play through the CK2 version?
Click to expand...

Most likely, especially as there does seem to be a lot of interest in it. Of course, we'd want to get the converter to a much more polished state so that we know which features in AtE will be best for conversion.
Show hidden low quality content
You must log in or register to reply here.
Share:
Facebook Twitter Reddit Tumblr WhatsApp Share Link
Top Bottom