Menu
Install the app
You are using an out of date browser. It may not display this or other websites correctly.
You should upgrade or use an alternative browser.
Crusader Kings II 69293 Bug Reports 19614 User Modifications 10412 Suggestions 5828 Tech Support 6276 After Action Reports
Threadmarks
Big update

Big update:
- Added the Balkan route, just some short and sweet trade roads transporting minerals from Serbia and Bosnia to Ragusa.
- Added Via Egnatia from Constantinople to Durazo
- Updated the Trans-Saharan trade route. I changed the directions of gold flow and added a couple more connections here and there. I'm also planning on utilizing the new DLC features from Holy Fury as soon as it is released. It's also nice that Paradox is adding more flavour to the route so I won't have to do it. 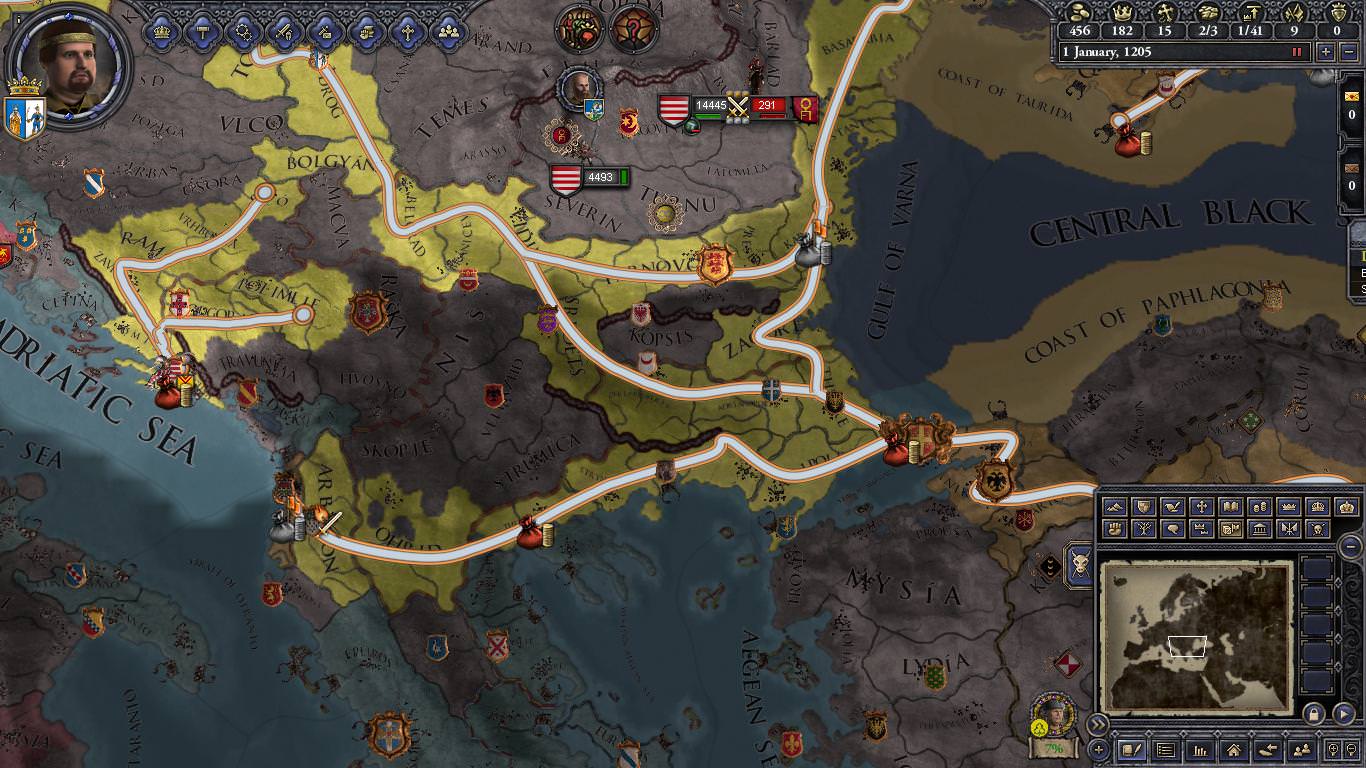 elvain said:
In the case of Trans-Saharan trade this is little more complicated.

The principal trading articles were: gold, slaves and salt. This is what opened the trade in the 8th-9th century. The salt originated from central parts of Sahara, the gold and slaves from the south. The caravans were operated by the Berbers... originaly the middle-men of this trade. They had the salt and they were changing it for gold... that gold they transported to the north where they could buy goods for themselves for that gold. As the volume of trade increased, the northern goods started to be sold in the Sahel too, but still the most valuable trade good there was the salt (and to a degree also horses). The ones profitting the most was therefore the northern part of this trade complex - centers like Sijilmasa, Tahert/Tlemcen, Fezzan and Tunis getting cheap gold.... those were as trading centres totally dependent on resources comming across the Sahara, not the other way around. From this perspective the main direction of the trade was undoubtedly form the Sahel's gold fields northwards.

The only thing to effectively counter this direction would be the technology (and religion), which obviously spread the other way around (OTOH, the civilizations of the Sahel were not that much technologically backward so that the technologies comming from the north would be so essential for them.

That said the starting points of these trade routes should IMHO be Bambuk, Bure and Jenne in West Africa (Jenne as by far the most important trading center of the region before the rise of Timbuktu in the 14th century) and then Kano and Kanem/Bornu area in the central Sahara (as the principal sources for slaves).
If you want little better map also with the main trade goods of Trans-Saharan trade, here you go:
Click to expand...

I've updated the Trans-Saharan trade route to be more in line with suggestions ITT now. It's a lot more dynamic, and I'm a lot more pleased with how it ended up now from a gameplay perspective as well.
Update

- Cleaned up and corrected the clusterfuck formerly known as the Baltic route and split the old one in two. Now peasants revolting in Venice will no longer disrupt the trade activity of Riga
- Made some amendments to the Varangian-Greek, including the stretch headed to Krakow
- Included Gent in the French route
- Dozens of random, minor yet important changes, yada-yada

Next, I will finally add some stuff to southern Italy, the second most neglected area of my mod after Norway. I also have some tricks up my sleeve I'll show off later.
Last edited: Oct 13, 2018
Bretty big update

STEAM VER. WILL BE UPDATED WHEN HIP IS UPDATED FOR 3.0

Update:
- Added compatibility with HIP Furry1 for 3.0 (worked on the mod while beta testing this weekend), hopefully stills work with 2.8
- Made trade posts cheaper, now matching vanilla/HIP price of ~45 gold
- Moved around some trade post building variables
- Touched up on some routes; the Varangian-Greek route is cleaner around Turov, fixed one directional issue along the Trans-Saharan
- Added more stretches to the French route, including cities like Limoges, Clermont, Rennes, Nantes, Vannes, etc.
- Added trade post potentials to single counties with important ports, namely Lisboa, Naples, Syracuse, Dublin, Hordaland
- Baked in the gold vein and salt mine buildings, also allowing salt mines to be built in Lüneberg in the Old Salt Route
- Made a Silver mine (copy of gold vein) building for certain counties in the Balkan route and the Sardinian mine, will add more

More to come. I haven't done much testing, bear that in mind. Trade route values are very finicky things to calculate because they change every time I make a change to the route, and so it hasn't been an efficient process to balance the routes before they were finished, but now they mostly are, so that's what I'm gonna do next. I've been hesitant to make the trade posts more valuable, but I'm gonna cool the austerity and see how things go.

I'll also try to generalize the silk road/trans-Saharan trade route events so that they can be applied to the other routes. I'm busy, so that could take a little while, though.
Last edited: Feb 6, 2019
Minifix

A circle just means it's the end or start of a trade route. The moneybag indicates whether you can build a trade post.