Jump to latest Follow Reply
Menu
Install the app
You are using an out of date browser. It may not display this or other websites correctly.
You should upgrade or use an alternative browser.
Crusader Kings II 69584 Bug Reports 19689 User Modifications 10510 Suggestions 5919 Tech Support 6334 After Action Reports
M

Due to the requests for my modified map after I posted in the main thread and being given permission to upload it. I've never done a sub mod as I tend to just modify the base mod but it seems like it was working when I tested it so you should be able to throw it in the mods folder and enable the mod. Otherwise just copy pasting the files into your HIP installation would work fine.

This submod is also made with the assumption that you use all of HIP's major modules.

Special thanks to @Licarious for finding many little issues I missed and for providing a positions file for my southern map extension.

Credit and thanks to @tsf4 and the Lux Invicta team for letting me use their map that I used to extend the southern portion of the map.

Thanks to Grimes for allowing me to release a HIP compatible version of his Historical Buildings mod.

And of course the HIP Team for letting me release this map edit in general.

Important: With these modifications there are over 308 more provinces on the map as not only is the map extended east but I've also left in almost all the provinces the HIP team removed over the years. For me the game runs fine with this many provinces but my computers pretty overkill for this game. Due to this I wouldn't try to play with this map if you lag at all with the normal HIP map. 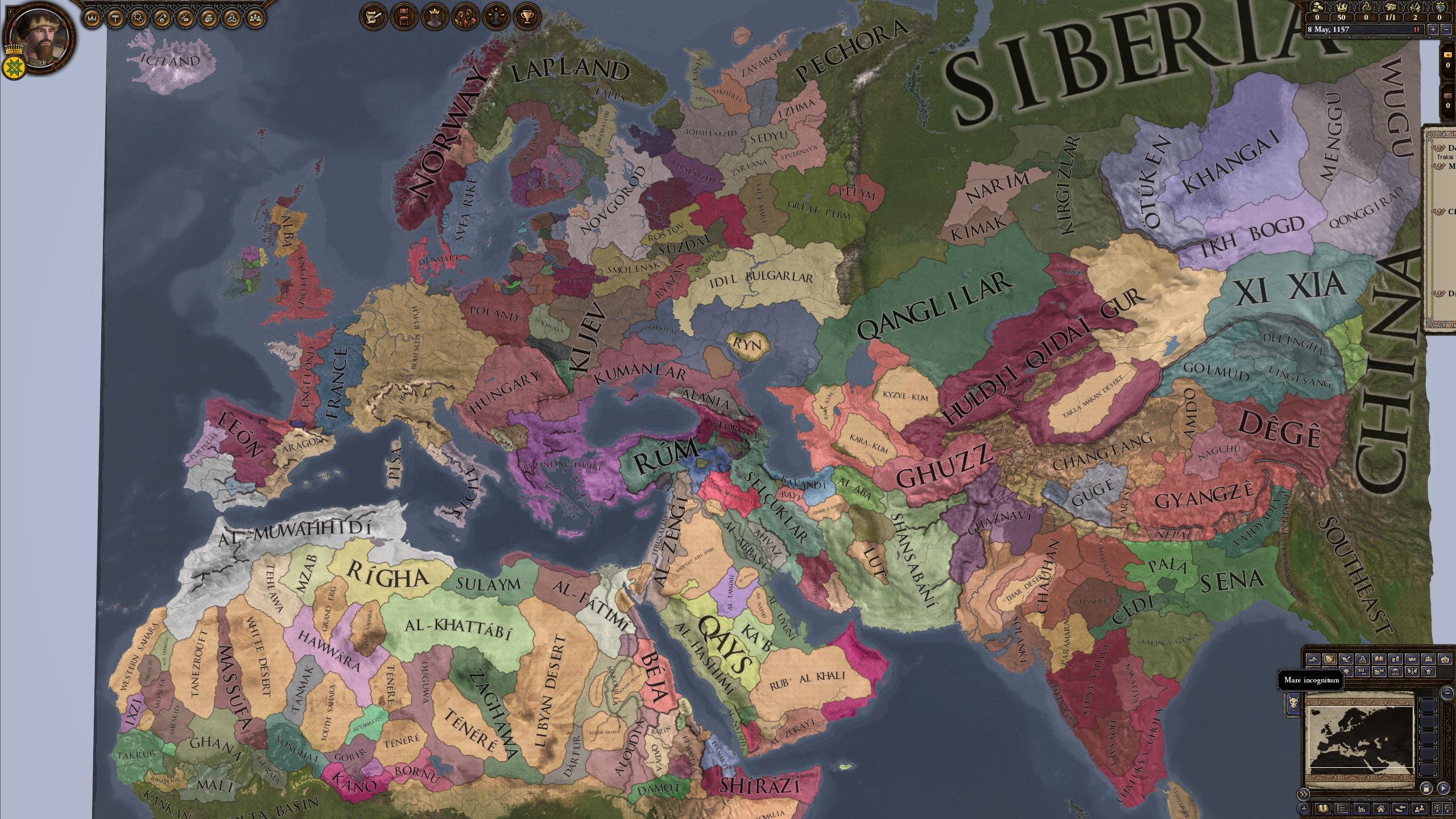 The de jure map has some weird stuff like "d_Moesia" and "k_cyrenica". You get the descriptive (normal?) name if you create the title, but when it's vacant you get the under-the-hood names. Also looks like d_bulgaria and d_moesia have the same color.
M

The de jure map has some weird stuff like "d_Moesia" and "k_cyrenica". You get the descriptive (normal?) name if you create the title, but when it's vacant you get the under-the-hood names. Also looks like d_bulgaria and d_moesia have the same color.
Click to expand...

Wow, that is really impressive, thanks for releasing this! Now I have no excuse not try a game on the eastern part of the map sometime.
Toggle signature
My CK2 Mod Collection: Modular Tweaks & Additions

This is indeed impressive. Just to be sure, I can use this with the SWMH submod, right ?
M

Leri_weill said:
This is indeed impressive. Just to be sure, I can use this with the SWMH submod, right ?
Click to expand...

You mean the one that removes areas? Probably not since I never used it and it probably uses events during startup to remove places.
Last edited: Apr 9, 2019

I launched the game with my HIP installation (with the SWMH module) and your submod and the map seems to be fine, but I haven't tried a campaign yet so there might be some bugs!

Licarious said:
This map is amazing.
Do you mind if I release a submod for this that adds several navigable river systems, ports to the Caspian, and an optional Canal of the Pharaohs?
Click to expand...

Hallelujah! This might actually get me back to CK2 Thanks alot for your effort!

Finally, A Proper Tibetian Empire here I come!
Toggle signature
"Why not expand piracy to something more than just black nation steals now your trade power?" - Shimohi the "nyanpass"

mechl said:
I've also left in almost all the provinces the HIP team removed over the years
Click to expand...

What other non-eastern provinces are in the map?

Hrólfr said:
What other non-eastern provinces are in the map?
Click to expand...

Hrólfr said:
What other non-eastern provinces are in the map?
Click to expand...

I'm at work at the moment so I can't be exact but they are mostly what theking1988 mentioned though I never did add the Irish provinces back and Africa still has some cut. Besides that there's Gallipoli in Greece, some islands like the Dalmatian Isles, Dahlak in the Red Sea, and Qeshm. I also added back in some provinces in Italy, the HRE, the Middle East, and Poland that were merged into other provinces during the revamps My logic with those was that the game covers 700 years so there is no true 'correct' setup (it'd be great if CK3 allowed more dynamic map changes outside Kingdoms) and I like more provinces as long as the cities referred to aren't completely out of the games time period.

The titles localisation file is a .txt instead of a .csv. Heres a .csv version. The mod is Phenomenal, by the way.

I went and added the Great Works positioning for all my added provinces (well I may have missed a few you'll have to let me know) but I assume one of the nudge tool issues @zijistark mentioned was the fact that I couldn't exactly see what I was placing when selecting where to put the great works but they for the most part should be fine except for the water ones if they needed to be rotated.

Have a save game going and want the historical wonders? Make a new game a little before where your game is currently at and make an uncompressed save. Find the section I have shown below and copy and paste it above the 'quests=' section of an uncompressed save of the game you have going (nice and easy as the wonders are separate from everything else in the save file)

@mechl
Very helpful, thanks
Toggle signature
​
A Proud former member and eternal supporter of MEIOU & Taxes
Beta Tester for Community Flavor Pack
All we have to decide is what to do with the time that is given us
J.R.R Tolkien
It is not these well-fed long-haired men that I fear, but the pale and the hungry-looking.
Julius Caesar​

Thanks for your fast update!
S

When I enable this mod, none of the new provinces seldom a few in a couple of the start dates are populated -- and are just randomly generated rulers when the game starts. Is that normal?
M