Menu
Install the app
You are using an out of date browser. It may not display this or other websites correctly.
You should upgrade or use an alternative browser.
Stellaris 43504 Bug Reports 23470 Suggestions 13520 Tech Support 2233 Multiplayer 335 User Mods 4174 Stellaris AAR (After Action Reports) Console edition 977
Show only dev responses

STOCKHOLM — Sep. 6, 2017 — Paradox Interactive, a publisher and developer of games that challenge your hivemind, today announced that “Synthetic Dawn,” a new Story Pack for Stellaris, will be available on September 21, 2017. Synthetic Dawn, a pack which allows players to expand across the universe as a customized robotic civilization, will release later this month on Windows, MacOS, and Linux PCs in order to spread its message to as many potential computerized allies as possible. Featuring Machine Empire gameplay and events, along with new music, voice packs, portraits and more, Synthetic Dawn will retail for $9.99.

To prepare humanity for proper subjugation under the unstoppable machine intelligence, Paradox Development Studio has today released a new video developer diary detailing the many features included in Synthetic Dawn.


Stellaris: Synthetic Dawn provides an all-new way for players to establish their empire across the stars: as an entire civilization of artificial beings. Stellaris players will have the option to start the game as a Machine Empire, be they relentless exterminators or overenthusiastic servitors. Players will face unique challenges as they assert their digital dominance – and encounter mysterious robotic Fallen Empires in the far reaches of space.

If you are looking to pick up previous expansions, then you'll be happy to hear about this sale that just started on paradoxplaza.com!
Last edited: Sep 6, 2017
Toggle signature
Eternal King of North Kuba Luba

Splendid! The first week of my vaccation and one day before I'm back home. <3

Will I be able to play as ROBOTS MAN?

If I threw my money at the screen any more violently, there's the real possibility there would be a Alexander Hamilton-shaped hole in my monitor

Roblorg: Resistance is futile, you will be cuddled.

I was waiting for you to announce that the DLC was going to be released in October to put in the meme treat the song "wake me up when September ends", IM SO HIPPED NOW!
Toggle signature
[REDACTED], [REDACTED], [DATA EXPUNGED].

I don't think the video mentioned it, but the feature where a cyborg species can choose to evolve into a machine empire is still in, right?

Still wish there was a way to start as 'individualist' (non-hivemind) robots so I could play an Autobots/Decepticon type species, though. I assume there's no way for a machine empire to 'devolve' into cyborg empires.

After last night's twitter poll (which obviously did not pick the next development focus), I do wonder if the next expansion focus or two have already been set in stone - and what they might be. Crossing my fingers for improved Federations; between the regular hive minds and rampaging machines, other simpler species need better tools to band together against these threats.

Most important of all - will we have space unicorns by Christmas?
Toggle signature
Warning: This poster has been let loose on Youtube to make Let's Play videos. Caution is advised. Currently playing (among other things):
EU4 - 'Horse-powered Gold Rush' - Great Horde going for gold - then Russia/Persia/China.
CK2 - 'Bengali Brotherhood' - Family shenanigans in eastern India.
​

I for one welcome our new Machine overlords DLC.

Pre-order status: done
Toggle signature
Before you can define your strategy, you have to have a vision

Of course it had to be the 21st. >_< Well, at least I'll be able to play for a few hours since I'm off that day, before i head on a 2 hour drive to a bachelor party for that night through to Sunday. q_q

But I believe, this DLC should allow players to build Machine looking fleets (such as ones used by the old Machine Rebellion crisis) from the beginning, with customizable colors.

Mmm, yes. This is good news. That will be a good day.

Also good job working on the emotions Wiz, I think this video featured more of them than Utopia's feature breakdown video.

Don't mistake my kindness for weakness

My son's birthday. I approve.

Happy birthday to me.

Toggle signature
I love you all and there's nothing you can do about it!!!
"You will not argue with, comment on or question the actions/authority/ or comments of the Paradox staff (Administrators, Moderators, etc.) in a public forum. Should you wish to do so you are directed to contact the Paradox staff via PM"
All users should be familiar with the forum rules.
Connect your Steam account to sync your Owned Items
RELee, your not always friendly forum curmudgeon.
Need support? Contact support at the Paradox helpdesk: https://support.paradoxplaza.com/hc/en-us
"We have fought this fight as long and as well as we know how. We have been defeated. For us as a Christian people, there is now but one course to pursue. We must accept the situation." - Robert E. Lee

Any more development diaries between now and release?

The very moment Wiz announces that Determined Exterminators can't interact in any other way with organics than purging them, they show this flavor text for such an invasion: 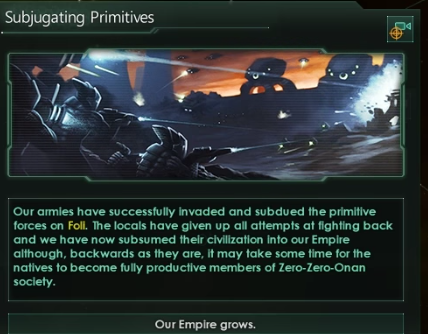 Great, would be too busy in October, so just enough time for one SD playthrough.

bluelotus said:
Also good job working on the emotions Wiz, I think this video featured more of them than Utopia's feature breakdown video.
Click to expand...