Jump to latest Follow Reply
Menu
Install the app
You are using an out of date browser. It may not display this or other websites correctly.
You should upgrade or use an alternative browser.
Stellaris 46893 Bug Reports 27023 Suggestions 16440 Tech Support 2588 Multiplayer 358 User Mods 4419 Stellaris AAR (After Action Reports) Console edition 1124
Show only dev responses

Hello everyone and welcome to another Stellaris dev diary. Today we'll be talking about some changes to ship balance, components and behaviour coming in the 1.8 'Čapek' update. All changes mentioned here are part of the free update.

Dressing the Corvettes
As anyone who follows the regular discussions in the Stellaris community would have a hard time not knowing, the hot balance topic of the last month or two has been 'naked corvettes'. The term naked corvette refers to using a basic corvette hull fitted with only basic, starting weaponry, eschewing shields, armor and more advanced technology. The reason this is considered such a powerful strategy is because these corvettes are extremely cost-efficient: While a fully fitted out corvette with all the best technologies might be two to three times more effective, it also costs up to ten times as much due to the fact that component mineral cost scales far more than their actual effectiveness, particularly for weapons.

In order to address this, we've gone over the cost of essentially every component and ship hull in the game. The base cost of the corvette hull was raised (a starting corvette now costs 100 instead of ~60), component costs were reduced, and the way component cost increases with technology was majorly cut down: Where a small blue laser would previously cost twice as much as a small red laser, it now only costs 3.5 minerals to the red lasers' 3.0, an increase of only ~16% instead of 100%. Similar changes were done to utility and required components, and many components had their base cost majorly slashed, so that it should now always be worthwhile to use those hard-earned technologies to upgrade your ships. 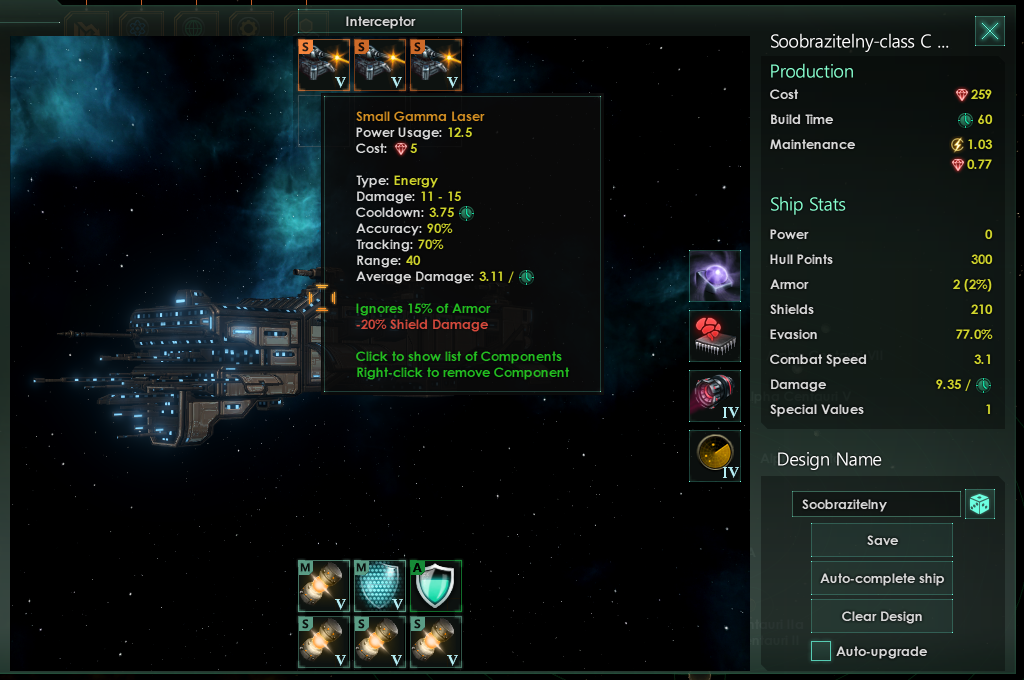 While we were changing the ship component costs, we also decided to make some more general balance changes. Many weapons and utilities had their values tuned to be more balanced, here are some of the highlights:
* Flak is now a Point-Defense slot weapon with a high power cost. It has a faster firing rate and better tracking than regular PD, making it ideal to defend against highly evasive missiles and strike craft.
* Strike craft had their evasion buffed, making them harder to bring down quickly without massed PD.
* Missiles and strike craft had their speed majorly increased, so they will no longer take so long to reach the enemy once the fireworks start.
* Tier 1 weapons were rebalanced to make mass drivers no longer the best choice in every situation at the start of the game.

Additionally, we've also made some changes to the targeting algorithm to make it less 'optimal'. Ships will now have a tendency to continue firing on whatever ship they were firing on, so long as that ship is a relatively sensible target for them. In other words, a large weapon will switch from targeting corvettes to targeting battleships the moment it can do so, but a ship armed with disruptors will not automatically switch targets the second the target ship's shields go down, as this targeting hyperefficiency resulted in specialized weapons being far, far better in combat than their stats would indicate. This does not mean they will *always* keep firing at the same ship, as there is randomness involved, just that they're more likely to.

Missile Retargeting
A frequent complaint about missiles is that their effectiveness is greatly reduced by 'overkill'. What this means is that a number of ships will fire missiles at a single ship, and once say, half of those missiles hit, the ship dies and the other half self-destruct. This results in a lot of wasted shots, particularly when fighting corvettes that can't take a whole lot of hits to begin with. In 1.8, we've added the ability for missiles to retarget. What this means is that each missile has a 'retargeting range', and if their original target dies, they will seek out another target within that retargeting range. Missiles will always retarget at least once, and can potentially retarget multiple times, though each time after the first is less likely. This should address the issue of overkill without having packs of missiles roaming wildly between 20 different targets in lopsided battles. 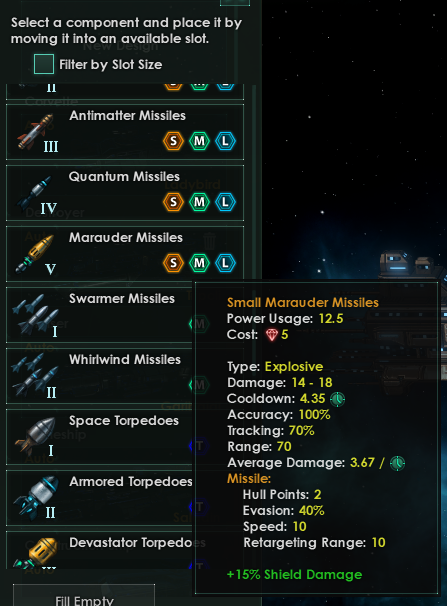 Destroyer Combat Behaviour
Finally, we've also taken the time to address a common complaint about destroyers. Destroyers are meant to be picket ships that can be fitted with a lot of PD, but their cautious combat behaviour means that the cruisers and corvettes will charge ahead of them, straight into enemy missiles and strike craft, resulting in their PD being of little use. To fix this, the destroyer combat computers have been changed to use a new behaviour, called 'Picket behaviour'. Picket behaviour means that the ship will advance ahead and attempt to intercept enemy missile boats and strike craft, putting their PD cannons to proper use on the frontline. 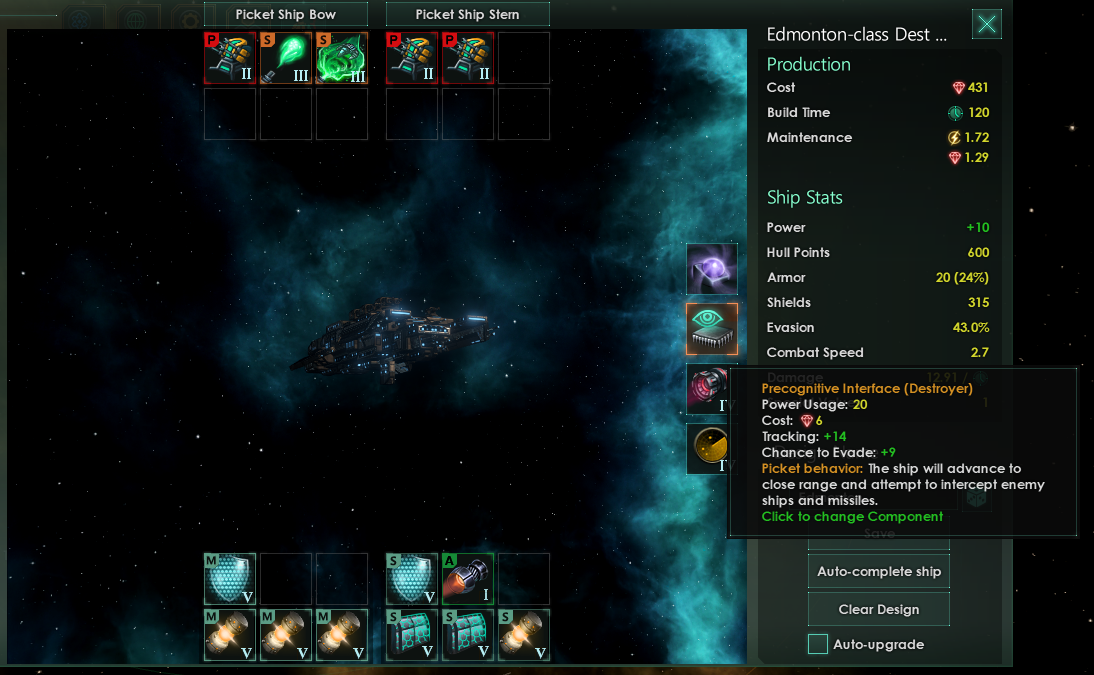 That's all for today! Next week we'll... well... you'll just have to wait a week to see what next week's dev diary is all about. It's gonna be a big one, though.
Toggle signature
For every complex problem there is an answer that is clear, simple, and wrong.

Wiz said:
In order to address this, we've gone over the cost of essentially every component and ship hull in the game. The base cost of the corvette hull was raised (a starting corvette now costs 100 instead of ~60)
Click to expand...

Would the resulting slower start from this change also show in changing the strength of the initial pirate spawn?

Can we get 5 starting corvettes now please? Losing a 63 cost Corvette was already barely bearable for the shitty early game economy, losing a 110 cost would basically be a restart for me.
Toggle signature
⧍ Glorification of the Fit | Mortification of the Unfit ⧍

Wiz said:
That's all for today! Next week we'll... well... you'll just have to wait a week to see what next week's dev diary is all about. It's gonna be a big one, though.
Click to expand...

If it's not playable robo empires, I will riot.

Nice changes overall and the increased cost of corvettes should slow the build up of military so early in the game.

Best news I've had all week.
Toggle signature
Genius only pawn in game of life.

Sian said:
Would the resulting slower start from this change also show in changing the strength of the initial pirate spawn?
Click to expand...

What about balance between classes? Corvettes are still the best choice?
Toggle signature
Some Stellaris mods.

From Russia with love.
R

Basic corvette cost increase will hit builds like FP, Swarms and other militarists\xenophobes very hard. They simply won't be able to expand though conquest before every their neighbor are in pact against them. The later the they get an ability to kill a spaceport, the smaller their chances for survival. Ofc, you can abuse warscore system by capturing new colonies without defenses, but it' not only an abuses, i think i read somewhere warscore numbers will be tweaked, to avoid it.
S

hadaev said:
What about balance between classes? Corvettes are still the best choice?
Click to expand...

They increased the base cost apparently.

I'm not really sure I perfectly like the destroyer combat behavior change. I still want to have an option to keep them next to my artillery ships in case, for example, another enemy fleet comes from behind.

That said, destroyers not protecting corvettes and cruisers that chargeahead from missiles/strikecraft *is* a problem.

Damn, it's a mistake to be active on the forums AND look forward to Dev Diaries.
You always end up hyping yourself towards Thursday to get new info on the next DLC, just to be presented a summary of what was more or less hinted anyways

But regardless, I strongly agree with the presented changes and are curious to see how they pan out.
Toggle signature
Greetz, Alblaka

Personally hoping for Titan class ships next week but... not sure that's likely to happen.

When it's something big it's usually more game changing than a new class of ship... though I think that'd be cool. Nice to see this addressed though it does leave me wondering what's up next. I mean technically we already have a good idea what the blue computer looking extra hive mind option is so while big I wouldn't think it worth keeping one in suspense over because it's not something we don't know about yet.

At least not those who watch the streams and follow every bit of info that is.
L

Wiz said:
you'll just have to wait a week to see what next week's dev diary is all about. It's gonna be a big one, though.
Click to expand...

You are evil.
Toggle signature
Be creator. Be conqueror. Be destroyer. Be savior.
THE CHOICE IS YOURStellaris