Menu
Install the app
You are using an out of date browser. It may not display this or other websites correctly.
You should upgrade or use an alternative browser.
Stellaris 41937 Bug Reports 22214 Suggestions 12617 Tech Support 2106 Multiplayer 322 User Mods 4086 Stellaris AAR (After Action Reports) Console edition 910
Show only dev responses

I have a question... how many more Operations are there than the ones we've already seen? Or have we seen everything?

How many in each category?
Reactions:

Absolutely can't wait to get my hands on dick!
Reactions:

So the espionage system become just like in other games were random number rolls against random number until something bad happens to the spied on empire. I hoped for something more engaging.

Will criminal megacorps/subversive cults have some special missions/effects to make them fun to play as and against?
Reactions:

As a German, I found this both funny and true about me. Thanks a lot!
Reactions:

How much from dev diary 191 is going to make it in?

Hi all! As mentioned last week, our plan for today is to go over some changes to automated colony management and pop resettlement. As a reminder, these are still under development, and as such may undergo significant changes and won't be going...

I am... so conflicted about this update. I love the modding changes, the first contact system, the new intel system, and the outliner reorganizing. I hate the economic restructuring for being pointlessly disruptive and smashing every economic AI mod into tiny little bits. I've been mostly won over by the new pop resettlement system, especially since it should be easy to mod it to be faster while still having much better performance than current GTOS, although I still think it's way overcomplicated. I am profoundly ambivalent about the DLC and about espionage, neither of which matter to me at all. Still haven't decided whether or not I'm going to update to 3.0; probably depends on whether or not Starnet gets updated, although maybe I'll make a 3.0 version for myself if Salvor doesn't.
Toggle signature
Mods:
Galactic Community Expanded, Galactic Community Expanded Defines, Declining Pop Growth, Improved Genocidal Diplomatic Stances, Terraform Links: Tomb to Gaia, Nanite to Gaia/Machine/Hive, Habitats for Void Dwellers Only
Reactions:

Is there a way to take a planet out of the outliner?
Toggle signature
“And all those exclamation marks, you notice? Five? A sure sign of someone who wears his underpants on his head.”
Reactions:
G

Okey... you know people are gonna take the update name the wrong way Why not the "Philip" update
Reactions:

I have been browsing for a few hours now to buy me a new CPU. If we're going to play, we're going to do it right! All the way to the end game and beyond!
Toggle signature
So close, no matter how far
Couldn't be much more from the heart
Forever trusting who we are
And nothing else, except Victoria III matters
R

heres hoping they finally gave in and added megastructures to the outliner
Reactions:

I love the changes to how espionage works. Really seems more streamlined and less complex, all without removing choices.

Complex can be fun, but only because it adds more options. We are playing a game, not solving math problems.
This is why I also love the changes to how we can list planets! Damn, micromanaging should be hard because you are undecided on what to do, not hard because you have to scroll a infinite list over and over!

PS: I know that "Dick" is supposed to be the author, but it made be laugh. Especially since pre-contact conflits are a "Dick" move, since they couldn't be done before this update.

This is just too hard not to joke about.
Reactions:

I'm not a fan of the change to make it only possible to have one operation against a particular empire at a time. It feels completely arbitrary and gamey.
Reactions: 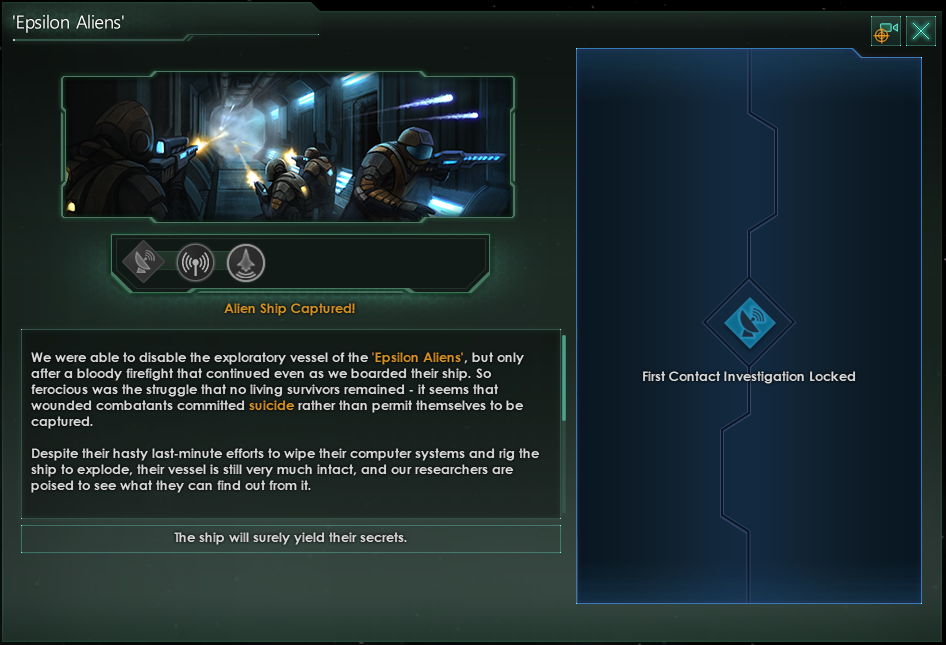 Is this event going to require us to actually disable a science ship from the other nation, or is it another instance of the sort of "phantom ships" that we see in the Awakened Empire/War In Heaven events?
Reactions:

with any existing species portraits in the wiki and game (clothes and profile) and i can't find any match.

Am i just blind or is this something new?
Toggle signature
Mind over Matter

View attachment 694407
with any existing species portraits in the wiki and game (clothes and profile) and i can't find any match.

Am i just blind or is this something new?
Click to expand...