Looking for producer and a bunch of programmers and artists? EU5 confirmed!
Reactions:
J

mag_zbc said:
Looking for producer and a bunch of programmers and artists? EU5 confirmed!
Click to expand...

Starting in the new year we’ll be talking about all of these new features, covering everything from spy networks, to operations, assets and how they tie into Intel. We’re very excited to soon be able to share the progress our team has made.

Make Victoria 3 said:
Will espionage abilities also be affected by the appearance of the species or organic/non organic/hive mind status of the involved empires? It would be rather difficult for a religious empire without robots to infiltrate determined exterminators or the other way around or infiltration of fanatic purifiers that have a different portrait unless one has the genetic tech to allow changing of appearance should be rather difficult... So some opposing empires should simply be difficult if not impossible to properly infiltrate without certain tech(s) unless they have your pops on some of their planets and not under the quicker purge types either.
Click to expand...

Well, you could conceivably bribe citizens of the empire, or perhaps blackmail them into helping you. At least that's what I'm hoping for in cases like this. I would really hate to see gestalts and genocidal empires left out yet again from new content.
S

NilsFabian said:
I fully agree with this. Espionage is more like getting intel about the other empires, how strong are they where are the colony worlds and so on. I won't mind the occasional sabotage or assasination mission but those should be hard, long tasks that happen only from time to time and would give you some sort of immunity as your security is up to their tasks after the enemy killed a governor.

Speaking of Espionage I'd like to to a Cato and repeat my biggest wish, no reveal of an empires homeworld after a first contact. Thats either up to the information policy or a very good espionage agency to determine where the homeworld is.

Do you have any plans to give the espionage against an empire a slight boost after you've occupied one of their colonies?
Click to expand...

Happy and Relaxing Holidays to you!
Expand signature
Before you can define your strategy, you have to have a vision
Reactions:

My wish for 2021 is a covid cure and stellaris devs focusing on fixing and balancing already existing features instead of constantly adding new broken stuff.

I guess we would get rid of mask long before WoH fixed
Reactions:

To be more cynical, it kind of sounds like almost the entire team is turning over, which I suppose explains why there hasn't been that much relative change in Stellaris versus the other Paradox franchises. I guess I'm hopeful that the job openings mean that there will be fresh blood and hopefully more Stellaris in the future.
Expand signature
*grumbles about work*
Reactions:

Need anyone to make the tea?
Reactions:

grekulf said:
If any of those roles sounds interesting and well-suited for you, or if you know someone who might be, please don’t hesitate to apply!
Click to expand...

What I would love to do is form an industry collaboration with Paradox Interactive. I think there are some legitimate research questions that could be interesting with respect to video game artificial intelligence. Paradox gets improvements to AI that would be both practical and effective (and I think from a marketing perspective being able to say that your AIs use real-world algorithms and were developed in conjunction with experts from the University of X is valuable). I get to publish papers. And I am dead serious about this. If this is of interest to you or the executives at Paradox Interactive then message me, and we can see what we can work out. I can send you my CV and some of my thoughts. To preserve my anonymity, I do not want to put such things in a post.
Reactions:

Spy actions to forment unrest or alter population faction preference is maybe ok if there is a back and forth between the players involved (counter intelligence), but please no exploding starports at a button press. There's gotta be a way to fight back.

Very interested (and hopeful) to see if the espionage update will change how machine revolutions and resistance fighters work.
Last edited: Dec 17, 2020

Please tie espionage and intel closely to the ethics of both the target nation and originating nation. This should give us good flavor and keep things from happening that would not make sense based on one nation or the other's ethical disposition.

I am still not convinced a spy system is a good addition without a prior internal empire rework. Ethic drift within your empire, unrest problems, rebelling planets and entire sectors declaring independence as well as spies influencing your goverment could work really well, but the game doesnt have a basis for that yet. I doubt reworking that and adding a spy system is possible within the next major update. Otherwise spies can just gather information and do annoying things to the player, the later a lot of people dont want to be part of a spy system.
Reactions:
X

Any chance you'd be interested in a very low level programmer who is willing to learn and try hard and knows how to google for minimum wage or so? Pls pls consider. I desire to assist.
Reactions:

I feel like espionage has never really worked in a PDX game and I'm not sure that will change. EUIV is the closest but it's still a lot of micro without a ton of benefit, and I hate the system in Hoi4.
Reactions:

Despite of this jobs being mentioned at https://career.paradoxplaza.com/ you still posted 'em in Stellaris. Seems fishy IMO.
Expand signature
Battlecruiser operational.

See some non-English language, written by me as English? Want to correct me? Just. Do. It. 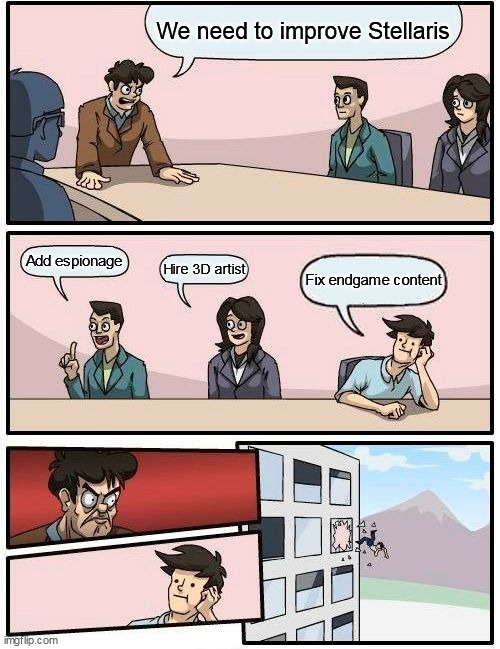 well.... strafing attacks incoming
Expand signature
Victory, we fight to win!
Victory, is ours again!
We are the scourge of the land and sea,
Beastly pirates are we!
Reactions:
G