My name is Fredrik Toll, and I am the Art Director for Stellaris. For this week's dev diary, we will have a look at how we develop our characters included in the Necroids Species Pack.

Finding ideas
Much like when we design the ships, we start out with reference gathering, finding anything that inspires us visually. We gather everything we can find that fits roughly within the theme. In this case it was everything from Venetian masks, Egyptian mummies, Mexican makeup from Día de Muertos, wraiths, ascended energy beings, vampires, dark elves, and of course skulls. We are looking to find as many different ideas as possible.
Once we feel we have enough, we look at what we have, discuss them and put them in clusters, things that relate to each other and might be an idea for a species. We want each species to be as different from each other as possible, as well as trying to fulfill as many different player fantasies as possible.

On of the things we do to add depth to the ideas is we try to come up with a backstory for each of the, to explain a bit more what they are. Does not have to be that detailed, just something to give some context, and adds details, and helps the artist when they paint them, drawing on their history.

A backstory might be something like:
“A species which inhabits a completely sealed suit which they can never leave. You can see through the transparent helmet that whatever they once were, they are a hollow scare version of that.”
“An alien that has kept itself alive through genetic manipulation, the cells no longer die, they just keep dividing. The body has grown uncontrolled and looks weird / mutated.”

Developing ideas
So once we have settled on the 15 or so idea’s we need, we start sketching out various ideas. For the initial ones we usually just do line art, sometimes rough shading, it depends on the artist. We always develop at least 3-4 different versions of each character idea before going ahead and developing it further.
Here are some of the early look dev for some species.

After the sketching phase, we use much the same process for developing aliens as we do for ship designs. We start out with rough sketches for the ideas, to see which path we want to go on. Then we choose the one we think has the best potential, develop it a bit further, trying different sub variants / poses. Once we are happy with the idea and its structure, we usually do a color test, look at different ways we can shade them.

Here is an example of what all this looked like for the aforementioned alien which extended life through genetic manipulation. 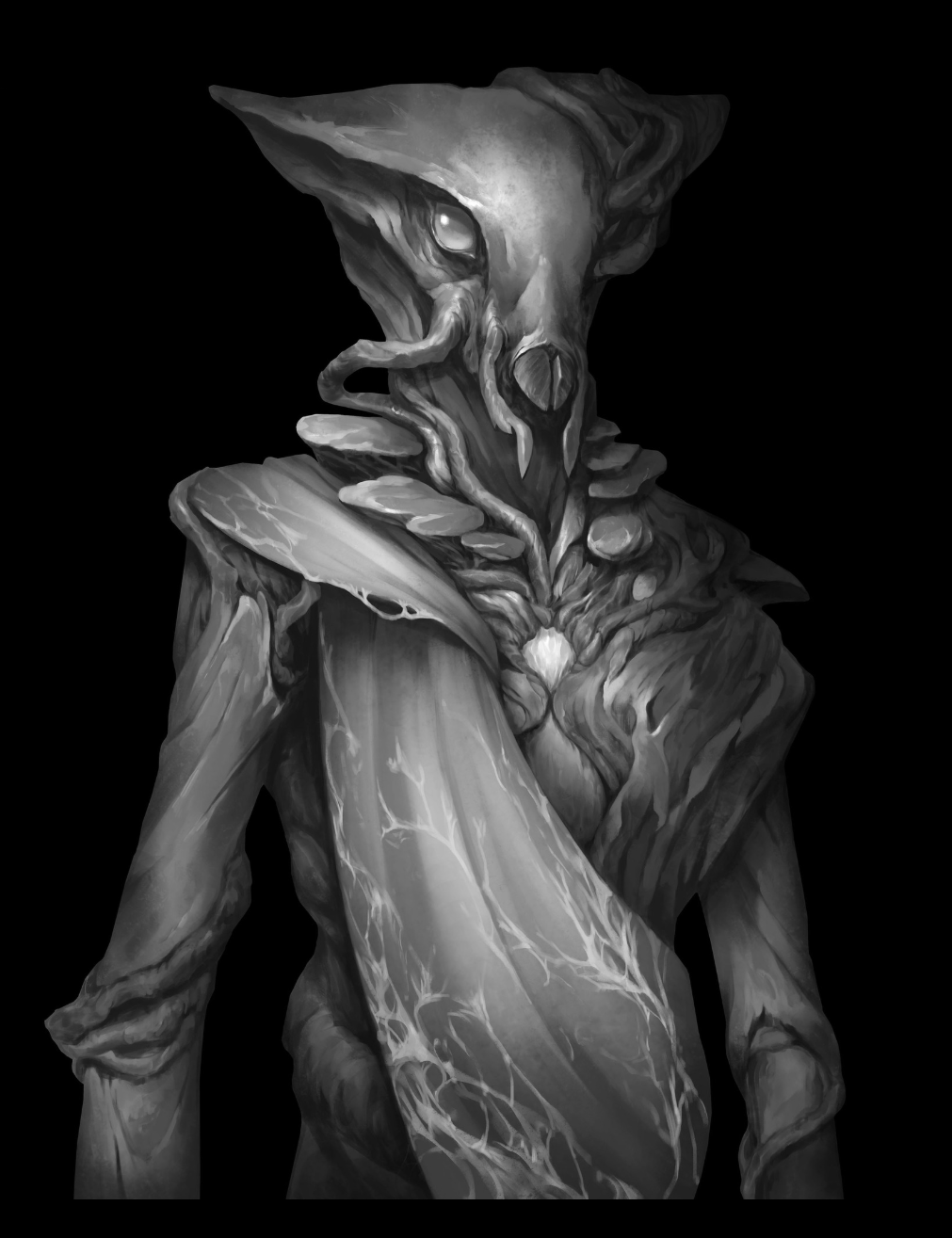 3D Characters
Even though the characters are done in 2D, and look like it in game. The way they are made is technically in a 3D software. To do this, the character needs to be split into layers. So before rendering all the details, we split them up into the components they need. Tentacles might be several layers, eye lids, arms etc, anything that moves needs to be on a separate layer. By splitting them up early, the animator can start setting them up with the rough version. While the 2D Artist continues his work on the details. This also enables us to catch any issues with the character earlier. 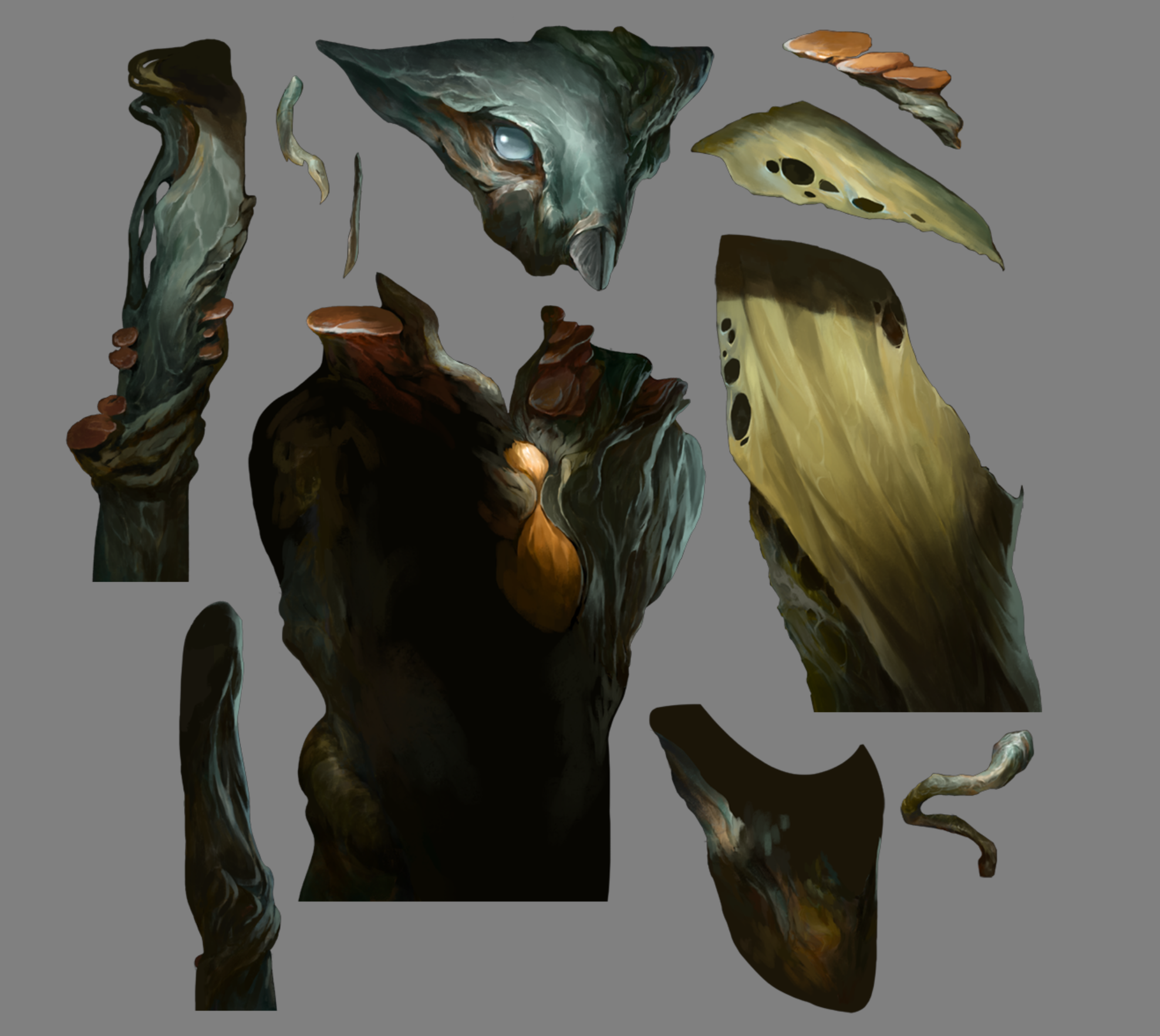 Character in 3D in perspective view 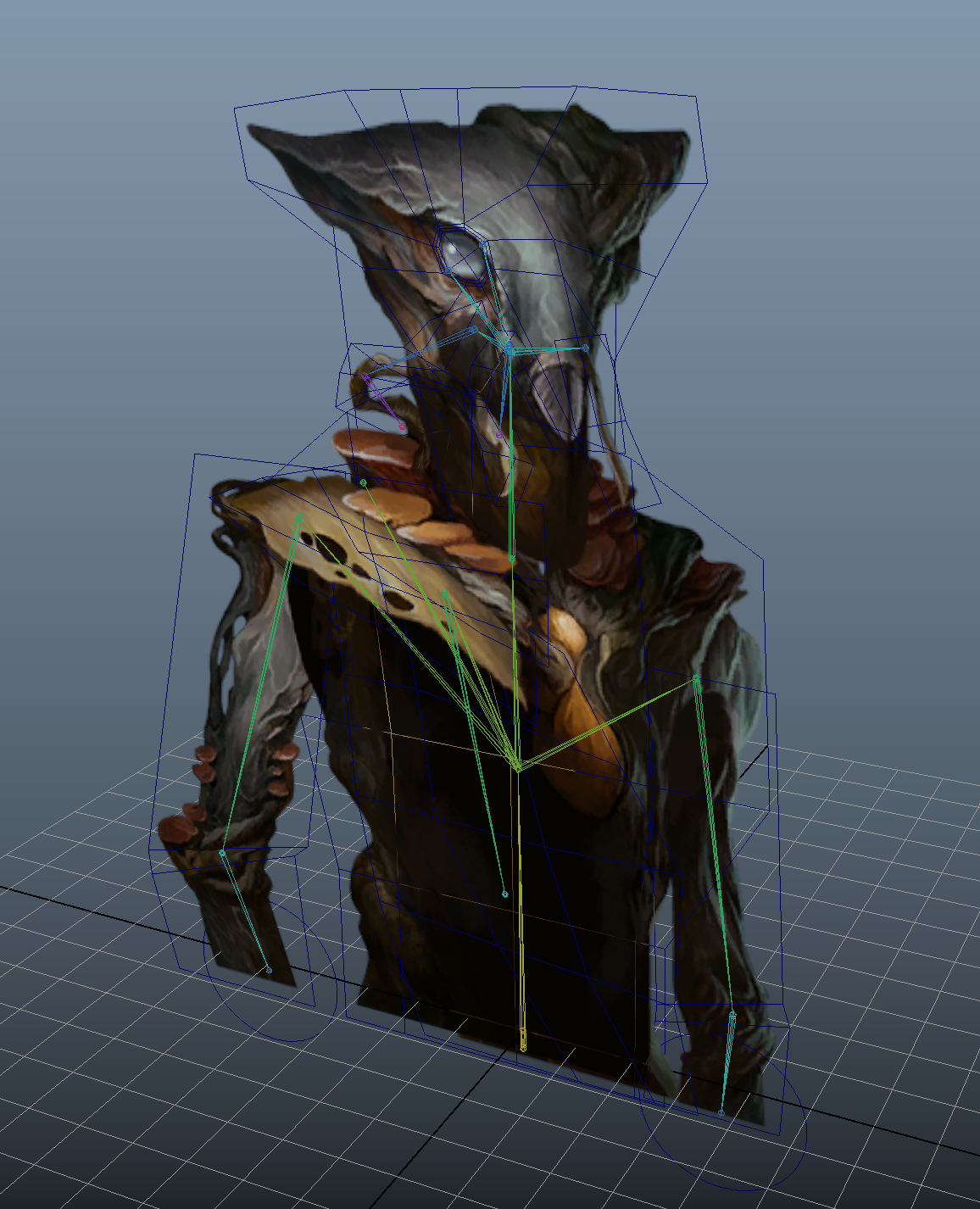 Example of what the character looks like in Maya, all set up and rigged.

So once the color test, and layer split is done, we can finally move on to the final render. This is where most of the work comes in, making it feel more 3 dimensional, making sure the materials look realistic. 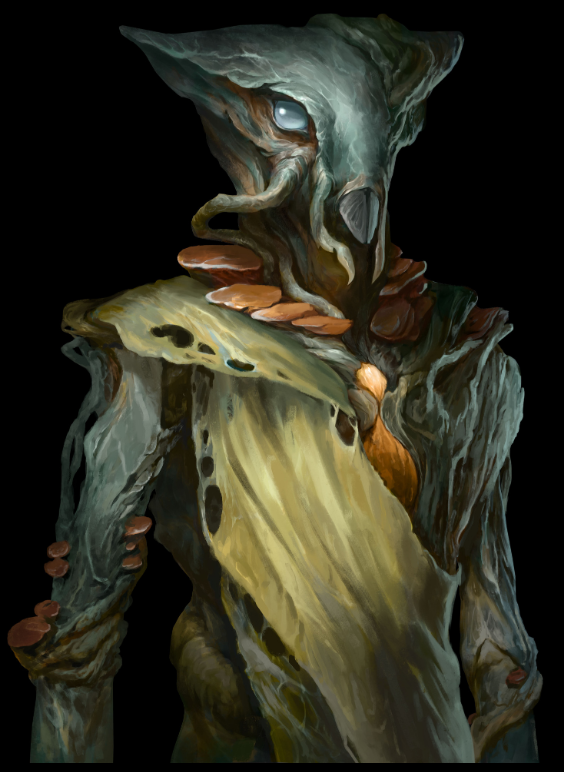 That is all for this week. Next week we'll be posting the patch notes that you may have seen on our social media.

Keep an eye on our social media channels where we will be posting some more of the portraits.
Expand signature
Ask nicely, and I will see what i can do.
Reactions:

Art look really good. I can't wait to check it out in game.

Any possibility of an update on the release date?
Reactions:

Ok, my first impression as Necroids was annouced was sceptical. Than the shipset came and i was impressed. Now...im absolutely sold!
Expand signature
Mind over Matter

CosmonautNinja said:
Any possibility of an update on the release date?
Click to expand...

Usually patch notes are posted a week before release.
Reactions:

Magnificent work, I look forward seeing the rest of the portraits in their entirety!
Reactions: 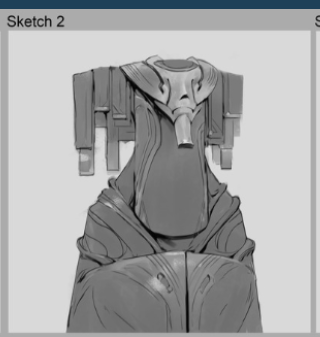 Looks good. Can't wait to check them out in game.
Reactions:

While this is all interesting. I am very glad I play on console these mini dev Diaries must be very frustrating for long time Stellaris players
Reactions:

Art looks cool as usual. Great work. But, yeah we still waiting for patch notes, bugfixes and improvements for the game.
Expand signature
"It came to me when I tried to classify your species and I realized that you're not actually mammals. Every mammal on this planet instinctively develops a natural equilibrium with the surrounding environment but you humans do not. You move to an area and you multiply and multiply until every natural resource is consumed and the only way you can survive is to spread to another area. There is another organism on this planet that follows the same pattern. Do you know what it is? A virus. Human beings are a disease, a cancer of this planet. You're a plague and we are the cure."
Agent Smith
Reactions:

GuildenSpur said:
Nice although I'm more interested in knowing what direction Stellaris is going to take, what will be fixed etc.
Click to expand...

Well, you can see the pages of the patchnotes on the twitter. The patchnotes are really long, like 5 pages long, which means, either a lot of new game features, or bug fixes. New civics and origins shouldn't take up too much patch note space, I think.
They did not talk much about fancy new game mechanics, and the changes to modding has been good, but not overwhelming. So, I am optimistic for a large amount of bug fixes, and optimizations for the next update.
Reactions:

GuildenSpur said:
Nice although I'm more interested in knowing what direction Stellaris is going to take, what will be fixed etc.
Click to expand...

EhWhoAmI said:
So, I am optimistic for a large amount of bug fixes, and optimizations for the next update.
Click to expand...

I hope your right, if the crisis AI is fixed (or any other AI), I might think to buy this new DLC.
Expand signature
"FLESH IS WEAK, METAL IS ETERNAL"
-Determined Exterminator Central Node- 2201 - 08 - 21​
Reactions:

If those patch notes are meanigful in any way, doesn't Paradox team think it would be a much better PR move to talk about them, even in general, earlier? People would be much more welcoming of the new DLC as well as art dev diaries.
If you already have them prepared, it seems either a really bad PR decission not to talk about them at an earlier stage, or nothing of importance is actually fixed, despite the lengthily patch notes.

Unless, i'm mistaken and it's actually a great PR stunt, where everyone expects the game to remain in its current state, but just before release you will do a surprise "hey, we fixed everything!" miracle, and people will be so surprised, they will auto buy any DLC.

Joking aside, I think, in terms of marketing, positive hype is always better than last minute surprise. Even if everything got fixed, leaving that for the end might mean you already lost quite many people who would otherwise kept following the development.
So all in all, with how little is publicly known about the patch, I don't think PR is to blame and my money is that there is nothing major fixed in the patch notes. The length of patch notes does not equate to quality.

My hope is I'm wrong, but I'm also tired of hoping to be wrong every time a patch comes out for the last 2 or so years, but turning out I was right in my doubts and lack of trust in PDX.
I hope you can prove me wrong this one time.

EDIT:
I'd like to add that I feel sorry for the Art team. So much hard work not getting the proper spotlight and recognition it deserves. It's obvious that all the negativity surrounding latest dev diaries is not directed at the Art team. I think it's not directed against any particular team, rather it's directed at the situation we ended up in. Still, it's frustrating probably for both PDX employees as well as players.
Last edited: Oct 15, 2020
Reactions:

I’ve always appreciated the 2D art of Stellaris. It’s one of the things, alongside with the tongue-in-cheek writing, that gives the game its character. It is strange, however, that we don’t have any DD about the oh-so-juicy bug fixes in the “best patch ever”.
Expand signature
My AAR's at Paradoxplaza:

Lord_Gong said:
While this is all interesting. I am very glad I play on console these mini dev Diaries must be very frustrating for long time Stellaris players
Click to expand...

Been playing since 1.0 ... You nailed it. It is frustrating as it gets. (I am one of those who bitterly regret the end of assymetric FTL. Exclusion zones in planet systems would've done the trick imo)

At this point I might as well enjoy the art, stop waiting for a playable lategame that will never come ; and move to another game.
Reactions:

Laomedon said:
stop waiting for a playable lategame that will never come ; and move to another game.
Click to expand...

I wouldn't go that far. These things take time and resources and as far as we know Necroids well be the thing to provide the resources for the next big patch
Reactions:

Told you it was gonna be character portraits:

Ridixo said:
I was thinking that we probably got just three dev diaries before the release of Necroids. Portraits: All of them an how they are made. Patch: What the devs have done for us? Expect more than anything puns about the People's Front of Judea And then in the final one Patch notes: Loren Ipsum Ad Nauseam Et Fix Enim In Ludo
Click to expand...

Are there going to be portraits that look like there is something sticking out that shouldn't (I'm thinking zombies with protruding bones but in a more general way, like a visible internal organ or something)?
Expand signature
Sit now there, and look out upon the lands where evil and despair shall come to those whom thou allied. Thou hast dared to mock me, and to question the power of France, master of the fates of Europe. Therefore with my explorers thou shalt see, and with my spies thou shalt hear; and never shall thou be released from vassalage until all is fulfilled unto its bitter end.

"AI cannot do it / would not know how to do it" is not an argument against a suggestion.
"AI would have to be taught how to do it" is an implied element of every suggestion.
Reactions:
Show hidden low quality content
You must log in or register to reply here.
Share:
Facebook Twitter Reddit Pinterest Tumblr WhatsApp Email Link
Top Bottom