Zaztl’s time had come. The Ritual of Elevation was soon to begin, and as she was inching ever closer to her own final destiny, she wondered “Is this perhaps the start of a new life?”. She couldn’t help but to latch on to hope in her moment of dread, but she also knew the futility of the question.

No Jeferian would ever know the answer to that question. 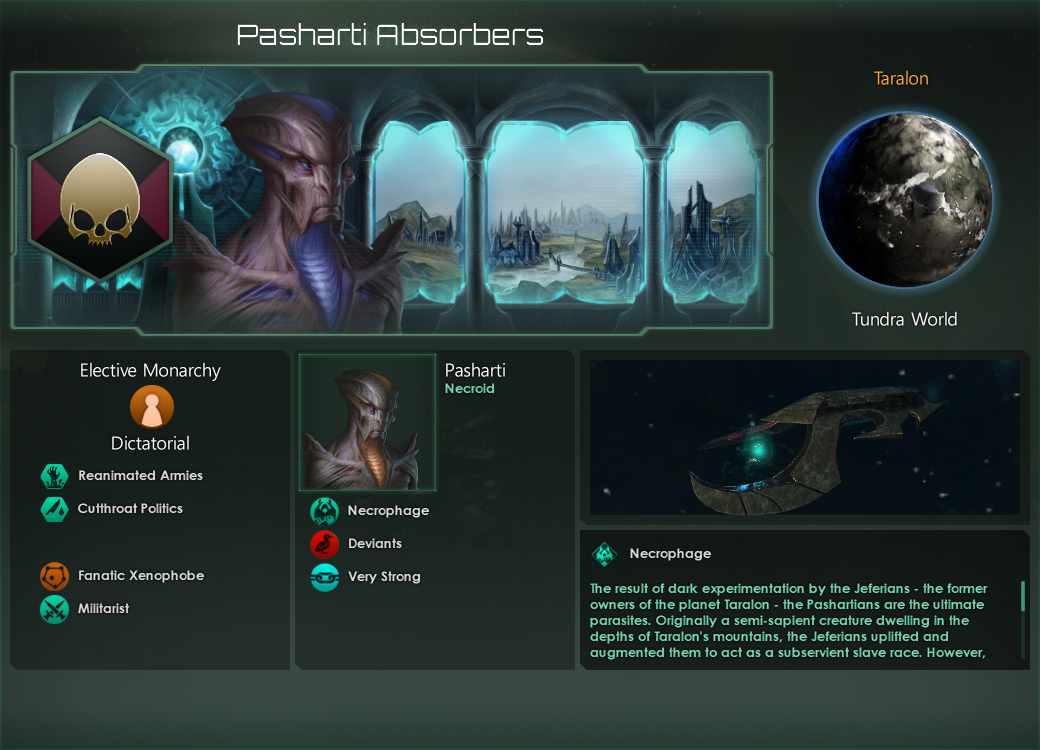 The result of dark experimentation by the Jeferians - the former owners of the planet Taralon - the Pashartians are the ultimate parasites. Originally a semi-sapient creature dwelling in the depths of Taralon's mountains, the Jeferians uplifted and augmented them to act as a subservient slave race. However, their uplifting was rather too effective, and they unleashed a monster. Horrified at the capabilities of their creation - which included the ability to absorb other sentient species and turn them into Pashartians - the Jeferians tried to shut down the experiment. However, a small group of uplifted Pashartians escaped.

Over the years, they bided their time, managing not only to evade capture, but also gradually increase their numbers and develop a technological base to rival the Jeferians. Eventually, the Jeferians noticed that something was amiss, but by then they were powerless to resist.

Soon the Pashartians had seized control of the planet, unleashing violent pogroms on their erstwhile oppressors - all the while further increasing their numbers. Now poised to take to the stars, the Pashartians stand ready to pursue what they see as their solemn duty - the conversion of all lesser life forms to their likeness.

Two weeks ago we announced the Necroids Species Pack, and today we’ll be giving you more information about the gameplay aspects. But first, I’ll take the opportunity to link the trailer once again, in case you missed it.


For Necroids we wanted to add some new gameplay that would be available to many more different types of empires and species. Unlike Lithoids, these Civics and Origins will not require you to use a Necroid portrait. For Lithoids we felt like it made sense, but in this case we didn’t want to impose any limitations on your imagination and creativity. 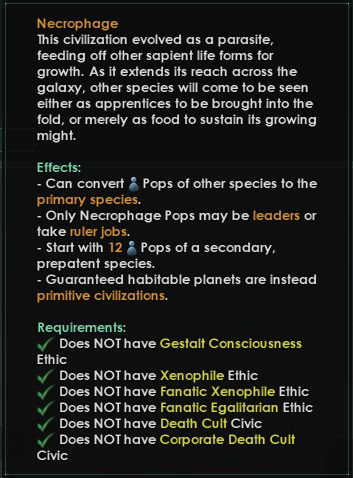 Necrophage is a new Origin that means that your primary species has a very hard time to procreate by themselves, but is instead dependent on transforming other Pops into themselves. 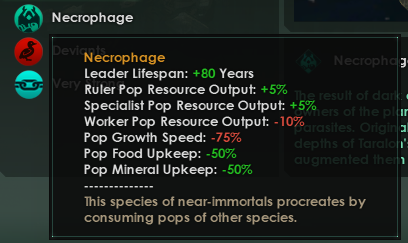 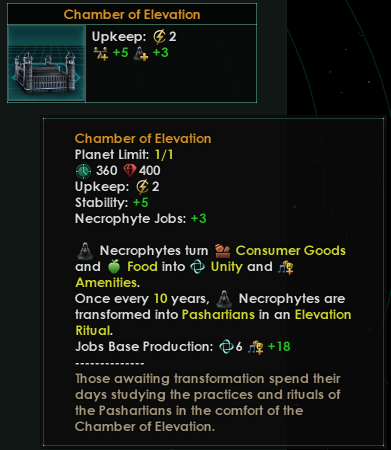 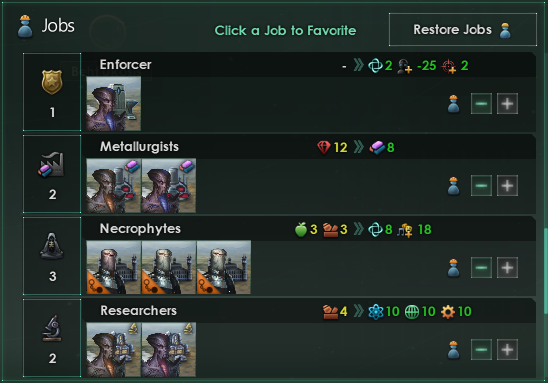 Necrophytes - Hey, what does the necro part of my job title stand for anyway?

In addition, there is also the Reanimated Armies civic that we showed in DD #185. This civic replaces the Military Academy with a Dread Encampment, and can recruit Undead Armies that are unaffected by morale. 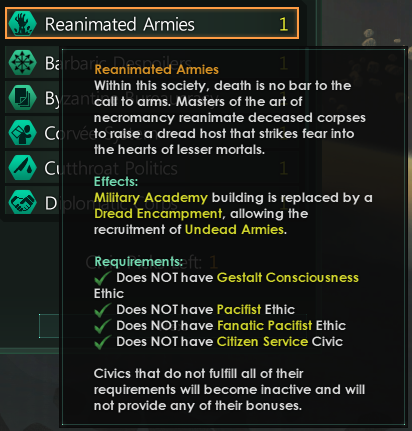 Reanimated Armies - the ultimate in recycling. 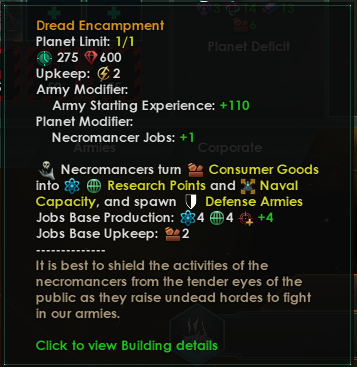 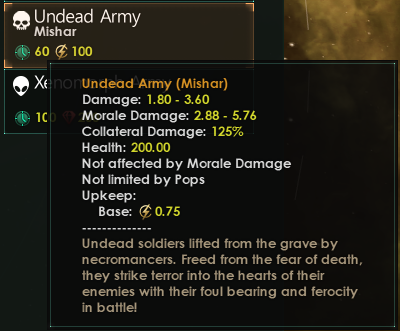 Undead Army - it’s not wight how they work them to the bone, but they don’t complain 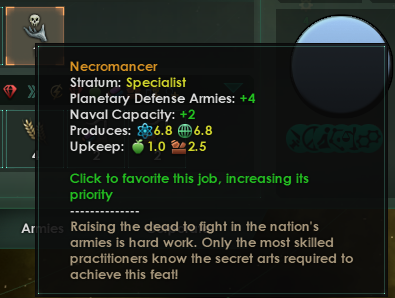 Necromancer job - some say it’s a dead end job, but they’ve made a grave mistake
(Note: Above image includes the bonus from Ground Defense Planning)

This civic has a few restrictions - no pacifists, and it conflicts with Citizen Service since it replaces the Military Academy. Some subtle differences exist between Soldiers granted by Military Academies and the Necromancers from Dread Encampments - they’re Specialist tier and provide more defense armies, provide some research benefits, and will summon additional defense armies under Martial Law instead of increasing Stability.

That is all for this week! Next week we’ll take a look at the art process and all the effort that goes into creating the Necroid portraits!

We’ll be eagerly reading your responses, and remember that... 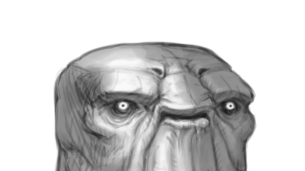 The Origin is quite cool! This will help if you have far too many species in your empire. Thank you for this piece of information!

Edit: Is there a diplomacy penalty with other empires for one or all of the new Civics/Origin?
Last edited: Oct 8, 2020
Expand signature
Mind over Matter

Won't Necrophytes lead to excessively annoying micro in many cases?

Convert a few pops then restrict the jobs in order to wait a few decades for new ones to grow (you don't want to use up all the non-converted pops, you want to breed them), add new ones to the jobs, convert, restrict job, wait, rinse/repeat...across multiple planets.
Reactions:

grekulf said:
Origins will not require you to use a Necroid portrait. For Lithoids we felt like it made sense, but in this case we didn’t want to impose any limitations on your imagination and creativity.
Click to expand...

That cool, I think to the two parasite style fungoid portrait which could be great with this new necrophage origin.
Expand signature
"FLESH IS WEAK, METAL IS ETERNAL"
-Determined Exterminator Central Node- 2201 - 08 - 21​
Reactions:

Cool.
But what we really want is this race : 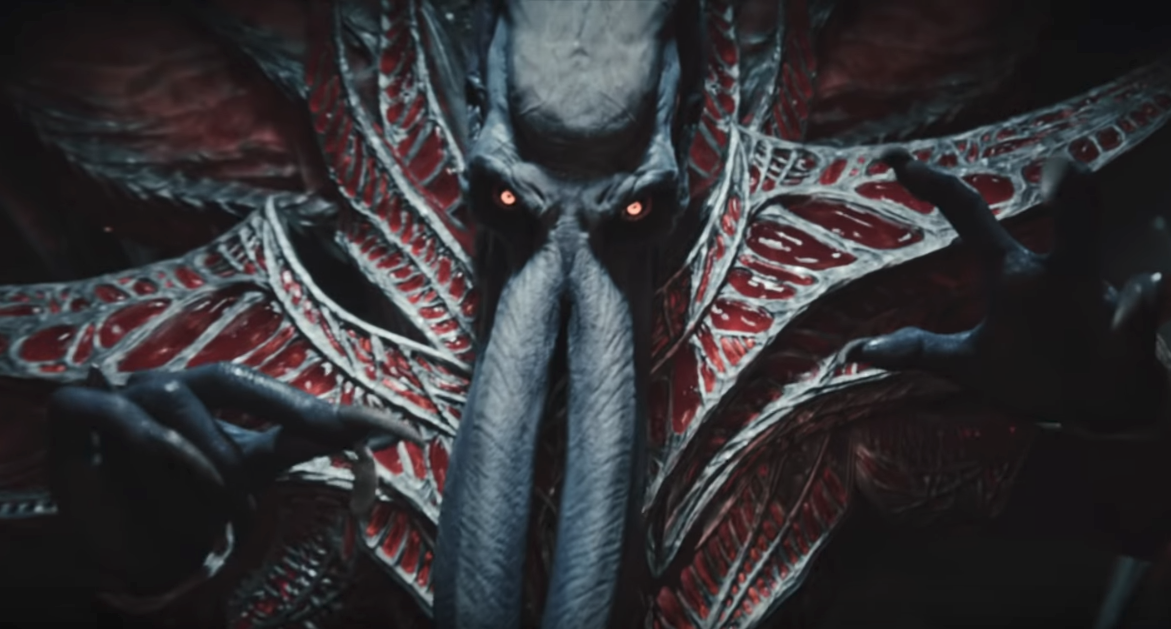 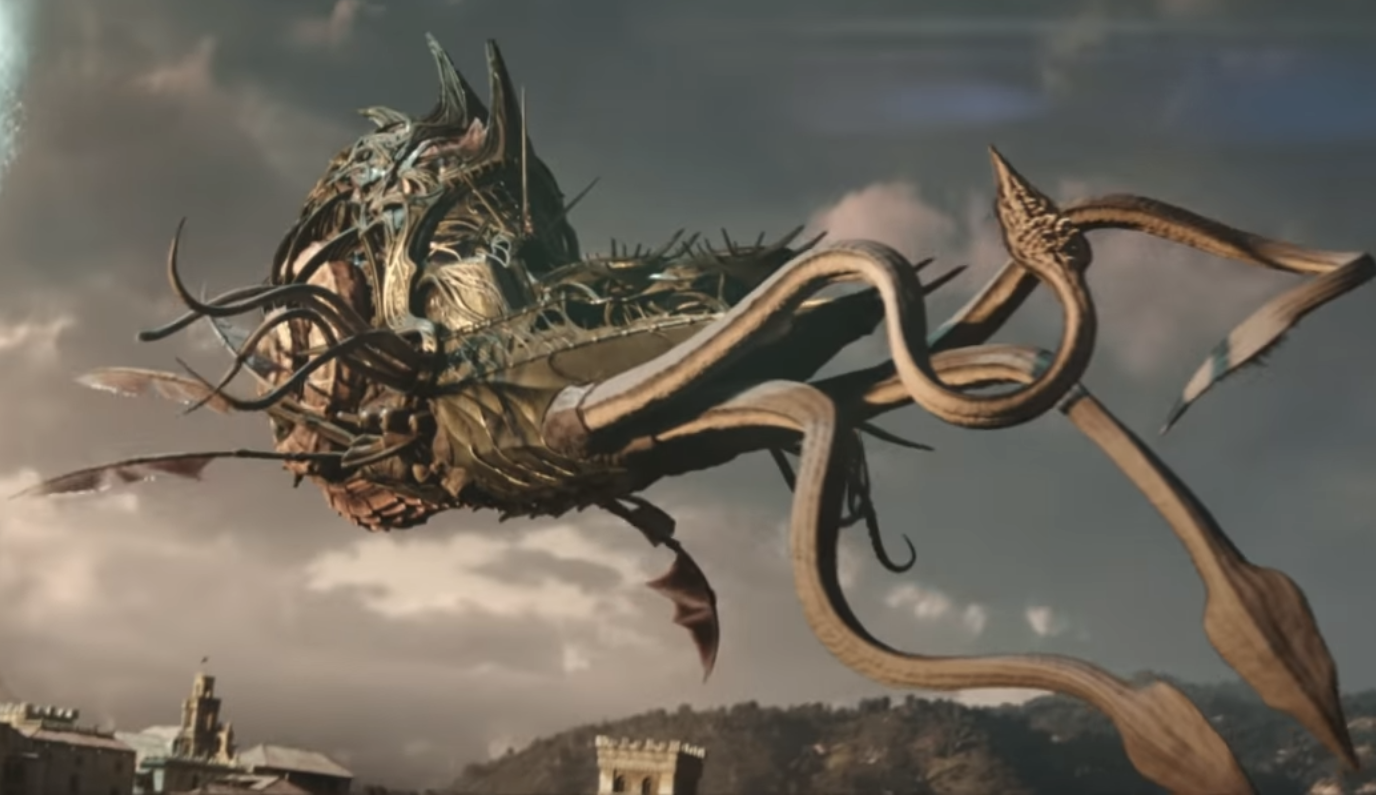 grekulf said:
We’ll be eagerly reading your responses, and remember that...
View attachment 638700
Jeff sees all
Click to expand...

Oh boy do I hope this means that the others issues we're complaining about would also be addressed in the next patch...
Reactions:

So nothing about the patch...
Last edited: Oct 8, 2020
Expand signature
"It came to me when I tried to classify your species and I realized that you're not actually mammals. Every mammal on this planet instinctively develops a natural equilibrium with the surrounding environment but you humans do not. You move to an area and you multiply and multiply until every natural resource is consumed and the only way you can survive is to spread to another area. There is another organism on this planet that follows the same pattern. Do you know what it is? A virus. Human beings are a disease, a cancer of this planet. You're a plague and we are the cure."
Agent Smith
Reactions: 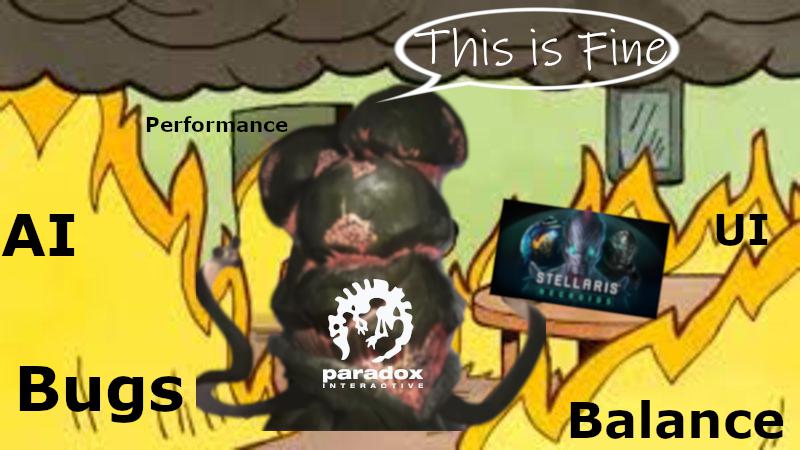 I do hope that you can build that convert building everywhere and that it's not retrcited.
Would be a lot of mirco resettling all those slave pops.
Expand signature
Where There's a Whip There's a Way!
Reactions:

Isn't "Post Mortem" refered to the current state of the game?
Reactions:

Is the origin ethic restricted? (so no pacifist Xeno loving space vampires?)
And can the Necrophytes job be filled by all strata (turning livestock into people for example)
Expand signature
Where There's a Whip There's a Way!
Reactions:

Any sort of information on the beta branch fixes that had been alluded to previously?

I appreciate the art and the species, but it would be nice to see some specific concerns addressed.
Reactions:
B

I’m still holding out hope that Jeff is a fish boi and they’re secretly gonna drop an aquatic species pack next to this. But I’m liking the look of the necroids. It will be good to use the origin on old empires I’ve lost as.
Reactions:

I still think necrophages are a dumb idea but hey at least the portraits are cool.
I mean how would a species which require other intelligent species to reproduce ever survive long enough to reach the stars?
Expand signature
Baal: You can't be serious.
O'Neill: Yes I can... I just chose not to.

Turnil said:
I do hope that you can build that convert building everywhere and that it's not retrcited.
Would be a lot of mirco resettling all those slave pops.
Click to expand...

You can only have one per world but it converts every 10 years so you only have to make sure you have at least 3 available after each elevation.
Expand signature
Deus Vult. Oden Vult. Zeus Vult. Kek Vult.
Is that triggering enough for you?
Reactions:

I've the urge to let out the hollowing screams of the Warcraft 3 ghouls when they rush down an ennemy heroe.

Making this incompatible with gestalt is a sin tho, i hope you have plans for the forgotten queen mod for making such move.
It just toke some number tweaking here and there c'mon.
Expand signature
"Initiating useful link.exe"
Civic Tier List (Single player 2.6.1)
I made some pretty neat combat overhaul ideas please notice it T_T
A useful hivemind playthrough(slightly outdated)
A useful hivemind guide(slightly outdated)
Improving Gestalt Civic
Reactions:

TheDungen said:
I still think necrophages are a dumb idea but hey at least the portraits are cool.
I mean how would a species which require other intelligent species to reproduce ever survive long enough to reach the stars?
Click to expand...

So, are you guys going to address:

- Broken Crises AIs.
- Broken AE AIs.
- Broken AIs in general, where FTL Inhibitors seem to be one of the main causes.
- Absurd Micromanagement of planets being required. Which could be partly resolved by making "Greater Than Ourselves" a baseline edict?
- Pops growing endlessly, where one has to manually stop growth. Rather than having a way to limit them to "a bit over jobs/housing" and automatically resume growth after they move out.
- Performance drops even on high-end PCs, where further upgrades become pointless as it's the engine that can't cope anymore.
- Performance likely partly being due to pops growing endlessly. As AI Empires end up with absurd numbers of unemployed pops. Synth ascended Empires for example will never stop growing pops on their planets.
- Etc.

Edit, you guys also once talked about a "Capture/Steal Relic" war goal if enough interest existed. That thread alone showed enough interest, it would especially give a goal in the mid-game. What happened to that?
Last edited: Oct 8, 2020
Expand signature
"Because we bought a product as it is. If you buy a product and you don't like it, you return it. You don't go to the factory asking them to change it to fit your whims." ~ Rhayader
Reactions:
N

I like the rp potential, but I feel that Necrophage would be better as a Civic or even simply a race/species trait rather than an origin. I think this only because the way the origin is worded and abilities seems quite similar to the Lithoid Trait.

That being said, my mind is already running rampant with build and rp ideas. I have also been working on a vampiric race for a setting so the Necrophage Shenanigans will be strangely fitting.
Reactions:
Show hidden low quality content
You must log in or register to reply here.
Share:
Facebook Twitter Reddit Pinterest Tumblr WhatsApp Email Link
Top Bottom