My name is Fredrik Toll, and I am the Art Director for Stellaris. For this week's dev diary, we wanted to give you an insight into the development process of creating the ships for the Necroids Species Pack.

Let’s dig right into it!

Designing a new Ship Set
After settling on the theme, the first thing we do when embarking on designing a new ship-set for a species pack, is going through the core ideas of the species pack with our internal team of concept artists. In this case it was centered around the theme of death, and the various species who have cheated it. After the brief, we had everyone write down their association and ideas for this theme to know what everyone is thinking. This allows us to align more what it’s all about, share ideas, and inspire each other. By doing that we are able to highlight what is more important and what does not fit with the theme.

After this we do a search for visual reference to use in the concept process. These can be anything from patterns, statues, tiny objects, to buildings, whatever inspires us visually in connection to the theme. We look mostly for shapes, but also materials. Architecture is usually a great source of inspiration, they have great shapes, and a scale suitable for ship details. We try to avoid using other existing ships as reference since we want to develop something original, not just a variant of others, though they can still be a reference, if only to show what we don't want.
For Necroids we looked a lot at Art Deco and brutalist architecture, tombs, pyramids, as well as skulls, fossils and many other things. After reviewing and discussing the references we start sketching, going wide, anything goes. Sometimes they align a lot with our references, other times ideas come from nowhere, it’s all part of the process. This leads to a whole lot of Ship designs ideas. Here are a handful of those. 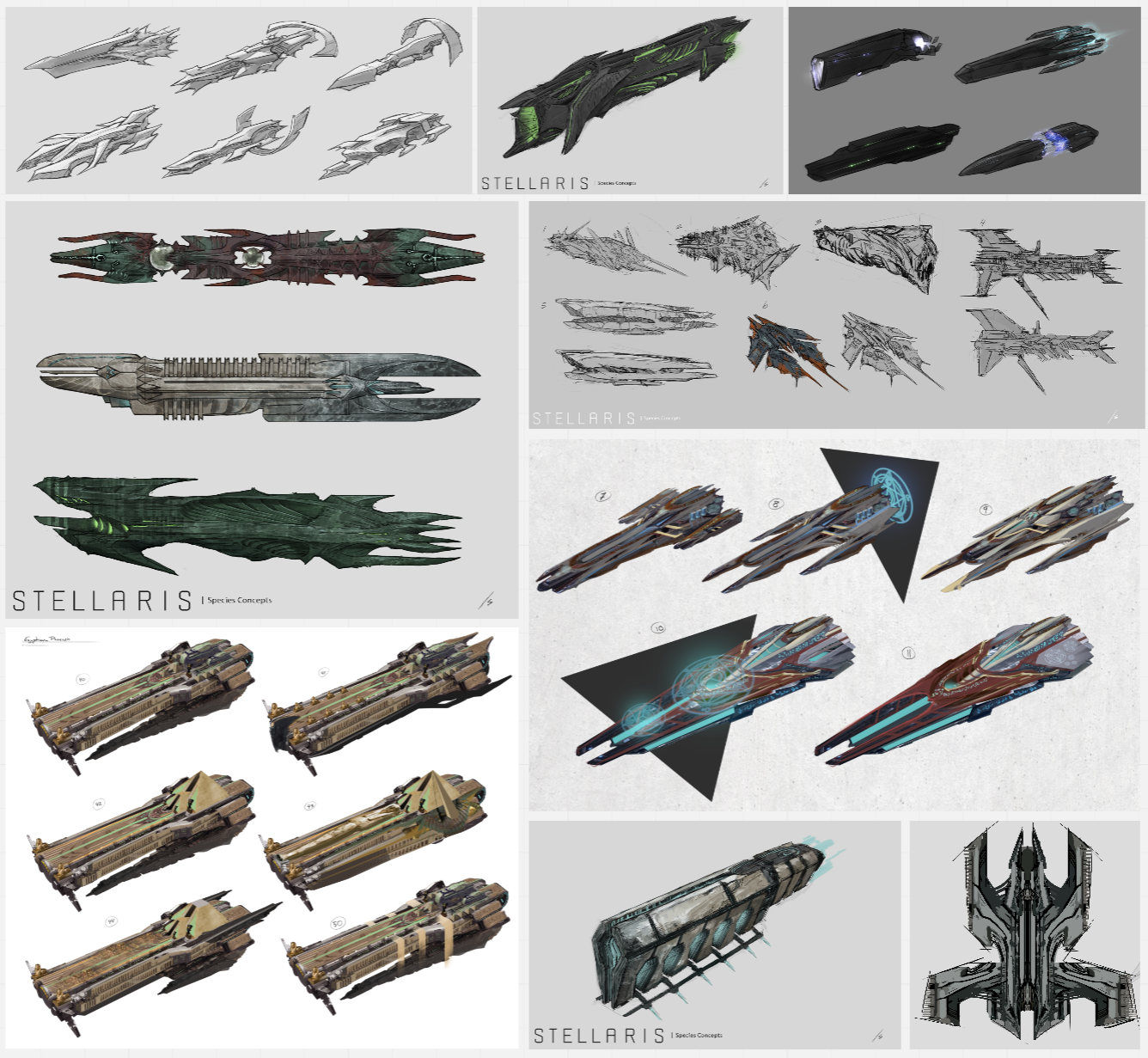 Ultimately we settled on these two references as our direction. They felt like something far away from existing ships, as well as fitting well with the theme. 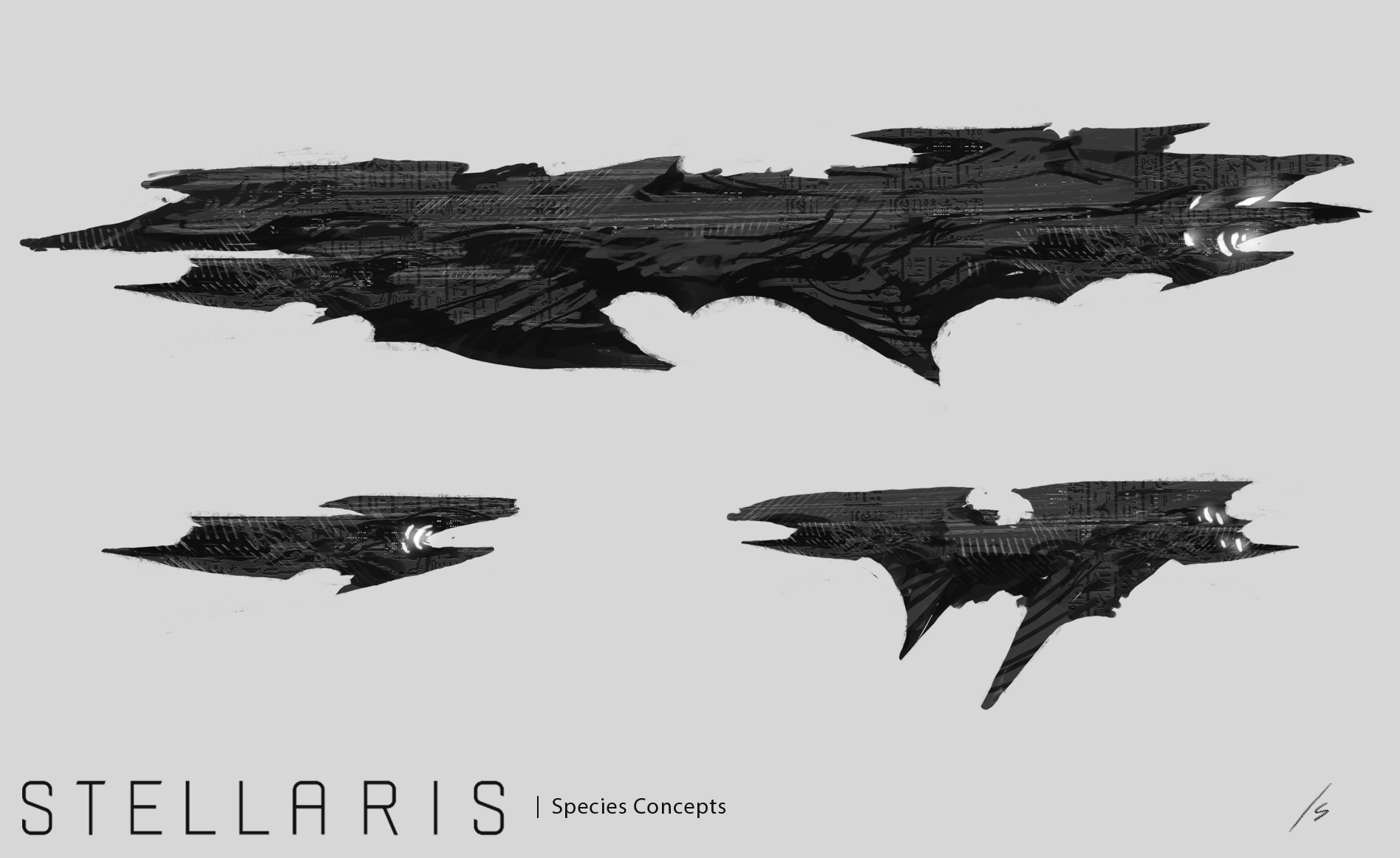 Developing the Style
These ships are only the start though. Once we have chosen one of the styles we did in our initial look development. We have to flesh out what those mean. These are just side-views, they do not tell you everything you know, in fact, opinions of how to interpret it can differ significantly. So we need to figure that out, as well as adapting it for the demands of the game, such as having sections, having turrets etc.

Usually we start with the Cruiser, since it’s a good mid-size ship close enough to all ships sizes that it’s relevant for all designs. You also have a fallback option, if it turns out that it looks too big, you can just use it for the battleship. If it turns out too small it will be the destroyer or corvette. Here you can see a few of the concepts from the process. It looks pretty straightforward, but it takes a lot of back and forward before we nail it down.

Creating the Concepts
Once you have the style narrowed down, it’s time to make all the actual concepts for each and every ship. Even though the style is figured out, each ship is a bit unique and each of them present new challenges, and new parts of the style to figure out. The civilian ships are different from the military ships. Each of the military types ships has a different size, and the style differs significantly from the corvette to the juggernaut. Each of the civilian ships has a very unique design and they have more in common with some stations than they do with each other. The construction ship and the mining station often share traits, as do the science ship and the research station.

Here are two different examples.
The science ship for instance, has a much more high tech appearance than the other ships. The process is made easier though from the work we have done on previous shipsets. Some standards have been set, the science ship for instance usually has a more “cool” appearance with a more streamline almost racing type ship. This helps us know where to aim, and apply the style on that.
Sometimes it's pretty straightforward – Let’s take the example of the Science Ship. First we start by making a couple of rough versions, then choose one of those versions, then make some more versions based on that one. We then continue the process by once again choosing one of them, refining the details to finish the design, and in the end we create an asset sheet. The asset sheet is for the 3D artist to model, and know where to apply which material. It speeds up their work a lot and makes sure everything is consistent. 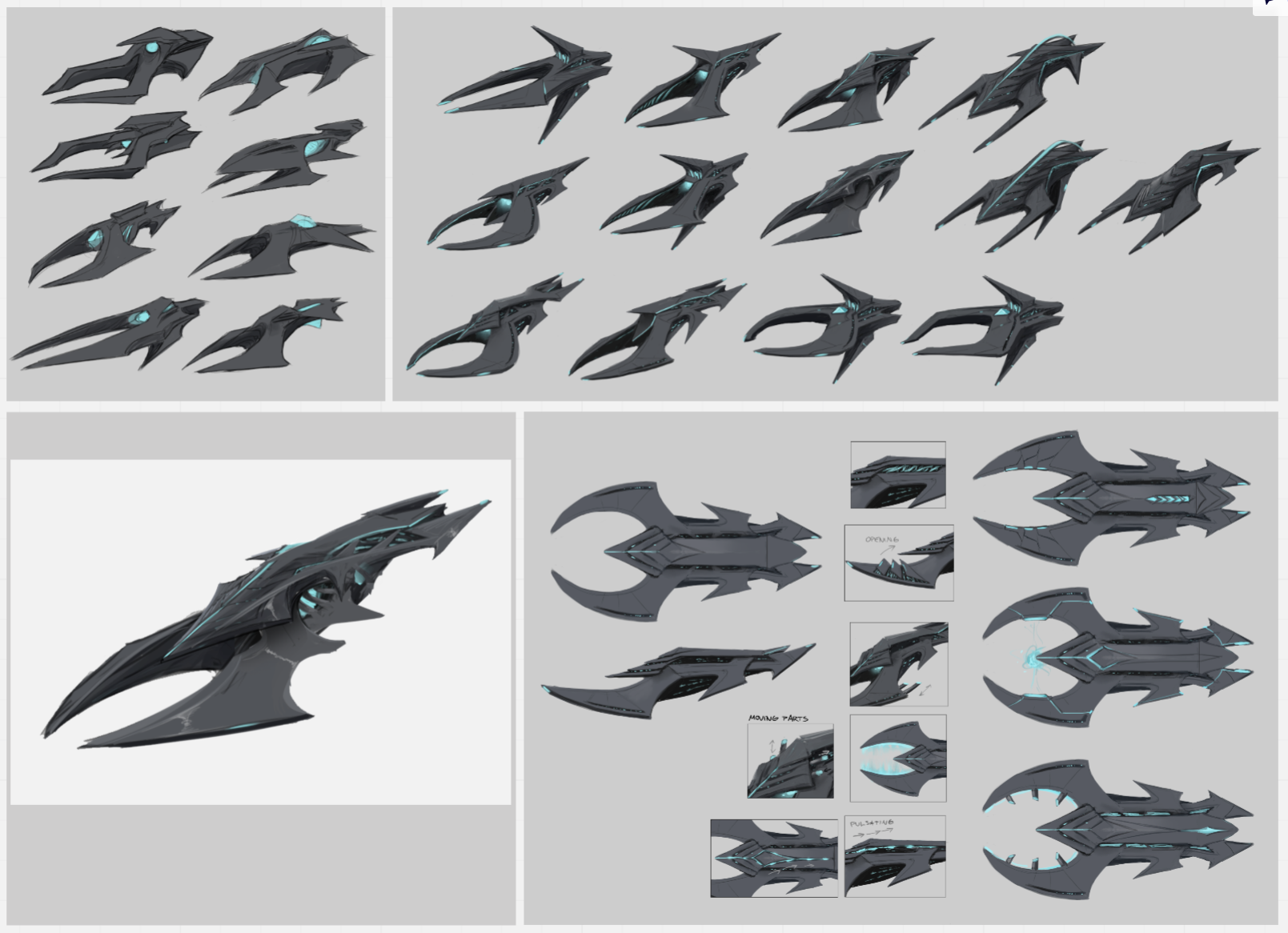 Another example would be the construction ship. They are very bulky, usually described as a cargo hold with engines, and a bridge. Here we made some initial concepts. One of them we felt looked like a good idea for a transport so we got that idea for free. 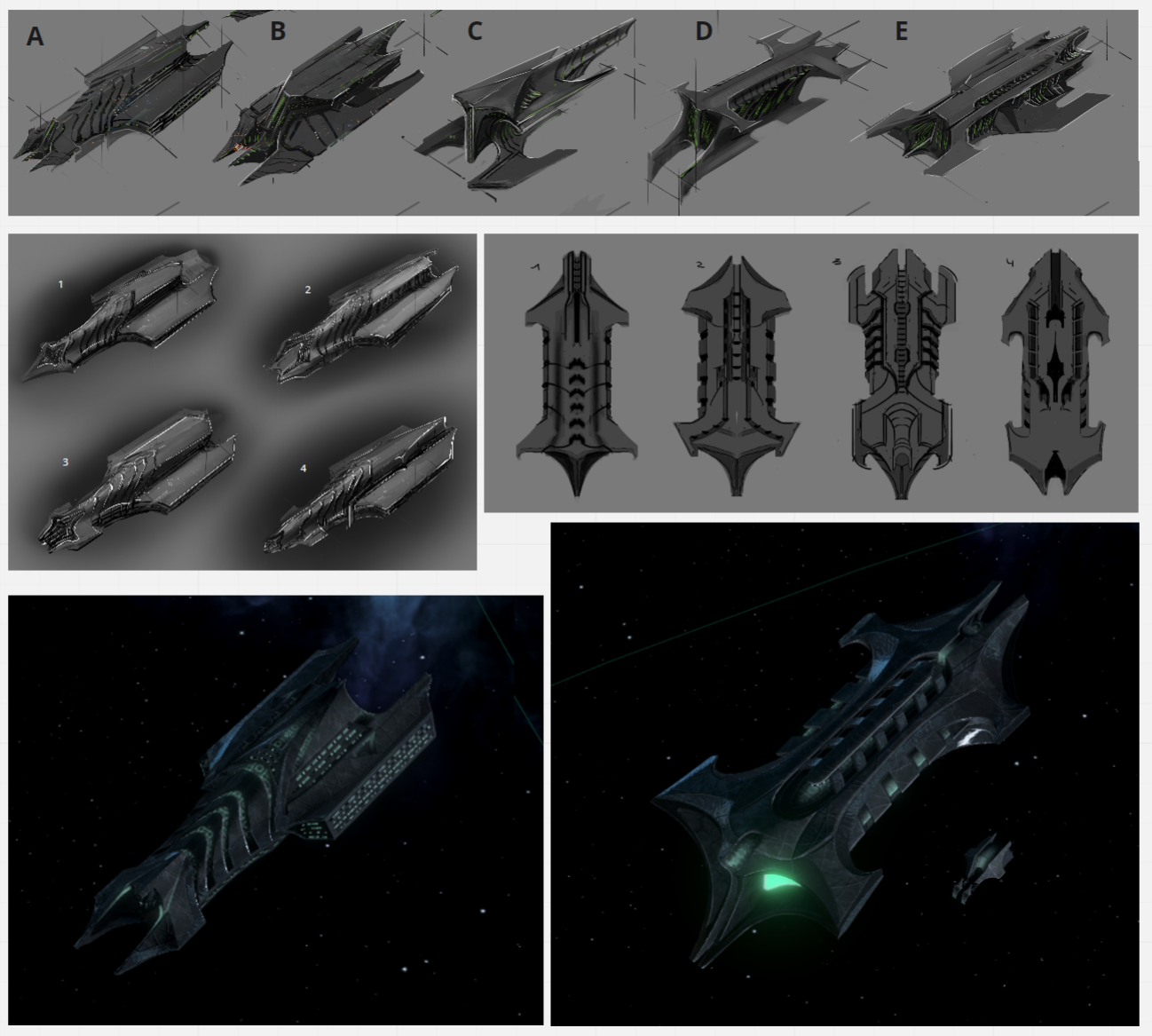 There are so much more we would like to show. But as you can see here, there are several hundred images in this process.

That being said, sometimes the concept artist uses quick 3D models in the concept art phase. Figuring out a design purely in your head is very hard. So making a rough model of your idea, then doing some paint-over on top a screenshot can save a lot of time. The difference is that these models are not fit to use in game, since they are not modelled properly or economically.

Usually we have a 3D artist join the team in the concept phase though. As soon the first ship concept is finalized and the style is set we build that ship, and start working on the materials. We do some concept work for the materials as well, but you only really get a feel for it when you can move the camera around, and see how the lighting moves across the hull of the ship.

The Final Results
Then follows several months of 3D modeling, once done, we rig them for animation, export them to the game, and add particle effects. And finally, here are some examples of the finished ships: 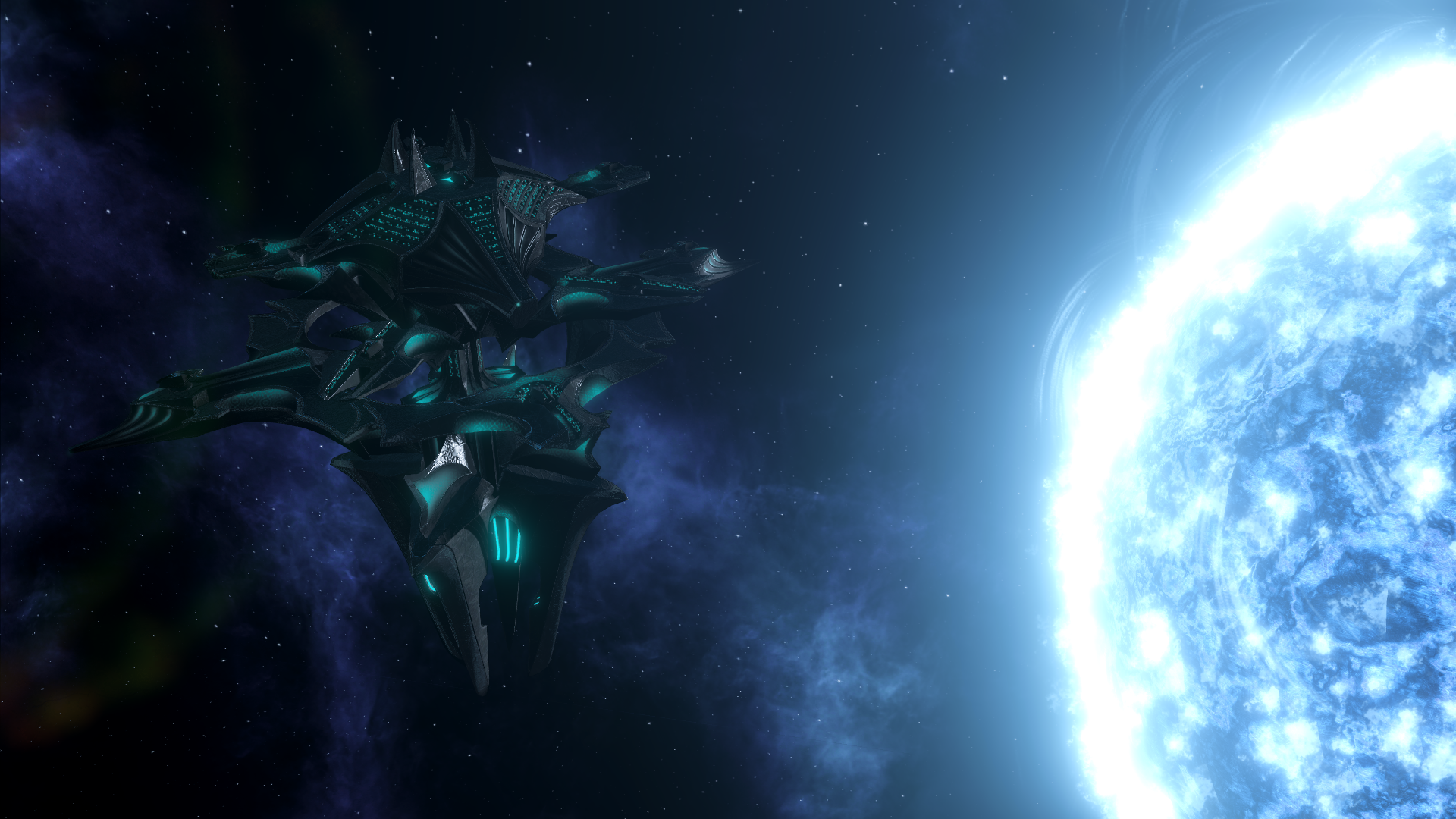 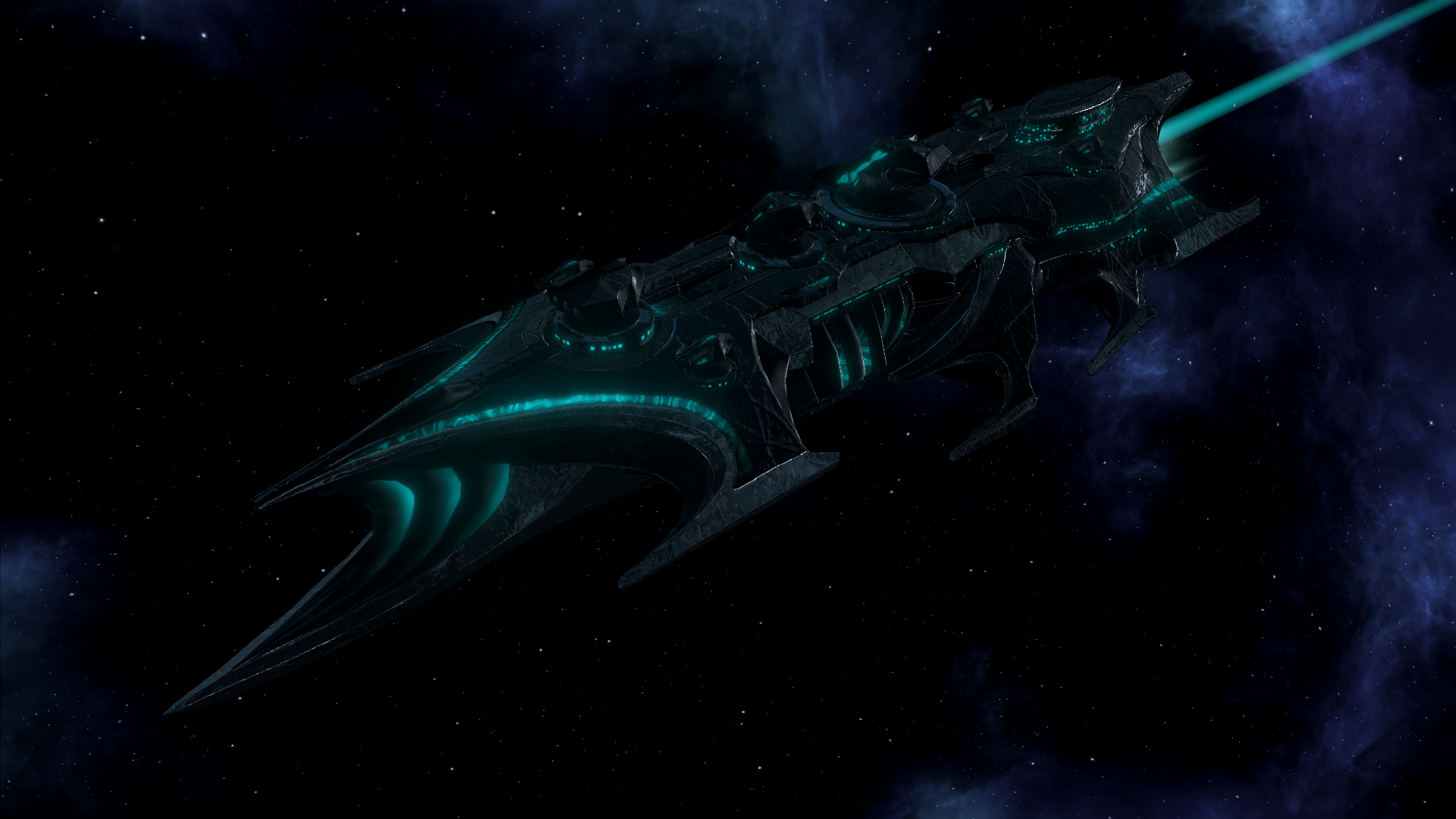 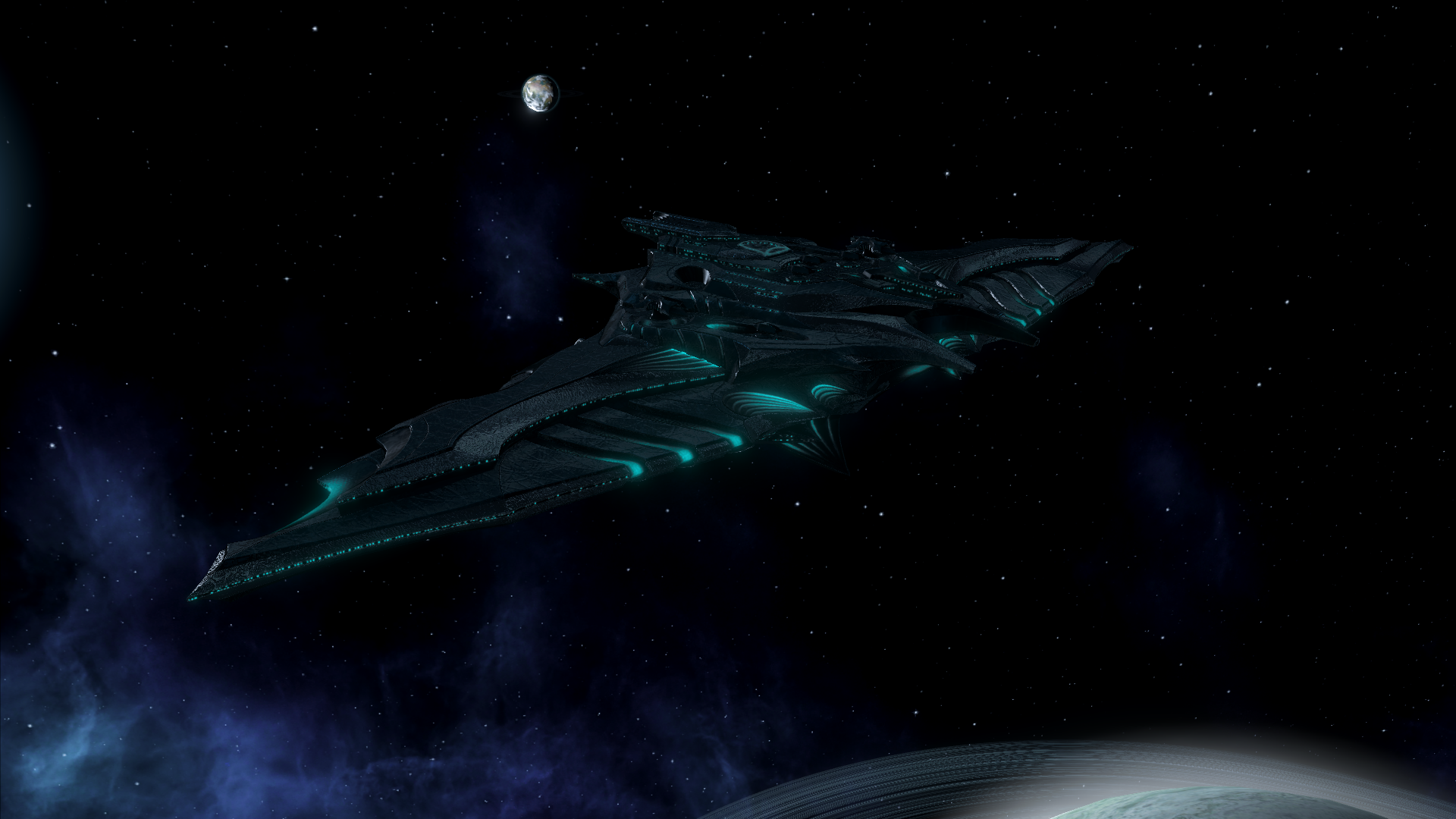 Expand signature
Ask nicely, and I will see what i can do.
Reactions:

I... I am stunned! They are breathtaking!
Last edited: Oct 1, 2020
Expand signature
Mind over Matter

Props to the art team, these look pretty good.
Reactions:

The Juggernaut must be called Batman class, everything else makes no sense.
Last edited: Oct 1, 2020
Expand signature
Sponsored by Xenonion News
Reactions:

"Quickly, show them something pretty, it will distract them!".
Reactions:

Nice art for the game and a lot of effort.
Reactions:

Very nice, thank you for your hard work.

When we will get any informations about crisis AI, military AI, performance, and other popular issues?
Reactions:

That sure is a fancy looking dark eldar shipset.
Reactions:

Well the ship set does look very interesting. I can't wait to use it for Empires that aren't Necroids
Reactions:

Guess I'm out. Was waiting to see what this week's DD was about and it's more fluff.

Nothing bad to say about the shipset, looks really awesome.
But not gonna waste my time and money on a broken game when Paradox has obviously given up on fixing it and is just trying to suck as much money out of it before everyone quits.
Reactions:
Z

Ambereyed said:
When we will get any informations about crisis AI, military AI, performance, and other popular issues?
Click to expand...

They are ... drop dead gorgeous
Reactions:

looks cool! cant wait!!!
Expand signature
GENERATION 42: The first time you see this, copy it into your sig on any forum and add 1 to the generation. Social experiment.
Reactions:

Beautiful but when is the release date?
Reactions:

I have to admit they do look great !!
Reactions:

The #2 ship in the middle-right with the ... pentagram (i guess) hyperspace graphic is quite interesting.
Have you thought about giving shipsets unique fx like different hyperspace-jump windows or different shield-shaders etc?

also the ship below it looks like it has holograms over it.

IMO it'd be really cool if capital ships (titans/juggernauts) could project a hologram entity of our empire's flag emblem off their sides,

As an aside, are there any plans to add a juggernaut model for Fallen/Awoken empires? I dont think they use that ship-class currently.. never seen one since federations came out.

Edit: Also looks like someone's been binging on Stargate SG-1