Menu
Install the app
You are using an out of date browser. It may not display this or other websites correctly.
You should upgrade or use an alternative browser.
Stellaris 42290 Bug Reports 22564 Suggestions 12761 Tech Support 2128 Multiplayer 323 User Mods 4097 Stellaris AAR (After Action Reports) Console edition 917
Show only dev responses

Due to consistently meeting or exceeding performance goals and receiving high marks from both your manager and colleagues, you have been selected for termination at the end of this quarter! Your sacrifice is greatly appreciated by all of us here at Dodacorp™, and we’re lucky to see you go!

Your manager will be in touch with you to provide instructions related to termination benefits, reallocating your Dodacorp™ retirement credits to your next of kin, and the necessary paperwork for your desired post-termination arrangements. As a valued member of Dodacorp™, remember that you have an employee discount on cremation services from our partners at Burnatech™ and don’t forget that you can claim your complementary Eternal Interment™ urn from our Repositrexx™ subsidiary.

Ask your manager about securing a spot for your urn on the Wall of Honor™, the most desirable places are going fast!

Please make sure to complete all of the requisite forms by the first of [Employee.TerminationDate.PreviousMonth] so you don’t miss this exciting opportunity.

We’d like to thank you again for your service here at Dodacorp™, and appreciate that your sacrifice today will lead to record profits tomorrow! 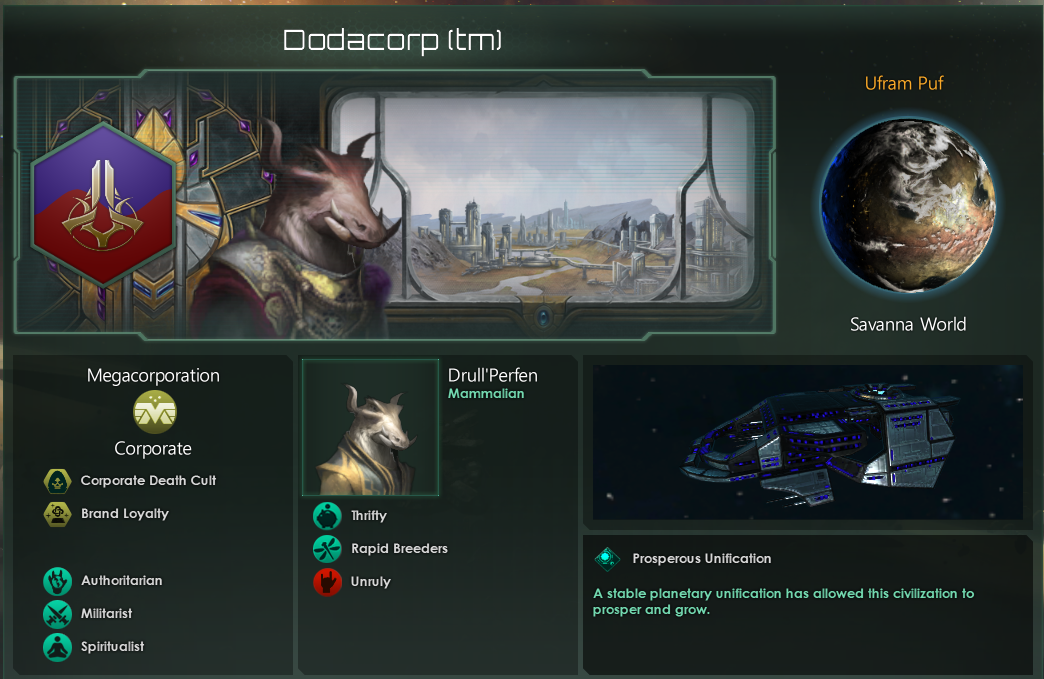 Inspired by the extreme popularity of CK2’s Sunset Invasion, we continue our exploration of mortality with two more civics that we’re planning for an upcoming release, the Death Cult and Corporate Death Cult. 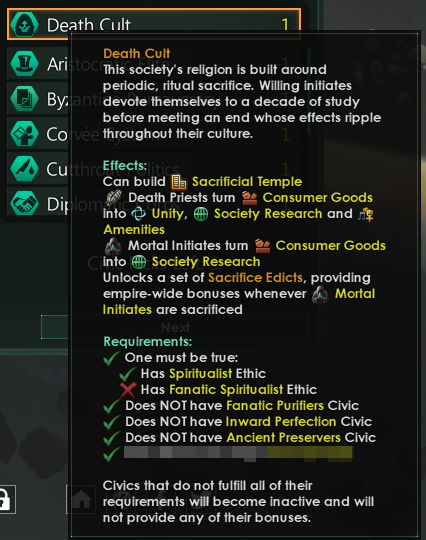 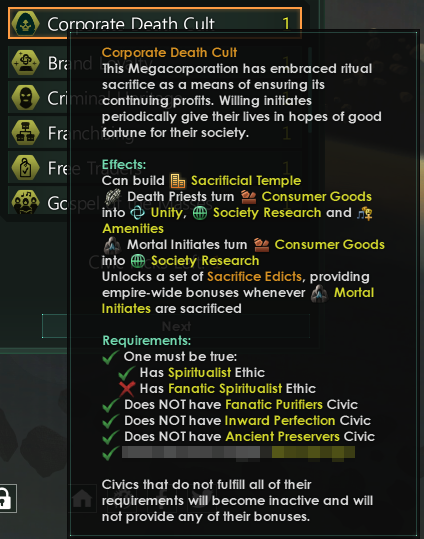 Available to Spiritualist empires, empires with either of these civics replace the Temples that Spiritualists can normally build with Sacrificial Temples that provide both Death Priest and Mortal Initiate jobs. 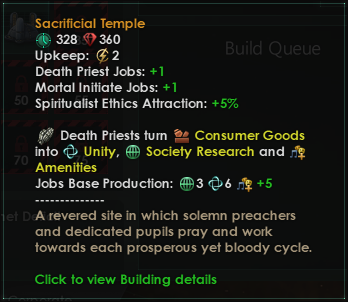 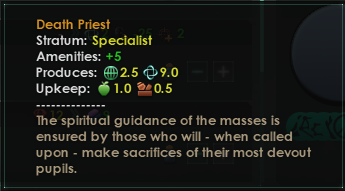 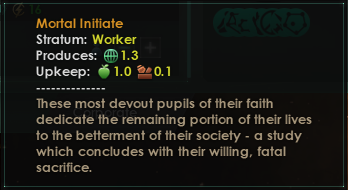 Mortal Initiate job - the benefits are to die for

Death Cults that have Mortal Initiate positions filled gain access to three new Sacrifice Edicts that let them perform the ritual slaughter to the gods (or whatever force your empire’s pops believe in). They’re a bit fickle though, and the magnitude of the benefits varies, but the more blood that is shed, the more likely you are to get the better blessings. 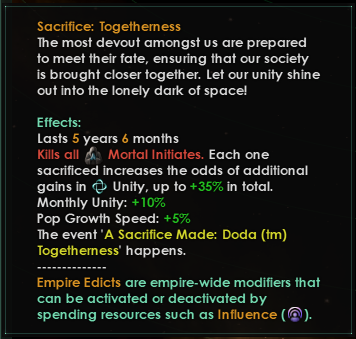 Sacrifice: Togetherness edict - let’s remember the good times we had together 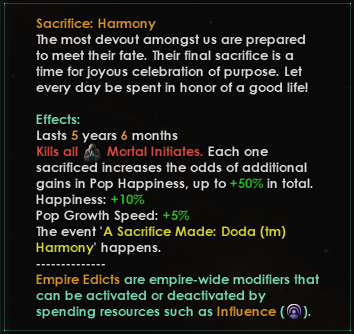 Sacrifice: Harmony edict - you can finally get that corner desk and red stapler you wanted 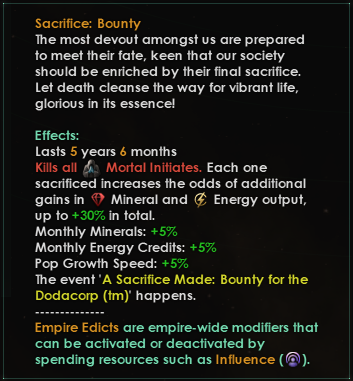 Sacrifice: Bounty edict - it’s like voluntary purging that doesn’t get you yelled at by the Galactic Community

Sacrifice: Togetherness and Sacrifice: Harmony each have a base cost of 50 influence, Sacrifice: Bounty costs a base of 100 influence. These are, as usual, modified by things that affect Edict costs (such as the Spiritualist modifier).

When the Sacrifice is made, the Death Priests will inform you as to how it was received by the divine. 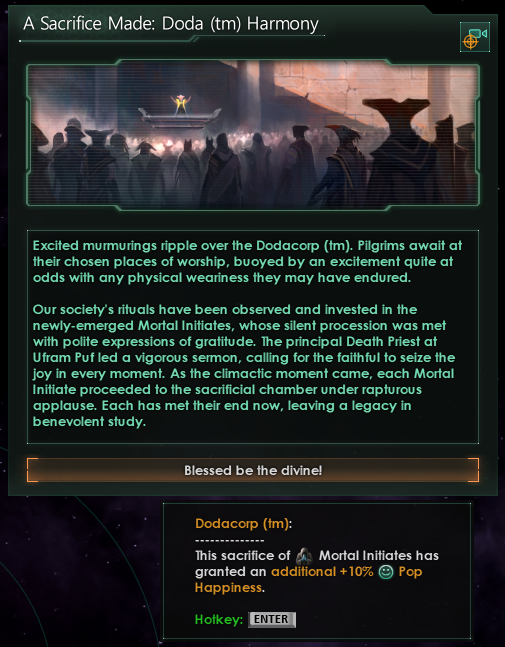 Sacrifice: Harmony - should have built more Sacrificial Temples, these are rookie numbers

Despite being societies revolving around ritual murder (and the Sunset Invasion joke), the theme of these civics is intended to be one of voluntary sacrifice, where the sacrifices are appreciated and honored. As such, it is not open to Fanatic Purifiers, who would probably have a more... uh... aggressive policy.

I know last week I said that we would try to take a glimpse into life in the Mishar Cabal, but they spaced the journalist sent to interview them after they "saw too much". We'll see what we can share about them soon.

.
Toggle signature
You just can’t expect business to start immediately, not until you’d drunk at least three cups of coffee.
Yeah, I’m on Twitter too.​
Reactions:

Will this be in the free update or part a DLC?
Reactions:

You weren't kidding when you said you were pursuing all avenues of improving game performance, were you ...
Reactions:

Nice! Can never say no to a cheeky bit of ritual sacrifice in the pursuit of profit.

But seeing as you are looking at megacorps ... could the Trade value portion of the UI please get some love - its really not very user friendly right now.

On a slightly unrelated note - will the martial initiate pops award resources when killed, or is it moddable to make that possible?

Olterin said:
You weren't kidding when you said you were pursuing all avenues of improving game performance, were you ...
Click to expand...

Hey, I learned a lot from playing so much CK2 after Reaper's Due came out.
Toggle signature
You just can’t expect business to start immediately, not until you’d drunk at least three cups of coffee.
Yeah, I’m on Twitter too.​
Reactions:

Will the AI be able to make proper use of those Civics?
Reactions:

Can we also kidnap pops from other empires to sacrifice them to the blood gods?
Reactions:

so can the mortal initiates be slaves?
Reactions:

Will empires with one of those civics have opinion penalties with other empires?
Toggle signature
Mind over Matter

When you try to click on REDACTED, the hint pop-up says Jeff.

Seems interesting that thiy civic is mutually exclusive with Ancient Preservers which is iirc exclusive to the curators? Also now i want to know what the blurred prerequisite is.
Reactions:

Will be able to sacrifice my slaves this way? Will be i able to set a priority what species goes to die first?
Toggle signature
Per Aspera ad Astra
Reactions:

UltimateTobi said:
Will the AI be able to make proper use of those Civics?
Click to expand...

The AI has secretly been in a death cult for years.
Toggle signature
CO - Hanover Free Militia

Not surprised there isn’t a hive mind/gestalt version of these civics
Reactions:

I mean, Corporate Death Cult? Giving your life so that someone else gets profit?
Am I the only one unable to wrap my head around that? I mean, I can't even begin to imagine how would species like that think or feel. Seems to be kind of immersion-breaking...
Reactions:

A2ch0n said:
Will empires with one of those civics have opinion penalties with other empires?
Click to expand...

That would mean game mechanics intertwining, which never happened in Stellaris so far.
But I wish.
Reactions:

The blurred text on the civic is interesting. What other types of requirements could apply here?

Ethics restrictions are defined in the list first, so it's obviously not a new ethic. It doesn't have the same format as the other civic restrictions (the yellow text is at the end of the sentence). From looking at existing restrictions, it fits the format of "Does NOT have Origin: <x>", so I'm guessing it's a new Origin.
Reactions:

Aeroclub said:
I mean, Corporate Death Cult? Giving your life so that someone else gets profit?
Am I the only one unable to wrap my head around that? I mean, I can't even begin to imagine how would species like that think or feel. Seems to be kind of immersion-breaking...
Click to expand...

Aren't the USA already an early version of this?
Reactions:

Some lovely themed content being pimped in last week's and this week's DD. Very nice stuff @Eladrin . I'm glad the team seem focused on some content expansion rather than feature overhauls or additions, and I say that as someone who pumps out free content, on a semi-regular basis.

edit - Please wrangle one of your 2D artists for some new building etc. icons though, rather than re-use current/deprecated assets. Those are always appreciated and really make new content shine.
Toggle signature
"99 Bugs in the Code, 99 Bugs in the Code, take one down, realise Impact Analysis is a thing you should do, 98 Bugs in the Code." - Me

Corporate Death Cult? Now I can finally make my employer, which has been working us all to death in the name of profits(and Sam Walton).
Toggle signature
Genius only pawn in game of life.