This week we will talk about the Ship Designer. Last week we said that this week would be about “War, Peace, Influence and Claims”, but due to some really good (and secret) reasons we have decided to postpone that Dev Diary for a later date. Now let's continue with how you customize your ships in Stellaris... 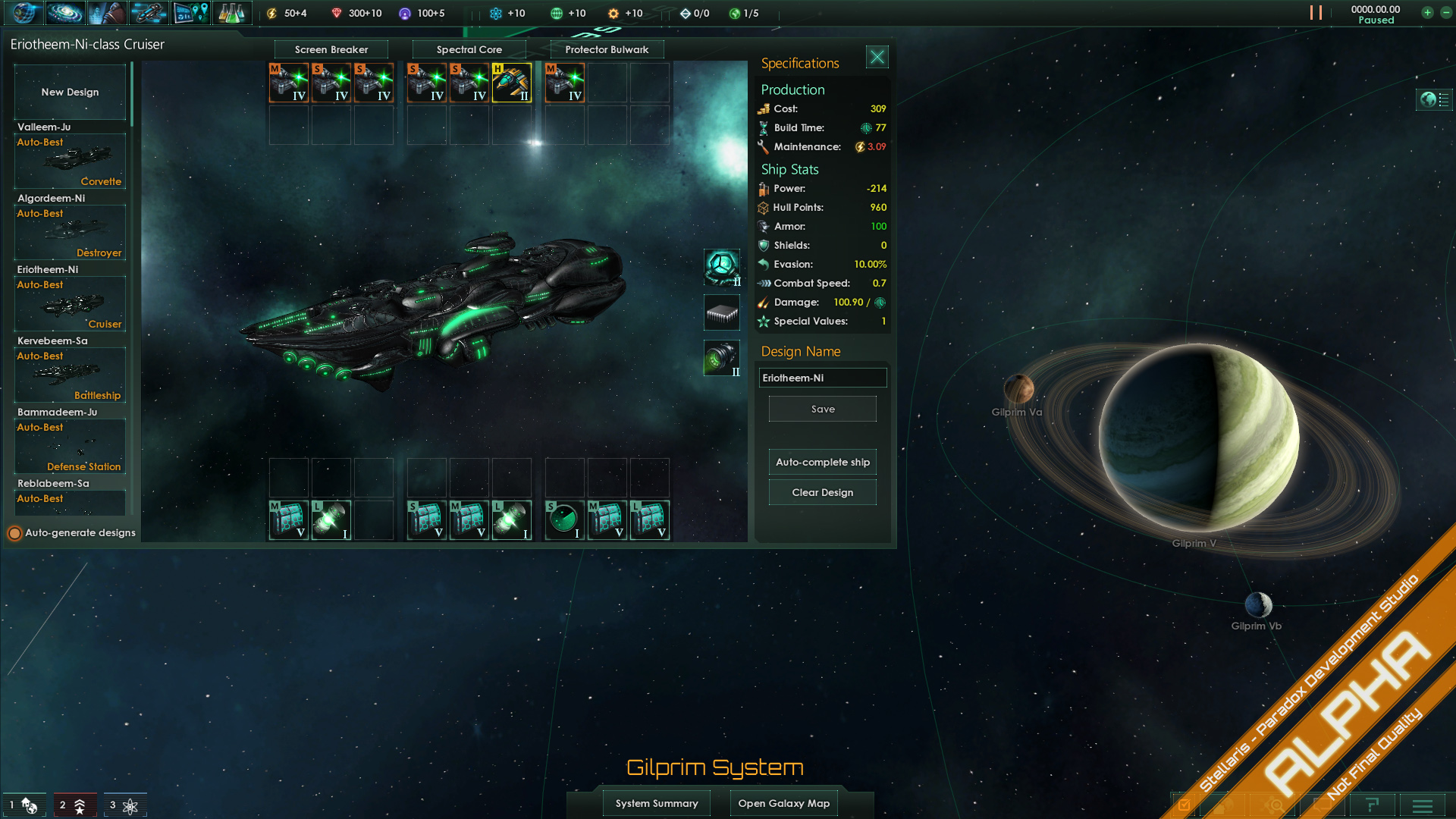 Customizing your ships is vital for making sure that your ships are equipped for any challenges that awaits them in the galaxy. Your ships have a build cost, build time and maintenance cost that is calculated from the different sections and components that your ship consists of. The ships also receive a wide range of different values; all these are affected by what sections and components you use on your ship. These values can be modified by, among other things, researching technologies and the traits of your leader.

Every ship consists of at least one section that you can place different components on. A Corvette, for example, has one only section but a Battleship has three. The number of slots on each section (slots to place components) may vary between different sections. You can choose all different sections by yourself. The sections are divided into categories based on where they are placed on the ship, so a stern section cannot be placed in the middle section position. 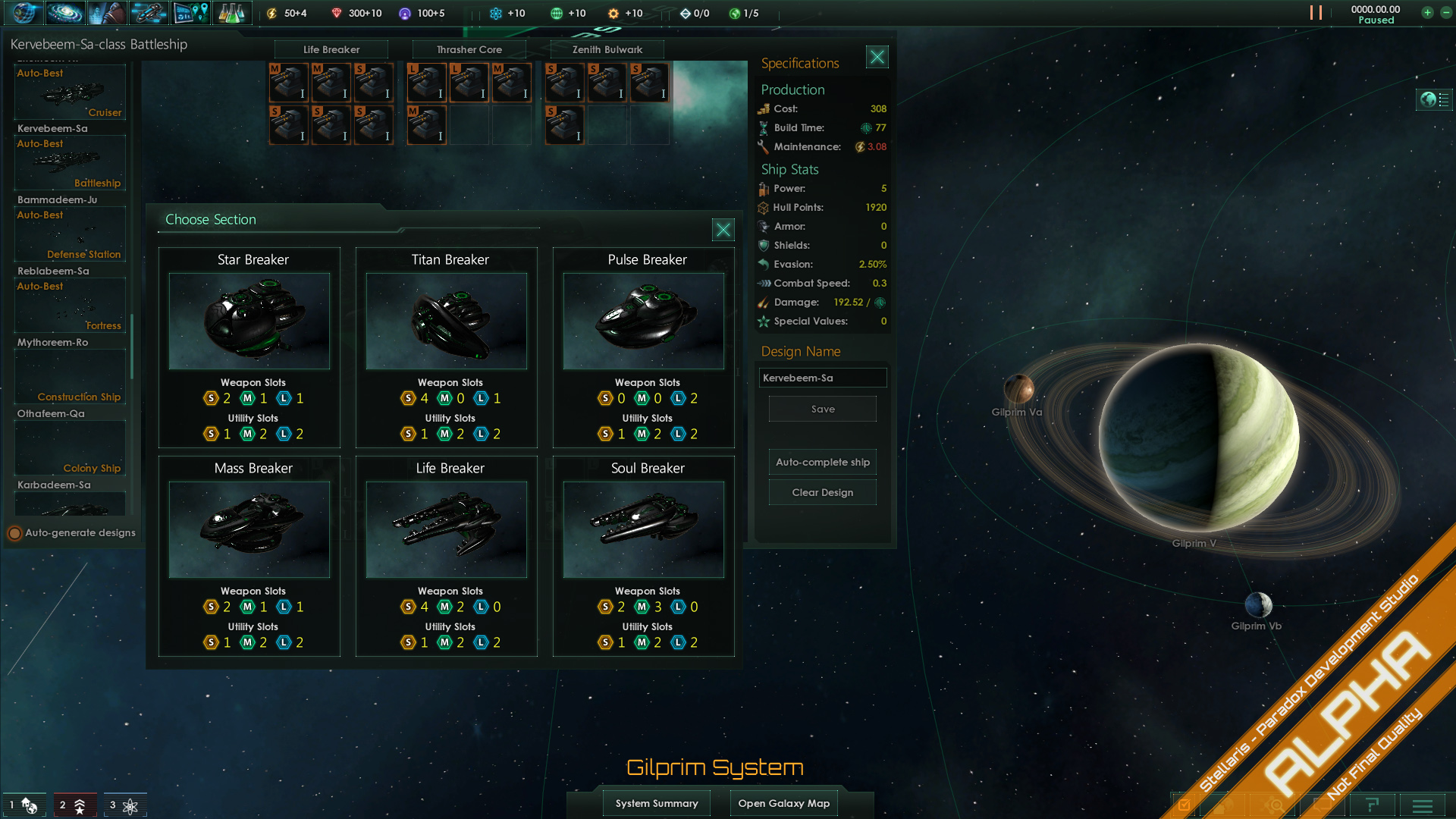 Every section may have available weapons and utility slots. These slots can be of Small, Medium or Large sizes. The different sizes affect the size of the component you may place in the section; a large weapon component may, for example, do more damage but has a lower hit chance. Some sections also have a hangar slot, but more on those in a later dev diary...

Weapon components are, like the name suggests, different components that work as weapons of some kind. It could be something like a huge X-Ray Laser or some point-defenses that are great for when you encounter hostiles using missiles.

Utility modules are passive components that affect the properties of the ship. It could be different types of shield or improved power reactors. A reactor is vital for your ship to function; several different weapon and utility components drain power, and unless you have enough reactors providing the necessary power, your ship will not be able to function (it’s an invalid design).

We also have some required components depending on the class of ship you are trying to build. One of the basics is what FTL capability your ship has, so you may build some ships with warp and others with wormhole FTL. It is, however, only possible to have ships with the same type of FTL in the same fleet. You may also set what thruster to use, which affects the speed of your ships and their evasion chance. For military ships, you can also set what combat computer to use on the ship, which affects how they behave in combat. Different combat computers can be unlocked by technologies. There are a lot more types of components than the above, but this should give you a hint of the basic mechanics..

For those of you who really don’t like to fiddle around with designing your own ships (and we know that you are legion), we have the option to auto-generate new ship designs whenever you research a new technology with something that the game thinks you should use on your ships. This algorithm is very close to what the AI will use.

In the mid and late game you may also use the designer to customize your military defense stations and make sure that noone will ever be able to penetrate your solar system defenses. 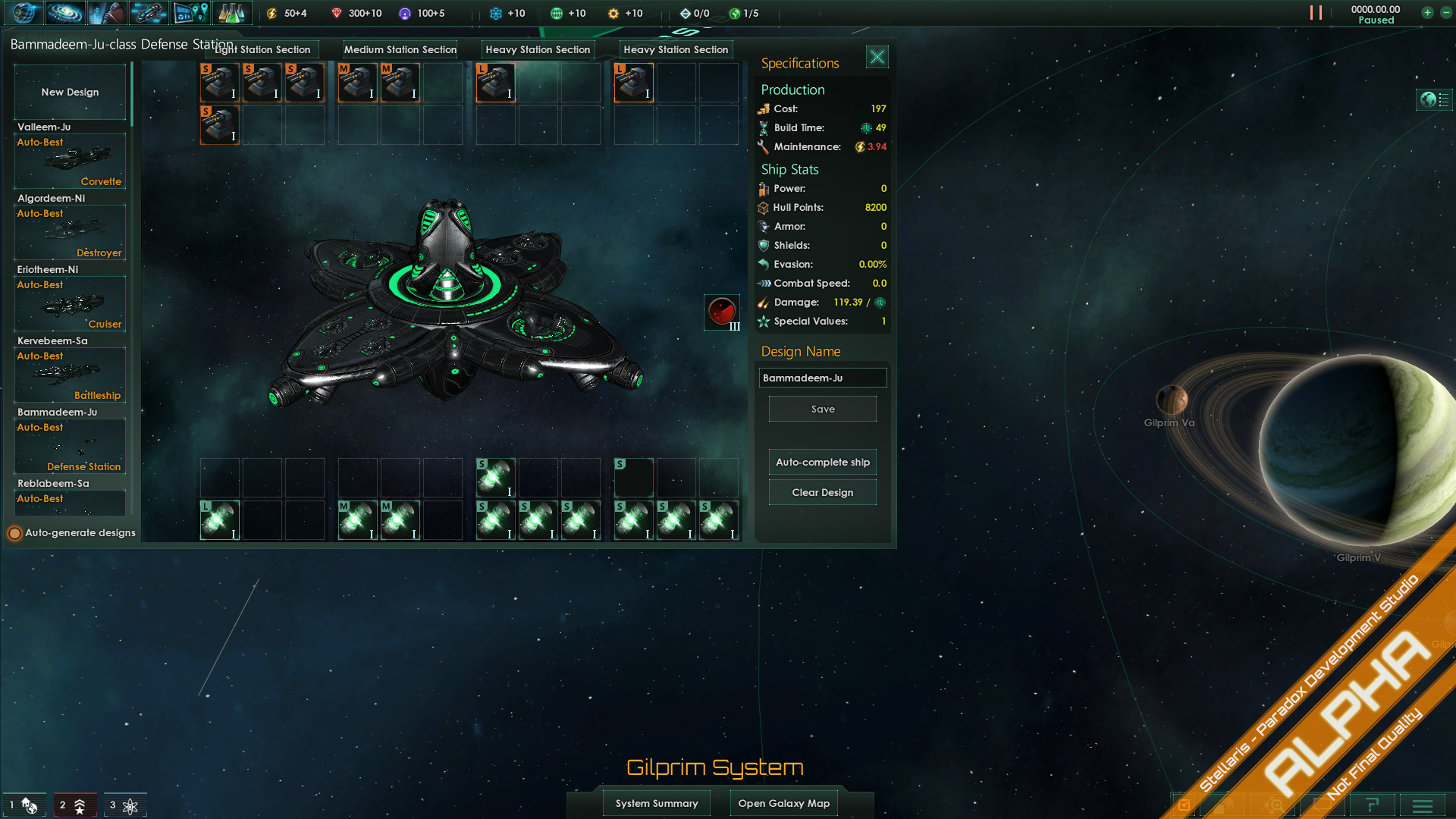 That is all for this week, I hope you enjoyed it despite the fact that I don’t write as well as Goosecreature! ;-)

Next week we will talk about fleet combat in Stellaris!
Last edited by a moderator: Jan 28, 2016
Expand signature
Rikard Åslund

There's a fine line between fishing and just standing on the shore like an idiot.
https://twitter.com/RikardAslund
Reactions:
J

Looks noice!
Expand signature
To lords and ladies of Byzantium
Of what is past, or passing, or to come.
Reactions:

Don't sweat it... Ship design is very much about how I intend to wage war, impose peace, project influence and enforce claims!

Thanks for another really good and detailed DD!
Reactions:

It does look like EVE. The armor icon looks really similar to the EVE one too.

Since I like how it is done in EVE, good work
Expand signature
I was imagining Petrarch sobbing whilst a mad Irishman hacked repeatedly at the corpse of Nigel Farage, mutilating it still further. Meanwhile, an Ulsterman dressed entirely in orange yelled that the Irishman was actually English, and less Irish than him. - DoomBunny
To be honest I kinda like being a woman. - Lord Finnish
I have the social capabilities of a carrot - LYNCHY
War is dark and full of horror. But there's an unshakable tinge of honor and glory from time to time. - DarthShizNit
Reactions:

"due to some really good (and secret) reasons we have decided to postpone that Dev Diary for a later date"
Reactions:
J

Perhaps not entirely related to the designer but this is something I really want to know. Do ships need to have a planet with factories to manufacture or does it only require that you have enough of the mineral resource and if you leave the pile of metal in a sealed room for long enough it will turn into a fully formed spaceship.

Zoft said:
This week we will talk about the Ship Designer. Last week we said that this week would be about “War, Peace, Influence and Claims”, but due to some really good (and secret) reasons we have decided to postpone that Dev Diary for a later date. Now let's continue with how you customize your ships in Stellaris...
Click to expand...

OT: Is a battleship the largest ship available?
Reactions:

Ha! Fighters are in!
Reactions:

nice
Expand signature
We need a "funny" rating in this Forum
Reactions:

A suprise but a pleasant one, how many designs may a nation have at the same time?
Expand signature
If anyone proclaims a certainty of 100 % or more then you know that they are deluded about one thing at least.

The establishment of the Kievan Rus:
https://forum.paradoxplaza.com/forum/index.php?threads/rise-of-the-rurikid-a-kievan-rus-aar.1129045/
Reactions:
G

"One of the basics is what FTL capability your ship has, so you may build some ships with warp and others with wormhole FTL. It is, however, only possible to have ships with the same type of FTL in the same fleet."

Earlier it sounded like you start with one FTL type, and then stick to it (with maybe the possibility to salvage ships with other), but does this mean that we will be able to build ships with all 3 types?
Expand signature
Check out my mods:
Expanded Stellaris Traditions which adds 48 new Tradition Trees to the game.
Expanded Stellaris Ascension Perks which adds 60 new Ascension Perks to the game.
Reactions:

PLEASE, don't adopt Rock-Paper-Scissors system. It already killed combat mechanics of Endless Space and Galactic Civilizations. Shields countering lasers, ECM to missiles and armor to kinetics is a sure recipe for disaster. It looks fun but ALWAYS devolves to "check enemy, refit your fleet and crush him with hard counters"
Look at Mastr of Orion 2 mechanics - One Shield, One armor and various weapons with different effects and damage types. but you won't be franticly restart mid-game because AI researched hard counter to all your weapons
Last edited: Jan 18, 2016
Reactions:
B

So these sections, do they ONLY vary in the slots they bring to the table, or do they also have intrinsic properties and effects, like in SotS?
Reactions:

When will we be seeing some gameplay? Just a short 30 minute campaign or something.
Expand signature
"Bolton has blundered," the king declared. "All he had to do was sit inside his castle whilst we starved. Instead he has sent some portion of his strength forth to give us battle. His knights will be horsed, ours must fight afoot. His men will be well nourished, ours go into battle with empty bellies. It makes no matter. Ser Stupid, Lord Too-Fat, the Bastard, let them come. We hold the ground, and that I mean to turn to our advantage."
Reactions:

<11:59:37> "Meclancer": While Levi on the other side he has actually honered every deal i have made with him.​
Reactions:

The interesting part for me is when it is said that your empire can have more than ine FTL type, which is really interesting, so I guess you start iwth one and can get the others trough research?