Menu
Install the app
You are using an out of date browser. It may not display this or other websites correctly.
You should upgrade or use an alternative browser.
Stellaris 42308 Bug Reports 22574 Suggestions 12772 Tech Support 2130 Multiplayer 323 User Mods 4097 Stellaris AAR (After Action Reports) Console edition 917
Show only dev responses

It was great to finally reveal what we’re working on at PDXCON, and today we’re back with yet another dev diary where we will dive into some more details on the reworked federations.

The screenshots still feature a bunch of work-in-progress stuff, like every federation perk using a placeholder right now. Numbers and effects aren’t necessarily final either. 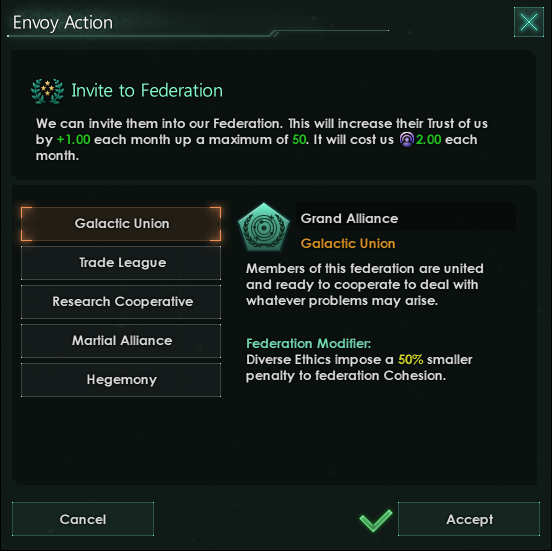 Certain federation types have requirements on what type of empire can suggest to form them, but there are no limitations on who can join a federation (except for killer empires & inward perfection). Yes, this also means that Barbaric Despoilers and Criminal Syndicate are no longer excluded.
​
Galactic Union
This will be a more generic type of federation that will fit most groups of empires. This federation makes it easier to cooperate with empires, as diversity of ethics will have a less negative impact on maintaining cohesion. This federation type will be available to everyone in the free patch.​ 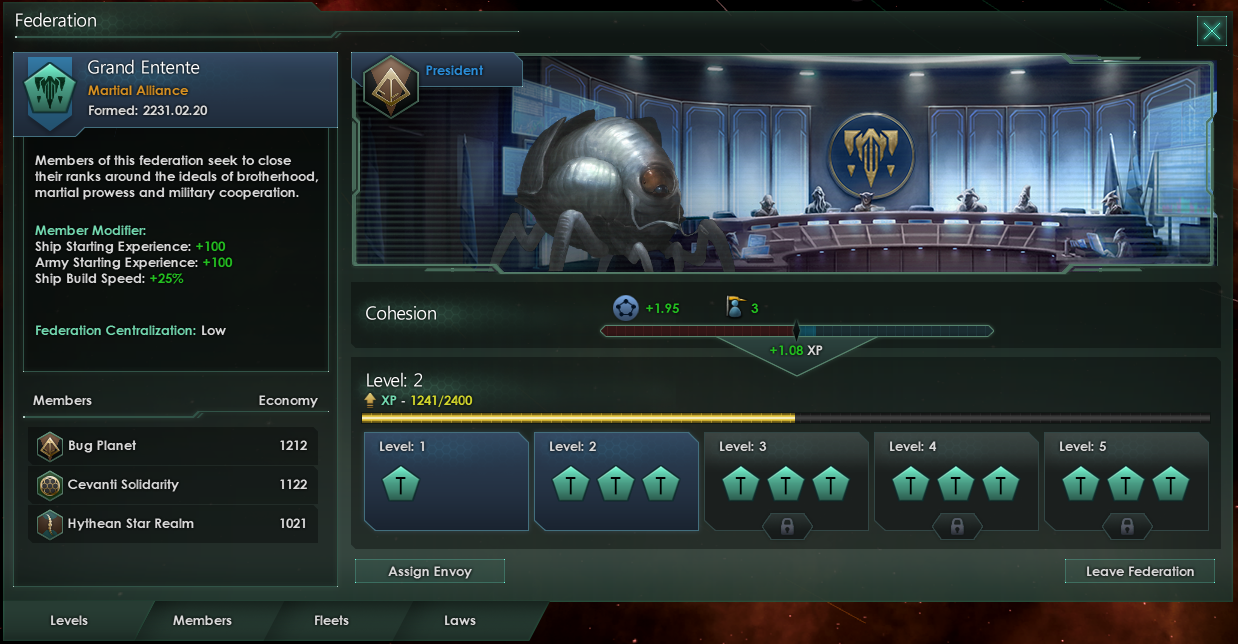 Fleet bonuses a plenty!
​
Martial Alliance
This federation type is focused around having a very large and powerful federation fleet. Only militarists can suggest to form this federation.​ 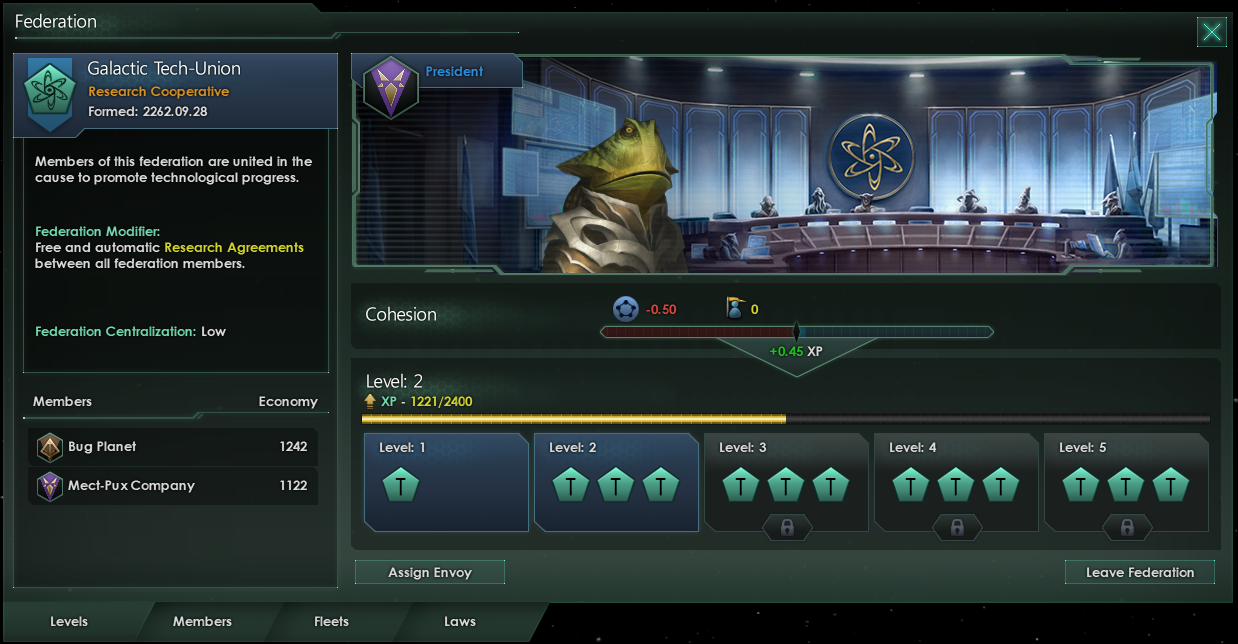 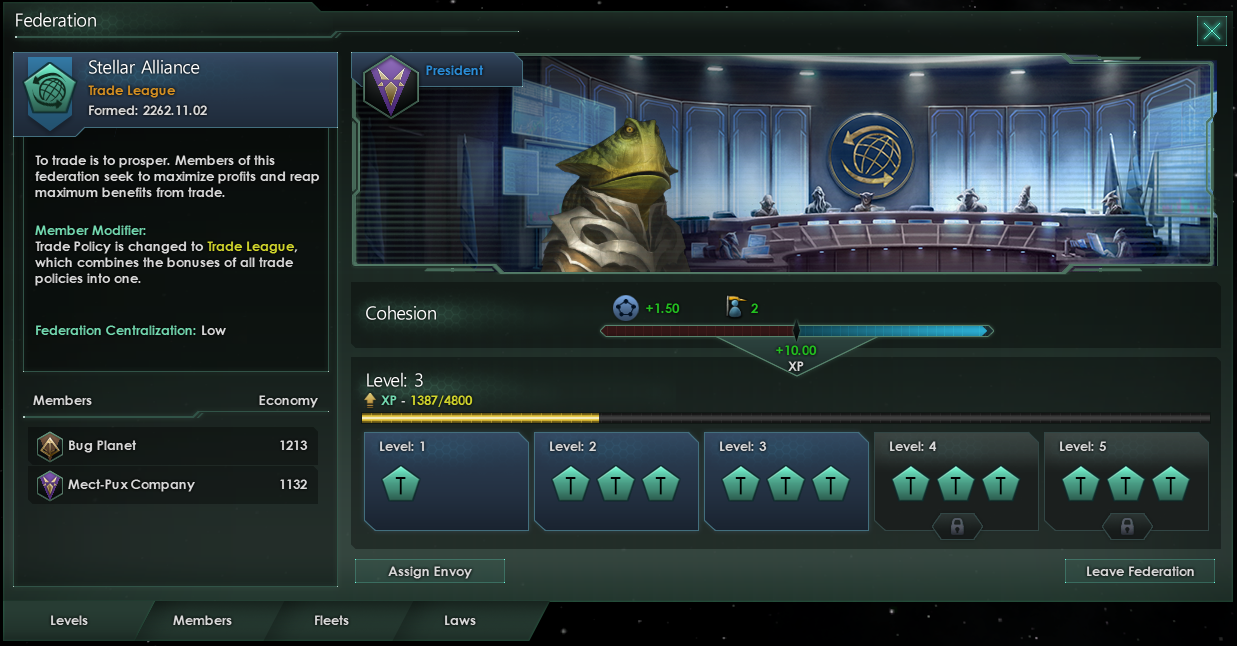 Trade League
If trade value is the focus of your empire, the Trade League is probably a very good federation for you to be a part of. The Trade League gets access to a new Trade Policy which combines the bonuses of all other trade policies. An empire needs to be a Megacorporation or have the Merchant Guilds civic in order to be able to suggest to form a trade league. 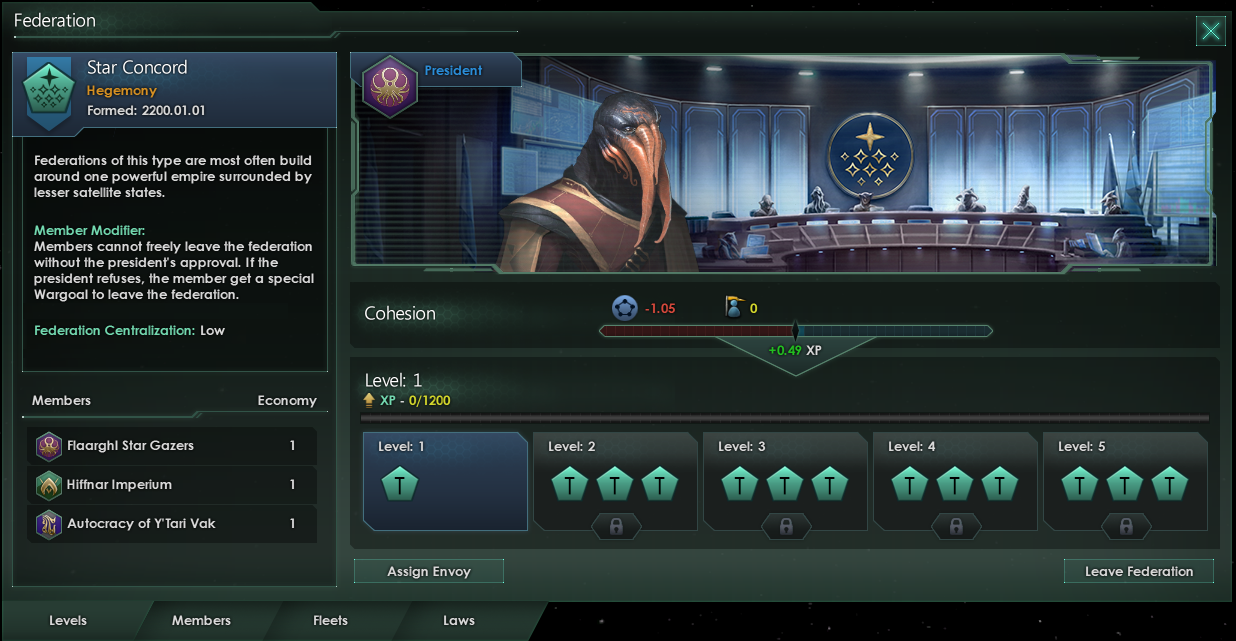 Did you know there is an Origin that lets you start as the president of a Hegemony?​
Hegemony
This federation type is built around one strong core member. The president gets most of the bonuses, but the bonuses for the members are also quite powerful. Only authoritarian empires may suggest to form a hegemony. 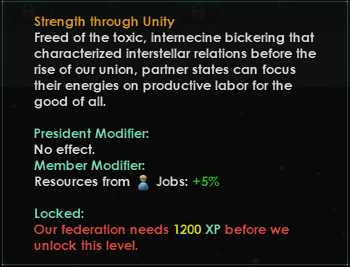 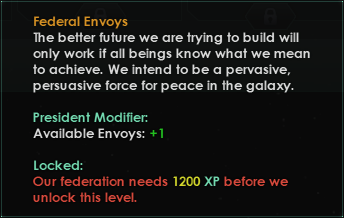 President gets an additional Envoy.​
Each time a federation levels up, they will get access to 3 new perks.

Level Up & Cohesion
In order to level gain XP, a federation needs to have positive Cohesion. The amount of XP a federation gains (or loses!) per month is directly tied to its Cohesion, which is a value that ranged from -100 to +100. 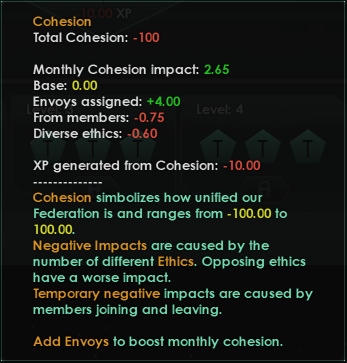 There are a number of things that will reduce Cohesion every month, such as every member, diverse ethics and opposing ethics. Federation members can counteract this by assigning Envoys to the federation, which will increase monthly Cohesion.

When Cohesion is at +100, the federation will gain +10 XP every month. If a federation loses XP and drops a level, they will lose access to their perks after a few months.

Federation Laws
It is possible for federations to customize some aspects of its rules. In some cases, federation types also have access to different laws at different points. A Research Cooperative can never have the highest level of fleet contribution, and they also require higher centralization to increase their Fleet Contribution.

Each federation type will start with a certain set of default laws. 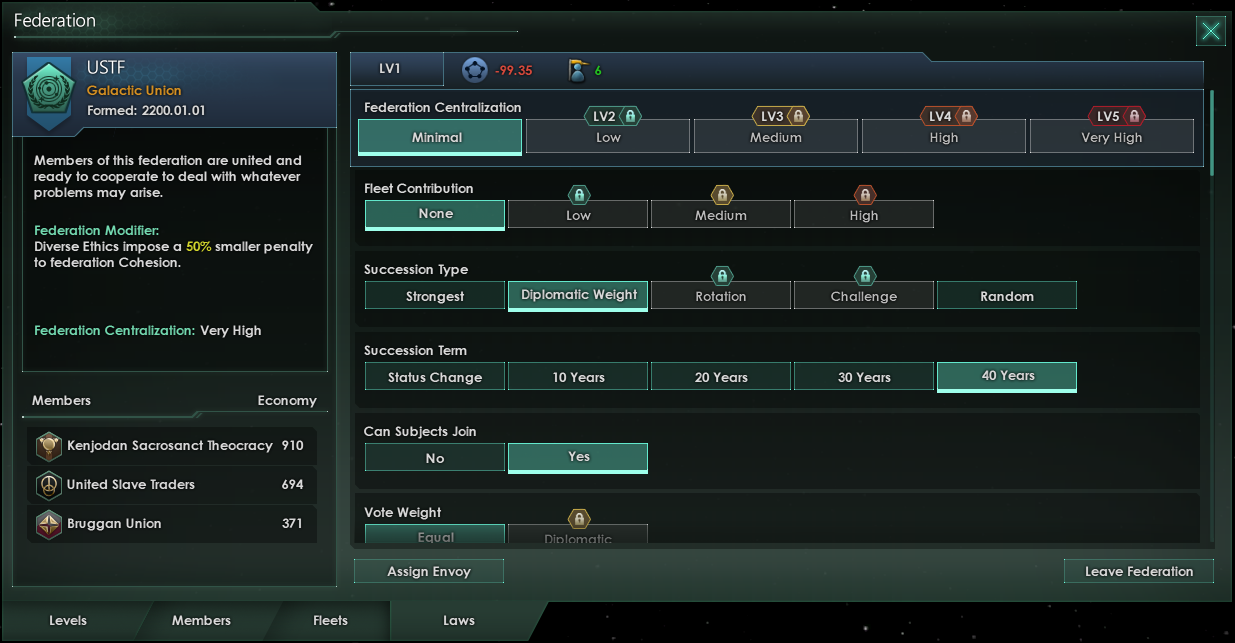 Increasing centralization isn’t always easy though, as doing so will have a large negative impact on Cohesion. That means more Envoys will need to be assigned to the federation to maintain its Cohesion.

The primary reason to increase centralization is to unlock new laws. 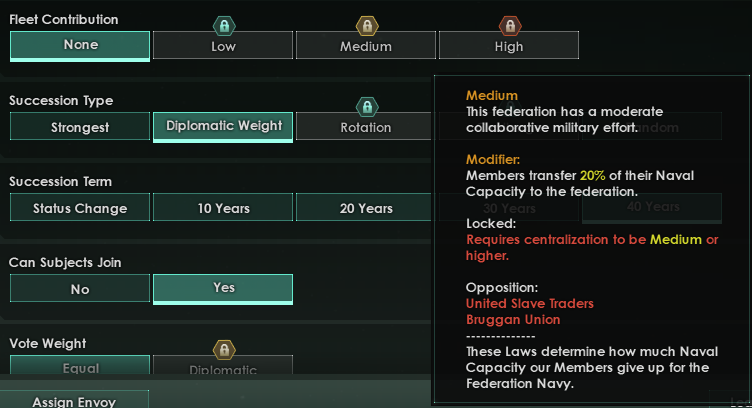 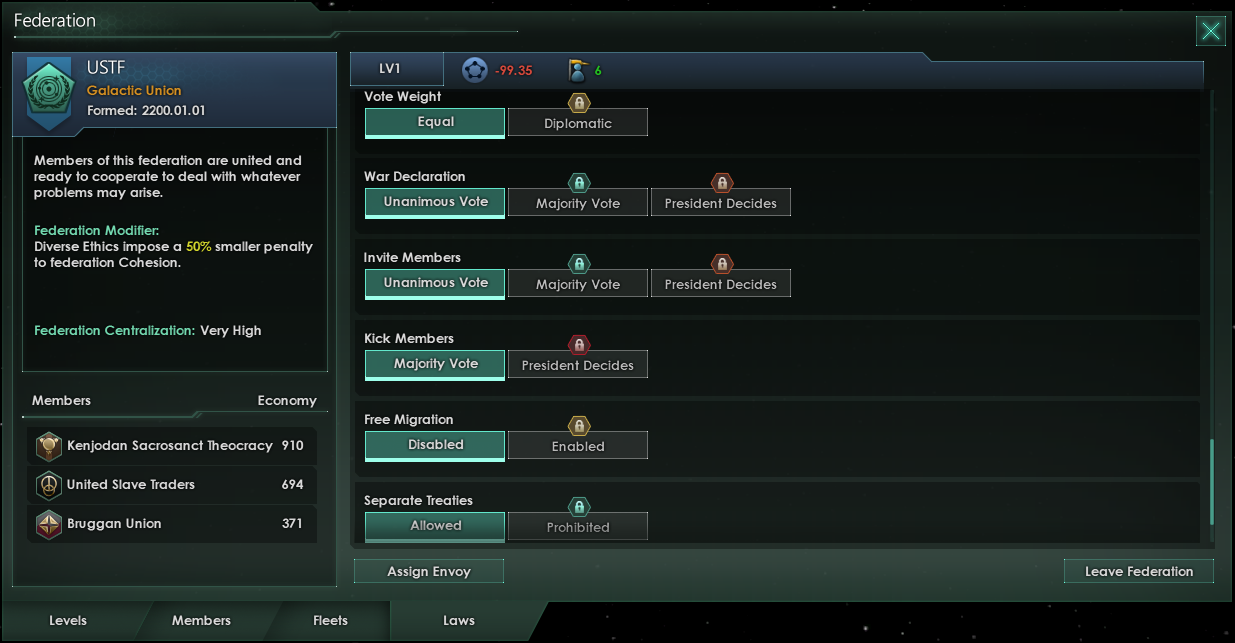 Most of the other laws not visible earlier.​
Succession types
As you could see in previous screenshots there are a bunch of different laws for how federations can decide who becomes the president. Strongest is the empire with the greatest economy. Diplomatic Weight is the empire with the largest Diplomatic Weight (we talked about that at PDXCON, but more on that later). Rotation will rotate the president. Random will choose a president from a random member. Challenge succession type allows you to pick a challenge type for your federation. 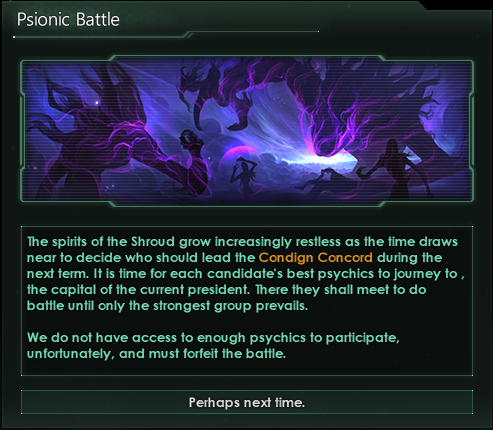 Perhaps we’ll have enough psi-capable pops next time...​
There are currently two different challenge types:
Psionic Battle lets psionic pops battle it out over which empire should be president.
Arena Combat lets the rulers of competing empires battle it out. Certain traits for the ruler (both species and ruler-specific) will influence how large chance the ruler has at winning. The Chosen will of course be very hard to beat.

That’s it for this week, and we hope you survive the information overload! We realized there are so many details we possibly could share, but this should cover the most important parts.

Next week we will be talking about the Galactic Community, Resolutions and more!
Last edited: Oct 31, 2019
Toggle signature
Follow me on Twitter.
Reactions:

This is interesting! One question so far: Are Hegemonies going to be the replacement for Feudal society if you have Federations (Like how Megacorps replaced Corporate Dominion), or is it a new thing? Either way, will Feudal society be fixed, and improved?
Toggle signature
The universe is probably littered with the one-planet graves of cultures which made the sensible economic decision that there's no good reason to go into space - each discovered, studied, and remembered by the ones who made the irrational decision. - Randall Munroe
Two possibilities exist: Either we are alone in the Universe or we are not. Both are equally terrifying. - Arthur C. Clarke.

I really like very much all these new Federation's mechanics. Probably, Stellaris is going to reach a new and higher level with this update.

I just wish I can play that future game with mods...
Toggle signature
If you also have issues with mods, check this thread: https://forum.paradoxplaza.com/forum/index.php?threads/mods-arent-loading-in-game.1270413/ FIXED with AndrewT's help (and some luck).​

Curious about what Centralization actually is. Kinda glossed over that one.

Also why do Materialists get a special Federation while Spiritualists don't?

Do you have to be a megacorp to join a trade league or only to form it?

Edit: The same goes for the other types.

Btw... no Spiritualist Federation oriented? Like Spiritual Covenant or Ecclesiarchy...

Images appear to be broken?

I'm tempted to go psionic just so I have an excuse to do Psionic battle royale.

Speaking of which, will AI priorities change so that they pick ascension options like Flesh is Weak and Psionics earlier?

Will there be any way to eventually merge all members into one state?

Massive color blind warrior. If you need to know if your color scheme works for color blindness, send it to me.
The Bug That Was and No Longer Is: https://tinyurl.com/qvnnc3o
Twitch: MadCow99

Even if it's really promising I hope we'll have some IA and performance news...

some of the images are not loading for me.
Toggle signature
Waiting for that next binge addiction to a PDS game to hit.

What level of centralization in the Federation do you need in order to pass primogeniture?
Toggle signature
GENERATION 38: The first time you see this, copy it into your sig on any forum and add 1 to the generation. Social experiment.
S