I have just returned from a belated vacation in Japan, and although I had a great time there it is also fun to be back to work. Today I want to talk about some of the cool things happening with Stellaris this year. As many of you have probably guessed, Stellaris will announce a new expansion at PDXCon this year. This expansion will feature a lot of cool new things, most of which will be revealed at PDXCon. But I do also have something really neat that I want to share with you now! 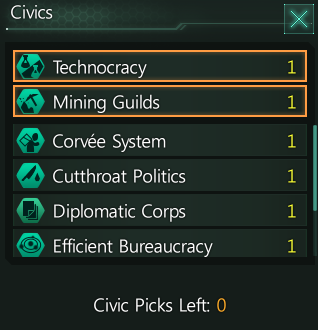 Good ol’ civics. Gotta love ‘em.​
Back in Utopia we introduced a lot of cool new features to improve how you could customize and specialize your empire. Civics were a great addition to the game (in fact I consider them to be one of the best), but they are also awkwardly split between “backgrounds” like Syncretic Evolution and “institutions” like Distinguished Admiralty or Imperial Cult. Civics have added a lot of really cool options to how you can play the game, and that is something I want to expand upon – this is where the Origins come in. 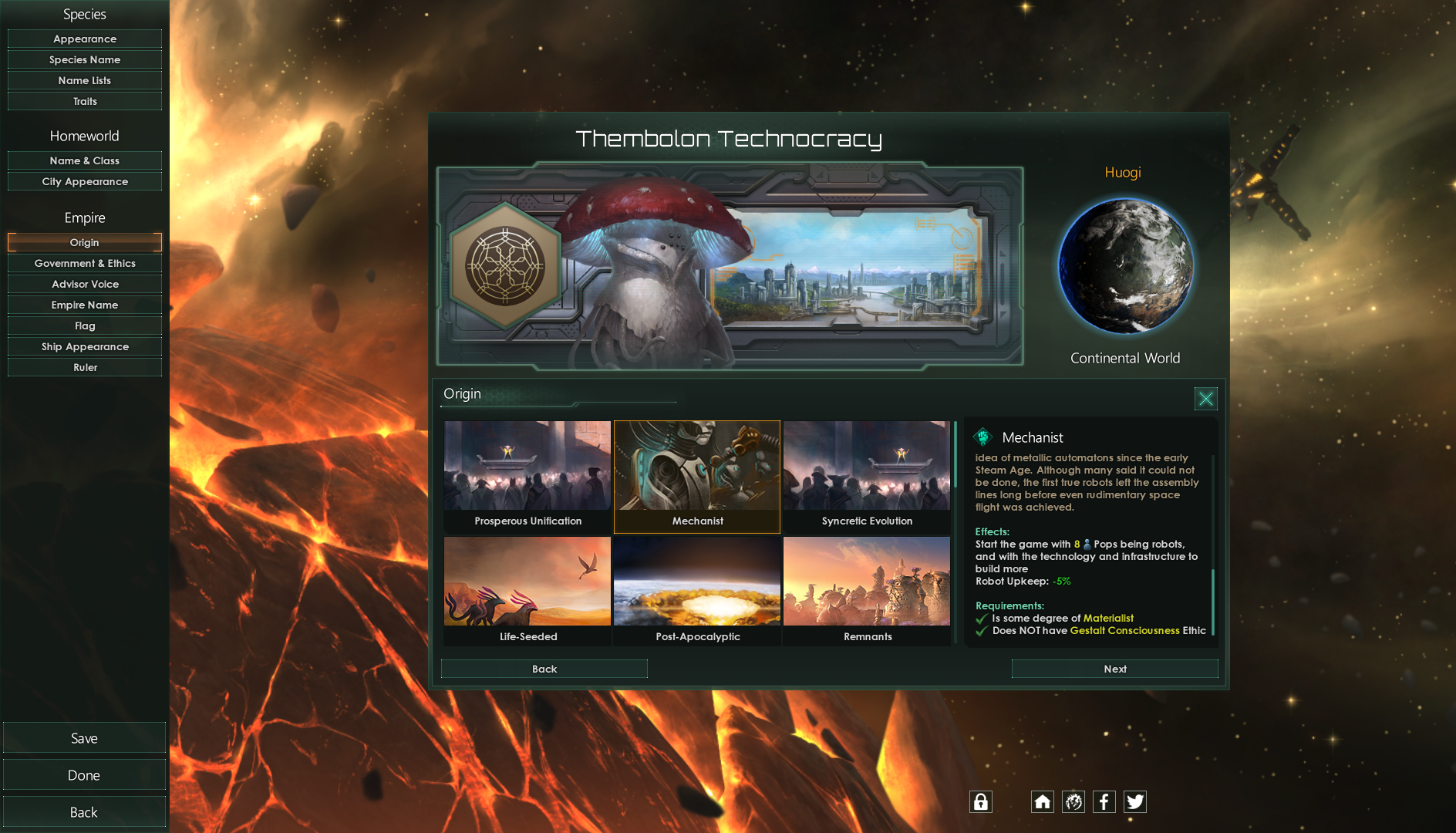 Materialistic, mechanist, mushroom madness?
​
Origins is a new feature that is very similar to Civics, and will now represent your empire’s background. An empire can only select one Origin, and an Origin cannot be changed. We will be adding a bunch of new Origins (some of them are really cool!) and we will also be changing some Civics into being Origins instead. Examples of Civics that will be converted into Origins are Mechanists, Post-Apocalyptic, Life-Seeded and Syncretic Evolution. 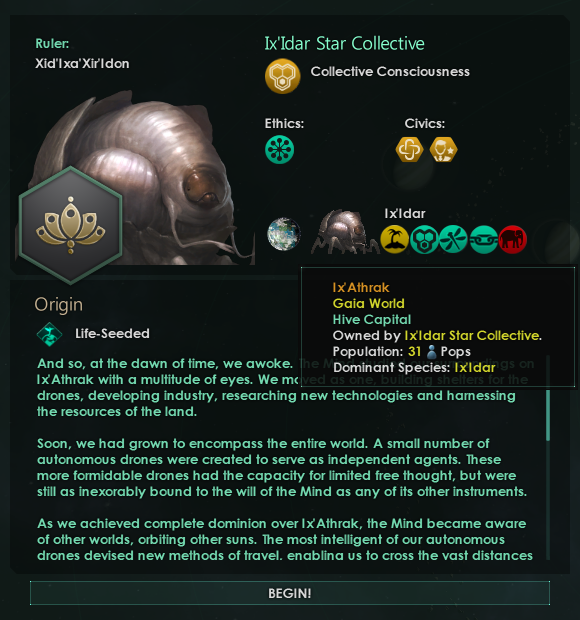 Life-Seeded Origin, now open to hive minds.​
Certain types of empires were previously unable to access some of these backgrounds since they have their own set of Civics (Gestalts and Megacorps for example). Because some of those Civics have been turned into Origins, those backgrounds will now be available to more types of empires. This means that it should now be possible to have a hive mind with the Life-Seeded origin or a Megacorp with the Mechanists origin. We know this is something people have been asking for for a long time now, and it’s really great to be able to add Origins to the game.

Like I mentioned earlier, we will also be adding a whole lot of new Origins that will add interesting starting positions for your empire. Right now we have 16 in the current version of the game, and we will probably see a few more until it's finished. I think Origins will be a great addition to the game that will surely help to facilitate a lot more player stories and player fantasies.

We won’t be showing all of these yet, but it will probably be immensely hard for us to not tease a few every now and then

Who isn’t curious about Remnants and Scions?​
PDXCon is rapidly approaching and Stellaris fans will have a lot of cool things to look forward to! In two weeks we will be back again with another dev diary, where we’ll talk a bit more about PDXCon.
Expand signature
Follow me on Twitter.

Why we still have no access to machine empires with individuality origin? Only Ascension but no starting option?

will we still be able to pick 2 civics besides the origin?

Love this so much. Life-Seeded Megacorp would be so awesome. One planet challenge with Branch Offices for all your energy needs.
Expand signature
Pssst hey kid, you want some DLCs? First one's free

More flavor to the history, I like that. I for one welcome immersion mechanics from our Paradox overlords.
Expand signature
Hearts of Iron 4: Minimalist Mod

How will pre-FTL species that become empires (either through natural advancement or an empire providing technological enlightenment) handle assignment of Origins?

Likewise, how will Origins be assigned to break-away empires from existing empires (e.g. if you release a vassal)?
L

Will it be easily moddable so more origins can be added?
Also will forced vassals from conquering or rebellion have a unique one like "subject" or "free'd slaves" or whatever?

It looks pretty neat though.

Origin civics! I've been hoping for this! If I'm correct in thinking, remnants is a relic world start. I wonder how food will work, or if you'll end up just adding a small amount of agriculture districts to relic worlds.

Will mechanist be available to hive minds, and if so, could we see hive minds assimilating synths into the hive and vice versa?
Expand signature
The universe is probably littered with the one-planet graves of cultures which made the sensible economic decision that there's no good reason to go into space - each discovered, studied, and remembered by the ones who made the irrational decision. - Randall Munroe
Two possibilities exist: Either we are alone in the Universe or we are not. Both are equally terrifying. - Arthur C. Clarke.

finally
origins looks great
hope there will be more than 20 of them
and maybe major update for the civic and trait?
10~20% bonus of basic resource and tech really isn't important enough after megacorp
and what is the point of three type of tech point now?
maybe add a policy allow player to increase basic tech output of one type at the cost of other two?

i cant wait for the extra stuff to come - it looks great, BUT WITHOUT better AI and PERFORMANCE, i don´t see a way to play this game in the future or buy the new stuff(DLC) - sorry!

This is really cool!
I do hope that there are still enough civics left to choose, when creating your empire.
It would be kind of sad if we were to see only a handful of civics, chosen by every other empire.
Expand signature
For every complex problem there is a simple solution that is wrong.
~Someone Famous

there wont be civics identical to origins obviously

Would it be possible to make it so that you have at least some control over what your Syncretic species will be? If not traits, I'd like to at least be able to pick the portraits.

Major Malfunction said:
Why we still have no access to machine empires with individuality origin? Only Ascension but no starting option?
Click to expand...

Beside the default origin, there are 3 civics that pretty much define your origin and play style. I am fairly certain, exterminators, assimilators and servitors will become an origin for machine empires.
A

I hope Paradox is going to add new features to the endgame gameplay
Last edited: Sep 26, 2019

IndigoRage said:
Would it be possible to make it so that you have at least some control over what your Syncretic species will be? If not traits, I'd like to at least be able to pick the portraits.
Click to expand...

we can already do this with the civic, so we probably will be able to when it is an origin
C

This is something I've considered myself so it's nice to see. The rest of my comments are a bit off topic but are somewhat related...

I think the early game is mostly very good and is the stage least in need of development but I think the general area that needs to be improved the most is differentiation between empires. I don't really get a strong sense that a "fanatic" types are really all that fanatic. For example, fanatic spiritualists should have built a big temple way before they got to space - if not, how can you possibly consider them to be "fanatic"? In general, the buildings you have at the start should be affected by the settings. Though here I'm talking more about ethics than civics, though I certainly welcome civics that affect your starting buildings too. From a game balance perspective, I think it would be better for all empires to start off with the same number of pops, unless there is a clear trade-off, and while a "default" empire might have multiple copies of certain buildings more specialist empires would get different buildings to the default.

IndigoRage said:
Would it be possible to make it so that you have at least some control over what your Syncretic species will be? If not traits, I'd like to at least be able to pick the portraits.
Click to expand...

You already have the option to define their portrait and traits. I don't think the devs would take away that option, if it is changed into an origin. I hope syncretic evolution makes it possible to swap out the proles trait. I don't always want to play a syncretic empire that has default slaves. Maybe both species get along pretty well and formed an egalitarian society?
Show hidden low quality content
You must log in or register to reply here.
Share:
Facebook Twitter Reddit Pinterest Tumblr WhatsApp Email Link
Top Bottom