Hello all, this is Hildor Anduv, the UX Designer on Stellaris. I’ve been with the team since December, and have really enjoyed working on such a great game. With my first Dev Diary I’m going to be sharing how I have been approaching UX Design on Stellaris.

Disclaimer: We're not quite ready to announce our plans just yet (we're saving that for the big stage, PDXCon), so this is going to be more process oriented without delving into specifics about any new feature. If that's not your thing, you can safely give it a miss, but if you're interested in the nuts and bolts of how games are designed and made, let us lift the curtain a bit.

Whiteboarding: The UX Corner
Whiteboards are a great place for getting your ideas out quickly. When whiteboarding I try to get team members from multiple disciplines and rough out ideas, together. It’s a great way to discover gameplay and player needs, as well as find any potential development pitfalls early on.

We wanted to create a permanent space for this, and thus the UX Corner was born. Here we come together and iterate on ideas in real-time as a group. Having the permanent space has helped facilitate conversion and increased cross-discipline communication within the team,.

Wireframing & Prototyping.
From the whiteboard sketches, I then move onto creating more detailed wireframes, the skeletal mockup of a UI design. Keeping your wireframes simple lets you iterate quickly, but more importantly allows you to nail down what content should be displayed, and how best to lay it out visually for the player.

I typically try to nail down one key screen, and from there I build out a User flow of the entire experience.

When Designing the Archeology UI for Ancient Relics, I had some key pillars I wanted to nail.

Once I nailed an overall layout for the Archaeology UI, I then broke it out into a User Flow to capture the full breadth of a player’s journey while excavating a site. 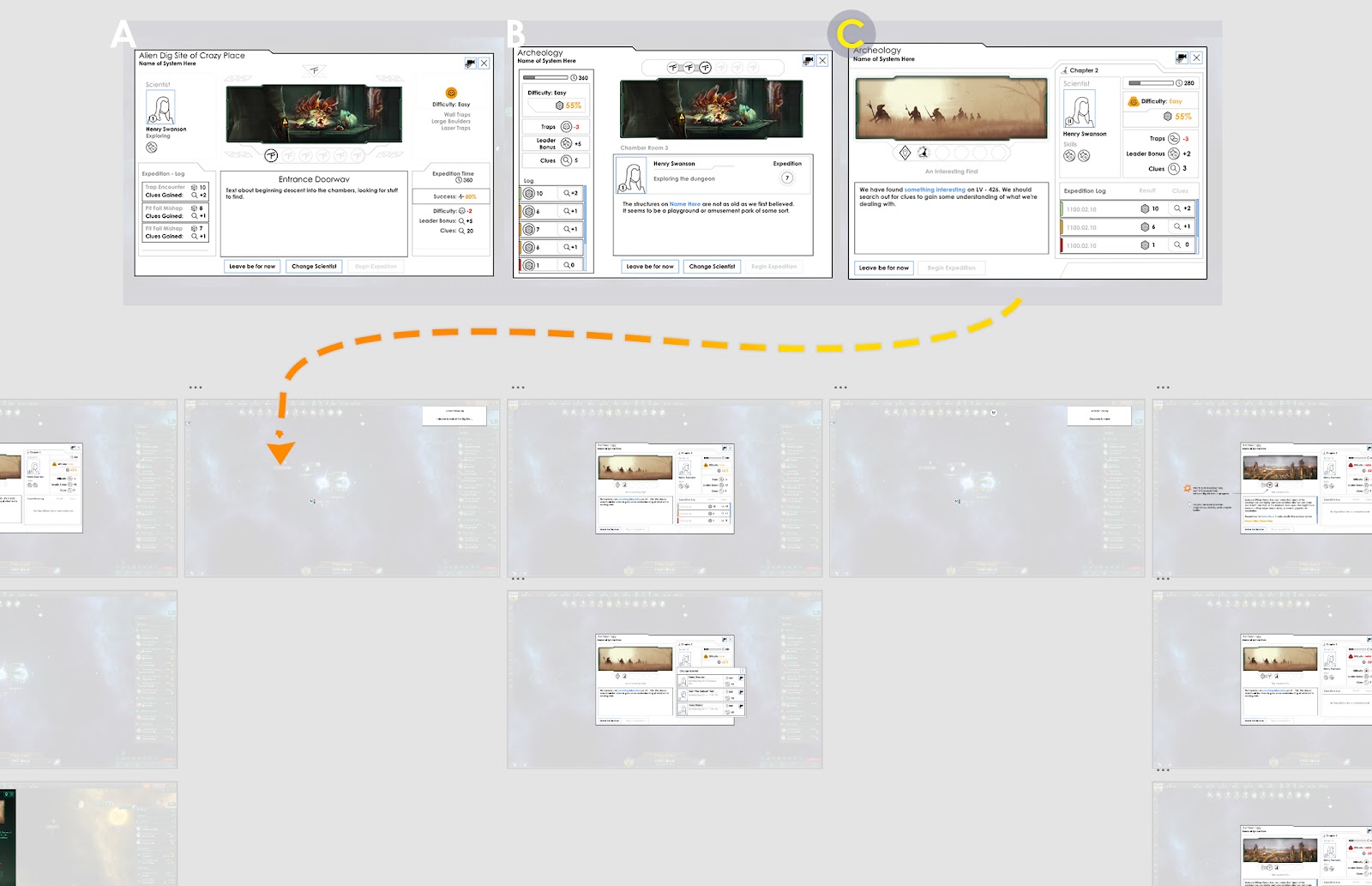 With the User flow complete I then link it up and create an interactive Prototype. The prototype allows team members to experience what we are trying to create before we set out to develop it. It’s a great low cost way to identify issues in the flow, and fix them here before investing in development.

After we agree on the UX design, we then get to finally create it in game. As you can see below, the design mostly held through to release. The text window was increased to accommodate larger story text, and ‘difficulty’ was changed to ‘breakthrough chance’ to help better understand the ‘die roll mechanic’.

User Testing
So, even though the design has now gone through many gates, we must test our designs with players and iterate based on player feedback. Luckily Paradox has a great User Research department, and so we were able to run playtests and get vital feedback which we could respond to before launch.

Well, I hope this was an informative window into how UX Design is done here on Stellaris.

Also, I read the forums and look out for your feedback as well. You all have been very helpful, so thank you for that!

Sorry folks, posting error meant the first one got binned. I assure you this is the correct DD in the only canon, official timeline.

Aye sorry everyone, it was my first post and I missed a check box to post it as a Developer. Had to pull it and re-post it, whooops!

Jamor said:
Sorry folks, posting error meant the first one got binned. I assure you this is the correct DD in the only canon, official timeline.
Click to expand...

What? No ambitious crossovers between the two timelines?

Pale Blue said:
No, why the blurred whiteboard? Is there such important info on it that you couldn't tease us? It would have been such a great opportunity to hint some of the new/reworked UI or features!
Click to expand...

Stand by for a big announcement at PDXCon next month. Until then we will have to remain mysterious.

Harlot said:
What? No ambitious crossovers between the two timelines?
Click to expand...

UltimateTobi said:
Will it be live streamed on Twitch @ParadoxInteractive and will it be watchable afterwards in case one missed it?
Click to expand...

orochi2k said:
I am working on repairing the blurred image.
Click to expand...

You haven't spotted the platypi yet.

Pale Blue said:
Yes seeing scrapped tries would be cool. Something that you guys thought would work, but at some time in development showed to be flawed.

Also since you aren't that long working on stellaris, how do you think about the UI previously done? What would you change if given the chance?

Also most importantly can we get an UI background color that changes depending on empire color? I don't want the green anymore and I don't want to rely on mods for different colors.
Click to expand...

I did showcase a few scrapped designs in the larger image. I showed versions A & B that eventually evolved into version C that we went with for the Archeology UI.

Stellaris has a great UI, though there is always something that can be improved. I created the designs for the updated Planet View, for example. I'm on the look out for community feedback on features, though. You all help give direction on what to improve, and how.

Zorbeltuss said:
I wonder though, does your user testing and user research department take into account issues for players with limited mobility?
Because Stellaris is the game with the most issues by far on that front (of the ones I've played), and even when I want to play it I often decide not to because of this.
Click to expand...

With regards to testing for colour-blindness and/or limited mobility, this is something that we'd absolutely love to do! This becomes tricky to accomplish, however, with restrictions that we cannot ask participants to give out information about any of these specifications due to GDPR regulations.

We'd have to investigate further on how this sort of testing can be conducted, but would likely involve outsourcing this - and ultimately not being as involved in the process - to an external agency based where this is not a limitation or restriction to the process.

Feedback, on the other hand, is always very much appreciated on this front and absolutely welcomed should you have any.

Long Game Short said:
May I ask what software are you using to make an interactable prototype? Me want.

Another big question: will we ever get custom hotkeys? In any of Paradox games? Is there a technical reason they aren't implemented yet?
Click to expand...

I use Sketch and Adobe XD. Sketch right now has basic functionality, but with XD you can set up transition animations as well as test your designs with a controller.

Hi all, I'm Jamor and I'm the producer on Stellaris. I run the team's time and budget, the boring biz bit, while grekulf is the creative and design lead.

I publicly acknowledge there are AI and performance issues in the game right now.

I want you to know that maintaining things like AI and performance is a big and neverending struggle, especially on a game that is growing as large as Stellaris has. There's no one-button magic bullet solution that will fix it overnight. In some patches it is stronger, in others it lags behind. I have to follow my agreed release schedule and juggle the not-unlimited time and personnel I have to deliver that, but I can tell you that whatever I can possibly spare goes in to bug fixes and improvements. We're Paradox, we don't release a game and patch it twice and call it a day, we are in it for the full marathon. I was a PDX fan for a decade before I worked here (HOI 2 and onward) and maintaining that long term commitment is my personal guarantee to you, as a fellow fan.

The reason there's been no public news about fixes or improvements on AI and performance is simple: there are none yet. I'm not going to pull the wool over your eyes and promise something until it's done and dusted and in my hand to give. That's not my style. When we have it, you'll see it in a patch note. Until then I don't want to string people along with false optimism and empty promises.

About the process focused dev diaries: we don't want to go completely radio silent in those times before official announcements. Right now, we have our biggest max visibility PR event on the calendar coming up, PDXCon, and we naturally want to get the most eyes on us when we reveal our future plans. We need to get the word out with highest public impact so we can keep supporting this game and others, for ever. So, in moments like these, dev diaries and official communication will have to be about other things that won't spoil our planned reveal. Process stuff, an under the hood glimpse at how games are made, is interesting to some, but not all. If you don't dig it, just please bear with us for the official announcement and then you'll get a ton of in-depth feature DDs after that. The alternative is for us to just go completely quiet during those pre-announce high intensity dev periods, and I don't think anyone wants that.

We're here, we're working every day to make this thing better for you, our fans and supporters. We tell you as much as we can consistent with the needs of basic business security, and really prize our unusually close contact with our community, certainly unprecedented for a developer of our size. We want to keep that, so please be decent to my staff, and each other. Thanks for sticking with us through this journey, and there's much more to come.
Show hidden low quality content
You must log in or register to reply here.
Share:
Facebook Twitter Reddit Pinterest Tumblr WhatsApp Email Link
Top Bottom