Good news everyone! We are back with another dev diary! This time we’ll look at the spaceport. 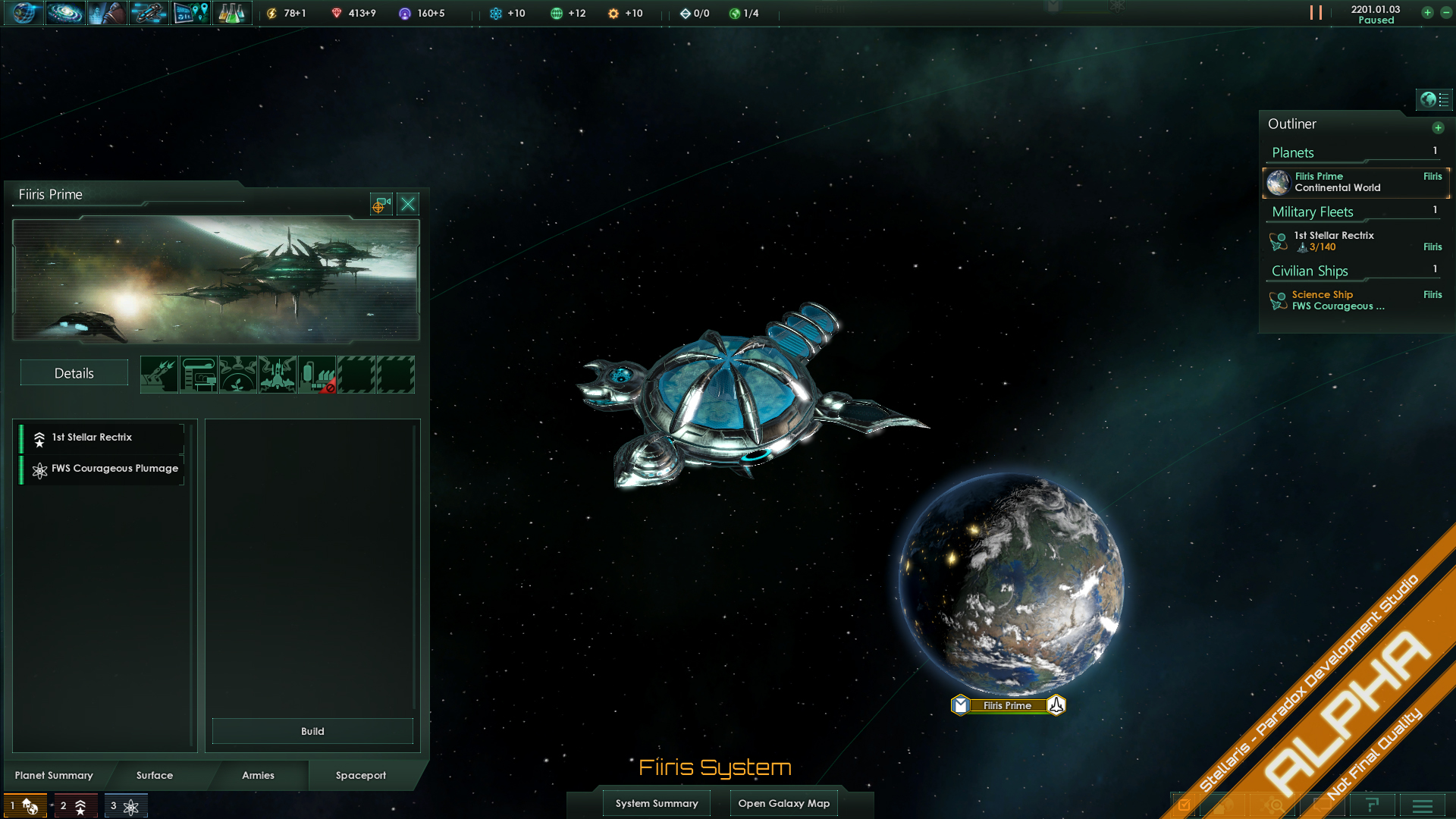 Modules are attachments that can be added to spaceports, allowing further specialization or utility. Like many other things in Stellaris, some modules may only be available to empires of a specific ethos while others may be the result of a rare scientific breakthrough. Their effects can range from additional defenses (Reinforced Hull Structure for added toughness, Fighter Squadron to combat raiders), benefits to economy (Hydroponic Farms to grow additional food, Solar Panels to gather energy) and ship support (Crew Quarters for lowered upkeep of ships while docked) as well as refining and utilizing different rare resources. This all comes at a cost of course. A fully upgraded and equipped spaceport is a huge investment and the loss of one may alter the course of a war.

A rare resource is any resource showing an abnormal or useful behavior when processed. The uses can range from financial to destructive and some resources offer multiple effects depending on their use. A source of Engos Vapor could either be used to boost the thruster speed of all ships built within the spaceport or be pumped into the local atmosphere to soothe the local populace. Monopolizing a few of these resources offers great potential for a trade empire to flourish, or a warlike one to take whatever else they desire. 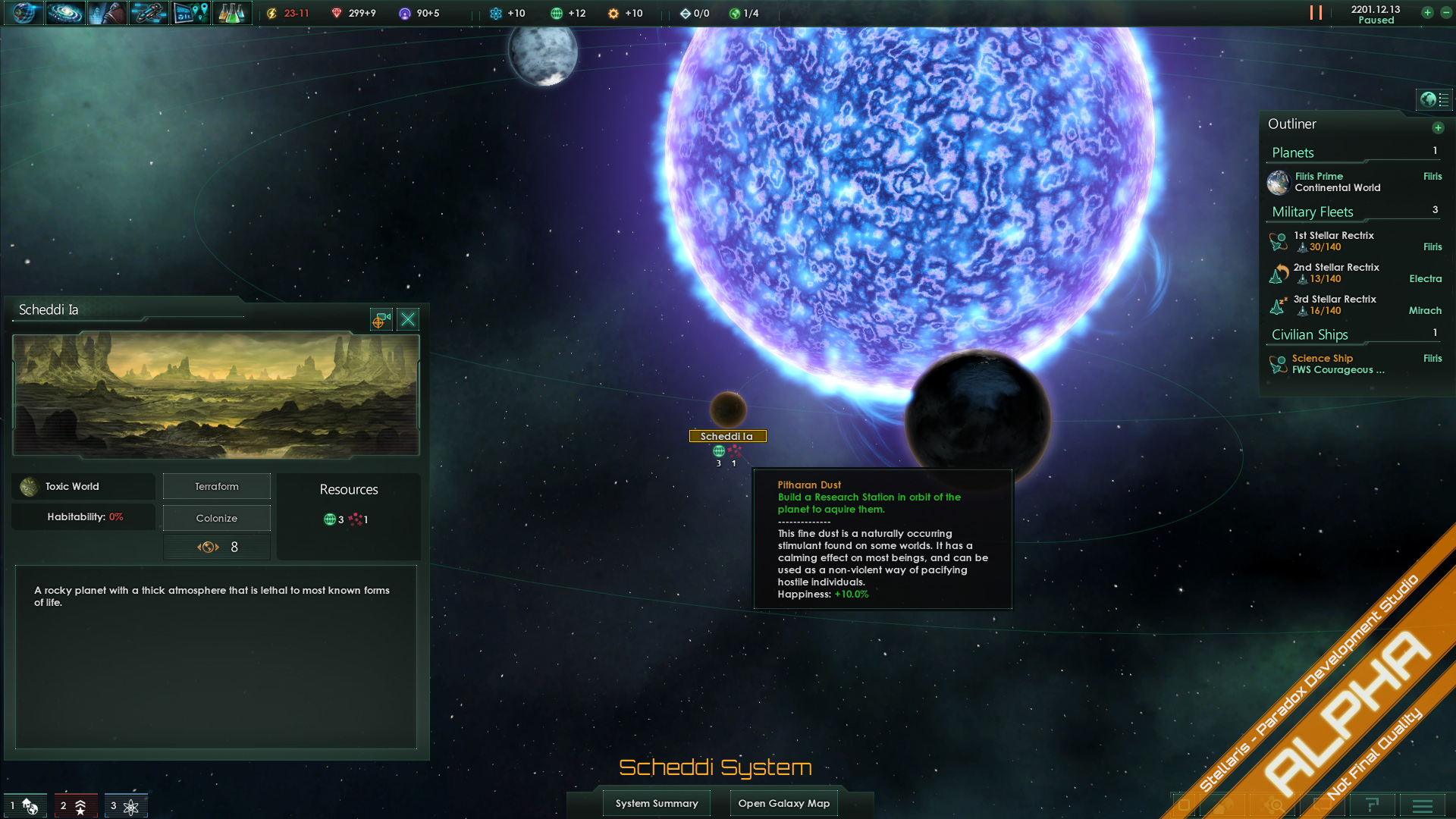 We’d like for spaceports to be something players customize and develop according to their playstyle, either by covering weak areas or further enhancing their strengths. The decision where, when and with what modules to build a spaceport will also be heavily influenced by the planet it orbits and how close it is to potential danger.
The rare resources should ideally provide a source of power and tension in the game. We’ve seen some players go for strategies based on controlling specific resources while some players prefer a more opportunistic approach, adapting to whatever they might happen upon. Others simply prefer to grab everything they can to better control where, and by who, they are used. Why risk the uncertainty of war when supplying both sides with the means of destruction ensures profit regardless of outcome?

(We’ll discuss further details on trade at some point in a future dev diary.)

P.S. I forgot to mention, next weeks dev diary will cover the technology system!
Last edited by a moderator: Jan 28, 2016
Reactions:

So it sounds like space stations are something similar to the way they are handled in Galactic Civilizations. When you say that some resources are "destructive" does that strictly mean that they are used to enhance fighting ability, or can the resources themselves be used for destruction?
Expand signature
Elf Kill Count: 0 (Awaiting Runemaster)

grekulf said:
First. In all seriousness though, nice
Click to expand...

What will the next DD be about?
Expand signature
How does a mere and gross materialist like me, with no expectation of a life to come, decide what, if anything, is worth caring about? (...) A life that partakes even a little of friendship, love, irony, humor, parenthood, literature, and music, and the chance to take part in battles for the liberation of others cannot be called 'meaningless' except if the person living it is also an existentialist and elects to call it so. It could be that all existence is a pointless joke, but it is not in fact possible to live one's everyday life as if this were so.

So, there will be catnip in the game! Hallelujah! :3
This may be a very interesting part of the game. Rare resource's as a source of destructive or peaceful power.
Expand signature
One Game to rule them all, One Game to find them,
One Game to bring them all and in the darkness bind them
In the Land of Paradox where the playtapi lie.
Reactions:

Jokes aside I hope we'll be able to scrap modules for spacestations? I still have nightmares about CK2 before they added in modding support for removing holdings.
Expand signature
Baal: You can't be serious.
O'Neill: Yes I can... I just chose not to.

Dare to make trade and economy simplistic or I'll hang you devs personally >
Expand signature
Why do people continue to underestimate the stupidity we are capable of?
Status: Studying Video game development

Are you sure you'd not rather have a working space station with a competent crew?
Expand signature
Baal: You can't be serious.
O'Neill: Yes I can... I just chose not to.

Jormungandur said:
(We’ll discuss further details on trade at some point in a future dev diary!)
Click to expand...

Are you interested in a trade agreement with Space England?
Reactions:

fighters are in
fleets will be big (we will control 100`s of ships )
spaceports are gonna be fun.


some questions come to mind:

do we build space ports per planet or per system? (could i have lets say 3 level 5 space ports in the same solar system?)
so we have spaceports (build by the colony),research stations (build by construction ships) any other types?
Expand signature
Soon to be a Major religion near YOU!
Reactions:

So will spaceports have their own pops, then?
Reactions:

What will the next DD be about?
Click to expand...

The DD next week will cover the technology system!

Jokes aside I hope we'll be able to scrap modules for spacestations? I still have nightmares about CK2 before they added in modding support for removing holdings.
Click to expand...

Yeah, you can swap modules for a cost.
Reactions:

Nice, I really like that space ports are to have real strategic value rather than being easy to replace with a construction ship. Trade empires... Space Carthage play through confirmed.

As an aside, that star in the Scheddi system looks fantastic.
Reactions:

octogon8351 said:
As an aside, that star in the Scheddi system looks fantastic.
Click to expand...

i was so busy trying to get new information from the screen i forgot to just look at them....so thank you....because yes that is beautiful!
Expand signature
Soon to be a Major religion near YOU!
Reactions: