Jump to latest Follow Reply
Menu
Install the app
You are using an out of date browser. It may not display this or other websites correctly.
You should upgrade or use an alternative browser.
Stellaris 46143 Bug Reports 26145 Suggestions 15701 Tech Support 2530 Multiplayer 356 User Mods 4369 Stellaris AAR (After Action Reports) Console edition 1097
Show only dev responses

We have now entered 2020 and as you might know, we announced at PDXCON last year that we have some exciting things coming out on Stellaris console this year. We are aware that it’s been a bit quiet on our side - but it doesn’t mean that things have been standing still in development and behind the scenes. The developers have been (and are still) working hard on new content that will be released this year and focus has been on implementing the huge changes we’re going to be making to the game.

Since it’s been a few months since our latest console update we wanted to provide a small sneak peek of our work in progress. The main challenge has been developing and implementing the new UI required to pilot the new version of the game coming to Stellaris: Console Edition.

Just to give you an idea of how comprehensive these changes will be, we are looking to upgrade or include features pertaining to the entire planetary system and associated economy, the introduction of the Galactic Market, a new fleet manager, updated shipyard view and new main title screen to name but a few.

Stellaris: Console Edition will jump straight into the 2.2 version of the game (‘Le Guin’) and thus a large set of core game features are being reworked. We will talk about these feature changes more in-depth further on, but for reference, the same gameplay changes happened to Stellaris on PC in December 2018.

The below screenshots will give you an idea of what to expect with the coming update. You’ll see some of the huge amounts of work that’s been going on adapting the UI for the new features to consoles, as well as how we’re looking at implementing some of the new features that are part of the 2.2 Le Guin Update. The features we are showing are all part of the next free update that will be available later in 2020 for all console players.

Please note the screenshots below are not final and features/implementations may change between now and the release later in 2020. 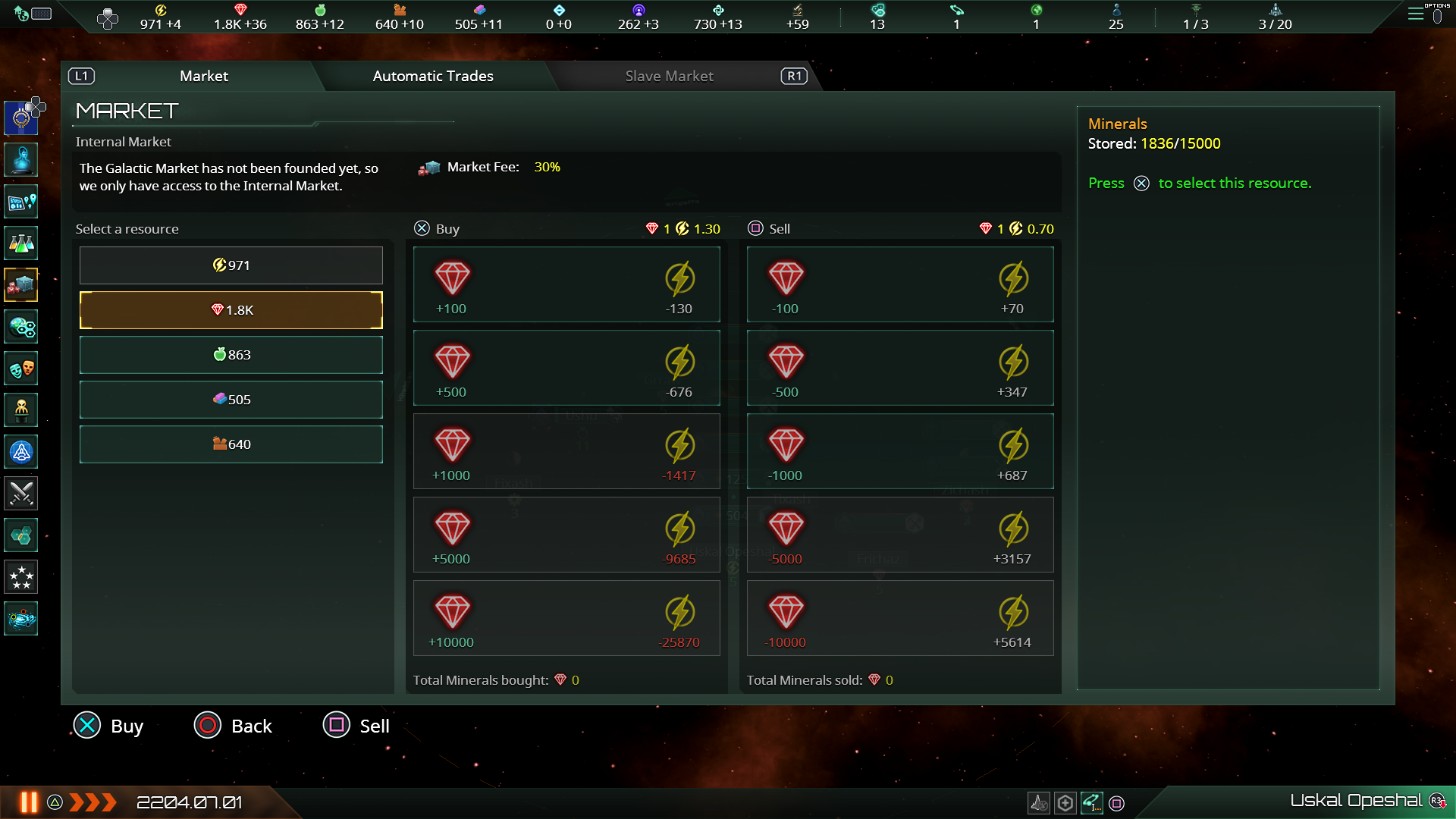 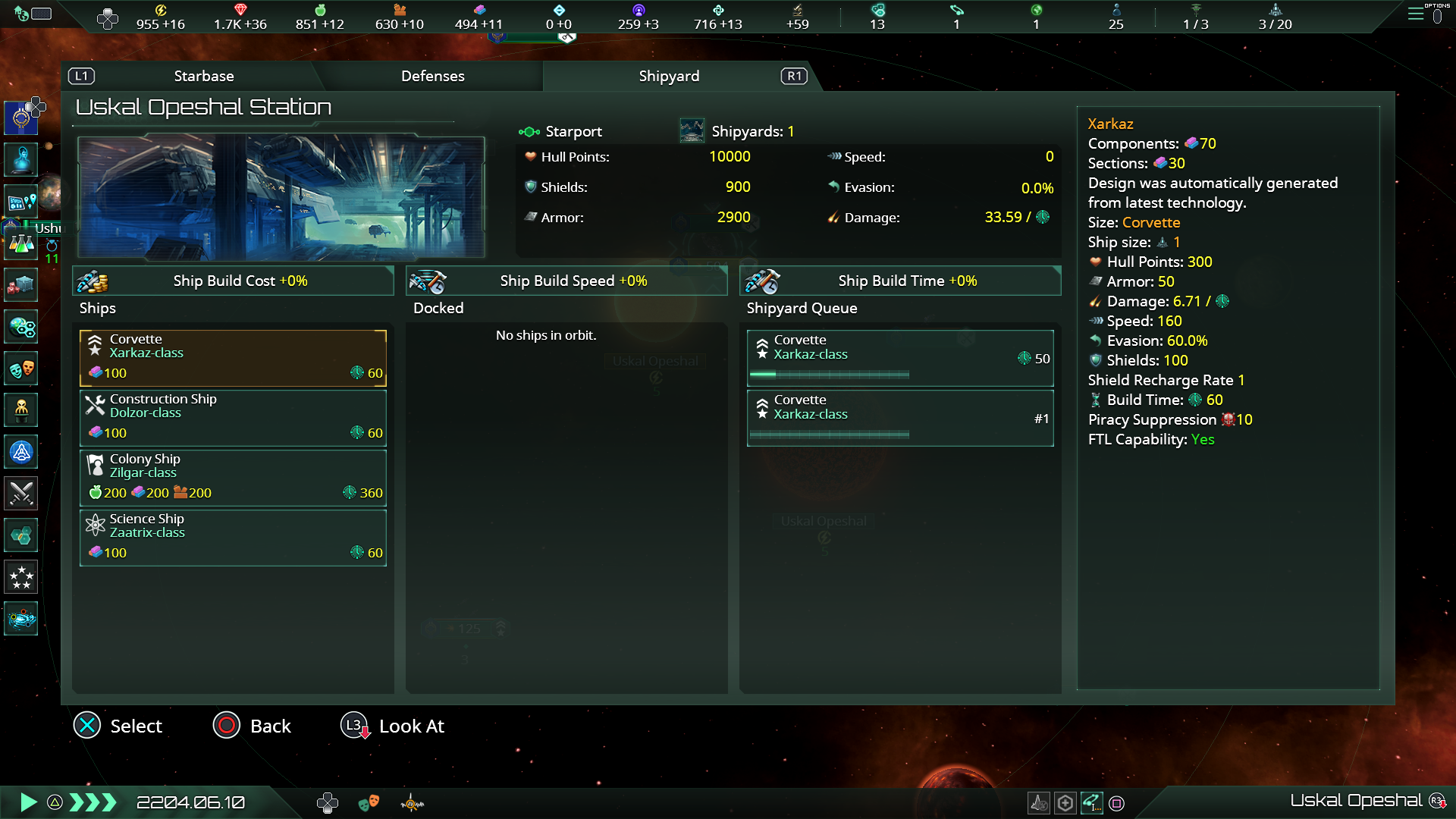 Please note that the above is still a work in progress and the screenshots might not reflect or represent the finalized product. We will provide updates moving forward as we have them, leading up to the next release later this year. Thank you for your patience and for playing the Stellaris console edition.

Wow so now i see why we have been left in the dark.
All these months of work to put the Console version closer to the PC version.
So the next update will jump us all the way up to 2.2 or is that the goal for the overall year?

Something about Space and Medieval Europe

Will we see an update of species creation regarding multi-species civilizations such as with the syncretic evolution civic? From what I've seen from others the secondary species is currently randomly generated instead of the user being able to design them like on pc.
N

Awesome so glad to hear the Console Edition is still being worked on, having seen nothing but PC updates on the Stellaris Facebook page. As well as the announcement of the mobile game, left me a little worried that this game was put on the back burner for good.

Since we're jumping right to 2.2 is it safe to assume we will be getting both Apocalypse and Megacorp expansions this time around? If we won't be getting Megacorp, and if the subject of what expansions we can expect can be discussed at this time; why the jump to 2.2 and not say 2.1.2?

As my understanding of the PC version 2.2 mechanics were in preparation for the new Megacorp expansion, so is this a subtle hint that we will be getting that expansion? (Blink 10 times quickly then 15 times slowly if yes, I won't take no as an answer)

A side question I have would be can we expect any of the new mechanics being tailored to Console to work similar to PC? My biggest wonder being jump drives, will we finally get that sought after leaping ability? I do hope we do.

Oh very nice, can’t wait.
One think I really love about the console version is the UI and how clear it is compared to the PC version. Even the Icons for things look better
Toggle signature
Thorbjorn42gbf:
I love how basically all the rest of the worlds gamers go "My god more dlc's? why?" while people playing paradox games go: "YES DLCs EXPANSIONS GIVE ME NOW"

GENERATION 41: The first time you see this, copy it into your sig on any forum and add 1 to the generation. Social experiment.
D

can not wait for this update as I saw a lot of youtube vids from PC players about these updates and I would love them as well. Hope not to long of a wait though
H

Since I'm new too, we can welcome each other welcome!
This is amazing news, I have fallen in love with stellaris and am so glad there is new content.

What approximate timeline are we looking at for content release?

Is there going to be several dlc dropped at the same time, or one by one?

This is excellent news. Thanks for letting us know about what's coming with something more concrete than the trailer in December - I can finally start to get hyped again!

Simply amazing, but please, please, keep us updated on this.

AC4above said:
Simply amazing, but please, please, keep us updated on this.
Click to expand...

This.
I've said many times before that this kind of support and communication is exactly what the console version needs. Even if this update isn't out until summer, I'd appreciate dev dairies on how it's going - similar to how the PC edition is.

So presumably the goal will be to close the gap between pc release and console port.

I don't play the console version myself, but I'm glad to see those that do aren't being left out in the cold.

Any idea as to when this will release? Like summer or fall?

New ... It maybe why it was sooo long to have news, well thx and really appriciate more details
I

This is nice to hear, but are there any plans to fix bugs that exist in the current version, especially the bug that causes the AI to stagnate in the late game?

Hey can the PC get that fleet manager please? That looks so much nicer than the PC version.

Extremely pleased to hear the news! Looking forward to the changes, new content, etc. Any chance we can get a general projection on the start of releases?
R

@Aceparadox
Wow, I am looking forward to this. Since it is still work in progress i guess there is no point in asking for an release date or something in that direction, since I guess that no one can say how much work it will take to port that on console and make it work porperly. But maybe you can tell us if there will be a new season pass or if the coming DLCs will only be available seperatly?

What makes me laugh is the people who are disagreeing. What you don’t want continues support?
Toggle signature
Thorbjorn42gbf:
I love how basically all the rest of the worlds gamers go "My god more dlc's? why?" while people playing paradox games go: "YES DLCs EXPANSIONS GIVE ME NOW"

Voidlord said:
What makes me laugh is the people who are disagreeing. What you don’t want continues support?
Click to expand...