Menu
Install the app
You are using an out of date browser. It may not display this or other websites correctly.
You should upgrade or use an alternative browser.
Stellaris 42205 Bug Reports 22493 Suggestions 12723 Tech Support 2126 Multiplayer 323 User Mods 4097 Stellaris AAR (After Action Reports) Console edition 915

Description
AI not upgrading their Starbase in timely manner [2.6.1](65d2)

What version do you use?

Do you have mods enabled?
Yes

Please explain your issue is in as much detail as possible.
Playing on Admiral difficulty, the AI all seem to have amassed huge stockpiles of resources that are going unspent. Alloy is a big one and when I look around their empires, I notice that they are hardly upgrading their starbases. This has the effect of massively depressing their Naval Capacity.

The Economic Minister seems to be doing its job, but whatever part of the AI is responsible for upgrading starbases and filling them with modules is not working.
1. They need to put more emphasis in starbase upgrading
2. They need to be able to upgrade starbases and modules simultaneously.

Steps to reproduce the issue.
1. Play game at higher difficulty
2. By about 2240 or 2260 open up console and look around at various AI. Observe their resources, naval capacity, and their starbases

"You will not argue with, comment on or question the actions/authority/ or comments of the Paradox staff (Administrators, Moderators, etc.) in a public forum. Should you wish to do so you are directed to contact the Paradox staff via PM" - Forum User Agreement & Rules
P

I just ran a 2.6.3 beta observer game to year 2575, and there are un-upgraded or only once-upgraded starbases throughout the galaxy, it's kinda nuts (totally default settings, no mods)
P

the starbase upgrade bug may be related to this bug:
https://forum.paradoxplaza.com/foru...is-ai-does-not-respect-energy-budget.1371154/

UPDATE:
Okay, so I observed an AI for like 50 years just to see what is going on and I've solved at least part of the mystery.

There appear to be a number of reason why the AI is bad at upgrading starbases. However, the primary reason is that it will only consider upgrading them when there is excess Starbase Capacity. This means that there are only brief windows of opportunity for starbases to get upgraded. For example when it gets supremacy. Also, if it upgrades enough outposts into starbases before upgrading anything it won't upgrade. So for example if starbase capacity is 8/10 and it builds just 1 starport, it can still upgrade. However as soon as it starts to build that second starport, it will stop considering any more new upgrades to existing starports.

Here is a video I took where I gave the AI a tech that boosted its starbase capacity by 2 and then watched what happened.


On top of that there are resource requirements which I don't fully understand beyond the basics.
1. It has to have surplus energy income
2. It has to have a certain amount of alloy stockpiles

Regarding alloy stockpiles (expenditures), depending on whats going on the AI adjusts what percent of that stockpile gets allocated to ship building, starbases, and upgrades. While observing, you can view the AI's expenditures by typing debugtooltip in console, and then letting it run for a day. 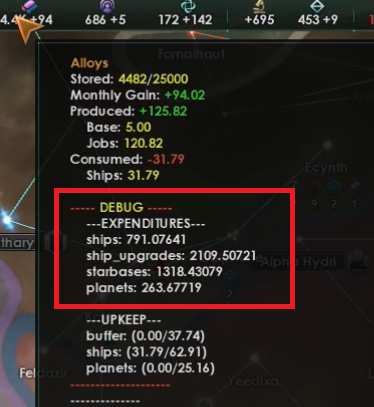 The amount of alloy expenditures allocated to starbases appear to play a role in what gets upgraded. If it's too low I think it will only upgrade outposts. Starholds cost 500 alloy so it needs 500 in expenditures to even consider upgrading it during that brief window when it can even upgrade in the first place. I believe that 500 alloy number is modified by the supremacy tradition that lowers starbase upgrade cost, however it is not lowered by difficulty modifiers that lower starbase upgrade cost.

Furthermore I'm not certain, but I also think that the amount of alloy you need to trigger an upgrade is based on the highest tech starbase you can build. So instead of 500, it might be 1250. Again not sure.

You'll notice in the picture that "ship upgrades" is taking an awful lot of alloy expenditures. This is yet one more problem that is making it difficult on the AI. Basically, when the AI is at max fleet cap and not at war, it super-prioritizes spending alloy on upgrading ships. HOWEVER there are two problems:
1. It does not go away even if you have nothing to upgrade. This makes it that much harder to build up the alloy expenditures dedicated to starbases. Only wars make it temporarily go away.
2. THE AI IS EVEN WORSE AT UPGRADING SHIPS THAN IT IS AT UPGRADING STARBASES. They are loathe to upgrade their ships.

I'm fairly certain the culprit in all this is a problem with the economic minister. However that file does not appear to be moddable so I don't know what to do.

they have even more updates here: https://forum.paradoxplaza.com/foru...-3-fix-the-ai-starbase-upgrade-issue.1371095/
P