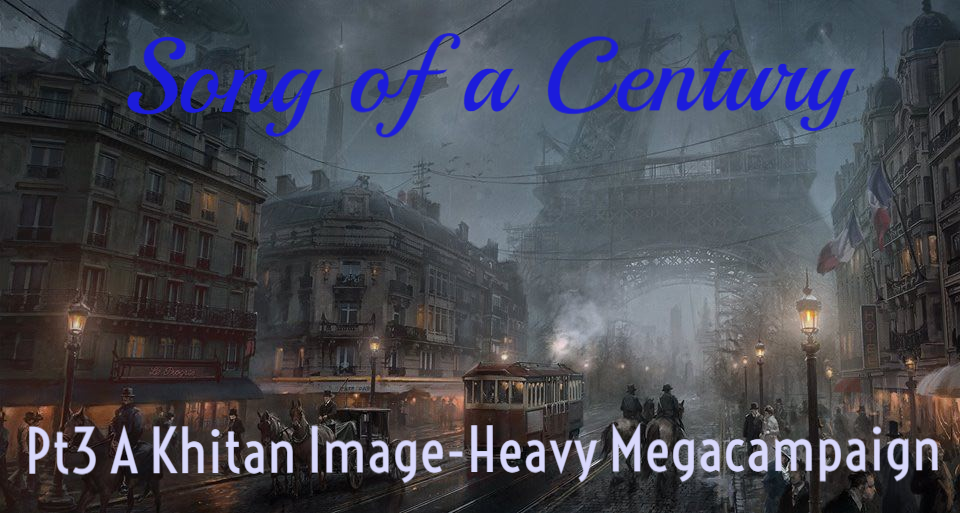 We are from hence on going to be picking up a story that began in 769, with the Rise of Xiao the Eastern Wind.

In the Centuries preceding 1444, Xiao, the founder of the Caetye and the Great leader of the Khitan people chose instead of marching east and forging the Liao dynasty as Abaoji of the Khitan did historically, they went west on a great Journey lasting generators to the foggy lands of the Black Lion. In that Journey Xiao's Grandson, Kenzai would adopt the Zunist faith, and reform it along abrahamic guidelines, styling it the Fourth Faith, a Syncretic Faith with elements of Islam, Christianity, Zoroastrianism and heavy eastern influences.

After Kenzai would come Idris, the Great, or conquerer who through the claim of his mother conquered the Roman Empire for his own as he brought the Khitan West. By the end of his life, Idris had conquered all of Greece, The Levant and Italy and had been proclaimed Augustus by his conquered subjects and the Khitan people. Idris would eventually march up the Rhine River alongside his Son, Kiran, founding the Khitan people in the lowlands between the Rhine and Seine River near Flanders.

Over the next few centuries the Khitan would gradually become Westernized both ethnically and culturally as they conquered England and all of Francia, while losing control of the territories left behind in Greece, Italy and the Middle East. The Roman themes of Idris' empire was dropped, and the Empire became simply the realm of the Khitan, or 'Cathay' after several centuries of language evolution.

Though the story did not end with a founding, The Empire would see many Emperors and Empresses, both great and terrible. Marcus II who would found a capital for the Empire on par with Rome and Constantinople. Empress Lyra the black, who brought a dark shadow over the empire and was said to have transformed into a demon before finally being cut down in her youth. Morgan the Young, the Sorcerer Empress who would restore the Empire to greatness and build the great Palace of the Royal Family. Emperor Mace the Melancholy who fell in love with his own daughter and whose death started the War of the Four Dragons. Geoffrey the Restorer who saved the Imperial family in it's darkest hour from being completly overthrown. Julianna the Just who ushered in nearly a century long golden age for the Caetye and the Khitan people. Adam the Cruel whos misrule would end that Golden Age, and Finally Uther the Hammer who after a great Collapse is now ready to restore the Empire back to greatness after the fall of the great Western War.
After the Great Western War the Khitan Empire was shattered, But Slowly but surely the House of Caetye returned to strength, First uniting Northern France and the Lowlands of the Rhine and later Striking into Germany and Central France. All the While rumours of a Strange Land called America, or Camelot depending on your cultural persuation trickled in through the major trade ports of Europe.

The Rush for America came quickly with all Major powers from Northern and Southern Europe participating to some degree and carving out thier own personal spheres in the new world. Meanwhile Those that did not participate, Namely the Kingdom of Bohemia found success in the unification of Eastern Europe under the Second Bohemian Empire, a Terrible and Powerful Nation. Meanwhile the Status quo of Iberia was bucked time and again and the Kingdom of Ferrara unified Italy into a powerful State. The Kingdom of England would form Great Britain and the Kingdom of Sweden would regain control over much of of its own region, naming itself the Scandinavian Empire.

Meanwhile in the East Chaos following the fall of the old Empires of the region led to the Rise of Persia and India, Persia followed a Radical form of Zunism rejecting the syncretism that had allowed the religion to spread far and wide. Meanwhile India was formed as a response to both Persia's growing strength but European Traders bypassing the Old silk roads by use of the cape and making landfall in India for the first time.

In East Asia the Takeda Shogunate and Emperor of China competed for Colonies in California brought on by the utter collapse of Silk road Trade thanks to the fundamentalist Persian Empire. Soon All would come to a head however when Empire finally met Empire.

Driven by personal ambition the Khitan Emperors aligned themselves with the Japanese Shogunate and Struck at the Ming Empire. In Several bloody wars lasting well over half a century the Ming fought off foreign invaders with strange customs and technology and yet held a strange familiarity about them. Ultimately however disaster after disaster and Driven Khitan persistence led to various concessions in South China, and in the Aftermath the Ming Dynasty suffered a complete and utter collapse, with the Khitan Empire claiming the Mandate of Heaven for themselves.

The Resulting Chaos would shake the Monarchies of Europe to the core. Revolution spread into Scandinavia, Great Britain, Cathay and Even mighty Persia. Though the Revolution at least in its purest anarchic form was stopped by the Brave Actions of the Khitan military and diffused by the Young Emperor Arthur Europe now stands at a precipice of Complete and Total Warfare.

All the While the once colonial administrations of America have one by one thrown off the shackles of European Overlords, declaring their own republics, Empires and democracies of various flavours in a world isolated by Geography but unified by potential.

And Now, the discovery of new means of production and the spark of industrialization is just starting to catch its kindling. The World is in Revolution but the True Fire has yet to start. The Coming Century will be one of Progress, one of Warfare, one of Revolution, Blood and Iron.
There will be a Several Chapter Prelude that will Include exactly what happened in the Gap from 1821 to 1836, To explain border changes and what not and also to truly capture the spirit of the 'Continental' Wars that will ravage Europe in this time.

A Few Goals for the V2 phase of the campaign
1. Maintain the Monarchy as long as possible.
2. Retain our #1 Spot in the World.
3. Prevent the Formation of China and Germany at all Costs.
5. Prevent the Loss of our territory from Revolution, Invasion or otherwise.
6. Open and looking for recommendations and suggestions, but ultimately the choice is mine here

Western Wind, A Khitan Megacampaign, Without Honor (Part 1), Into the West (Part 2), A Song of a Century(Part 3), and Through Light and Shadow (Part 4)

The House of Ravens a Norse CK2 AAR

Excellent.
Toggle signature
To view is human, to comment is divine.
"Be not afraid" - John Paul II
"The Christian way has not been tried and found wanting, it has been found to be hard and left untried" - GK Chesterton.
Current AAR: The Thorn of the Rose HoI4 The Future of the Red Lion Stellaris (on hold) Journal of the Silver Daggers Battletech
Completed AAR: In Memory of France EU2 Pax Humanitas Stellaris 1.4.1 A VictoriAARn Education Victoria II 3.2
The Great Trial Stellaris 1.9.1A Game for Lisan: Belgium EU4 1.25 Account of RCAF Bomber Command HoI4
Other AAR: Entering the First Court - Kanem Bornu EU4 1.22
View my full AAR list at The Inkwell Red Special Cookie ●
This line is necessary since the forum re-work to enable the links in the last line to be used.

Captain of the Imperial Guard

Subbed, I imagine the continental wars will soak Europe in blood during the prelude.

Subbed, I can't wait for the prelude
Toggle signature
My AAR (French) :

Subbed. Put the Revolutionary scum in their place.

also separate the asian Khitan from the European Khitan will ya?

I am of course along for the ride. May the monarchy ever reign!
Toggle signature
Playing as House Arrius in This Is Madness 2 - Imperium Sine Fine
Current Senator: Magnus Arrius
Previous Senators: Duilius Arrius, Gaius Arrius, Marcus Arrius

This will either be a song of revolution or a tale of an alternate path. I hope that there will be some interesting events
Toggle signature
Currently Writing: Nothing

I won't take any sides, but I'm just going to remind people of the focus tree that @dragoon9105 teased for HOI4. Make of it what you will. 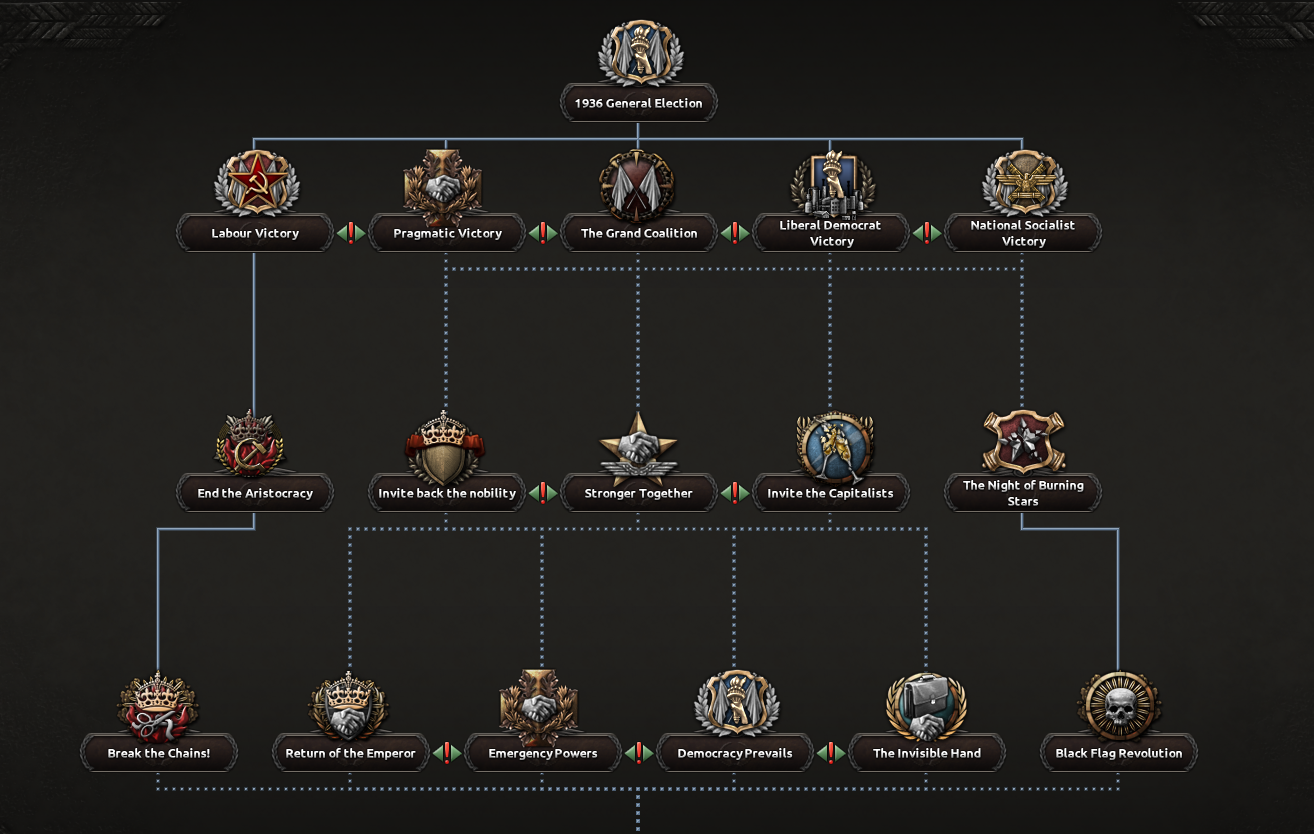 It may be for someone else though

Sumireko Usami said:
It may be for someone else though
Click to expand...

zenphoenix said:
Is there really any other major country led by an Emperor who is called an Emperor (and not a regional title)?
Click to expand...

it could be one of the requirements to restoring either A.The Byzantine Empire/getting Brasil Back or B.Great Aegyptia

Sumireko Usami said:
it could be one of the requirements to restoring either A.The Byzantine Empire/getting Brasil Back or B.Great Aegyptia
Click to expand...