Menu
Install the app
You are using an out of date browser. It may not display this or other websites correctly.
You should upgrade or use an alternative browser.
Prison Architect 280 Campaign 1 Escape Mode 6 Modding 22 Suggestions 135 Support & Bug reports 787 Mobile 53

Welcome to Show and Cell, our little corner to showcase the creativity of the Prison Architect community! Here you can find some inspiration and read about the people that create fan art, gameplay videos, or building some awesome prisons!

If you want your prison to be showcased next, tag us on twitter (@PrisonArchitect) and use the hashtag #showandcell! Feel free to send us a DM with any questions! 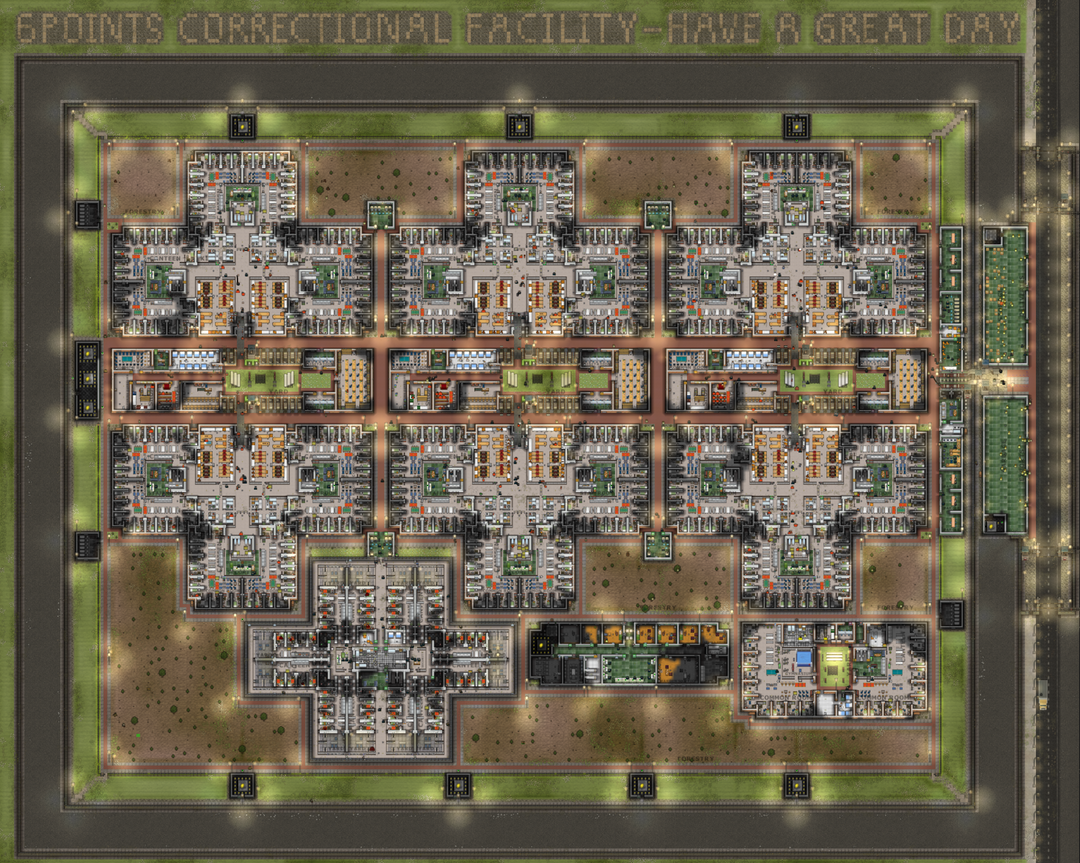 Show and Cell are finally back, and this time will dive into 6 Points Correctional Facility, created by mkit3. This amazing prison was inspired by aerial photographs of real-life maximum-security prisons. We had the pleasure to ask mkit3 about the creating process.

How long did it take to create 6 Points Correctional Facility?​

It took me about 96 hours of in-game time for the save game that was uploaded to the workshop. I didn’t reload from an earlier save while building this prison at all, so that’s accurate.

However, I also did some planning of the cell block layout for about 10-12 hours on an empty map; and I tried several designs until I was happy with the three-pod design for a housing unit that I ended up using for this prison. Thus 116-118 hours would be a better estimate if you also take into account pre-planning.

Finally, I did indicate in the description that this prison is the result of more than 600 hours of experience in the game, and that is absolutely correct in the sense that I learned a great deal from my previous two ~100h prisons. 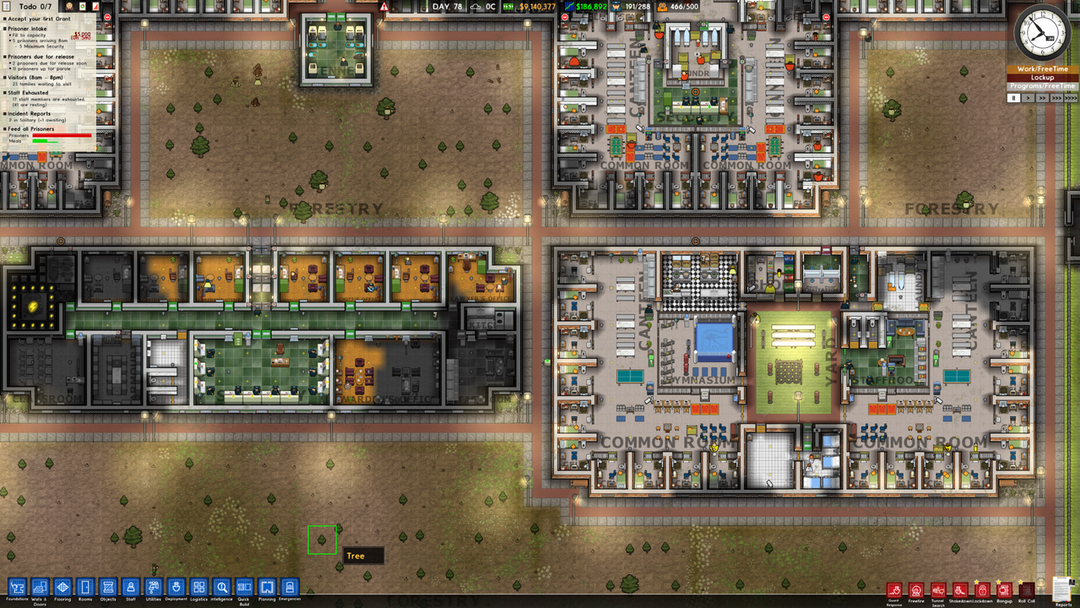 What was your goal when you started this prison?​

My goals were to build the ultimate, best maximum security prison after such extensive experience in this game, as well as lots of research that I had done on real-life prisons. Best in terms of profitability, control of prisoners – 0 staff fatalities were a must, reoffending rate and inescapability in escape mode.

I also wanted to both surpass my then-best prison – NoESC SuperMax – in terms of these achievements. Finally, I wanted to give my new prison a layout that resembles the aerial perspective of real-life prisons. As in you see the shape of the buildings and walls, and it’s immediately clear that this is a penal institution!

How did you come up with the name?​

The real-life Five Points prison has five housing units, and that is simply where the name comes from. My prison has six housing units, so I simply called it “6 Points”. I used the number “6” instead of the written “six” just because that made my welcome message at the top of the screen fit. 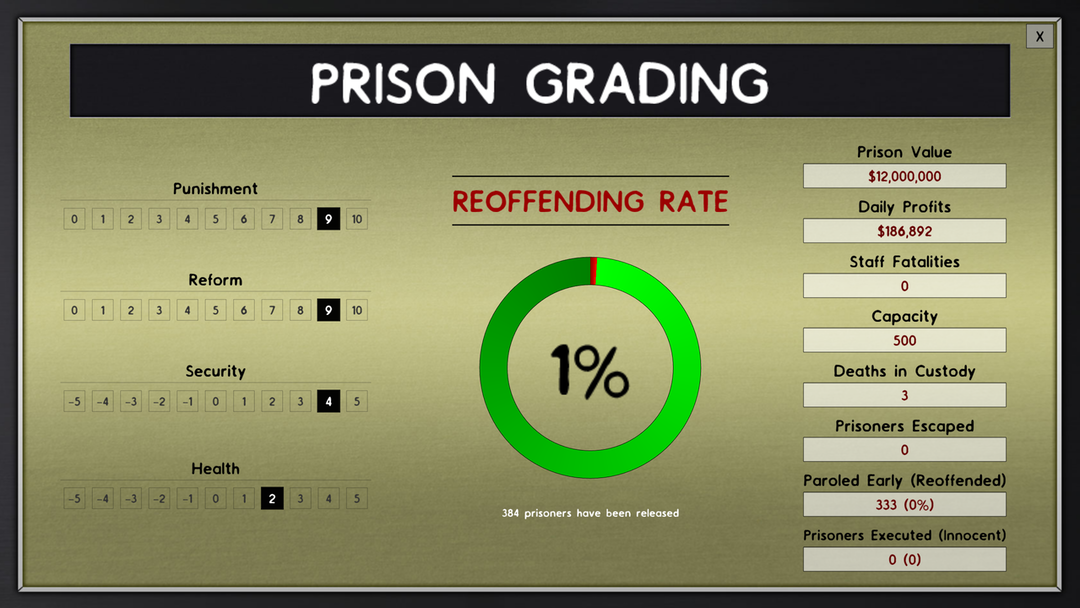 Anything else you want to mention about the prison?​

I believe the grading stats speak for themselves: achieving a stable 1-2% reform rate with maximum security prisoners is quite extraordinary in this game. At least I haven’t seen it achieved before in a workshop prison. On top of that this prison is also practically inescapable in escape mode without the help of bugs or cheats.

Perhaps something else that is worth mentioning is what I learned, or better what building and running this prison has taught me, about dealing with problem prisoners. When I started out with this prison, I thought that you would have to put legendary, volatile or deadly prisoners in a separate supermax wing in indefinite lockdown in order to keep the peace. However, because my prison was functioning so extraordinarily well at satisfying needs - and inciting fear where needed - I was able to allow most legendary prisoners to join the general population. They didn’t actually get involved in a single incident!

There was a rather regrettable story in the prison’s early days where I had a legendary inmate and I put him in permanent solitary before my supermax wing was complete. He escaped from his solitary cell several times and was stopped by a sniper each time. As a result, his reoffending prediction went up from 32% to 97%. Eventually, he was killed by my armed guards. I felt like I failed this prisoner because I made him worse than what he arrived at, and he eventually became a problem prisoner because of the way that I had mistreated him. 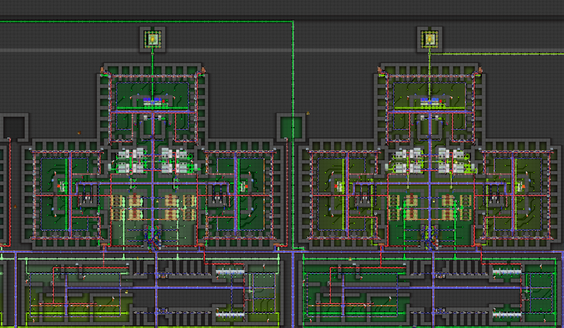 Did you plan the layout of the prison before you built it?​

This is an interesting one. I did actually do some extensive preplanning for my new housing units on a separate, empty map. Like in my previous prison, NoEsc SuperMax, I used what is called a direct supervision layout. So instead of arranging cells in corridors like in a hospital, they are arranged around a central guard station so that prisoners are always in view of the guards. This helps eliminate violent incidents quickly before they can turn into riots. Prisoners also misbehave much less often when they are being watched.

What I think is really cool is that I have adapted this layout from real prison design principles, so I think it speaks for the game that a layout that works for real prisons also works really well in Prison Architect!

However, I didn’t initially plan to build the final version of the prison on the map that I started building on. I just wanted to test whether my new housing unit layout works! So what actually happened is that I started building one of those housing units just pretty randomly placed on the map just to see how well it would run, and then sort of went from there. I even forgot to turn off the automatic intake, so I was delivered with a truckload of prisoners on day 2, and I had no facilities ready to house them. I hurried to create cells for them, but of course I had no reform programs running yet. What I think is even more remarkable is that these early prisoners were the only ones among the 333 released inmates that went through my prison who actually reoffended. You can see this by looking at the history of the reoffending rate.

How long have you been playing Prison Architect?​

I first started playing the game in the summer of 2017 and I have been coming back to it on a regular basis ever since. Probably the most amount of time that I spent on the game was during the Covid-19 lockdown and around the time that Cleared for Transfer was released. 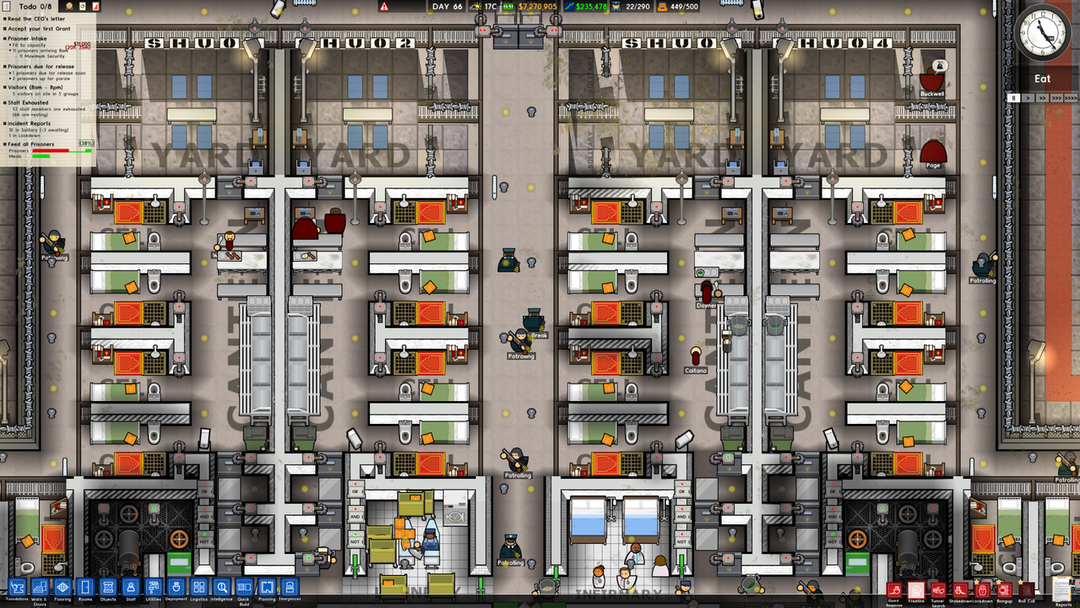 What made you start playing Prison Architect?​

Somehow I have a longstanding interest in prisons and punitive criminal justice, especially given the large cultural differences that exist between the USA and European countries, When I first read about sentences of 20+ years for robbery, mass incarceration and prison gangs in the US, I could hardly believe the stark differences to the relatively tame prisons in Europe. I think on an emotional level, I was most affected by the article about Kalief Browder in the New Yorker that I read in 2014.

What I think is really interesting about prison architect is that the game can really help you understand how such comparatively inhumane treatment of prisoners can become normalised: If you play the game, there’s a natural impulse to harshly punish prisoners who misbehave, but they are more likely to misbehave the worse you are at meeting their basic needs. Then you start punishing your prisoners harsher, and they misbehave more. It is a vicious cycle, and in the end, you end up putting some of them in indefinite solitary confinement, which is exactly what has been happening in the US.

Any tips for someone new to the game on how to get better at planning and building their prison?​

First of all, I think the most important part of any game is to have fun and not overthink things too much. I personally do enjoy theorising and pre-planning to a considerable extent but have only started doing so after I got a good handle on the mechanics and general feel of the game. 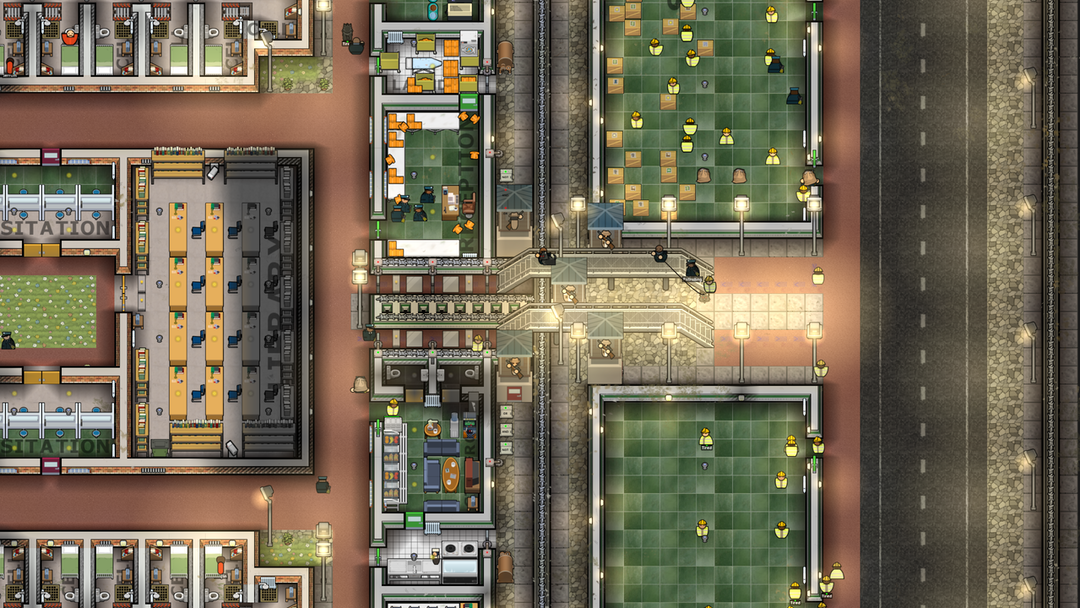 Do you want to try this prison? Then you can get it here!​