Hello, and welcome everyone! This is my... 4th? 4th AAR that I'm doing, and I think this is gonna be a very chill and relaxed one. Let me see what nation I shou- oh shoot, I dropped my map! Hopefully everything looks ok and nothing broke... 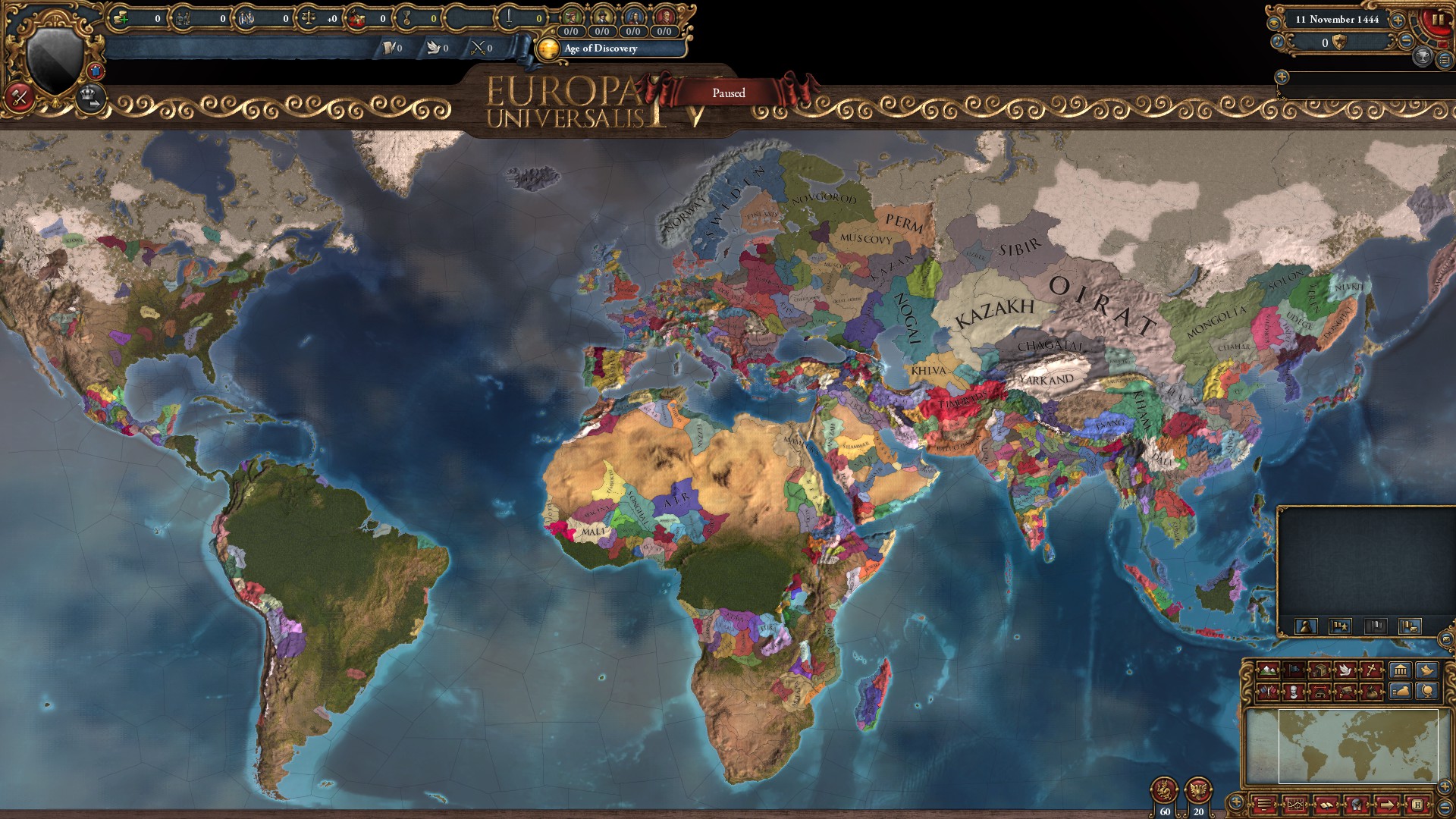 That's right, this AAR is about a world where I have gone through EVERY SINGLE NATION ON EARTH and made sure that all possible nations with cores in 1444 were released, as well as made sure that there are NO SUBJECT NATIONS. That's right, everyone is FREE, and with lucky nations off, this is could lead to some wild times! (Side effect does include a 5 year truce with the former overlord, but that's fine.)

And my ruling for which nation gets what province is as follows: If it was a core held by another nation at 1444 start, it gets release. If it belongs to more than one nation, it goes to the first nation on the core list. Simple and effective.

Let's take a look at the damage done. 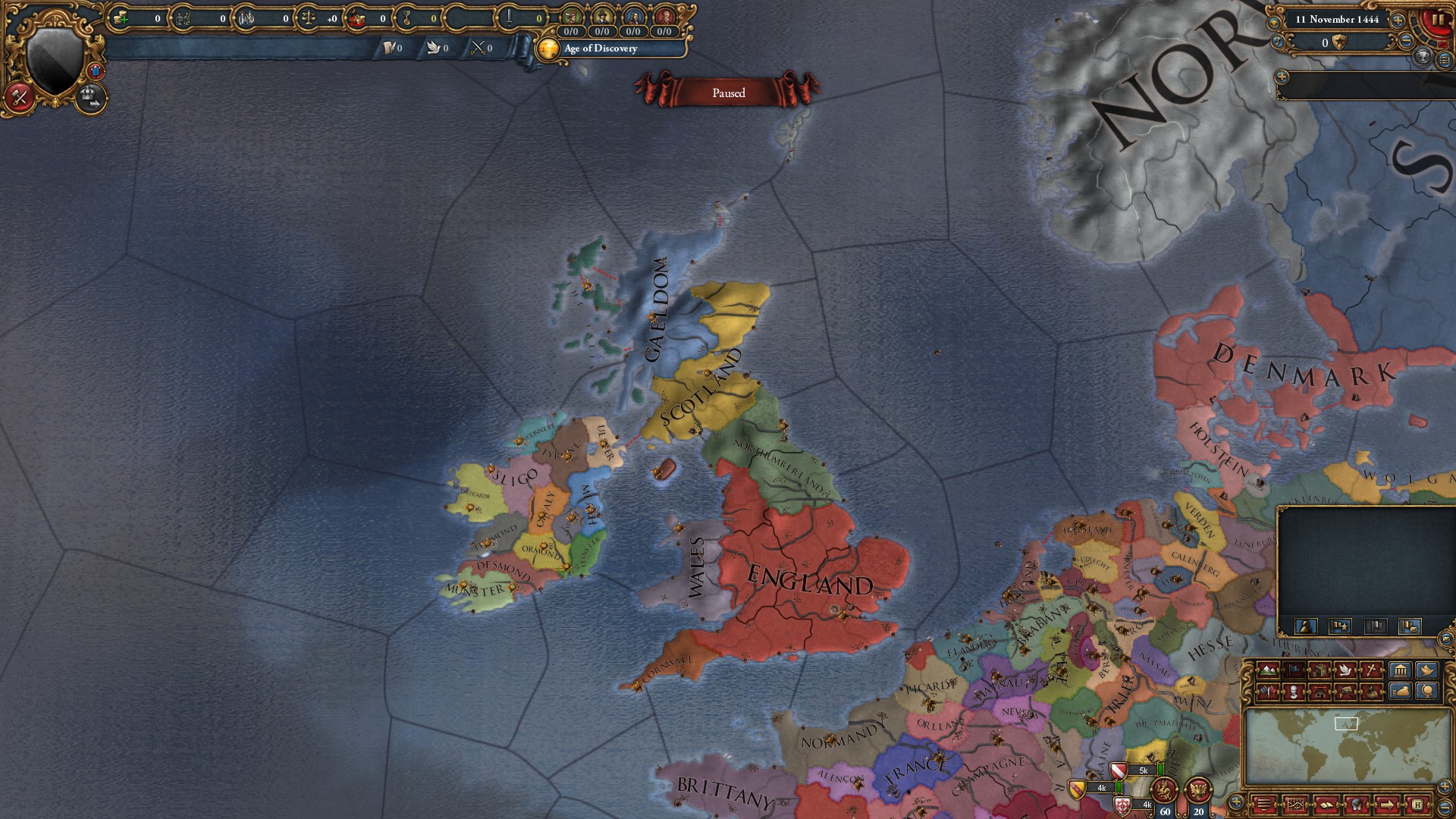 England is looking rather busted up. Honestly, I'm expecting this to just be a speedbump for the English AI. But who knows, with the War of the Roses, they might get dogpiled. 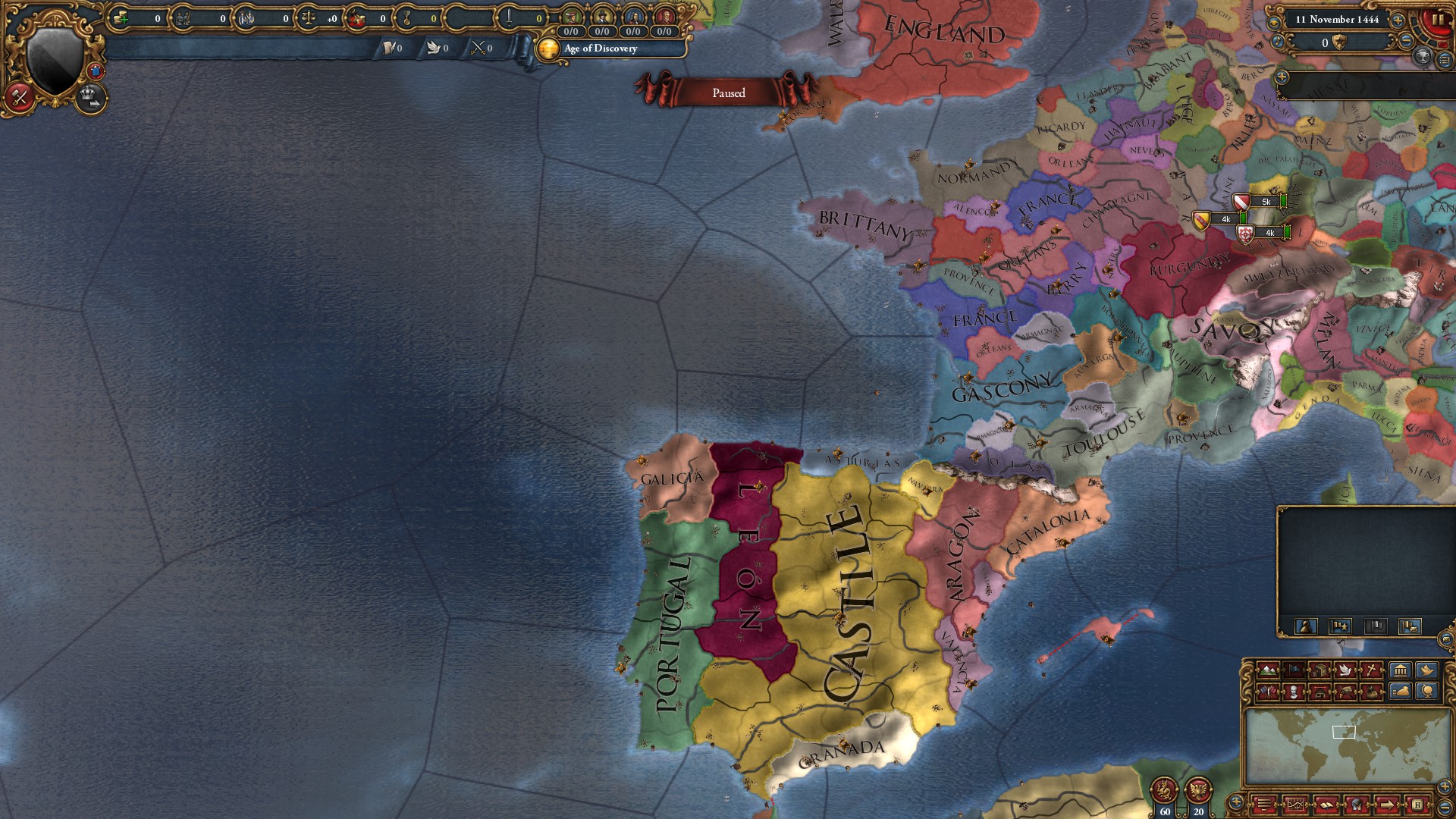 Iberia is looking a bit different, but wildly similar to England in my eyes. Castile might clean up, but at the same time, Portugal might step in and take some free real estate, or even ally some of these nations and make it interesting.

The HRE could be interesting, seeing how Austria is about the same size as Styria, Bohemia, Burgundy, and Milan. So they might be in danger. 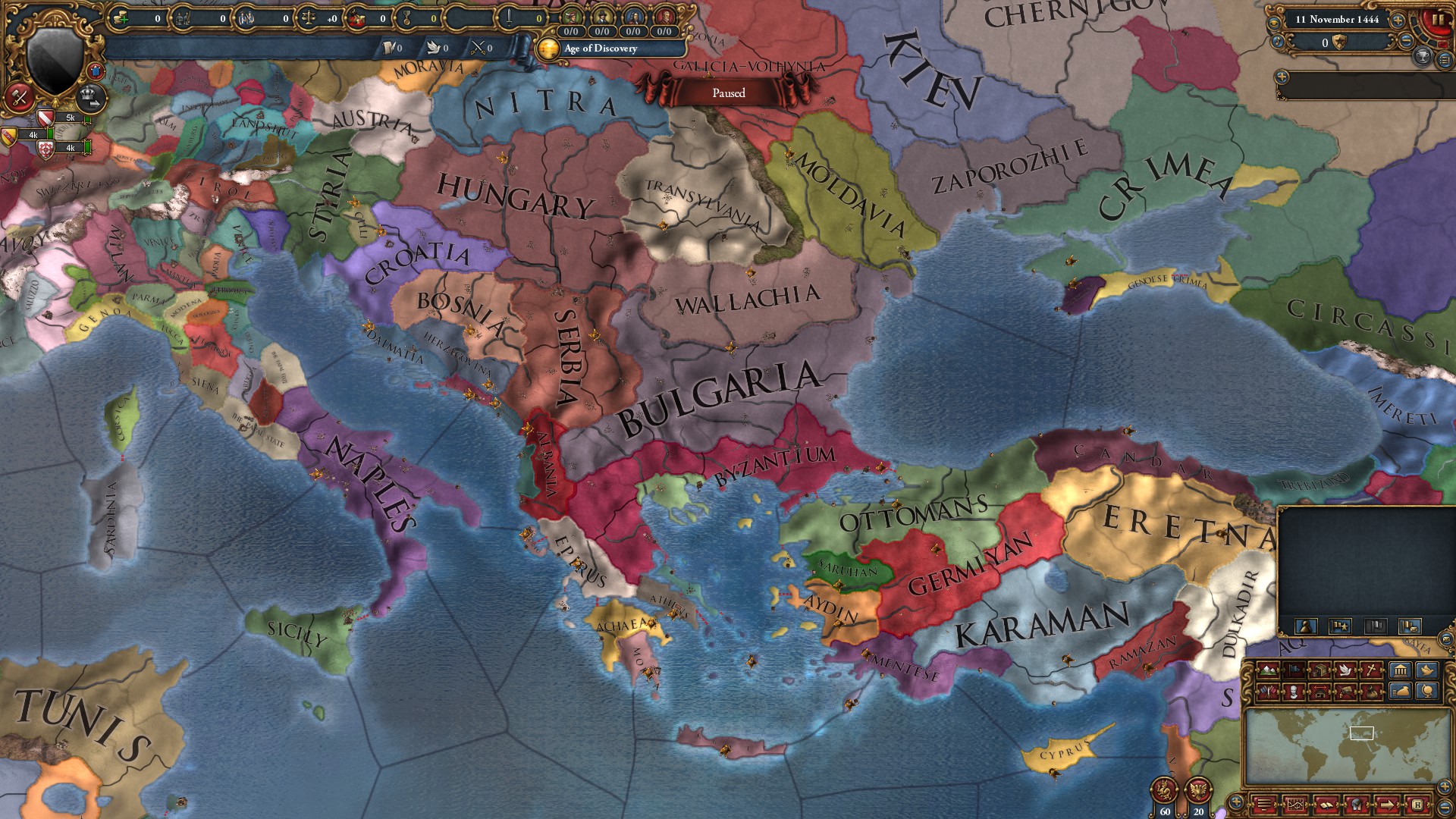 Speaking of gross, the Balkans. A big Blurple? Gross. A Balkanized Anatolia? Gross.

Italy gained a few OPMs, Sardinia, Sicily, and Venice is scattered about. 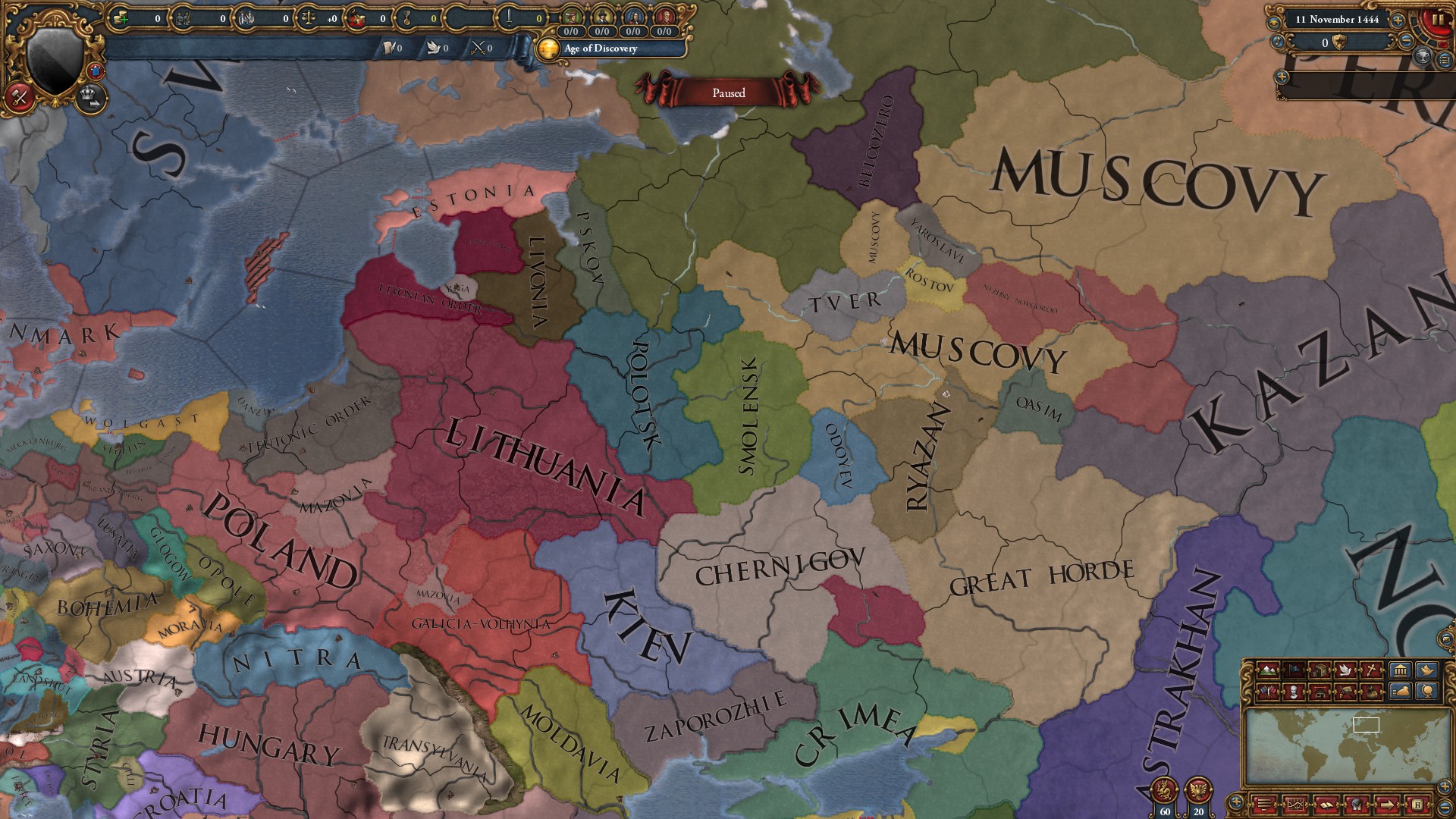 Eastern Europe is looking mighty colorful. I'm shocked to learn that Novgorod has NO foreign cores, I could have sworn they had a Sami province, but that must only happen if a rebel type fires.

I'm betting on Novgorod to win Russia, but who knows, maybe Muscovy will pull itself together! 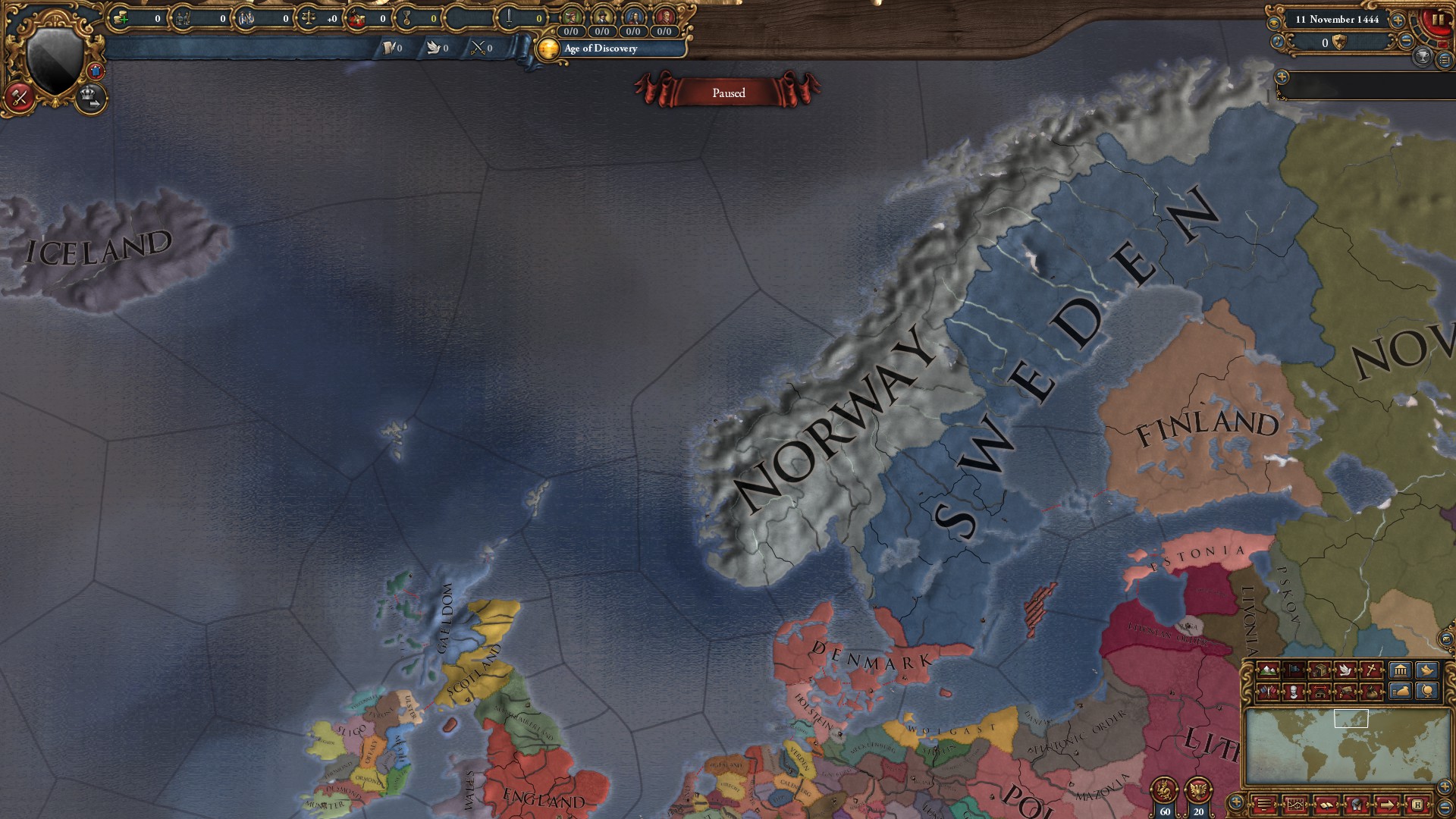 Scandanavia is also rather depressingly similar, bar the addition of Finland and Iceland.

Also, I couldn't get Gotland freed without killing rebels and taking time to do so, since you can't accept their demands. If anyone knows how I could do so, let me know. Otherwise, it's a small island nation, I don't think it would have had a big impact, like Cyrus in the Mediterranean. 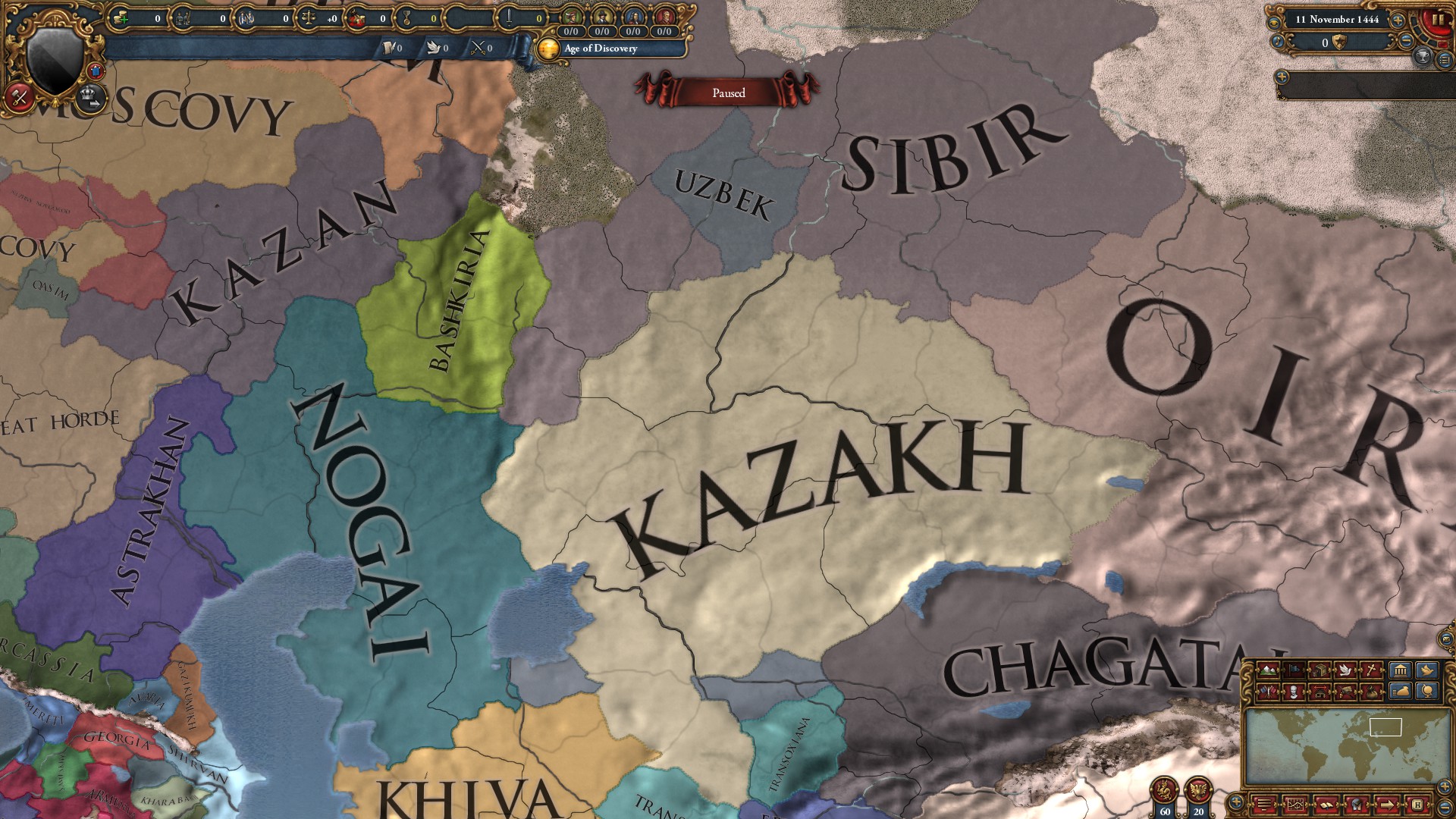 The hordes of Eurasia are looking mighty different. Sibir is wrapping itself around Uzbek. 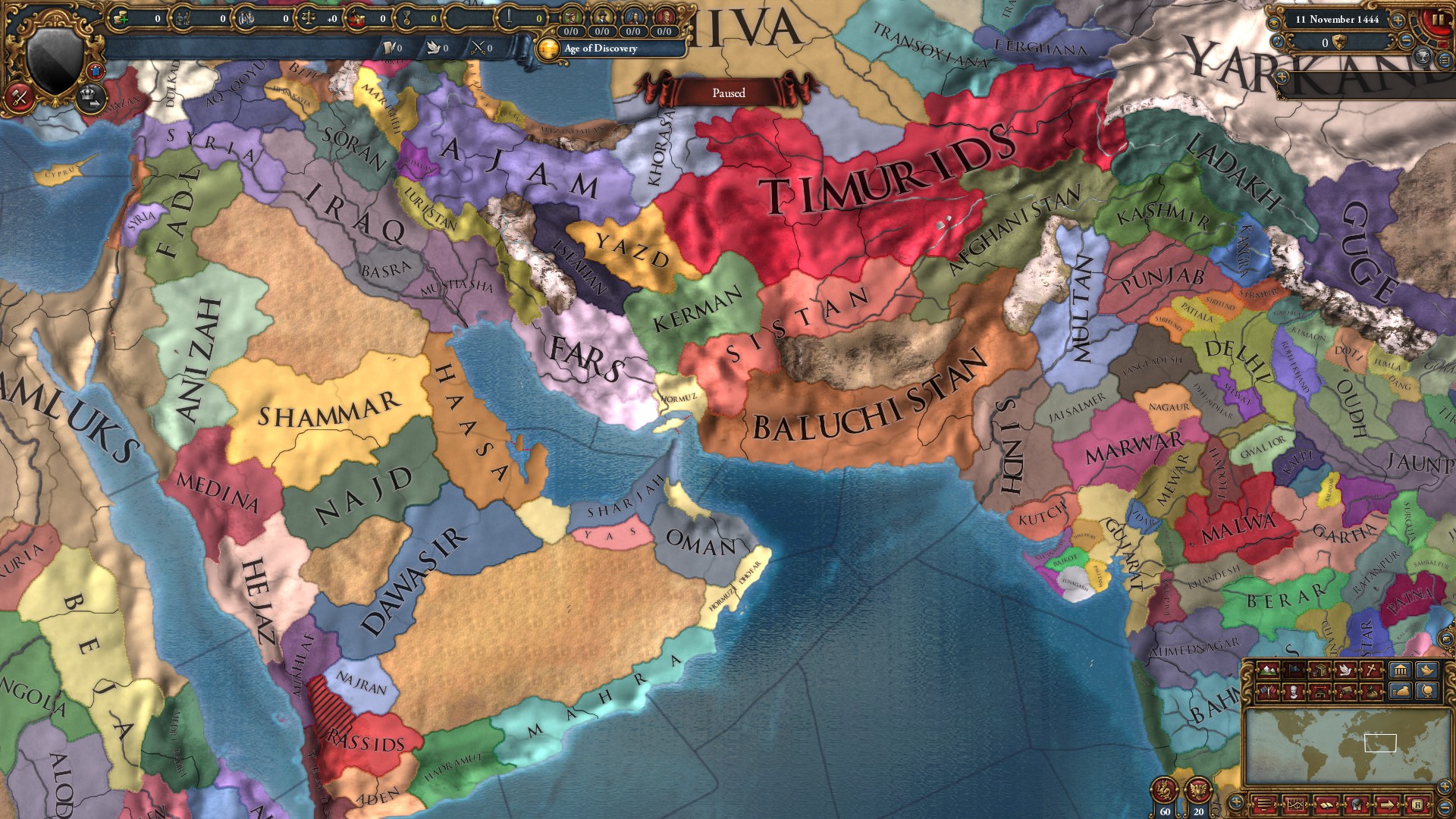 Middle east looking a lot less stable than it usually does, but that's not a high bar to get over. 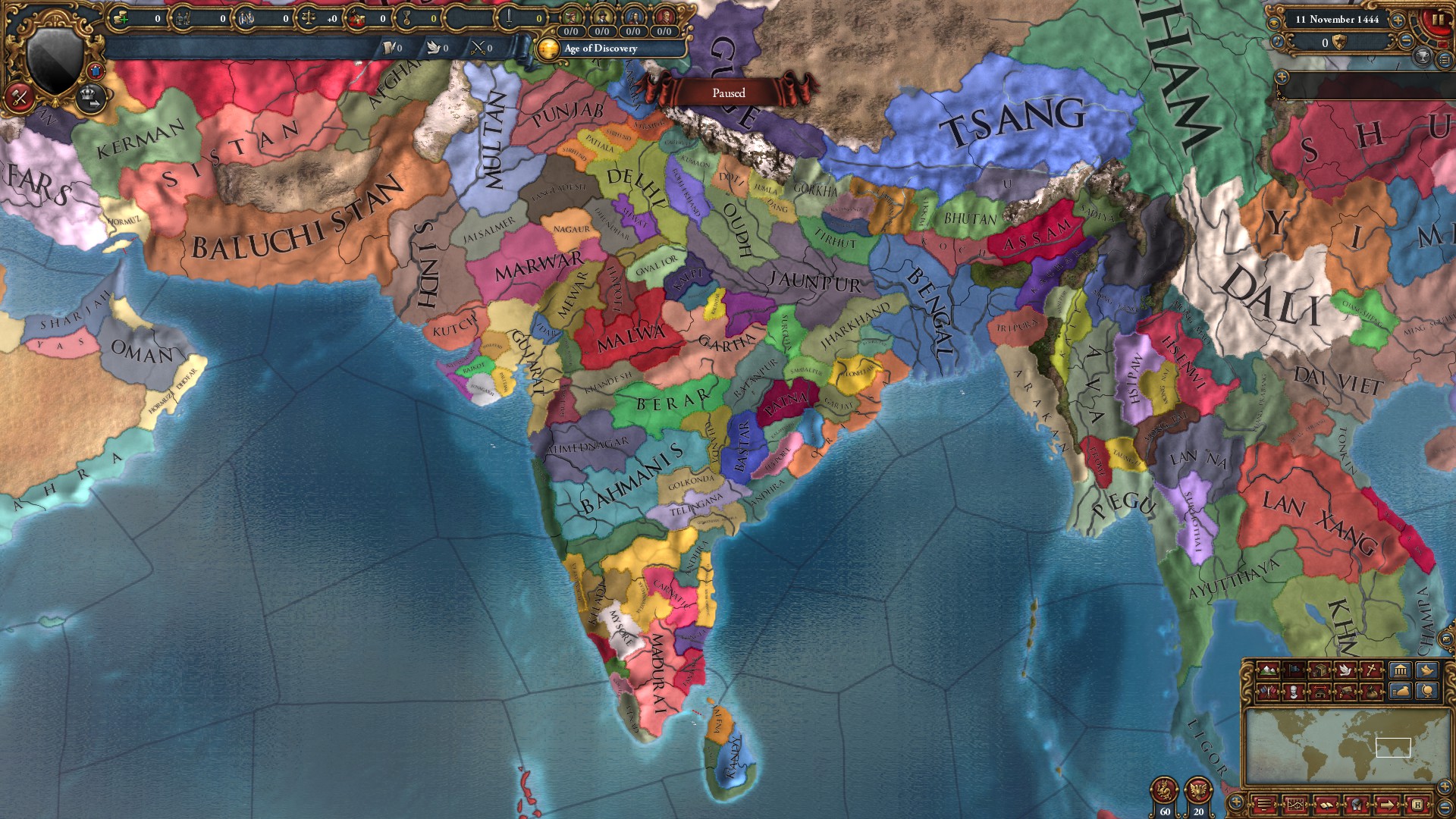 The Indian Thunderdome has lost 2 of it's biggest contenders. Bengal lost absolutely nothing, so my money is on them dominating. 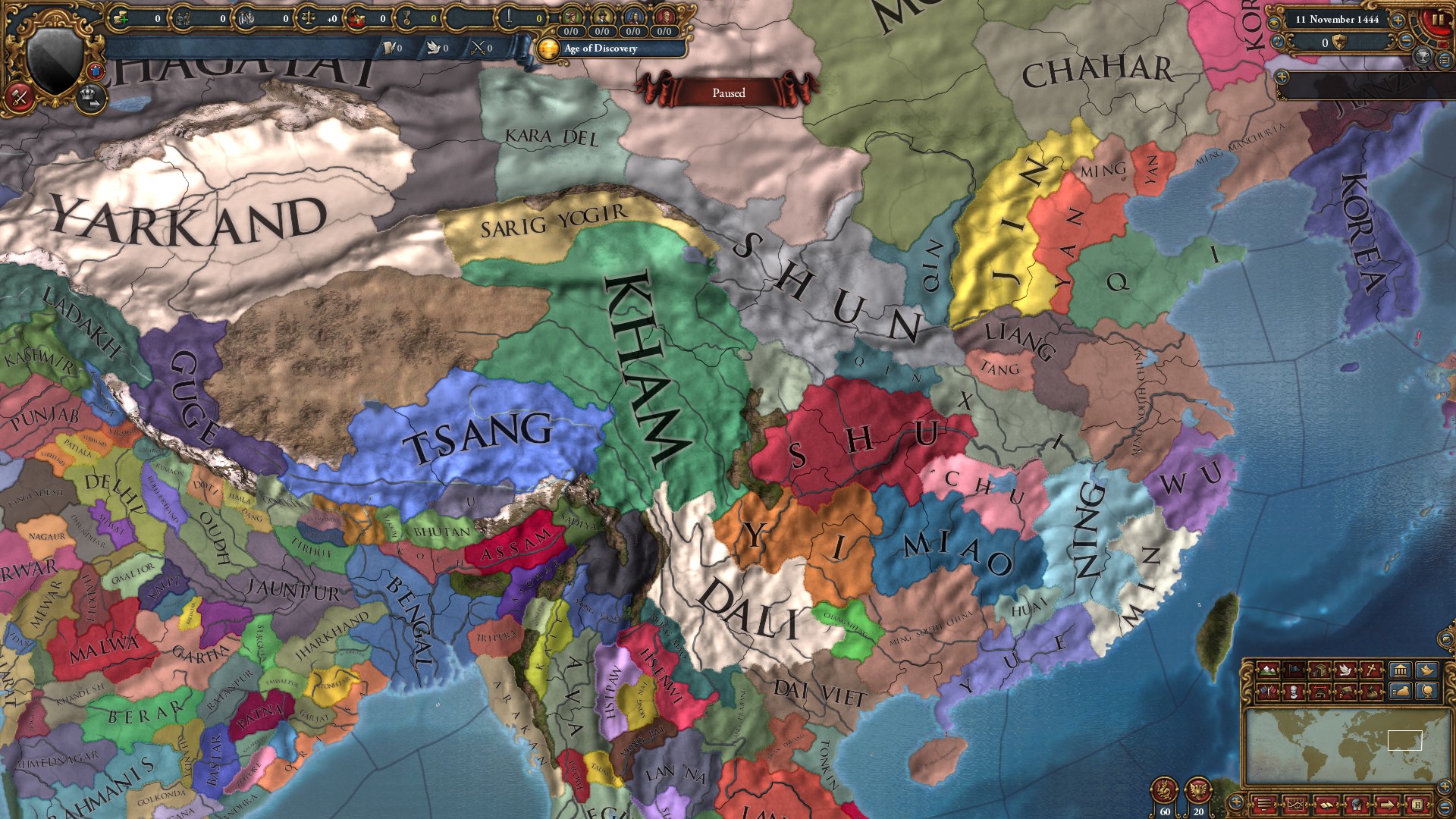 China is also looking like a disaster, let's just hope that Ming doesn't tributize everyone like they're want to do.

Ming also lost all their tributaries when I made them release their subjects. Because ANY subject is not allowed. 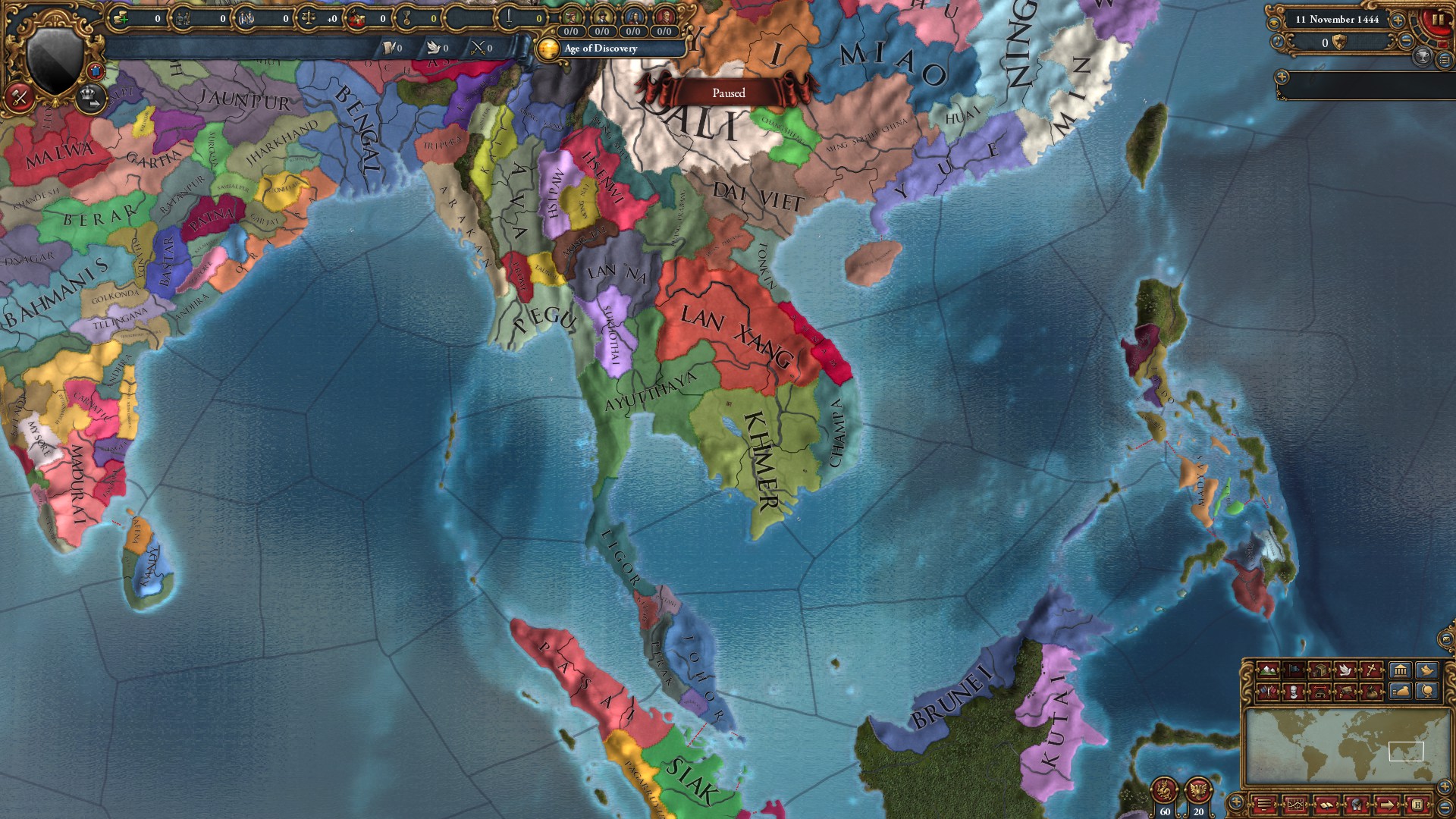 Indochina looking just a little different. I'd consider holding off until neondt's SEA update arrives, but who knows when that might be. 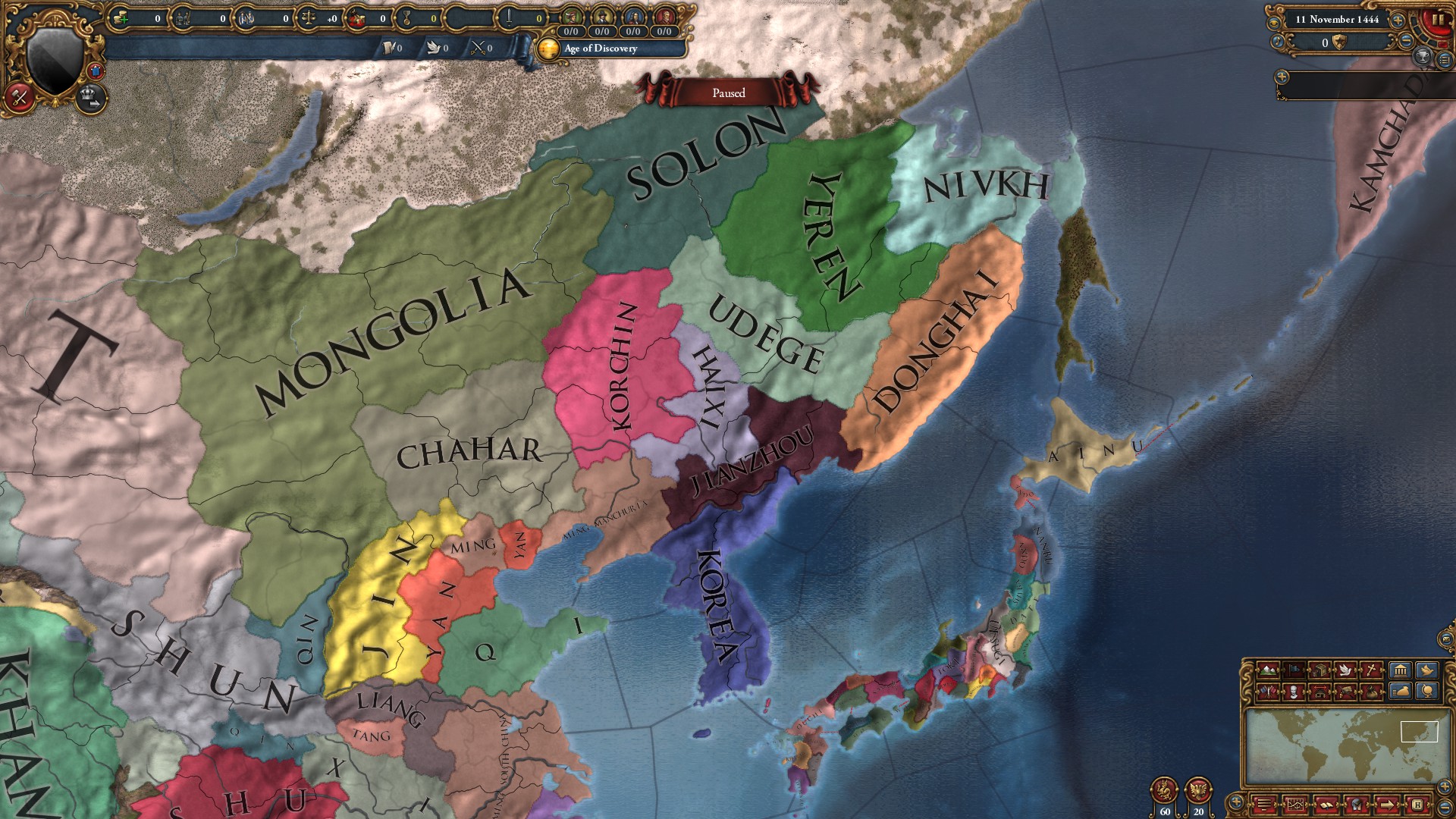 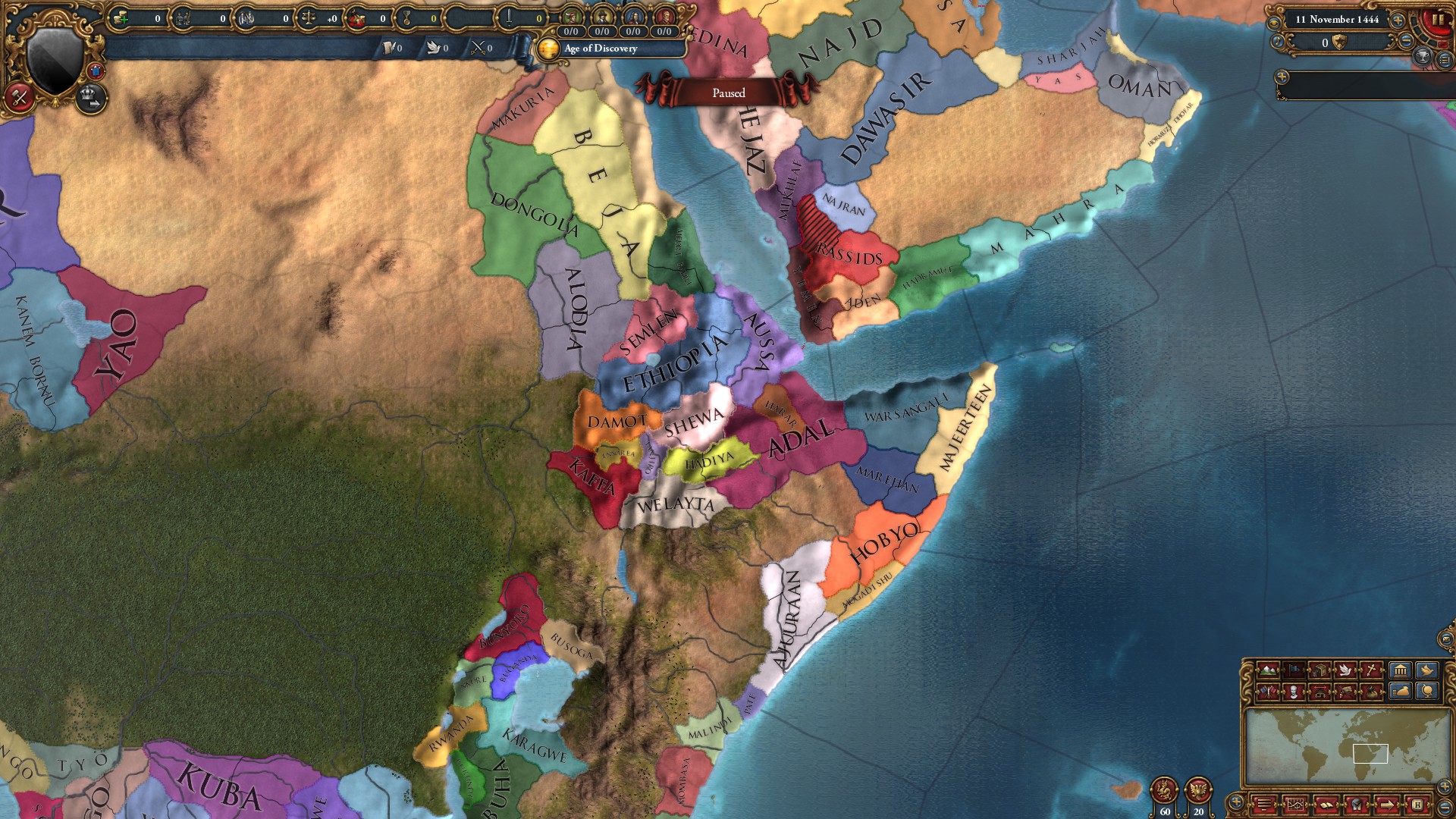 Horn of Africa looks a little more colorful, and maybe if we're lucky, Siemen will win out and form a massive Jewish superstate. 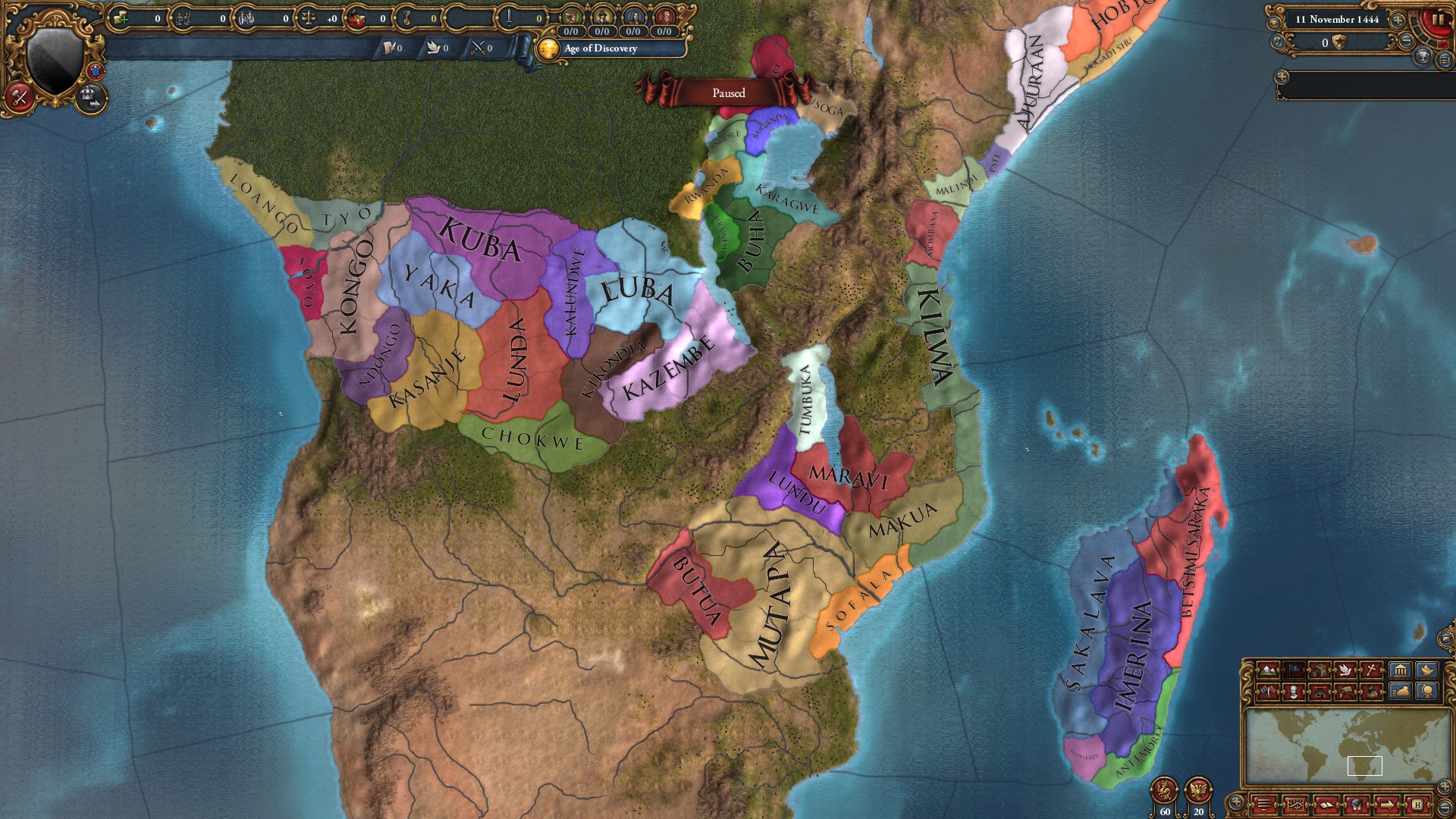 Central and southern Africa looks mostly the same, just everything is released. 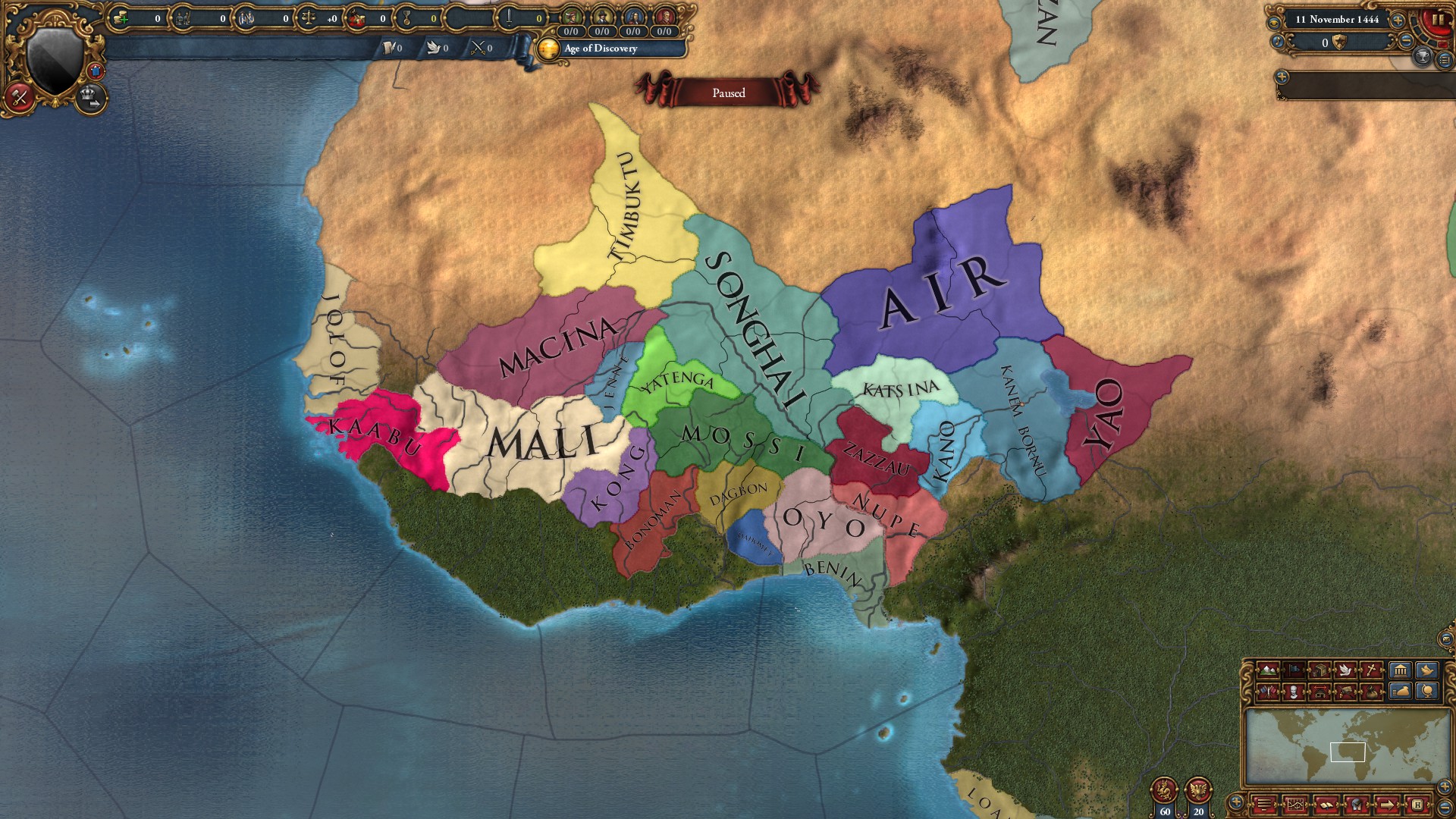 And lastly, Western Africa got a little more busted up. I'm rooting for Kaabu, personally. That neon pink color is just FABULOUS.

And that's the end of the world tour! The Americas are entirely unchanged, mostly due to how ignored they are in terms of updates, and they have no subject nation either, so nothing to release.

But, I do have a dilemma. I have no idea what region to play in, let alone the nation! As I consider this, I am definitely up for suggestions as to what region and what nation. I have a few ideas of my own, but none that I'm particularly attached to. So let me know what you think, I'm gonna think on it for a bit before getting this started!

Take Siemen, the Jewish state. Too few Jewish AARs, I say we do one here. And where is Siemen, might I ask?
Toggle signature
In the name of God and Ethiopia, we charge forth to rid our land of foreign invaders! Fight with me, countrymen! Fight with me, sons and daughters of Ethiopia!

Ebanu8 said:
Take Siemen, the Jewish state. Too few Jewish AARs, I say we do one here. And where is Siemen, might I ask?
Click to expand...

I'll keep that in mind, I'm still thinking about where to start. But Siemen does sound fun, being directly north of Ethiopia and completely isolated religiously.


Wixelt said:
"Battle Royale with Cheese" needs to be an achievement name.
Click to expand...

What would the requirements be? As the USA, own Paris and Hamburg?
Toggle signature
I'm now doing AARs! Come read them if it strikes your fancy!

Could be "Have at least 30 daimyos as the Shogunate of Japan whilst you are the production leader in livestock."
Toggle signature
Culture: English
Religion: None
Traits: Lazy, Shy, Just, Gluttonous, Lunatic, Flagellant, Irritable

I have ignored a few users here for various reasons. don't be confused if I don't respond to your replies to my posts.
I

This looks like it's going to be a lot of fun! I don't have any specific recommendation about where to play, though. Both an area where you haven't played much and an area where you play a lot could be interesting.
J

May I recommend this mod? 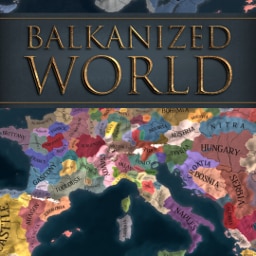 It works the same way as your game, but is updated for 1.30 and makes it look more beautiful

MachopPower69 said:
May I recommend this mod?

It works the same way as your game, but is updated for 1.30 and makes it look more beautiful
Click to expand...

I'm running a few observer mode test games, to see if there's any noticeable difference between my version and the mod version. So once that's done, I'll make a decision on which one I think is better and go from there. The Better AI mod is definitely making the world more interesting, though.

Also, I'd advise that you play as Trebizond. Lots of opportunities, and who knows? Perhaps the City of the World's Desire can be reclaimed?
Click to expand...

I'll keep them in mind, Anatolia is definitely shattered to bits right now, they could use a strong nation with a long history of ruling Europe!
Toggle signature
I'm now doing AARs! Come read them if it strikes your fancy!

Well, I've determined that I'm going to be starting as a nation in Africa, and I've narrowed it down to just a few potential countries. I'm leaning more towards one, but I'm still debating. I'll have my answer by the middle of next week, so keep your eyes peeled for the "prologue" of this relaxing run!
Toggle signature
I'm now doing AARs! Come read them if it strikes your fancy!

I'd have suggested playing as OPM Malacca or Madauri, but go ahead with whatever you want.
Toggle signature
Culture: English
Religion: None
Traits: Lazy, Shy, Just, Gluttonous, Lunatic, Flagellant, Irritable

I have ignored a few users here for various reasons. don't be confused if I don't respond to your replies to my posts.

Wixelt said:
I'd have suggested playing as OPM Malacca or Madauri, but go ahead with whatever you want.
Click to expand...

I figured it best to avoid India and SEA, given how SEA's the area of focus for the next update. Especially since I do have an idea for a run in the area, but I want to have a nice, relaxing game first. Good suggestions, though!
Toggle signature
I'm now doing AARs! Come read them if it strikes your fancy!

Still all for Semien, really. Though, if I might make a suggestion, try going for national ideals that promote colonialism, innovation, and progression. That way, we stay ahead of most others.
Toggle signature
In the name of God and Ethiopia, we charge forth to rid our land of foreign invaders! Fight with me, countrymen! Fight with me, sons and daughters of Ethiopia!

Super cool idea for a start looking forward to following this one!

Alright, it's time to announce the country we will be following in this AAR! I've given it a lot of thought, and I had come down to 3 nations, but was then able to bring it down to 2 nearly immediately.

The last place country was... Imereti! I was considering playing in Madagascar, but I shot that down almost immediately after remembering what the situation would be fore me. Not many routes to expand, colonization would be slow due to being on a remote island, it would just be boring at best, annoying at worst.

2nd place was... Siemen! And only JUST BARELY 2nd place. I actually have an idea for later in the area, but it's not nearly as relaxed as I want for this AAR, so I'm putting the horn of Africa on the back burner for now.

Which means that, our nation we're playing as is.... 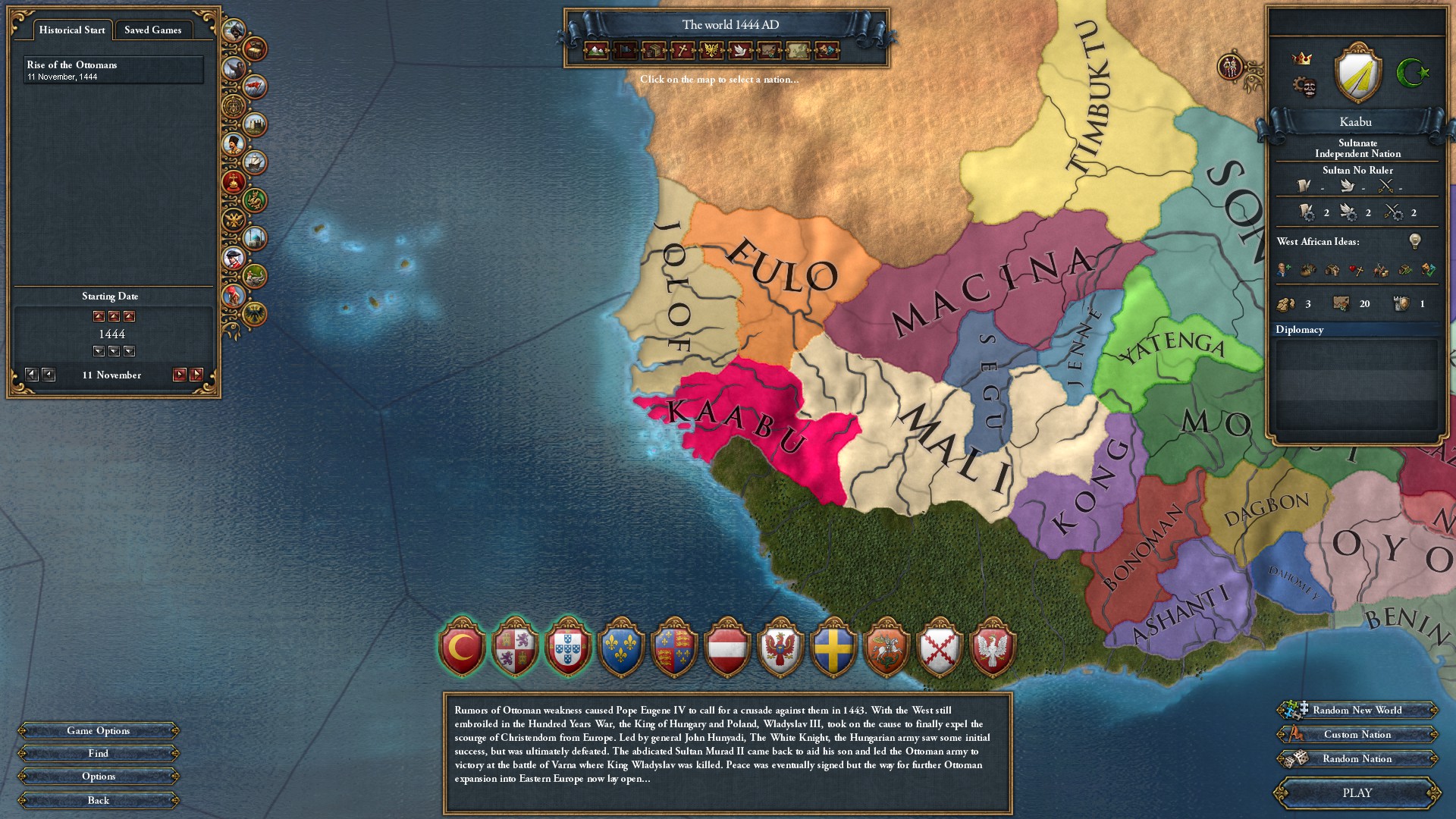 Look, I'm a sucker for that neon pink color, and it's in a prime location for many routes to expand (colonization, annexation, and vassalization), so it won't be boring, that's for sure! Especially since I'm gonna be trying to play a "pseudo-tall" game. I say pseudo-tall because I don't know if you would call "owning west Africa" tall or not. And I say "trying" because I am historically bad at playing tall. Expansionist blood flows in my veins, the call of "moar clay" echoes in my soul.

But, I'm also hoping that, with this location, I'll be able to intervene in European affairs with ease, and see just how messed up we can help make the map!

For now, I'm gonna get the party started pretty soon, but not JUST yet. I wanna finish the quick run I was doing to see how 1.30 plays, get used to all the changes and such before getting started. So I'm hoping to start by the weekend, or early next week!

I hope you enjoy this run, and hopefully I'll see you in the first official part!
Toggle signature
I'm now doing AARs! Come read them if it strikes your fancy!

Well, not everyone plays an African nation, but I'll see this through. Need any help on writing culture?
Toggle signature
In the name of God and Ethiopia, we charge forth to rid our land of foreign invaders! Fight with me, countrymen! Fight with me, sons and daughters of Ethiopia!

Africa should be interesting...

"The road to hell is paved with good intentions."
Tempus et mort vincent omnia - Time and death conquer all
M