Seriously, what's up with the Influence chance always being 0?

Menu
Install the app
You are using an out of date browser. It may not display this or other websites correctly.
You should upgrade or use an alternative browser.
A

I like almost all changes DH has made over the years. But one thing I don't understand is the neutered diplomacy.
What I've somewhat managed to understand is that possibly IC and Belligerernce has an impact and playing on Very Hard often makes influencing someone harder.

But even on normal, looking through in most of my saves right now at various points in history, with various nations, it's 0. I'm guessing the biggest impact is whether or not you're at war and it's very difficult for even the UK to influence democratic nations once it has even a bit of conquered lands it seems?

1:st Question/Suggestion:
Could you please fix this or at least explain the factors that influence it so we can work around it?

2:nd
One thing I just tested was with the moneycheat and accept all. I'm Mexico, I've taken my interventionism to the max and Im social democratic. But instead of influencing people in these directions, which would be the important factors, I'm influencing them in the Hawk/Dove lobby - EVERY TIME. I.e. I've tried 20 nations now and never goten anything else.

Is this a factor of me using the cheat accept all or have you removed the ability to influence anything else any of the important sliders of other nations?

edit: Testing half the planet I managed to move the irrelevant Closed/Open society slider once or twice as well but never anything else.

Main factor is the resistance field in the AI file. Like Canada's can_1936.ai has; resistance = { GER = 2 JAP = 1 ITA = 1 }. Think every point is -10% influence chance.
Influencing another nations sliders should be a random factor depending on policy_effects.csv. Democratic/Authoritarian and Left/Right were never allowed and DH Full further restricts which sliders can be influenced.
Last edited: Feb 1, 2020
A

I seem to remember being able to push nations but maybe that\s from Hearts of Iron 3 and the pyramid model. Either way not even having Interventionism vs Isolationism means you can't push countries to ally you. The coup mechanic was always too costly so there's really very little to do diplomatically anymore, not that I care too much since it creates more consistent games but it\s a bit of a bummer. Especially when influencing seems to stop working nearly completely on both VH in general and on normal when at war.
A

Here's an example. I'd love for a dev to at least explain what's going on here.

I have a minister with +10% influence rating. I'm fascist, he's paternal so pretty close already. I already have 10% chance to get him into my alliance so it doesn't seem to be hardcoded against me as Italy influencing him as Bulgaria.

But it's not possible, despite current rating being 150% (Starting rating).
Playing on VH/Very Aggressive.

What here has the biggest impact? 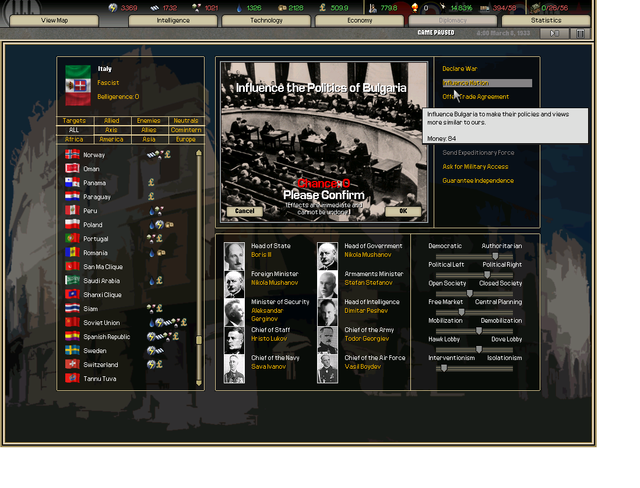 VH difficulties -50% influence. Playing on VH is playing on very non-functional.
A

Really? That explains it, I always thought it was just the function of IC/Power ratio between countries. But it's a negative 50% flat?

Well it makes for a tougher game since you can't just influence the whole world and do nonsense but it's still a bit too much I think.
M