This is my first time playing as Romania in HoIV so I thought Id post my journey here. This particular campaign is going to be a historical campaign with me doing the Preserve Greater Romania and joining the Axis powers. This first part is going to be me giving a general overview of the Romanian situation at the start of 1936 and covering the first year of relative inactivity.

Part 1: Preparing for the Future 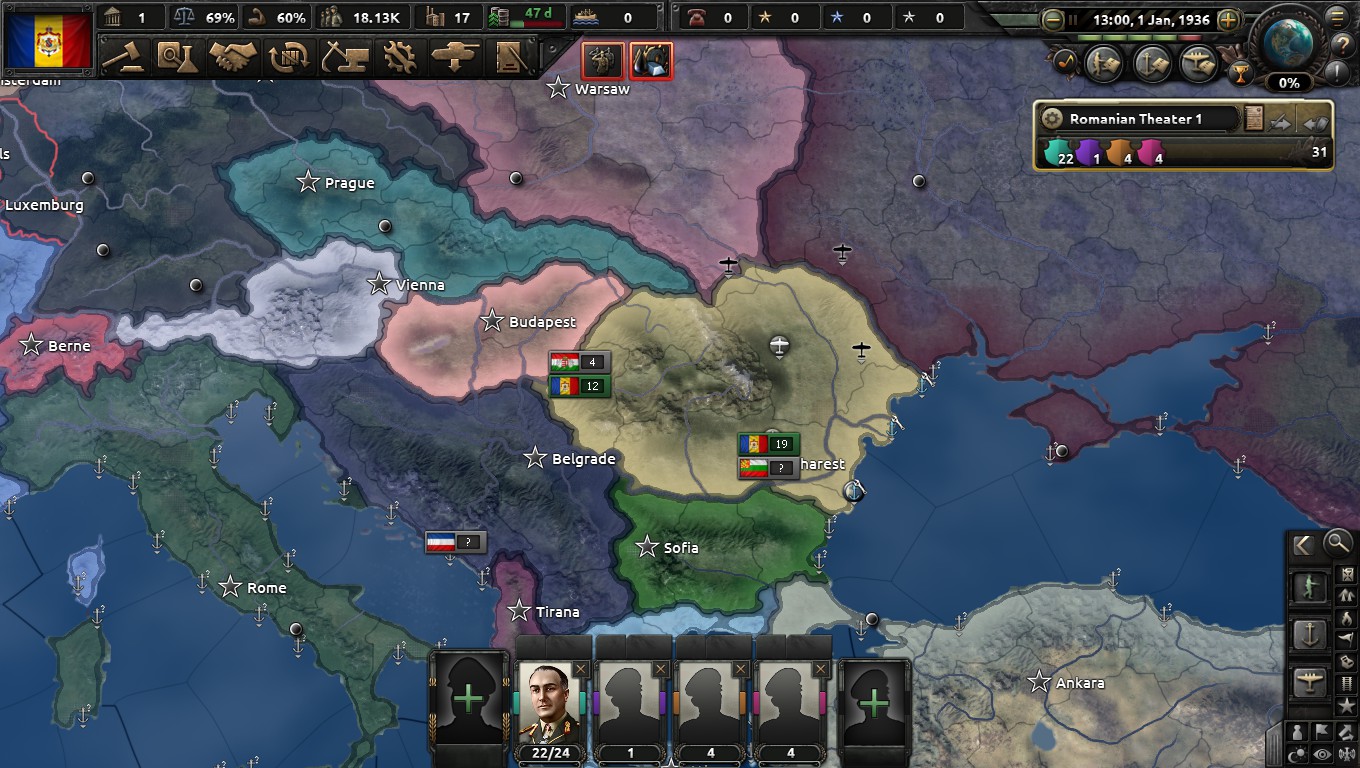 Looking at Romania in the 1936 start date will reveal a country with great potential that is marred by a few major issues that will need to be resolved if we wish to reach our full potential. First lets look at our Industrial position. We start off with a grand total of 11 Civilian and 7 Military factories-a decent industrial backbone to be sure but not terrific especially since many of the civilian factories will not be usable for construction due to consumer goods and resource trading. Of these we will lose 2 Civilian and 1 Military factory when Hungary demands the Translyvania region-cutting us down to 9 Civilian and 6 Military factories. We will lose a further 2 Civilian factories to the Bulgarians when they gain Dobrudja which cuts us down to 7 Civilian factories. The loss of these factories will be quite painful as we will need many of them to import the resources we will need to fuel our armanents industry. Speaking of fuel lets take a look at the Romanian resource situation. We produce a grand total of 70 Oil in our capital state of Muntenia-the largest oil field in western Europe which can be used to produce more fuel or traded away for civilian factories. After that however Romania has almost 0 resources. We have a meagre production of 4 steel that will be lost when Hungary demands Translyvania and theres 6 Aluminum in Banat-everything else will need to be imported from other nations at the expense of our already limited civilian factories.

Romanian Armed Forces
Whilst im fairly happy with the state of the armed forces in 1936 I did do some minor changes. We have 22 divisions of good quality infantry that consist of 9 brigades of infantry Support Artillery and Engineers. In the future I will be replacing 2 of the infantry brigades with Artillery brigades and add a 3rd artillery brigade as well. We have 1 Armored Division of a mediocre quality consisting of 2 Light Tank and 2 Motorized Division. I kept it but im going to wait for Medium tanks to bother trying to update the template. 4 Divisons of Cavalry consisting of 3 Cavalry brigades each. I disbanded these so I could use their infantry equipment and manpower to reinforce my infantry divisions. And 4 units of Mountain infantry consisting of 6 mountaineer brigades which I couldn't decide if I should disband or keep so I kept them around for now. The Navy is in a pitiful state with 4 Destroyers of which 2 are minelayers and 2 are ASW-I don't plan on expanding the Romanian Navy but kept these ships in case I do in the future. The Airforce is also in a pitiful state with 24 IAR 12 and 48 PZL 11 fighters. Im going to focus mainly on getting the Army expanded with infantry divisions and more support equipment but I also would like to get a tank division or two for the eventual war with the comintern. The Air Force will receive a small amount of effort but I will be mostly relying on the Luftwaffe. The Navy will not be expanded at all except for some convoys.

Technology
Standard setup here. Will be focusing on Engineering techs and Industrial techs first followed by Infantry equipment, Artillery, Support Equipment and Armor. Always like to leave one slot focusing on land doctrine as well. 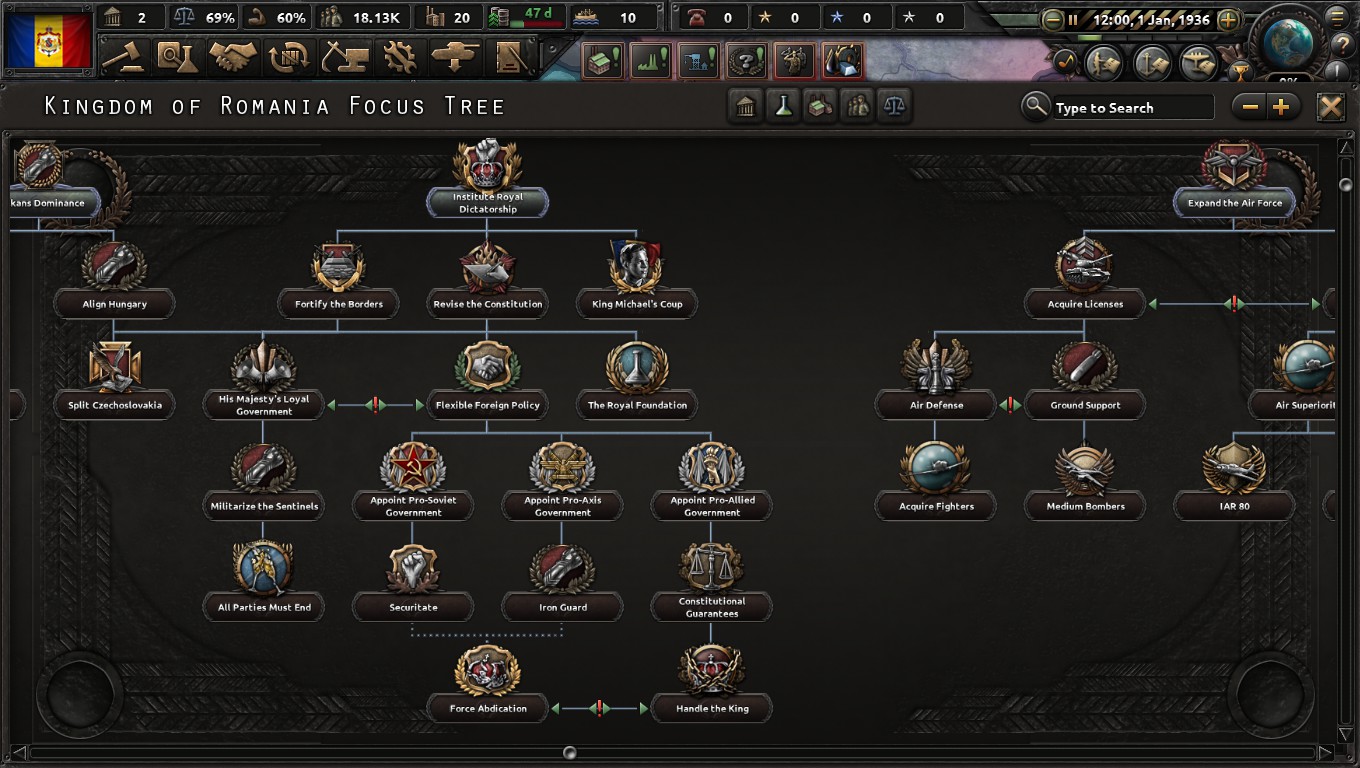 King Carol II's lifestyle is a major issue for any Romanian campaign and is the first thing im going to get rid of. To accomplish this I chose to go down the Institute Royal Dictatorship branch first so I could head down the Pro-Axis path of the branch. Along the way I stopped and picked up the extra research slot available in the Royal Foundation. By Janurary 1st I finished the Appoint Pro Axis government focus and will be picking a facist demogague as my next advisor to get more facist idealogly drift. Because im doing historical the next thing I Will be doing after this is the preserve Greater Romania branch and then headed down the industrial branch so I can work on getting my Industry up and running followed by going down the trade deal with Germany subbranch and joining the Axis.


Due to a massive need for more infantry equipment I didn't have a chance to train any new divisions as all the infantry equipment produced has gone to reinforcing the starting divisons-and a failure on my part to get the army training so I can get swap some of the infantry for artillery. By the 1st of January Romania has a deficit of 7000 Infantry equipment and 234 support equipment but has a very small stockpile of Light Tanks and Artillery. Im not a big fan of Light Tank divisions so I might just keep the 1 line of Light Tank production and add Armored Recon to my infantry templates. I have no factories assigned to aircraft so the Air Force is still the same size as it was a year ago although eventually I do want some Fighter Aircraft at least.

In terms of government I have switched to partial mobilization to lower the amount of consumer goods factories I need and have hired the following advisors:
Nickolae Malaxa-Captain of the industry for faster civilian factory construction, Ion Antonescu-Amry Offense Expert for better divison attack and I only need 20 more political power so I can hire a facist demogague and start going fascist which will be my next purchase.

Construction: Unfortunetly the factory I started building in 1936 still has 400 odd days to build and so my factory count remains unchanged. 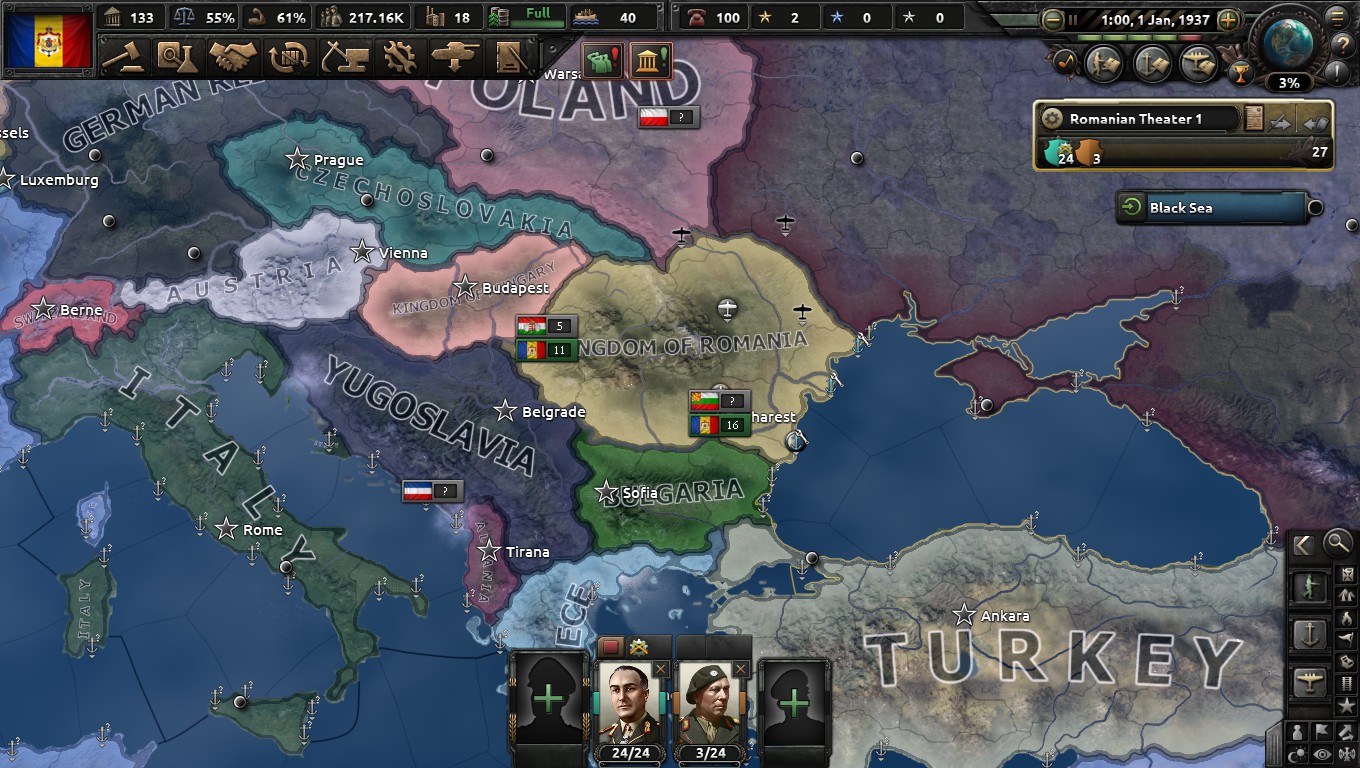 And that's it! In 1938 I hope to flip to Fascist and start working on getting the army reinforced and expanded with some more infantry divisions and support equipment


That's the end of the first part of my Romania AAR. Please let me know what you think, any(non game cheesing) tips you may have and let me know whether you think I should focus more on getting an armored divison out or continuing my infantry focus.
Reactions:

Will try to follow
Expand signature
To view is human, to comment is divine.
"Be not afraid" - John Paul II
"The Christian way has not been tried and found wanting, it has been found to be hard and left untried" - GK Chesterton.
Current AAR: The Thorn of the Rose HoI4 The Future of the Red Lion Stellaris (on hold) Journal of the Silver Daggers Battletech
Completed AAR: In Memory of France EU2 Pax Humanitas Stellaris 1.4.1 A VictoriAARn Education Victoria II 3.2
The Great Trial Stellaris 1.9.1A Game for Lisan: Belgium EU4 1.25 Account of RCAF Bomber Command HoI4
Other AAR: Entering the First Court - Kanem Bornu EU4 1.22
View my full AAR list at The Inkwell Red Special Cookie ●
This line is necessary since the forum re-work to enable the links in the last line to be used.

Well, well, well, I was just thinking of Romania in HOI4. For some reason, a better detailed and intricate nation than Italy, despite being doomed by every neighbours national focus tree. You're in for a pretty harsh game if you decide to play ball with the the Axis, unless Germany backs you over all your Axis neighbours.
Expand signature
CKIII AAR: 'Ged's Existential Nightmare' : Prepare for the rapture with this handy tutorial!
CKII AAR: 'Lancaster: The King in the North' : A minor family become a powerful House...hopefully.
CKII AAR: 'The Empire of Albion' : Professor Monmouth gifts us with a biased intro to British history.
CKII AAR: 'The Little Dux' : A dwarf child has to rise to become the greatest doge Venice has ever seen.