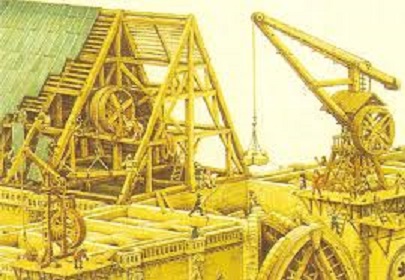 More Public Projects​
This chapter opened in the middle of March, of the year 921 AD, with the Basileus riding back to the Capital on his Elephant along with the rest of the Hunting Party. Along the way he kept getting messenger hawks. Unlike the owls and bats they stayed awake during the day and were less likely to be attacked by other birds like the pigeons. The first hawk brought the news that the Exarchessa Eupraxia of Bengal was calling forth her own levies.

It was likely she planned to deal withe Raiders herself. As her military easily outnumbered the invaders it was only a question of time before she crushed them. Then the Basileus received another hawk with some news that was only a day old. This hawk had taken a more scenic flight. It seemed the Doux of Qamdo had his Council pass the Ruler War Declaration Sovereignty Law. Which made him all the more powerful. Then a hawk, with the message tied to its right leg with a black ribbon, brought mixed news. Seems the eldest son of Doux Bhavesh of the Banfala Varman Duchy had taken over his fathers Titles and Estates. The 53 year old had died, it seemed, from Cancer. Of course there was the nonsense of a Non-Aggression Pact being disbanded because the old Doux had died. Well, DUH! But there was some good news. When the old Doux died he took a Faction with him. Which meant there was only one Faction left within the Empire. Of course it was a movement to bring Gavelkind Succession in the Kingdom of Bihar. A peek at a report on Plots, brought to him by a very judgmental hawk, showed there was only two still functioning. Even his own plot had disbanded, without him noticing, because the cheating jerk had died!

“He escaped!” grumbled the Basileus as the hawk looked around his Elephant platform and seemed disgusted by the mixture of purple pillows with green drapes.

Also it looked like the Bastard son the lecher had produced had died. The Emperor had mixed feelings about that. Sure the boy had been a bastard but he had been a bastard of the Dynasty. The Basileus never EVER blamed the children for the actions of their parents. 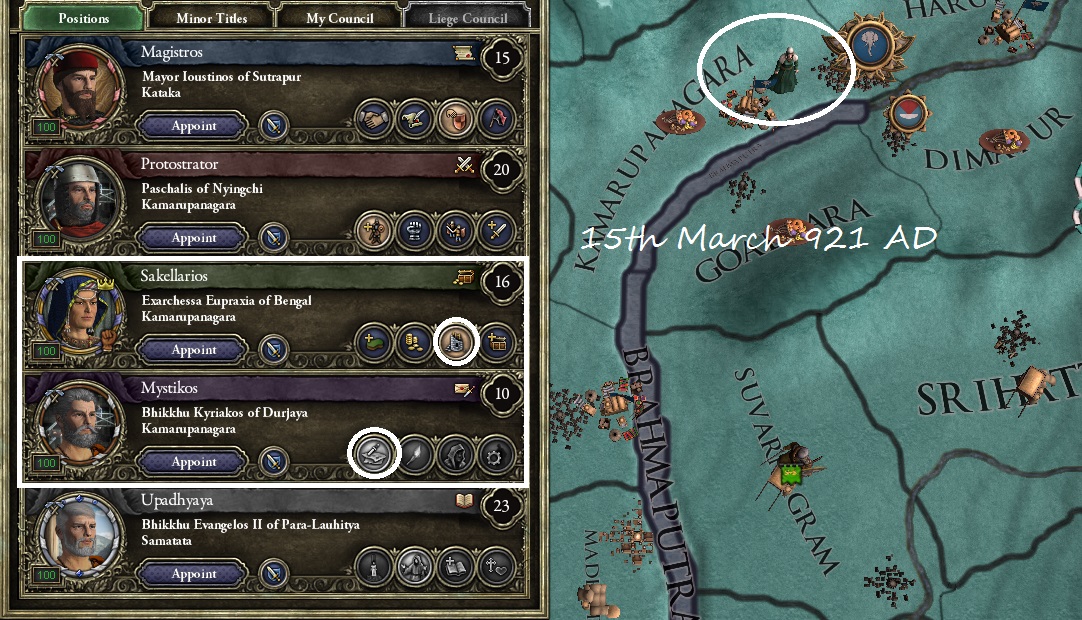 “May as well call back our Spymaster and have him work inside the Imperial Court,” remarked the Basileus. And so the Spymaster was called back to the Capital.

He also noticed his eldest daughter, who was also his Sakellarios, had run out of projects to oversee. Not wishing her, and her idle hands, to get into trouble - Or somebody else’s bed - he ordered two building projects to be carried out. 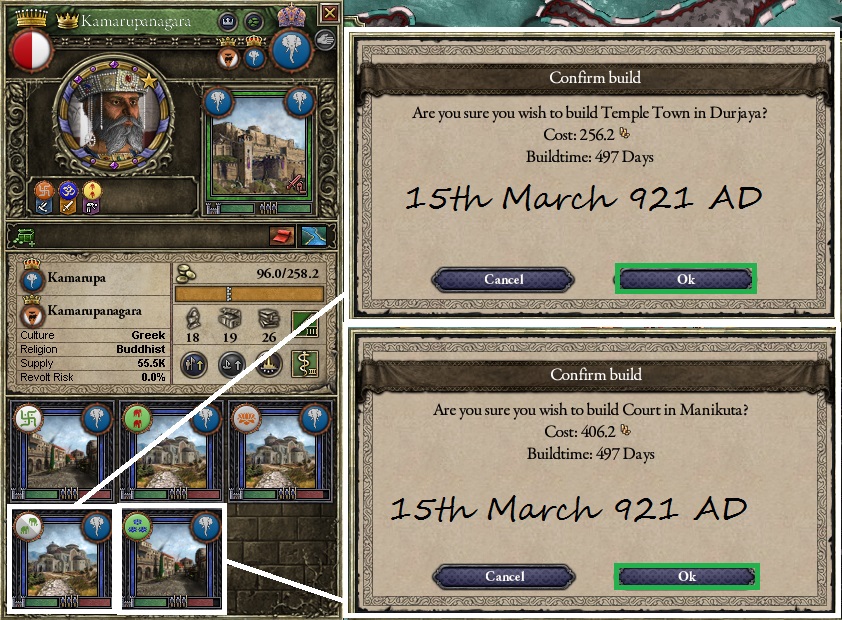 One project was to expand on the Temple Town in the Temple Complex of Durjaya and the other was to build a Court in Manikuta. This would help end disputes and allow trade to continue to flow as smoothly as possible. Which would generate more taxes.

Both of these projects were in the Capital and could be overseen by the Sakellarios. Then a hawk came with a report about the Raiders. It seems they had grown bored of laying siege to walls they could not overcome and had decided to go after troops being assembled by the Lords of the Ghosha Raj. Seems the local Commanders had no idea what they were doing. Maybe they had assumed just running about would scare the Bandits off. One of the small Armies was about to find out the hard way that such tactics don’t work. Buddha was on the side with the larger armies. The Hunting Party finally arrived in the Capital Province by late March. There was cheering crowds in the streets. Bringing back another tiger rug was looked at as a very good sign.

Not to mention the hawks can prey on the messenger birds of other rulers - avian communication interdiction!
Expand signature
To view is human, to comment is divine.
"Be not afraid" - John Paul II
"The Christian way has not been tried and found wanting, it has been found to be hard and left untried" - GK Chesterton.
Current AAR: The Thorn of the Rose HoI4 The Future of the Red Lion Stellaris (on hold) Journal of the Silver Daggers Battletech
Completed AAR: In Memory of France EU2 Pax Humanitas Stellaris 1.4.1 A VictoriAARn Education Victoria II 3.2
The Great Trial Stellaris 1.9.1A Game for Lisan: Belgium EU4 1.25 Account of RCAF Bomber Command HoI4
Other AAR: Entering the First Court - Kanem Bornu EU4 1.22
View my full AAR list at The Inkwell Red Special Cookie ●
This line is necessary since the forum re-work to enable the links in the last line to be used.
Reactions:
Show hidden low quality content
You must log in or register to reply here.
Share:
Facebook Twitter Reddit Pinterest Tumblr WhatsApp Email Link
Top Bottom