wzhang29 said:
I just ponder at the question if you use the yesmen console command... That seems like a lot of things to satisfy
Click to expand...

I never use that command unless I want to seriously mess around. It simply screws up too much stuff to be of any use.

Hopefully Weilan will see what a waste of money moon landings tend to be.

HIMDogson said:
Hopefully Weilan will see what a waste of money moon landings tend to be.
Click to expand...

HIMDogson said:
No, I meant in real life, since prestige doesn't matter much in real life.
Click to expand...

HIMDogson said:
No, I meant in real life, since prestige doesn't matter much in real life.
Click to expand...

So you're living in a reality where the moon landings didn't help contribute to things like microchips, memory-foam beds, house insulation and TV? Even if directly there weren't many benefits, tons of things happened because we needed ways of coping with space.
Expand signature
Victorious warriors win first and then go to war, while defeated warriors go to war first and then seek to win.
Sun Tzu
Reactions:

zenphoenix said:
Then how are moon missions a waste of money in real life? They provide valuable scientific information. If you said that they were just very expensive I would have been fine with that. But a waste of money?
Click to expand...

But all that research could be delegated to a probe, which could find out just as much but not require food. I meant sending a human to the moon. I didn't mean to start a debate.


niallmcfc said:
So you're living in a reality where the moon landings didn't help contribute to things like microchips, memory-foam beds, house insulation and TV? Even if directly there weren't many benefits, tons of things happened because we needed ways of coping with space.
Click to expand...

I hadn't considered that.

HIMDogson said:
I didn't mean to start a debate.
Click to expand...

Chapter 29: The Last War Between the States

Soon after the resolution of the Cherokee Wars and the destruction of the last major Syndicalist nation, the Confederacy launched an invasion of the People's Council to reclaim Missouri. They had unfortunately underestimated the People's Council's military capabilities, and soon the Council's troops had marched deep into the South, with Richmond's garrison the only thing between the Council and total victory. 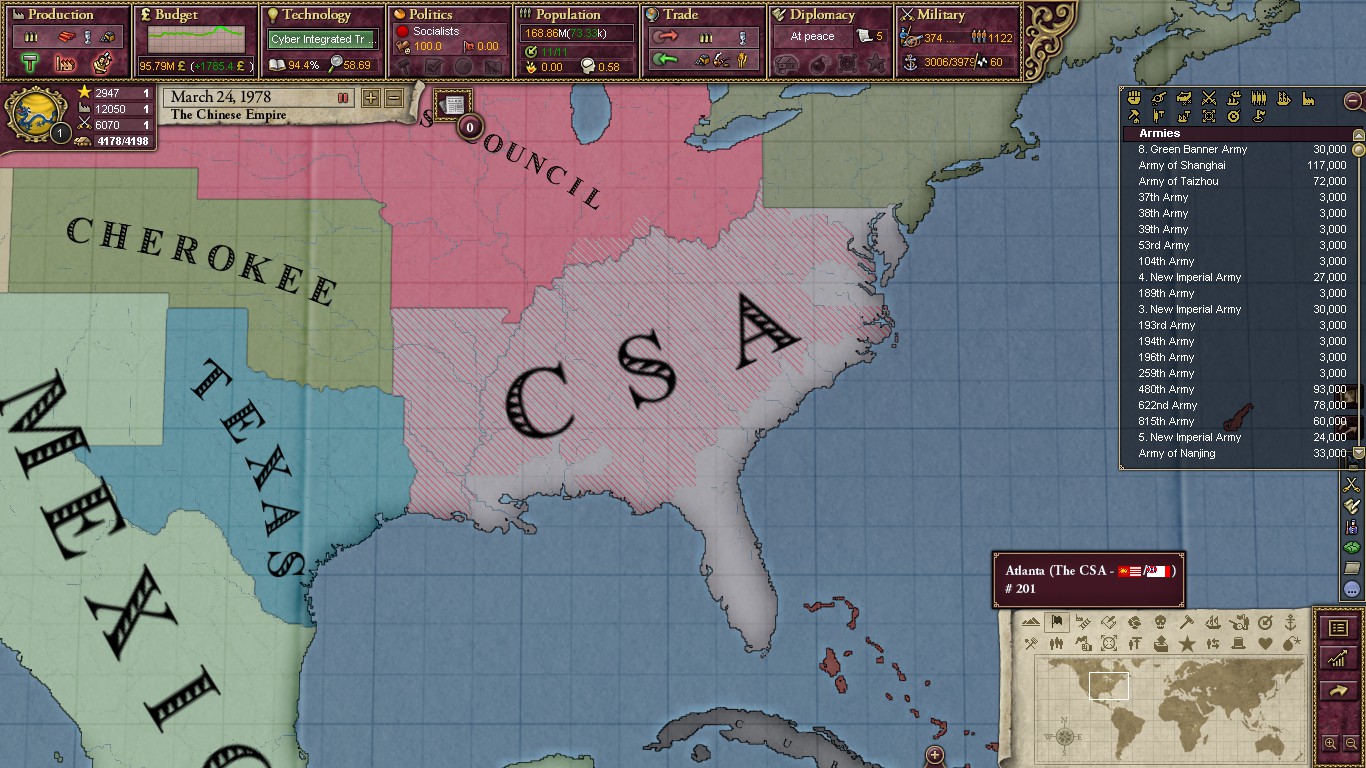 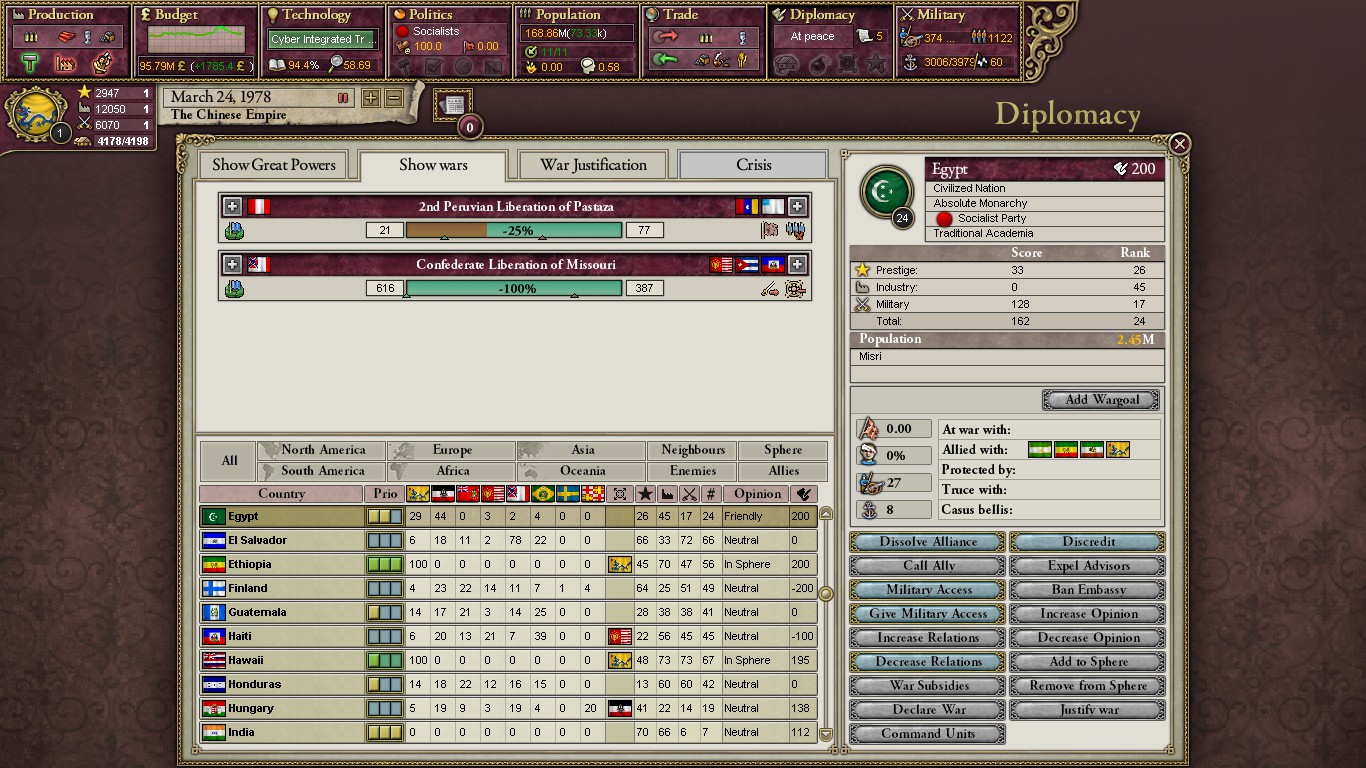 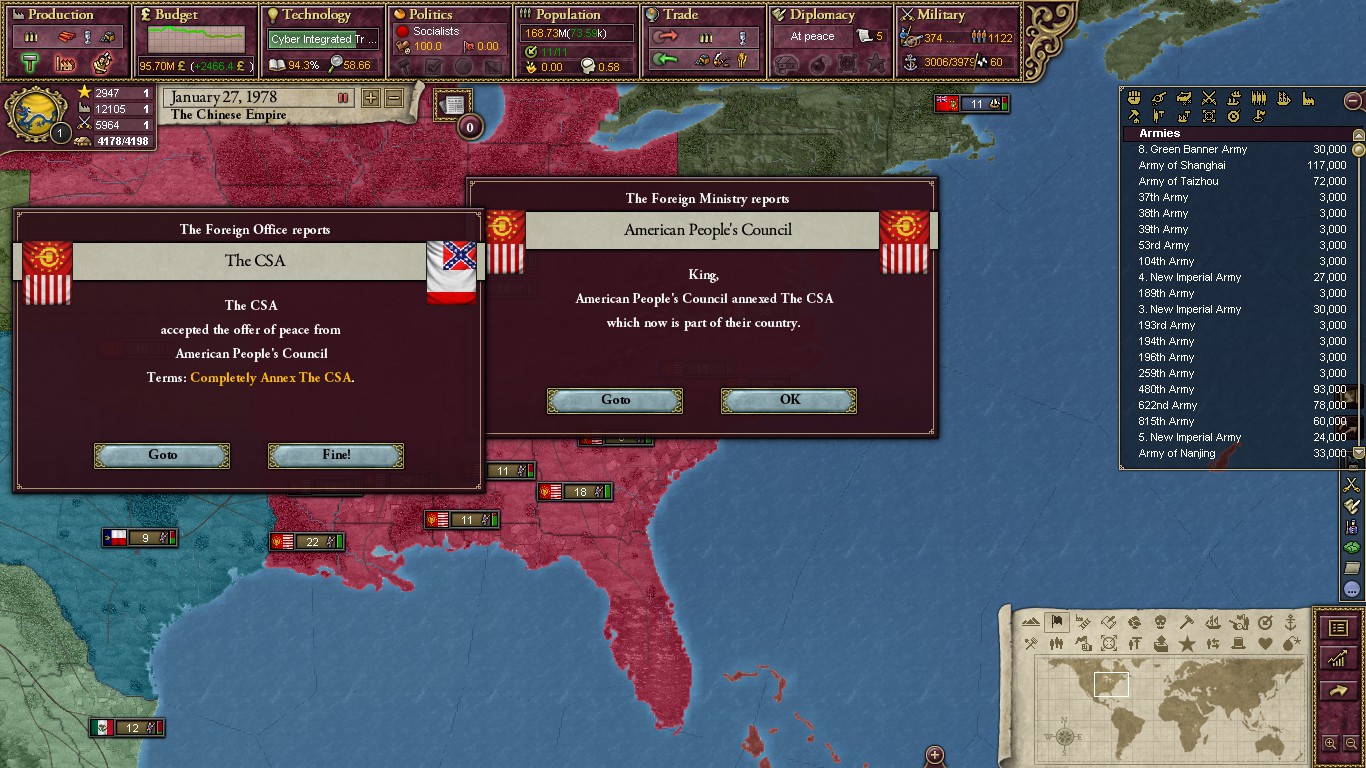 On January 27, 1978, Richmond fell, and the Confederate government surrendered. The United States of America was reestablished later that day. 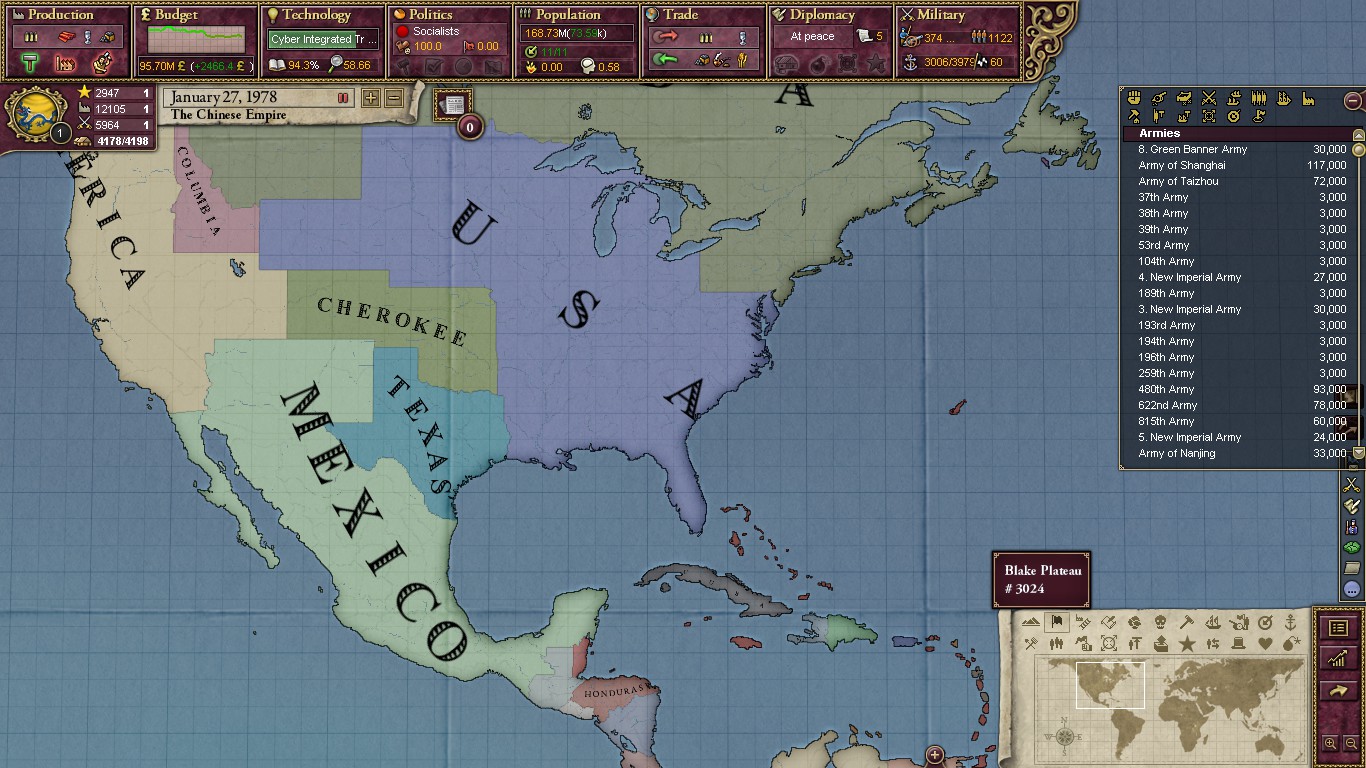 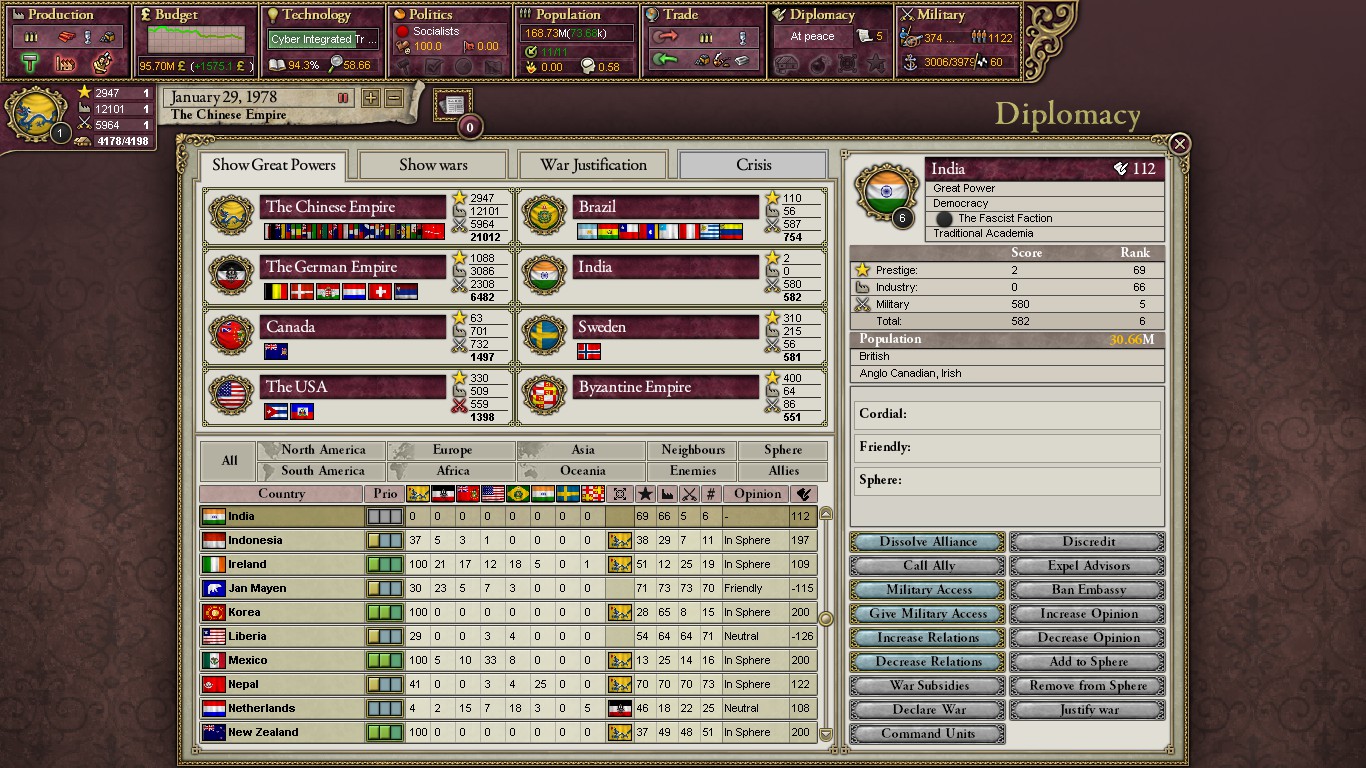 For the second time, India broke free from the Imperial tributary network and became internationally recognized as a "Great Power." 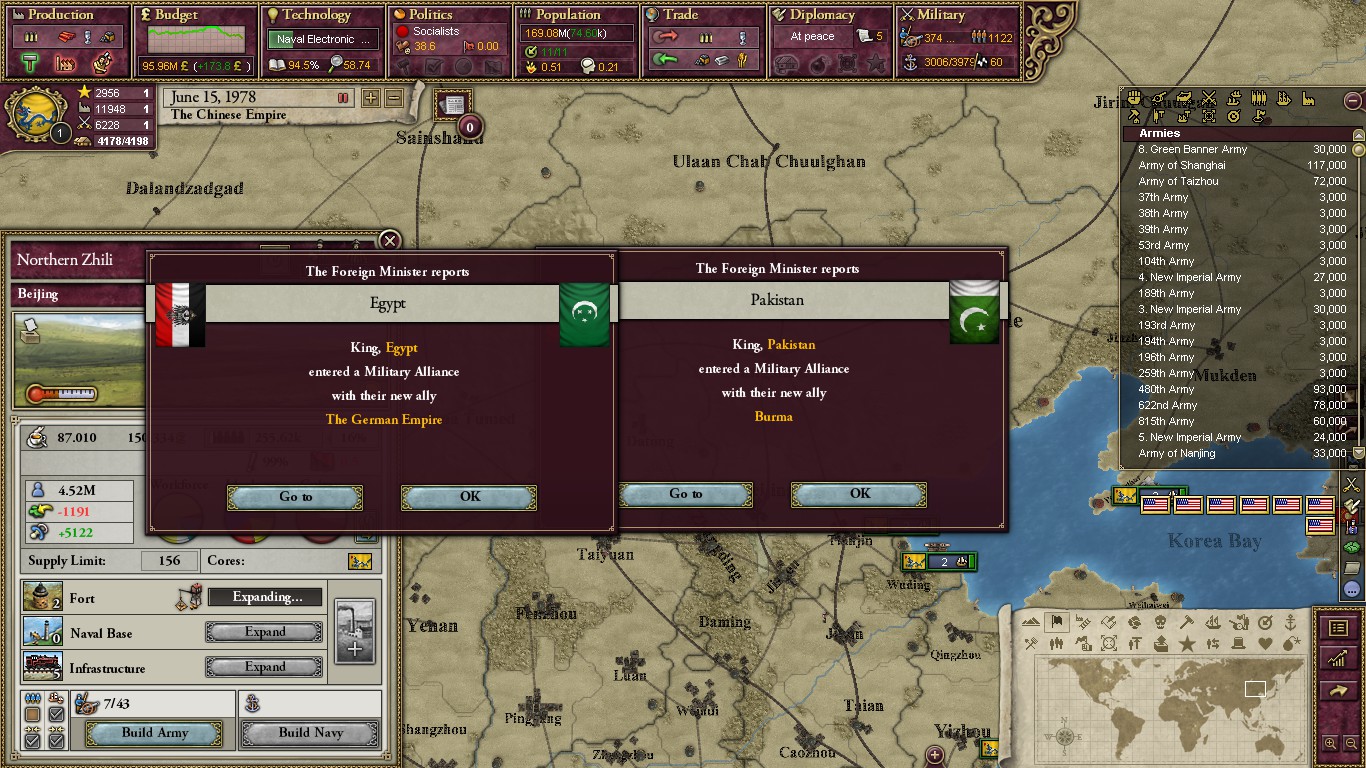 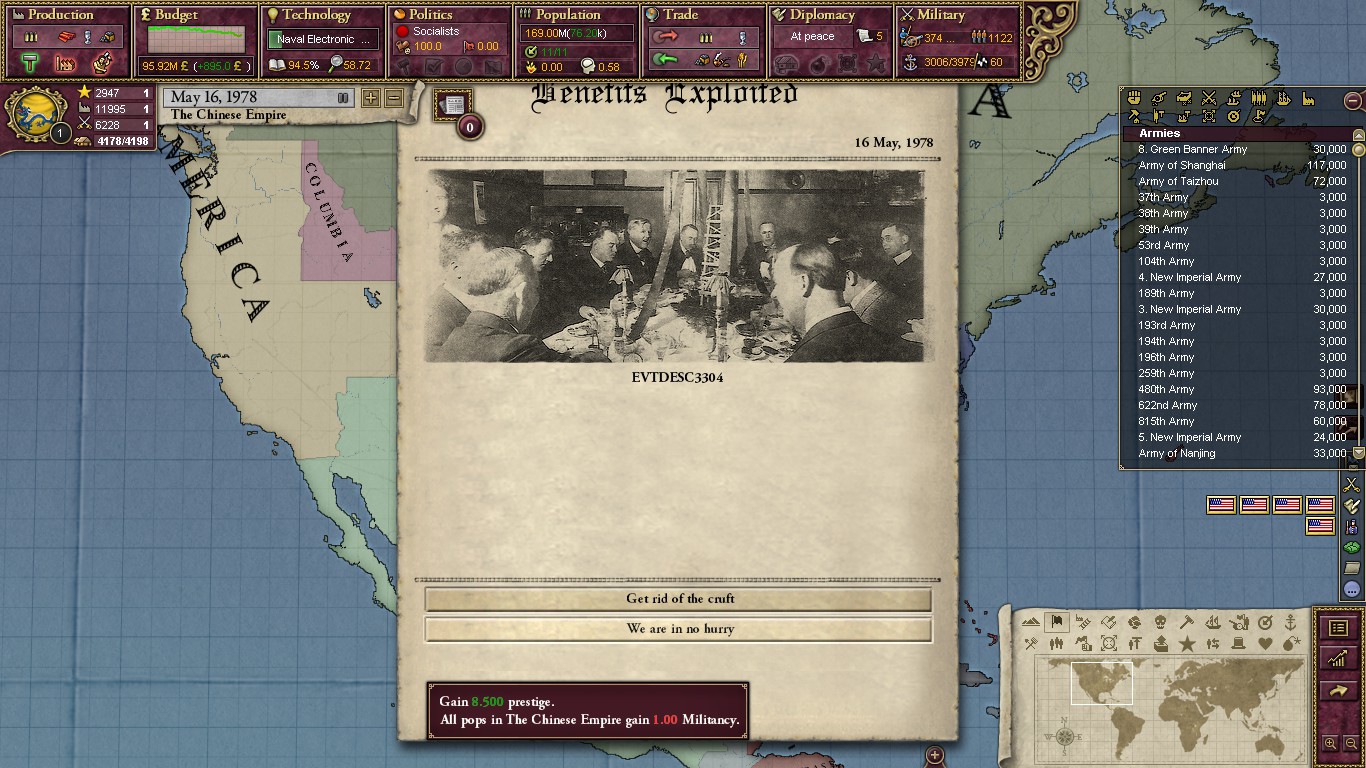 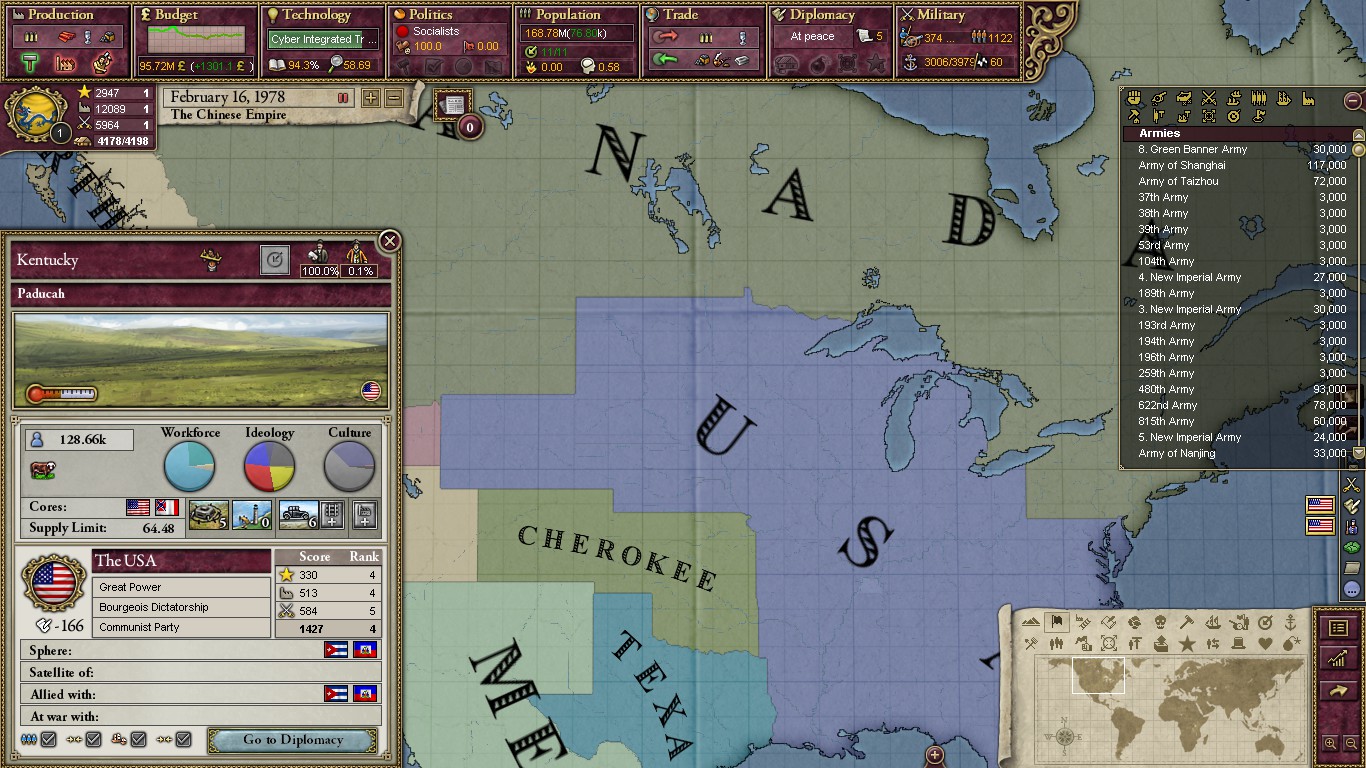 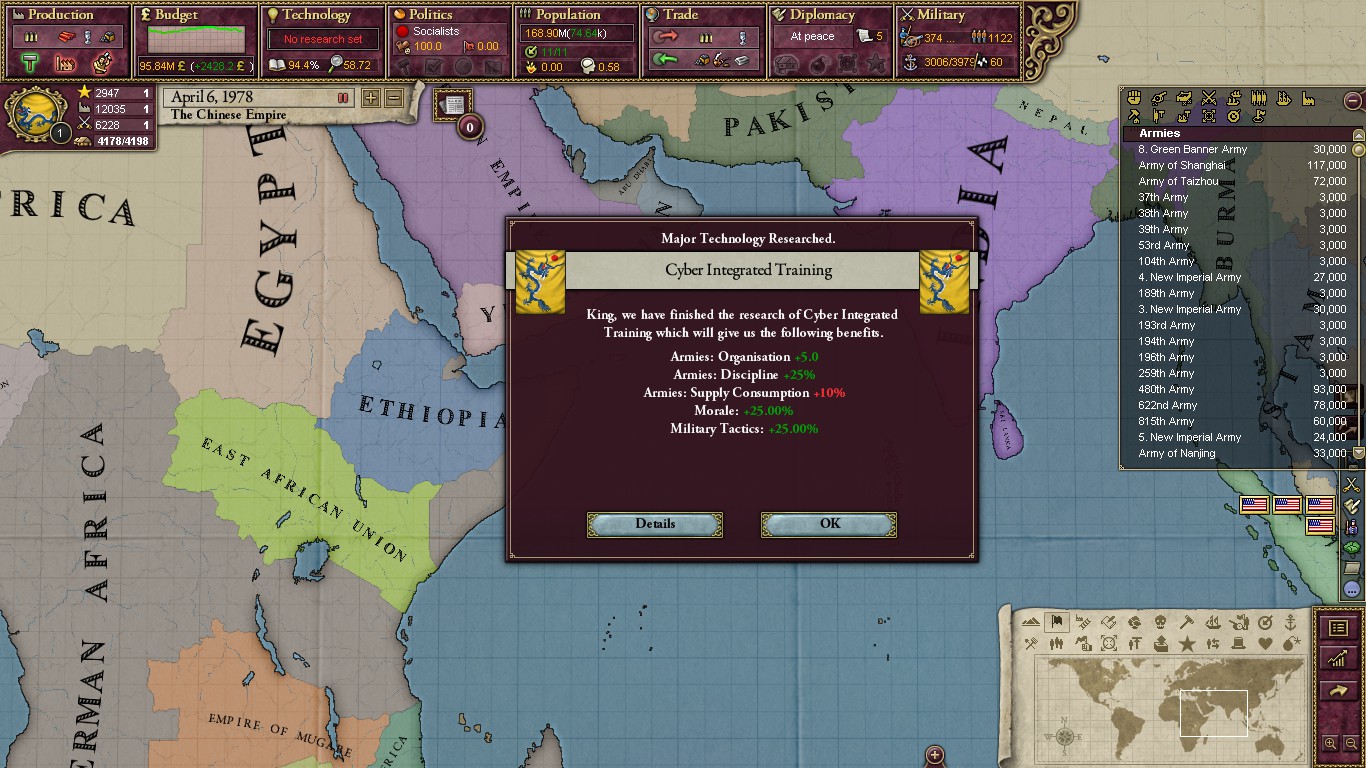 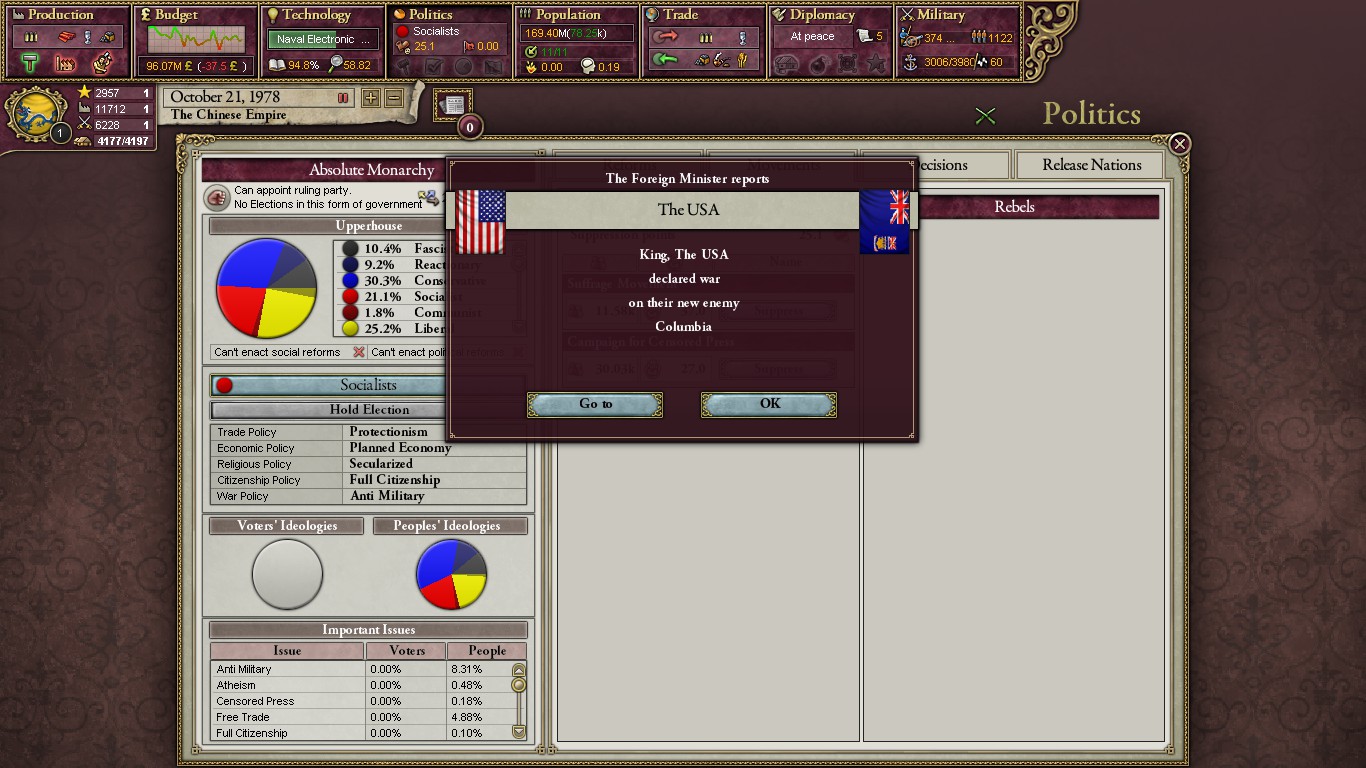 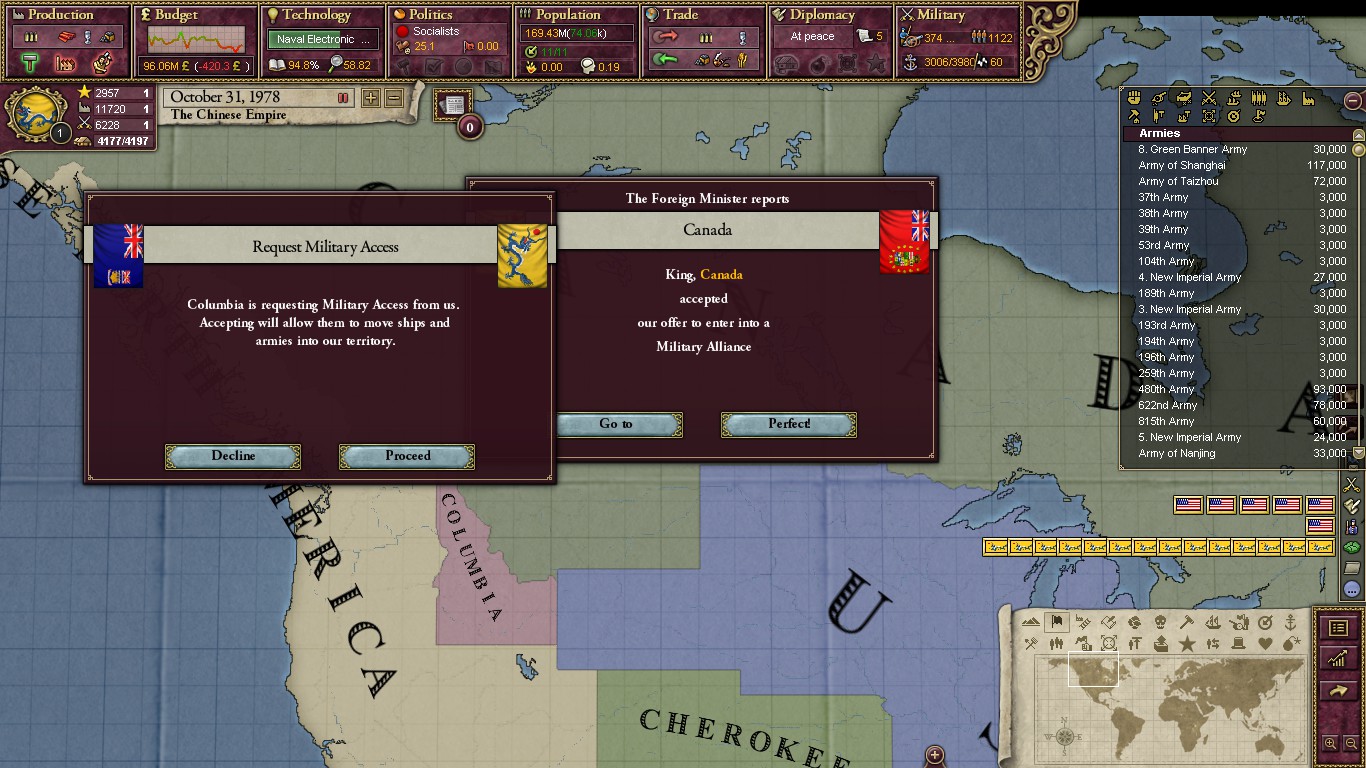 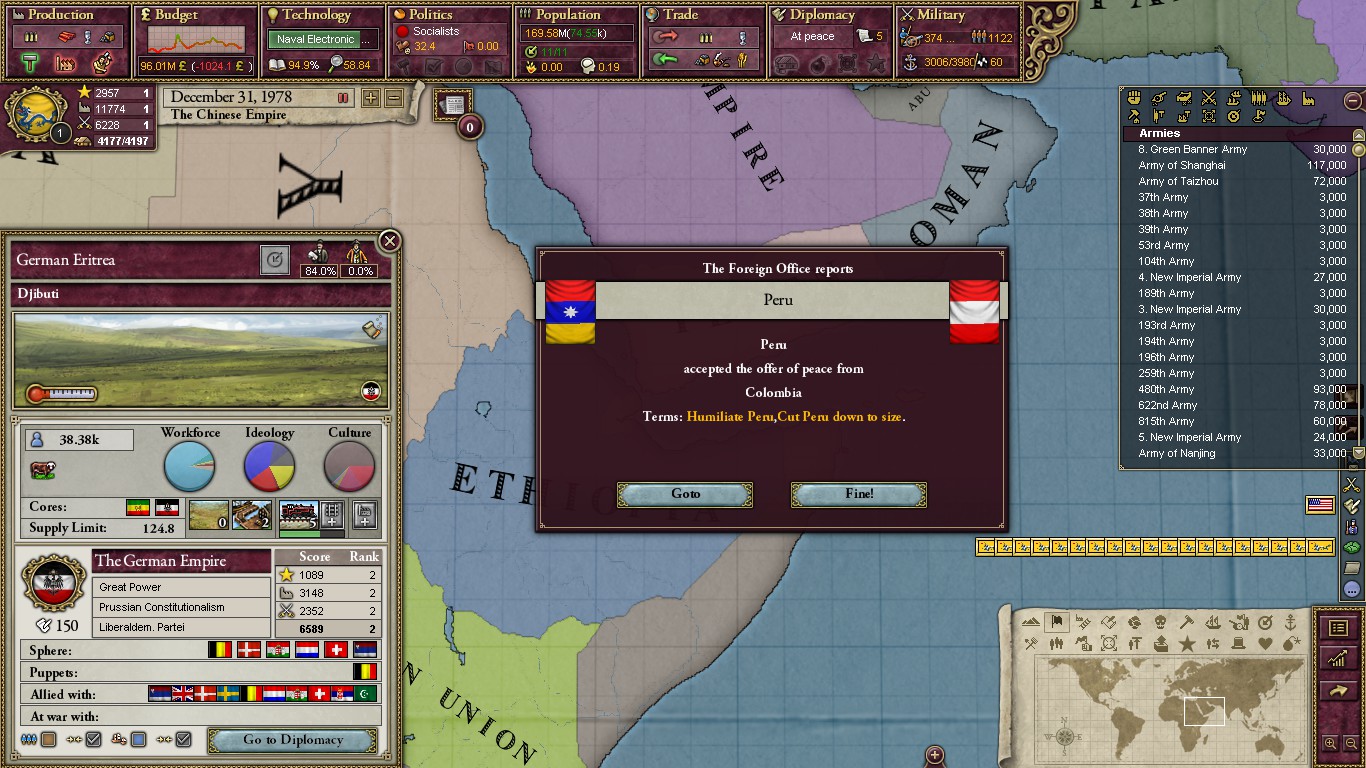 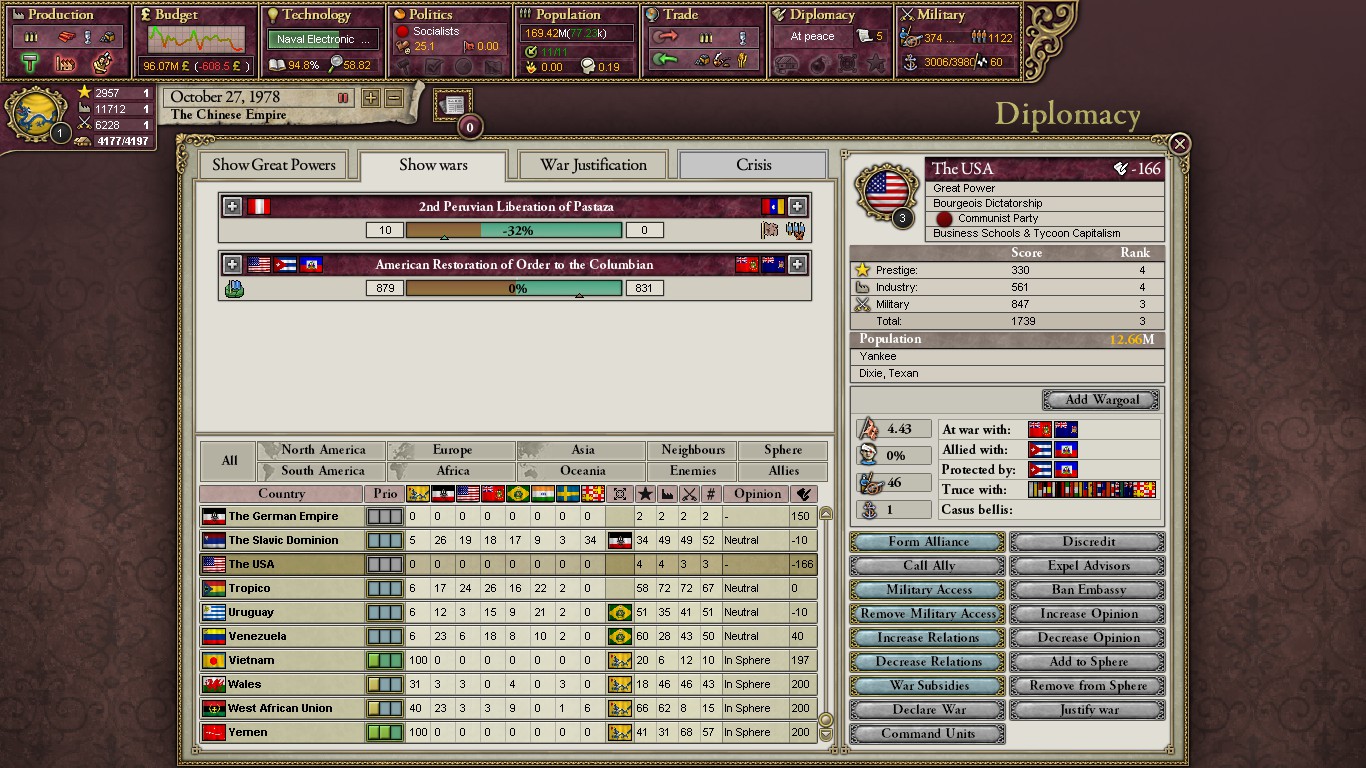 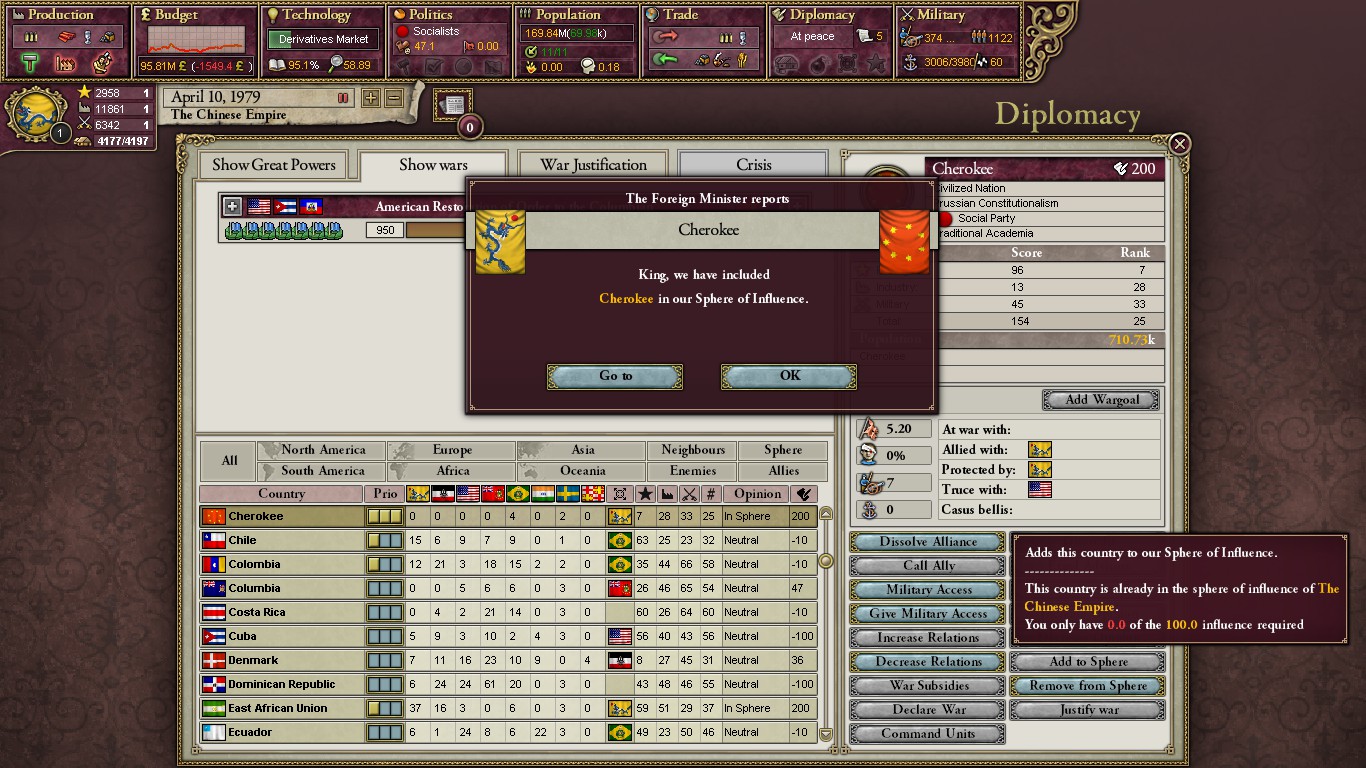 Eventually, the Americans gained the upper hand and declared that the entirety of Canada was rightfully part of the US. 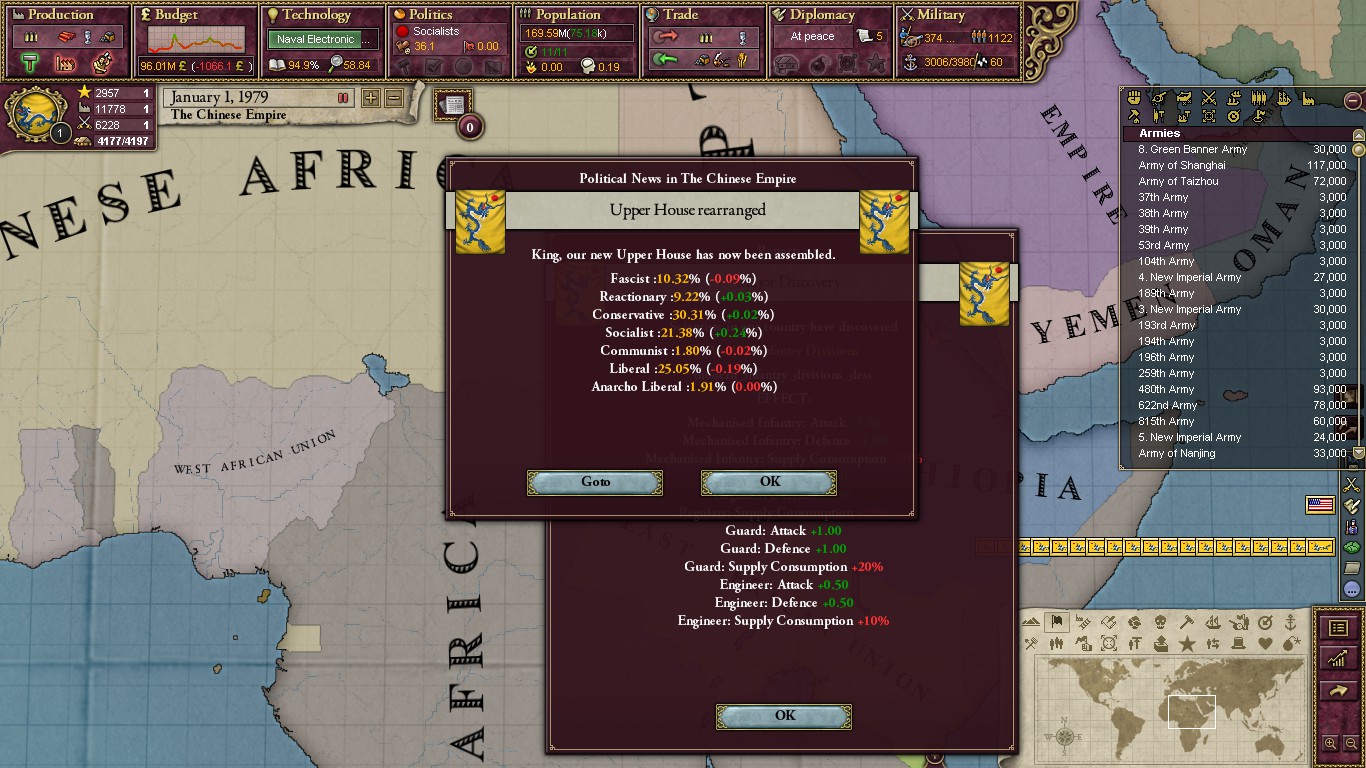 As 1979 began, Wilhelm presided over many reforms to revitalize the faltering Chinese economy. Under the leadership of Economic Minister Zhu Rongji and Chancellor Deng Xiaoping, factories reopened and unemployment dropped sharply. More funds were allocated for the Imperial education system, and literacy was on track to reach 100% by the end of the next decade.
These truly were prospering times for the Empire.

I was hoping that the United States would remain disunited for a bit longer. It was amusing to see them so broken up. At least there's still Texas.
Expand signature
Check out my Inkwell for a list of my AARs

Michaelangelo said:
I was hoping that the United States would remain disunited for a bit longer. It was amusing to see them so broken up. At least there's still Texas.
Click to expand...

Despite the initial American advances into Saskatchewan and Pennsylvania, the Canadians did not give up, and they soon launched a counteroffensive into the heartland of America, capturing Wyoming and the westernmost states. 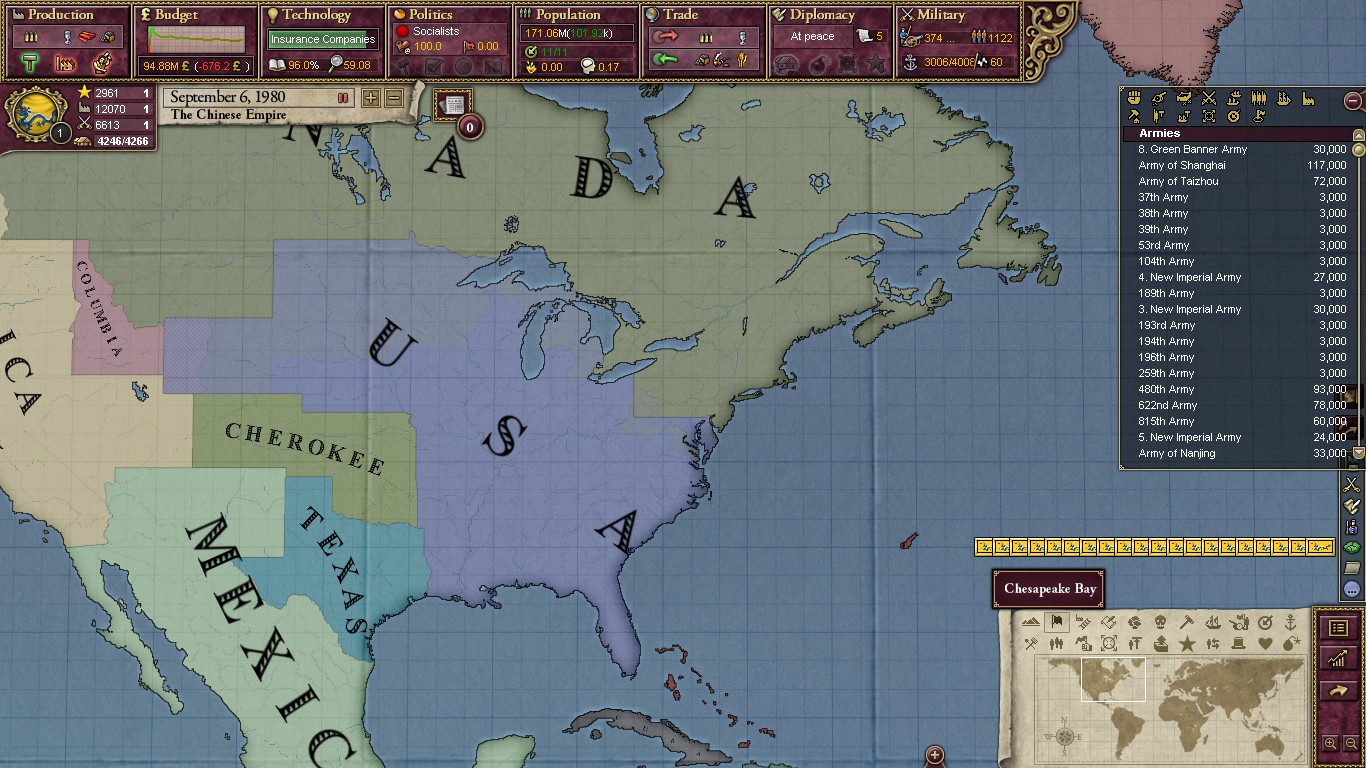 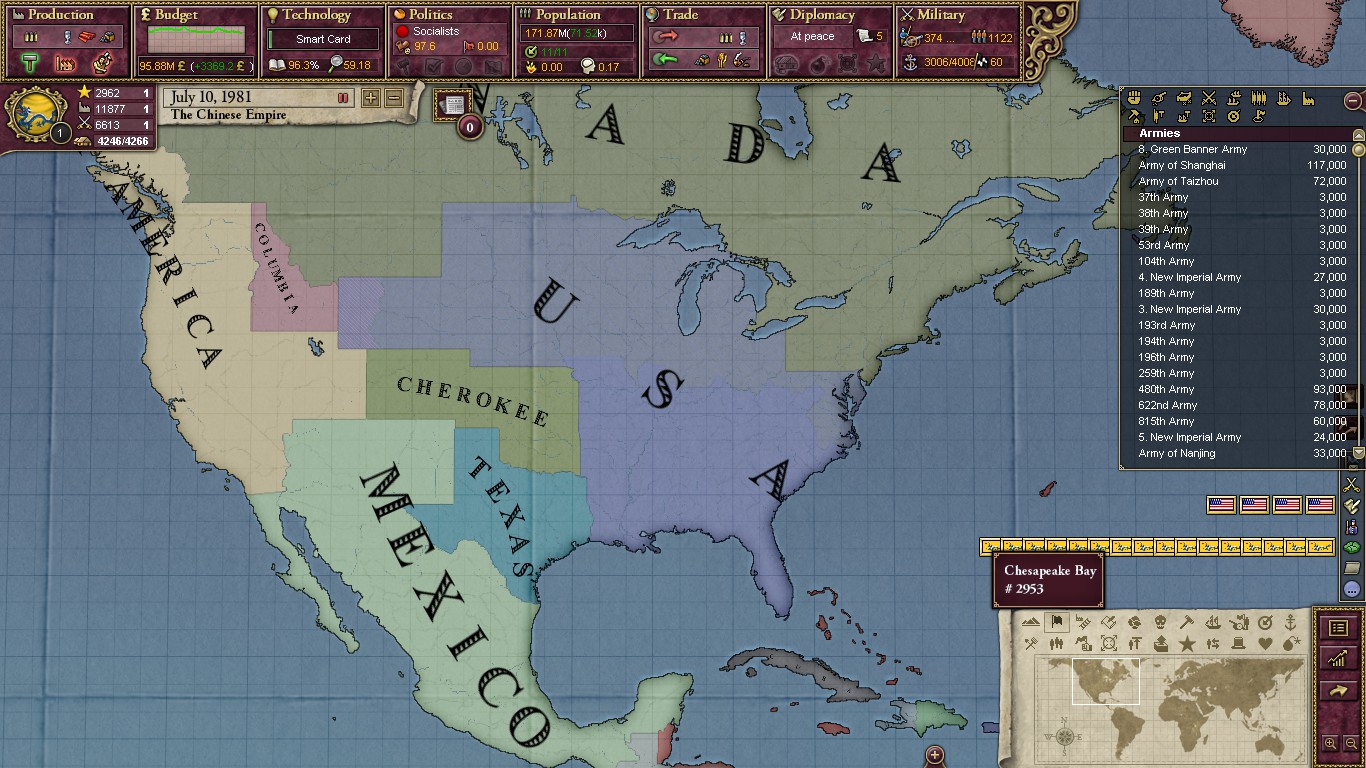 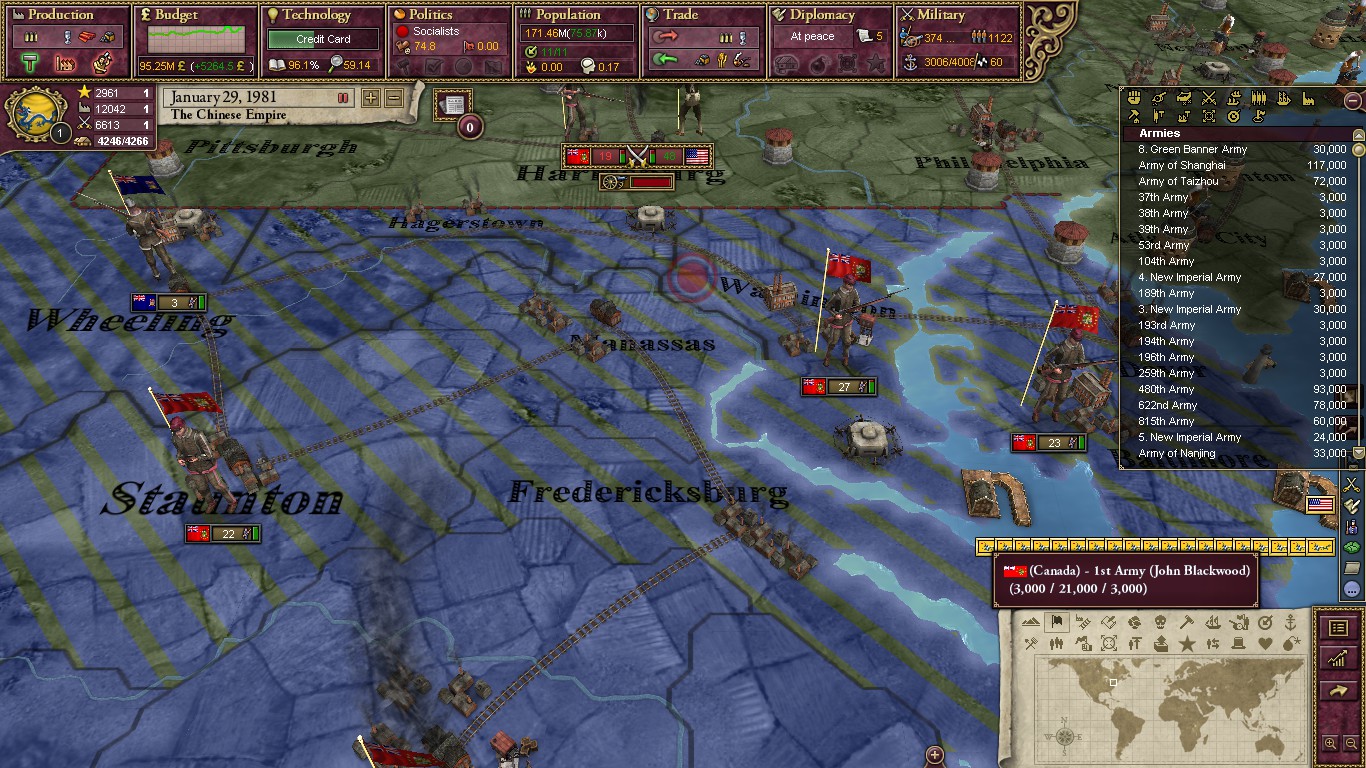 On January 28, 1981, Washington fell to the Canadians, and President Reagan fled to Atlanta as the "Mounties" burned the White House--again. 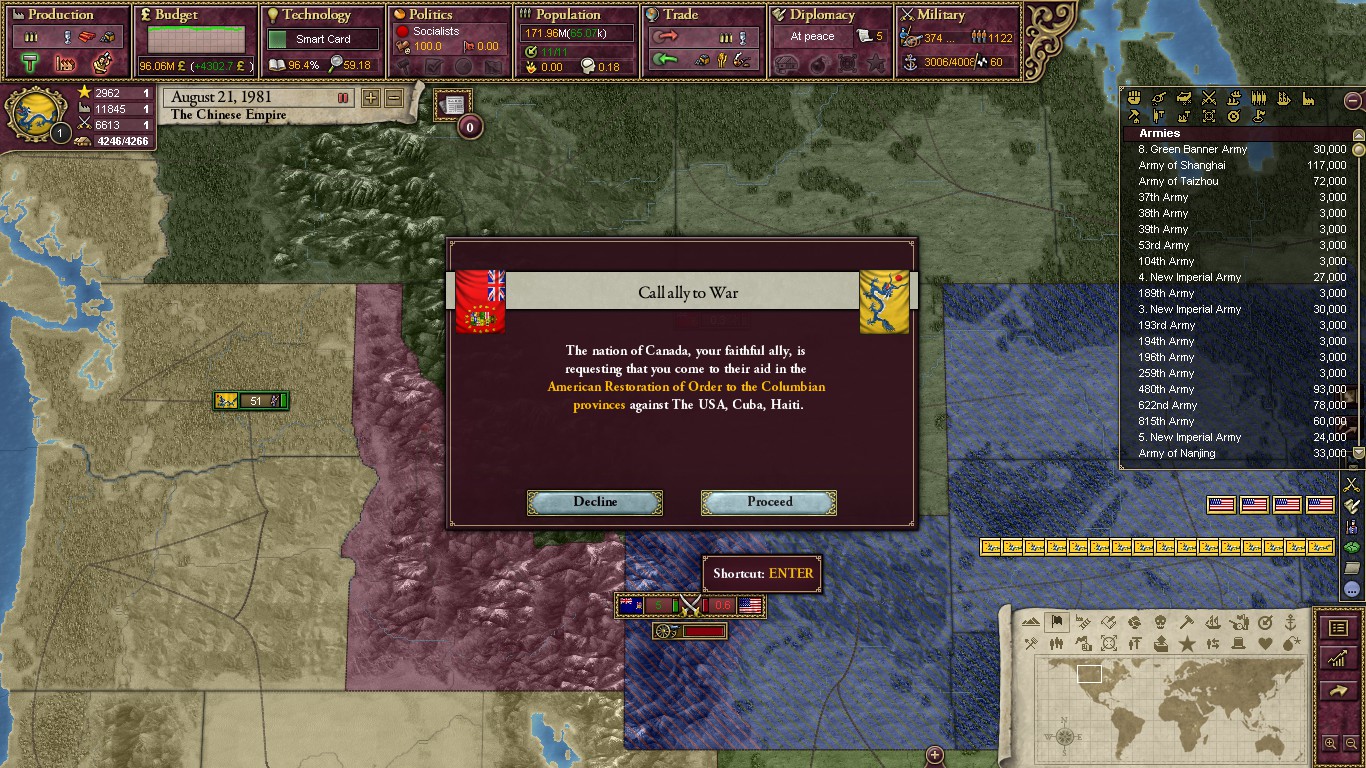 But the Canadian momentum was also stalling, so they called in the Empire. And the tide turned in favor of the Canadians. 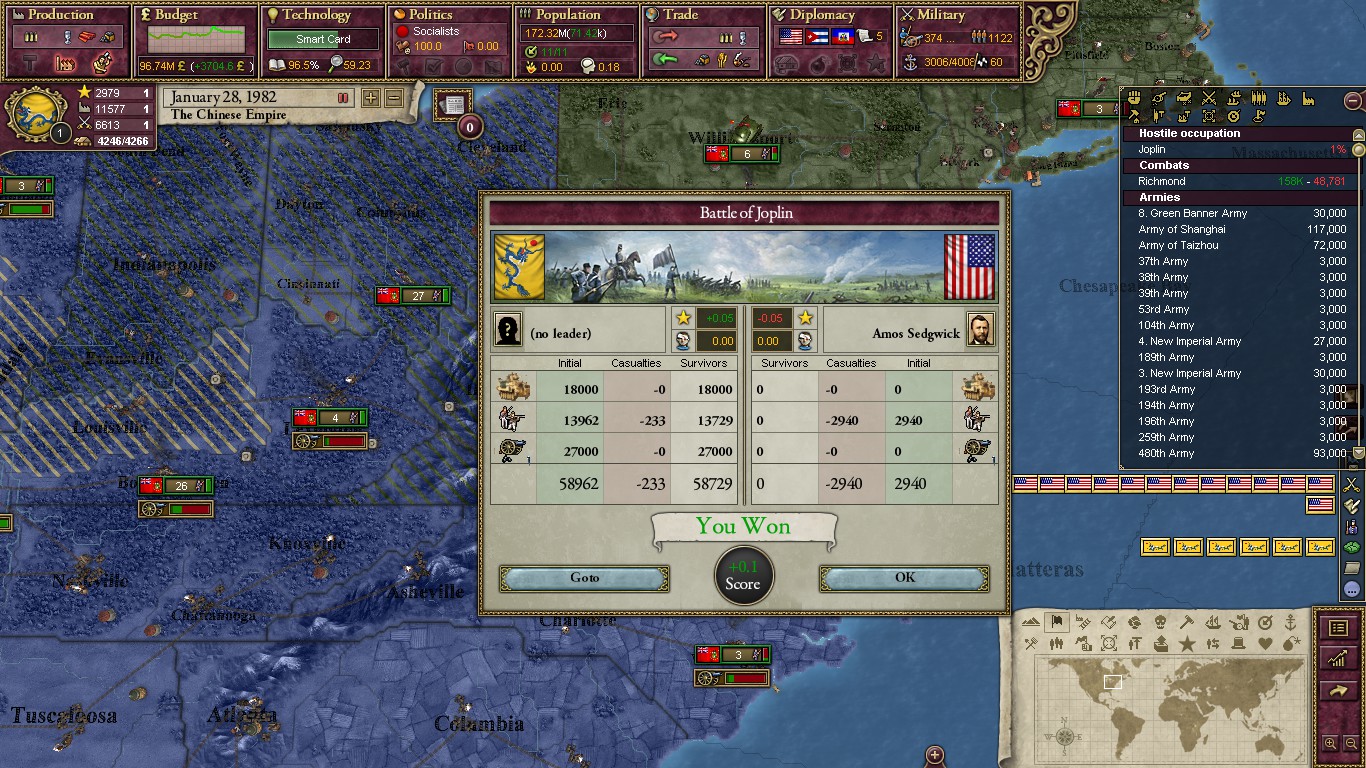 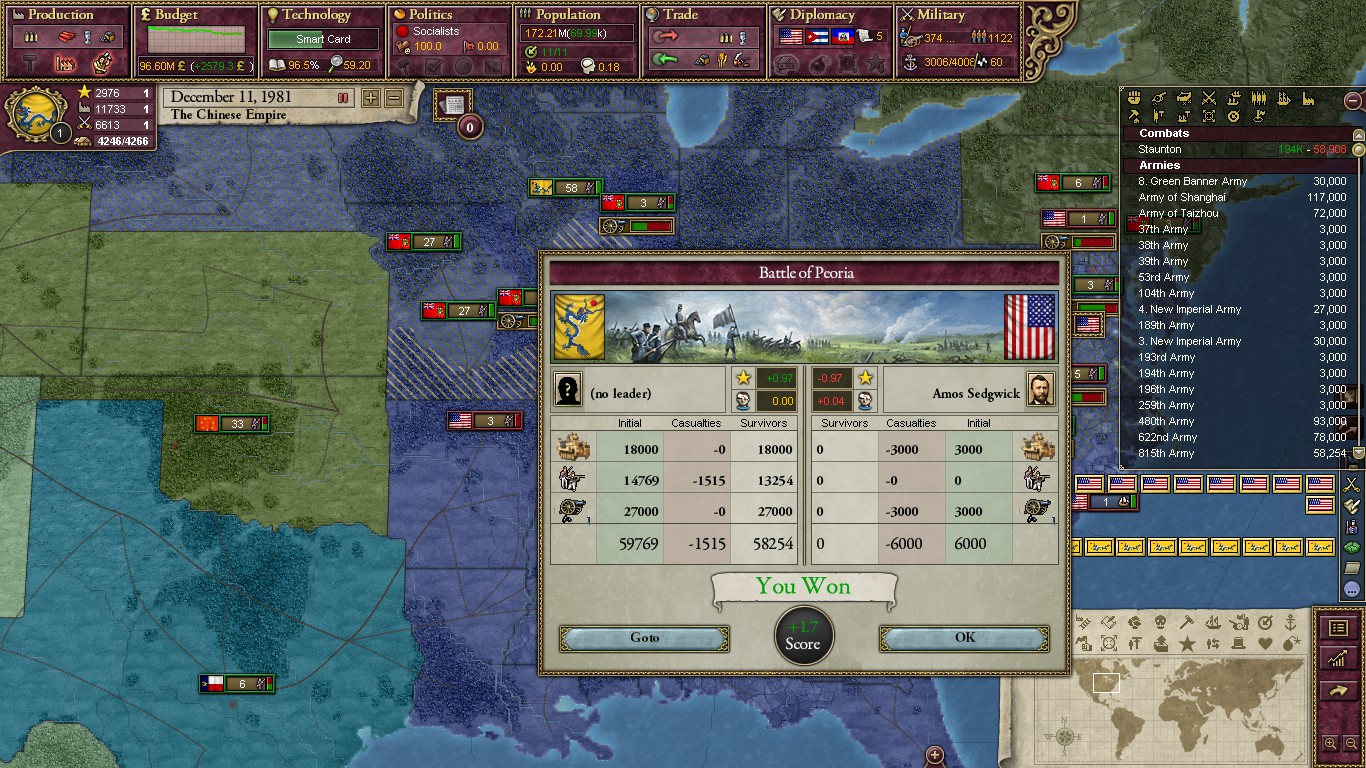 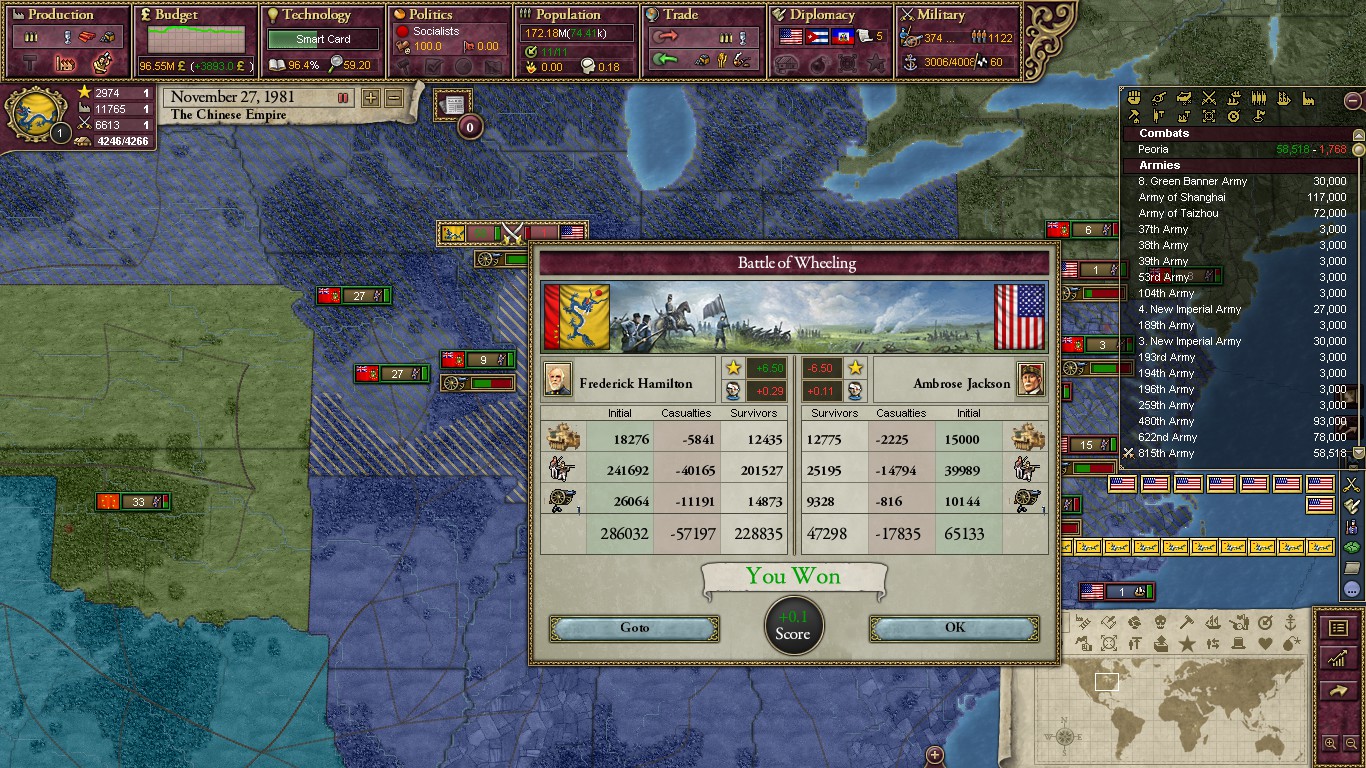 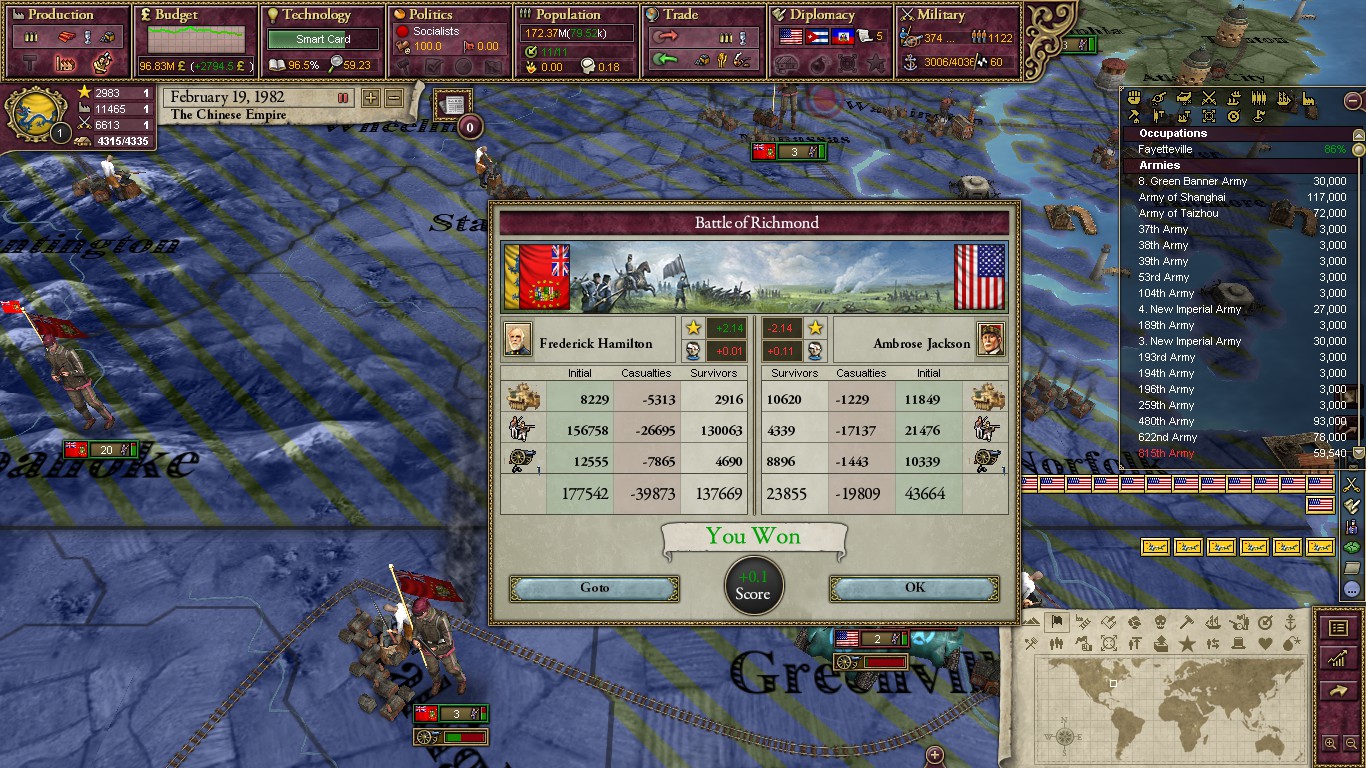 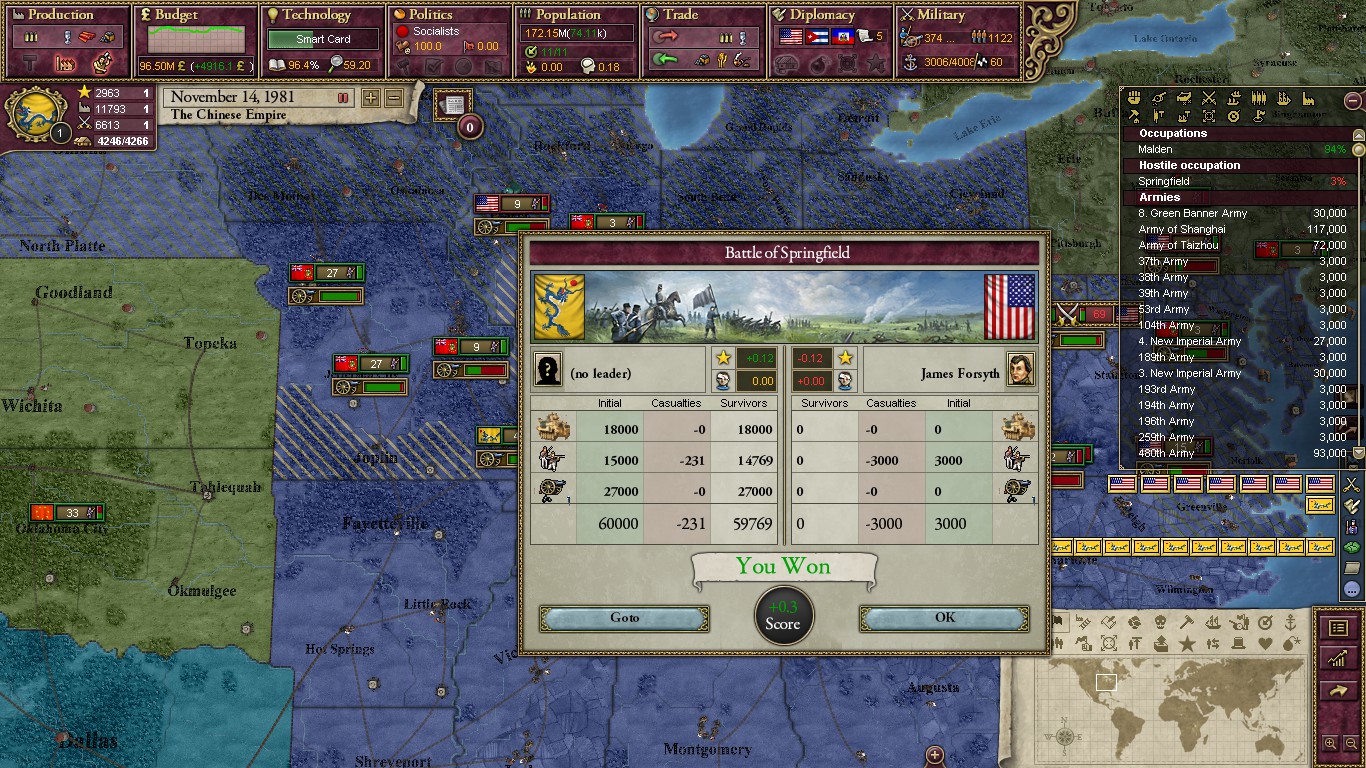 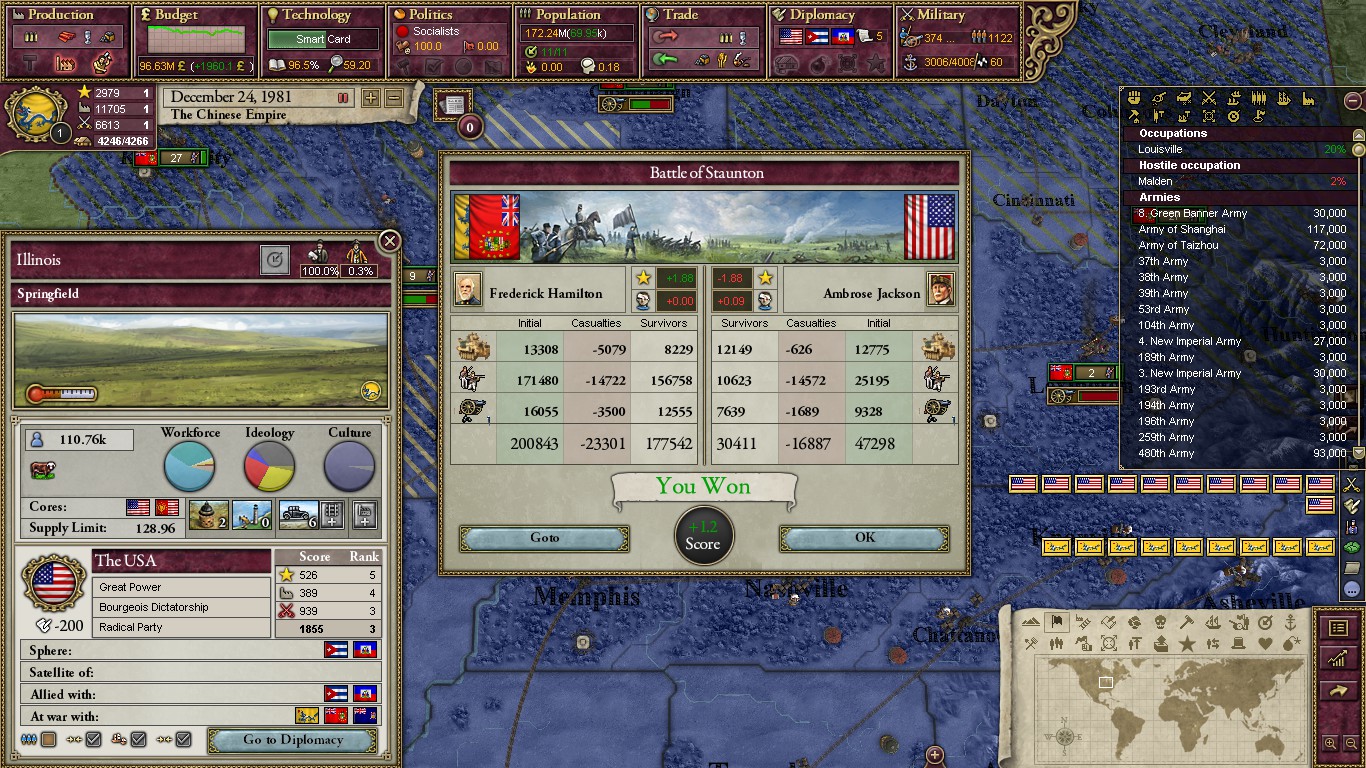 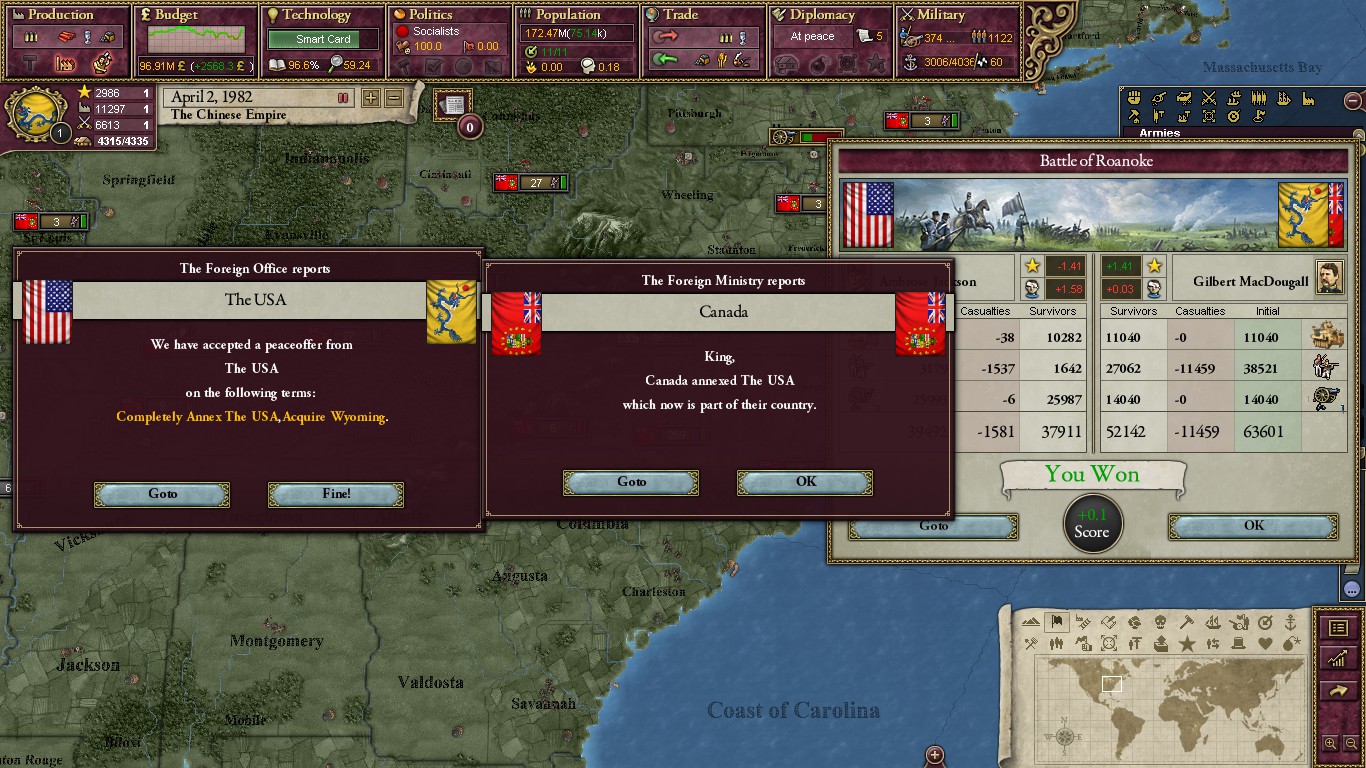 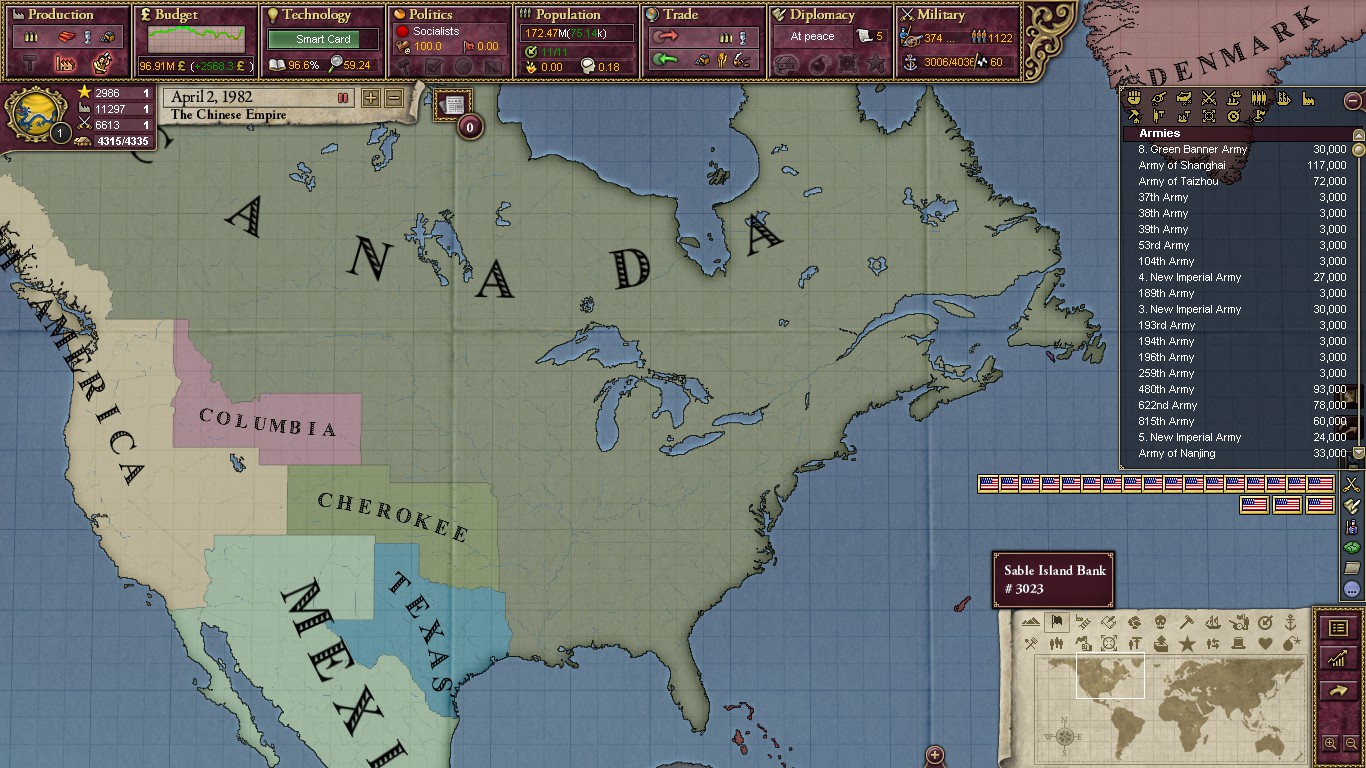 On April 2, 1982, the United States of America ceased to exist. All of its territories (except Wyoming) were annexed by Canada. Belgium became a Great Power again, after decades of being a German satellite. 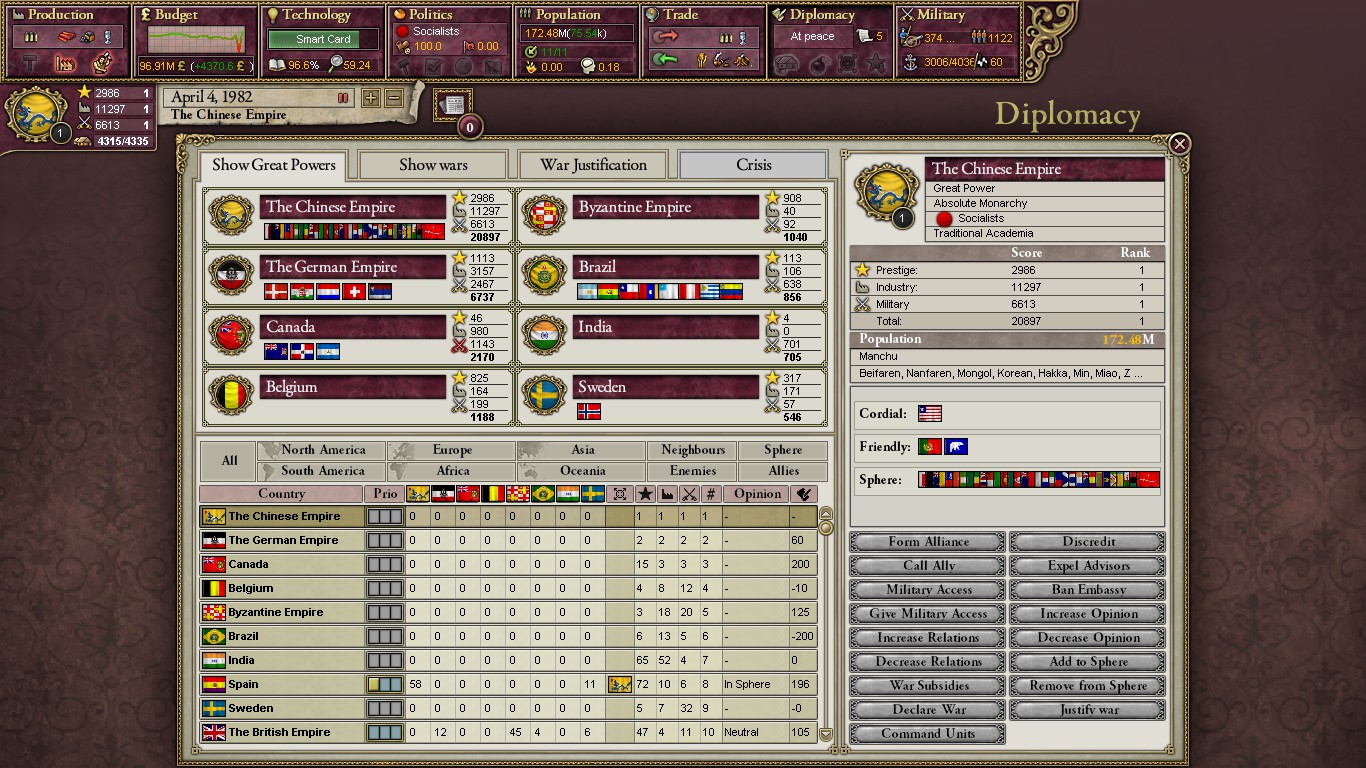 It's... beautiful. This is my reaction every time Canada expands or dominates in your game:

Well, well... Look who's back... In Britain where it should be.
Expand signature
On a self-imposed exile.
"And if this world won't write me an ending, what will it take just for me to have it all?"
V2:
An Eagle Rising - Preußen Polandball AAR [V2][Picture Heavy] (now with more Weltkrieg Zwei!) {Q3 2015 ACAs [2nd], Q2 [4th], Comedy AAR 2016 [T]} [Finished]
Inno al Re - Two Sicilies Italy Aragon Rome AAR [Finished/Abandoned]
EU4: Siegerkranz - An AAR of my first shot at EU4 as Brandenburg [Finished (or abandoned depending on how you cut it)]

In an unfortunate twist of poetic justice, yesterday I found that my laptop had been stolen, and along with it all of my games, save files, mods, and screenshots. As such, I am declaring this AAR on hiatus for the time being, as I cannot continue it in any way. Thank you all for sticking around this long, so I would like to ask you guys one last question: would you like me to write a continuation of what I envisioned the storyline to play out of should I just declare this finished and wait until I can buy a new laptop?
Expand signature
Nominated for Role PlayAAR of the Month for Nov. 2016; Fan of the Week for 4-9-2017, 6-17-2018, 4-19-2019; Character Writer of the week of 9-27-2018; WritAAR of the week of 9-25-2016 and 12-16-2019
Participating in the following iAARs as: The Doukai; Sakamoto Clan; House de Leon (y Asturias y Salamanca); House de Leon (y Asturias y Salamanca); House von Hohenzollern; House de Alvear y Ponce de Leon
Return of the Celestial Empire - A Victoria 2 Kaiserreich AAR
The Hohenzollern Empire - A Roman Reich Megacampaign (nominated for/won Megacampaign of 2017, 2018, 2019): Kaisers of the Romans, Uber Alles (won ACAs Q1/2 '16), The Imperial Century/Iron and Blood [1914+] (won ACAs Q1/2 '16), Götterdämmerung, Fallen Phoenix (to 1987)/Rising Phoenix (from 1987) (in Victoria 2 New World Order)

That sucks that your laptop has been stolen. While I would love to see this continued, I will accept it if you decide to end it here. You've had such a great ride already.
Expand signature
Suum Cuique
Show hidden low quality content
You must log in or register to reply here.
Share:
Facebook Twitter Reddit Pinterest Tumblr WhatsApp Email Link
Top Bottom