Once upon a time the young king of Prussia found himself in a war-torn Europe where Britain and France were the dominant players. He would not take that however. "Prussia", he stated. "Will become the most dominant nation of Europe, under my rule." And so he set off to accomplish his goal. The young king had his eyes on Mecklenburg, a tasty treat for any Prussian king looking to expand his naval influence. However Mecklenburg was guaranteed their independence by several large nations. One being the northern giant of Sweeden. And so the king declared, "We shall defeat their backers!" and he set his eyes on Sweeden. He declared war and a lengthy three and a half year war began.
The fighting was tough but Prussia reigned victoriously. However to the king's demise Mecklenburg had many more powerful backers behind them and so he cast his eyes to the east. Russia was a giant with no friends, AND currently distracted in their own personal invasion of Sweeden (Which was rightly easy for them seeing as how Prussia previously cleared Sweeden's armies). The king decided to catch Russia in their distracted state and for over a year, charged in strong to the defenseless Russian mainland.

The fighting had been rough and tough in the snowy weather, and worse once the main Russian army returned from their conquest of Sweeden, but Prussia won their war with due haste and took a large buffer zone which for now was the first step on the path to taking all locations of importance to Prussia in Russia- 1 namely being Riga. 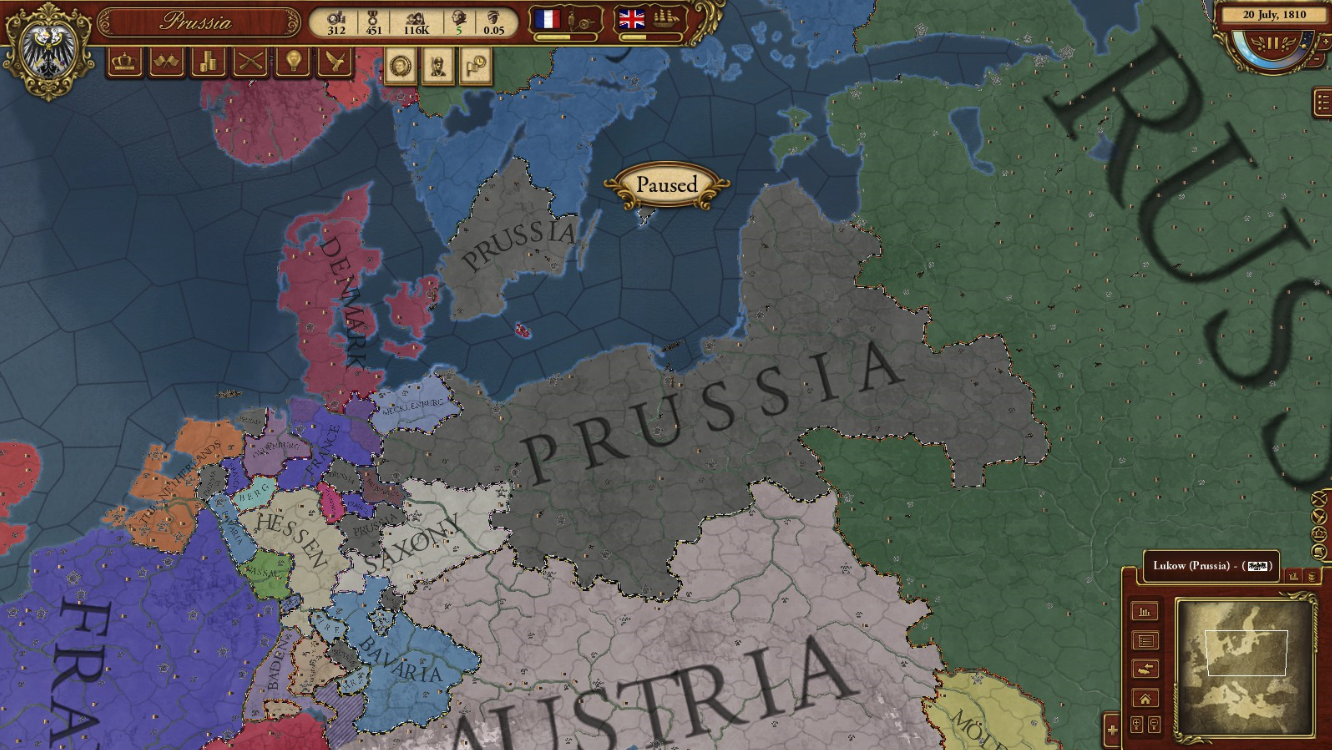 And now the ambitious Prussian king builds and recovers in patience. Soon the Prussian armies will dominate the Russian landscape once more...and with Russia currently distracted by a war with the Ottomans, they will never see it coming.

The Prussian king waited in patience for a year, building up his forces so that when the truce against Russia ended, a second push would be made into their lands so to finish the conquest of all Prussian interests. The Russians had been at war with The Ottomans for the past year ever since peace was made with Prussia and both armies held each other at a stalemate that slowly but surely was slipping into Russia's favor.

One week after the truce between Prussia and Russia ended, Prussia struck hard and deep into Russian territory once more. No resistance was met to over 100k+ Prussian troops and 30k+ Saxon satellite troops. Everything was going well..until Russia became lax of their war with the Ottomans and focused full attention of Prussia.

Prussian troops united and fought a large battle against the Russian armies, demolishing them and forcing them into hiding in the small city of Golm. After forcing them out of the city, the Prussian troops were not expecting with what force the Russians would emerge with. It was there that an army of 55k Prussian soldiers lost in a devastating defeat against but 41k Russian troops.

Prussia regroup and recovered, Russia did the same. The armies met on the field of battle one last time. Russia suffered a devastating defeat against the tactical might of the Prussian generals. They quickly agreed to end the war in exchange for Riga and the surrounding eastern and southern provinces, and so Prussia's interests in Russia have been secured. Austria has attacked the Ottoman Empire, and so Russia will grow strong again as the Ottomans receed. But Prussia's gaze now drifts westward. France has taken Mecklenburg, a key interest of Prussia. The King does not yet believe he has the capability to defeat France (Who also lacks any enemies since peace was made with Britain years before), and so he casts his eyes slightly to the north.

Kiel and Kobenhaven lie ripe for the taking in Denmark and would greatly support Prussia's interests in obtaining dominance in the European scene. With no allies, Denmark will soon fall flat beneath the might that is Prussia.

All hail The Prussian Empire!

Nice! You want me to move this to the AAR forum?
Toggle signature
- O God of battles, steel my soldiers' hearts; Posses them not with fear. - Henry V
- My March of the Eagles mod, The Gods - Updated 09/17/2021

Ah yes! I actually contacted a different mod once I noticed there was a sub-form for that! (But I guess he hasn't been on yet) It would be most appreciated if you did! =)

Moved to AAR section
Toggle signature
- O God of battles, steel my soldiers' hearts; Posses them not with fear. - Henry V
- My March of the Eagles mod, The Gods - Updated 09/17/2021

subbed
Toggle signature
Civil war™ is a registered trademark of the Roman Empire of the East. All rights reserved.
In Loving Memory of Rascal, a Chihuahua. R.I.P - Died July 02, 2015, of a very bad cold.

Almost a year has passed since the war against Russia. And the king of Prussia has taken advantage of his previous friendship with Denmark to strategically position some of his armies into the Danish mainland. Then at the break of dawn in the midst of winter, January 17th 1813. The war begins! Fighting ensued, the Danish were taken by complete surprise. After two months of fighting the Prussians have almost taken the entire Danish mainland. It was then that the Prussian King decided to test his newly improved Navy against the scattered Danish Navy. The new might of The Prussian Navy caught the danish off-guard and they fell swiftly. Prussia captured several Ships of The Line with ease and celebrated while the fight on the ground continued. By June the entire Danish mainland had been conquered. Denmark was at Prussia's mercy, and the rest could easily be conquered and annexed if Prussia would will it. However annexation was not in the king's interest. He had taken an important province to secure Prussia's naval domination of Europe. So once again his interests drifted, this time to France. France had resumed their war with Britain at the same time Portugal had begun retaliating to get some of their land back. To make it worse for France, Spain had begun to fight against France in their own interests. France was fighting a two-front war, north and south. Currently, they were winning their war in the south.

Prussia had a plan to take advantage of this. He'd bolster his armies for the next few months and watch the war develop. And soon the war against France would begin. With strategical goals in mind, Prussia prepared. With France's armies distracted, they stood no chance. The Mighty Napoleon would soon fall to Prussia! Nice to see some MoTe AAR.
Toggle signature
I'm French. English is not my native language. I apologize for any mistakes.

(Apologies, I forgot to take pictures during my last session until all the action was over because it was a very strategically-intensive session and my mind forgot. Apologies, I shall try to replace the eye-candy with some textual mind-candy eh? I will try to get better at taking pictures in all future posts and AARs however.)

The time had come. All places of relevance to Prussia had been conquered in Sweeden, and half of those in Denmark. A move was to be made on the mighty empire of Napoleon! One war to obtain Prussian dominance in Europe! There was no way France could win! They were fighting Portugal and Spain in the south, Britain to the north, and Russia attacked them from the seas.

The invasion began, Prussian armies marched valianty into French territories containing of Mecklenburg and other conquered satellites. To assist the invasion, the King of Prussia gave military access to Britain to allow them a land passage into France in order to support the Prussian offensive.

However...shortly after the offensive began...Spain and France made a white peace. Then to boot things off? Shortly after that France defeated Portugal and took them as a satellite nation. The full might of Napoleon's (rather worn and beaten) armies fell upon Britain and Prussia. (With Russia supporting the Brits in naval battles).

France was weak in terms of naval strength, so Prussia supported all sea-based sieges with a blockage of the newly improved Prussian Navy. The Prussians began to lose around 40% of the land battles thrown at them however. The troops fell back and regrouped and held the line on eastern mainland France while reinforcements could be replenished.

The British army pushed forward, distracting at least half of the french army very well. However the French land army was one of the biggest and strongest in all of Europe. France still easily matched everything Prussia could throw at them, and so the battles began to grow very balanced in result.

Then the Prussian King shouted angrily in disdain. An enemy from the past had reared their ugly head yet again! Sweeden had returned with a declaration of war, determined to reclaim the land conquered by Prussia years before. Sweeden was weak now however. They lost so much land to Prussia and Russia that they had to lower the size of their army dramatically. One Prussian army of about 33 thousand troops held off any and all incursions into Prussian territory while the main army fought against the might of Napoleon.

Prussia was not led by a ruler unaware of strategical consequences however. A two front-war was not optimal for any commander of any army. It was a situation that could bring even the most successful and unmatched armies down. So the Prussian king united as many armies as he could and fought the French at every turn with full might. Several important battles were won and a few more key cities were taken in addition to what was already conquered before the French turned full attention from the south to the Prussian army.

Towards the end of what Prussia could dish out, enough doubt had been instilled into the mind of Napoleon that the king of Prussia could get away with two meaningless cities from the French and obtain peace. One was of interest to the king, but it was not what he had hoped for in the war. So he quickly turned his attention to the source of his aggravation. Sweeden.

He marched all armies into Sweeden and conquered enough cities in a straight path north until they realized that they were once again outmatched. They begged for peace but the king marched forth until he had intimidated them into an agreement that suited his needs.

By the end, Sweeden was a shell of its former self, and the king once again prepared for war on France.

"No more distractions. No more mercy. Only war."

The newly expanded Prussia was ready to complete dominance of Europe. It was only a matter of time. However the king had to figure out how to face one problem. His allowance of British interference on his front allowed Britain to beat him to one key city that he required for his dominance over Europe. This was a problem that would have to be dealt with...but first...recovery. Then...Conquest! (Post-Wars. Again I promise I will try to take more pictures next session, no matter how crazy the action gets.)

That, ladies and gentlemen, is the most hideous type of gore possible; border gore!
Toggle signature
Civil war™ is a registered trademark of the Roman Empire of the East. All rights reserved.
In Loving Memory of Rascal, a Chihuahua. R.I.P - Died July 02, 2015, of a very bad cold.