Now that we have an inventory system in the game and a more granular maiming system, it's a great time to dive into the history of prosthetics and how they could be implemented in the game.

As anyone who has been...stumped...by their life choices or vagaries of fate knows; two hands are better than one. This also applies to legs, incidentally. Eyes need not apply.

People have used all manner of prosthetics since the Egyptians, because of course the Pharaoh can't be seen awkwardly walking around with just one big toe, did you think he's just a super privileged dude with a overly complicated hat? Naw man, he's godly. Literally. 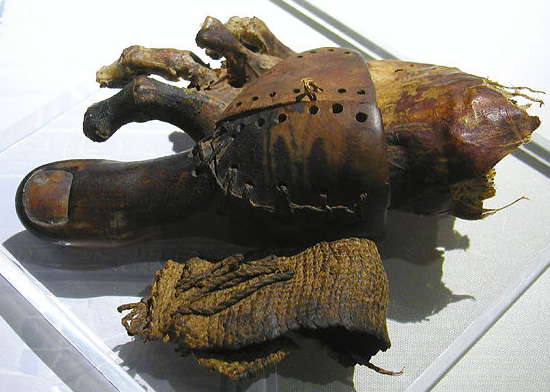 Then there's the Greeks, and as usual they get in to all kinds of shenanigans: Like the story of Hegesistratus, a Greek diviner who cut off his own foot to escape his Spartan captors and replaced it with a wooden one. They don't mention how he got away from Spartans on one leg, but I assume he either never skipped leg day or he rolled out of their way...
Or the tale of a Roman general, Marcus Sergius, whose right hand was cut off while campaigning and had an iron hand made to hold his shield so that he could return to battle. He gave himself a helping hand. Literally.

So what's an Iron Hand then? Only one of the coolest historical mechanical things ever. Aside from an actual working, unsevered or mutilated arm of course.

That's the second prosthetic hand commisioned by Gottfried "Götz" von Berlichingen (1480 – 23 July 1562), also known as Götz of the Iron Hand. He's also famous for his name(Berlichingen, I assume) becoming a euphemism for a vulgar expression (Er kann mich im Arsche lecken – "He can lick my ass"). A pretty rad dude all around.

Since we can already commission various master smiths in game for blinged up weapons and crowns, why not a supremely cool, and useful, prosthetic. Needless to say they won't come cheap, except wooden legs or similar simple prosthetics that might be acquired more easily and hence be less awesome.

Gameplay wise they'd function similarly to the treatments administered by Physicians; they won't increase your characters stats, but will compensate for any negative modifiers.
This would mean that while equipped the prosthetic would lower the Personal Combat Ability and other negative modifiers related to the injury in question, but not so much(except perhaps the most masterful pieces) as to completely eliminate the penalties. Some opinion and prestige bonuses could also apply.
Lastly it would give an excuse to add a new nickname: "The Iron Hand"
Expand signature
"Kaiken viisauden alku on tosiasioiden myöntäminen." - K. J. Ståhlberg
"The source of all wisdom is the acceptance of facts."