[Prison Architect] Announcing “Cleared for Transfer”, the next free DLC

Jump to latest Follow Reply
Menu
Install the app
You are using an out of date browser. It may not display this or other websites correctly.
You should upgrade or use an alternative browser.
Prison Architect 363 Campaign 1 Escape Mode 8 Modding 38 Suggestions 193 Support & Bug reports 1018 Mobile 55
Show only dev responses

We are happy to announce “Cleared for Transfer”: the next free DLC for Prison Architect, available on May 14th! Join us live on twitch.tv/paradoxinteractive today at 17:00 CEST (8 AM PDT) to find out all about it.

Cleared for Transfer will bring new mechanics to your prisons, such as the possibility for Inmates to move to another Security Sector if their behavior meets your expectations.

Yes, you read it right - YOUR expectations! It is up to you to decide what are the requirements for prisoners to apply for a transfer to a lower security level, and use benefits as an incentive to make the transfer appealing to your inmates.

You will also get more options to control the cell quality in your sectors - and we will be including other room types to this system.

Along with Cleared for Transfer, we will also be releasing a free update called the Bucket. This update will bring you more items, more cosmetic options, quality of life changes… and Gyms!

New Features Breakdown:
Prisoner Transfers: Prisoners can now transfer between sectors (or wings) of your prison. Requirements for transfer to a lower-security sector are entirely up to you.

Special Privileges: Privileges can be assigned based on the security sector, giving your prisoners a motivation to transfer. Prisoners in high security areas are able to see the privileges given to lower security sectors.

Room Grading: You can now grade other rooms, such as yards, classrooms, common rooms, and a new gymnasium.

New Actions and Enhancements: You can initiate actions like shakedowns, tunnel searches, and lockdowns by security sector.
Reactions:

Happy to hear that.
E

So you can bring this to PC, but you still haven't bothered giving us All Day And A Night?

Is this coming to PS4

Looks nice! I can't wait to try these new features!

Also, I don't want to look like I rant, because I do love this game and spent nearly 200 hours in it so far, but a few fixes would go a long way to improve the game tremendously (in my opinion).

These are in no particular order :

2- Better program schedule : once you have multiple wings with multiple programs, it just becomes a chore. Dozens of parole hearing and spiritual guidance. It gets frustrating to add more rooms and more programs, with existing ones sometimes changing rooms and times. The program schedule sheet should fit on the screen (at least we should not have to scroll 4-ways to see everything), and the program notepad should also be revamped.

3- Cloning rooms should give the option to also clone utilities (electric cables, water and hot water pipes, cameras and automatic doors connections), along with, why not, program schedules and patrols and stations.

4- I wish I could assign workers to import rooms, export rooms and garbage rooms, doctors to medical rooms, cooks to kitchens, etc.

5- In general, improving guards and (especially) workers AI. When there are a lot of tasks to complete for guards or workers (shakedown, building a complex wing or a long electrical line), sometimes, instead of having one or two employees do all the tasks because the tasks are closer to them and to one another, each employee will do one task, which in turn ensures some tasks are left behind, because the employee is coming from all the way across the prison, instead of having the closest one just take a second to finish...

6- Related to the previous point : shakedown can sometimes take forever, because few searches take a long time to complete (read previous point) during which time other searches must be redone (is it a timer after which searches are null and void or because someone broke the law in my prison? I don't know), but then, it also takes forever to search and other searches need to be redone, which take long enough for other searches to be redone... and rinse and repeat again and again. Sometimes for days!

7- Also related to #5, let's say a prisoner tries to escape. He's tazed by a guard. But the prisoner will wait for a different guard to put him in cuffs, and another one to search him, and another one to escort him to solitary. A lot of waiting time in between, and lost efficiency. And if a prisoner tries to climb a wall with a rope? The rope will stay there and every prisoner will rush to that square, and the guards will beat each one of them, instead of having one throw the rope in the garbage as soon as the first wannabe escapee is dealt with. So you have to manually dump the rope, which is not done automatically and sends a worker to do it... But if they are all busy building a new wing, it will take hours to be done.

So, let me repeat, I love this game, and I can't wait to try the new DLC, but if you could add a few more fixes from my list, I would be very very happy!

Best news since Introversion gave up on the game.
R

Best news since Introversion gave up on the game.
Click to expand...

Thank god they did this lol. I made two versions of each room like chapel, workshop, classrooms, etc. with the specific purpose of letting medium and minimal security being able to mingle together while the maximum security is completely isolated. I marked the room maximum only and when programs come in no one shows up to that one and they all mix together. So every day during programs, fights would break out and usually result in a couple of fatalities in those rooms because the max-sec guys sometimes one-shot people. I don't want to station guards in the program rooms because it makes them less likely to pass.

One other thing I really wish they would do is to mark path directions for specific security levels. You are able to do it with visitors and stuff but not individual security levels. I made my prison have one main path and a couple smaller ones just for max security but they always take the main path and usually get into a fight with the lower levels.
H

The Bucket update is going to be "the same" as The Sneezer, The Slammer (etc.) updates. It will bring the new content, fixes and improvements. There will be also a DLC that's free which will expand some features even more. Mainly - the prison policy.

A lot of the upcoming stuff can be seen on this video:
Here's a couple of screenshots: 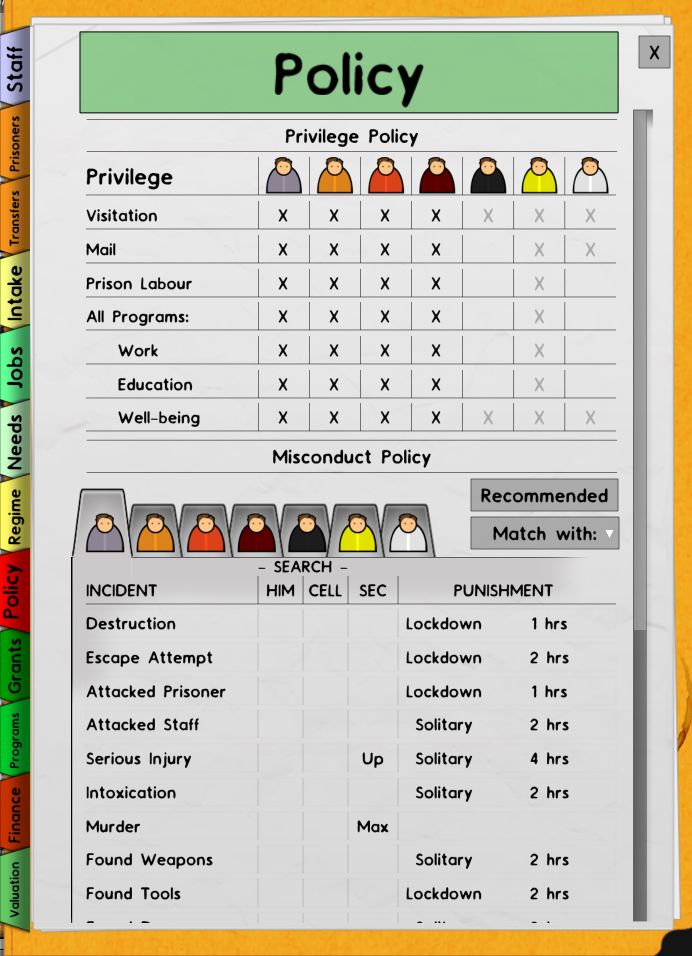 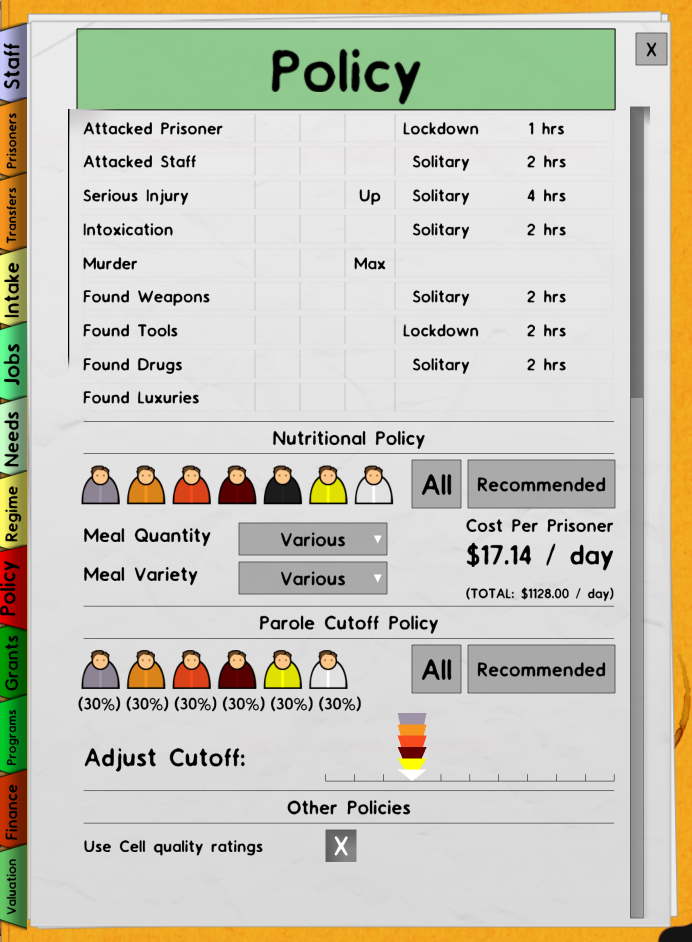 badAim said:
The Bucket update is going to be "the same" as The Sneezer, The Slammer (etc.) updates. It will bring the new content, fixes and improvements. There will be also a DLC that's free which will expand some features even more. Mainly - the prison policy.

And again, will this be coming to Xbox and PS4 versions?

@GoHeat1988 maybe, the devs are working on the console version as well but I don't know what kind of content it's going to be.
Toggle signature
Prison Architect Beta Squad member! • Discord: badAim#8053 • PA Discord • PA Wiki​

I'd like to see some advances made for escape mode.
Like the ability to upgrade your crew member's reputations.
More prisons released to play on.

Wow! I kind of forgot about this game and I looked it up on Steam and wow... I've missed a ton. I think last time I played was before PDX took it over, so right around it's release from Early Access.

Needless to say, it's getting re-downloaded.
Toggle signature
Just a Canadian looking to move to Sweden.
B

If only they’d release this for consoles as well.
U