Jump to latest Follow Reply
Menu
Install the app
You are using an out of date browser. It may not display this or other websites correctly.
You should upgrade or use an alternative browser.
Europa Universalis IV 77196 EUIV: Suggestions 16757 EUIV: Technical Support 6027 EUIV: FAQ & Strategy Guides 202 EUIV: AAR's, Let's Plays, and Fan Fiction EU IV: Alternate History Short Story Contest Contr 26
Show only dev responses
D 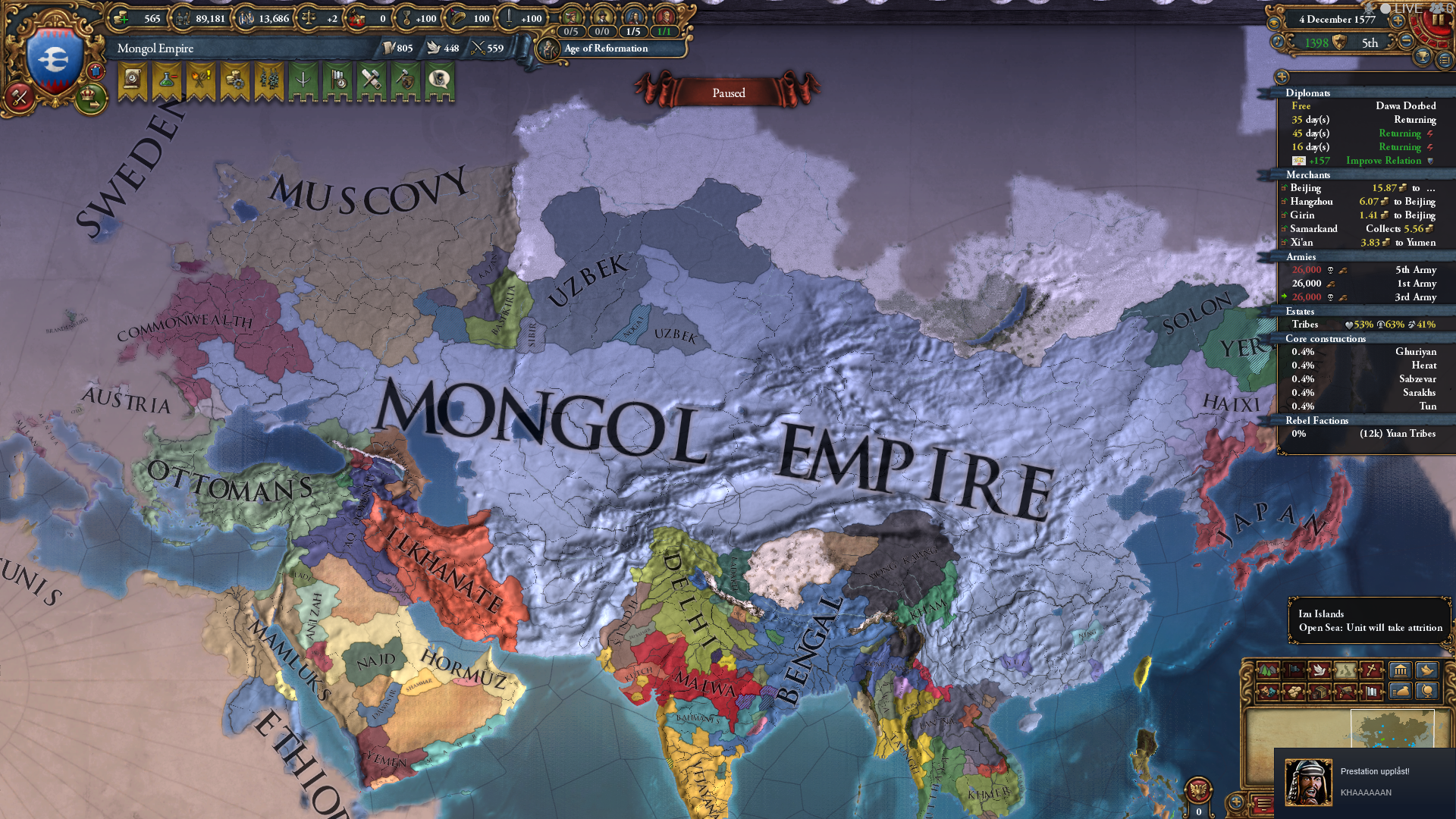 Went for the new KHAAAAAN achievement since hordes is my favorites to play. Could probably have done it faster, but was a chill game. Started with Oirat.
Reactions:

Here is my Ultimate Military. Luckily Ottoman forced Commonwealth to spit out TO just as Global Trade was about to spawn. Not so luckily game started crashing at the same date just a bit after I no-CB'ed them. Switching to the beta patch helped. Economic branch of the mission tree still broken though.

First game in 1.32.1 BETA patch so obviously to pick any of fav nations, and becayuse there are only 5 to choose, I went Aragon.

Among thousands of possible gameplays as Aragon, this time pretty usual Aragon -> 2 Sicilies -> Italy. Wanted to test revolution, so Rev. Italy, and finally Roman Empire only to add diplorep while annexing last vassal.

I don't know what makes ths patch so easy... For sure changes to warscore and maybe AE, but at least in BETA AI is not working properly. Not hiring advisors, removing forts..... Not seeing Brema, Frankfurt, Hamburg etc with 9lvl fort is always nice 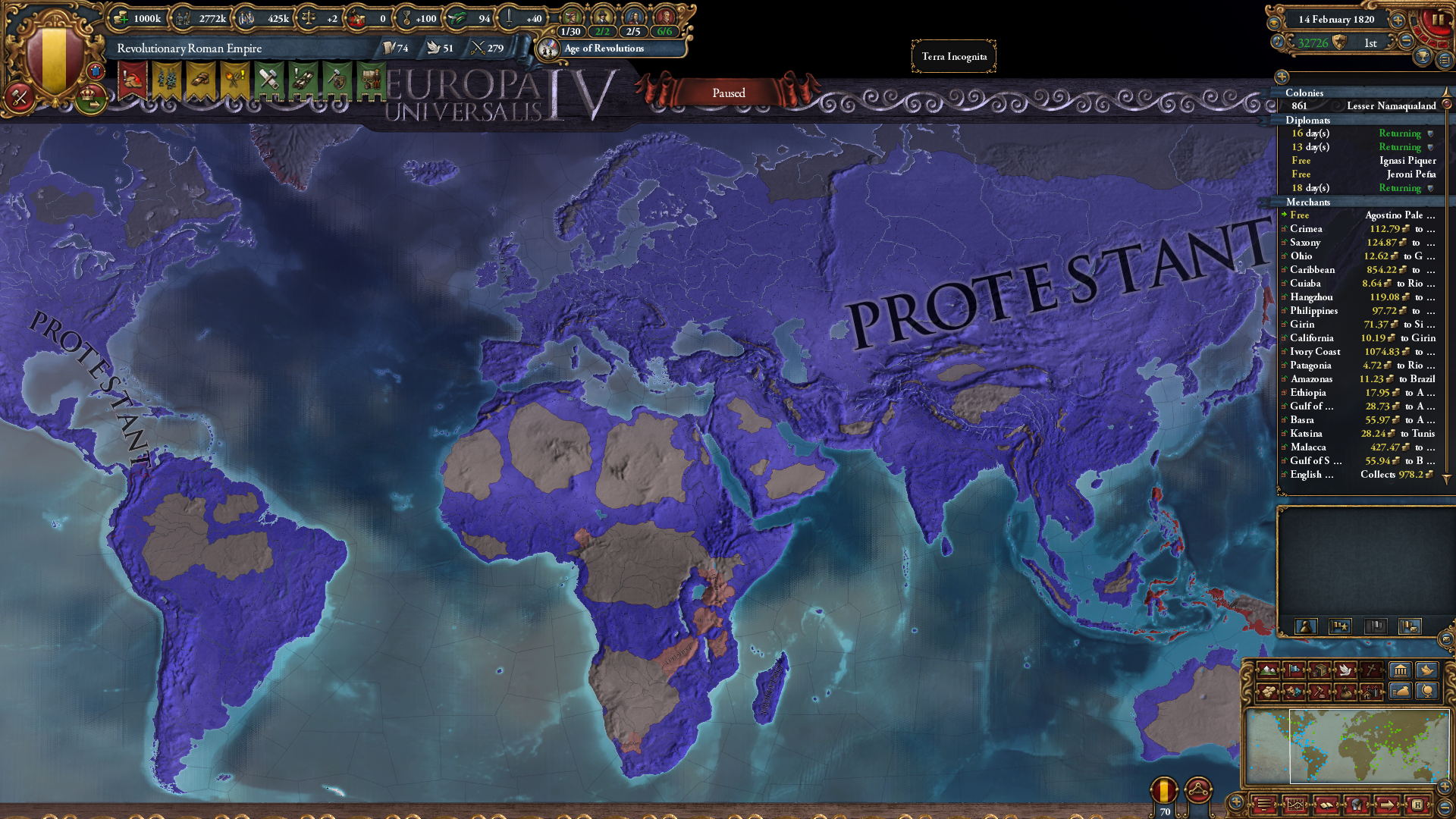 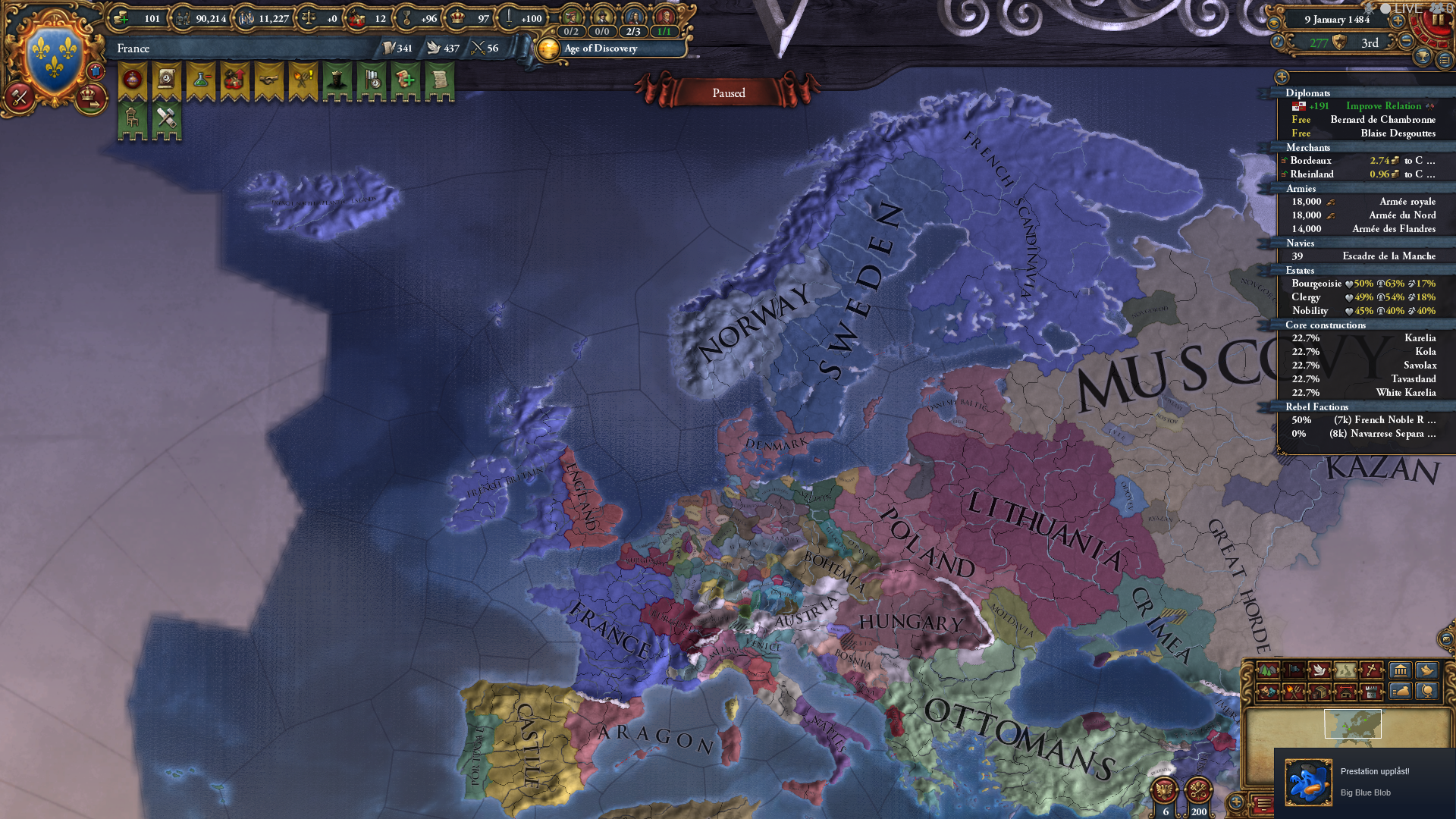 Tested out Big Blue Blob in the new beta patch. Well, that was easy. One small coalition formed on Ireland but I dispanded it quickly. Not even a coalition when eating half of England in one war.
Reactions:

Some notes:
Tlemcen and Wadai are my vassals.
Yemen, Hormuz and Lunda are my allies.
The Ottomans were my allies at first and I even helped them in some wars, but then they went hostile, so I had to deal with them. They went revolutionary and I crushed them, then all their neighbours ganged up on them.
The revolution found a new stronghold though, The Commonwealth went revolutionary and even force vassalised the Ottomans and Mamelukes. It happened around 1811, so it was too late to kick the Commonwealth out of the region.

A rather laid-back 1.31 "For Odin" run, with a few notable features:
Obviously, it's not "finished" (the bordergore is bad in places), but there aren't any AI left who can challenge me, so... 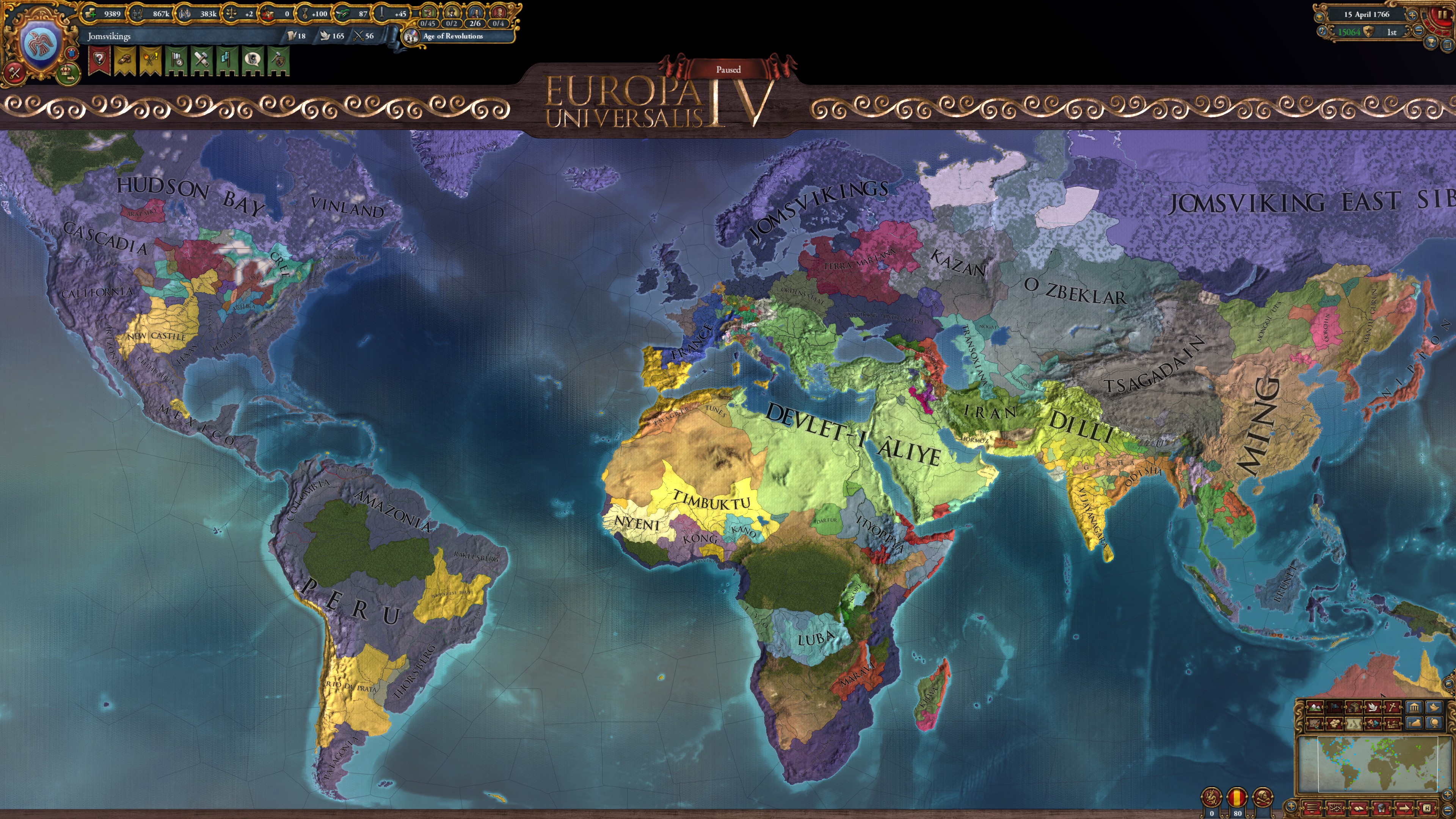 Crimea and KHAAAAAAAN, and nasty Ottomans interfering each of my wars 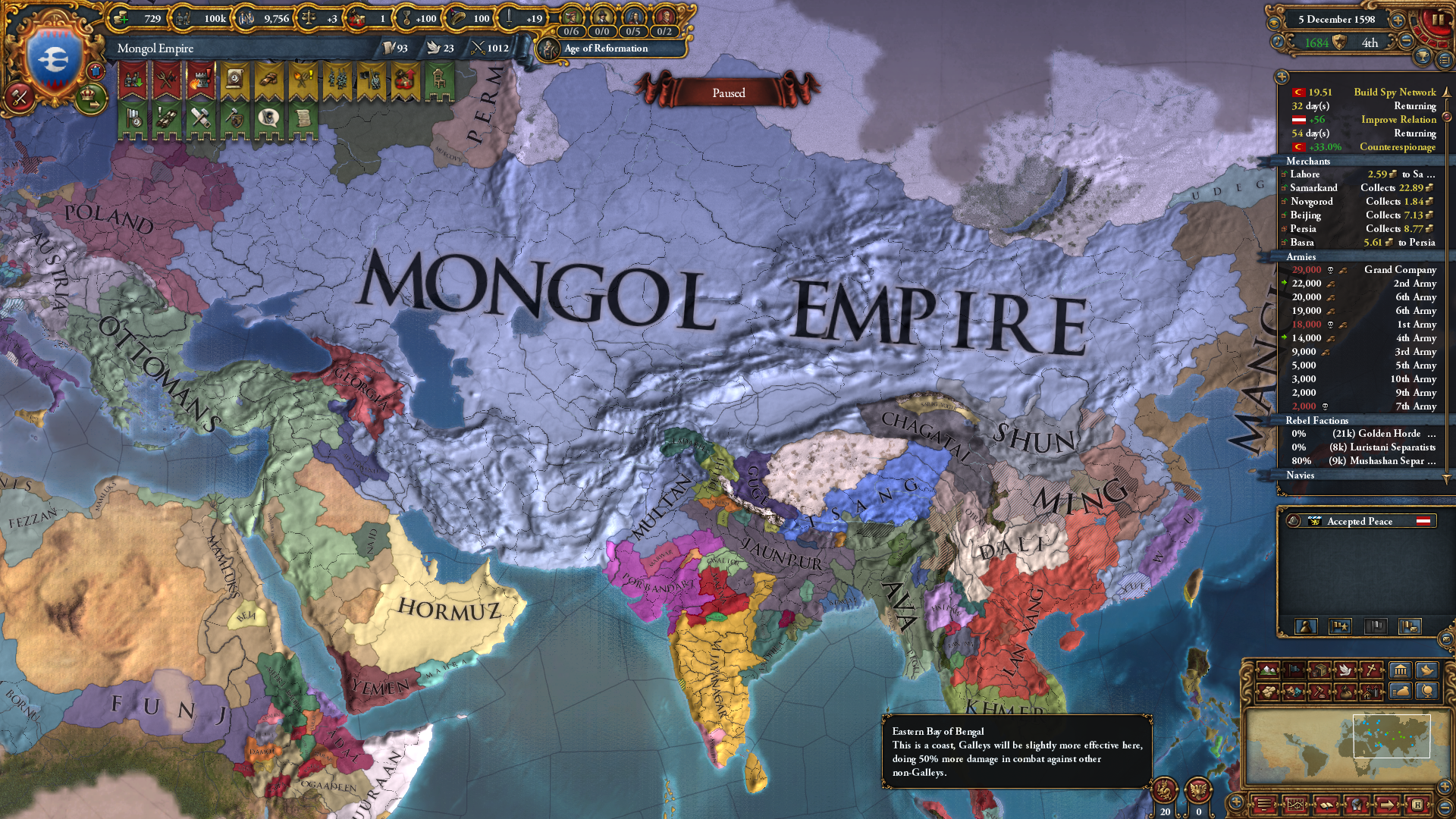 So you switch Judaism, everyone hates you, than you form Israel jus to swap so-so Nubian ideas into so-so Israeli ideas. And +1 legitimacy from tradition is not replaced for any devotion or sth for theocracies

Any updated mission tree? No.

And maybe only a few monuments would work with judaism. Church power actions are nice, but still too little to continue 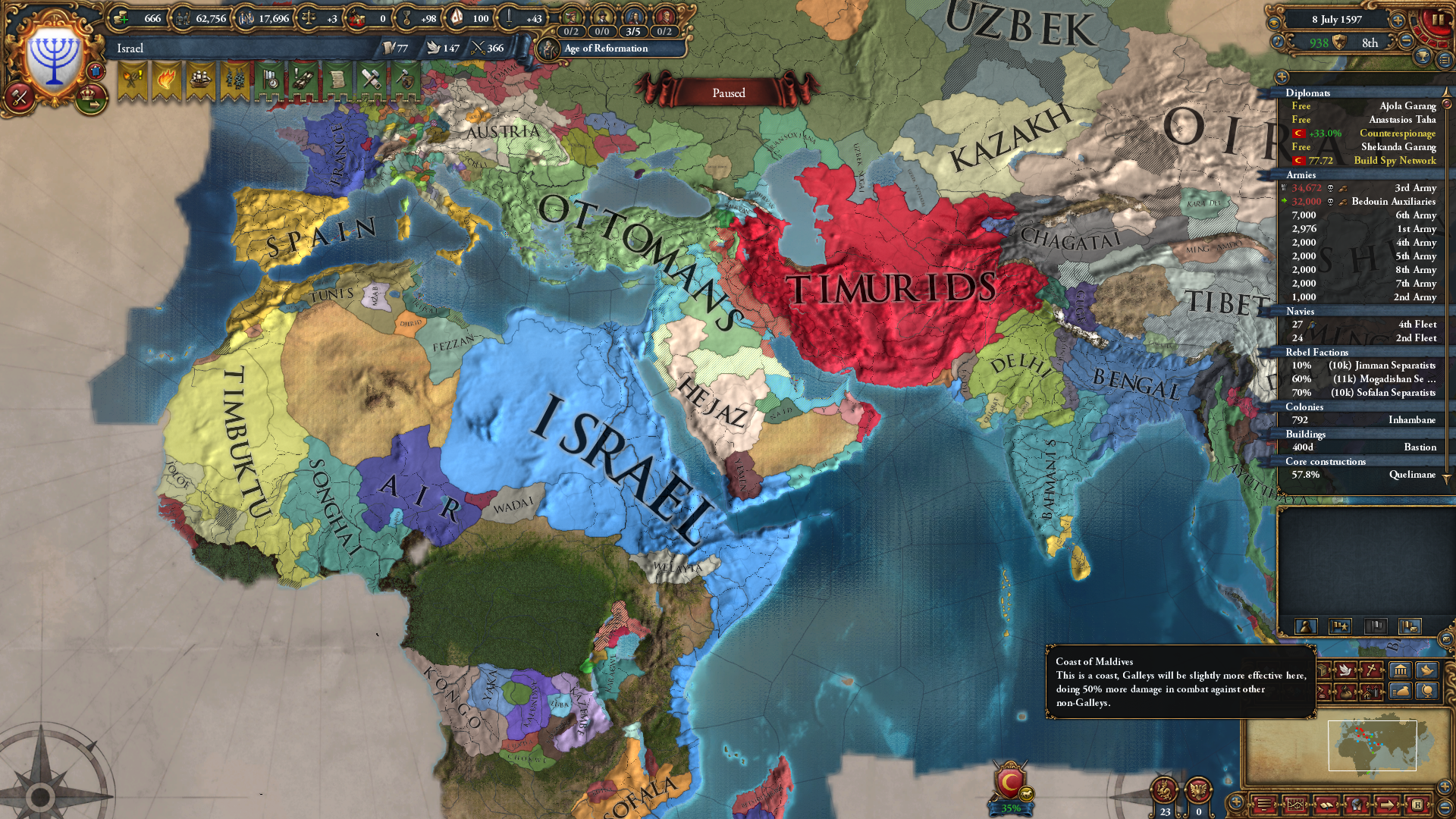 After my Songhai run, I decided that I should try Venice, because I had always wanted to play it and I could build some lovely monuments in Europe.

And an extra picture, as well. Zoroastrianism survived until the end with 2 independent minors, I had never seen that happen before. It managed to survive, because of Yazd. It actually grew pretty big and strong, but then, sadly, got overpowered by Bahmanis and Ajam. Khiva and Afghanistan are just what's left of the great Yazd.
Also, there's a huge Nivkh Empire in the east, they took all the Siberian territories from Russia.

10 PUs achievement, pretty annoying, every time I was close, leader died and ingerited sth like Lorraine, Holland, Flanders, Champaigne etc. Finally after dead of previous Byz leader, I got the 10th union.

So from initial unions Brabant is still there, then comes enforcing PU on Castile and their PUs of Aragon, Portugal and Naples.
Remaining 5: Berg, Bavaria - with a threat to be inherited, Russia annd Hercegovina (all enforced recently), Byzantine peaceful.

No disenheiriting to get Habsburgs or sth - all with initial dynasty

I hoped for restorations from Burgundian incident, but I don't know which options to follow And Austria invited with me the 2nd option.

So time to revoke . Everything except british and Sweden and Gascony in empire 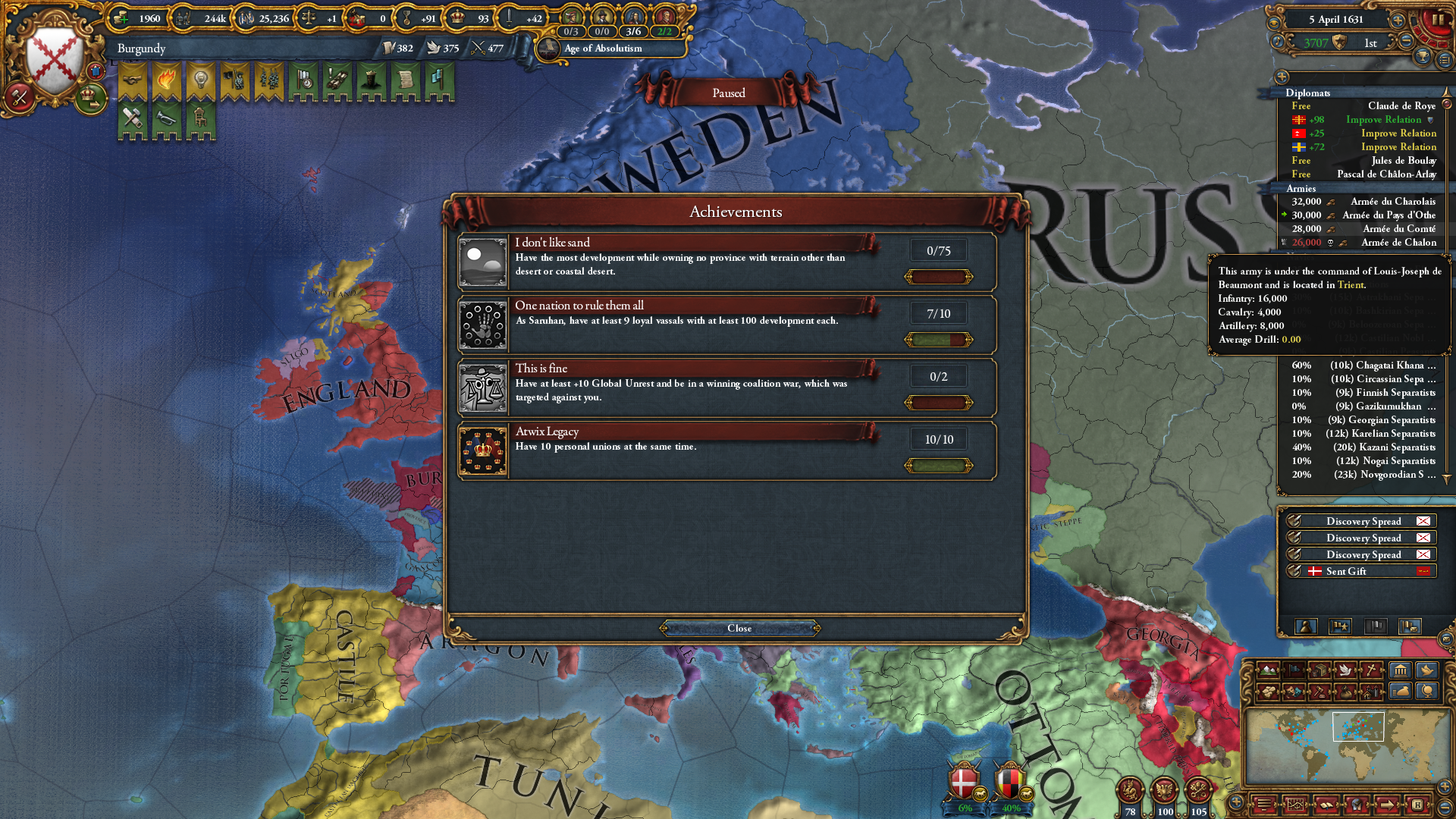 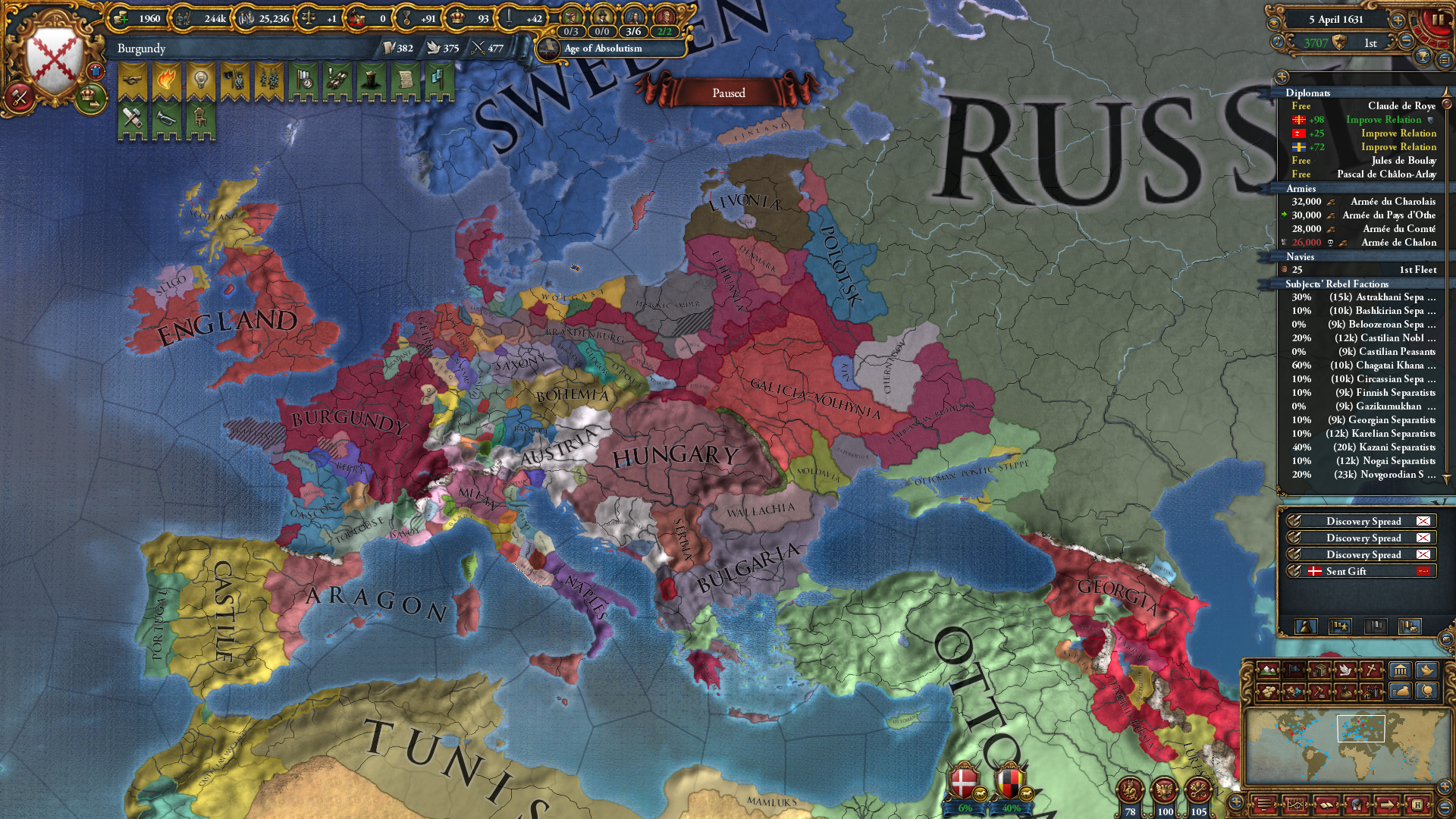 Forming France as Burgundy is like forming the Ottomans with Byzantines; heresy. Lotharingia.
Reactions: 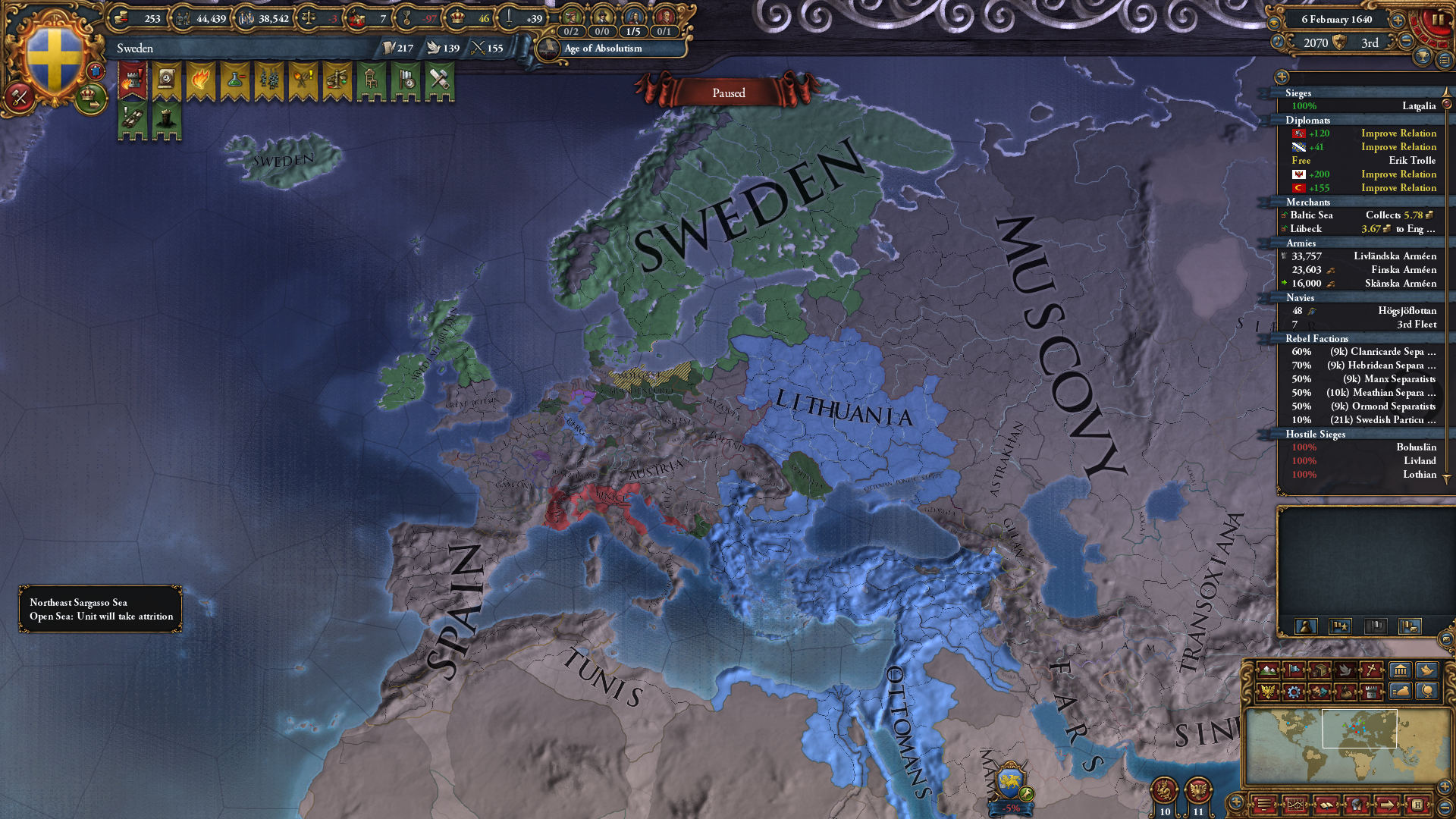 This is my Sweden at its peak. The downfall is inevitable.

For some reason I started losing too much money on a monthly basis, eventually I went banrkupt, I have been fighting rebels for 150 years despite accepting cultures, coring provinces and making states.

I decided to switch to Protestant which didn't help that much, but it stalled the economic downfall a bit. I was just about to attack GB to get more English Channel provinces but I got bankrupt 3 weeks before my truce expired...

Now I'm chasing rebels with a low morale army until I fully collapse.

On a side note, there's no France. It comes and goes actually. And Tyrone used to control most of Ireland and Scotland until I destroyed them, now they found refuge in Surinam! 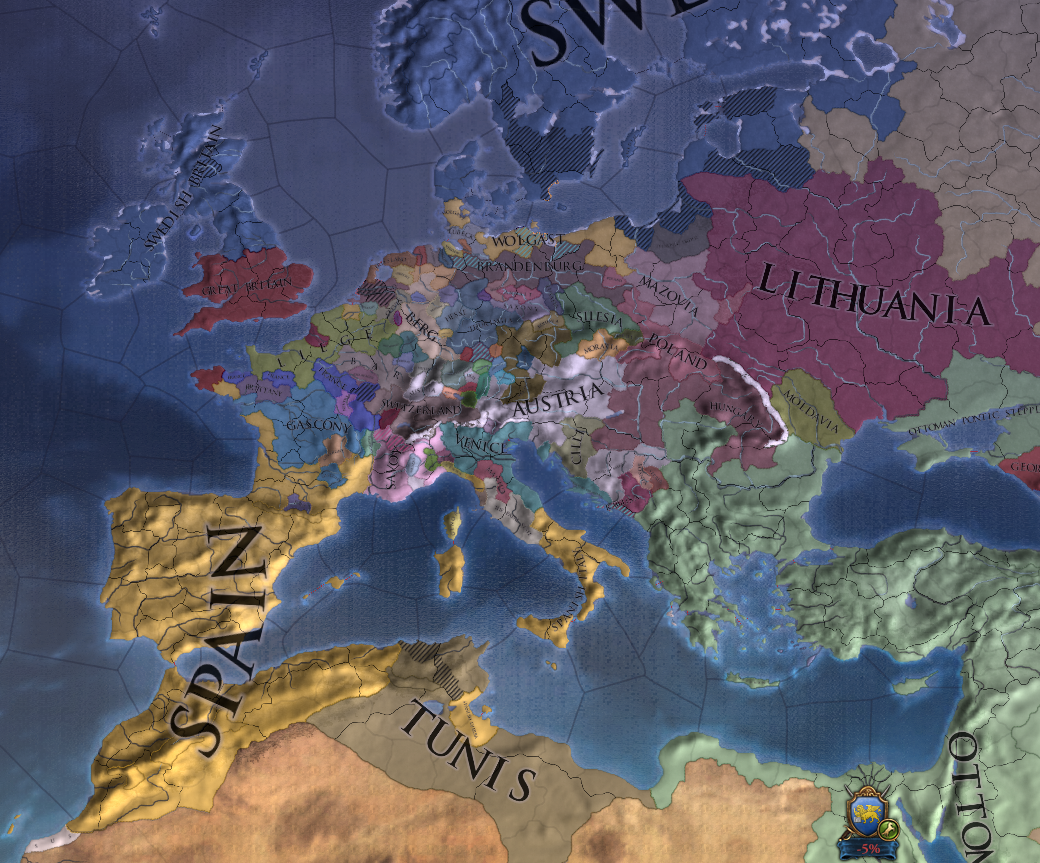 Now I'm chasing rebels with a low morale army until I fully collapse.
Click to expand...

So you haven't played Mali yet in Origins, have you?

enKage said:
So you haven't played Mali yet in Origins, have you?
Click to expand... 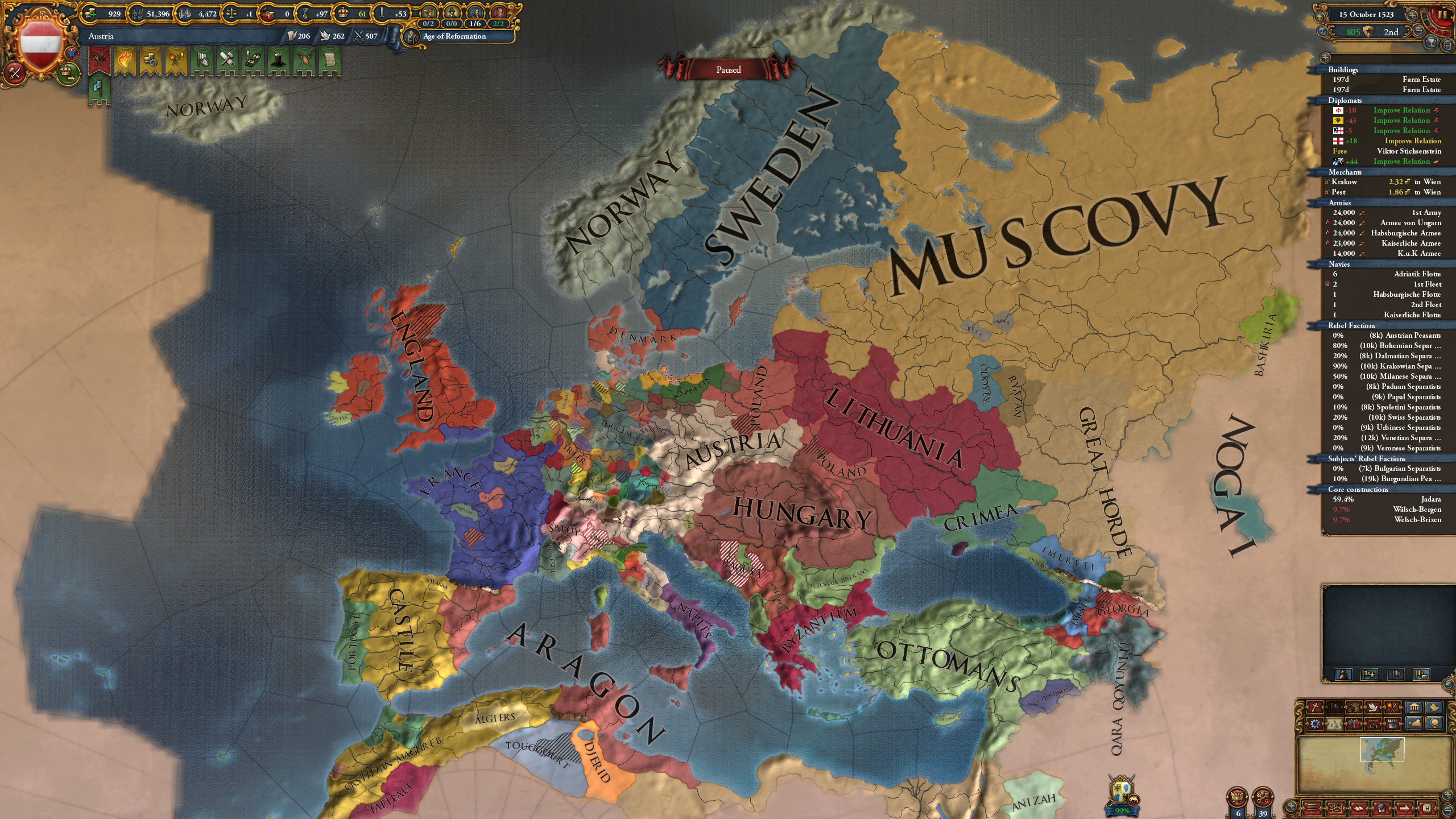 Austria, 1523. I have PUs over Hungary and Burgundy, already inherited Bohemia, and am planning to go after Poland/Commonwealth in a bit. Sweden, Norway, Serbia and Byzantium are my vassals. Allies are England (ruler is 40-ish with no heir, I'm his only ally/RM) and Castile (PUs over Aragon, Naples and Portugal, with a Habsburg on the throne). Currently busy wiping out CoRs. Feels like a pretty good start...
Reactions:
E

So finally I have more dev than Ottomans! 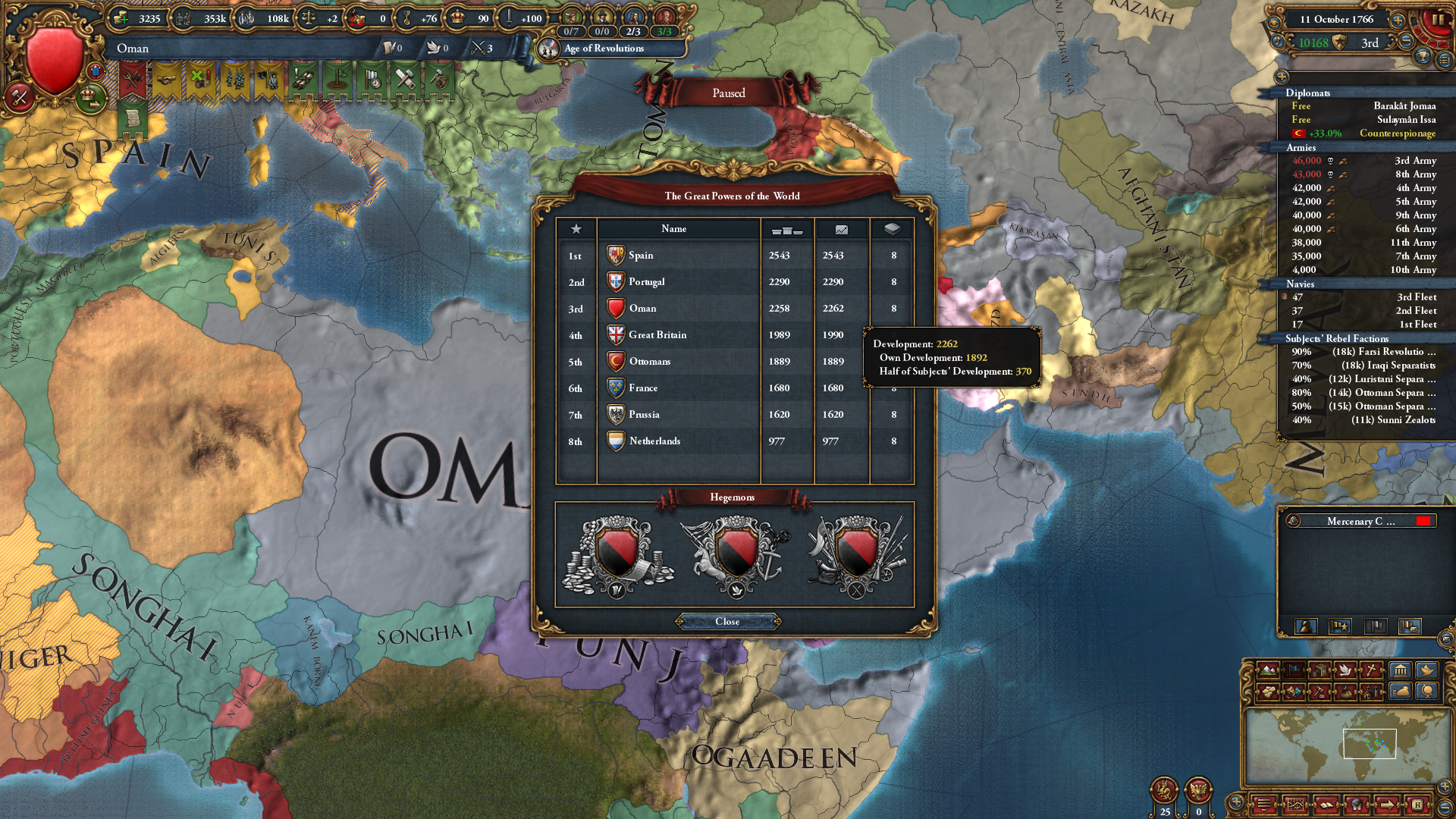 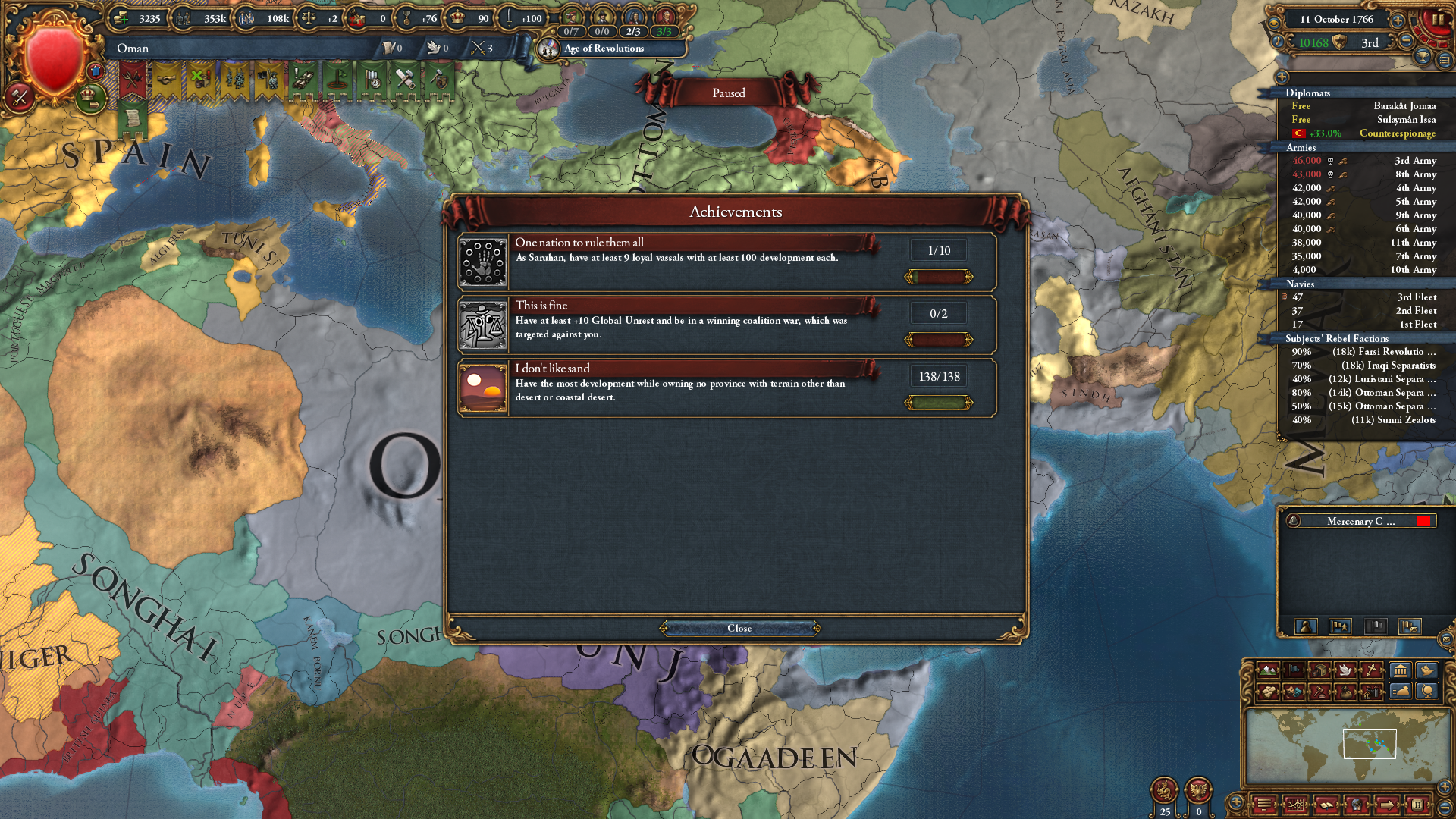 So this is my very sandy empire, with Fars, Arabia, Mikhlaf and Hormuz as vassals 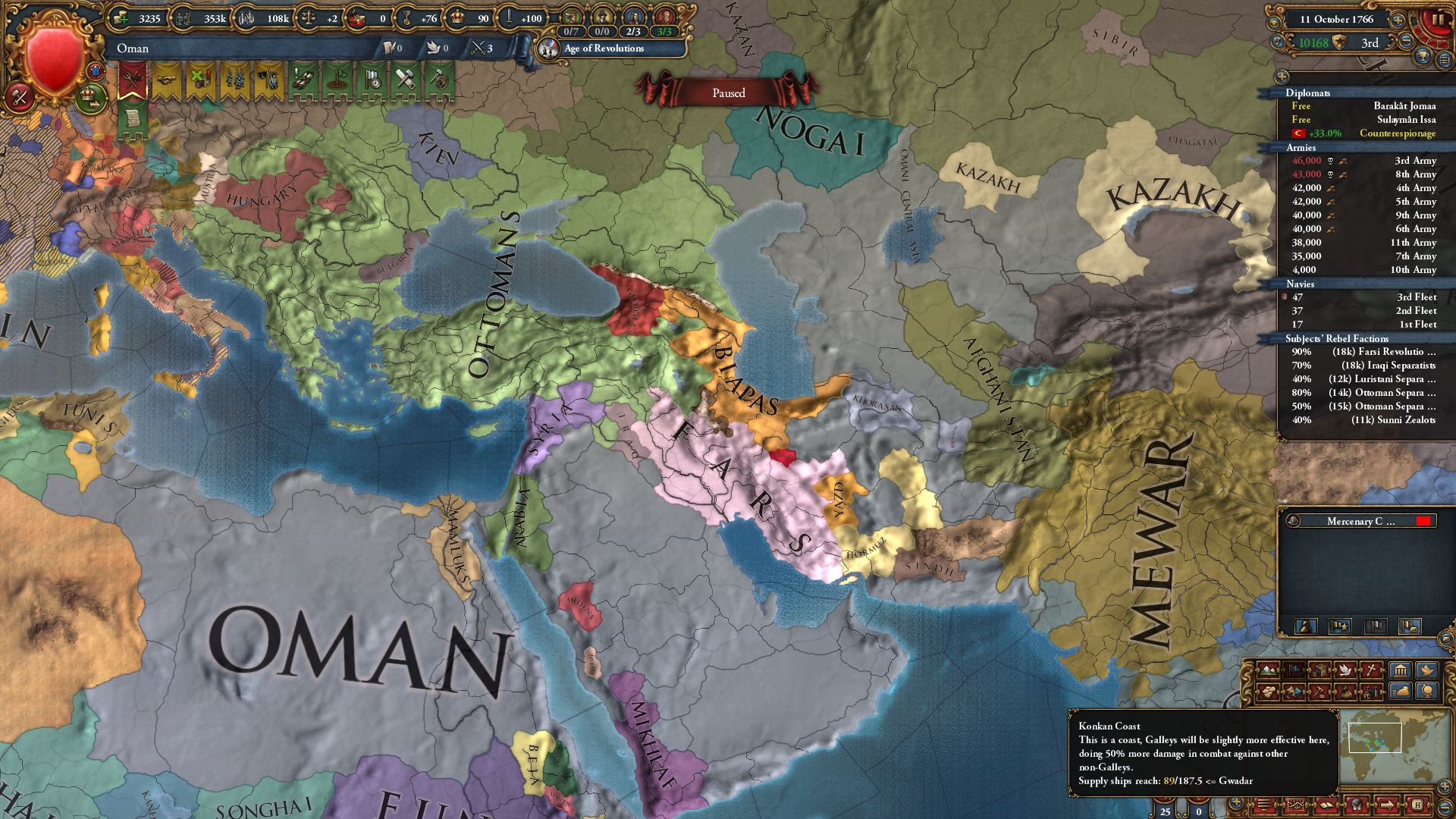 Developing desert provinces is fun.
Most of Arabian peninsula is 30+ dev 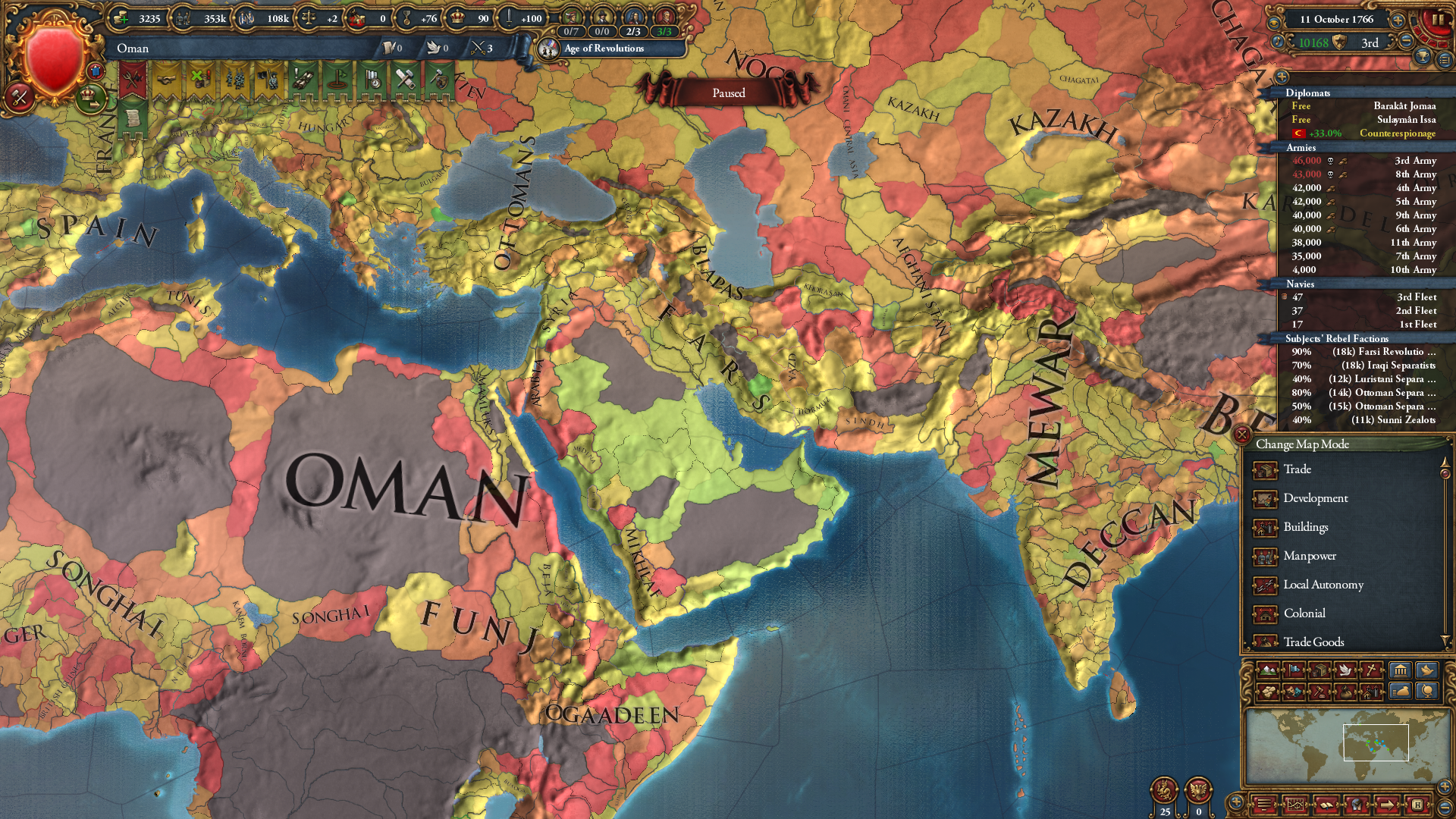 Of course I went Oman even though it has no dev reduction in ideas, but it has this lovely feudal theocracy with magical -20%. Hormuz vassalised for Maliki school of Islam, so for the price of about 350 adm and 50 diplomana I was able to cheaply develop even interior provinces to 30+.

Actually I was close pre 1600, missing sth like 80 dev to Ottos, but then Ottos went really really mad expanding to even 2400 dev at peak. Ausria, Hungary, Venice, half of italy completely removed

So I was forced to war war war. Mine 250k vs Ottos 600k and noone even was eager to help, as my forever ally Mewar didn't want to due to distance.
And Omani ideas are very "warfriendly". I don't remember being stackwiped so often

First very suicidal war - taken one province, no manpower.
Second - white peace, no mapower
Third - Spain finally agreed to ally, joined, but never did anything. White peace
At least at that moment Ottos was finally at 0% professionalism with 100+ merc.

And then I was finally able to ally someone from the north, who already lost most of Polish provinces to Ottoblob and did not like Otomans any more. He had quality, I had numbers, together (and later also Mewar) we made 5 wars of releasing nations, returning cores and so on. 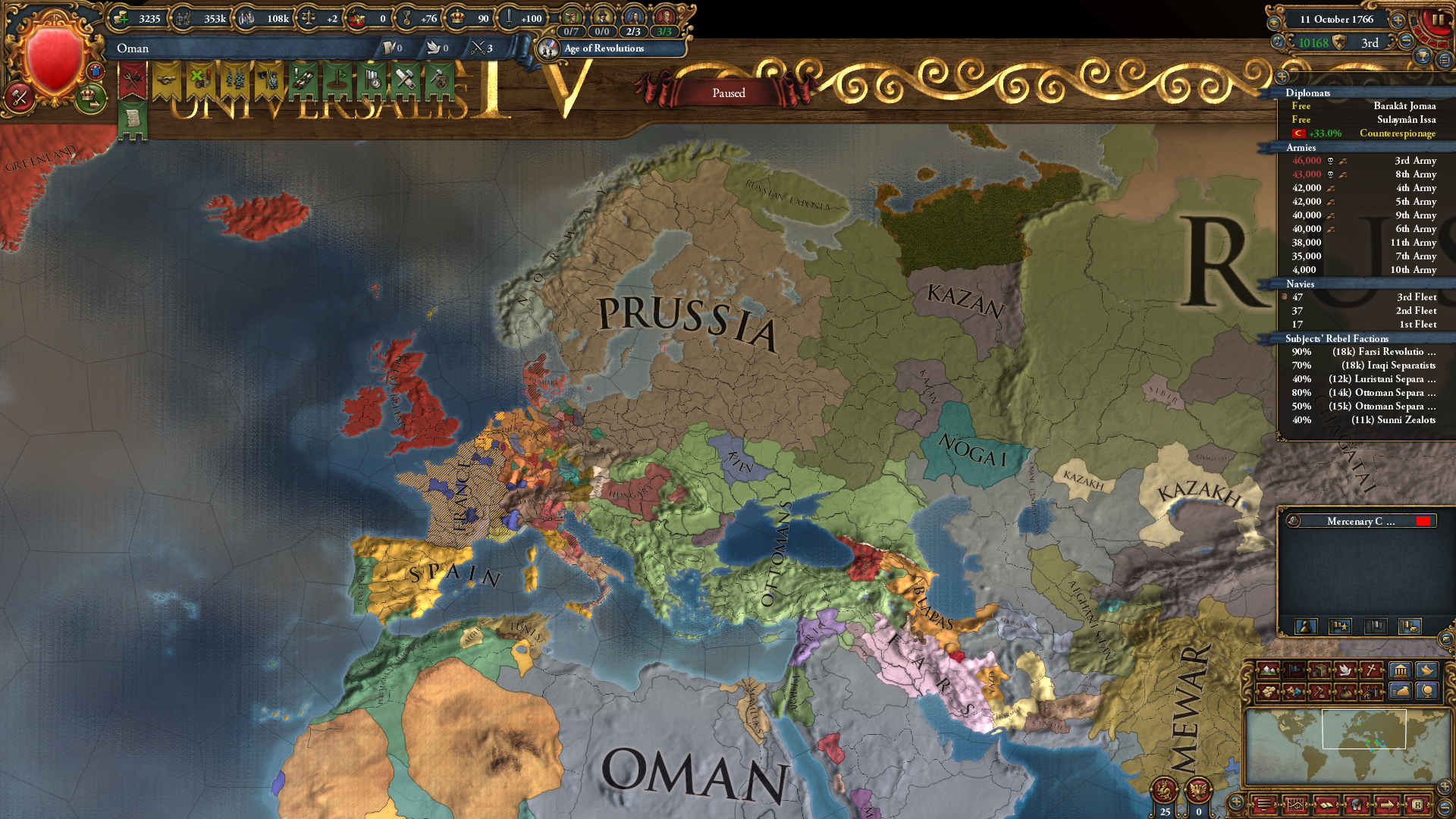 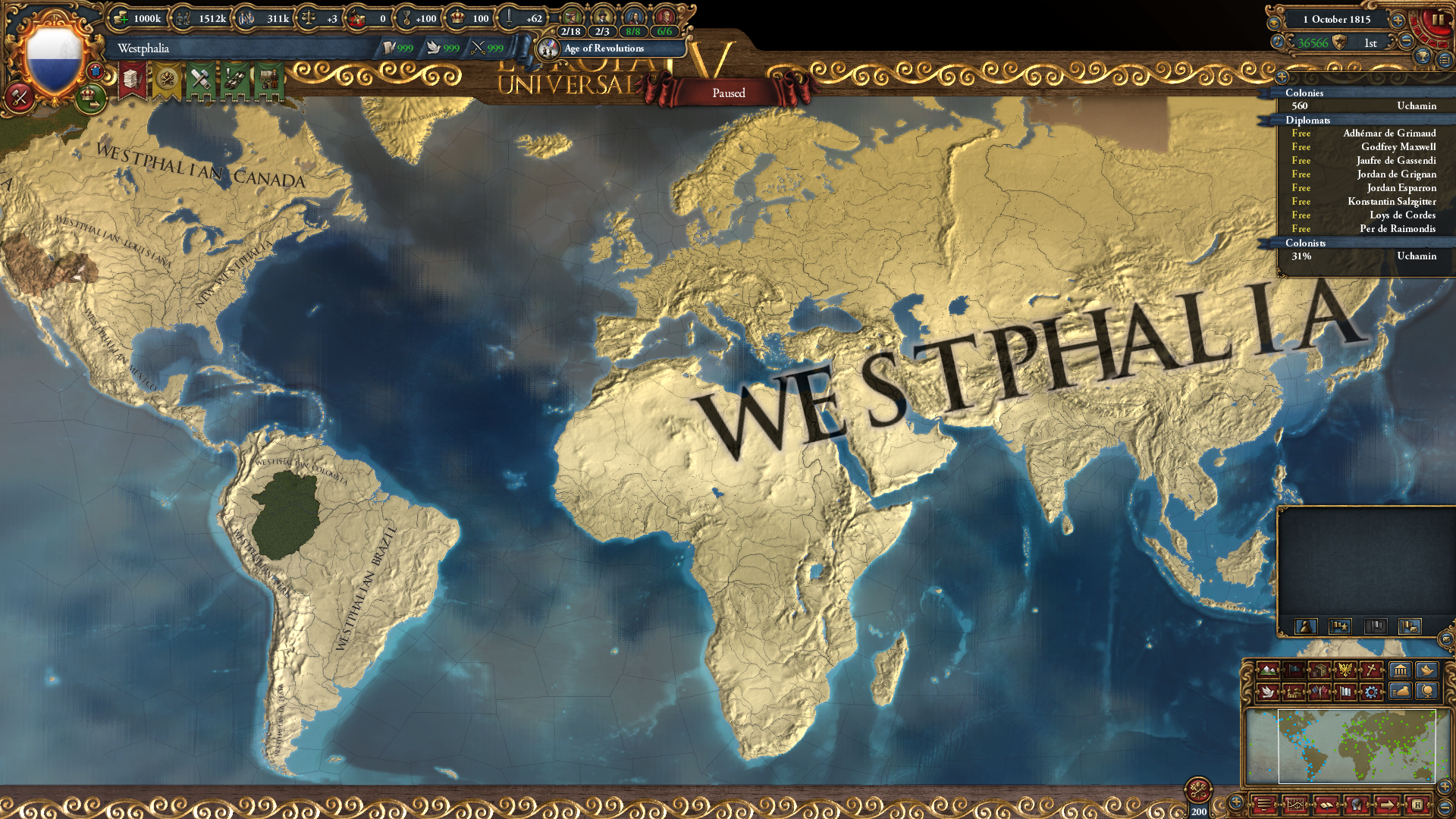 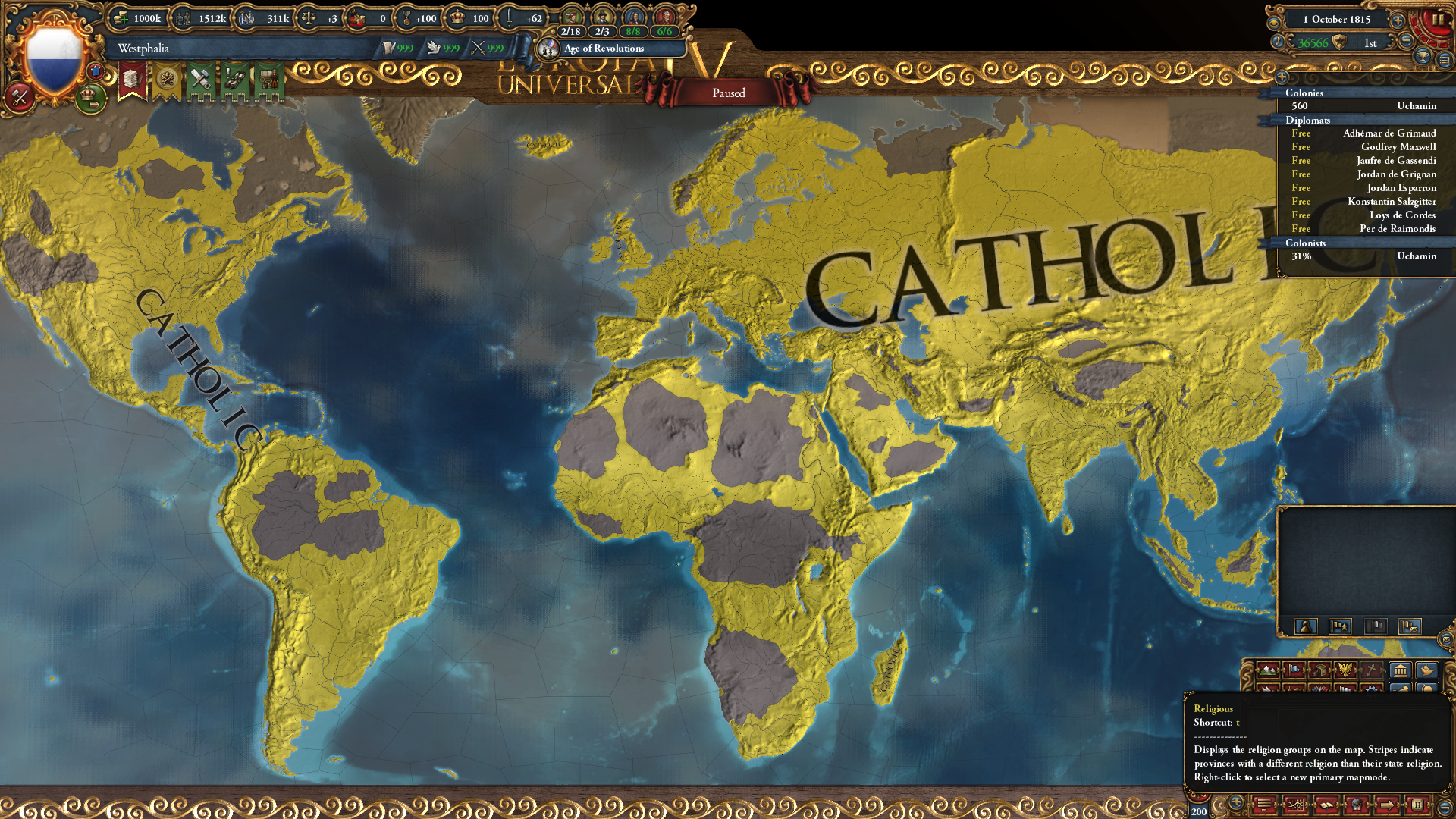 This, initially it was just a Good King Rene achievement run but then I realized PUs missions are op and so were Jerusalem ideas, so I thought it was my chance to try one faith.

I went Provence > Jerusalem > France > Westphalia. Actually I'm pretty noob at tag switching so I messed up a few things and ended up losing too much admin (initially I wented to switch Mughals or Yuan but didn't know the requirements well enough) so I wanted to form Germany, but due to my lack of admin I had to feed pretty big vassals in german region and I couldn't integrate them all until way later in the game, when I didn't need german admin efficiency anymore, so I stayed as Westphalia until the end (with Jerusalem ideas) for extra swag points
Reactions:

I had fun with the Saruhan achievement, here is what my empire looks like (not the most pretty one but it is fine). I milked the favors for Mamluks territory, basically getting Syria for free. I sniped Moscow to prevent Russia, and dev Karamanie like crazy. Also there's so many monuments I didn't know which one to upgrade. 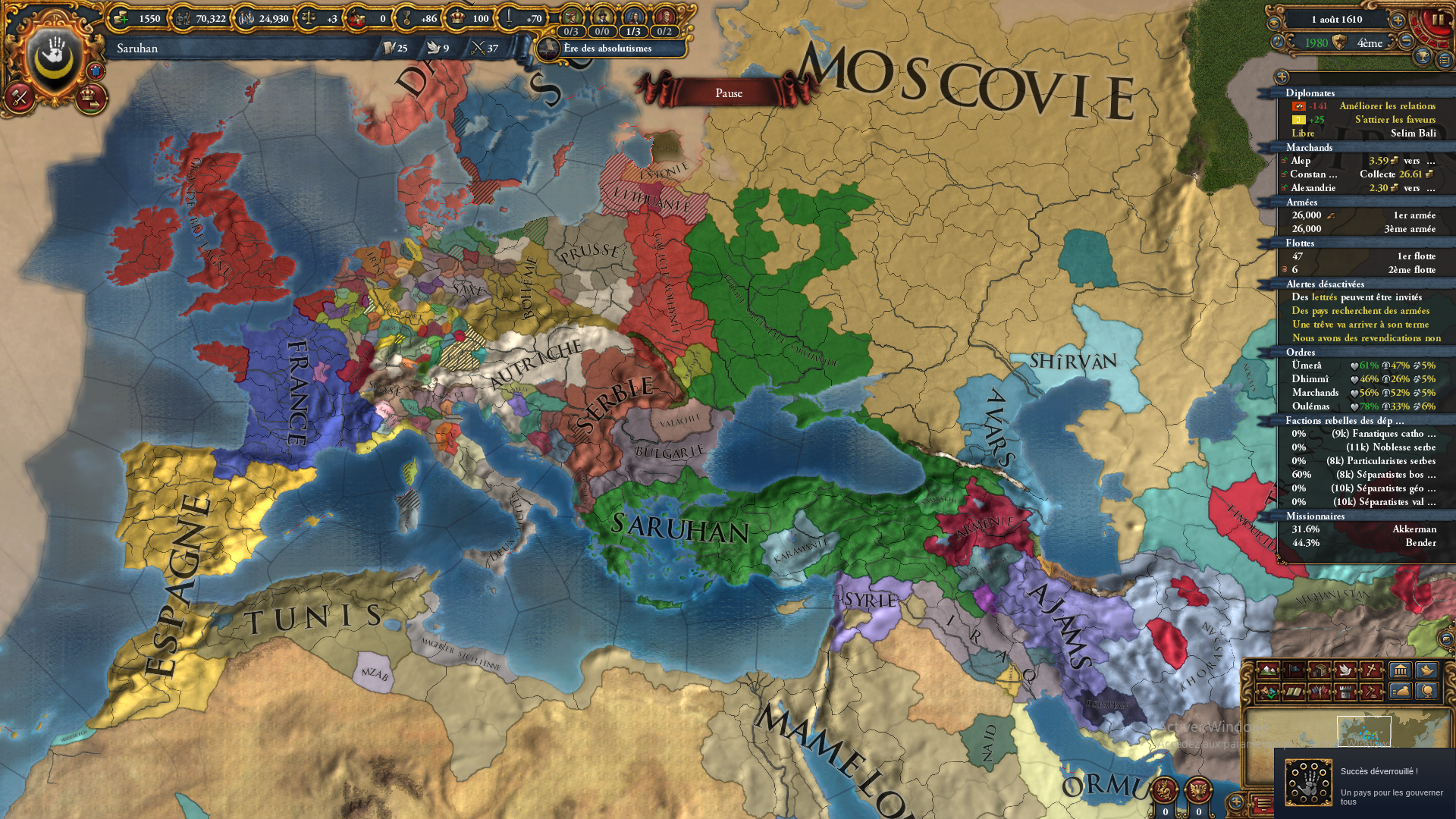 Leader of the Senate