Jump to latest Follow Reply
Menu
Install the app
You are using an out of date browser. It may not display this or other websites correctly.
You should upgrade or use an alternative browser.
Europa Universalis IV 78434 EUIV: Suggestions 17412 EUIV: Technical Support 6264 EUIV: FAQ & Strategy Guides 211 EUIV: AAR's, Let's Plays, and Fan Fiction EU IV: Alternate History Short Story Contest Contr 28
Show only dev responses

Well done. Only thing that would have made it better would have been the lack of snaking up to the Armenian holy sites.

It would have been more satisfying and aesthetic to have put a restored Armenia as a vassal up there.
Toggle signature
Mankind is unlovable.

My run as Trebizond, first time I play a country so defensively and diplomatically
Nothing weird for the most part except for a very early PU on Portugal from England

Currently on an Exodus going home...

Allied to France, the Ottomans AND Russia? Quite impressive, I'd imagine rivalries would be a pain to uphold those alliances but guess not.
Toggle signature
Currently back to writing my 4th EU4 AAR after a long hiatus:

Take a look at my Inkwell for my other AARs I made.
K 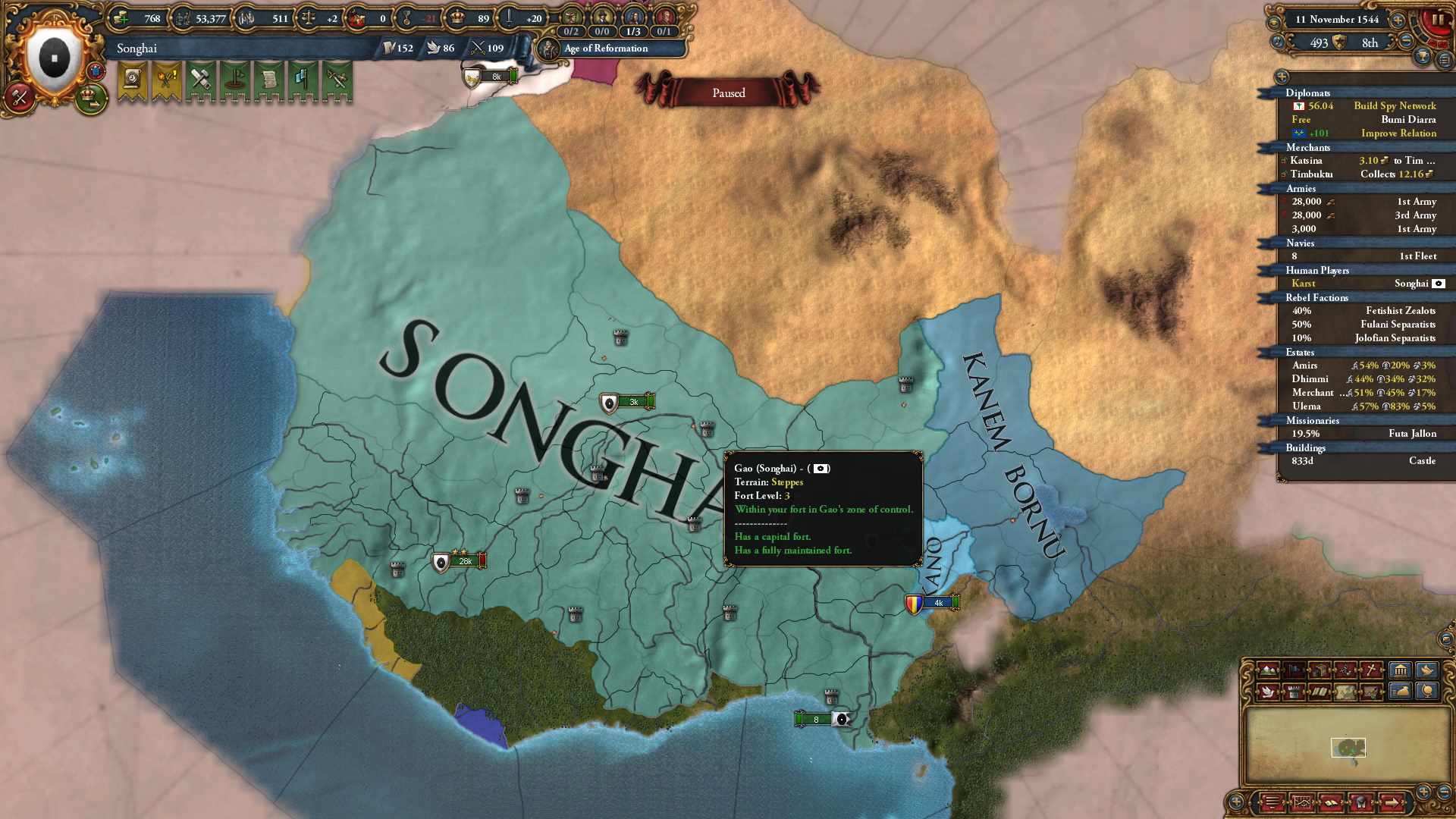 I realize Songhai is a pretty easy start, but this was a damn good century.
Europeans are starting to arrive in West Africa, just as I am finishing consolidating the region. I'm the sixth greatest power, all institutions embraced, 10/10/12 tech. 7/7 Quantity, 4/7 Innovative, 1/7 Quality - I had insanely mil-focused rulers.
I've done a pretty unspectacular run of conquering and vassal feeding. I didn't remember this being possible, but you can apparently fullannex+release Mossi in one war, which is pretty cool.
Here's something funny: Those two yellow provinces are not both Castille. One is Scotland.
I can't see very many nations at all, but economically I'm pretty confident. 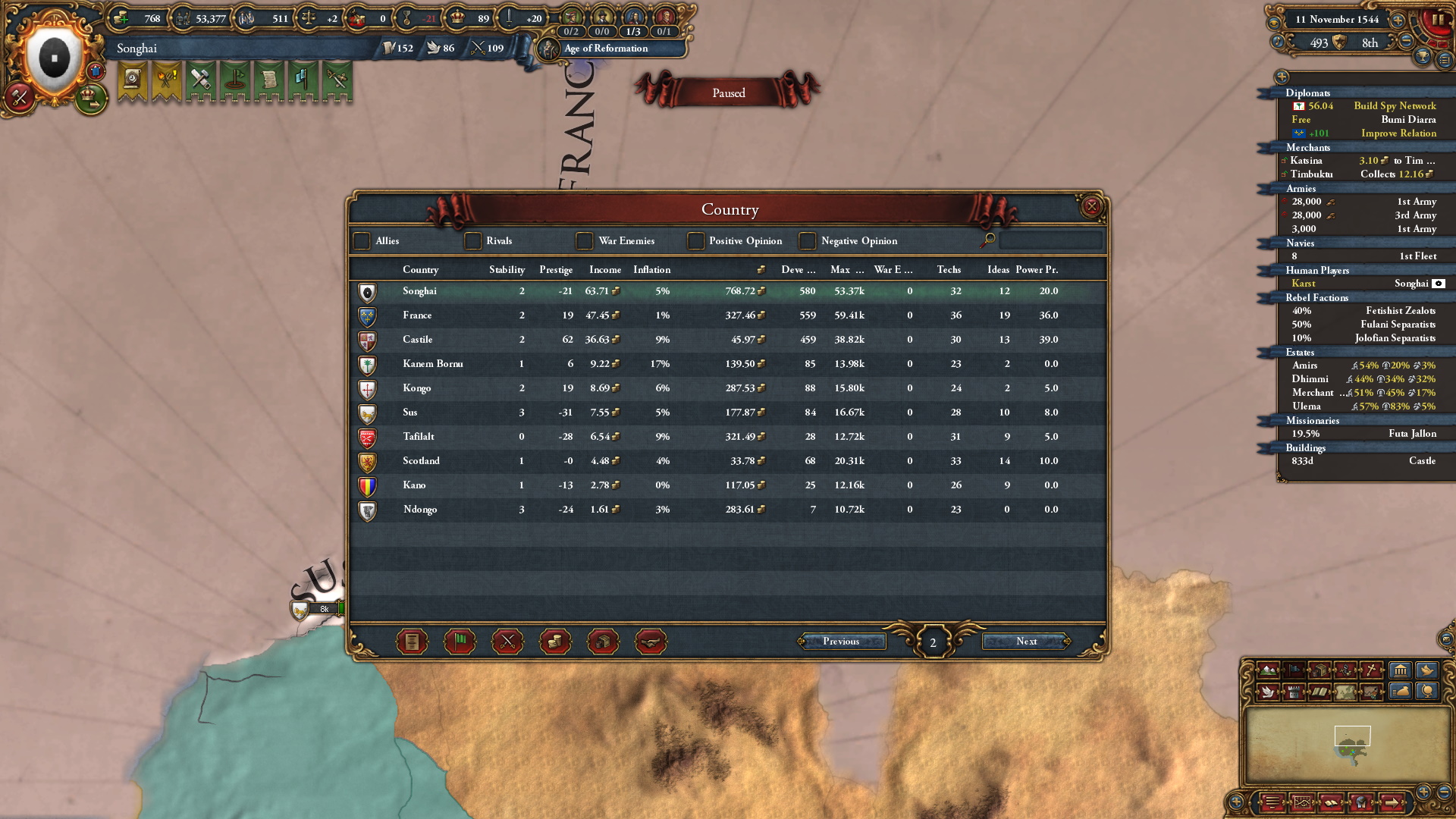 Now this is without a single point of development in the gold mines....I didn't even prioritize capturing them, which is also why I have inflation under control. Instead I developed Renaissance in Timbuktu and Colonialism in Katsina. Both are Cloth+CoT, so about as good as you'll get in West Africa. Honestly focusing on other income and getting gold as a 'bonus' in this sort of region is so much better. 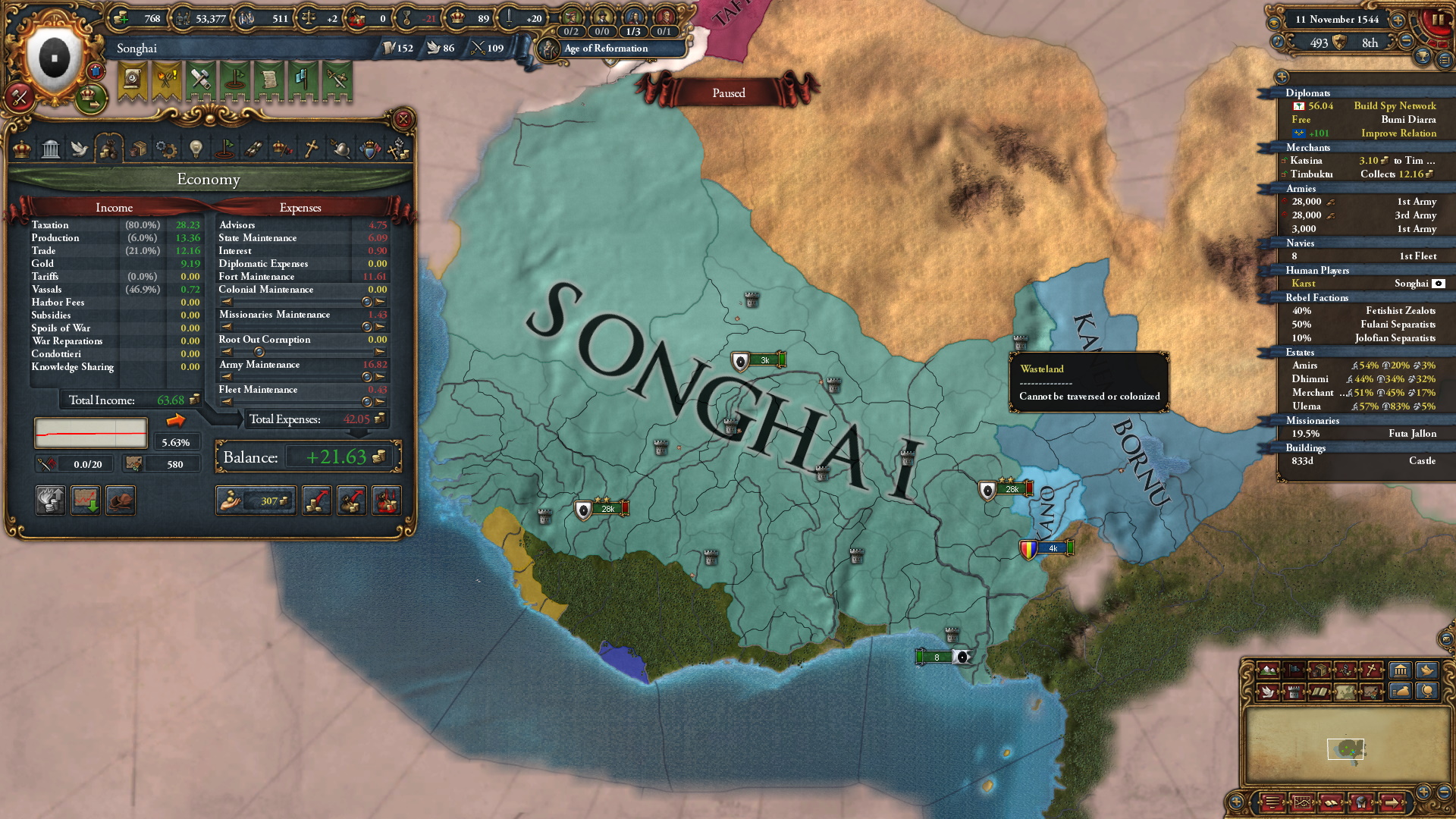 Really happy with that. I've been able to afford three manufactories and eleven forts with no issues.

I'll probably post again later in the campaign but I wanted to show off this great start.

Kandy, Prome and Kalaymyo as marches because didn't want to expand outside of India (except when I had to grab that juicy montain province for building forts). Europe was weird because GB integrated his PU, Castile, while Utrecht ate Denmark and all of Mali. 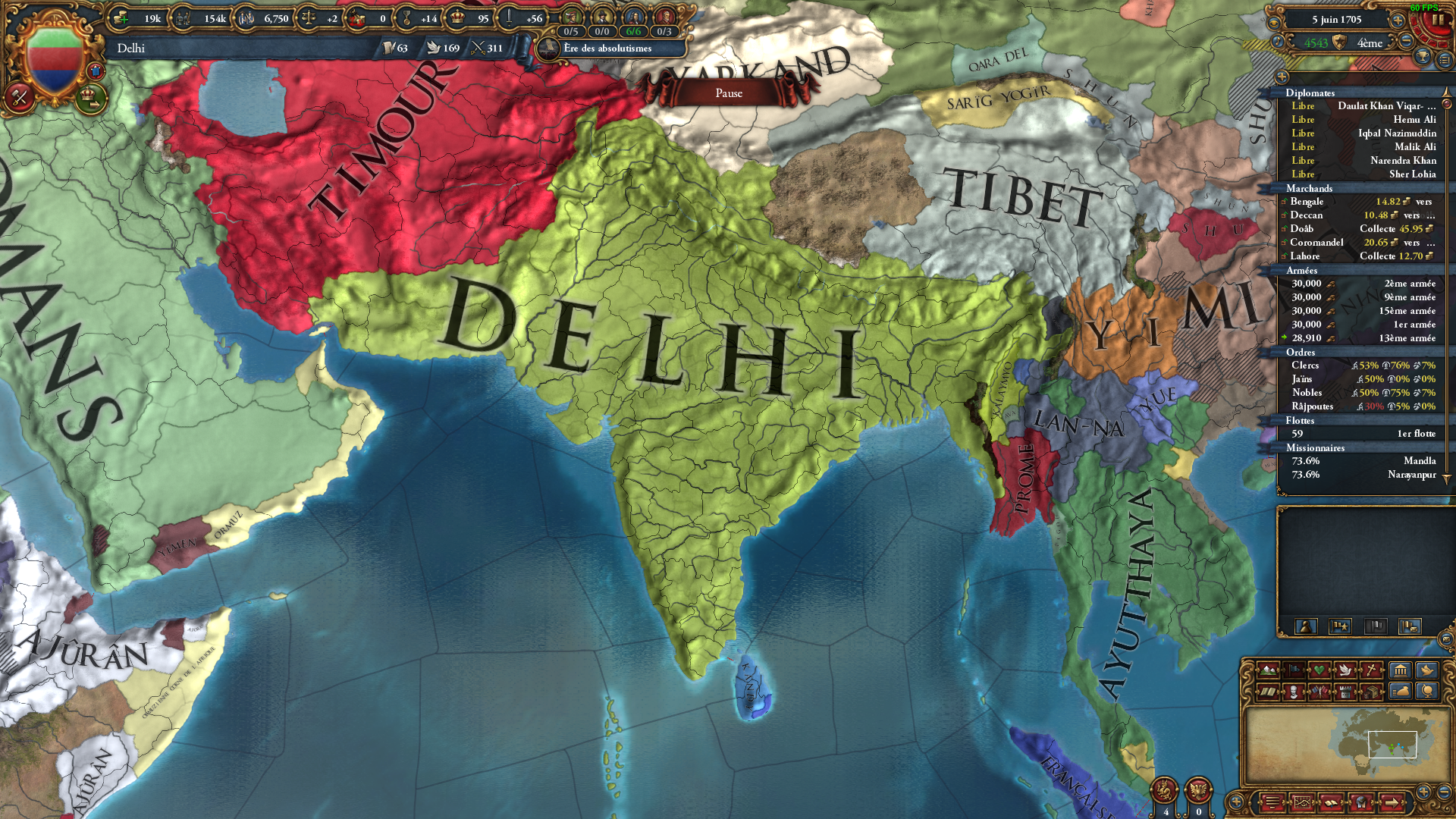 Toggle signature
Making Vlad "Dracula" Tepes proud since 1444 : Wallachia can into Europe
A

once I had Black Dynasty ruled Poland .

After quitting EU IV for a long time, I have come back to hunt down some achievements
Since 'It's all Greek to me' came out , I had my eyes on it and so here it is!

It was a harsh time against the Ottomans, Mamluks and the Turkic tribes but I managed to get them all separate. At some point a coalition in Europe attacked me during my campaigns in minor Asia. The coalition was made up of Austria, Hungary and some German duchies. I offered peace asap to win the other wars, which were far more important for my future economy. After I won in minor Asia, I quickly ran over European countries by allying strong countries like Milan, Commonwealth and Aragon. Later I ditched CW for Muscovy/Russia.

The Greek Empire under the Kurtikainos Dynasty 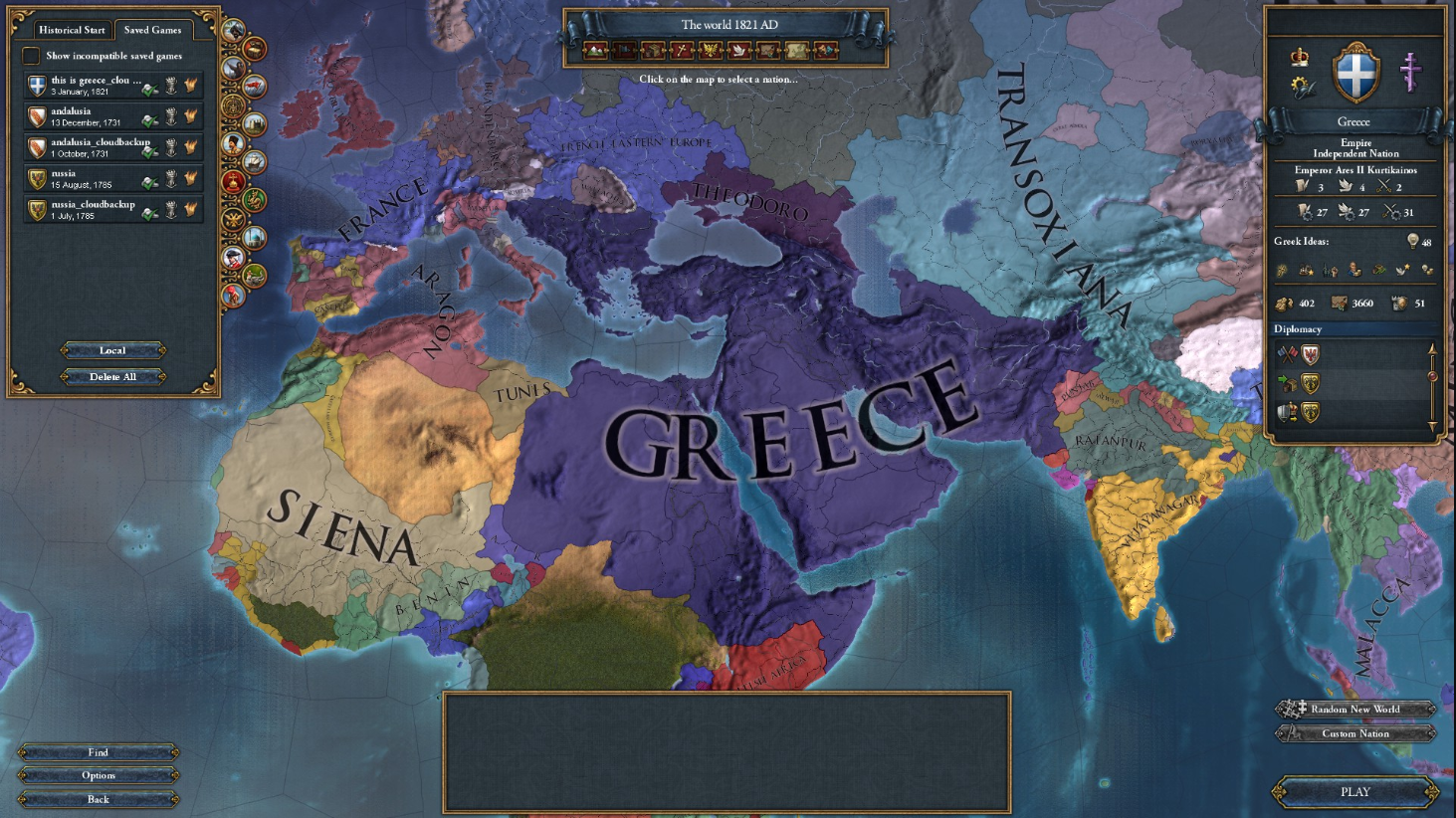 The Greek Orthodox Church at its highest peak 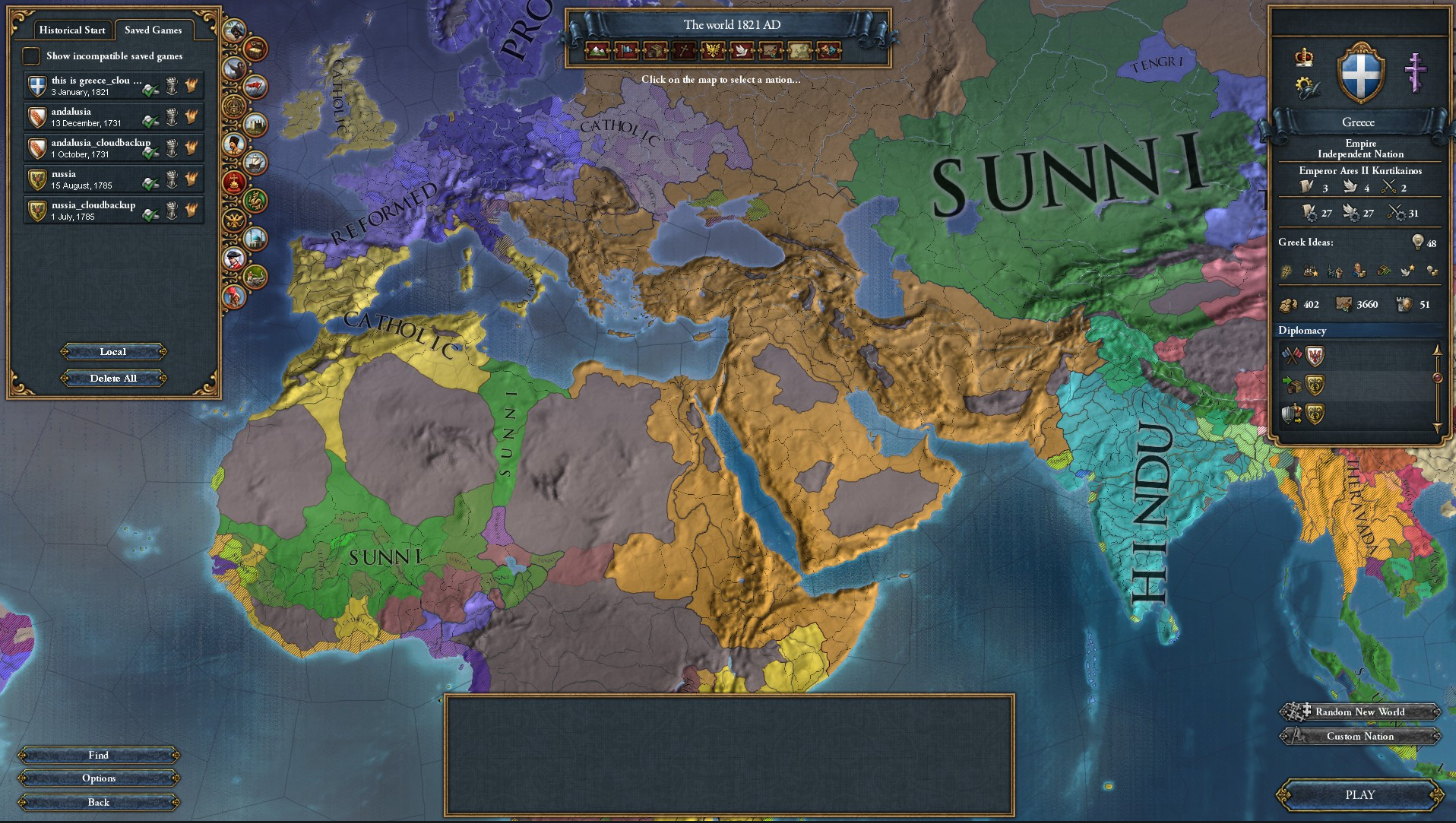 After I got the Balkans/Anatolia, I was basically Ottomans 2.0 so it wasn't really hard to expand. From then on, it was very relaxing but I put more pressure into campaigning after realizing how much I had to conquer to manage Alexanders borders from a couple of centuries earlier. Also, I had to expand to East Africa to get one of the uncolonized provinces for the achievement. 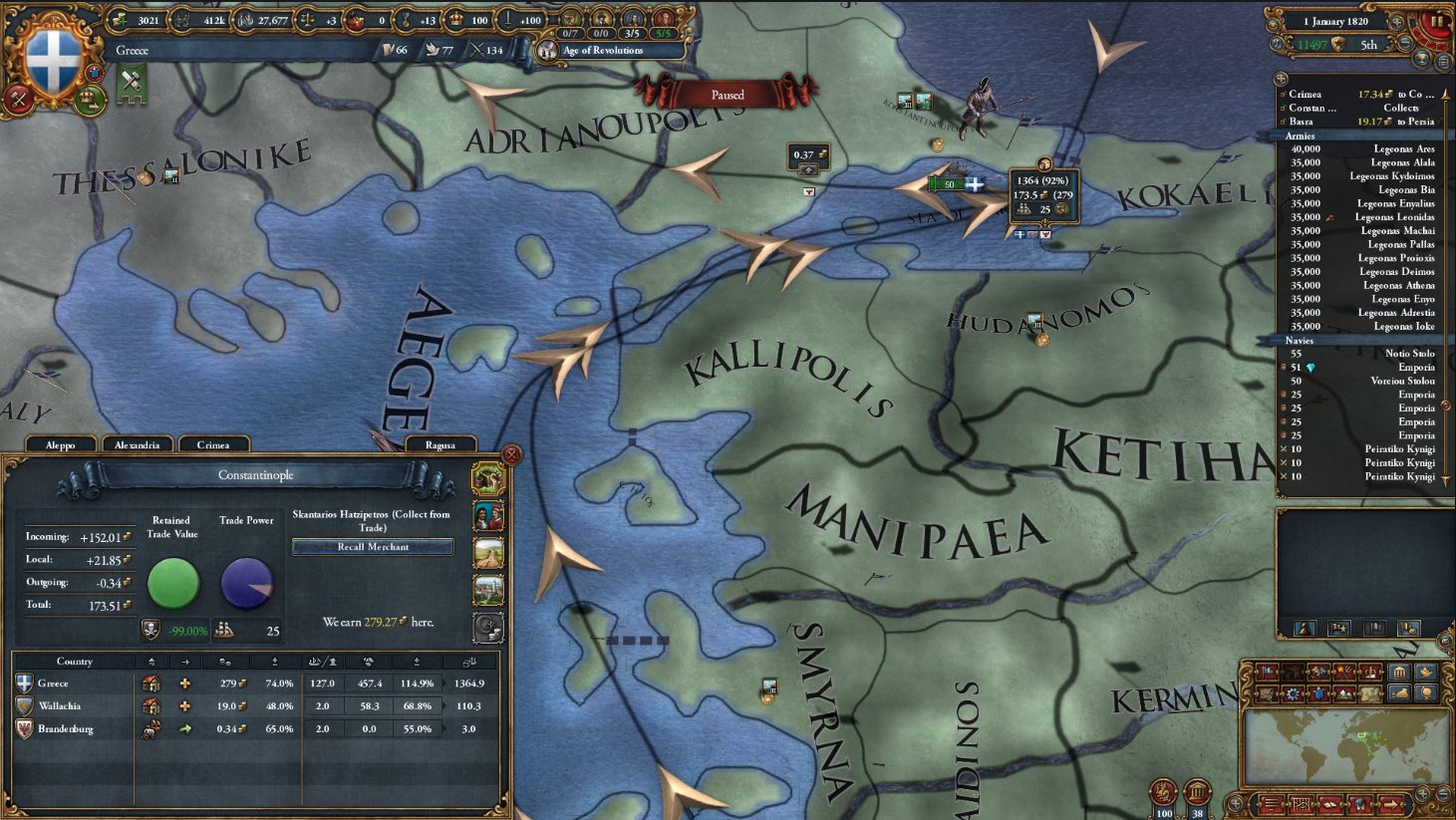 I gathered the trade in the Constantinople trade node and that was basically my economy for the first two centuries. Later I build tons of factories and production centers which made my income sources more diverse. 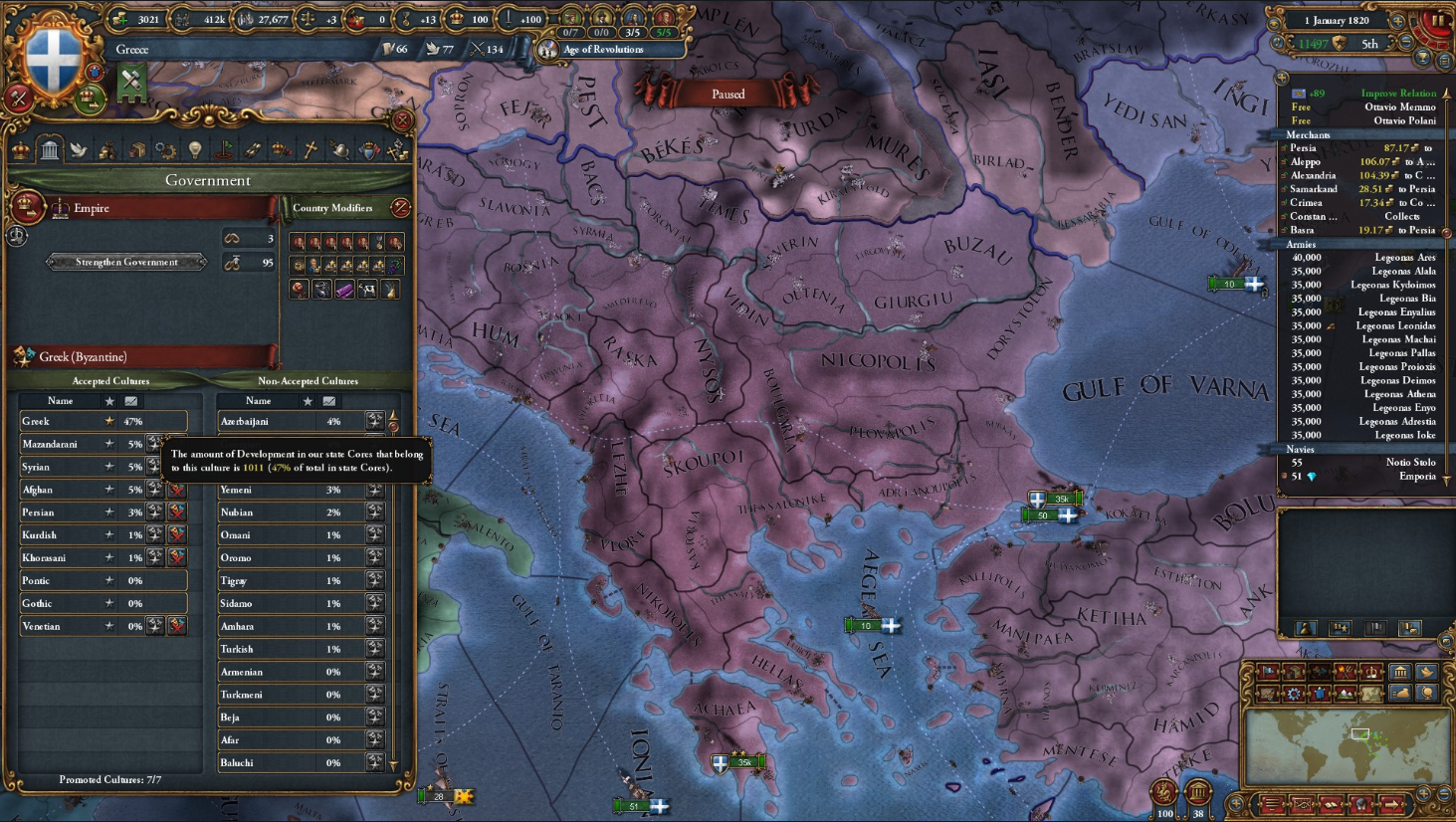 And of course, a Greek campaign without anáktisi is not a Greek campaign at all. So I spend a lot of my diplo power into culture conversions. This really benefited me after conquering tons of lands in the east. Rebellions weren't really an issue at some point, even when I went above my AE limit. 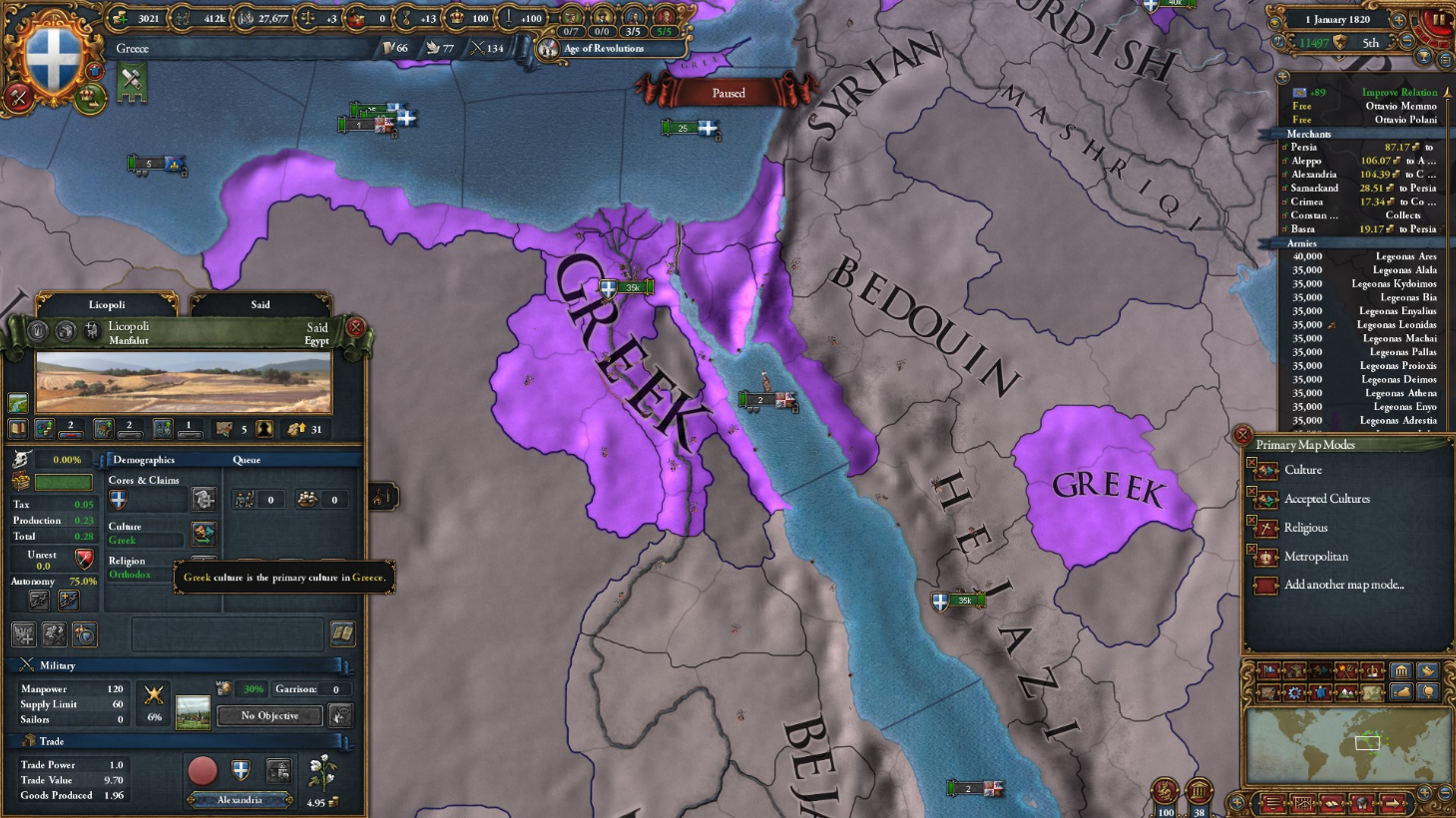 Greek colonists in the Arab peninsula 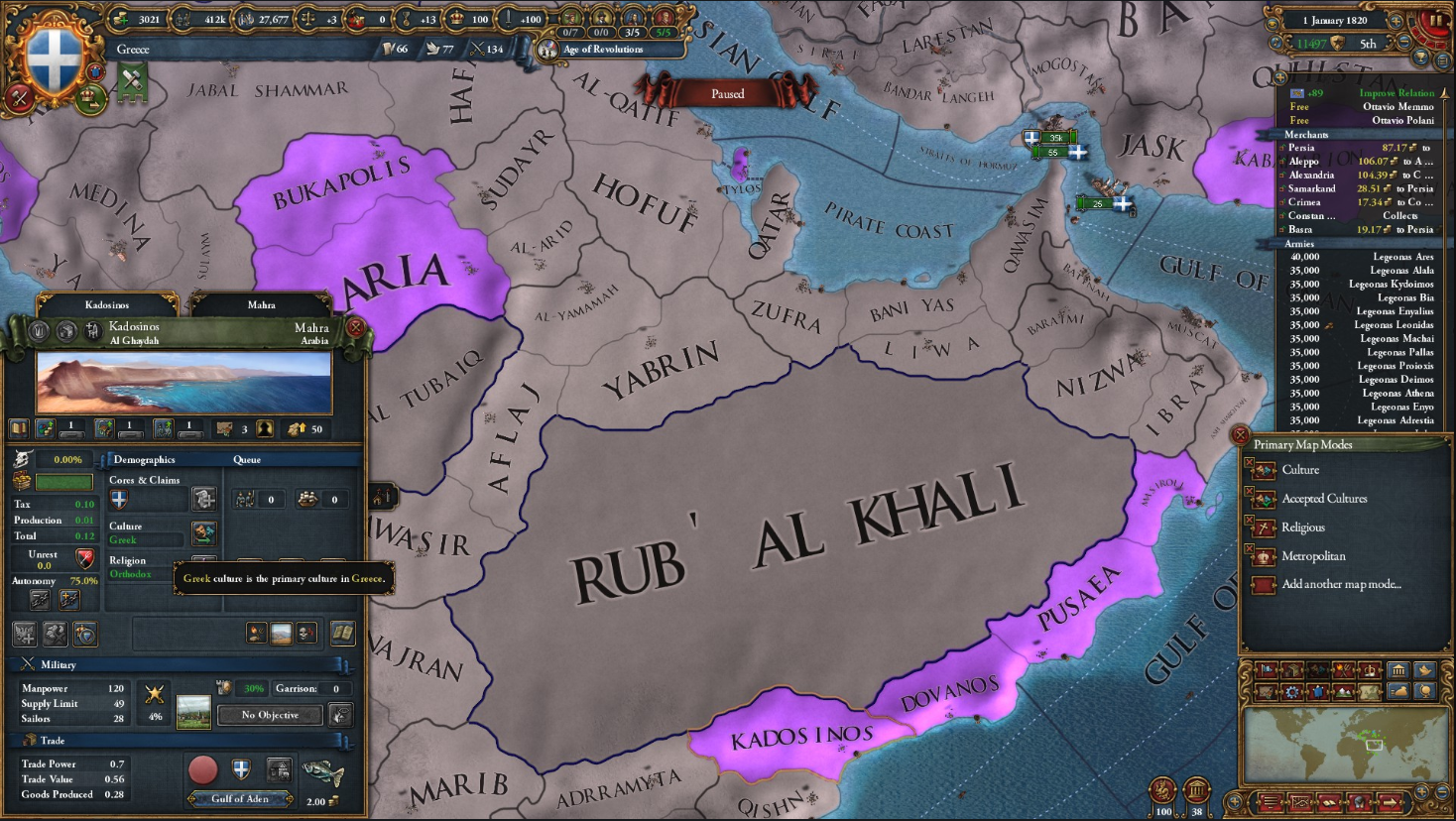 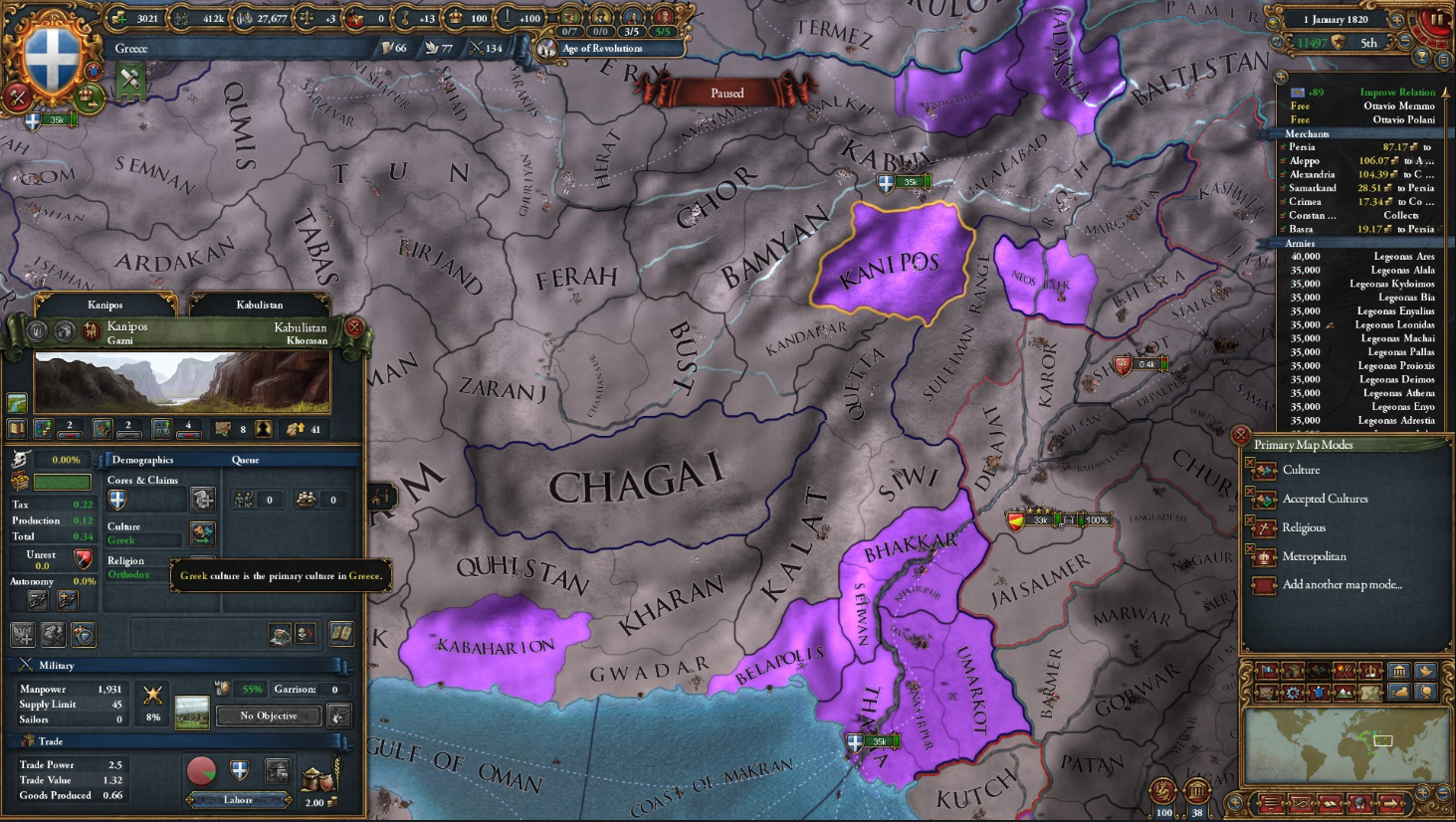 The cultural situation at some point 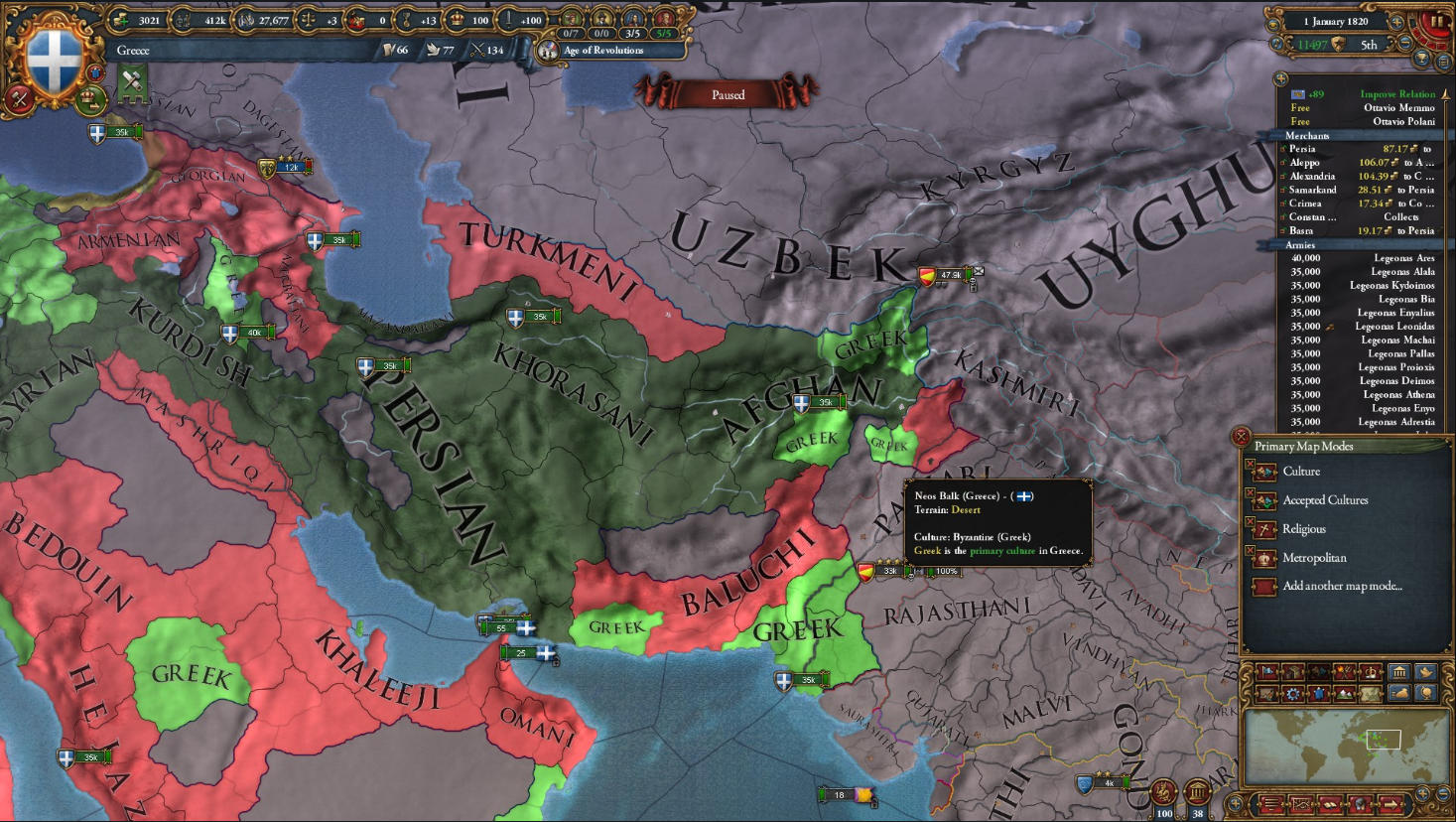 Athens wasn't a great place to have my capital after redesigning Alexanders borders. So I went looking for a better capital area and I finally decided to have the capital around lake Urmia. It was a perfect mountainous spot and considering the vast amounts of lands I had this came close to the middle point of the empire. 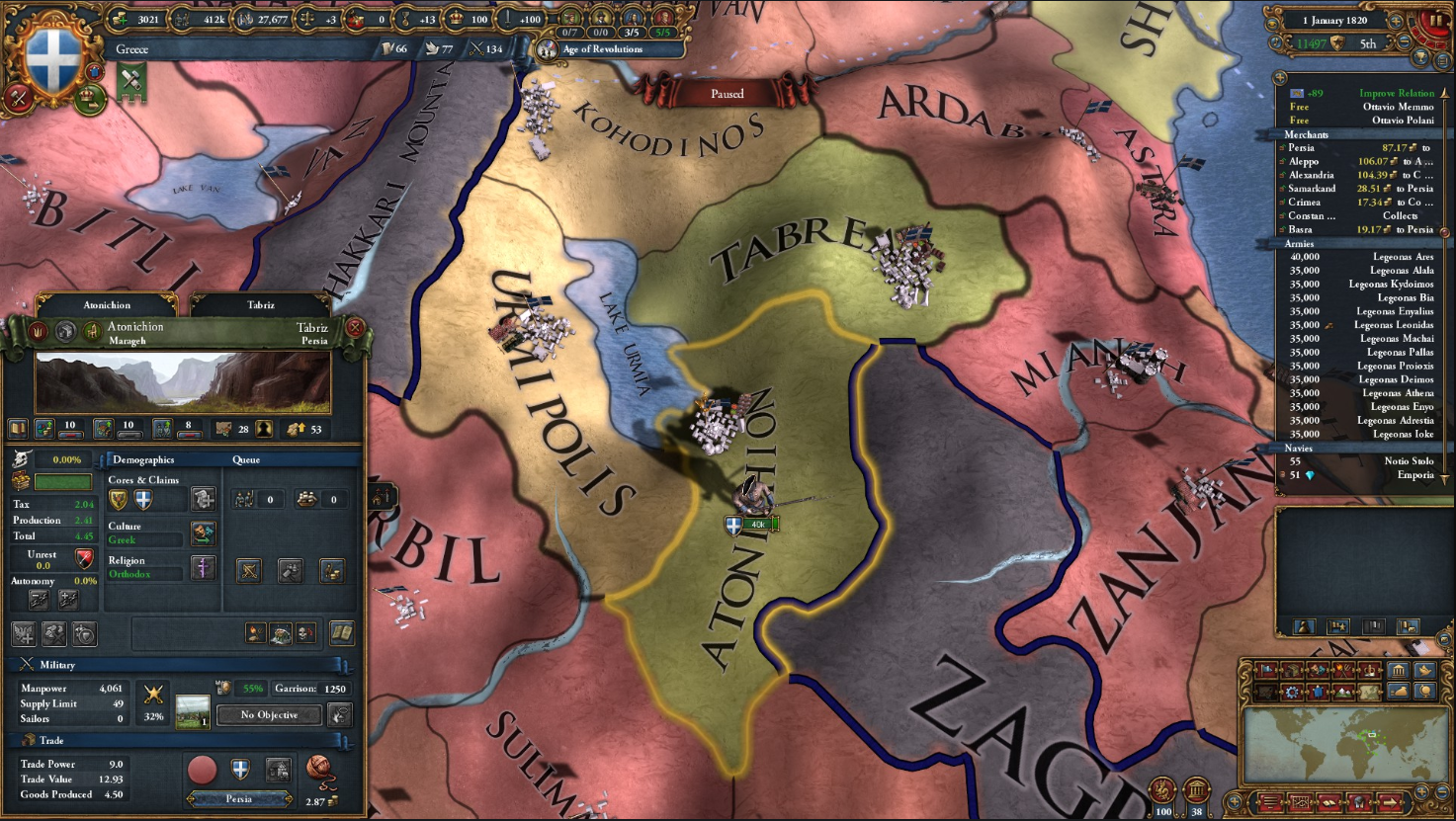 This was an interesting campaign!

Note for the developers: After playing Greece, I think that the Greek mission tree should either be the same as the Byzantine mission tree or Greece should get it's own unique mission tree, based on Alexanders ambitions for example. @Groogy
Toggle signature
EUIV: Dutch Empire | Ottoman Empire | Swedish Empire | Oda Dynasty | Greek Empire | Korean Empire | Mongol Empire | Polish Empire
AAR: Return of the Third League - A Pisan AAR

My Naples one tag WC: 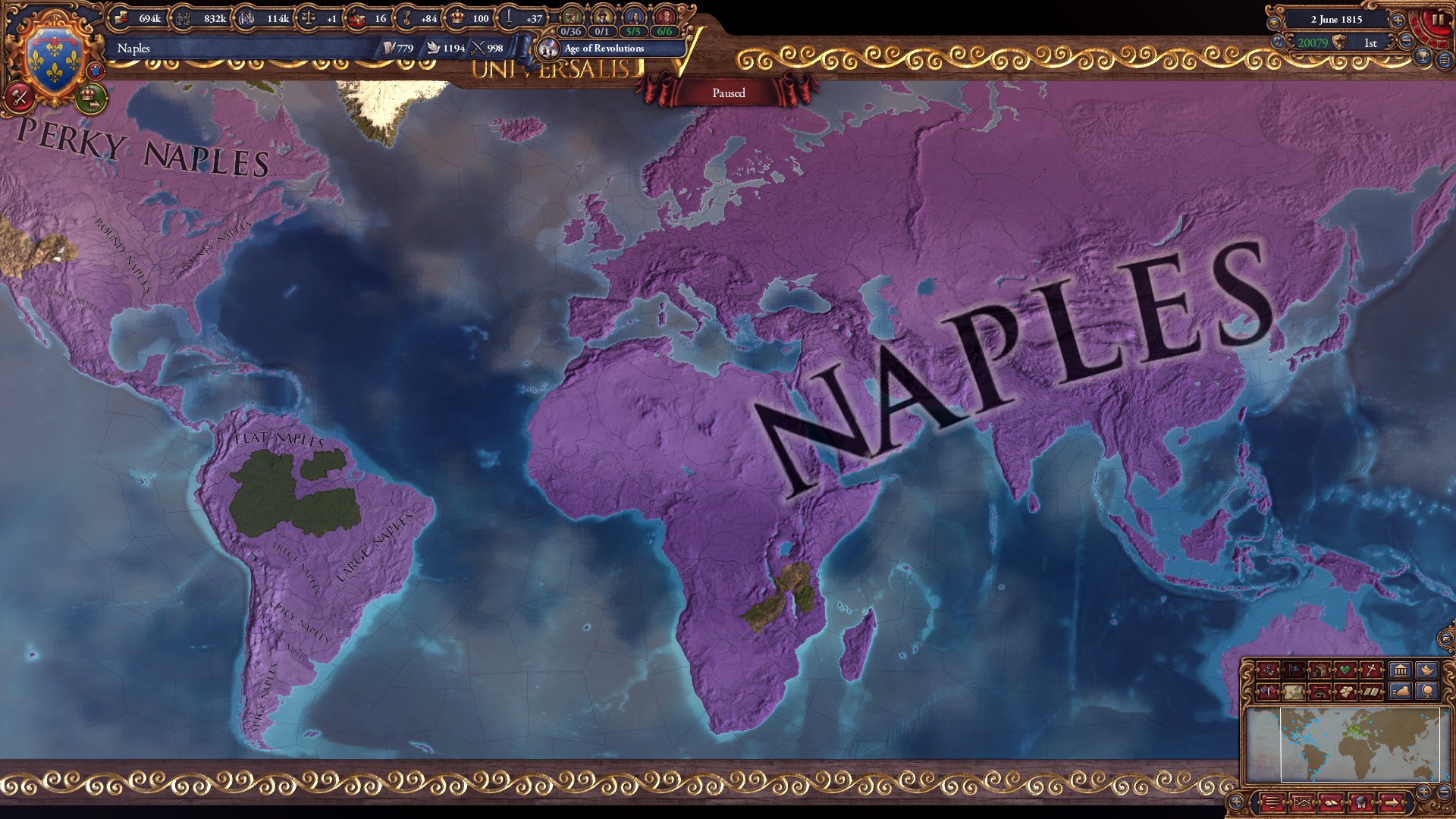 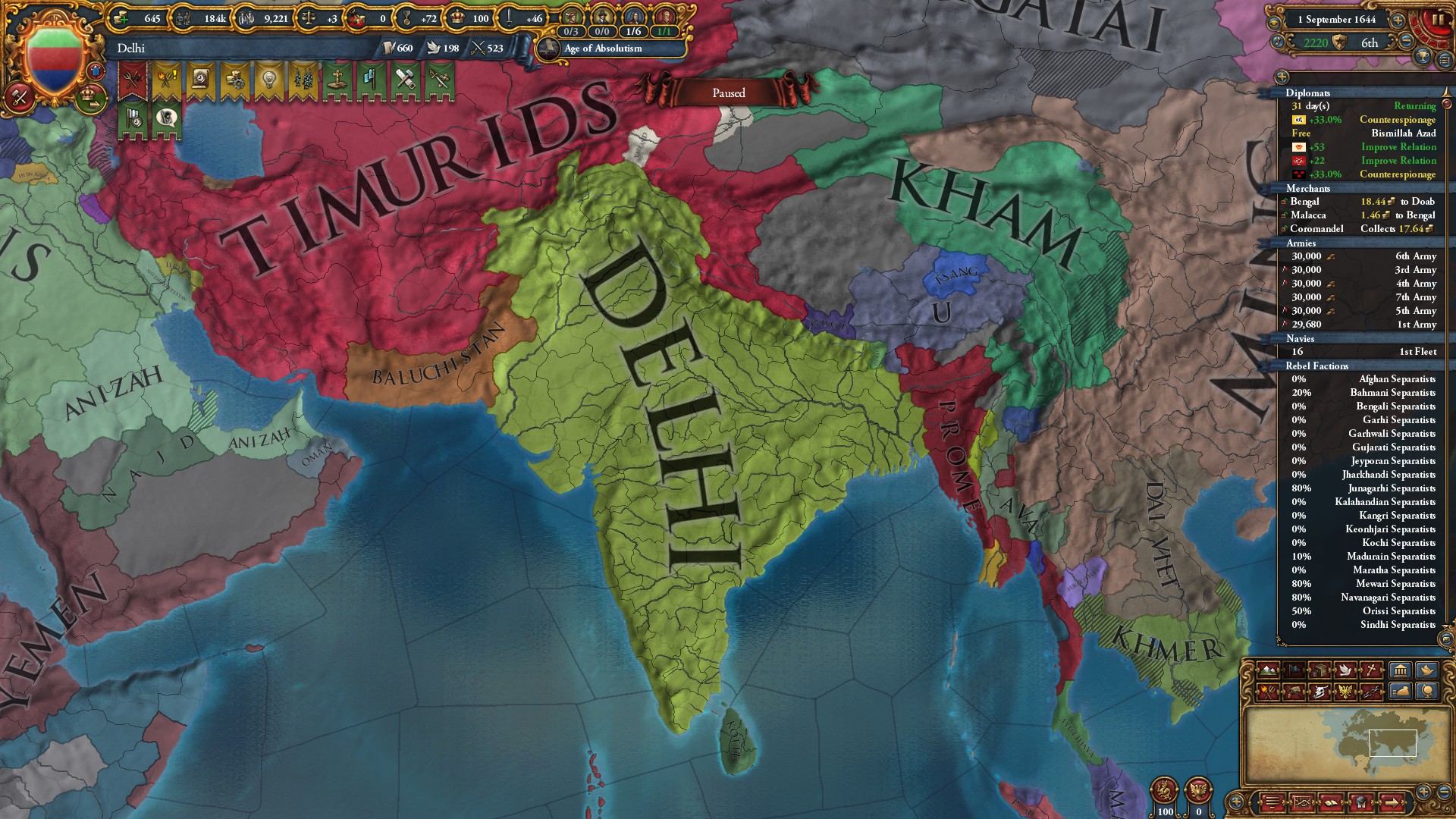 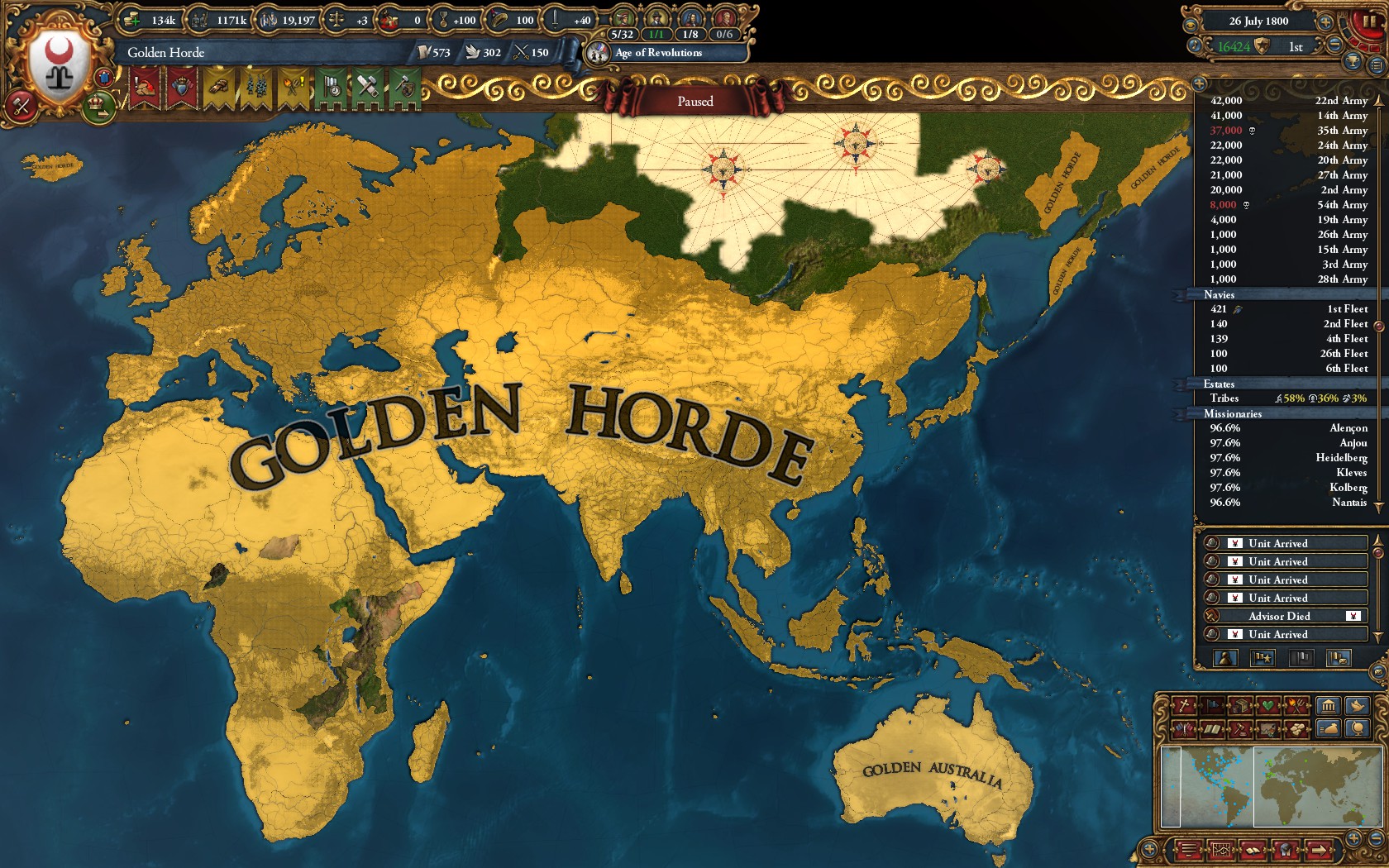 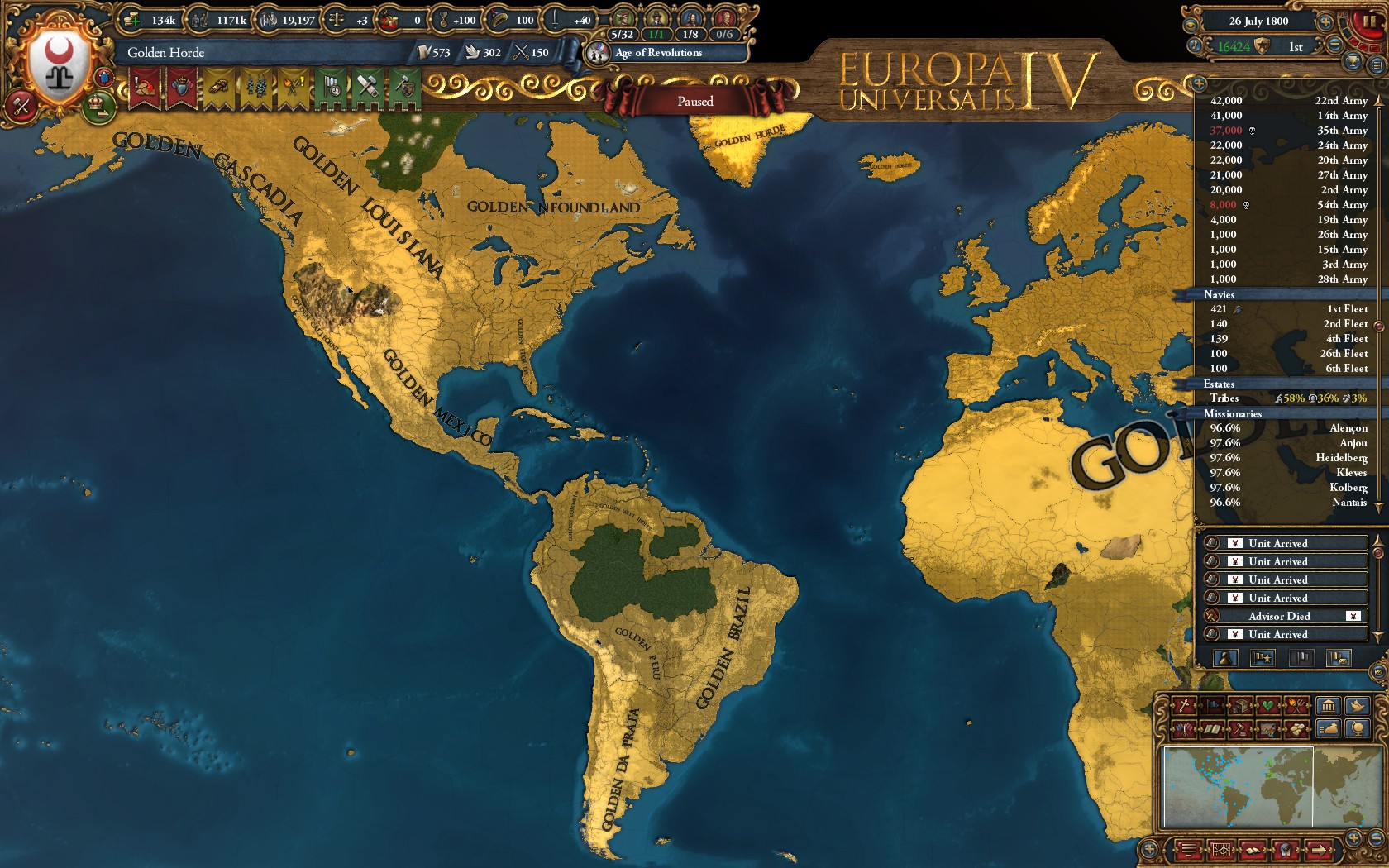 Not much of a strat since Hordes gameplay and WC is mostly mindless blobbing at fast pace: first struck Muscovy when their declared on Novgorod to steal them Moscow and neuter them for the rest of the game, them headed east to Mings and Chinese TC. Then after China: Indochina / Siam and India. Then Africa and Ottomans. Then Europe. Allways pick the weakest opponents to keep wars short and easy, grow faster than the big boys before outnumbering and attacking them, etc. Didn't even bother with a navy before the early 1700s.
More on the reddit post, and the complete journey is on imgur.
Last edited: Feb 7, 2020

Guess why I abandoned this run: 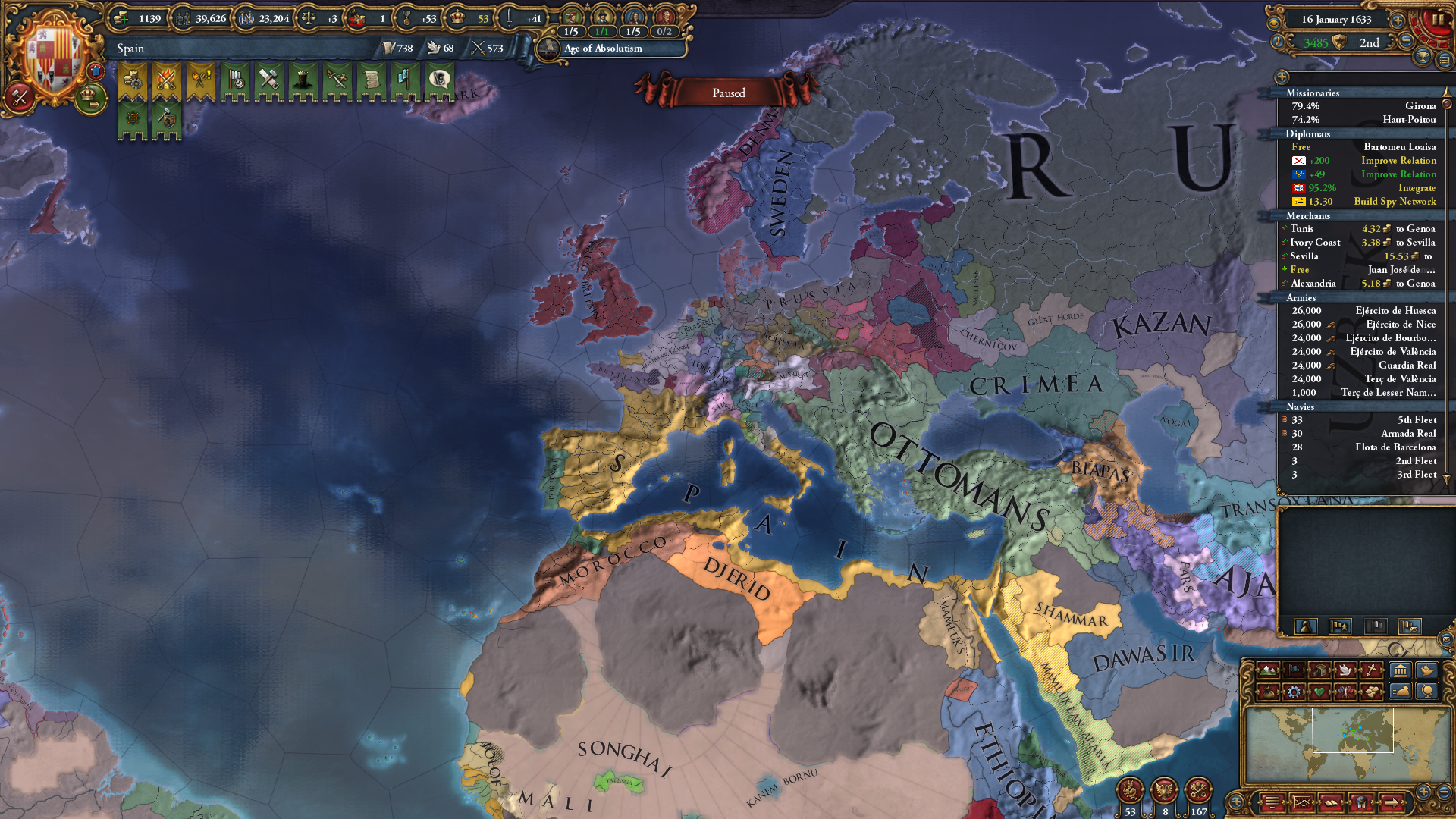 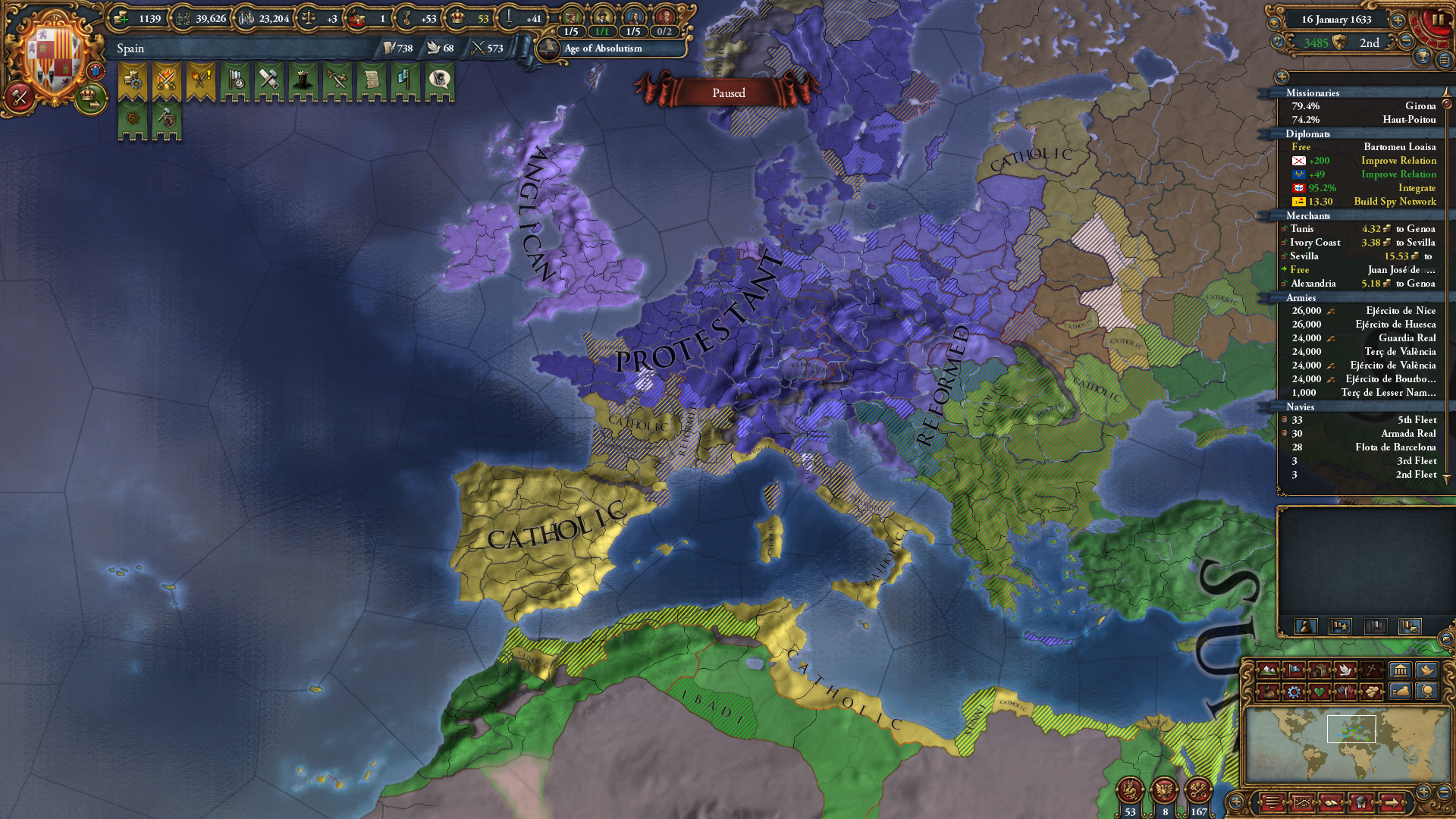 klingonadmiral said:
Guess why I abandoned this run:

Is that not normal? The AI is useless at converting, so there is nothing to counteract the centres of reformation. You'll end up abandoning most games on this patch if that's a problem for you, unless you kill the centres as soon as possible.
Toggle signature
Completed AAR: A Togoku World (patch 1.25, Shinto One Faith and Togoku One Culture)
S 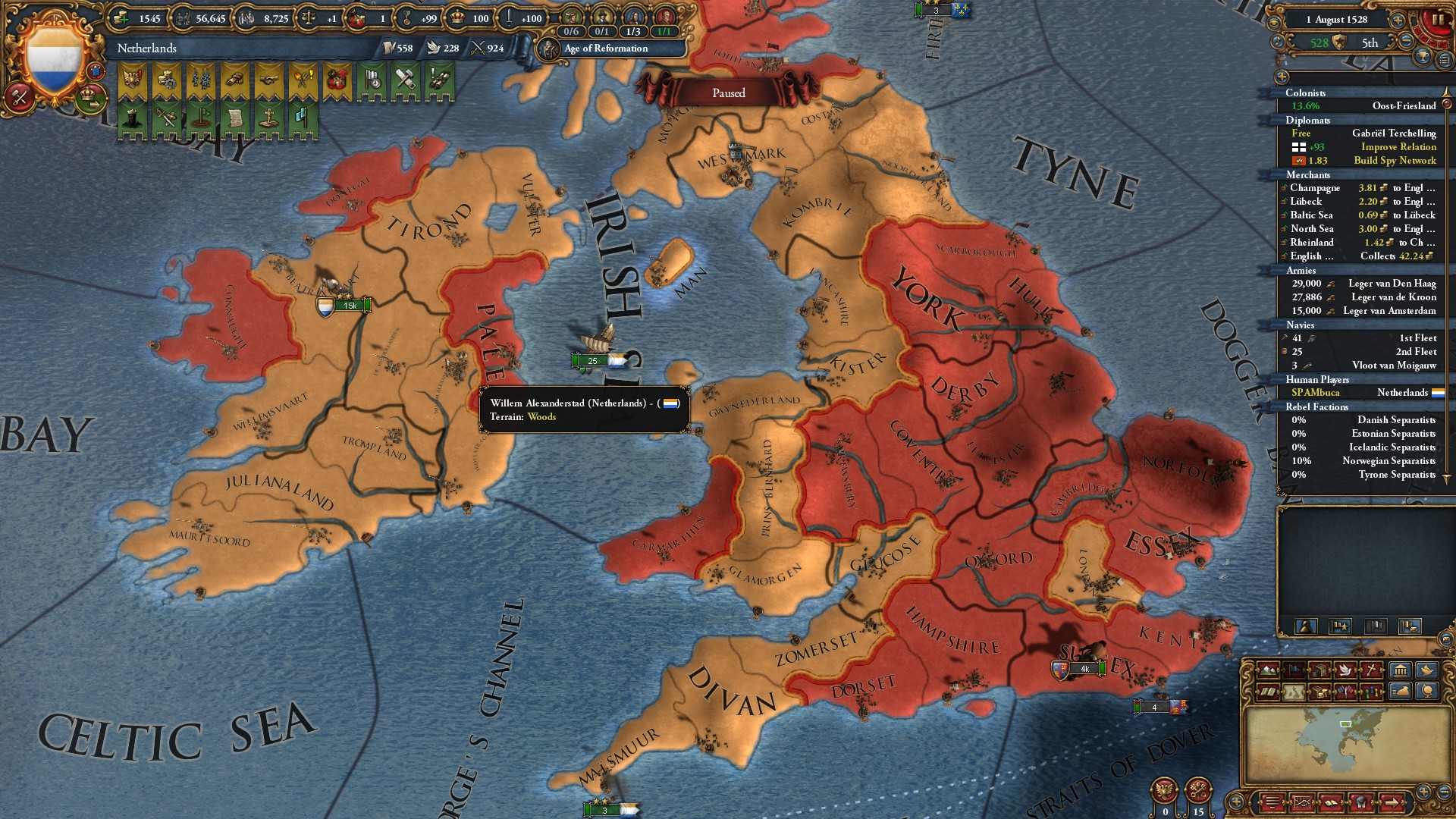 Doing a game as Holland which goes disgustingly well. Burgundian Inheritance, emperorship, Denmark, Muscovy and Portugal/Spain as good as dead. To celebrate, I have decided to "decorate" Britain as it was clearly missing dynamic Dutch names.
Toggle signature
Tryharding games like Europa Universalis 4 in a casual manner. 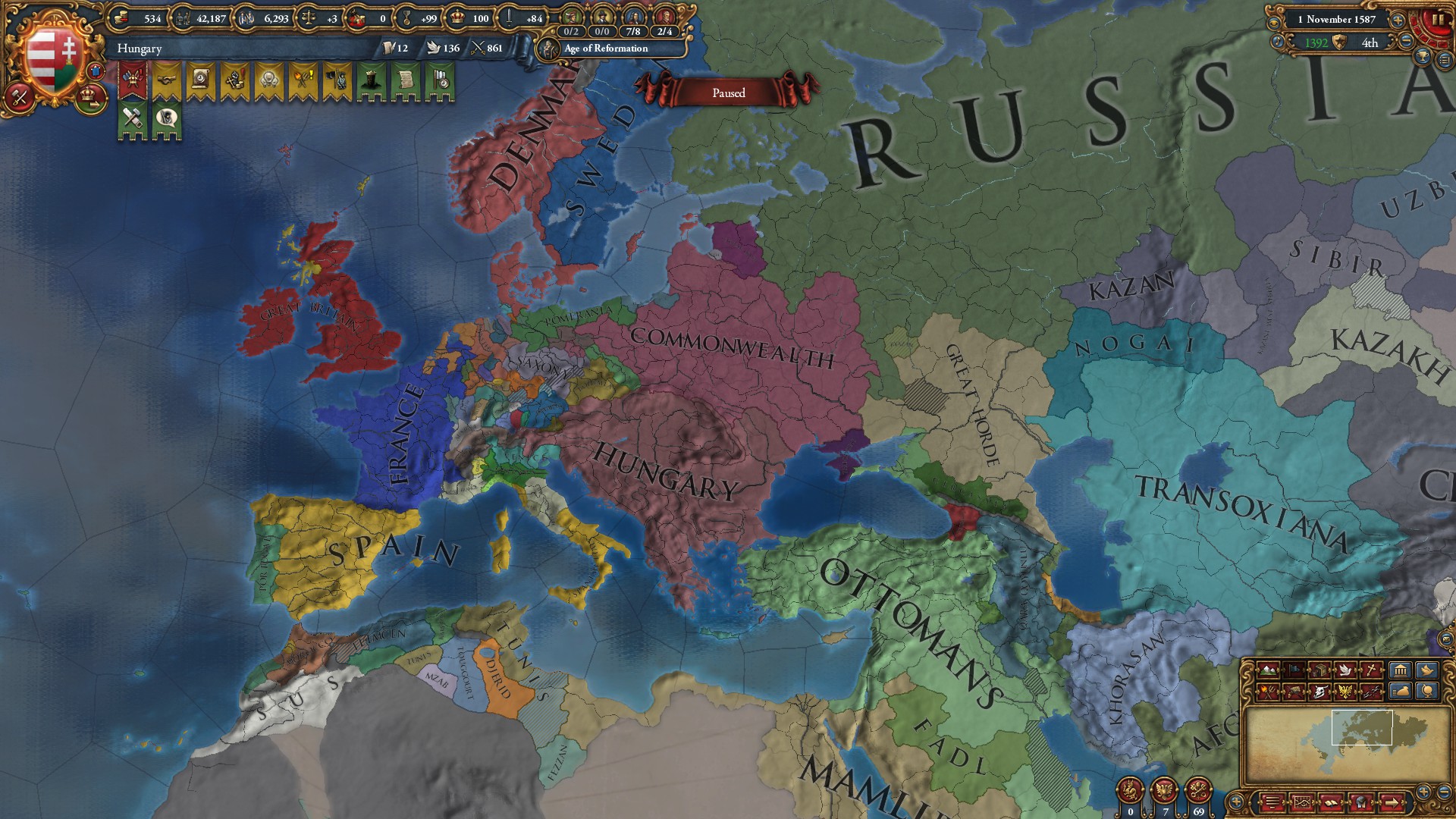 Another day, another aborted Spain run: 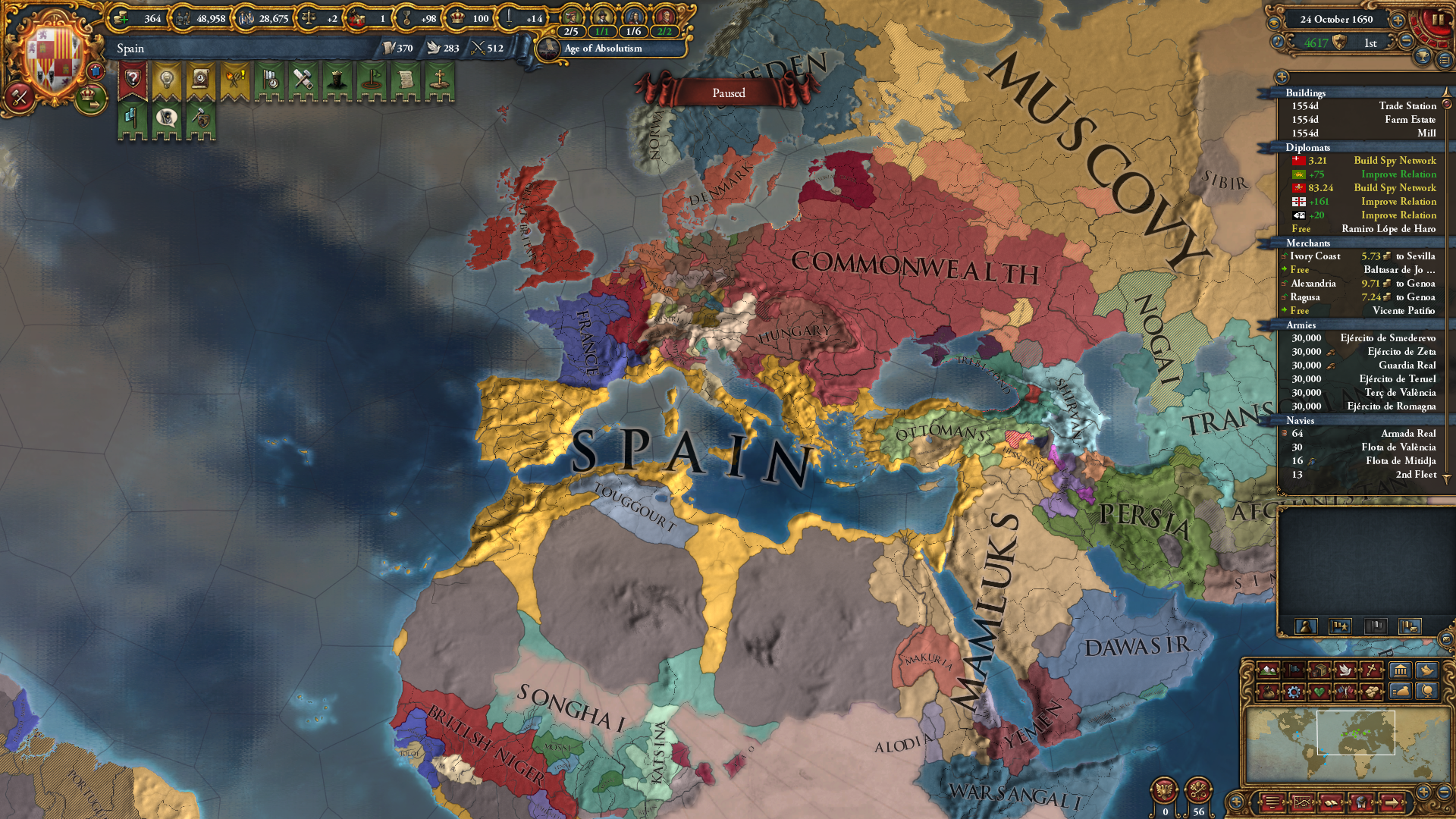 Mongolia --> Yuan --> Mongol Empire. I really didn't optimize this, but CCR and razing combined made it straightforward regardless. I barely used the influence/admin annexation stuff. I finished WC ~ 1783 and decided to just speed 5 to 1790 to annex a subject rather than bothering to break truce on it and attack it. This isn't an impressive horde one tag date anyway.