Menu
Install the app
You are using an out of date browser. It may not display this or other websites correctly.
You should upgrade or use an alternative browser.
Europa Universalis IV 74613 EUIV: Suggestions 15734 EUIV: Technical Support 5556 EUIV: FAQ & Strategy Guides 176 EUIV: AAR's, Let's Plays, and Fan Fiction EU IV: Alternate History Short Story Contest Contr 26
Show only dev responses
E

I'm currently finding it ridiculous how powerful these government reforms seem to have made hordes. My early game was honestly pretty sub par, but by now this is absurd. FWIW I'm intending to form the Mongol Empire via Yuan and I'd already done Mongolia into Yuan so I picked Korchin for a change. Anyway. 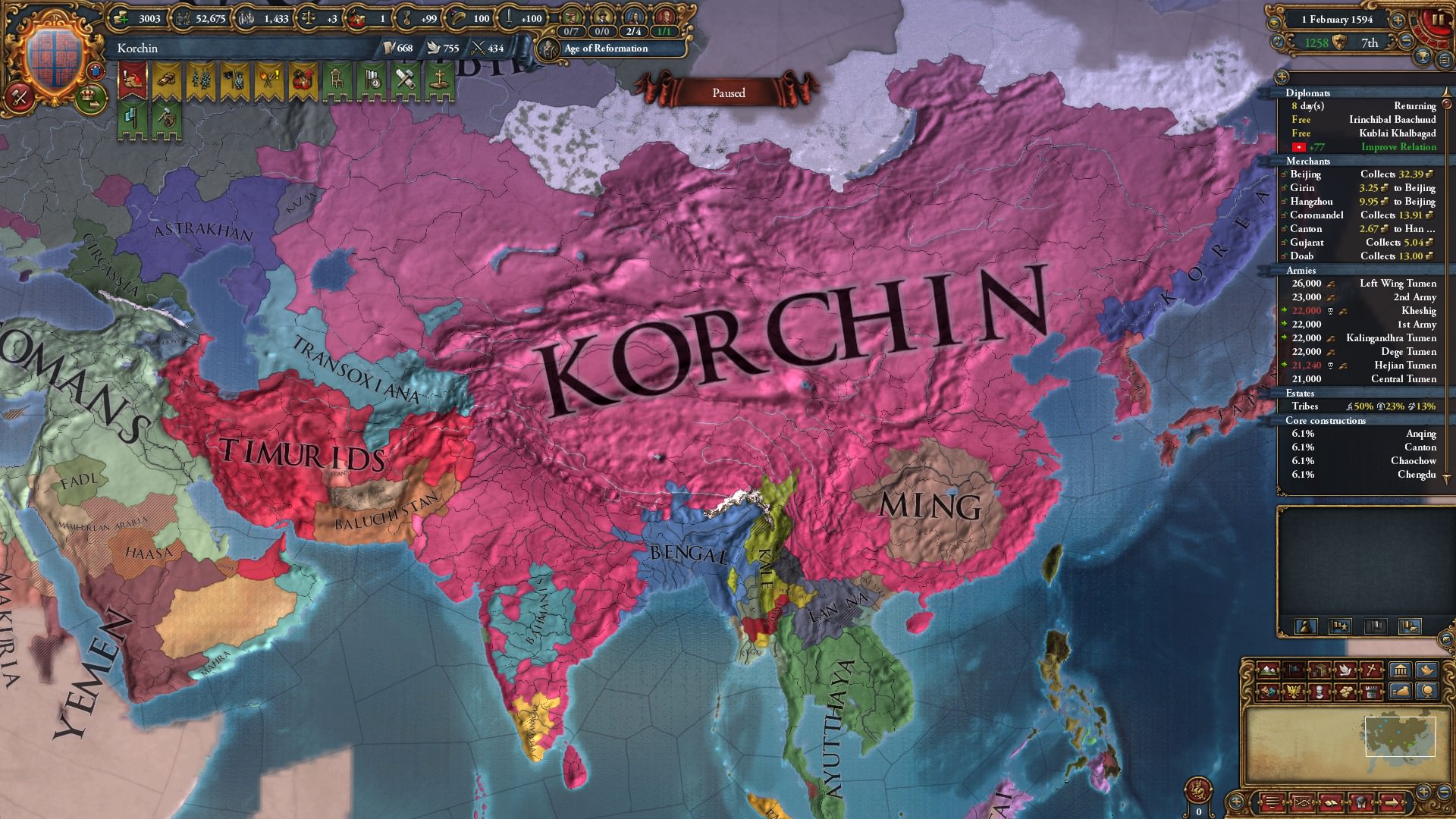 I was very late to China, ignoring it mostly until the mid 1550s. Had I played the early game more efficiently, I could be ahead of where I was now, although on the flipside that allowed me to conquer India while it was still splintered and not a hugbox.

Due to the new government reforms giving -5% CCR and -5 years of separatism, I have -20 years of separatism (5 from traditions, 10 from humanist, 5 from reform) and -55% CCR (25 from admin, 25 from national ideas, 5 from reform). Combined with all the other unrest modifiers that humanist+pagan decisions can get you and I'm able to take just shy of 250% OE pre absolutism (350% before razing) and be absolutely fine. (I've already taken on 230% and sat happy; no rebels) 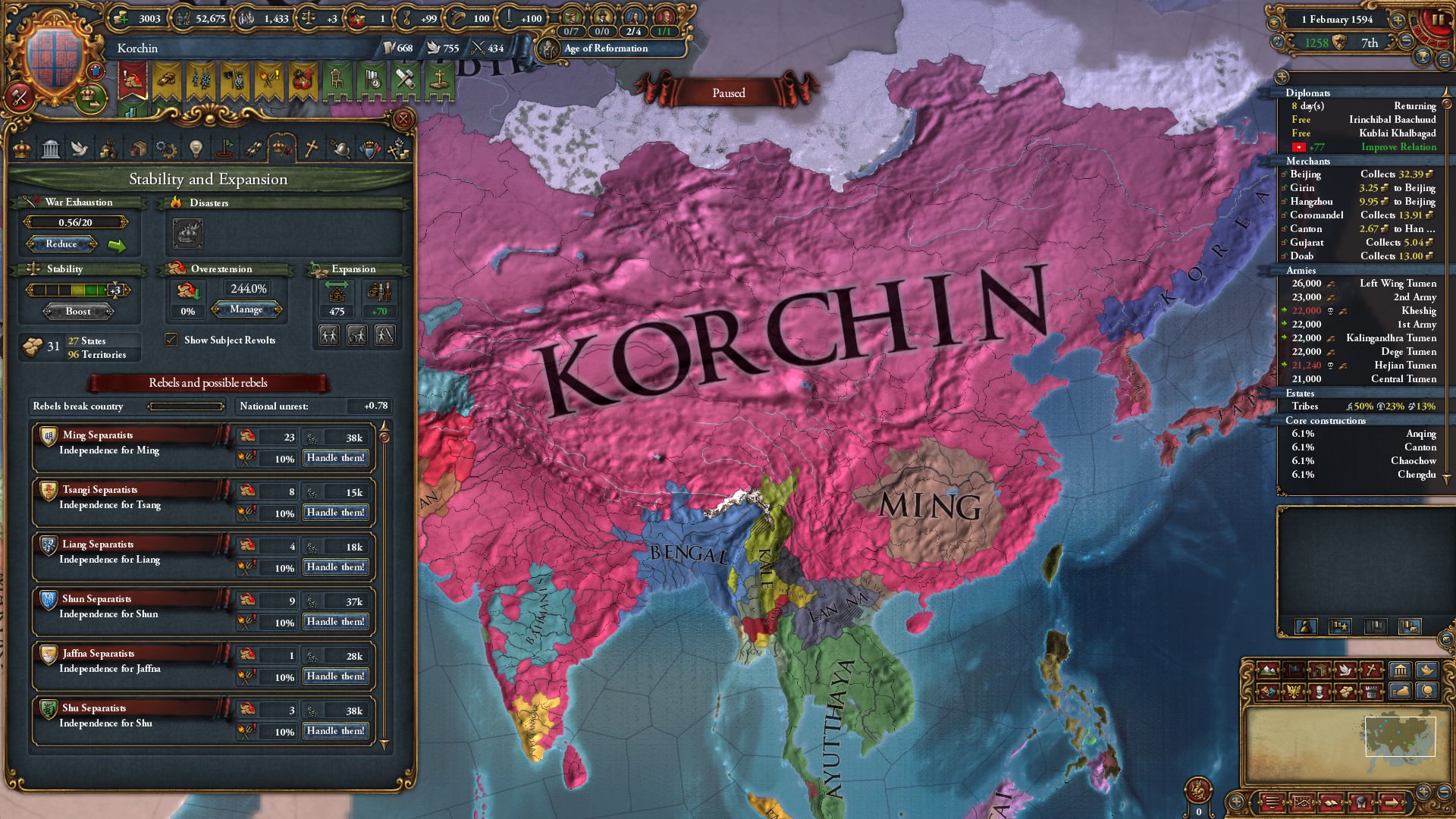 The huge CCR reduction means I core in just under a year and a half, before rebels even spawn. The massive unrest and separatism bonuses mean that I have barely any unrest to begin with, even in freshly conquered territory. Here are some shots of freshly conquered and some older TC land. 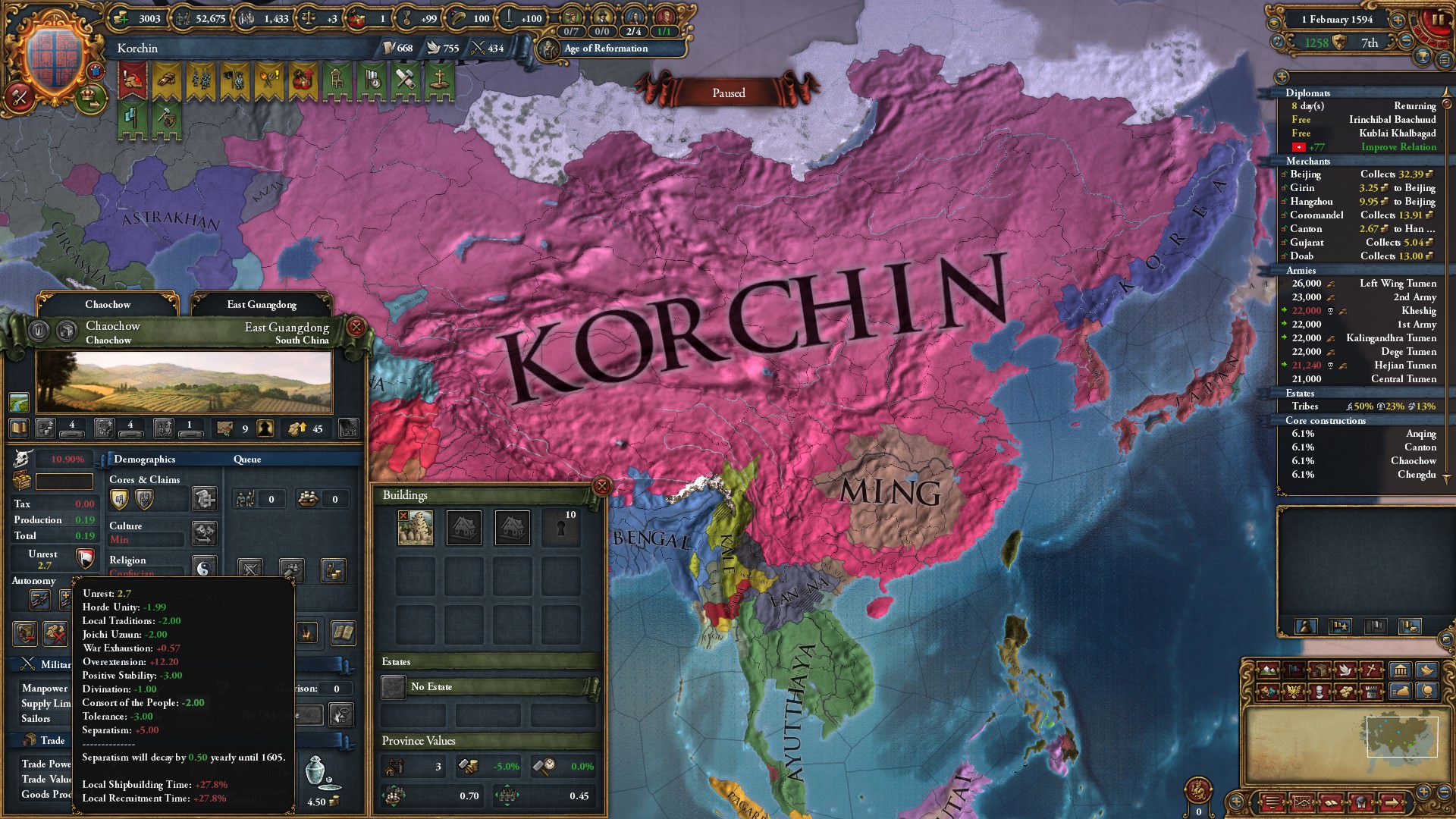 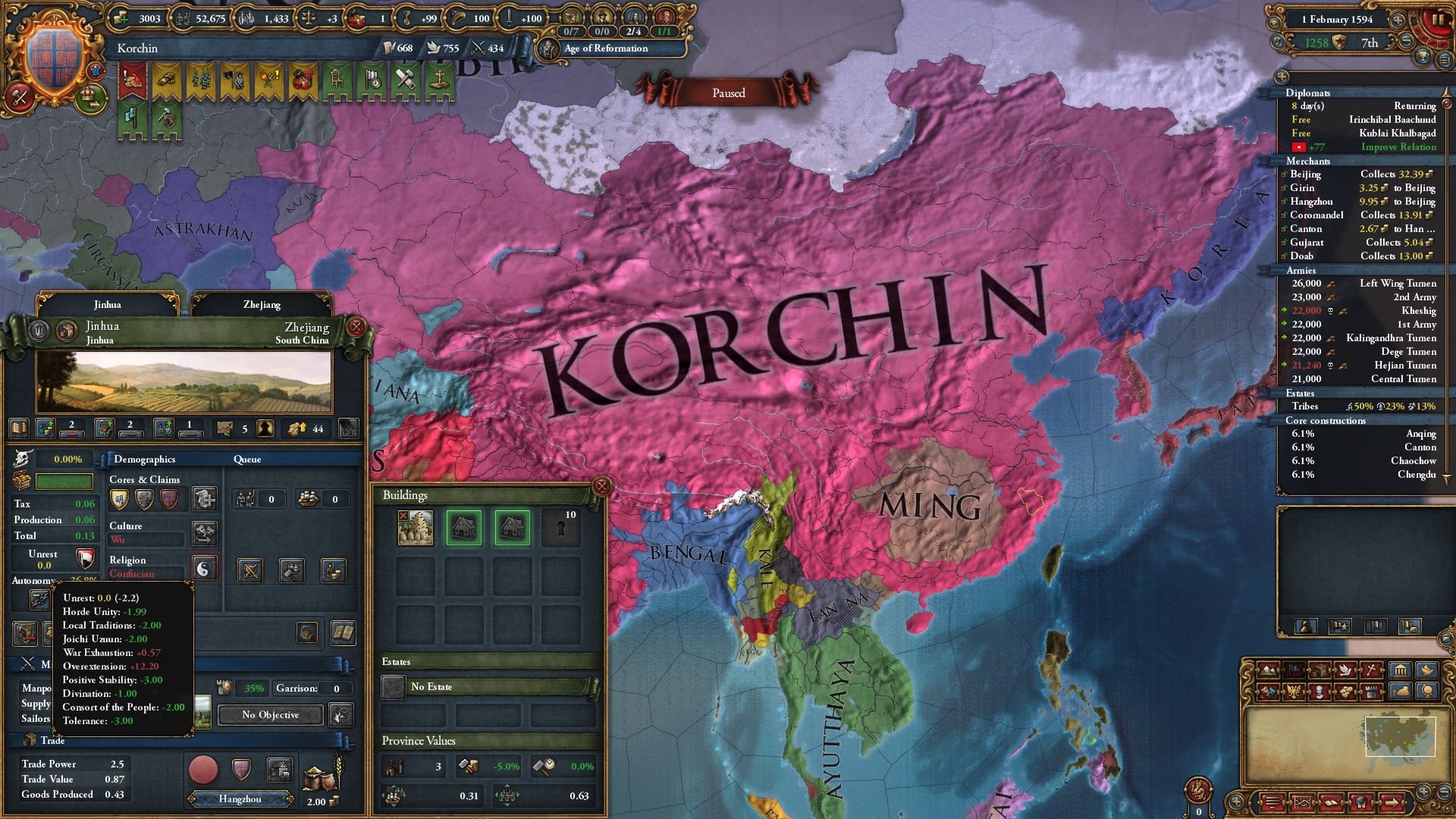 Due to the year still being somewhat earlyish, I'm still getting stupid monarch points from razing. This, combined with the 55% CCR means that I actually gain admin points by taking land. The events from OE are completely meaningless because I am swimming in monarch points, constantly ahead in tech, dumping into whatever I can think of. Stab hits don't matter. The +10 unrest events don't matter, because I'll finish coring before the revolts happen and by then I'll have negative unrest in those provinces again.

All that said, the corruption changes suck and I wish I could RP a bit more and not have to beeline TCs like this and move my capital to the Ural, but hey, at least I'm finding this fun.

Kingdom of Tuscany, 1444-1610
Venice is being slowly dismembered by Savoy-Austria-Tuscany alliance.
One more province to go and I form the Kingdom of Italy, I'll have to betray my long term and most loyal ally, Savoy.
No more papal State.
I guess in few years I will have to convert to protestantism.


(I picked Quality and Innovative to see how feel this "Modern Firearm Techniques" policy in battle). 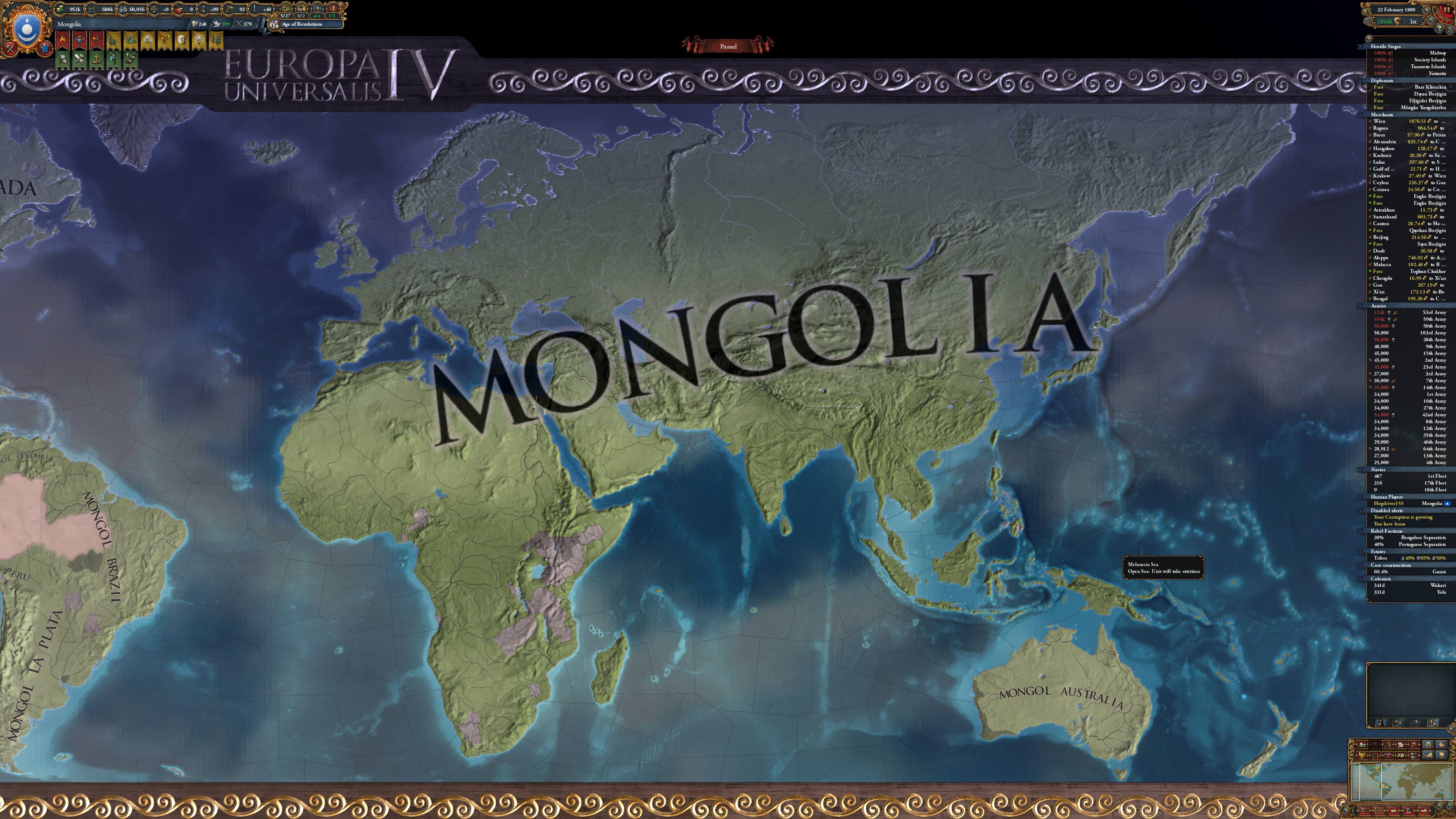 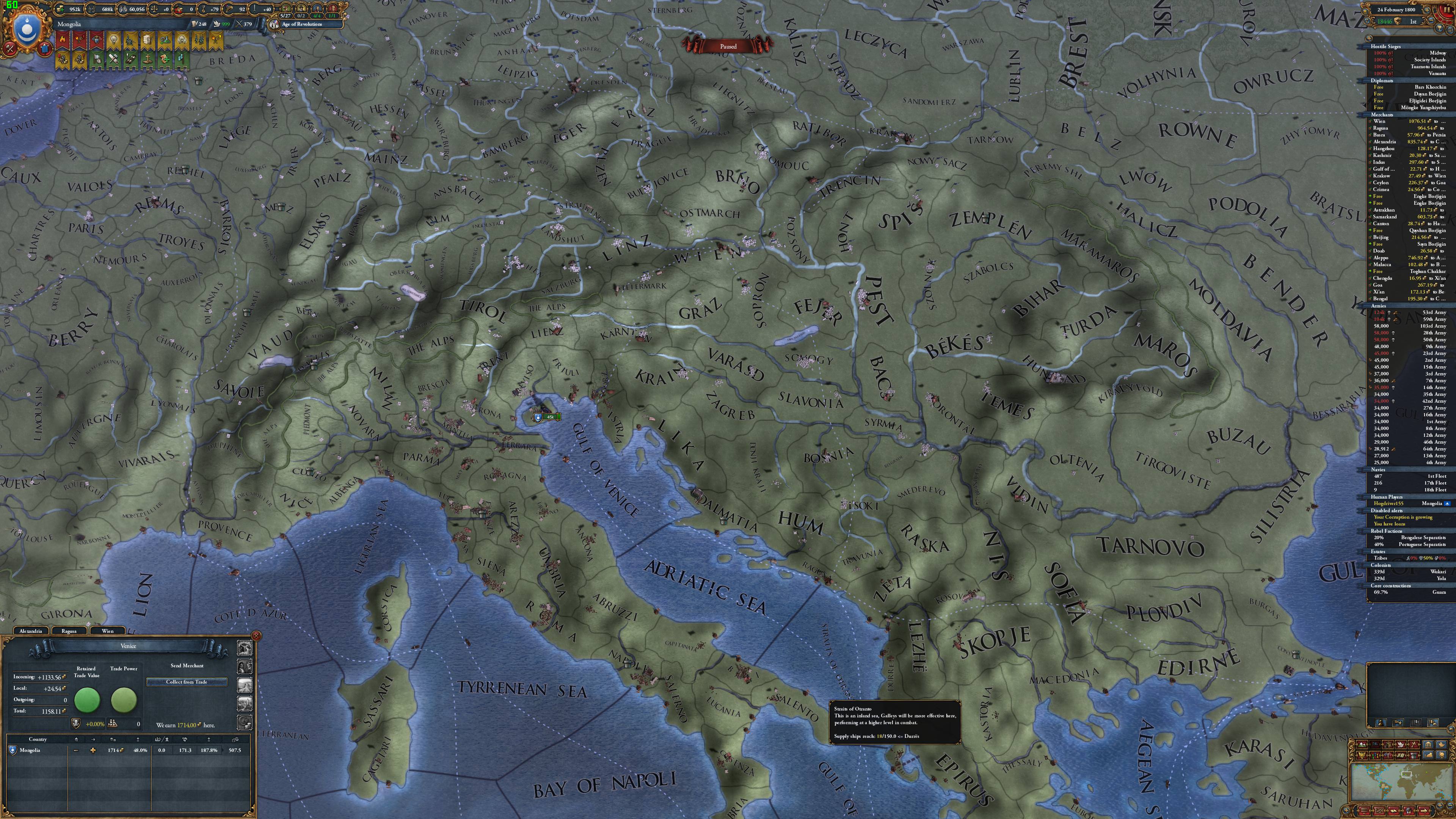 A fun little self-made speed achievement: as Taungu, own all of Burma and Indochina by 1500. A more accurate First Toungoo Empire. 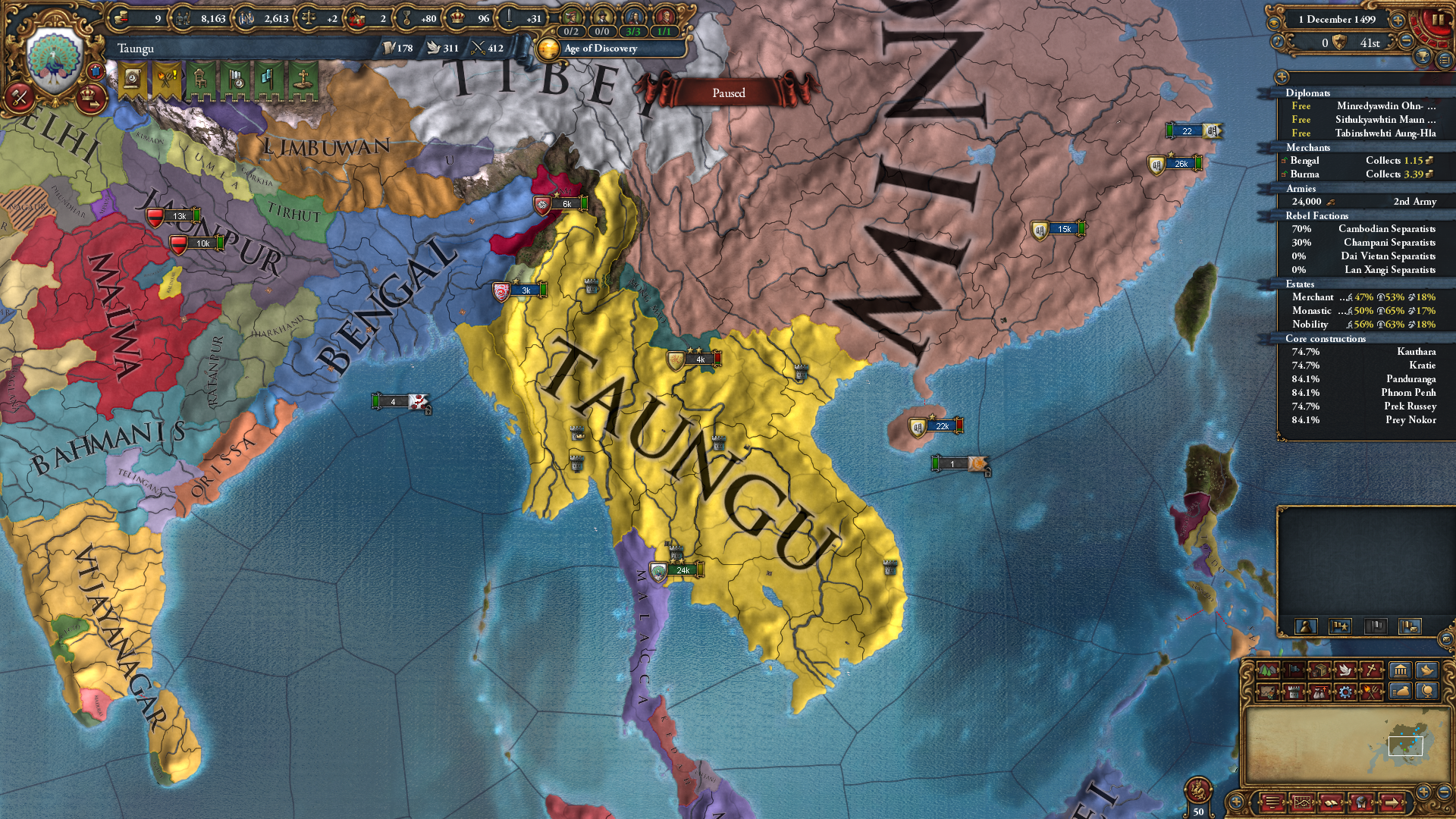 The free people of Dithmarschen, having finally crushed the Danish oppressors (never mind that they've not actually been a thread for the last 150-ish years)

I decided to play a hyper-tall game, focusing on development. Every European province is 30 dev or more, and I'm the 2nd-ranked great power when my vassals (Norway and Wessex) and my colonies are taken into account. I'm ludicrously wealthy, thanks to dominating the English Channel, and I've got the highest army morale in the world. 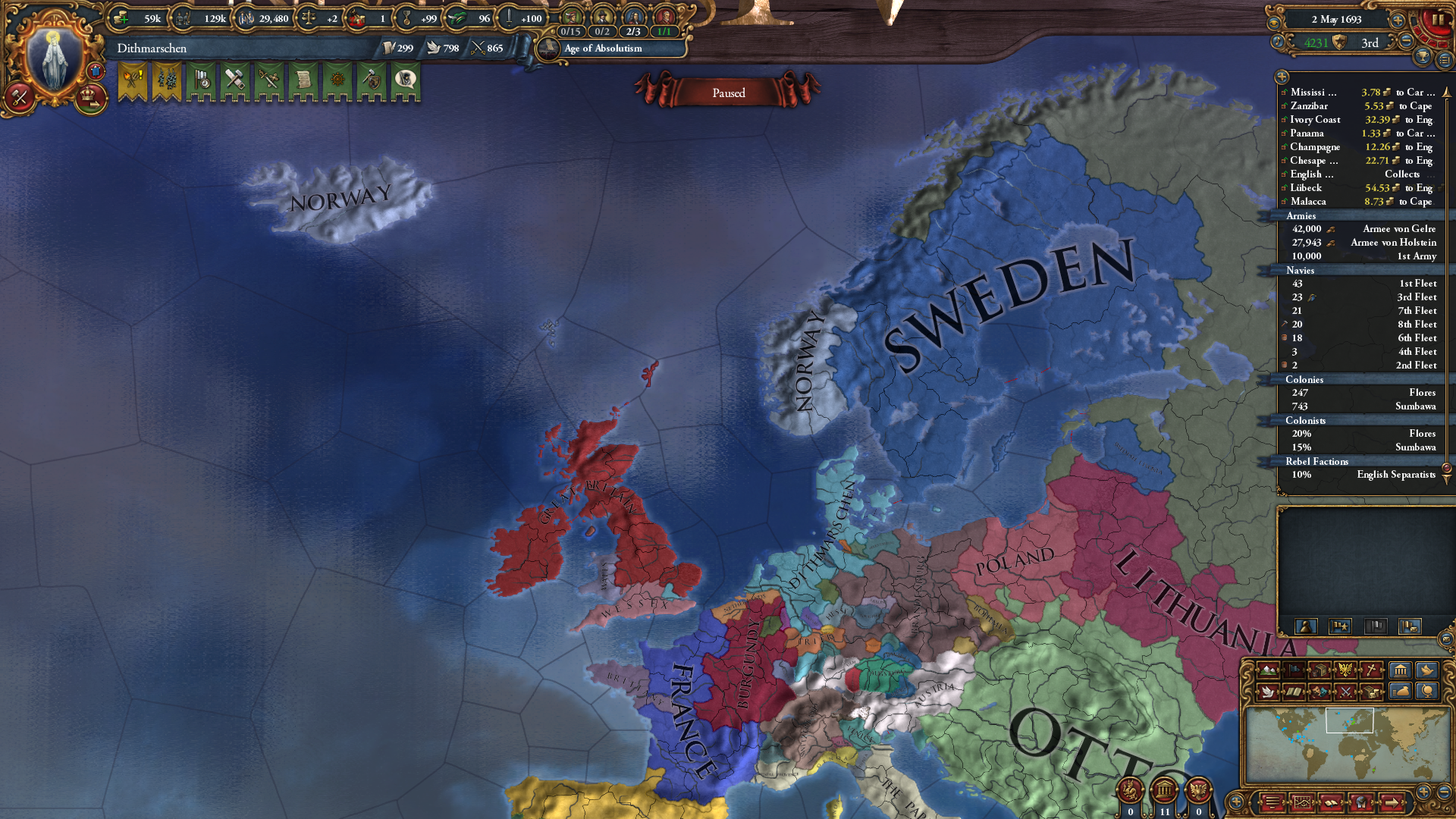 England -> Great Britain Ironman
Managed to gobble the north coast of Iberia after Castille got wrecked by Aragon in their first war. Took Portugal from there and began colonising the Americas. I helped Sweden gain their independence from Denmark, who were at the time allied to the Commonblob, after the Ottomans interfered in the war on my side.

Have moved into Africa and i'm currently warring with Jolof and Morocco mainly so i can force the latter into breaking their alliance with the Ottomans.

Haven't had a war with France yet but i can feel it coming at some point once i finally stop spreading my army so thin across the globe. 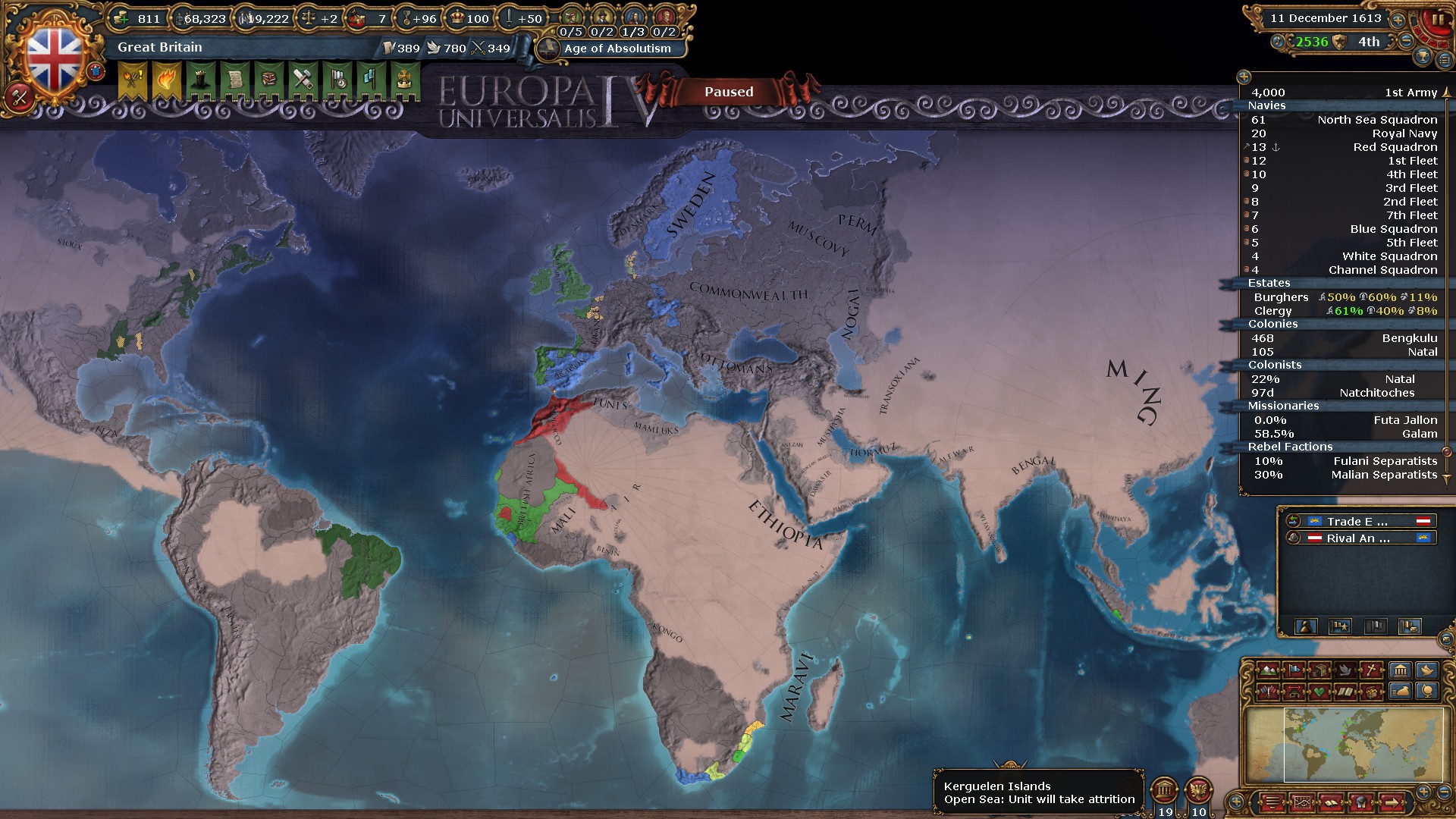 An interesting map! Taken just before I integrated France.

In Asia we have a Manchu, a Tibet, a Deccan (Bahmanis) and a Mughals.
In Europe I have Spain, France and Hungary as PUs. Northumberland is a vassal. Brandenburg, Austria and the Livonian Order helped me out by adding a ton of provinces to the HRE.
I revoked Privelegia maybe 20 years ago. Brandenburg had Prussia as a PU subject for much of the 1500s. 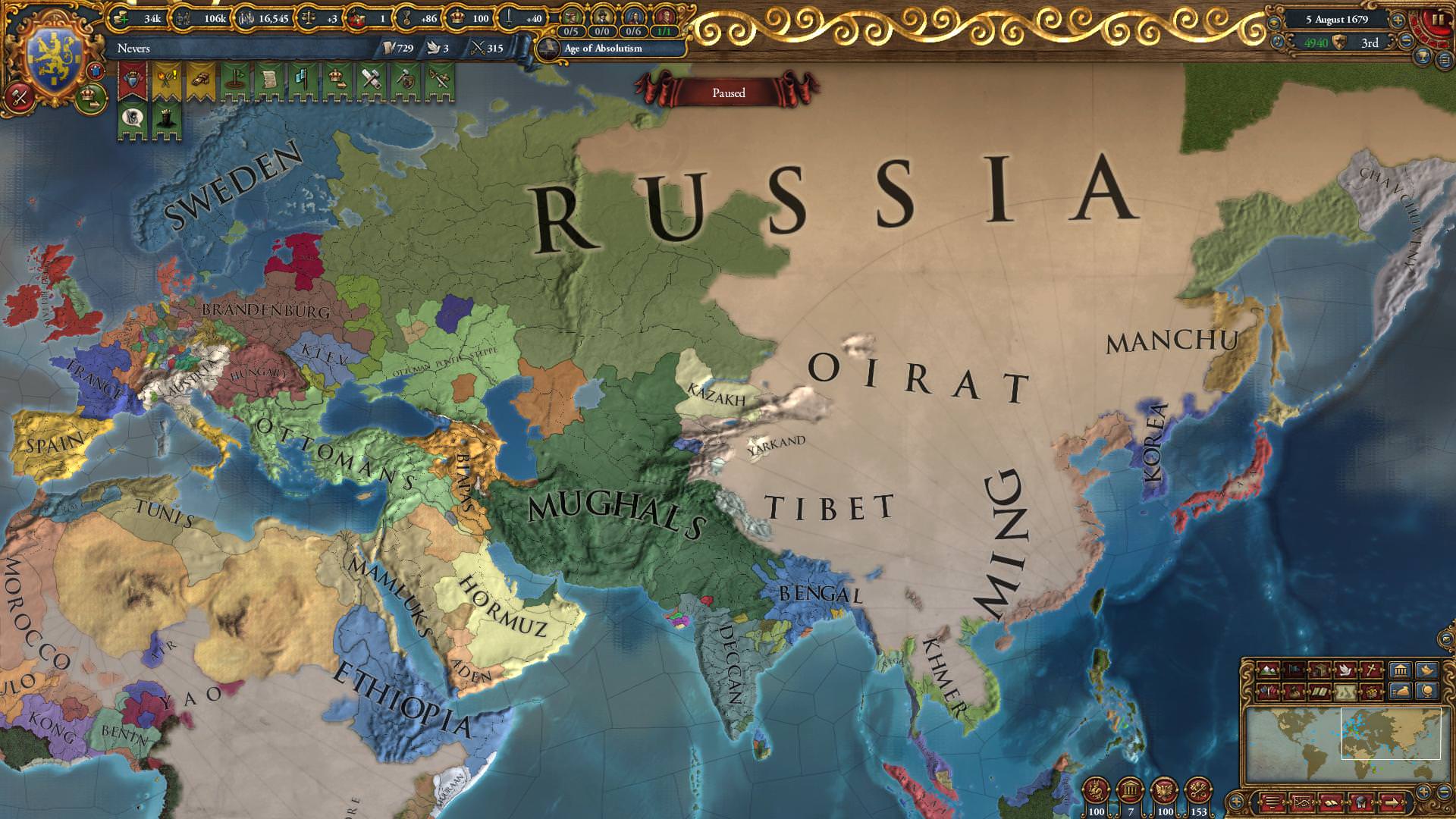 Early on I made full use of my rich copper mine and militaristic ideas what resulted in an easily dominated game.
Sweden is definitely not overpowered 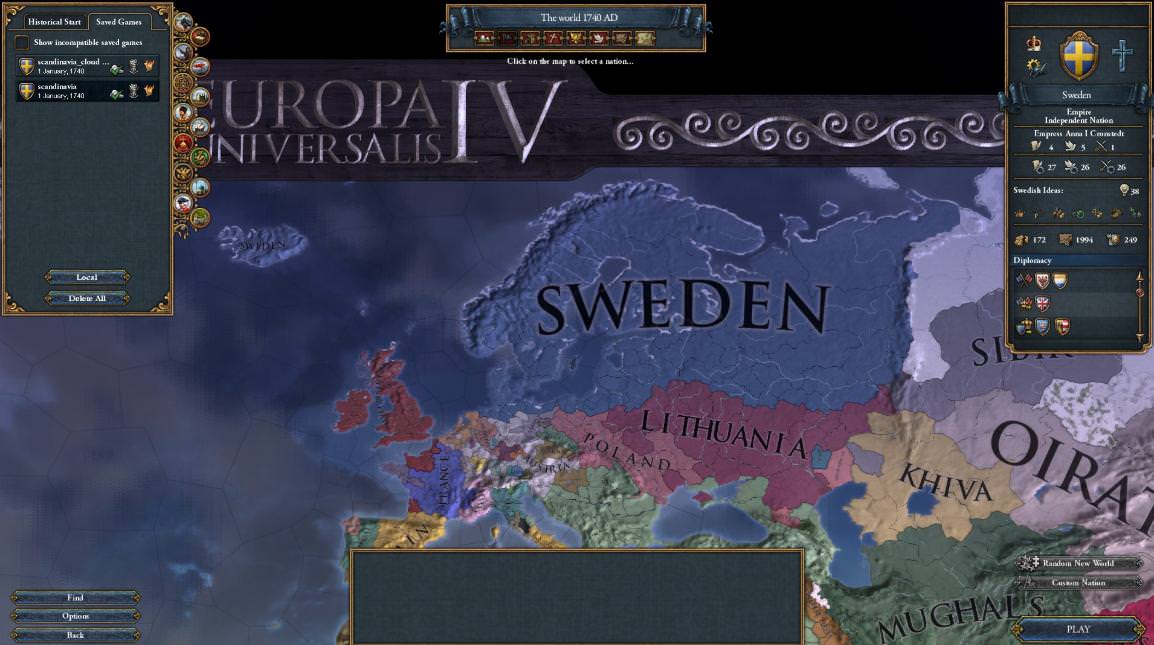 After I became the dominant ruler in Russia, I decided to fully integrate the Russian lands into the realm and make sure that the folks stay united under a common language and culture. 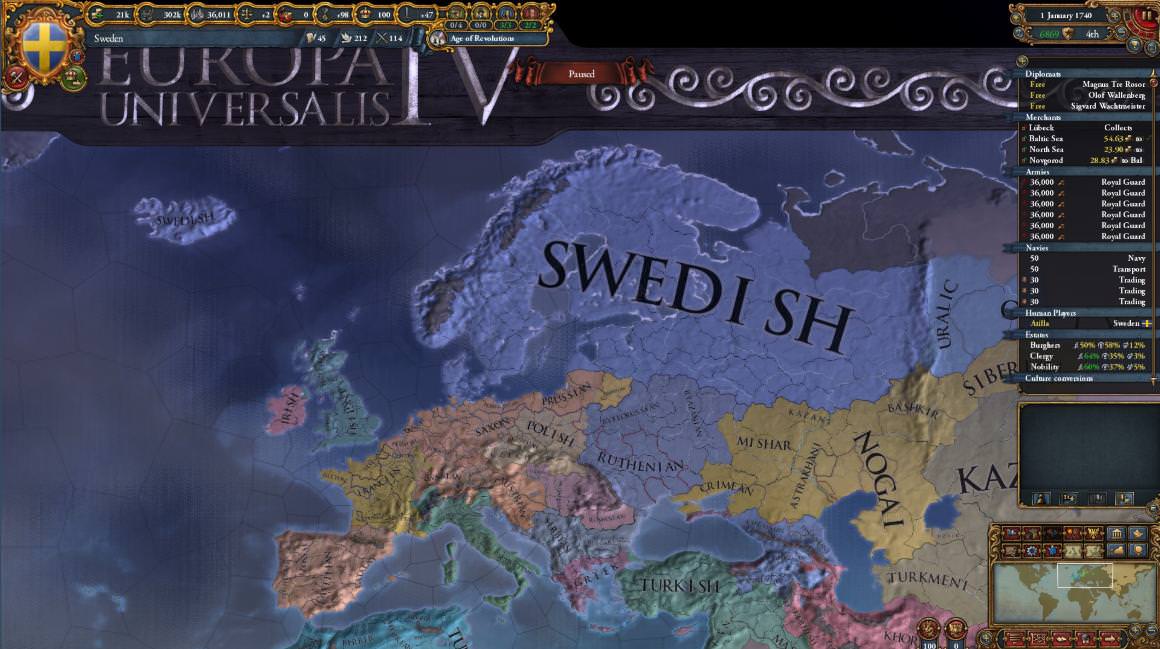 At some point, the British came under a PU what made the northern Realm complete ! 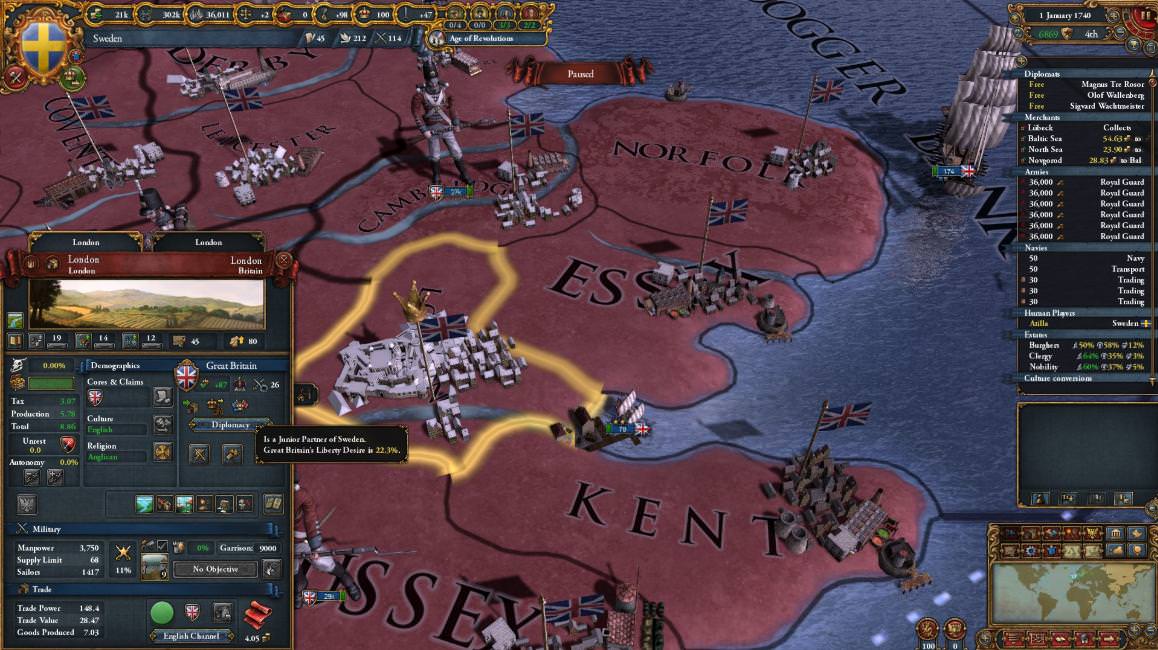 Political map as of the official end date. I managed to get a claim on the throne of GB right toward the end, and I was still involved in the war to enforce the union when the time expired. Other than the British, I held all of Europe, was the only European presence in Africa, and had a majority of the Americas as well. 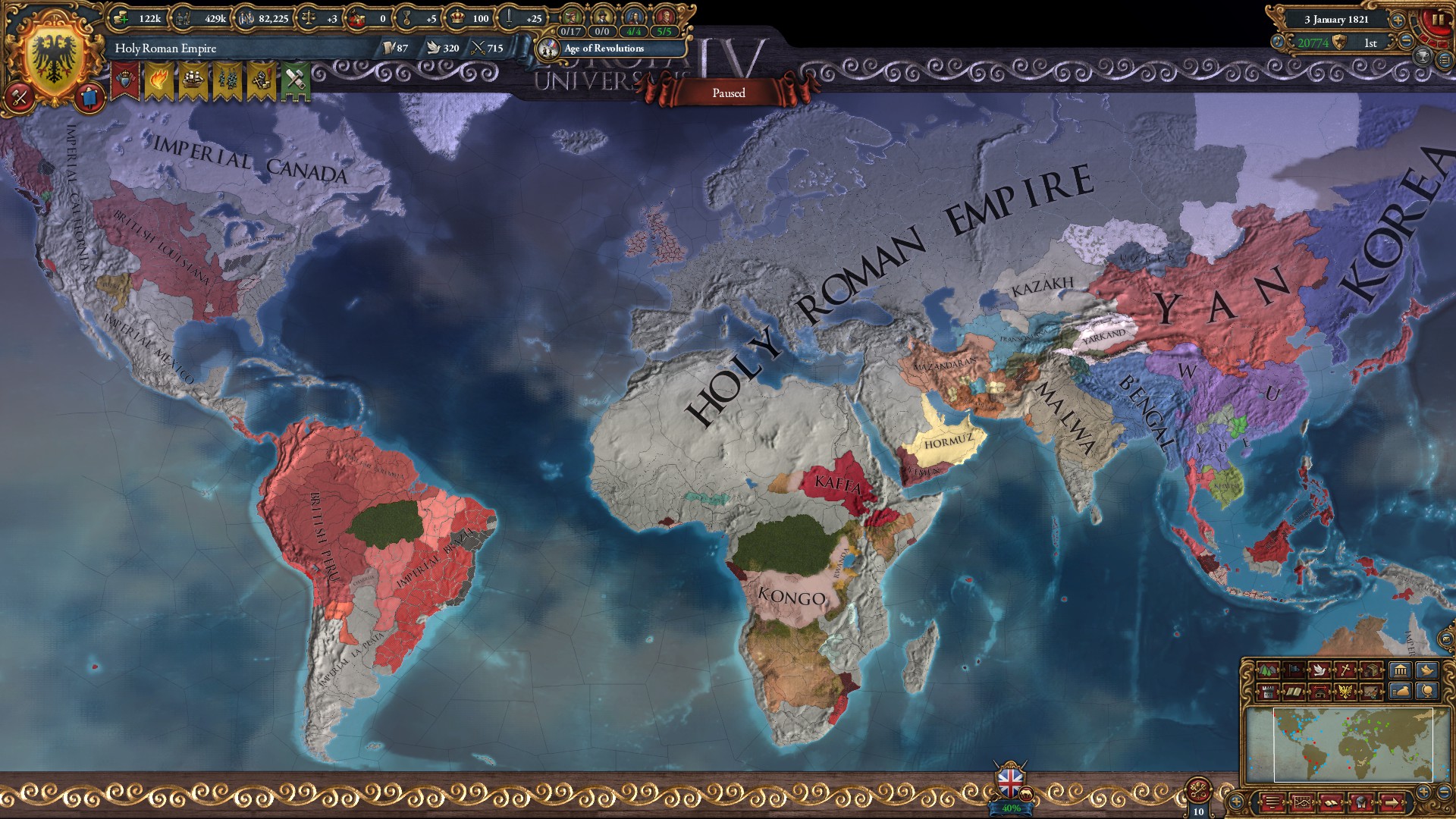 I had hoped I could blitz the channel with a massive fleet, but it turned out being much trickier to get around the Royal Navy. If I'd gotten across easier I might've been able to finish the war without extending the end date. 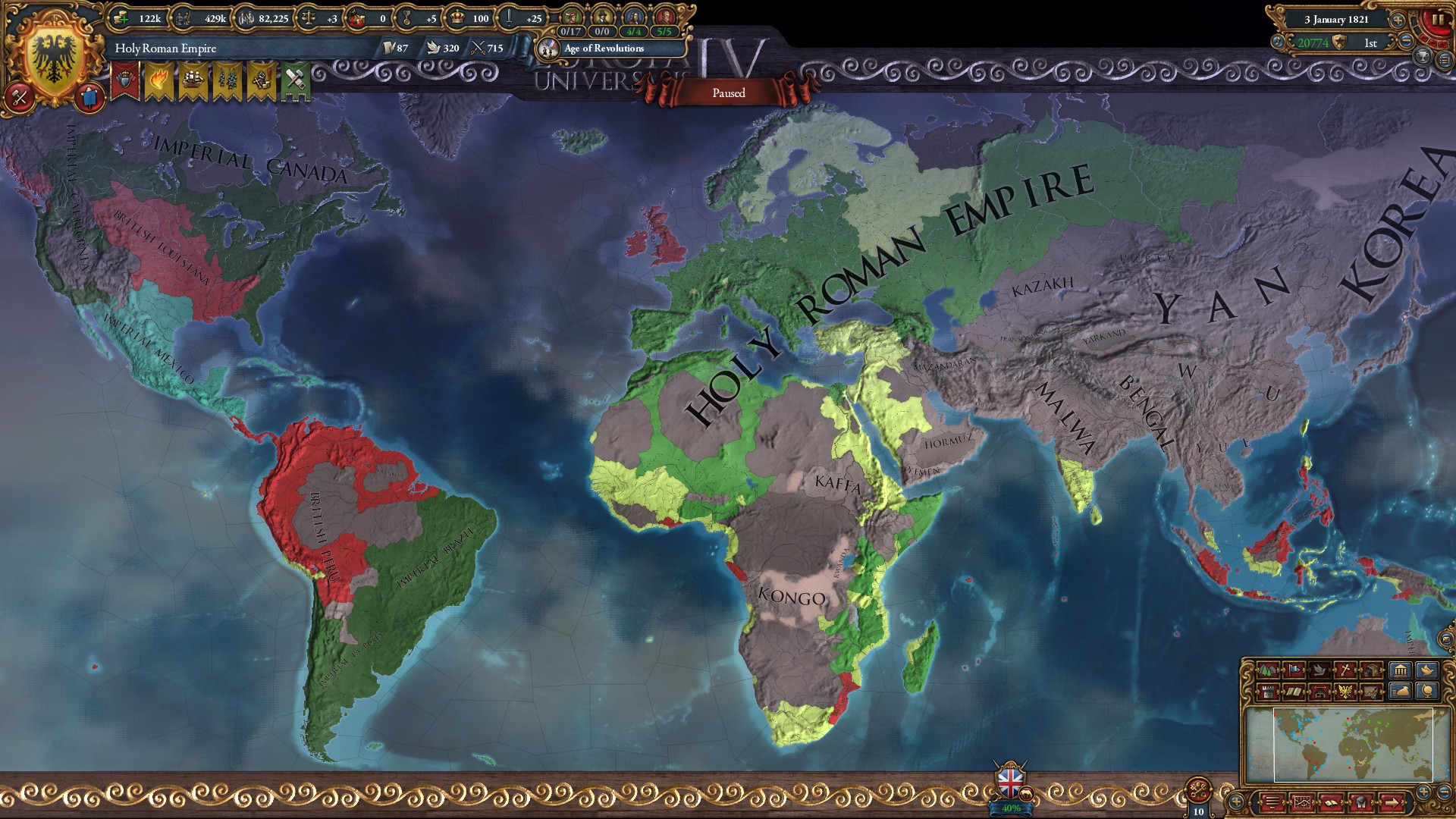 Religious map. Protestantism? Oh, you mean that heresy we stamped out a century or two ago? 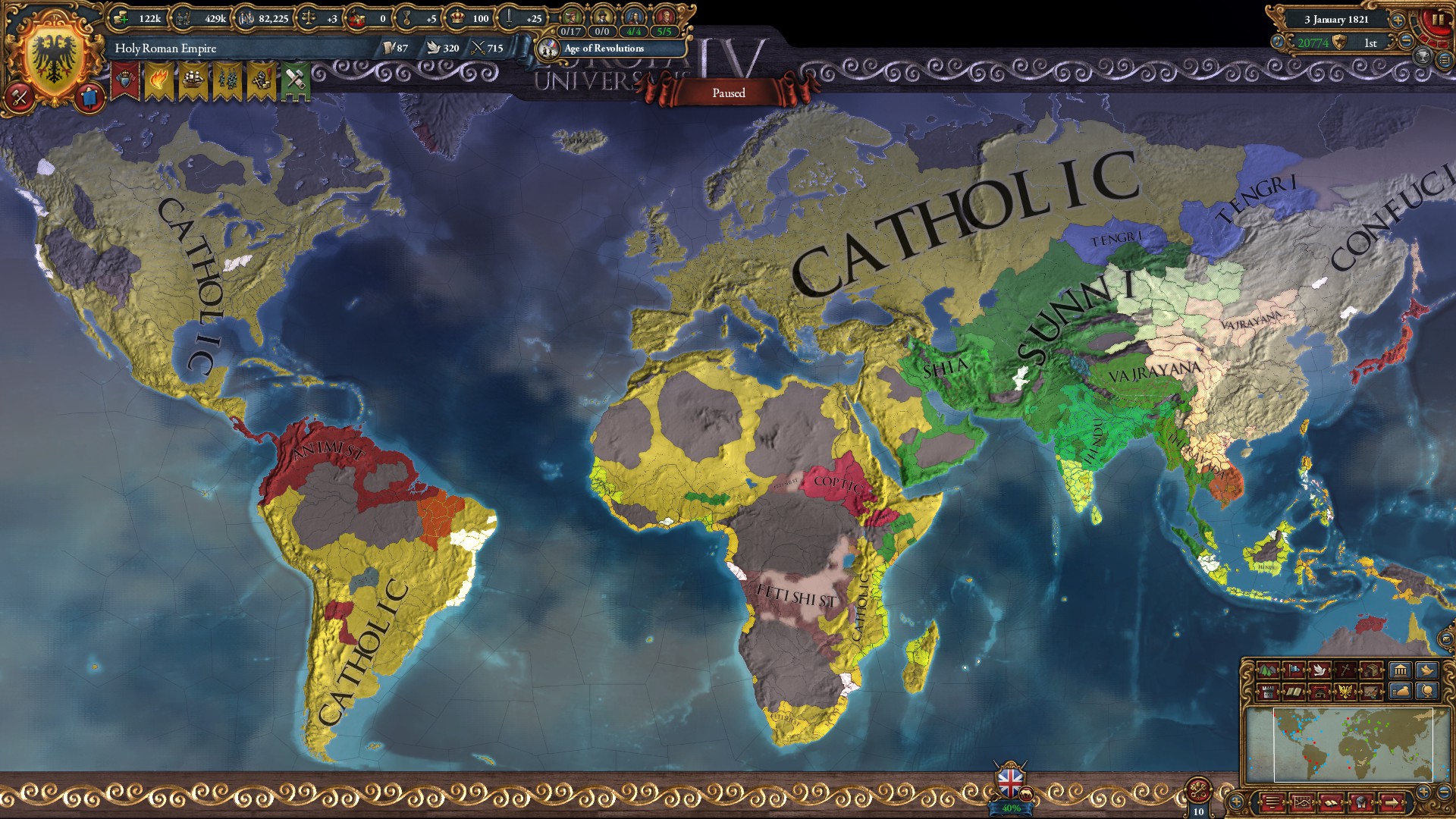 I extended the end date, and managed to win the war to enforce the union over GB. Then I cleaned up the last couple of native countries in the Americas, as well as some of the tags that broke free from Britain while I was busy subjugating them. With all of Europe and the Americas under my control, I decided to call the campaign done. 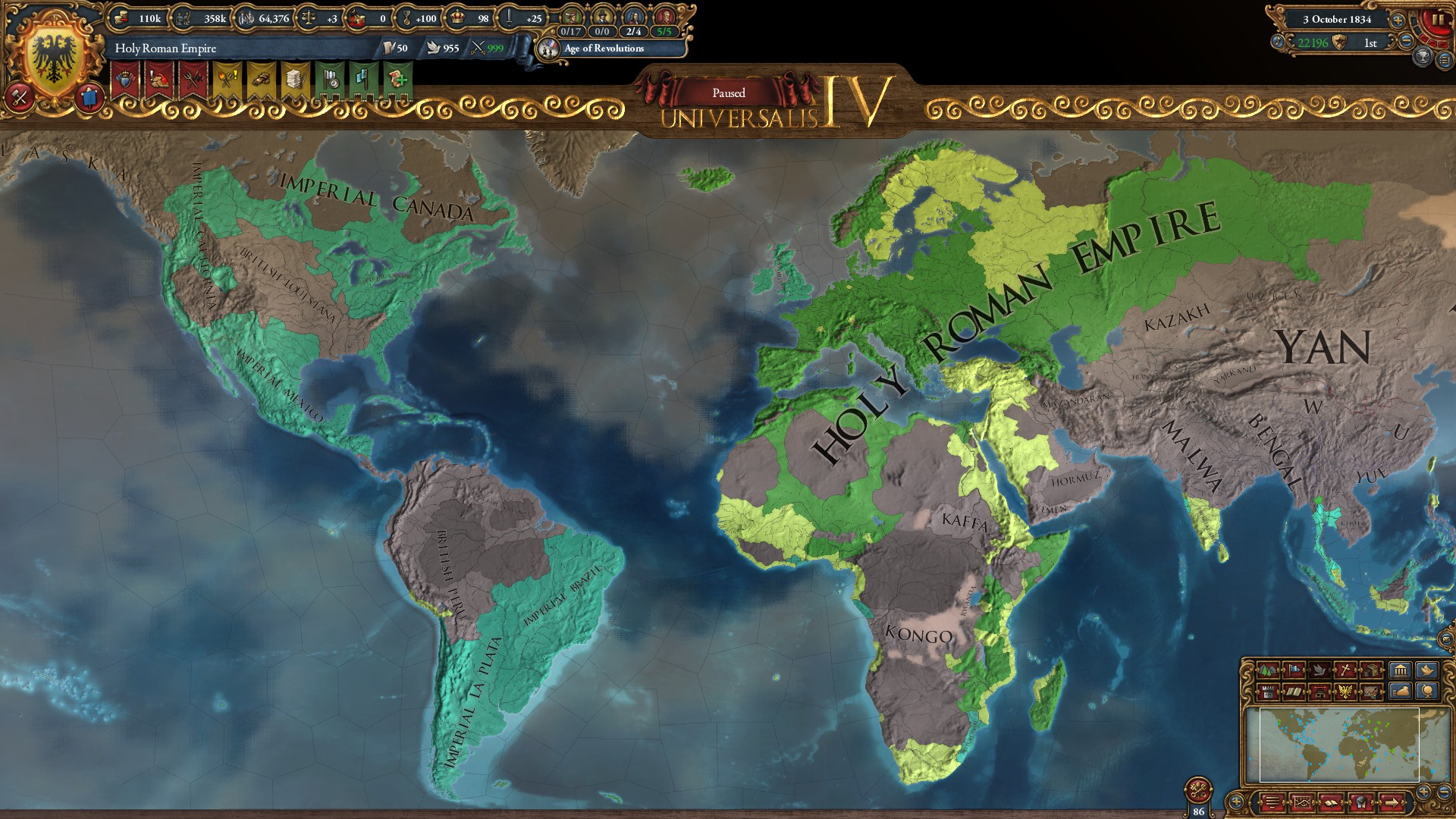 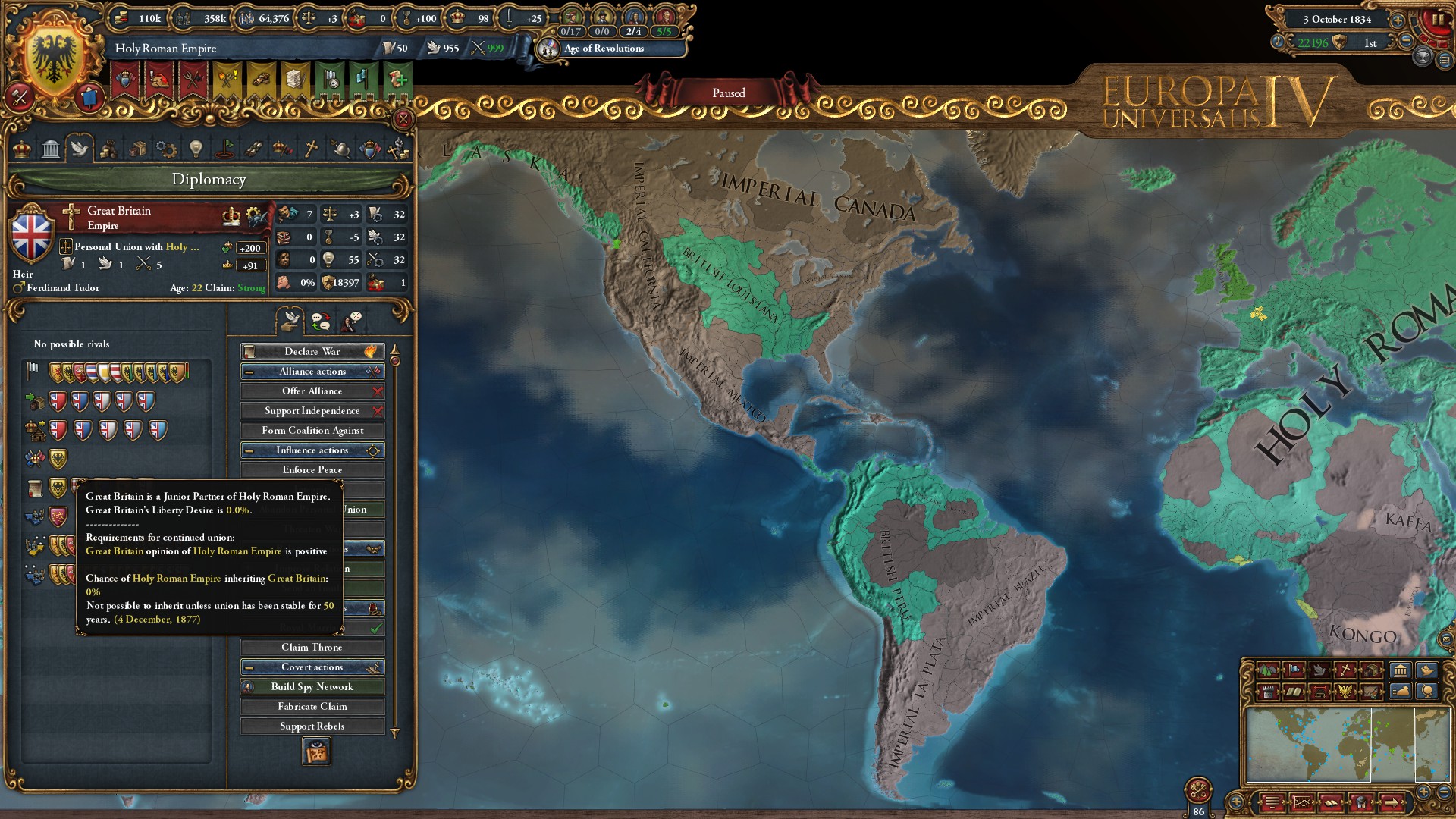 This was an incredibly fun run, I had a great time with the vassal swarm of a revoked HRE. Keeping the princes in line and managing IA got a little annoying at times, but overall it wasn't as much of a hassle as I expected--and I don't think I ever had to defend a prince from an outside attack.

As a bonus, this is always a nice screen to see: 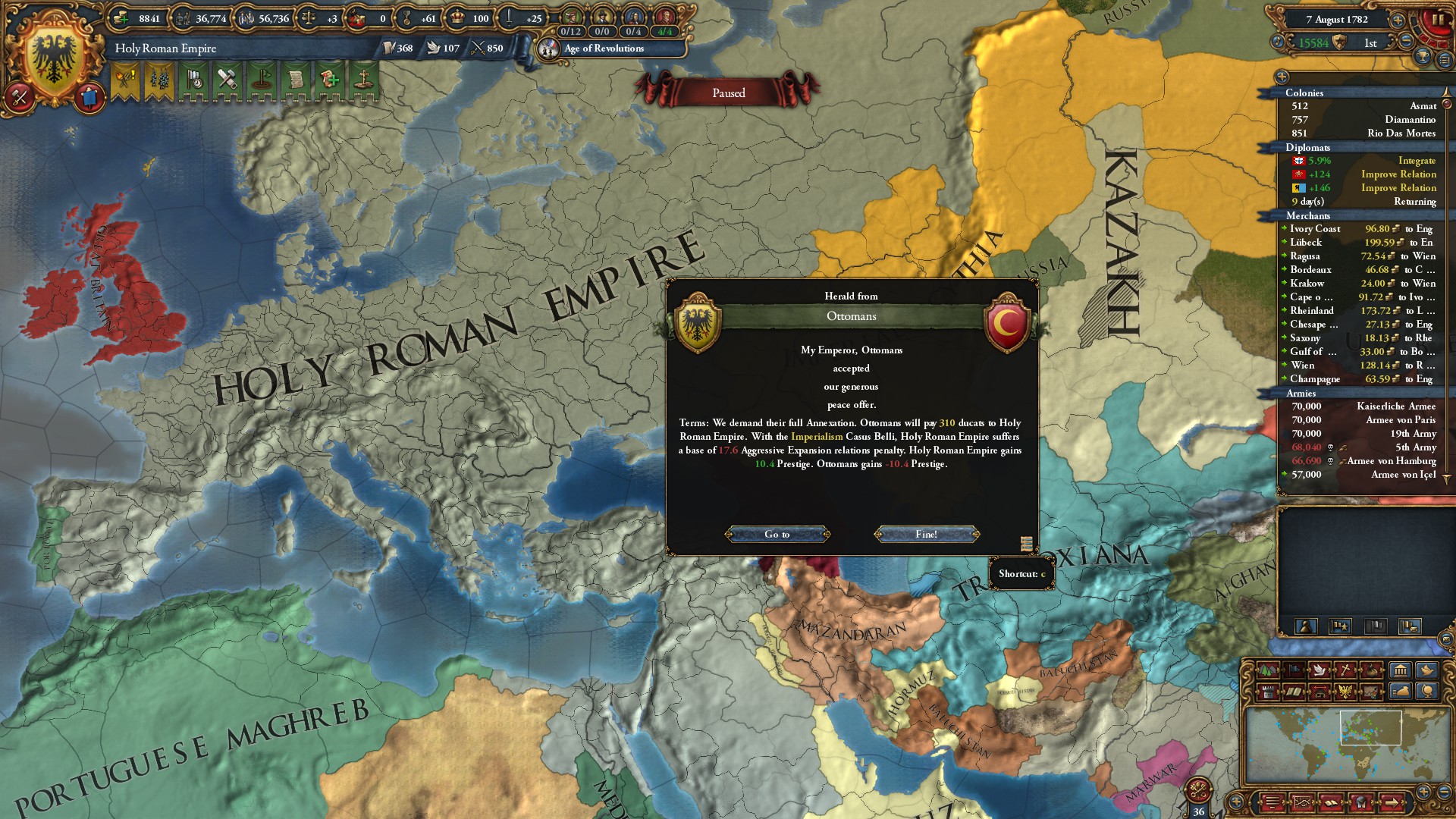 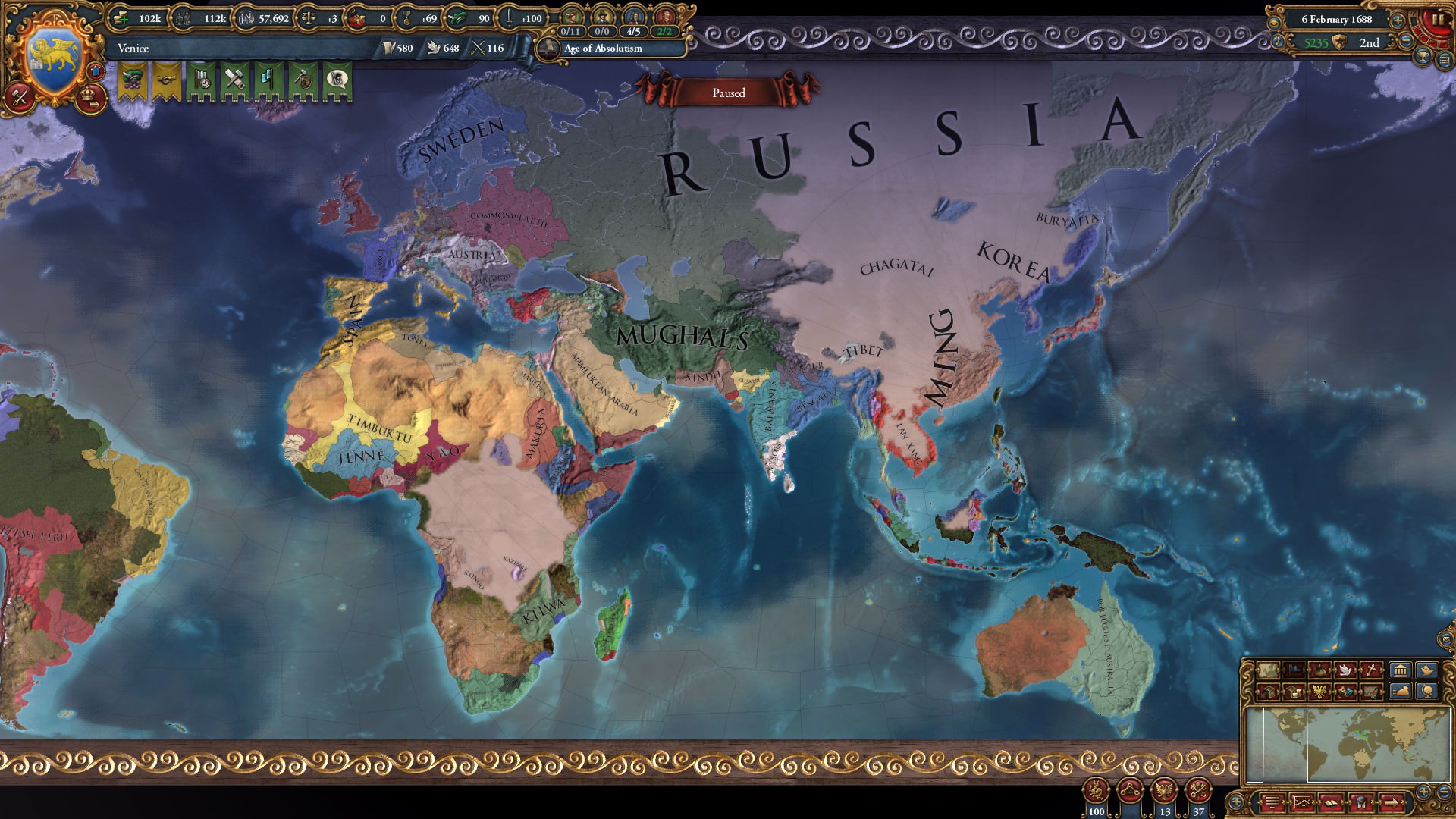 Currently number 2 great power whilst being barely visible on the map. Didn't want to take exploration so being able to buy trade company provinces was pretty useful for once as its allowed me to grab territory in Malacca. Also a game where building the Suez canal would be particularly useful.

Sadly I dont have any screenshots of the progress. But here is my first world conquest.

Started as the Great Horde, quickly conquered the hordes around me and beat Muscovy in 1480s something. Reformed to the Golden Horde and used vassals to keep growing while balancing the state/territories corruption and moving through Persia towards India. Around 1520 I hit India and focused my expansion in to trade company areas. After some wars with Ming I reformed the Mongol Empire.

The last 2 contries I conquered were native american opms that I hadn't discovered and I had to take exploration ideas just to find them. Though it was quite funny to see one digit opms as great powers.

rs2excelsior said:
Religious map. Protestantism? Oh, you mean that heresy we stamped out a century or two ago?
View attachment 415617
Click to expand...

The real gem is that Animist British Colombia though. United under the One True Pagan Faith

kdsw said:
The real gem is that Animist British Colombia though. United under the One True Pagan Faith
Click to expand...

...You know, I was so caught up in finally winning that war and that big, beautiful yellow Europe that I didn't even notice that. I honestly don't know how or when that happened. Maybe rebel demands over the course of our war? I'm honestly not sure.
B

Here are my two campaigns since Dharma: 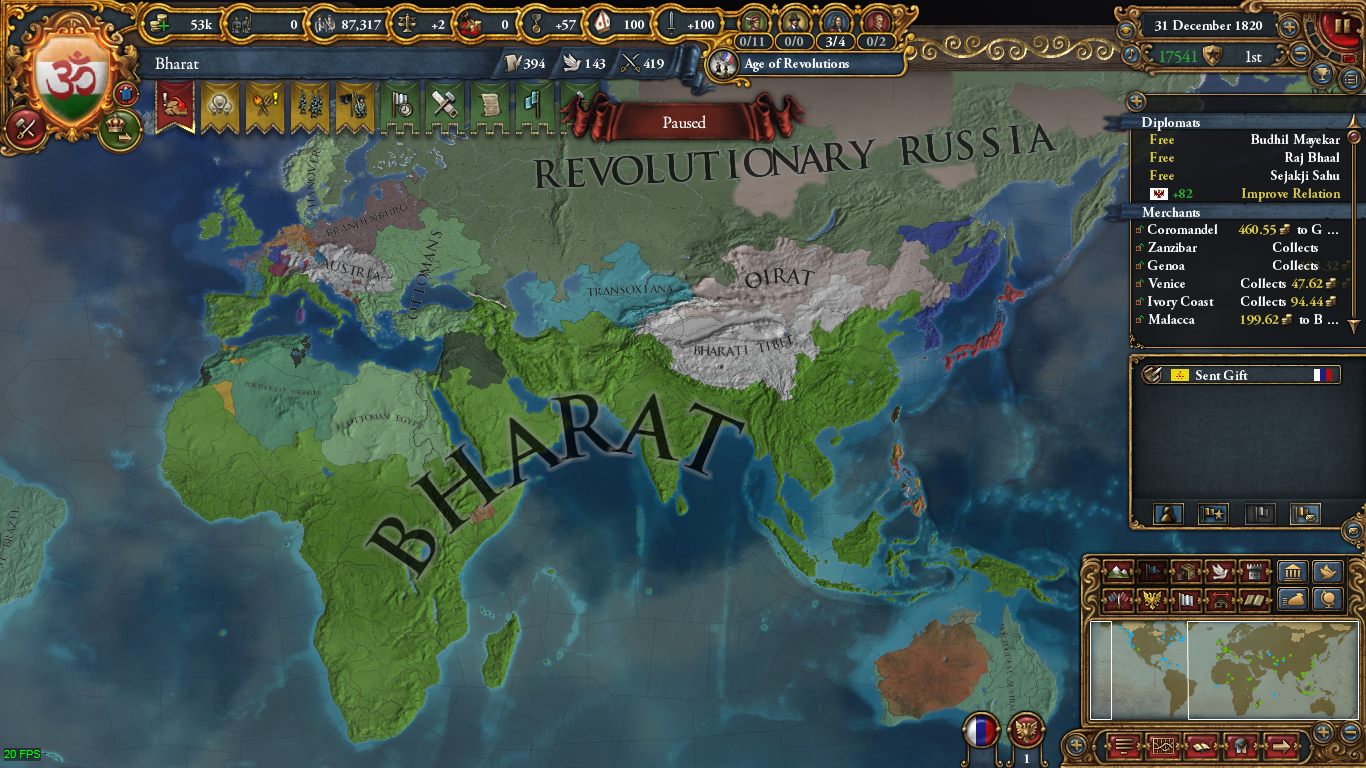 Bharati Tibet, Bharati Mashriq, Gascony and Normandy are my vassals. I went for The Sun never sets on the Indian Empire" and the new Mewar achievements specifically, but I managed to get seven or eight in total. 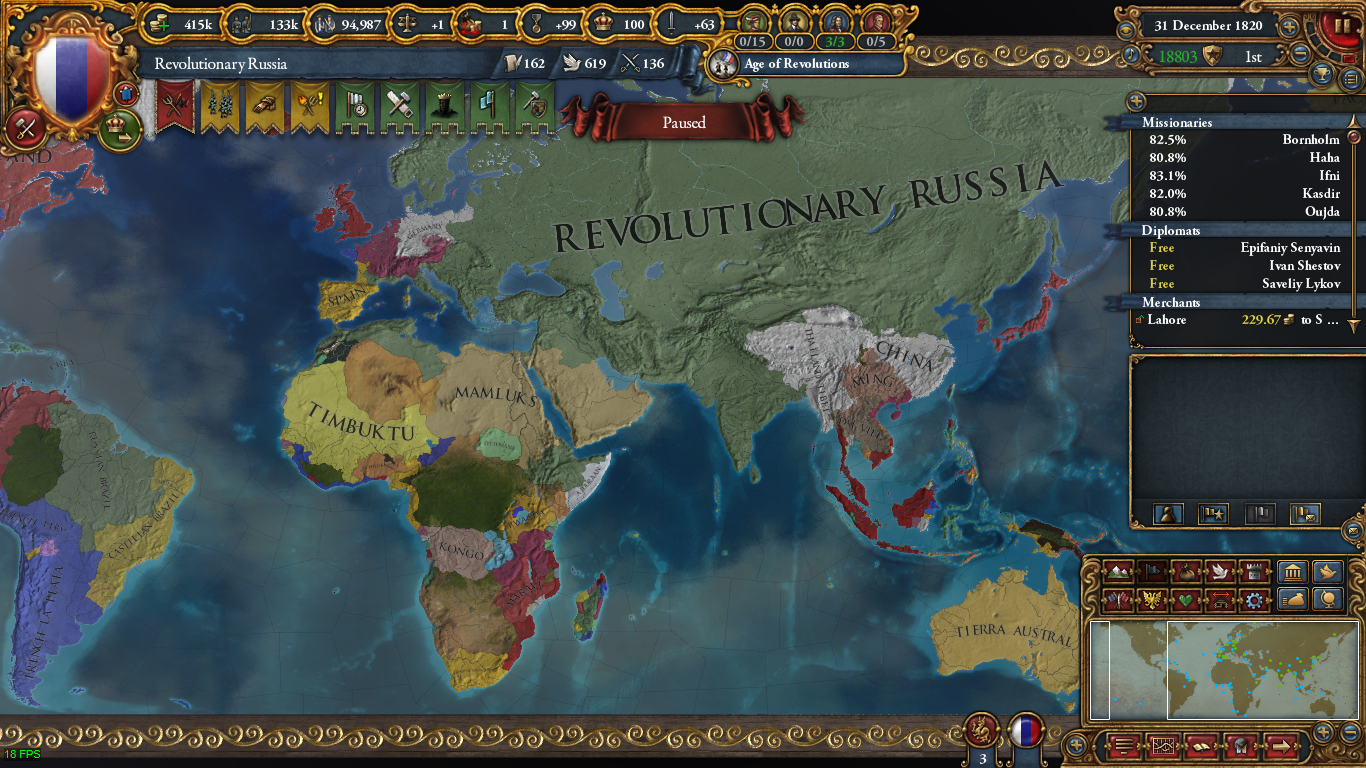 Thailand-Tibet, China, Germany and the Mamluks are my Vassals and Spain and Burgundy are my PUs. I actually managed to claim the throne of Portugal in 1814 or so, but for some reason I did not get the CB to enforce the PU. I'm actually very surprised that it turned out so well. Until 1600 I was drowning in debt, was 4 techs behind in admin and diplo and hadn't even finished my third idea group. It picked up after I got the "Talented and Ambitious Daughter" event, giving me a 6/6/6 heir (who fortunately lived until her 60-70s) and after I was able to consolidate Persia and go into India.
I have to confess, however, that I savescummed three times, although, in hindsight, it didn't help me at all.
Here I also have a picture of the achievements I earned, bringing my count to 126 of 285.

Toggle signature
I tend to overclarify and/or create walls of text trying to explain my point without being able to do so adequately.
If you are a victim of that tendency, please forgive me. 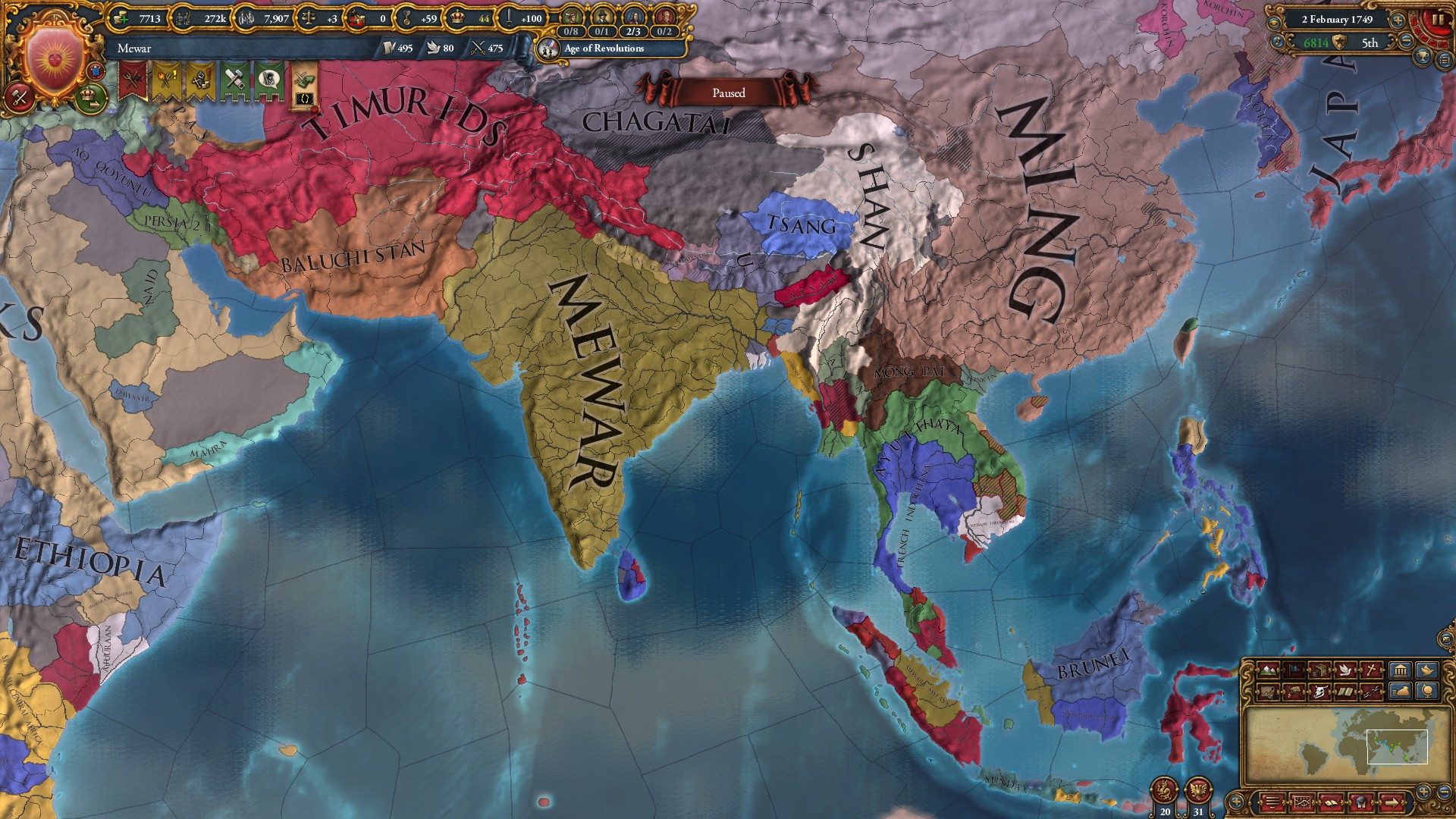 Baluchistan is my march, Persia 2.0 is a client state. 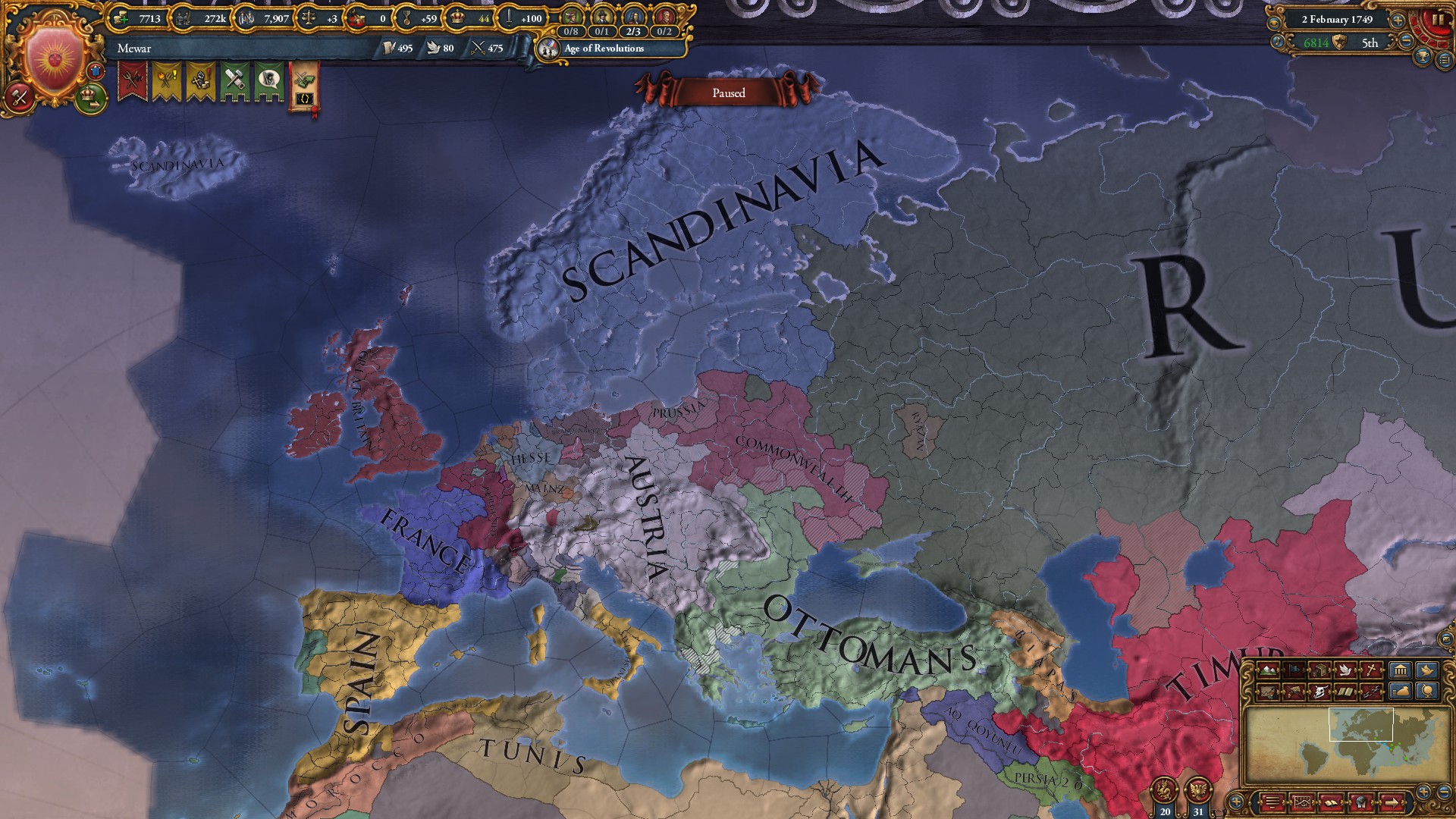 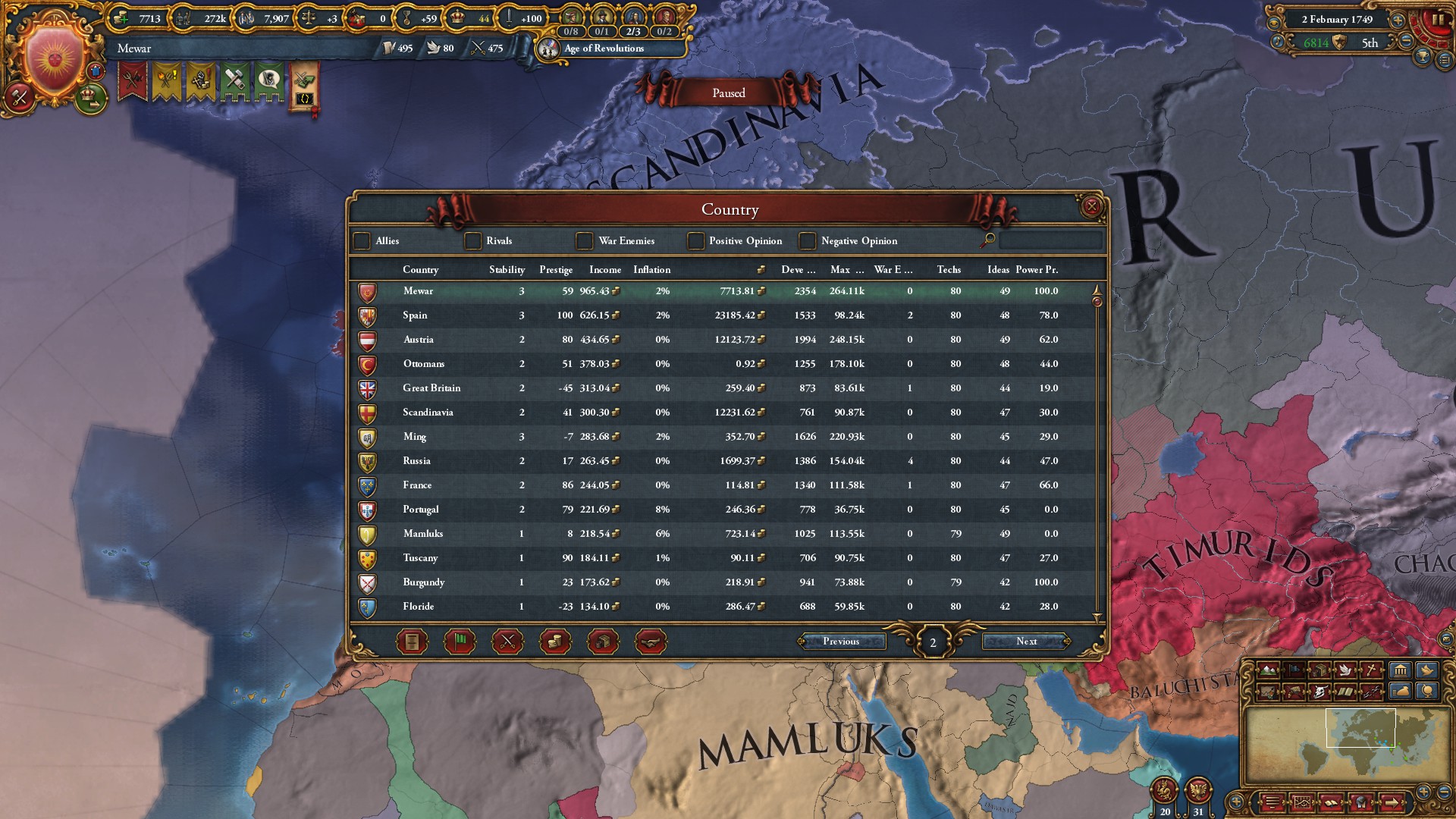 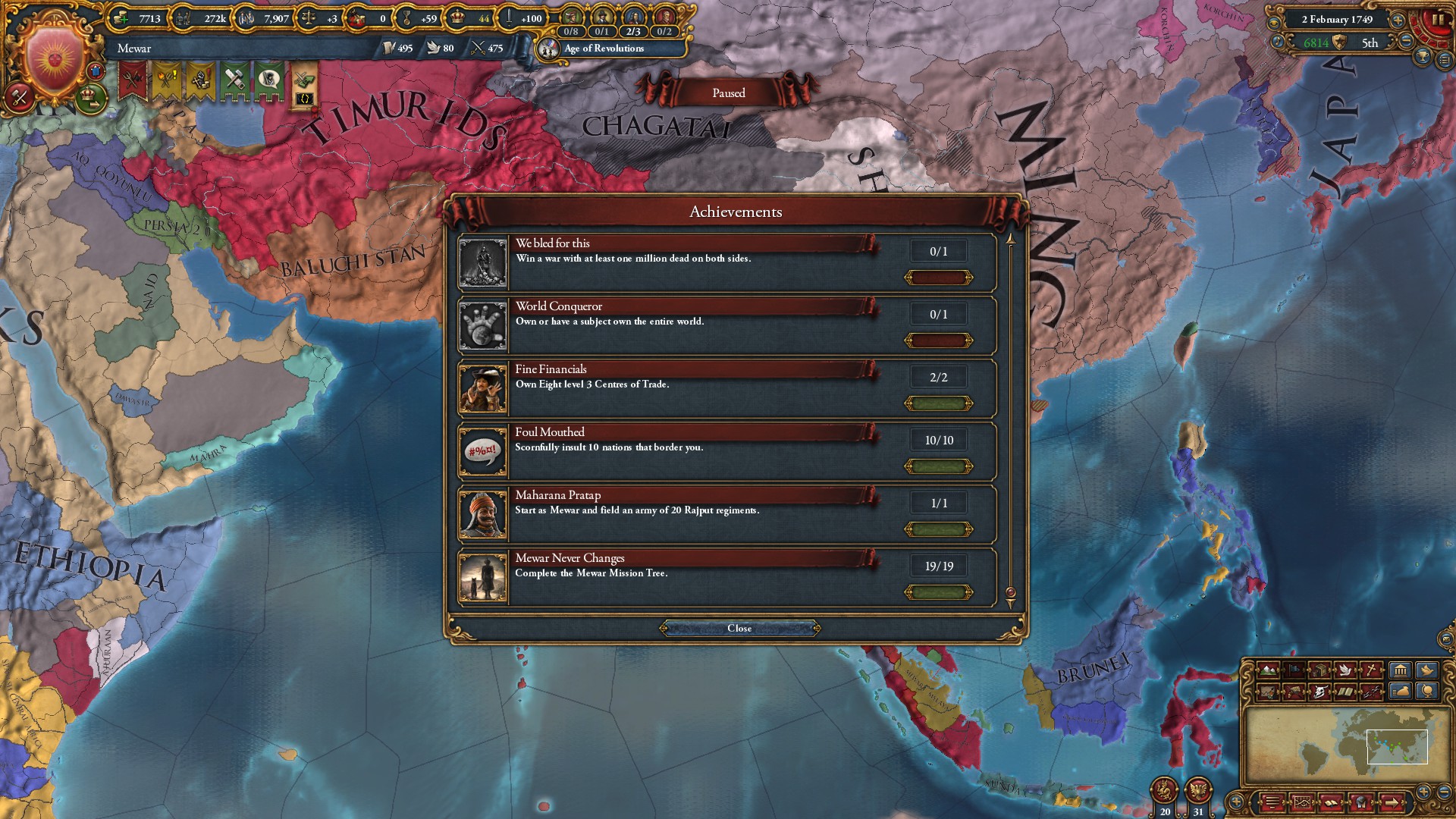 Here is what I called my Rushed Compact Switzerlake. With the numerous new provinces, it is now a lot easier to do a Switzerlake by just doing a snake towards low AE area in Eastern Europe. Instead, I decided to keep it central around the HRE. I also did not take any coastal province to later on release them or anything of the like. Just raw conquest of inland provinces making pretty realistic borders. 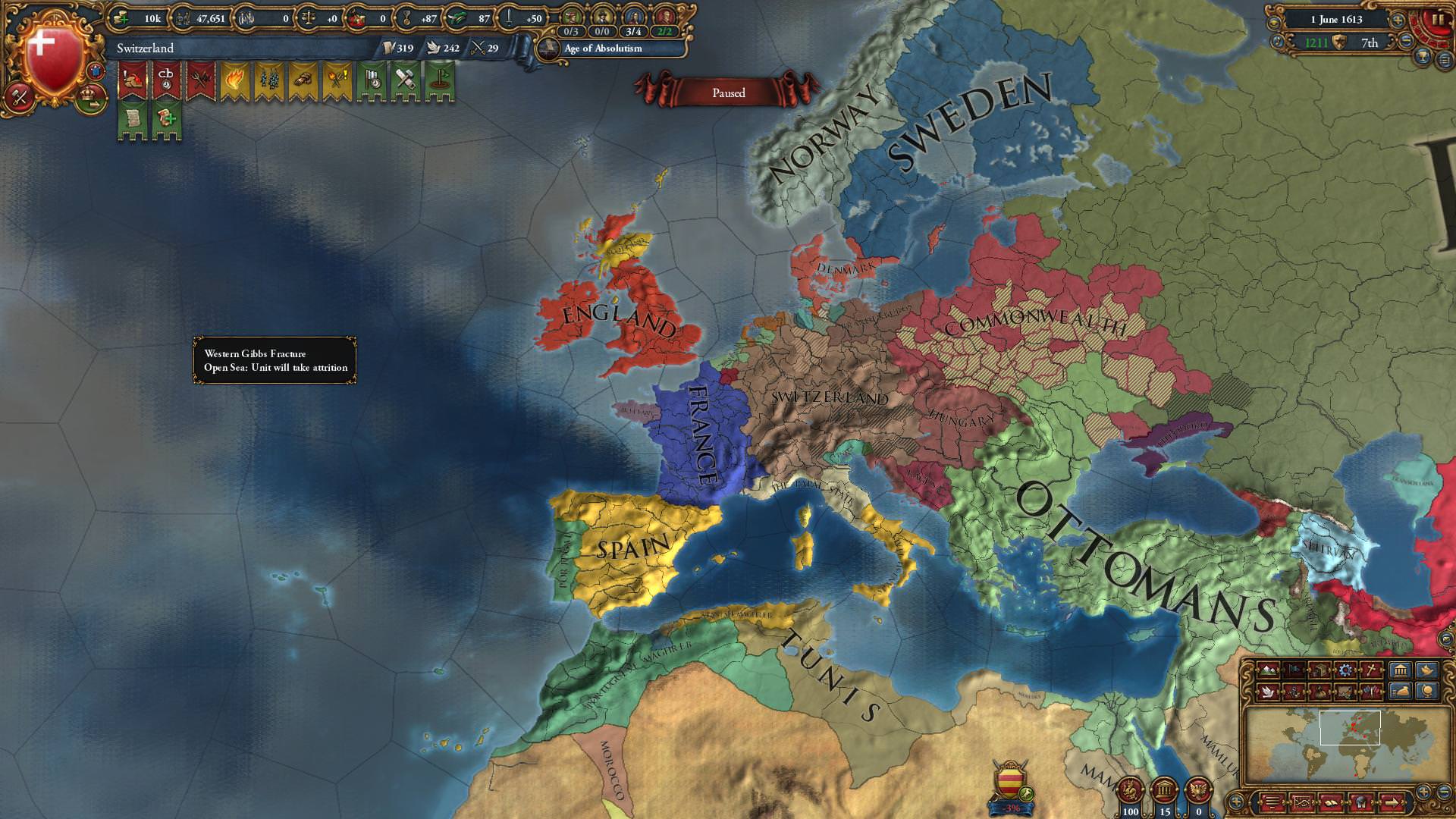 I wish I could have done it before the Age of Absolutism, but 1613 is early enough. The country is about to explode, I have near 300% OE.

The real beautiful map is this one imo: 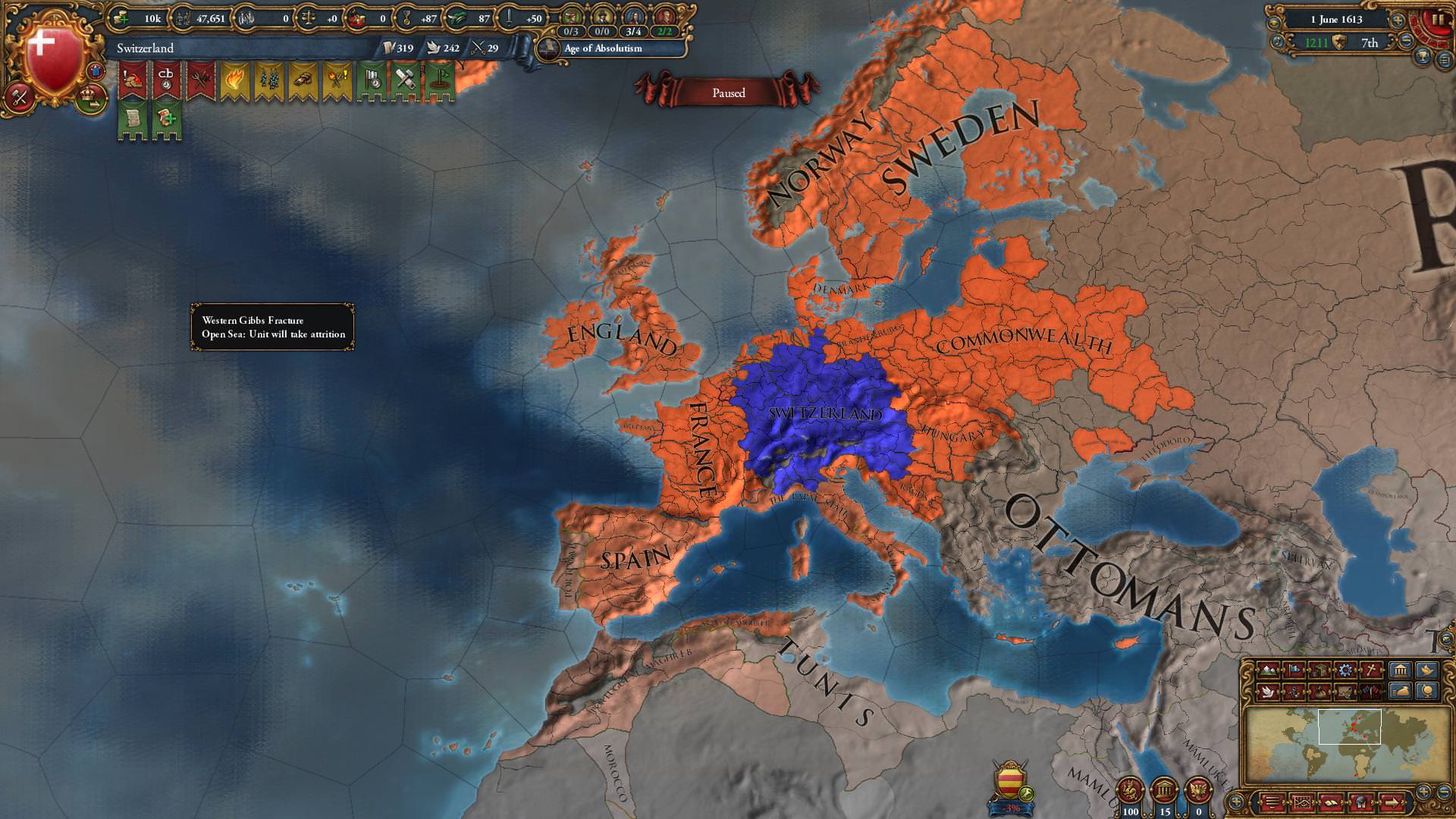 Everything is under control. I attacked 3 times into the coalition to dissolve it. Fighting hundreds of thousands of men that early is a lot of fun.

Republics are now extemely strong, Dharma really saved them. I ran Plutocratic Diplomatic and Economic for cheaper reelections and RT/year policies, and I have the RT/year government reform, meaning I almost don't lose RT by permanently reelecting. I was basically running on infinite monarch points. The lower absolutism cap is irrelevant if you finish your run before the Age of Absolutism.
Toggle signature
Back to the forums.

Marshal of the Soviet Union

Nice empire, who did you start as etc?
Toggle signature
Strategy is the second casualty of any conflict, right after the truth.
Admiral Tirpitz on why Germany needs a fleet, 1919

AARs:
Invincible and Legendary - The Red Army during the Great Patriottic War - Awarded Weekly AAR Showcase 6-2-'16
The Vanguard of the World's Destruction. - A Nationalist China-Japan Coop AAR
See my Inkwell for completed AARs

Thanks ! I started as Timurids, took me centuries to eat India because of coalitions but it went smooth anyway !

Transylvania and Florence are my marshs, but they're small and cute.
Toggle signature
Making Vlad "Dracula" Tepes proud since 1444 : Wallachia can into Europe

Poland start in 1.27 for first time, used danzig to take over teutonic knights easy and fulfilled hungary PU and bohemia PU missions. Novgorod, brandenburg are vassals and france, denmark are allies. Denmark never lost PUs and i allied them to stop russia from doing it. Protestants won war, austria was all of lowlands, switzerland, baden, and were just rolling over everyone until i dropped alliance so i could PU bohemia 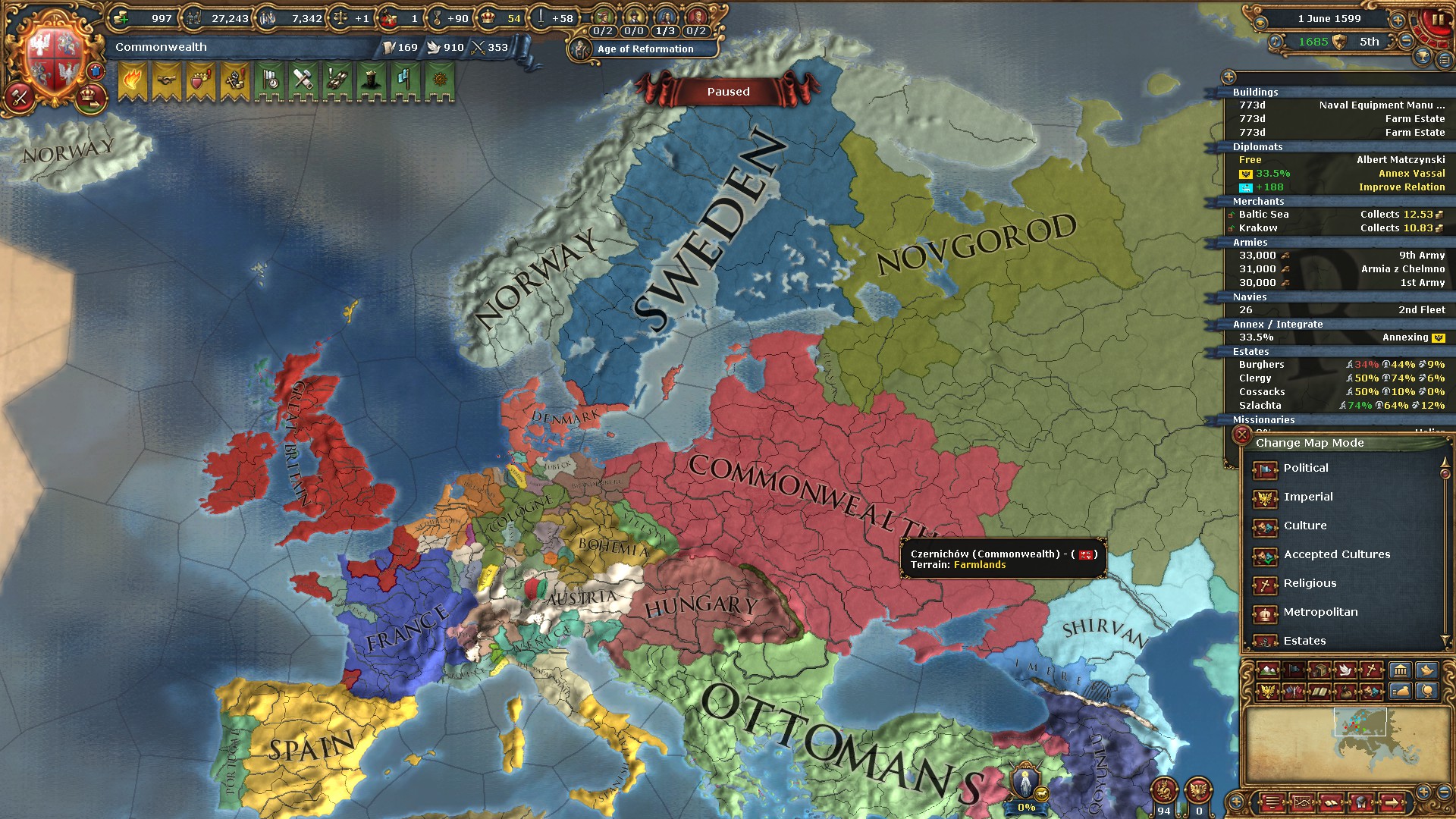