Menu
Install the app
You are using an out of date browser. It may not display this or other websites correctly.
You should upgrade or use an alternative browser.
Europa Universalis IV 76242 EUIV: Suggestions 16275 EUIV: Technical Support 5812 EUIV: FAQ & Strategy Guides 193 EUIV: AAR's, Let's Plays, and Fan Fiction EU IV: Alternate History Short Story Contest Contr 26
Show only dev responses
D

Sousuke123 said:
First attempt and i guess it wen pretty well though not so huge like others Theodoro. I thought I'll get revolution was crushed achievement since France got Revolution but still no luck. Nice! Smart to go Sunni. I'm assuming you allied yourself with Ottomans?

Unioned Austria at start, got both Burgundian inhertiences, and now this.

FRANCE WILL RULE THE WORLD! I helped Poland and Lithuania eat the Ottomans, but mega-Scandinavia happened on its own. I managed to keep my colonies all under 50% Liberty Desire until around 1795 when it got too overwhelming. I almost didn't get the Iberian Wedding because my king lived so damn long. Yes and we are in love since 1470. Longest alliance I've ever had in game.
Reactions:

When's the wedding going to be?
Toggle signature
Son, let me tell you how the world works.

Lord_P said:
When's the wedding going to be?
Click to expand...

Unioned Austria at start, got both Burgundian inhertiences, and now this.

FRANCE WILL RULE THE WORLD!

This is TOTAL LUCK.

If it had happened in history, people would have expcted from this Trastamara Emperor to recreate the Roman Empire.

Since that'd be too easy for you, we expect a WC.
Toggle signature
Goodbye CK2! My endgame screenshots for all sixteen Monarch Journeys, with brief commentary (micro-AARs). 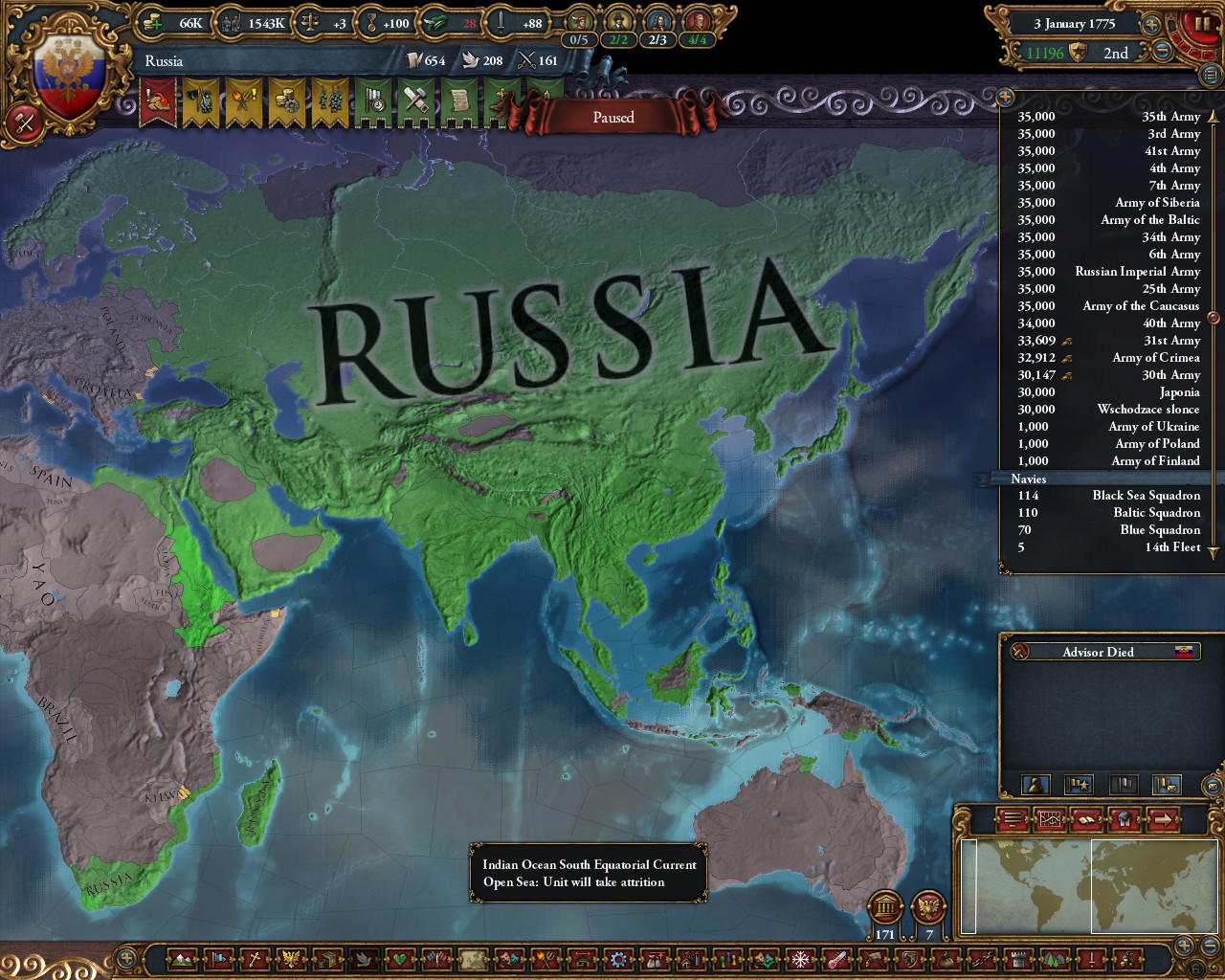 All belongs to the mother russia ;p
Ming vassal in early game makes a difference
Reactions:

Thats an impressive Großdeutschland! Bigger and better than what i usually can manage. But untouched netherlands? Where is your dominated end-tradenode?!

Sinikko said:
Thats an impressive Großdeutschland! Bigger and better than what i usually can manage. But untouched netherlands? Where is your dominated end-tradenode?!
Click to expand...

No true EU player ever wants to do the Dutch harm, they're a rare breed that must be protected (in game, anyway)
Toggle signature
Victorious warriors win first and then go to war, while defeated warriors go to war first and then seek to win.
Sun Tzu

Sinikko said:
Thats an impressive Großdeutschland! Bigger and better than what i usually can manage. But untouched netherlands? Where is your dominated end-tradenode?!
Click to expand...

Yeah, I seriously couldn't do anything about the Dutch. Didn't want them as a vassal, it's all about full annexation . I was already ~230% overextended and I wasn't planning on releasing anything, so it would have broken my country.

Decided to post another one of my empires, this was right after WoN released. Mamluks->Super Egypt. Always attack those pesky Turks on day #1.

I really wanted to make some snazzy looking borders. Super Russia made it difficult but I managed. Also built the Suez Canal.

Became emperor in 1456, got full inheritance, and went on to wipe Islam off the map. 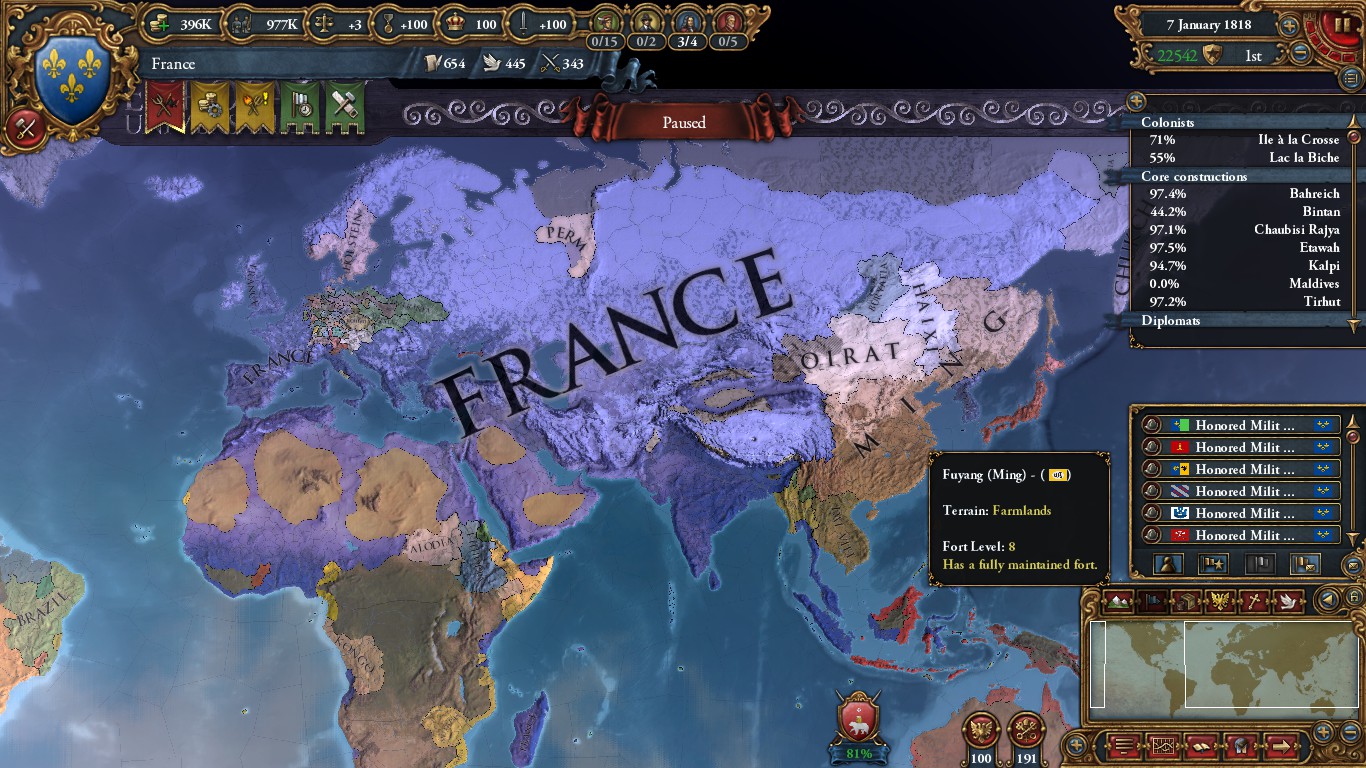 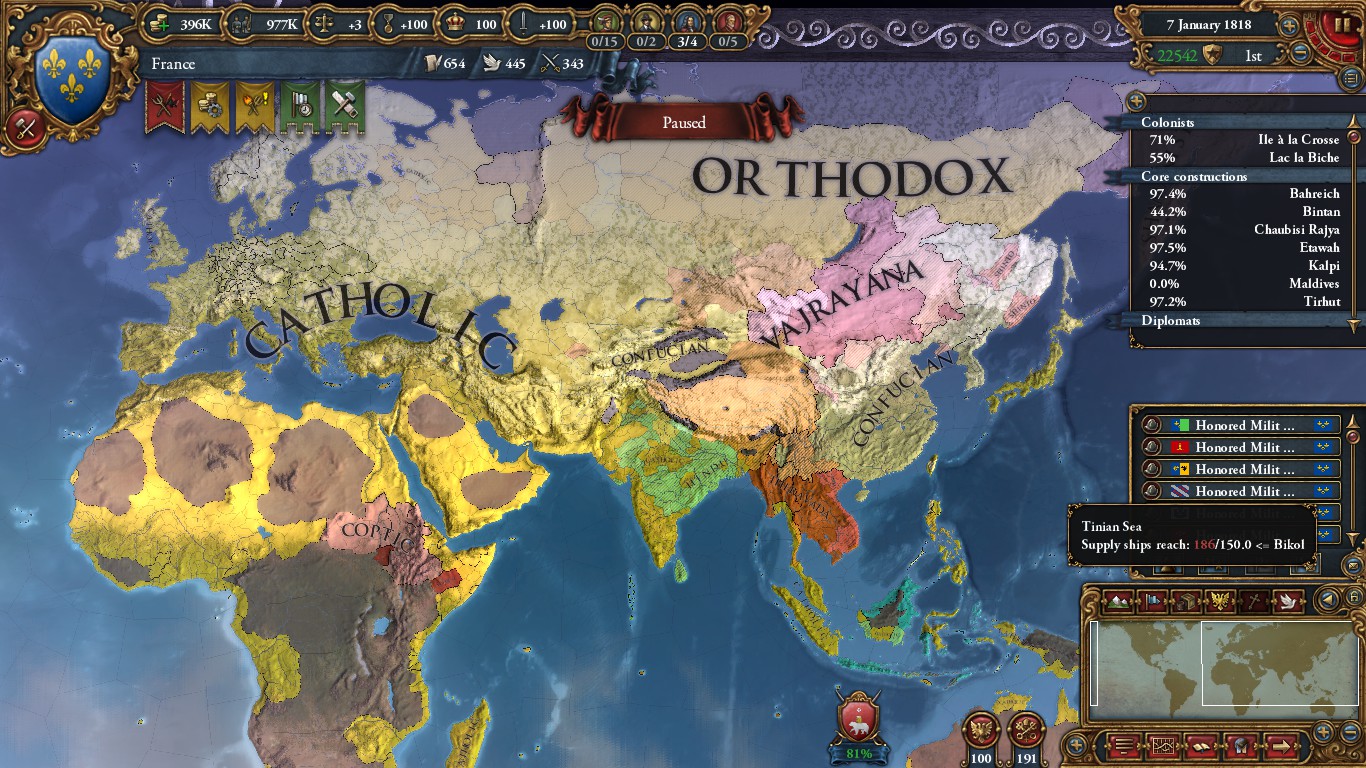 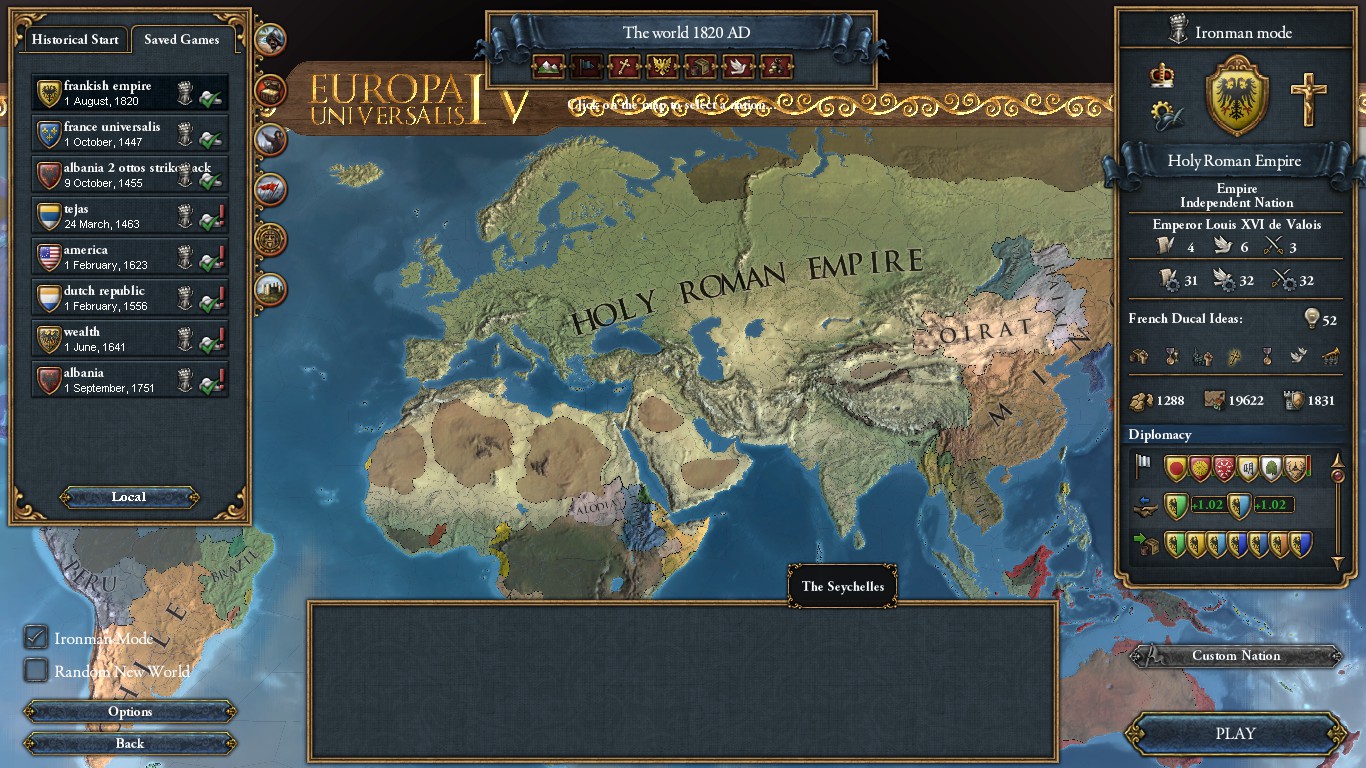 If it had happened in history, people would have expcted from this Trastamara Emperor to recreate the Roman Empire.

Since that'd be too easy for you, we expect a WC.
Click to expand...

This did happen IRL though, France got coalitioned and roflstomped

https://en.wikipedia.org/wiki/War_of_the_Spanish_Succession
Toggle signature
STILL WAITING for over 21 FPS in Hoi4 with a RTX 3090

I decided to do a Dutch campaign to finish off 1.13. After a few false starts with Burgundy, Friesland and Utrecht, I actually had a really good start with HOLLAND. It turns out that if attitudes are right, you can get France, Austria and England to back your independence. I also dismantled the Empire after the war of the Protestant League; Burgundy had force-migrated their capital to Namur and been made an Elector, which I decided was bothersome. France and Austria stayed my friends until very late-game, when France decided they wanted the Spice Islands... which I had just spent the last hundred years monopolising. Their mistake, since by that time I had an even higher force-limit than they did.

On this run I got Sinaasappel, World Discoverer, All Your Trade Are Belong To Us, Aggressive Expander, Market Control, Trade Hegemon, Four For Trade, Even Better Than Piet Heyn, and Colonial Management (I used to not play Ironman )

Also, for my personal goals, I had 100% land control in The Malaccas, Molucca, Siam and the Philippines and all the African Trade Companies; complete control in all Dutch, Flemish & Walloonian provinces, and all of Colonial Canada & Brazil. I'll be honest, Iceland and Canada happened just for something to do while waiting for Indonesia-related truces to expire. 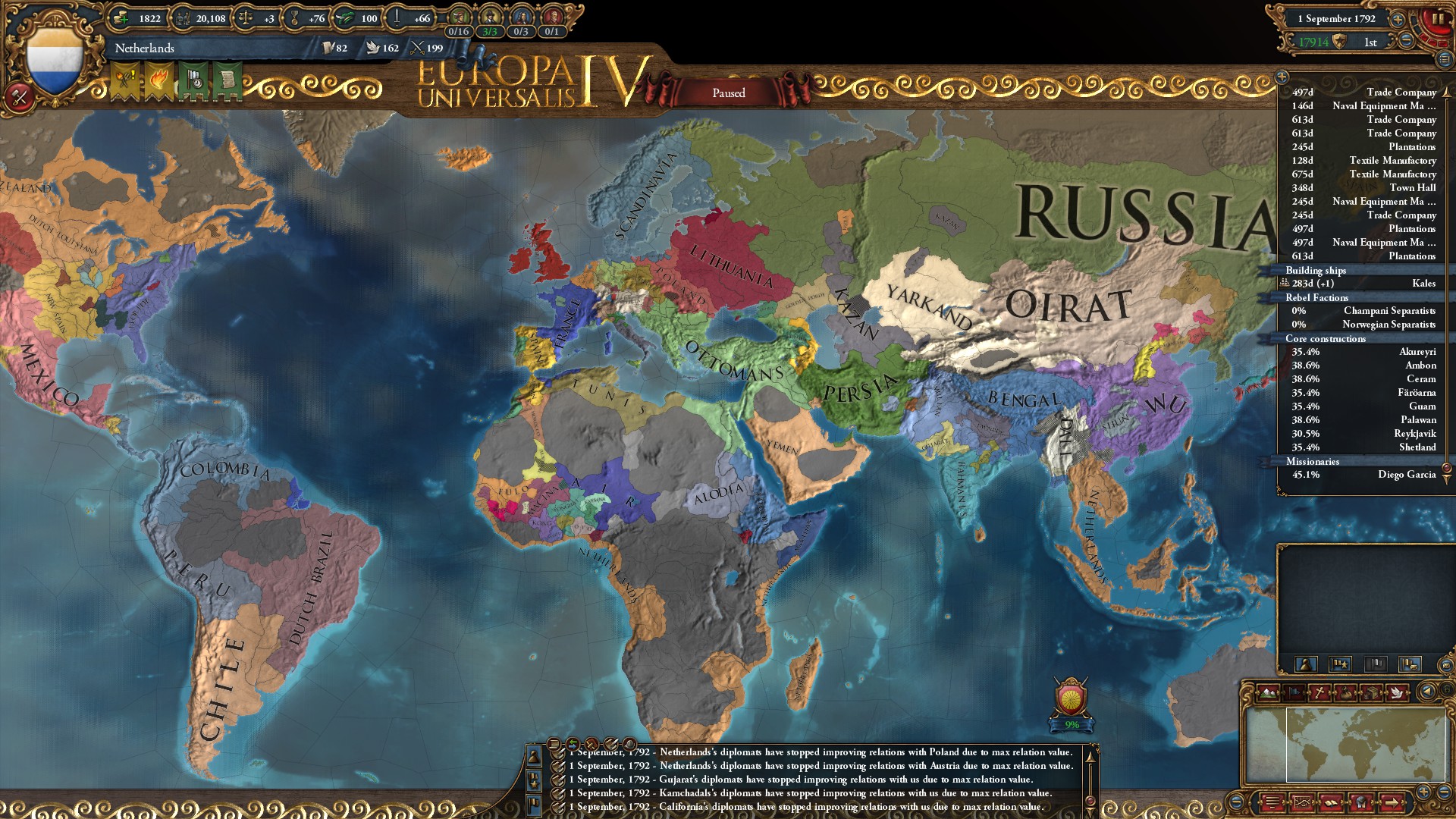 The Great Republic of Netherlands (Empire-rank Dutch Republics are awesome). 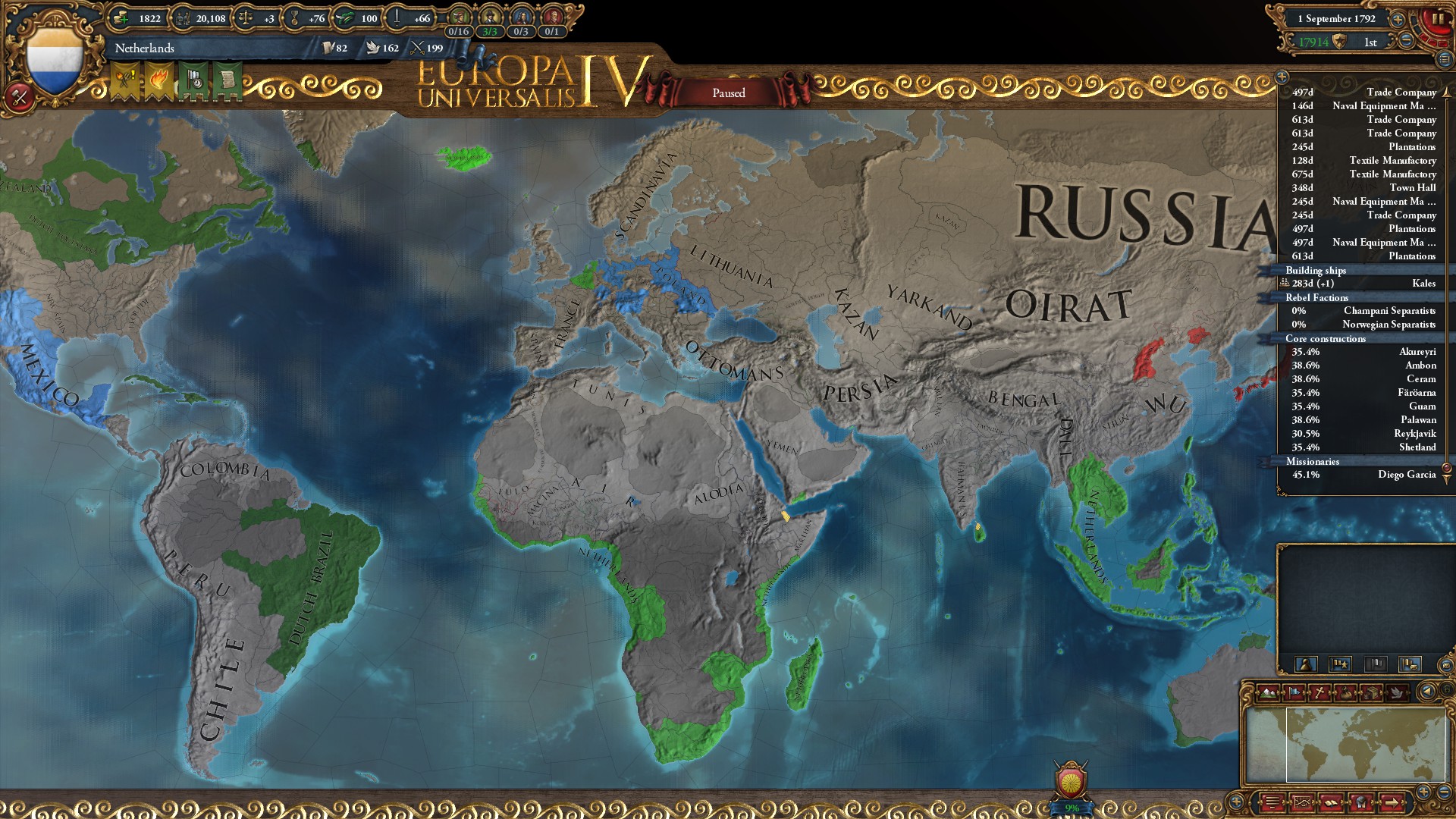 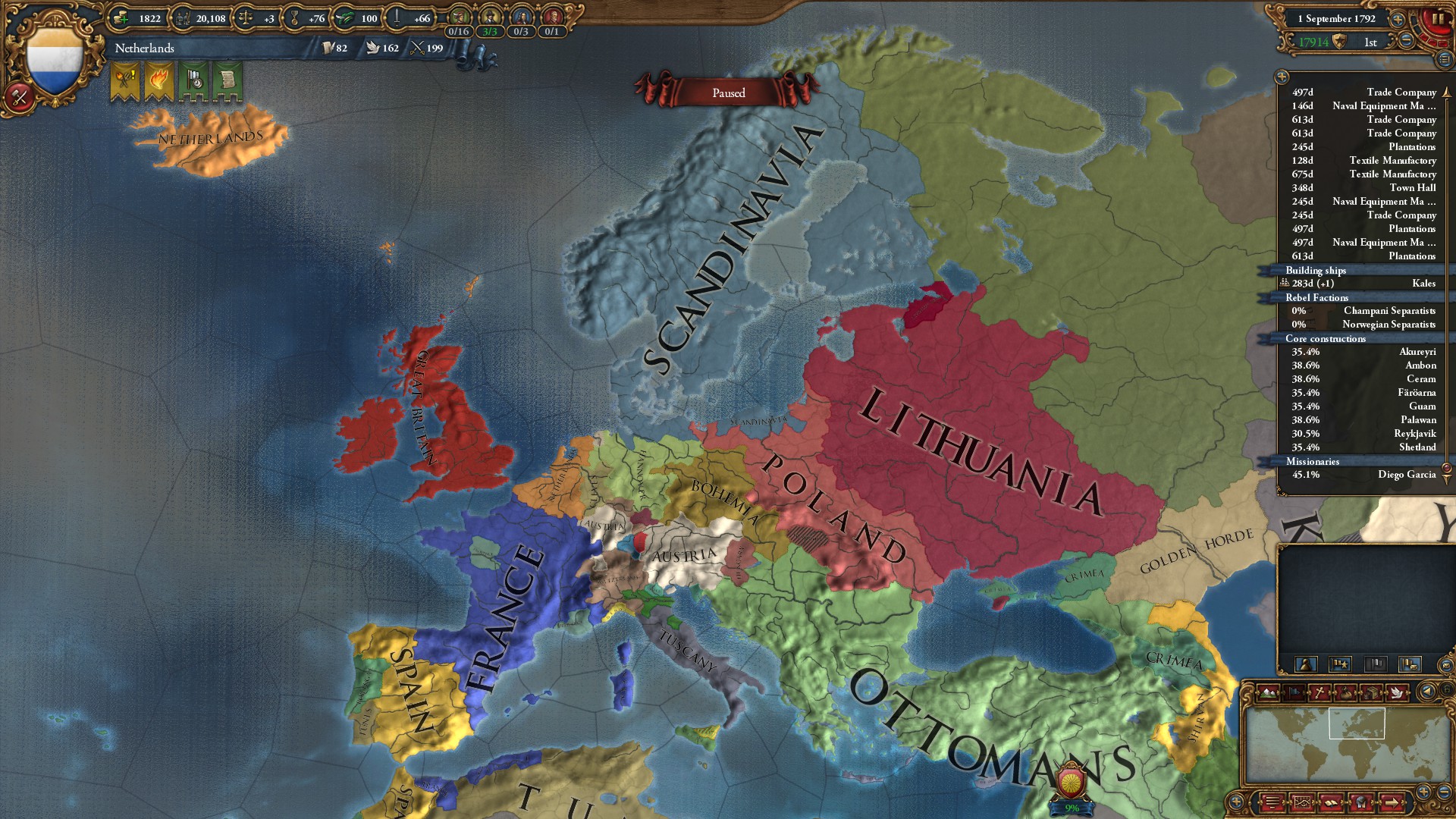 Europe family photo. Even after I made France spit some of Spain back out they're a total monster. 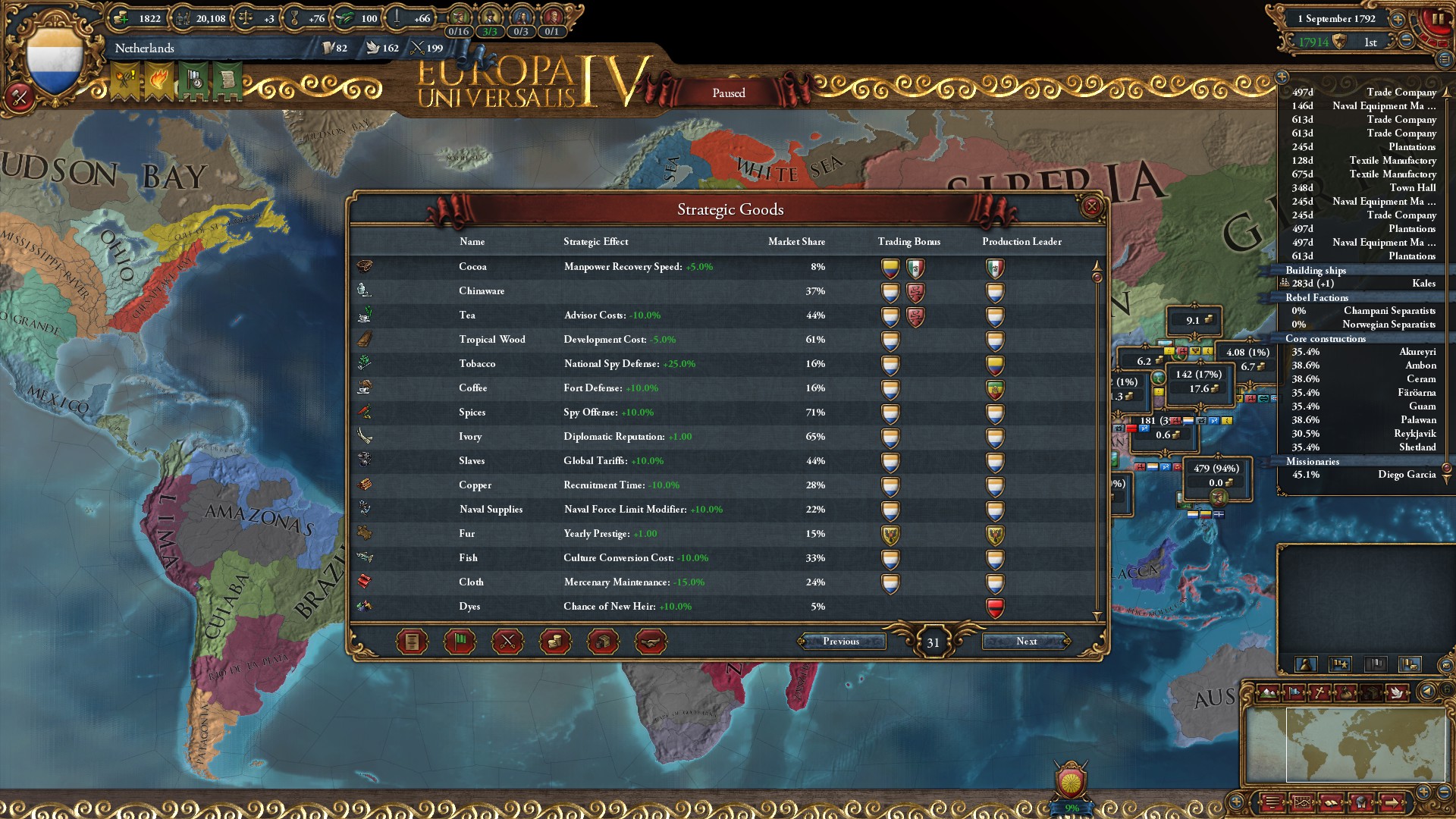 ALL THE TRADE BONUSES 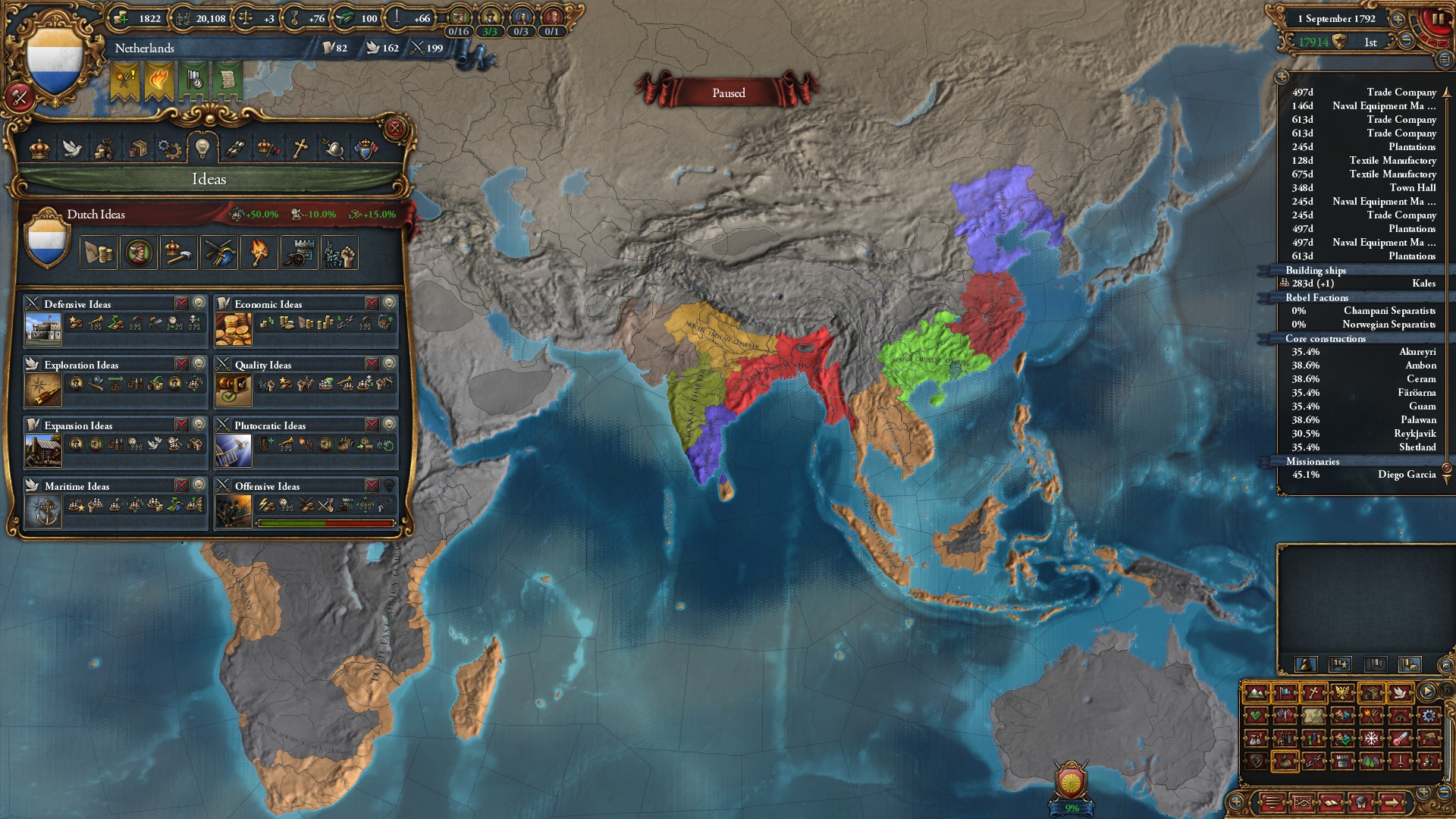 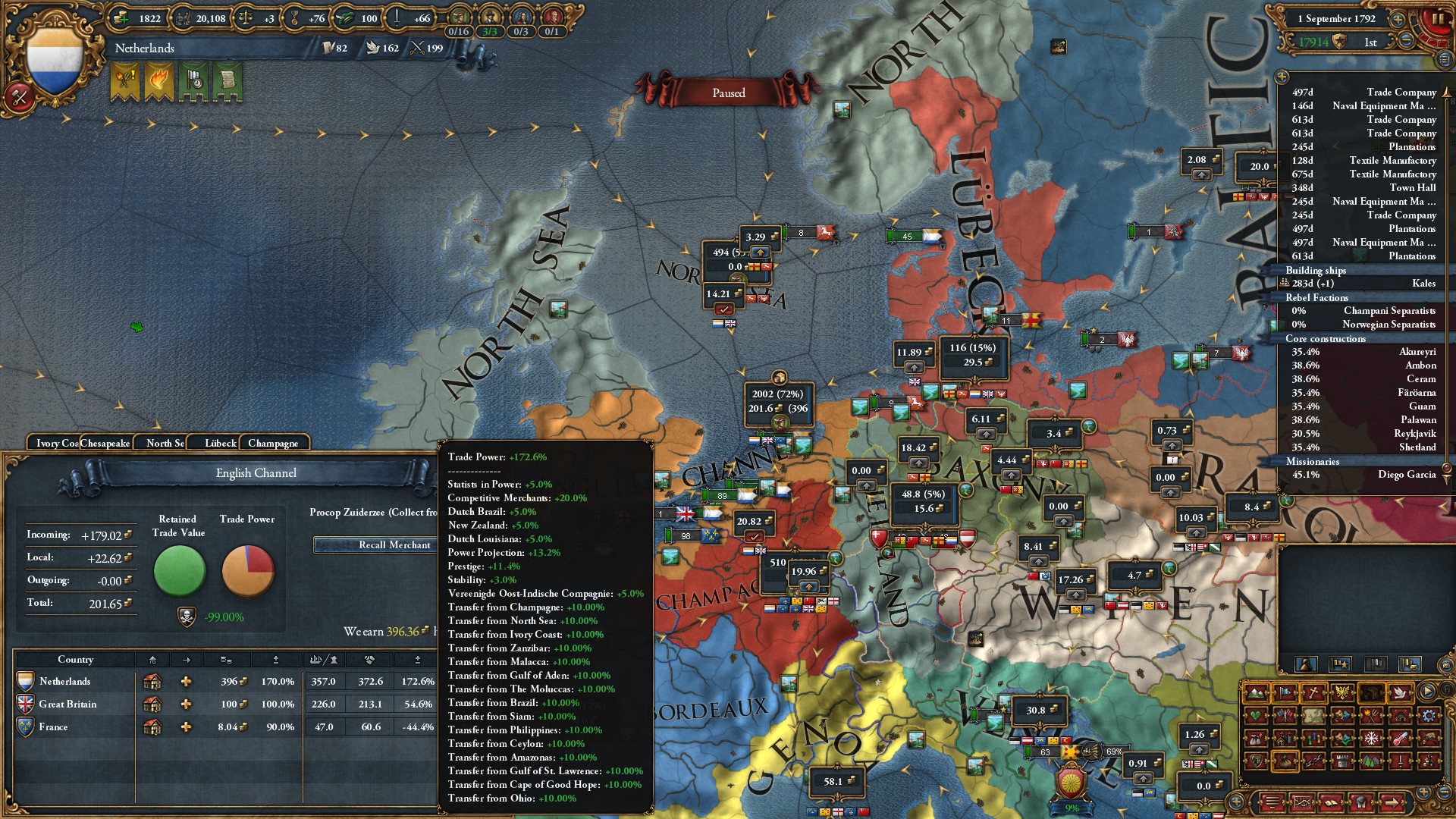 Trade at home - what you can't see is the Ivory Coast node feeding triple-digits back to the Channel. It's glorious. 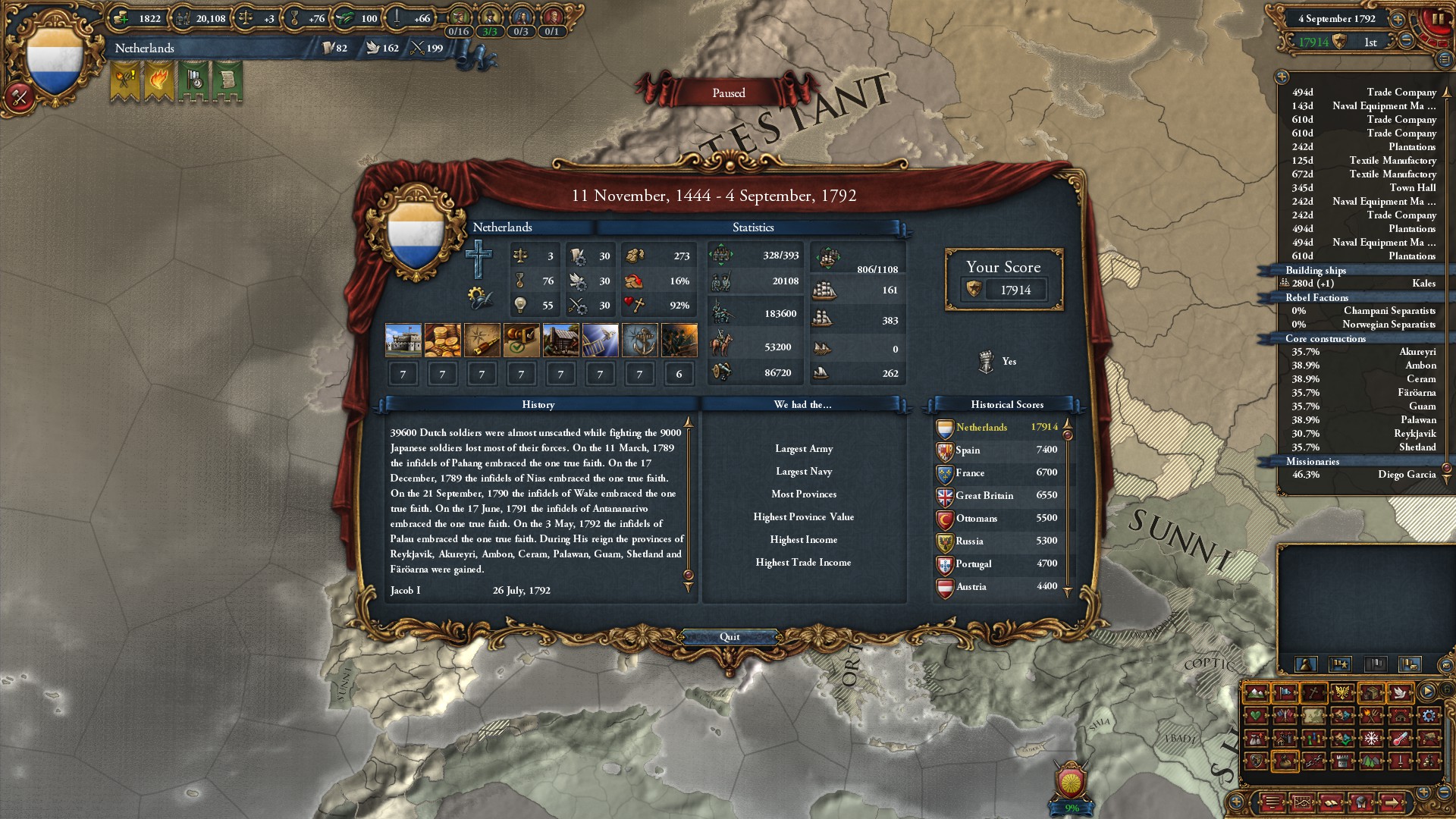 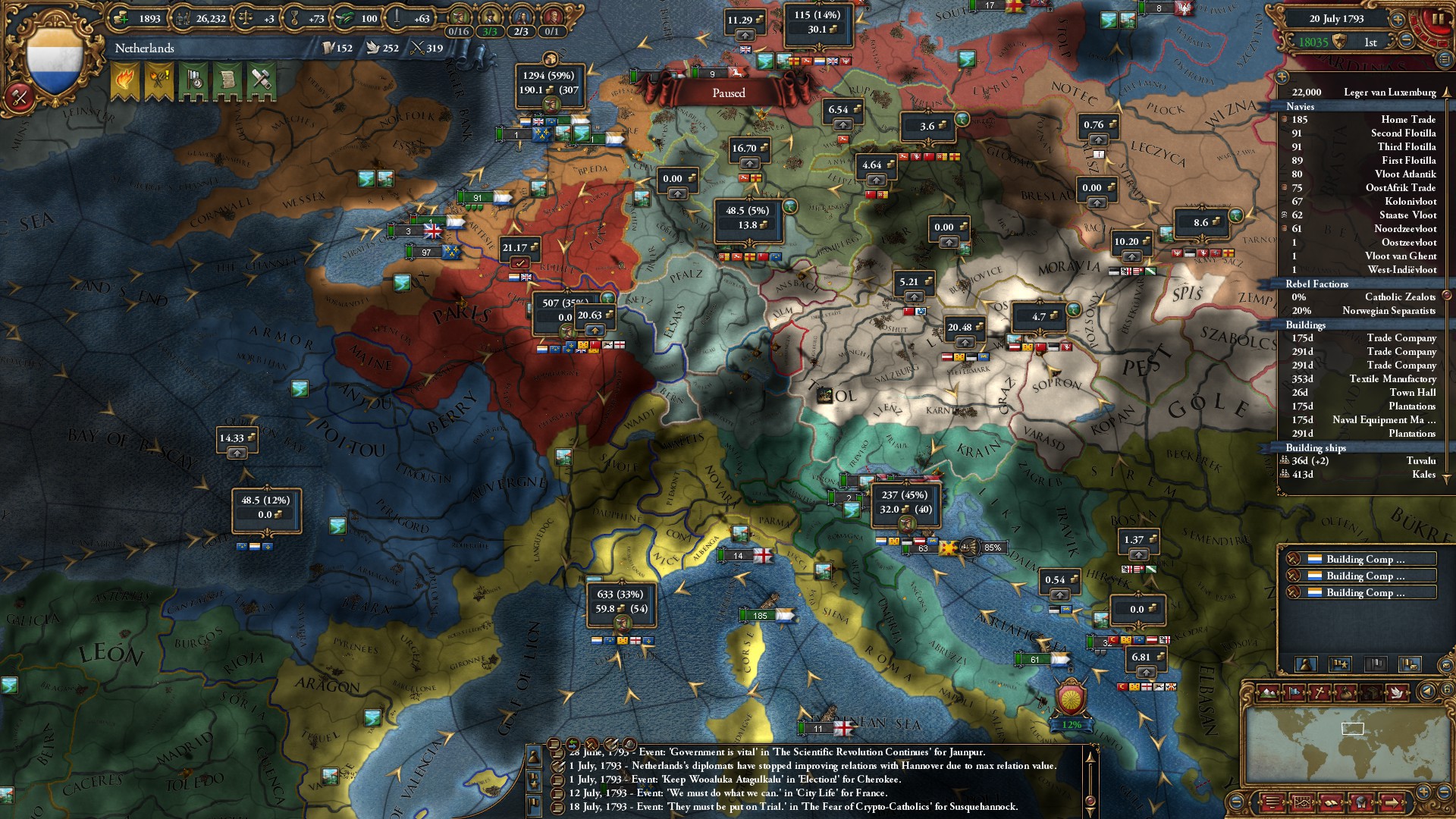 Shuffling merchants around just for the achievement. Because I can.
And for a bonus, the first proper game I played in Common Sense: Cologne into Westphalia. Nowhere near as awesome, but I did become Emperor and have all my provinces at insane levels of development. Netherlands is a March with a little colony in IRL New England. 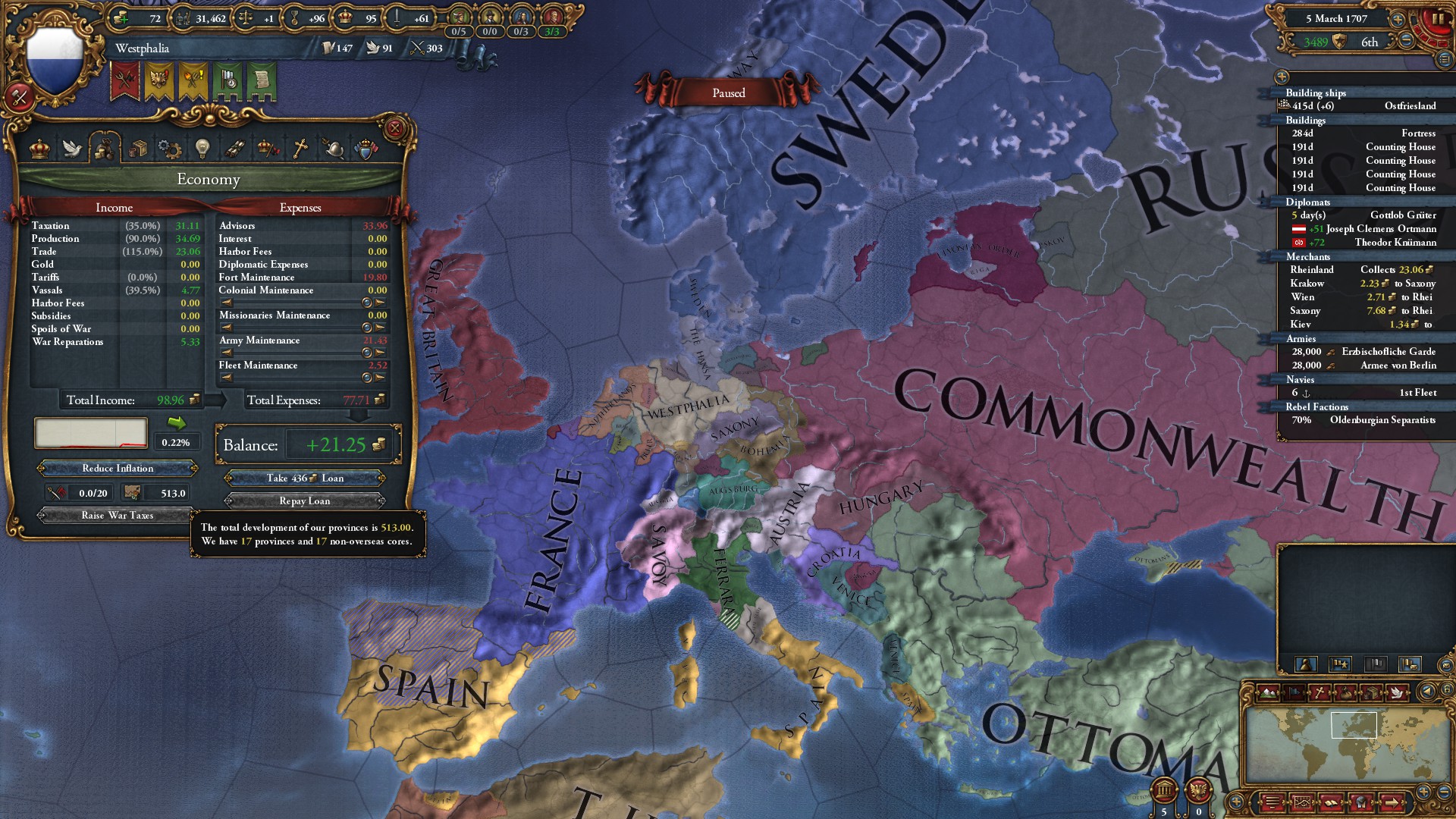 http://steamcommunity.com/sharedfiles/filedetails/?id=566263833
My last pre-1.14 empire. Even though I had such plans, the patch will release in a few hours. A kind of weird game that one was. Originally I wanted to keep things modest. "Won" the League war by loosing, gave the Catholics their Empire for giving Austria 20 WE, 80 years afetr the war Austria, up to the time one of the major blobs, was no more. Left the HRe immediately afetr surrendeirng, then disbanded it via console because a zombie Empire (if there are no egligible electors the HRE turns hereditary, hereditary HREs can no longer be disbanded) is just no fun. Then I got Hohenzollerns on the thrones of France and Russia - only for me to full in a PU under Russia for a very short bit, in turn getting the generic Walter dynasty on my throne. In 1768 I then still got a PU over France, In 1821 there's a Trastamara on the throne of Provence, a Valois rules in Florence, the Turks are ruled by the Persian Sabet dynasty (who also rules in Delhi), Russia is now pRussia under Hohenzollern, Norway is a Republic for centuries. Also, Tlemcen strong. A weird but fun game overall. RIP Germany.
2. Zazzau Got bored. I am Catholic.
3. Bavaria Burgundy-France with a PU over Aragon scared me out of this game, despite being my ally. Also 'm an Empire despite being so small, which is why I despise the CU-changes coming with Cossacks.
4. Ternate I don't understand why people aren't all over the Moluccan minors - easily the strongest OPMs in the game. Still got bored.
5. Burgundy -> France Decided to keep things modest and did NOT go after the Hungary PU or vassal feeding. After carving out some nice European borders, I decided to grab India, which I did in about 80 years or so. Didn't wuite manage to convert it all to Catholicism, though. Bonus montrous Livonian Order and Tabarestan going for Shahanshah.
That should've been everything. Maybe I'll finally go revolutionary.
Toggle signature
ROTW bro