Jump to latest Follow Reply
Menu
Install the app
You are using an out of date browser. It may not display this or other websites correctly.
You should upgrade or use an alternative browser.
Europa Universalis IV 76573 EUIV: Suggestions 16462 EUIV: Technical Support 5851 EUIV: FAQ & Strategy Guides 197 EUIV: AAR's, Let's Plays, and Fan Fiction EU IV: Alternate History Short Story Contest Contr 26
Show only dev responses

Path said:
Buddhist Ceylon meant every province I took in India had the wrong religion, and in 1.12--I only patched to 1.13 later--I had no easy way of having vassals convert either
Click to expand...

How do you mean? With subject interaction, you can't force a vassal to change religion outside of its religious group. Forcing them from Hindu to Theravada wouldn't be allowed.
T

doktorstick said:
How do you mean? With subject interaction, you can't force a vassal to change religion outside of its religious group. Forcing them from Hindu to Theravada wouldn't be allowed.
Click to expand...

He's referring to the 1.13 rule where if you create a subject, if over 2/3 of its cores are in a different religion from their original it'll be the majority faith. This can be useful on nations that are part of a big culture group + take religious, but don't have many of their own cores.

In 1.12 they always released in their original faith regardless.
Toggle signature
ROTW Bros: Unreformed all game | Video: Great Khan Achievement with Mongolia.

So it is possible! I think that-s the only achiement that on the globals on Steam says 0%!

that just means that less than 0.1% of the players completed it.

And of cause its possible ... everything can one-tag if they are in the hands of a dedicated enough player

Sian said:
that just means that less than 0.1% of the players completed it.

And of cause its possible ... everything can one-tag if they are in the hands of a dedicated enough player
Click to expand...

I would every much like you to show me a one tag Chinook or Potiguara
Reactions:

This is my campaign, finish in 1.11, going for the Three Mountains achievement. This is the end result of the glorious Sunni Republic of Ryukyu with me finishing with 5 years left. The end result in the new world. I started by invading the southern tip of India and converting to Hindu, after getting my Pagan modifiers. Then I proceed in conquering most of the Ceylon trade node in the next 40 years of the game. After that I when to snipe a colony off of Portugal, by turning off the el dorado expansion, and westernized by 1510. Following This, I conquered Arabia and East Africa and converted again to Sunni, after getting the Hindu modifiers for missionary strength. For the Next 100 years I went and conquered most of the Middle East, North Africa, West India and Central Asia. During This Time I severely weaken the only super power of the world, The Ottoman Empire, because France, the HRE and Russia never grew into serious powers. During The Next 50 years I focused on taking out the Russian region and Lithuania. After securing this area I when on a full out assault on Europe and the rest of India over the next 75 years and by 1750 the only "free" regions of the world where China, Japan, West Africa, Iberia, and the colonies in the new world that became free from there European masters. I also during this time converted my government to a Constitutional Monarchy.The last 66 years where then spent bring these regions under my control and punishing some of my protectorates for westernizing. By 1816 the last resistance of my rule fell in Africa and Asia and I proclaimed my Empire as ruler of the world.

Lastly the glorious and most coveted achievement.
Toggle signature
"War does not determine who is right - only who is left." -Bertrand Russell
Steam- Nic507
EU4- The Three Mountains Achievement Run
HOI4- One Empire
Reactions: 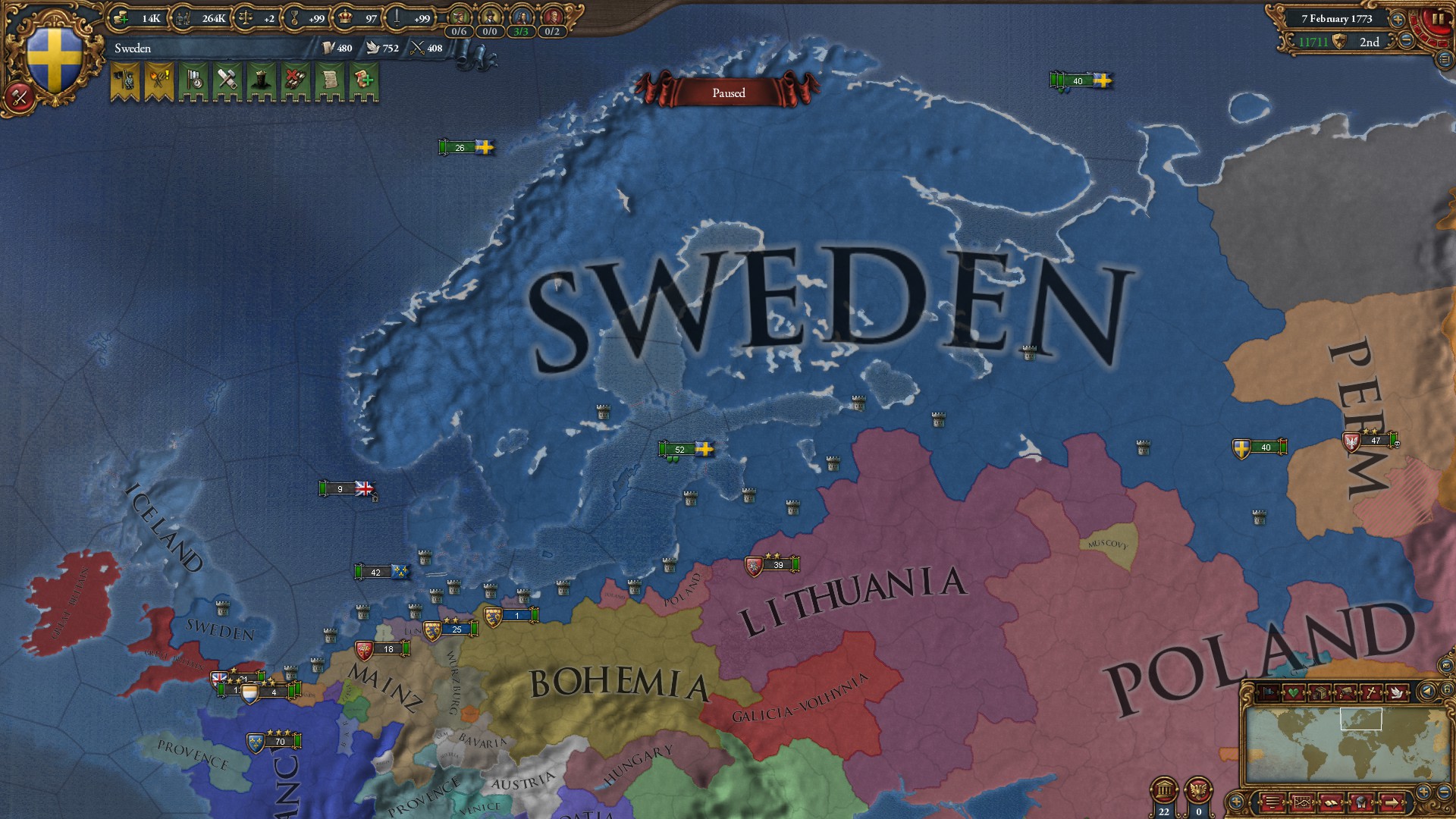 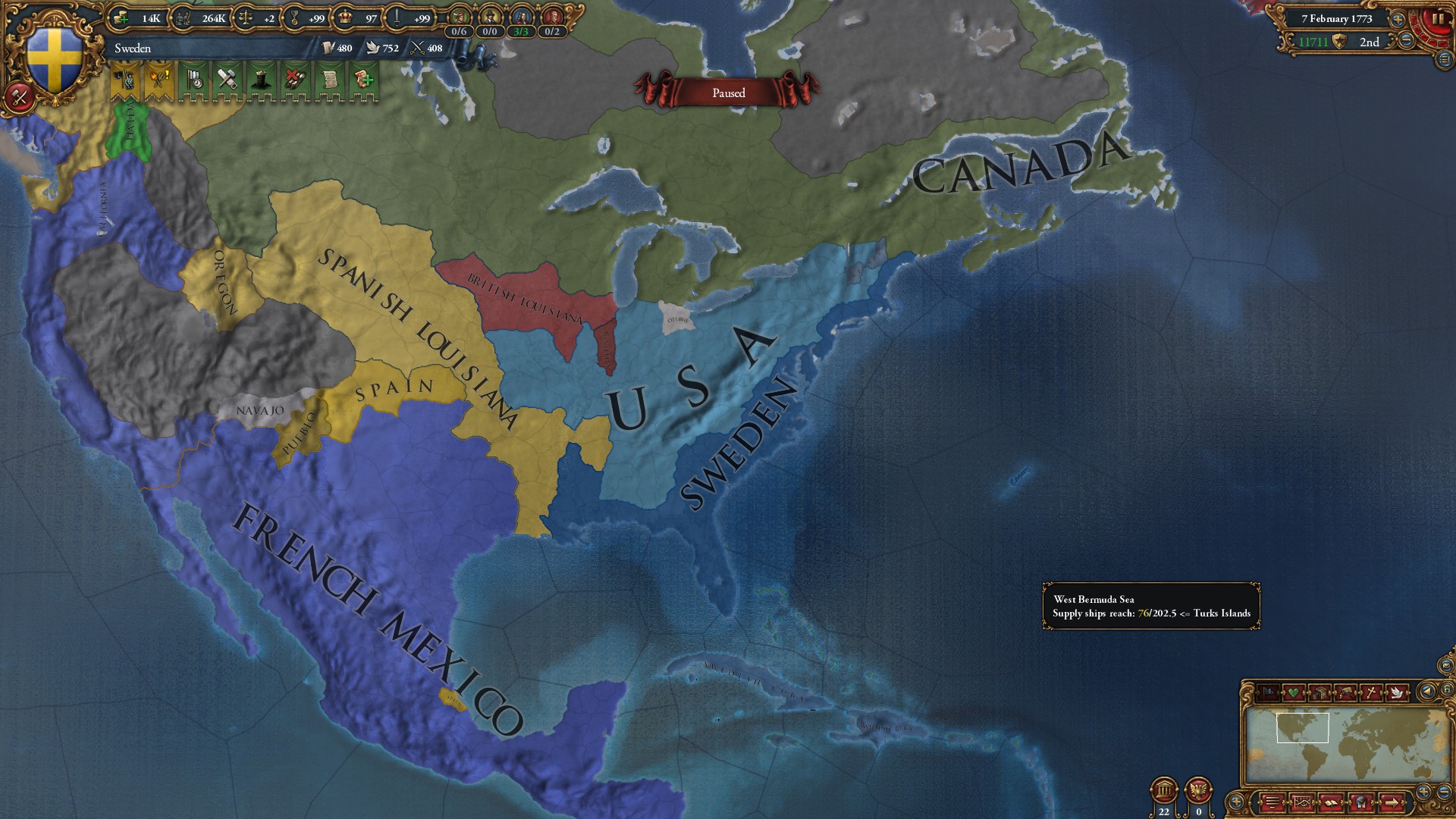 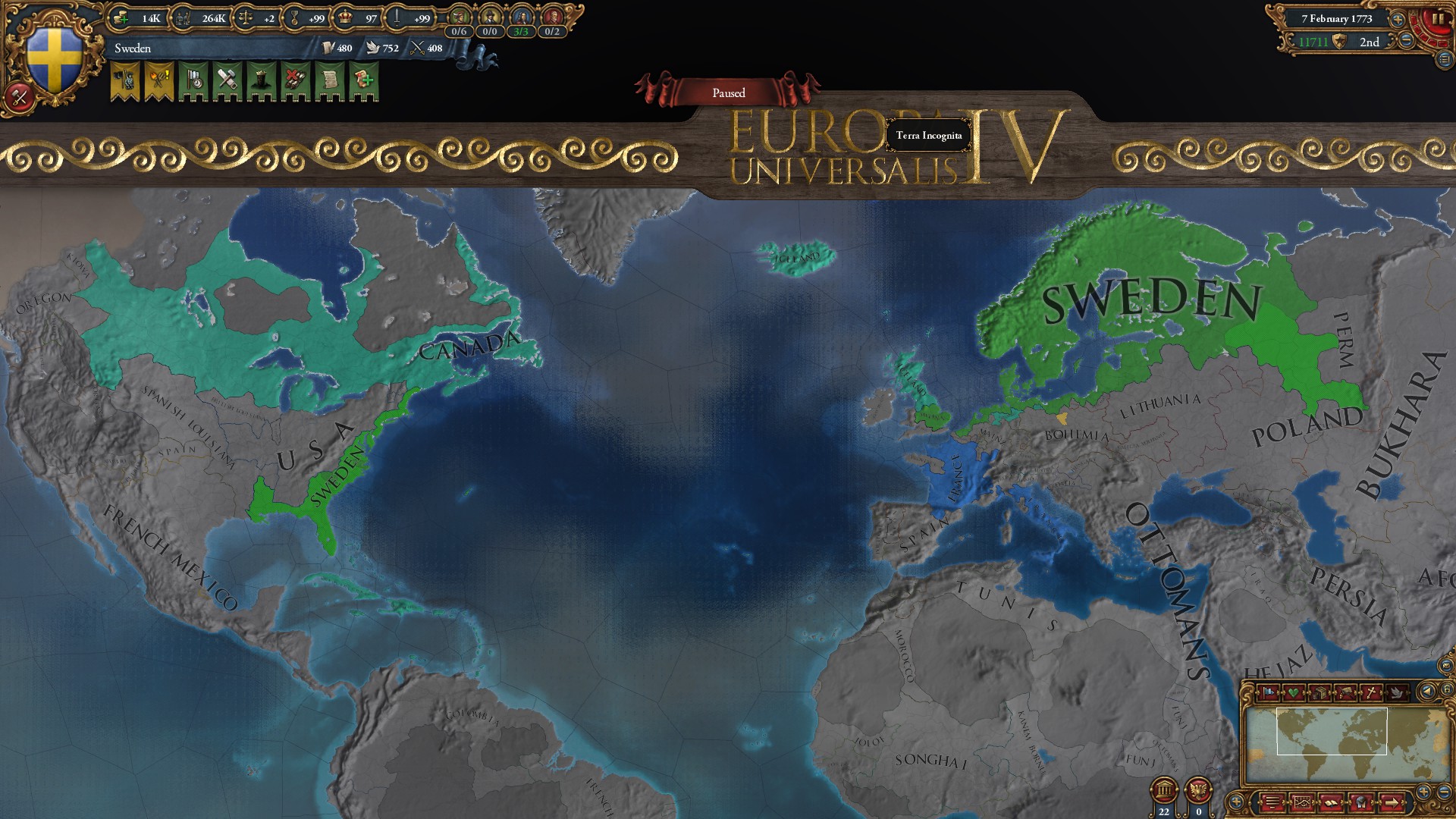 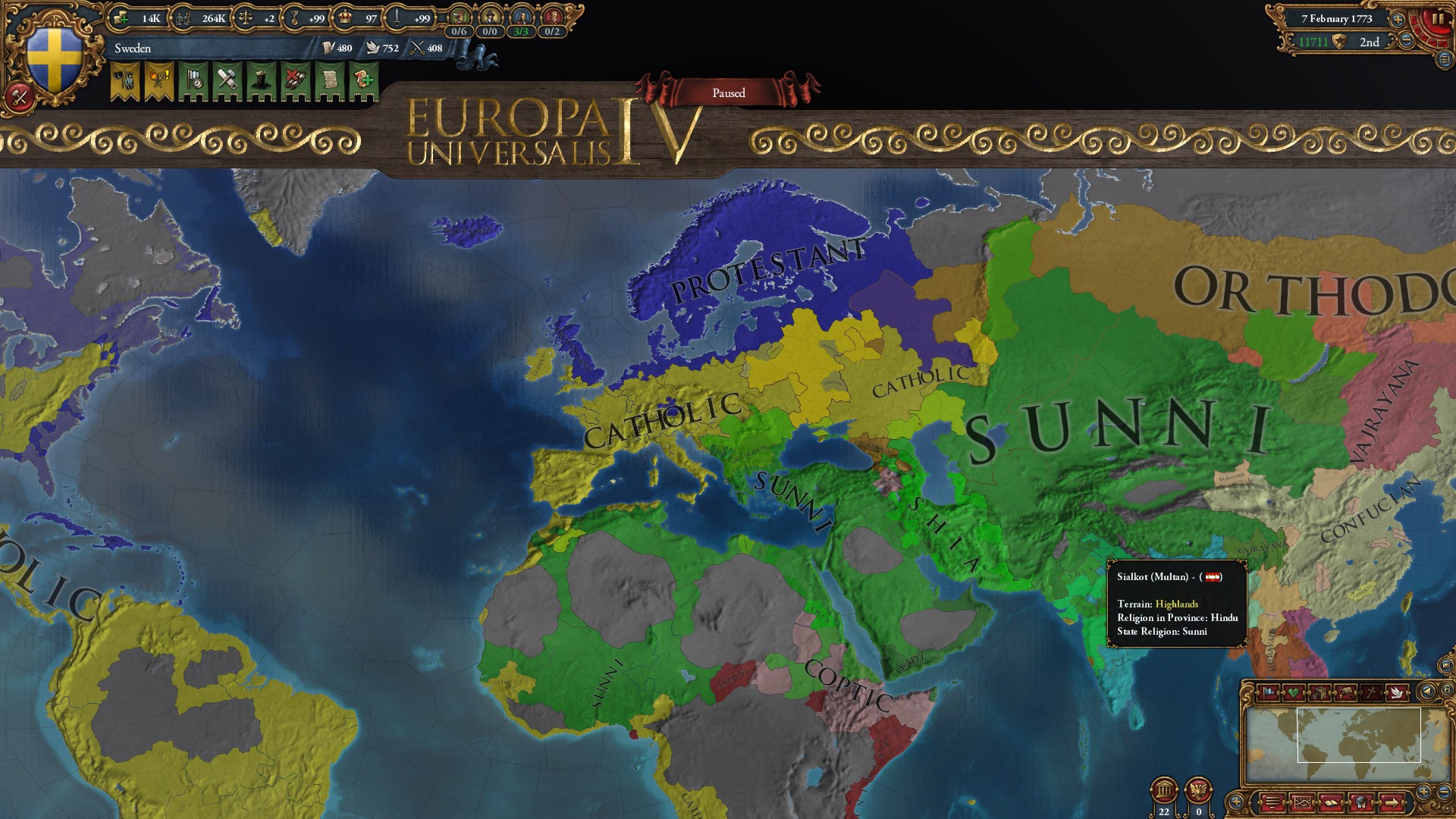 I tried to do the Lion of the North but as soon as the Ottomans joined the wrong side I left the league and shortly after Catholic became the official religion.

Also I entered the colonial party a bit late, taking all of the Dutch colonies in Canada and in the Caribbean (the USA formed as a Spanish colony). Canada is under a PU.

As for Europe, since all of the HRE is Catholic and France (my only ally with a 320k army) is the DoF I can't do much, except finishing the european part of Muscovy (which I released from Lithuania like 150 years ago and never formed Russia despite having all requiered provinces) and beating the Netherlands/UK every time I can. Iceland is my client state for those Norwegian and Scottish cores with +50% core creation cost)

I think I could do better mostly because two wars lost to the HRE when attacking the Hansa and Pomerania. They were too much and none of my allies back then helped me. A noob mistake I guess..

A couple of weeks ago I try going for Luck of the Irish but I ragequitted after two bad wars against the UK, the AI is pretty random when using transports and despite my side having 2x more troops I just keep losing.

Baron Tanks said:
I did it, I finished my Jihad. I was so close to giving it up a bunch of times, but I'm glad I persisted. While the first 200 years were daunting and some of the most exciting and terrifying gameplay I ever done, the last 150 year stretch was just a terrible conquer>core>conquer>core simulator. I have a newfound respect for people that do World Conquests and the likes, especially more than once.

The start of Najd is such a pain, having to carve an empire out of Sand. Your lands are so worthless and you're so weak, it's quite the challenge. But all the more satisfying when you pull it off. Oh and excuse the border gore, I was on the hunt for affordable lands, afraid I wouldn't make it in time if I cored indiscriminately. Looking back, I feel that was the right choice. 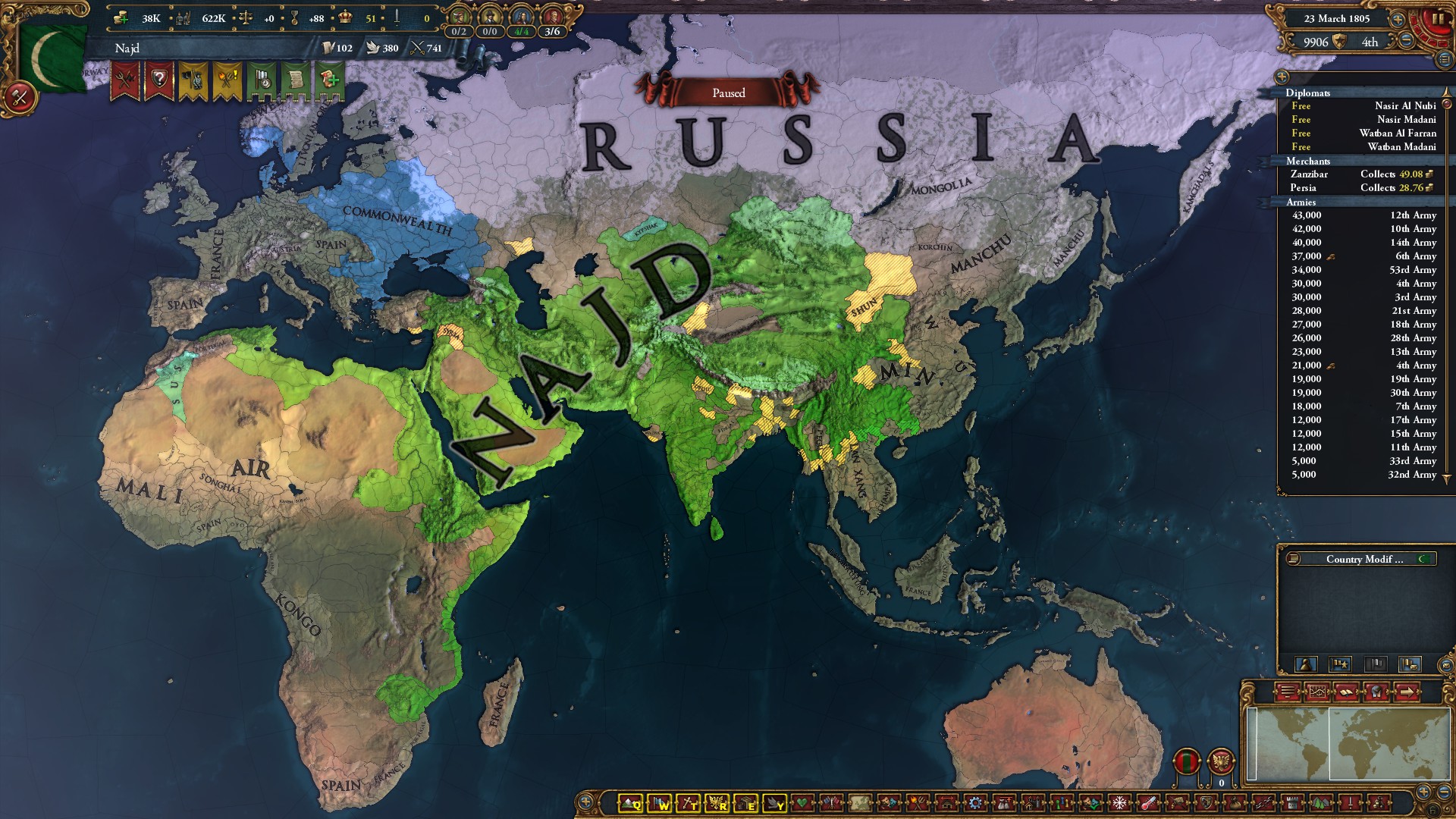 What graphics mod are you using?
Toggle signature
"I admire its purity. A survivor... unclouded by conscience, remorse, or delusions of morality."

Path said:
If you're playing a lot of MP games your focus will naturally be different, since you can't afford to waste the time on that kind of micro (no one could keep up with it for long).
Click to expand...

In the Americas you have plenty of time for the first 100-150 years to micro away even in MP.

Support Campaigns! Help the AI understand its goals, and add flavor to the missions system.
L

Someone mentioned bordergore on one of my post so here it is, some mild gore of borders. Neat border limits your efficiency, so if it has to be gory then by all means!

Papal State has the best looking borders in europe, if you ignore a couple of blotches ;p 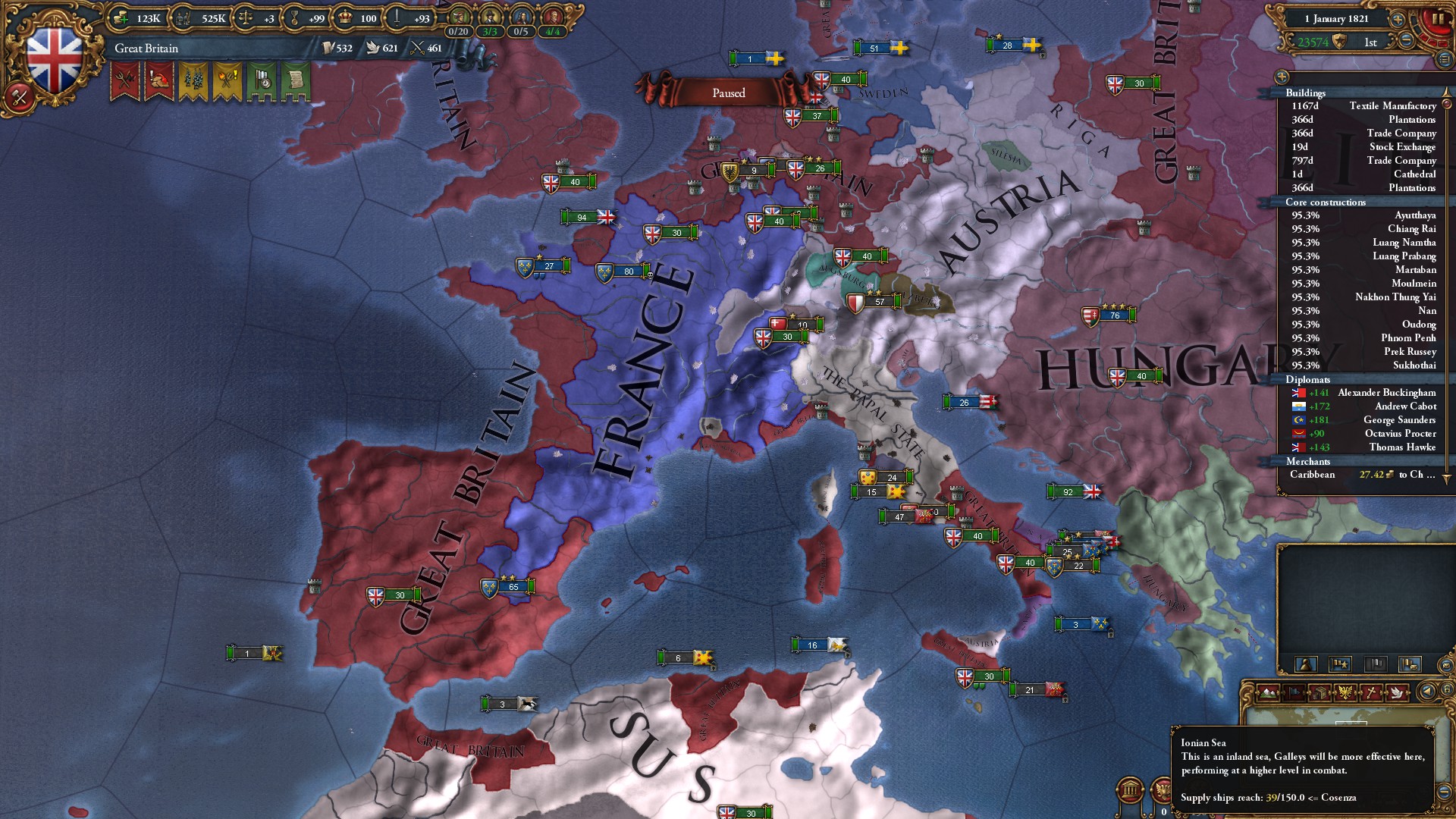 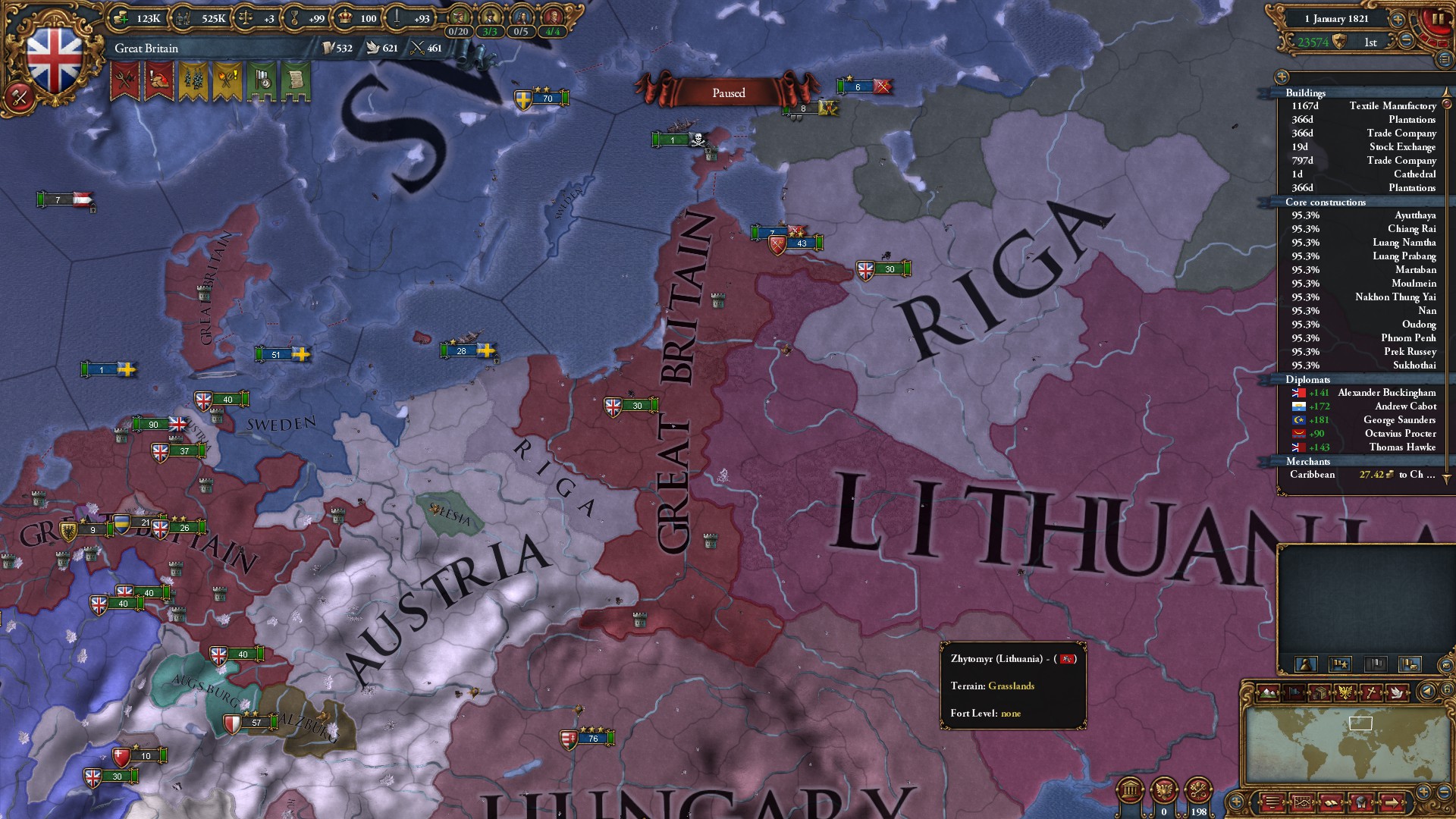 Vijayanagar has some sort of disease. That natural Ardalan though is impressive, ditto with Ava 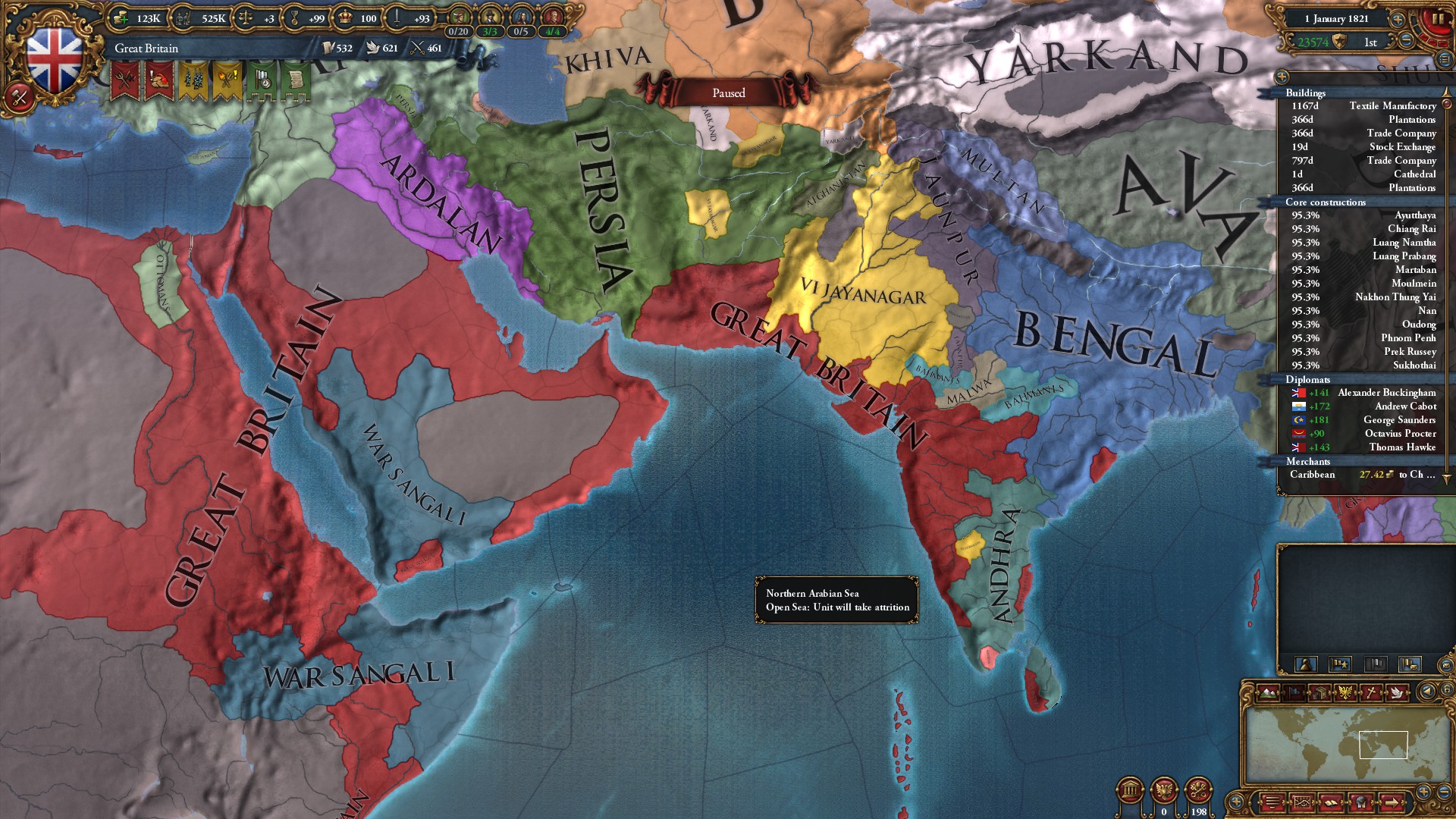 Bordergore China? Nothing new there. That Malacca, GB, Dai Viet mess though makes me happy 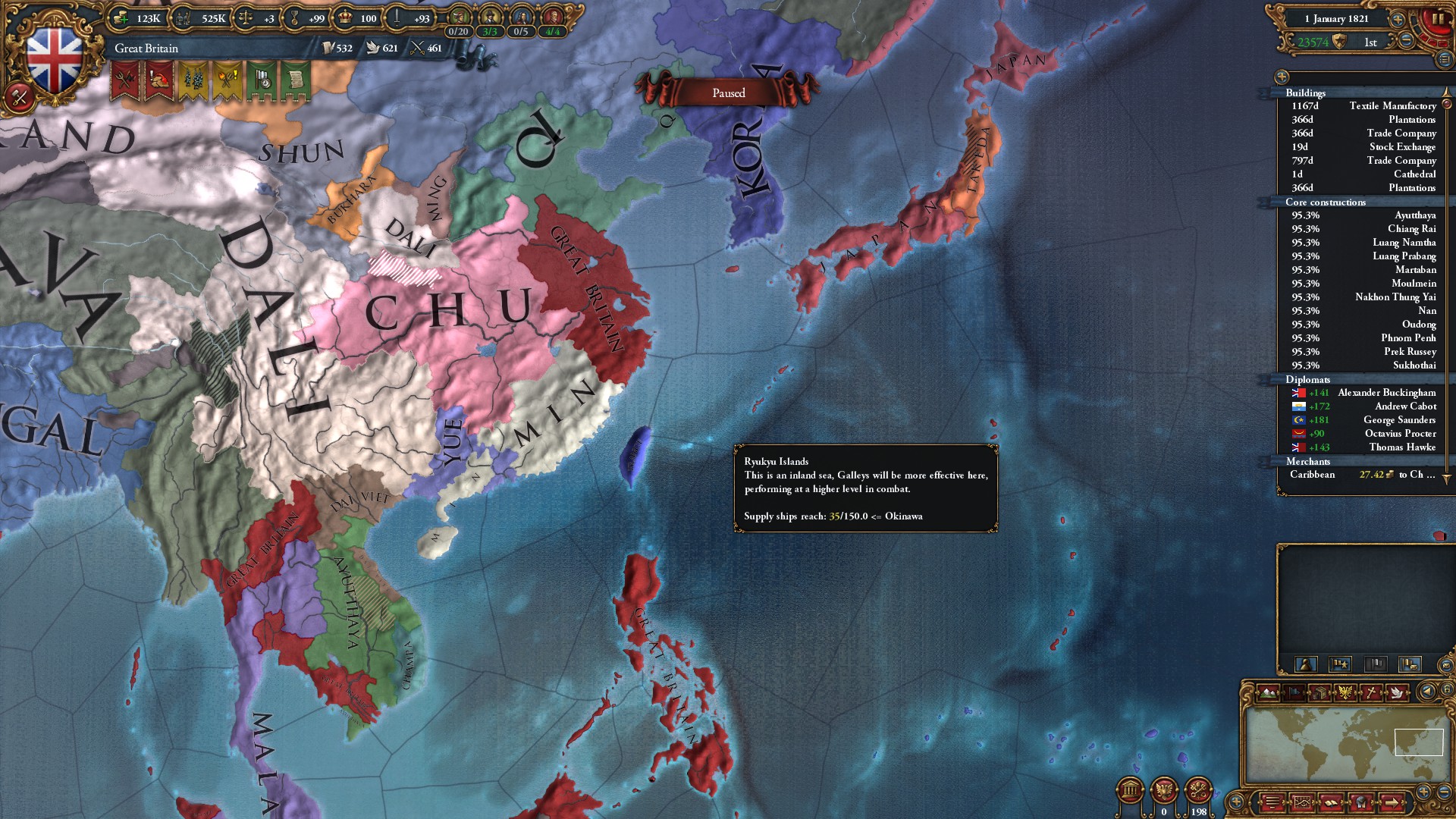 Loveeulongtime said:
Someone mentioned bordergore on one of my post so here it is
Click to expand...

Support Campaigns! Help the AI understand its goals, and add flavor to the missions system.
Reactions:

What graphics mod are you using?
Click to expand...

I'm pretty sure I had GFX overhaul on: Since we are doing achievements, just finished Jihad And aggressive expander in the same game lol.

PS: The Ottomans are a pain in the ass
Toggle signature
"Honor compels me to stab you in the back, ShoGul." - blue emu
Reactions:

Toggle signature
Check out my historical AAR as an independent Japan in an attempt to become a Superpower during WW2:

the wrecked possibilities of the Iberian Wedding hurts my eyes
Reactions:
D

Damn! How'd you do it that fast?

Necurok said:
the wrecked possibilities of the Iberian Wedding hurts my eyes
Click to expand...

Necurok said:
the wrecked possibilities of the Iberian Wedding hurts my eyes
Click to expand...

I know I messed up there but I was not about to let Aragon fall to the english sphere of influence, as they had already done with Portugal. Being in between two english allies would be an existential threat. If I learned anything from HOI is that two front wars suck.

Also, I wanted to become 'Imperator Totius Hispaniae' or King of all the Spains. The entire former roman province must be mine. In fact, a long term goal is to rebuild the old Roman Empire and usher in a new golden age of classical civilization.
Toggle signature
Check out my historical AAR as an independent Japan in an attempt to become a Superpower during WW2:

Just finished my "Prester John" achievement run.
Who knew Ethiopia was such a powerhouse?