I wanted to play a little longer, clean my borders and all, but the game is lagging too bad. I have more than 1 million units around the world and I can't fight my wars anymore because my PC can't handle it. So, I decided to leave it like that, at least for now.

Events broke my republic. So many stab hits... Who did you use to form USA? Portugal, Irish minor, something else entirely?
Expand signature
ROTW Bros: Unreformed all game | Video: Great Khan Achievement with Mongolia. And on Ironman to boot.

Added boot? Took the Holy Land after becoming Papal Controller and calling a proper Crusade against the Mamluks. Which really helps: its bonuses go a long ways to making the Cypriot army strong enough to stand up to the superior numbers of the infidels.

I have to say, it's been one of the hardest starts I've had. Had a couple starts end early due to Venetian invasion (and I just got to excommunicate their sorry asses, felt soooo good!) that my then protector Mamluks were useless in helping with, and had one decent start end when I tried too soon to press into Syria and got promptly trounced into oblivion. This time, though, I've executed to perfection. Used the Mamluk guarantee for as long as I could, managing to use their fleet to sink the invading Venetians before they could land on my island and revoke their guarantee of The Knights. They were also invaluable against the Ottomans, and my first war against the Turks started with the Ottomans attempting to claim the territory I'd established in southern Anatolia (those Turkish minors are about my only expansion route!). With the Poland-Lithuania doomstacks from the west, France by sea, and the Mamluks from the east, I managed to deliver a pretty convincing blow to the Ottomans (seriously guys, YOU started the war!) which in turn allowed me to start pushing them out of Anatolia and build enough strength to eventually face off with the rather successful Mamluks.

Which eventually we did. Next goal? Feed the rest of their cores to my Syrian vassal state and take the rest of the Syrian provinces, and then maybe I'll consider (after annexing Syria) forming a Turkish vassal state in Anatolia so I can culture shift to Syrian. Wouldn't be able to do the "Italian Ambition" mission, but it's already almost 1600 and the closest to Italy I can get would be my ally of Naples... and eh, I like Naples. Would rather shed myself of the vile French culture and insure the Syrian culture survives. So far I have Influence, Offensive, Economist and Humanist ideas. I think I want to take a military idea group, but I also think that using Religious to feed Otto land (they have Poland) to my vassal Bosnia would be even nicer. It's just that they have 100 000 more men than me. My other alternative is rivalling France to ally Commonwealth, and then hope that I can kill France using them and Spain.

tl;dr: Religious ideas to feed vassal or military ideas to get better men? Is France kill or no?

Monoslay said:
My Golden Horde, worthy of the name:

Yeah, I noticed after starting the game that Georgia has an Armenian core.
I was expecting the pre-1.8 situation where Armenia had just 1 core and it was owned by QQ at the start.

I think that releasing from Georgia doesn't change much. Worst case scenario it slows you down by 20 years.

So far I have Influence, Offensive, Economist and Humanist ideas. I think I want to take a military idea group, but I also think that using Religious to feed Otto land (they have Poland) to my vassal Bosnia would be even nicer. It's just that they have 100 000 more men than me. My other alternative is rivalling France to ally Commonwealth, and then hope that I can kill France using them and Spain.

tl;dr: Religious ideas to feed vassal or military ideas to get better men? Is France kill or no?
Click to expand...

TheMeInTeam said:
Who did you use to form USA? Portugal, Irish minor, something else entirely?
Click to expand...

Indeed. Got into a war with my long time ally Poland+Lithuanian subject for it. Barely won it because they had Brandenburg on their side and France wouldn't help since they were above 50% liberty desire.... But I got that down to 10% now and am in a war with huge Poland since it didn't form PLC and it annexed Lithuania... Fun game indeed. Btw I got orkney and one other island from Norway too so I might go on England some time soon Trying to go around the world at the moment, hate that crap

Looks good, but it's missing something.... Still a work in progress of course. and I need 3 more techs before I can have a colonist. Til then I'll just have to take it from Kazahk.
Expand signature
You can do anything with a bayonette, except sit on it.

A lot of fun things happened on this map...

Then if you wonder why Spain looks funny, that's because it's Catalan. Castille still holds a few north coast provinces.

Commonwealth... that never happens. Was my firm ally until I decided I wanted to stop being Brandenburg. He's got so many armies... and no generals. Stackwipe galore.

Novgorod and Goldenhorde beat Moscovy to a few tiny provinces, then Moscovy used Commonwealth to turn the tables, Beat novgorod down to one province, so I vassalized and fed him. Kazan ate goldenhorde. And furthermore. Tunis must be destroyed.

This is the first game since 1.9 that Tunis didnt own all of north africa that wasnt spanish. I think Tunis got a pretty big buff...
Last edited: Mar 20, 2015
Expand signature
You can do anything with a bayonette, except sit on it.

Been a while since I've felt like I should post one of these. Playing a Knights to Jerusalem game and I saw Croatia popped out. They rarely survive so I thought I'd change that and saved and reloaded, reloaded a couple more times after Austria ate me rather quickly, but finally found my feet: Trebizond and Venice(OPM in Brescia) are vassels, France and Bavaria are loyal allies. Kiev is a pain in the arse ally who keeps getting me in wars with Russia, which I will be end till the end date. Their manpower pool is absurd. This is all 1818. Nothing of importance was going to change in those last few years given my drawn out war with Russia over Kiev.

Side note, Spain, Portugal, England, and the Commonwealth are the only Catholic countries left(maybe Japan).
Expand signature
If I'm speaking in Yellow, it means I'm speaking in my capacity as a Demi-Mod.
Any other color, it's your choice whether to pay attention or not​
"Texas is a state of mind. Texas is an obsession. Above all, Texas is a nation in every sense of the word." -- John Steinbeck 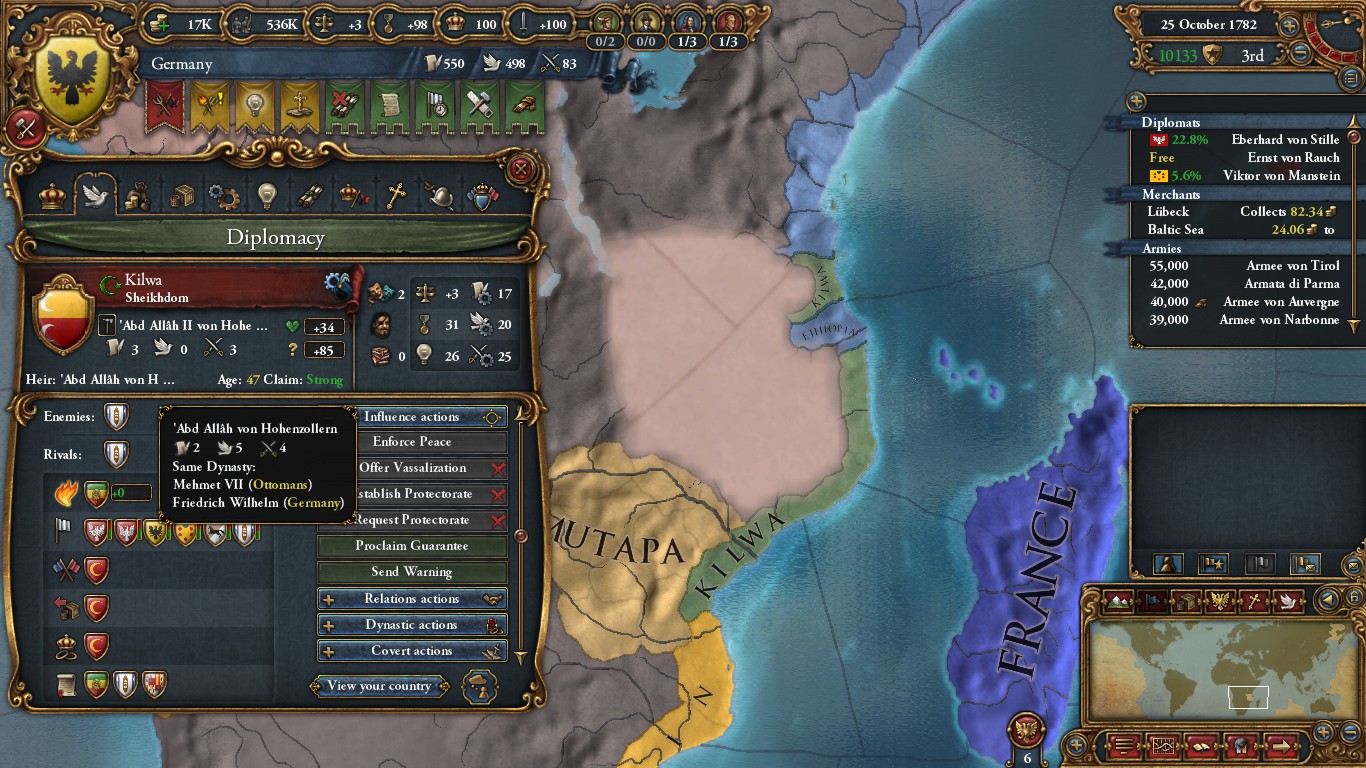 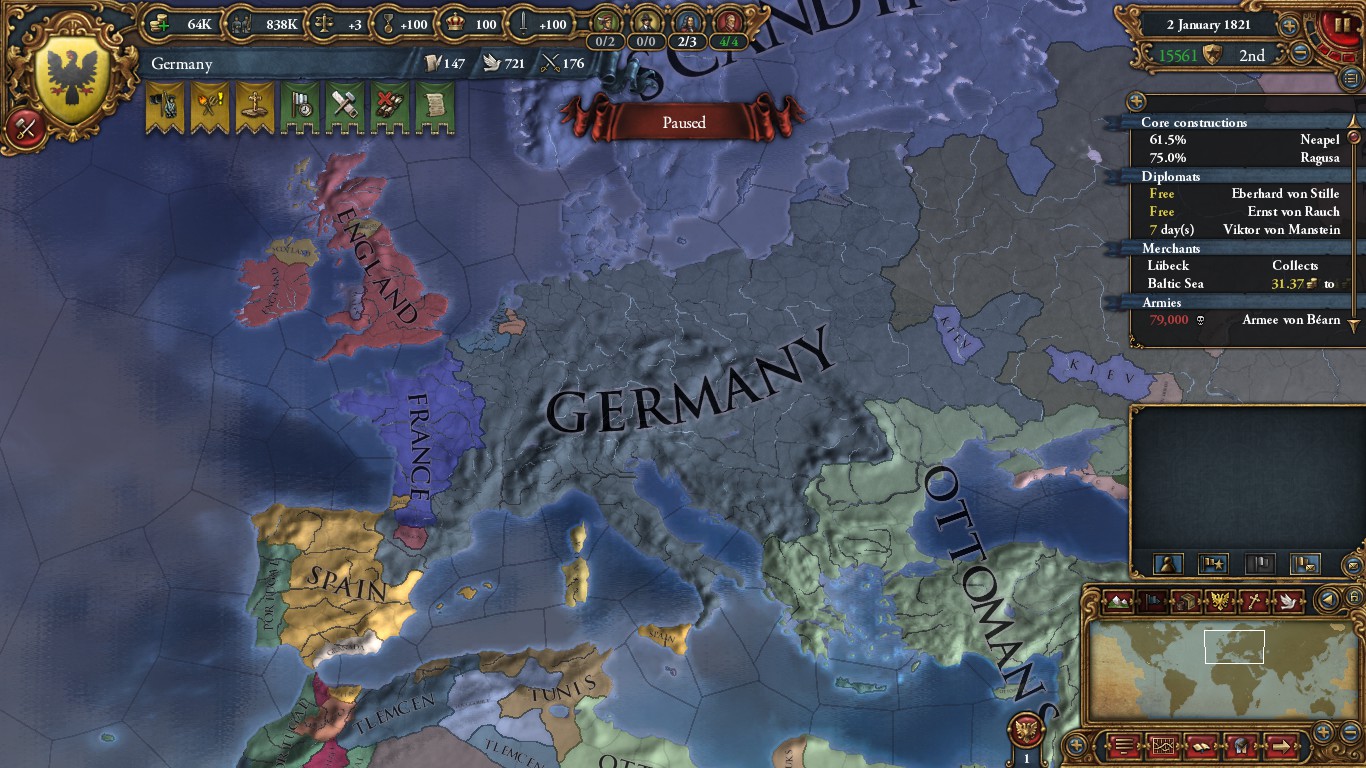 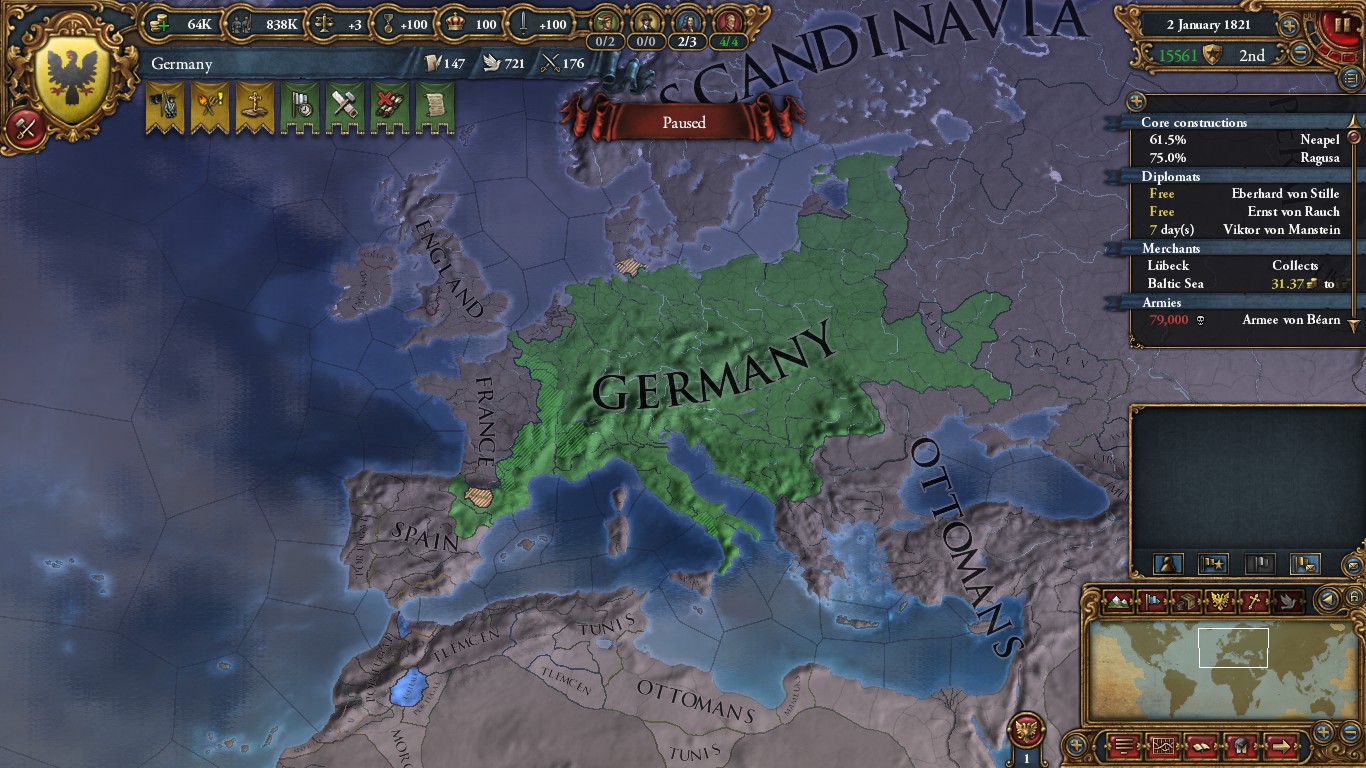 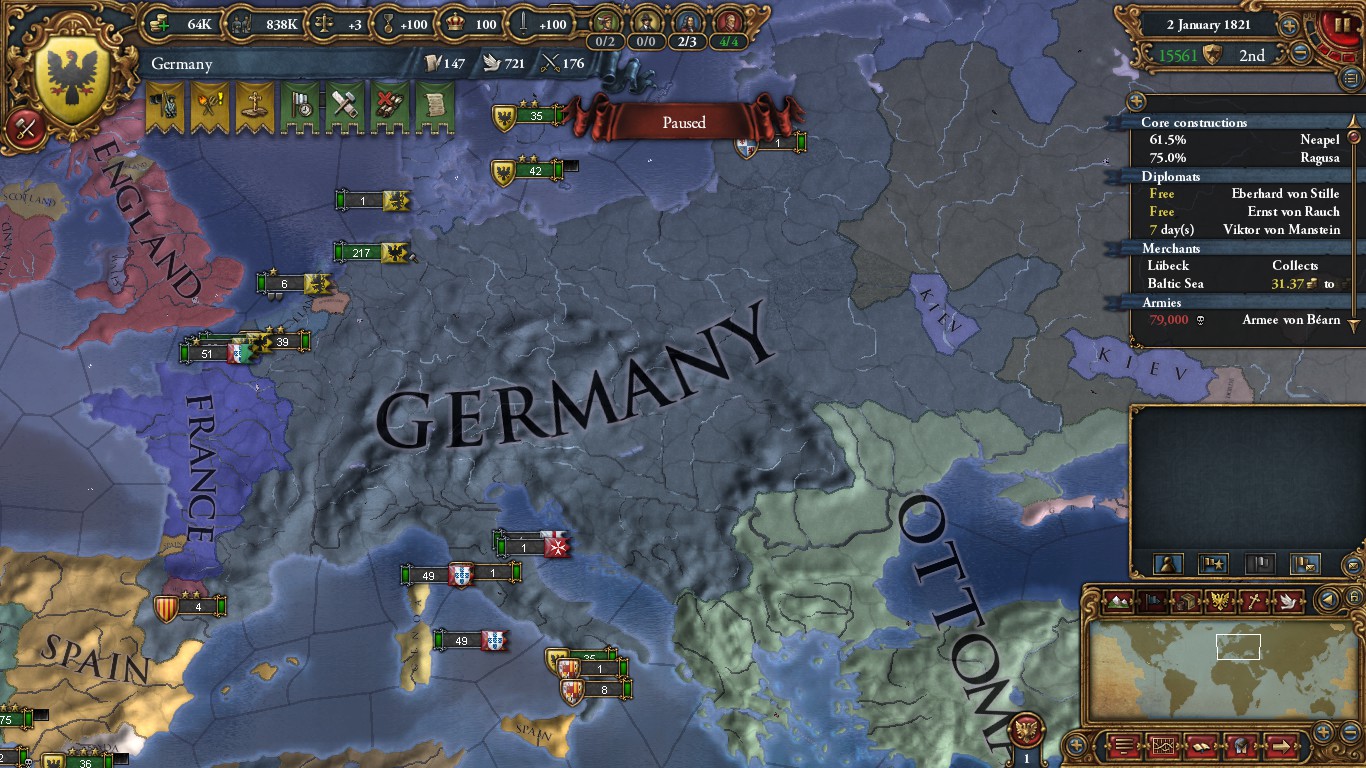 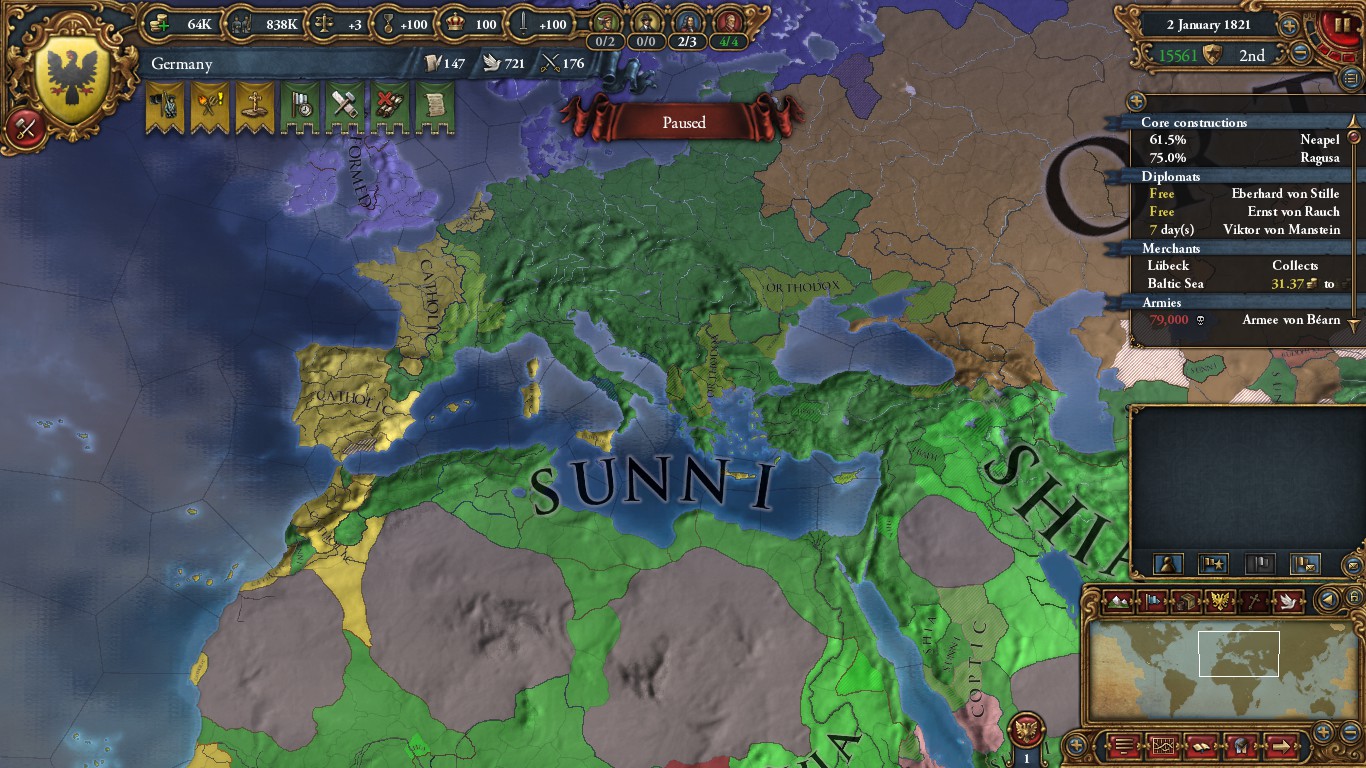 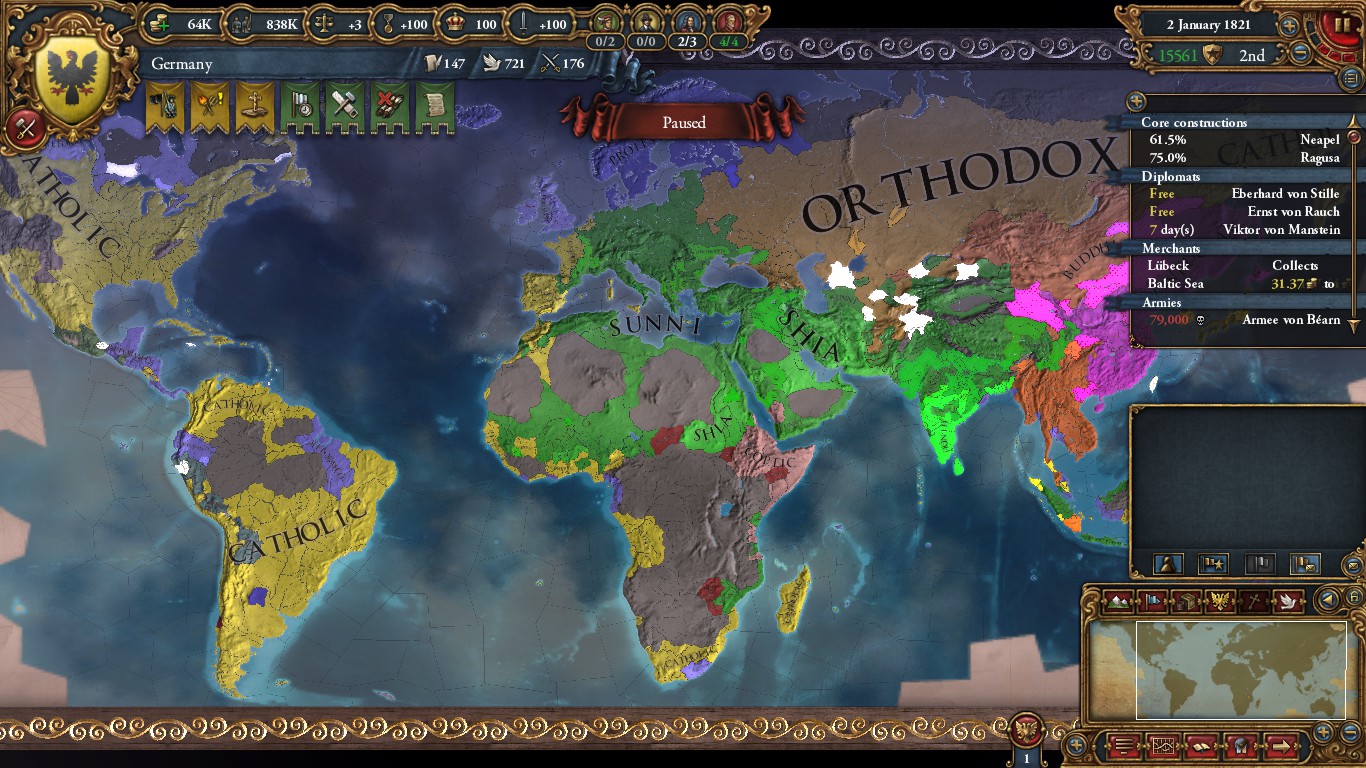 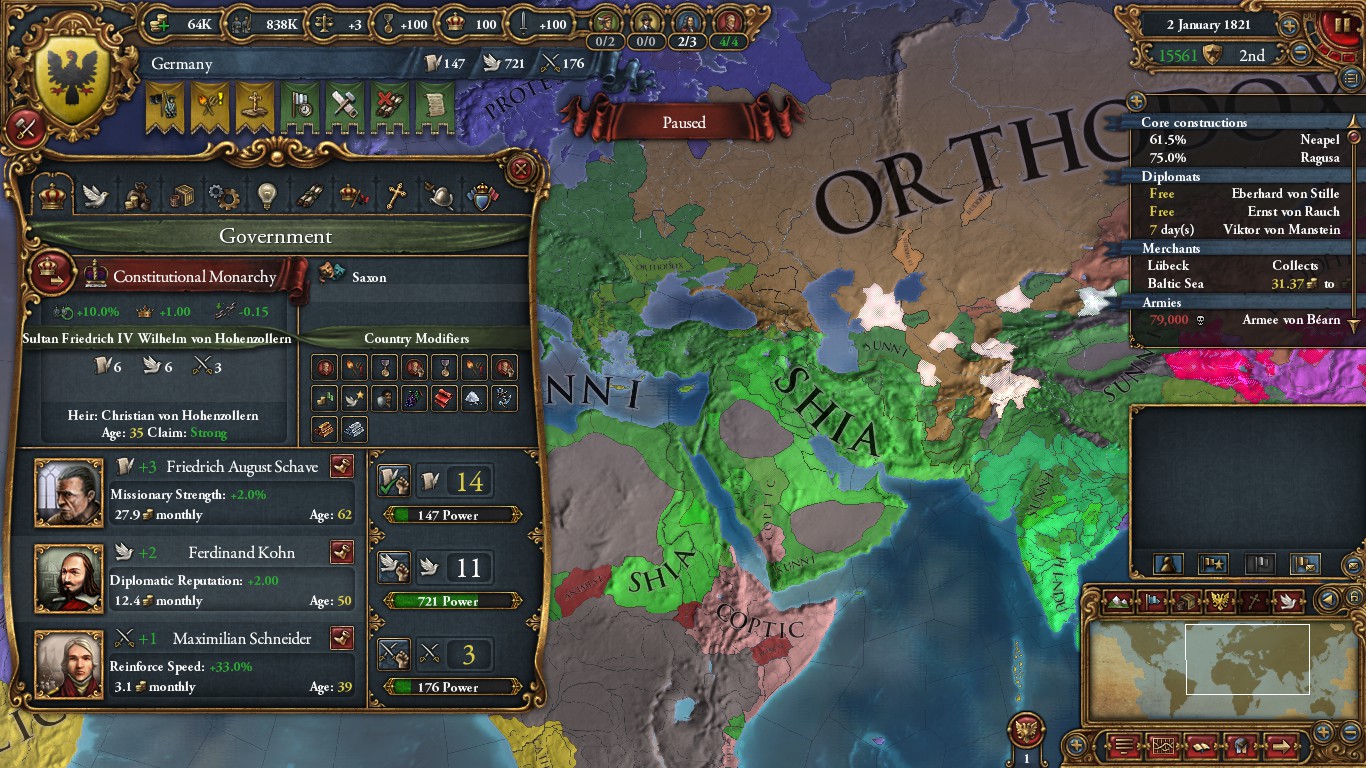 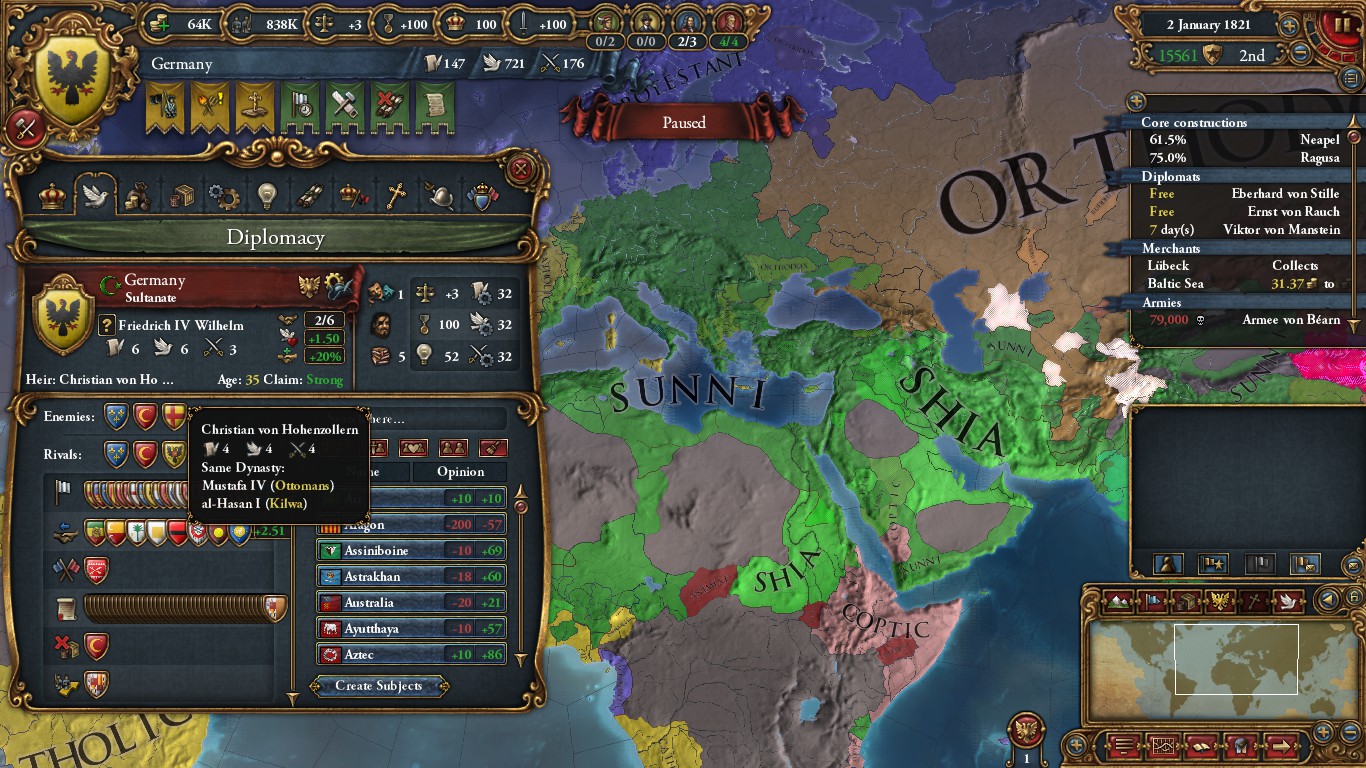 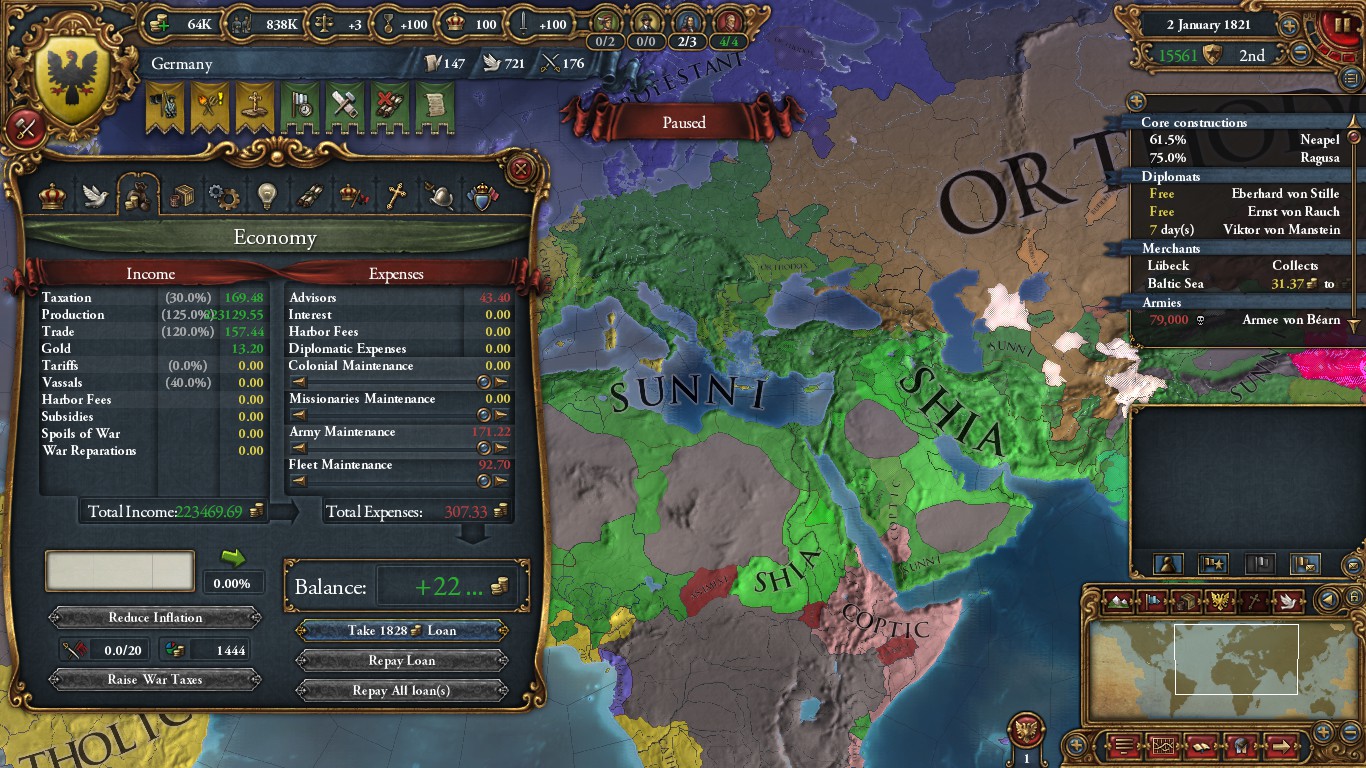 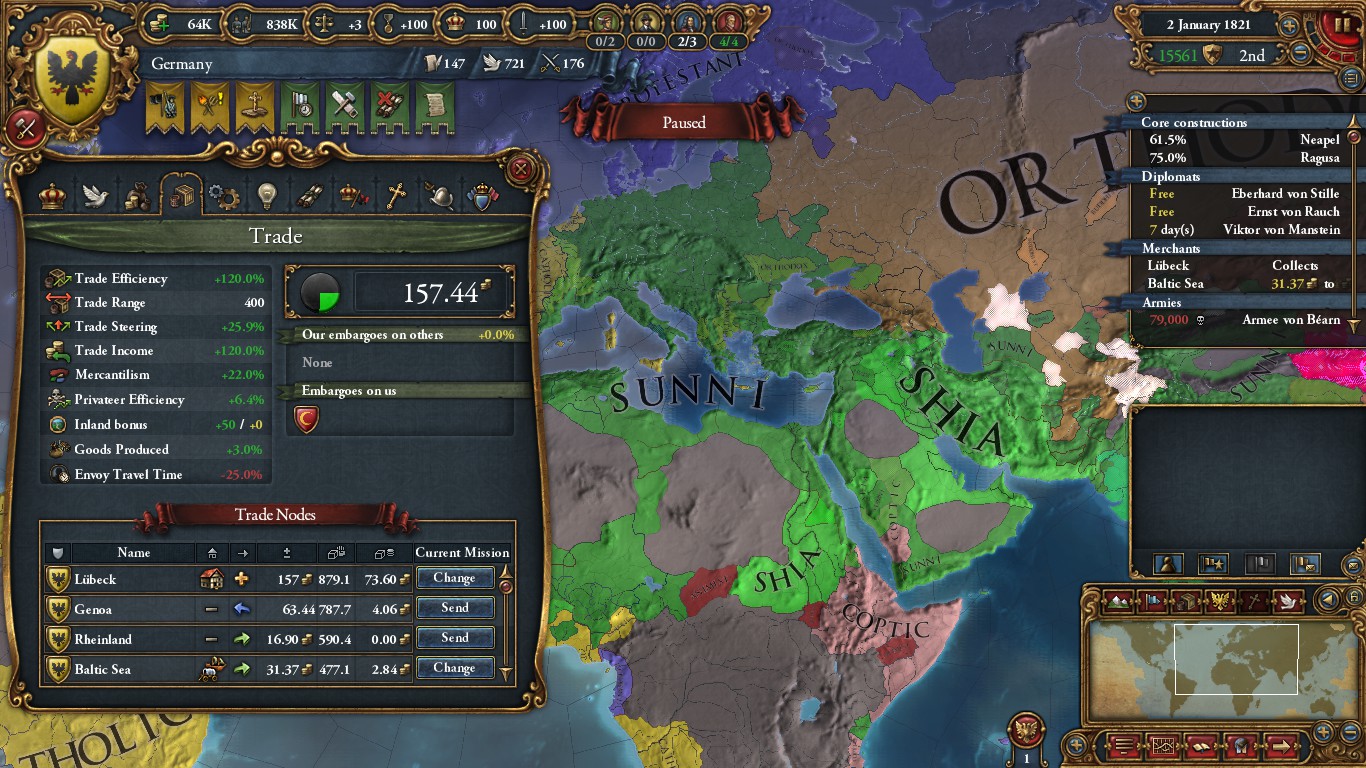 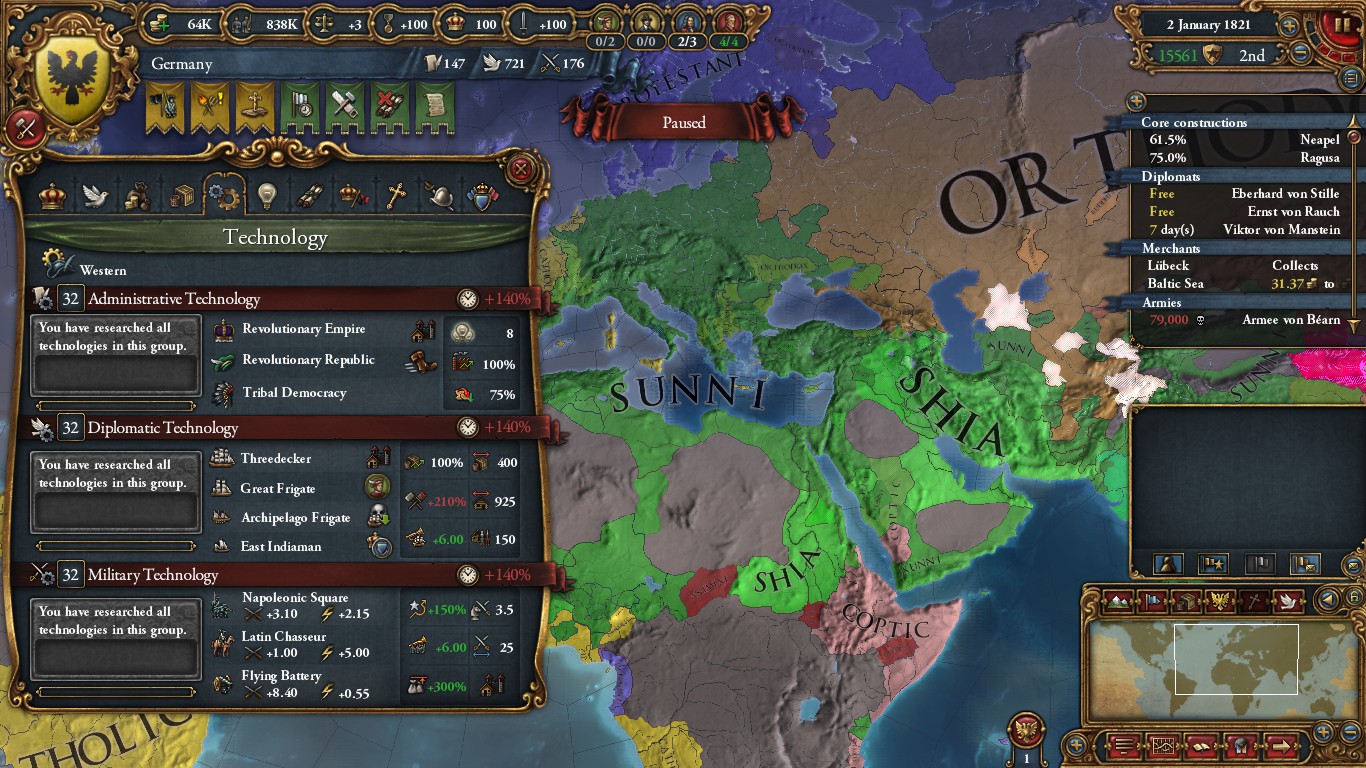 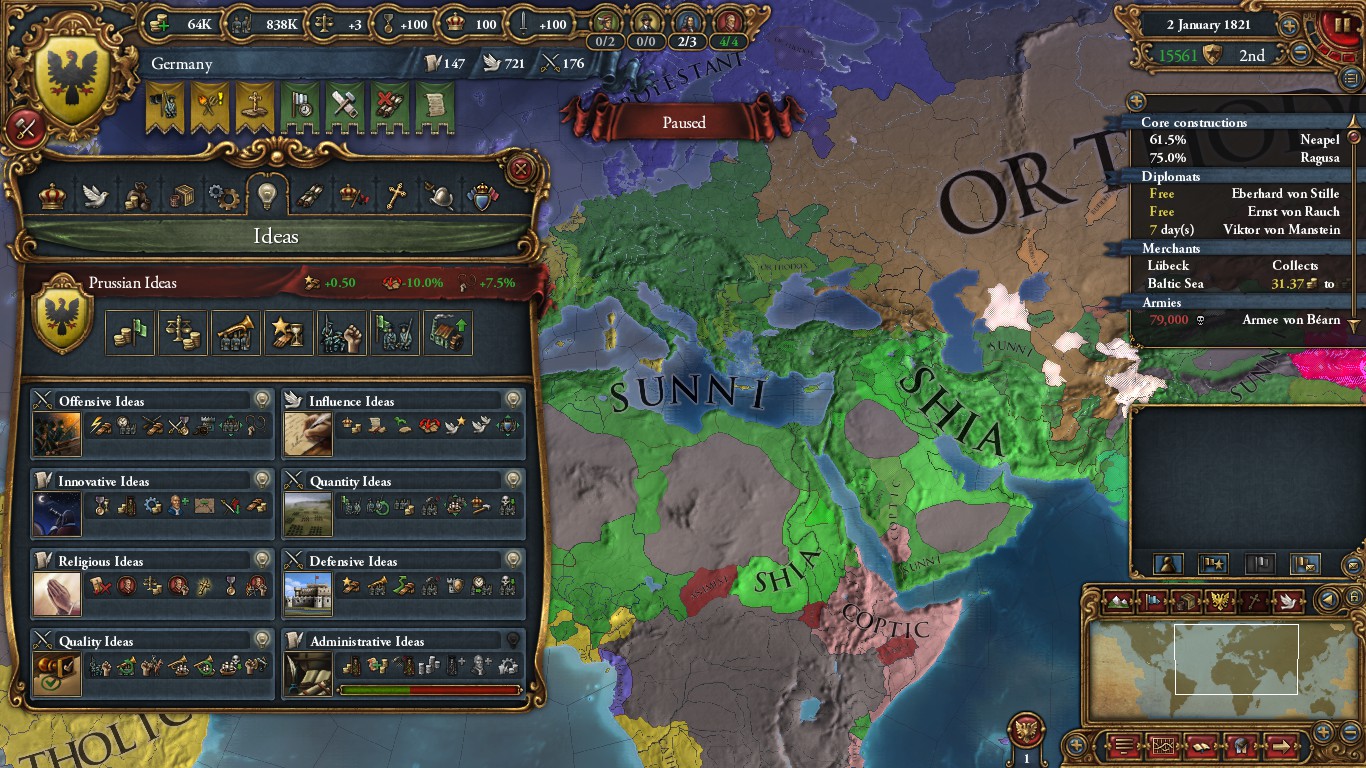 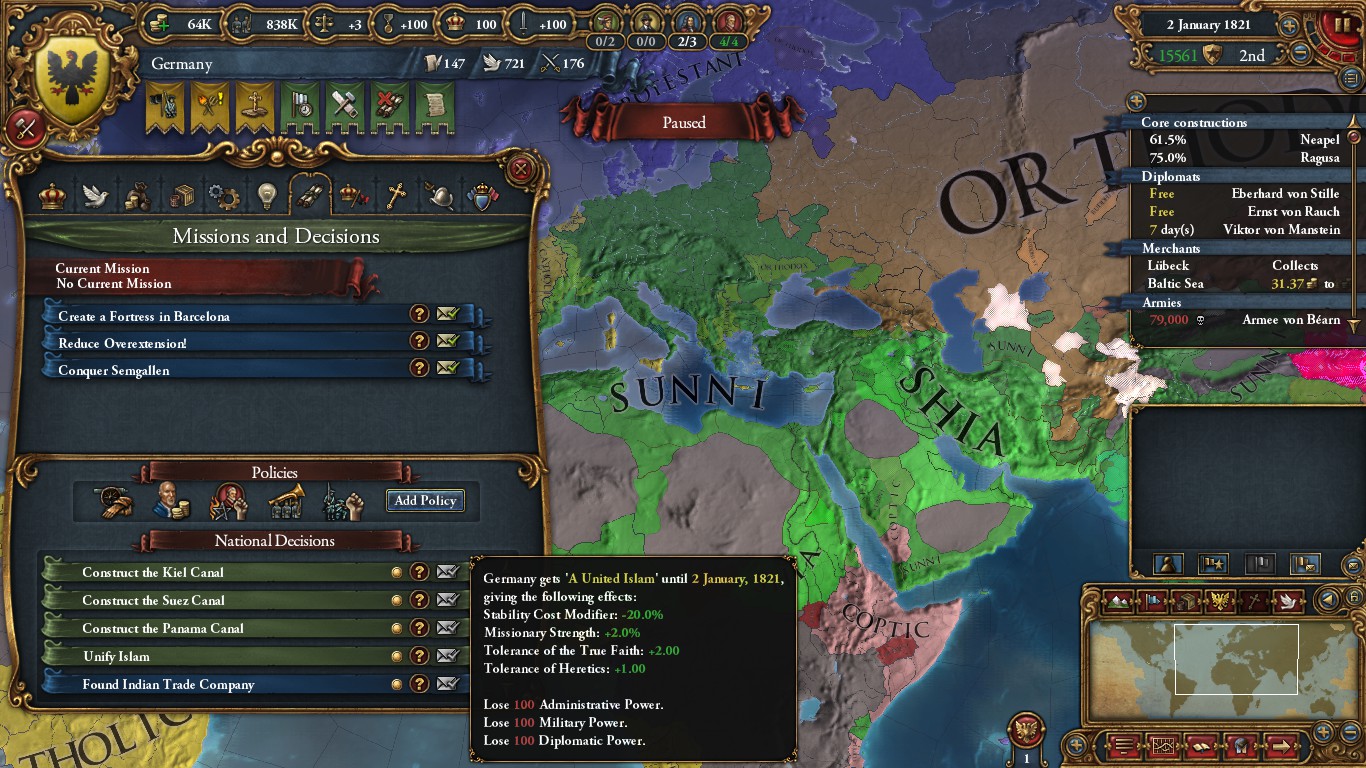 Oh god please use a flag mod to get rid of this disgustingly uninspired Germany flag.
H

Lol, in that screenshot you're the victim of the production income display bug. You should have let the month tick before taking the shot; your income is actually a few orders of magnitude smaller. But still mighty impressive!