Jump to latest Follow Reply
Menu
Install the app
You are using an out of date browser. It may not display this or other websites correctly.
You should upgrade or use an alternative browser.
Crusader Kings II 69629 Bug Reports 19693 User Modifications 10526 Suggestions 5969 Tech Support 6340 After Action Reports
Show only dev responses

They were doing great for about 80 years, even converted about 15 provinces until the Khan died without an heir, then they got inherited by the Chagatai who converted to Sunni after about a year. 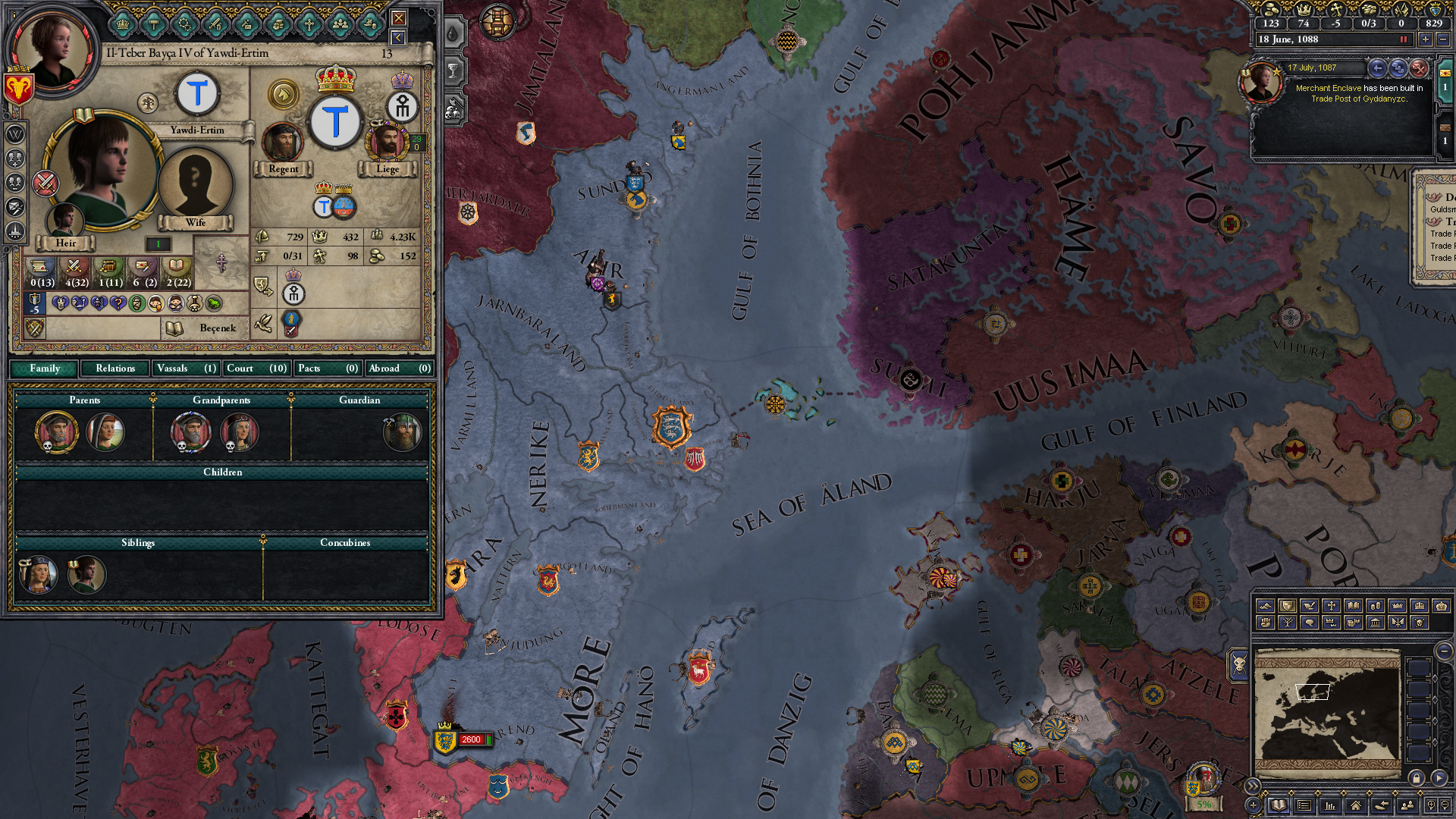 Toggle signature
Market-Socialist-National-Authoritarian-Social-Paternal-Liberal-Conservative-Radical-Centrist-Anarcho-Monarchism is the best ideology. All other ideologies are trash.

And yet he is in charge of a horde, not bad for a 13 year old. Though seriously with that many problems I'm surprised he isn't usurped by an uncle or a rival.
Toggle signature
Imperia Surgere et Cadere, Ego non Facio

SRM = "Yeah. Seducer/Seductress is just getting people in bed. Hedonist is reclining on a bed made of slave girls painted with gold dust while eating chocolate covered grapes off of your concubines' chests and watching your least favorite sister get tag-teamed by farm animals. Seduction focus is nothing in comparison"

he is a strong argument for arranged marriages 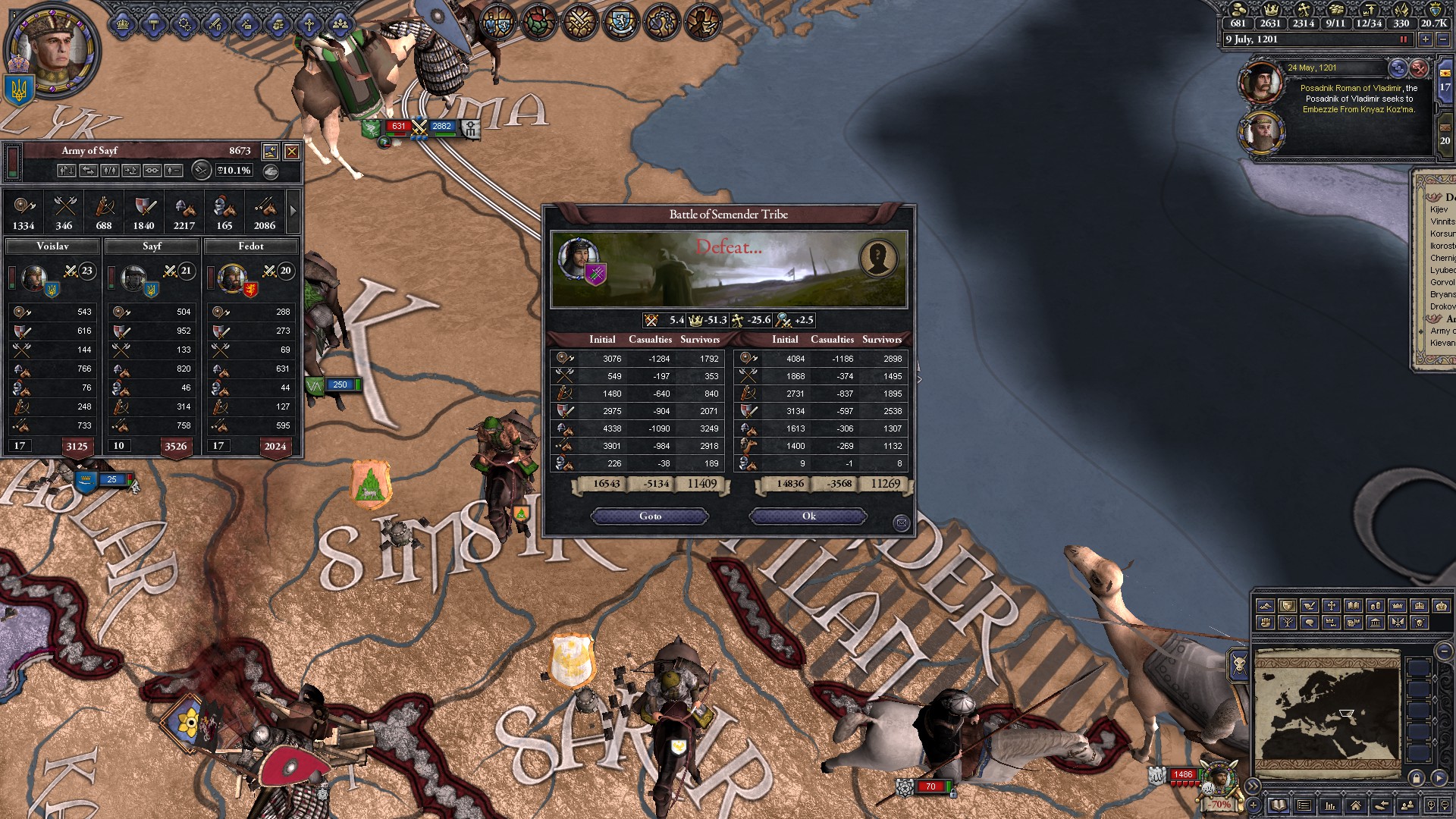 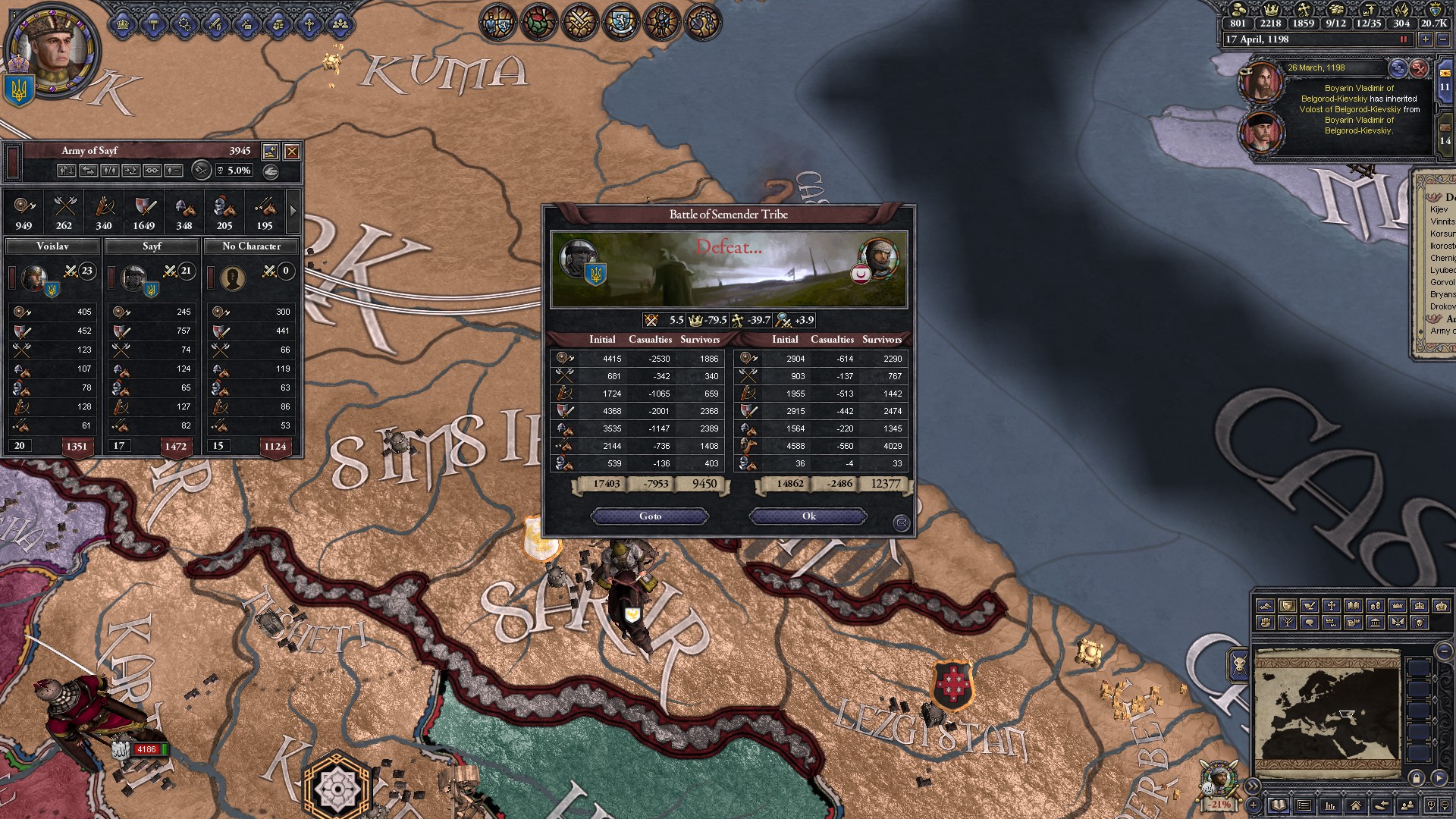 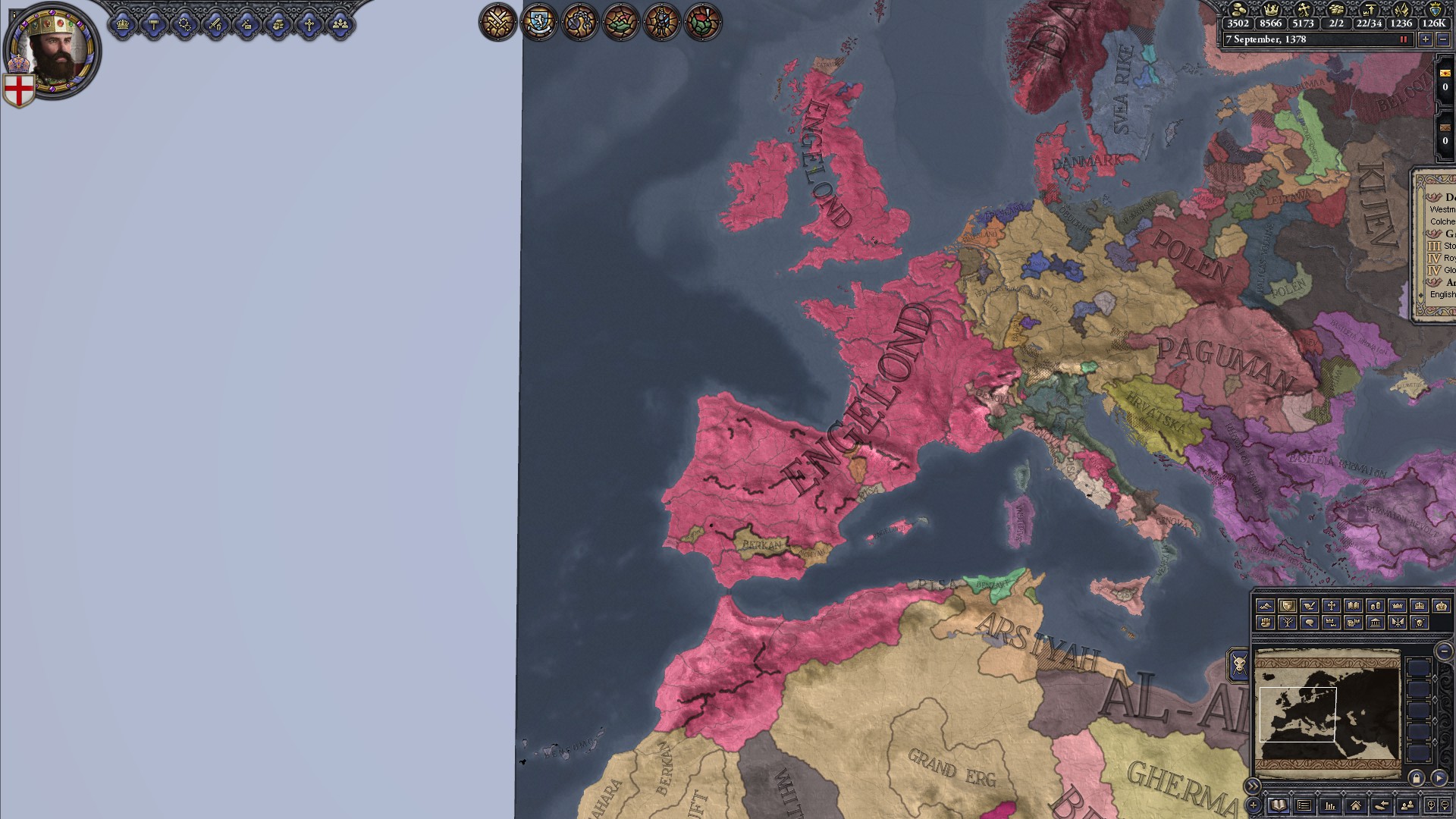 The color though...
Toggle signature
"Why not expand piracy to something more than just black nation steals now your trade power?" - Shimohi the "nyanpass"

So... the AI just formed the Saint-Empire Romain. Is this usual? I kinda want to change houses and play inside it somewhere now. 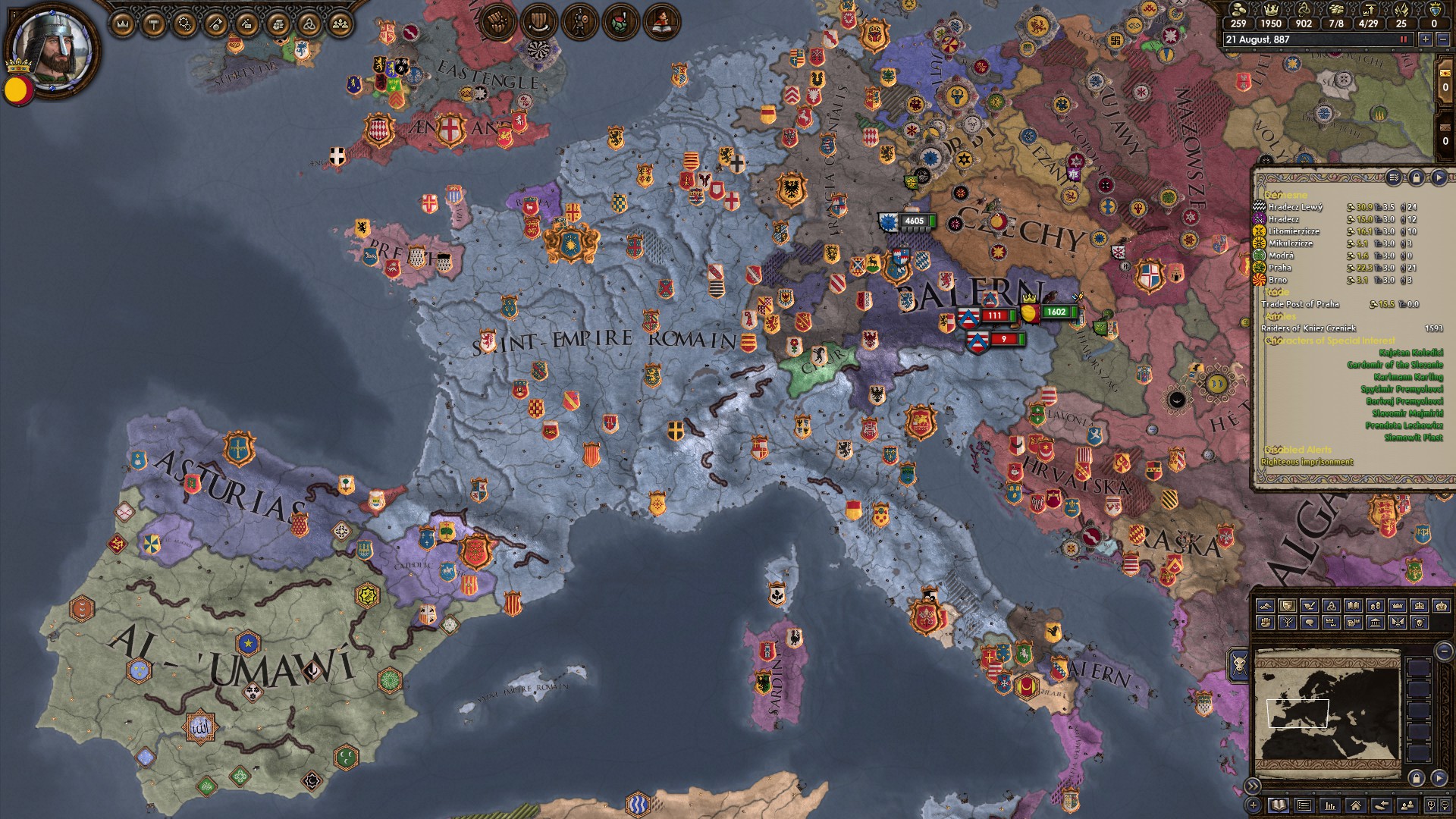 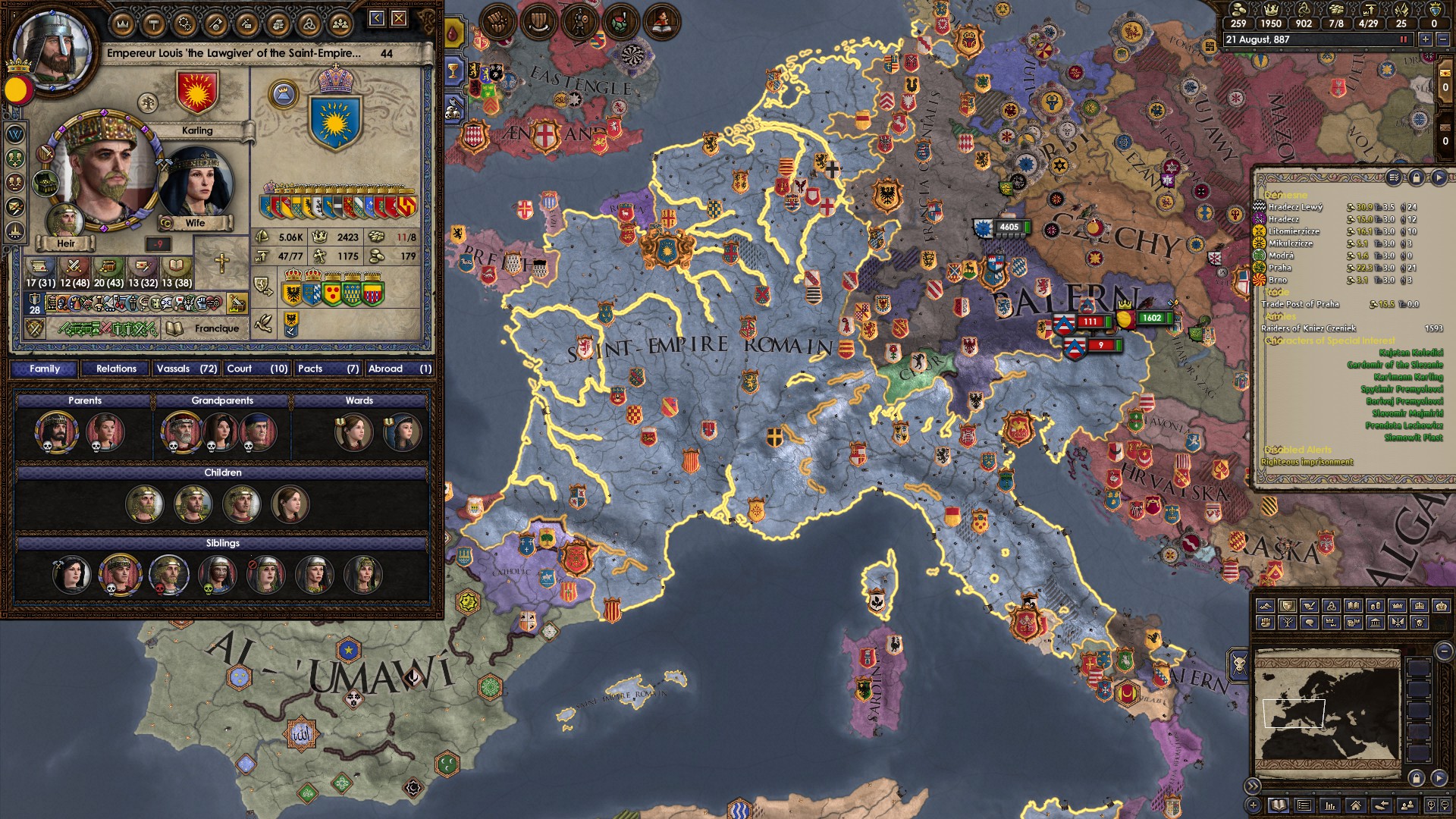 Just thought I'd share my newly-formed Empire of Carthage!

I started as a custom French count of Gallura, aptly naming the family as House de Gallura. After quickly uniting all Sardinia and Corsica in a single kingdom, I spent the next century building up the power and wealth of the family before eventually marching on Africa. Establishing Carthage as the capital of this new Crusader Kingdom, the Grand Harbour of Carthage was built by successive scions of the family; being finished briefly before declaring the Empire of Carthage.

As for the rest of the world, England reigns supreme over the British Isles and the Kingdom of France, while the HRE managed to conquer Poland early on. The Piast dynasty become titular Kings of Jerusalem through conquest, before losing it to the Seljuks. The Byzantine Empire has re-emerged as a world power, after with a little help from a previous King of Africa a exiled claimaint to the Imperial throne, Theophylact Komnenos who incidentally is tied to the House of Gallura via marriage and a Catholic to boot was installed as emperor after a short war. Egypt was then restored to Byzantine control by means of a Crusade by Theophylact and the Piast now-Duke's of Jerusalem submitted as vassals to the emperor, which allowed for the end of the schism not long after!

As for the Mongols, well they converted to Catholicism and are giving the Turks a right rogering from behind! 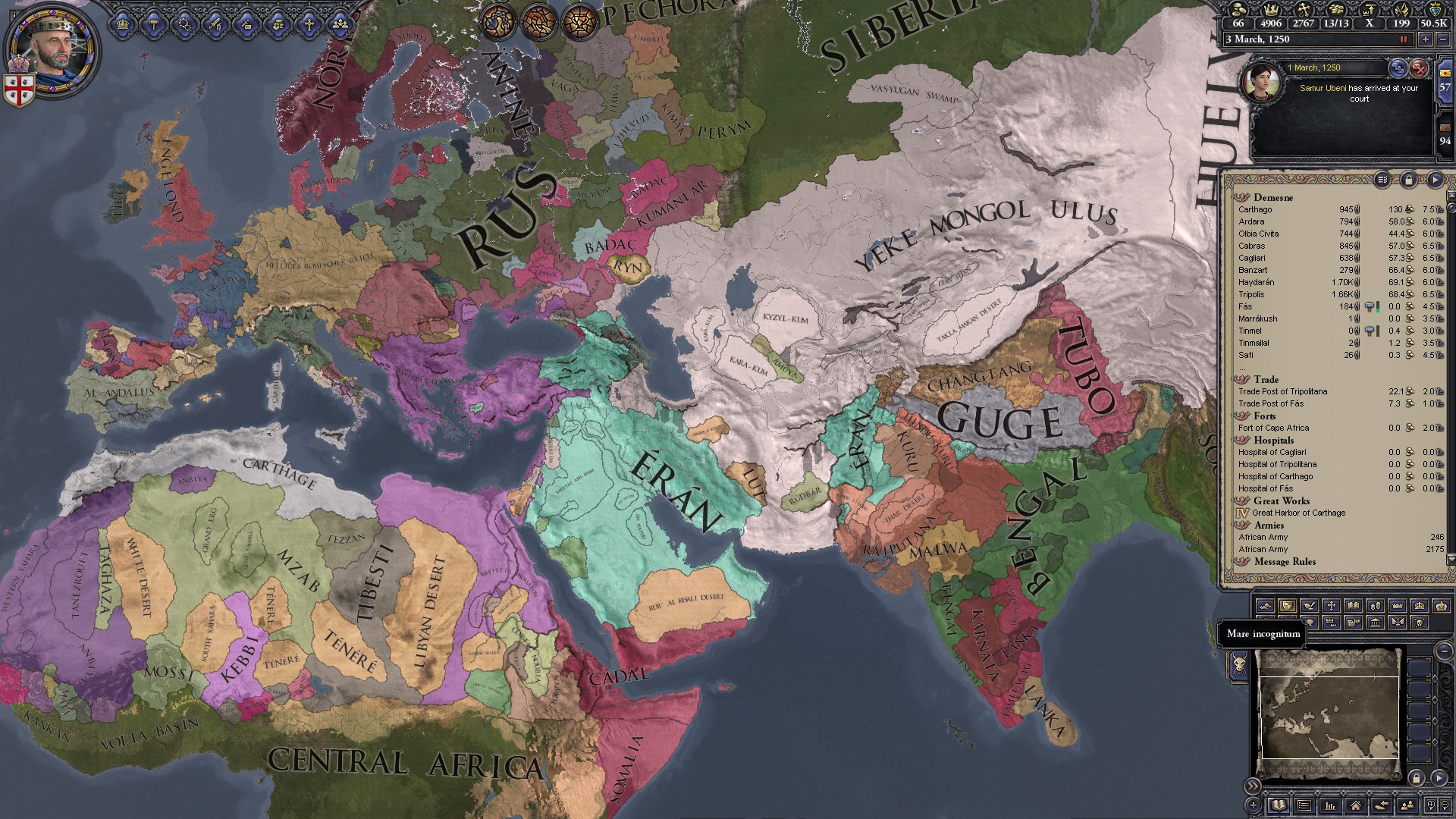 Ferreira said:
So... the AI just formed the Saint-Empire Romain. Is this usual? I kinda want to change houses and play inside it somewhere now.

Yes, look at these empires that AI formed while I was in Russia without interfering with the western part of the map, without any specific events like Crusades. 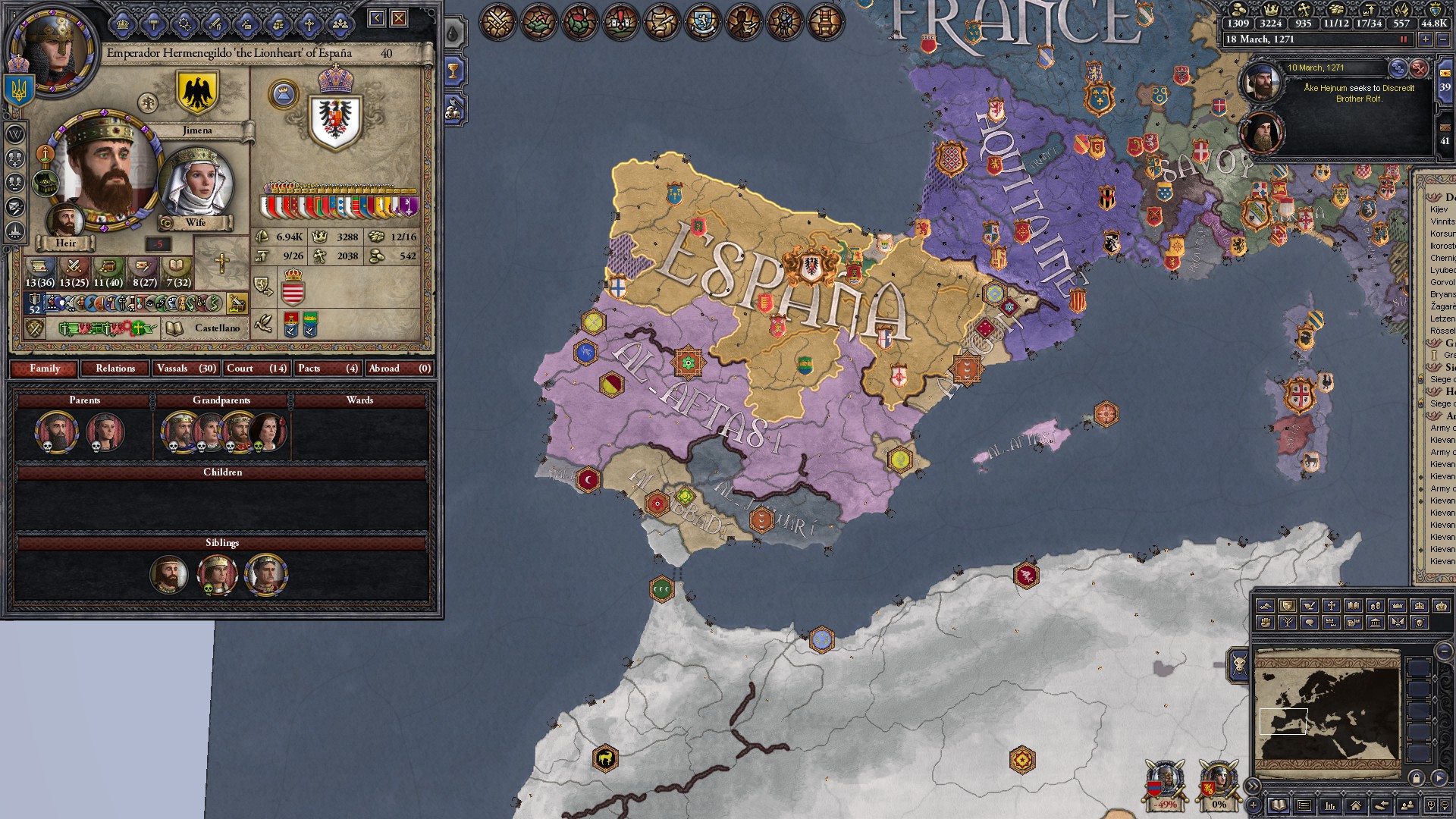 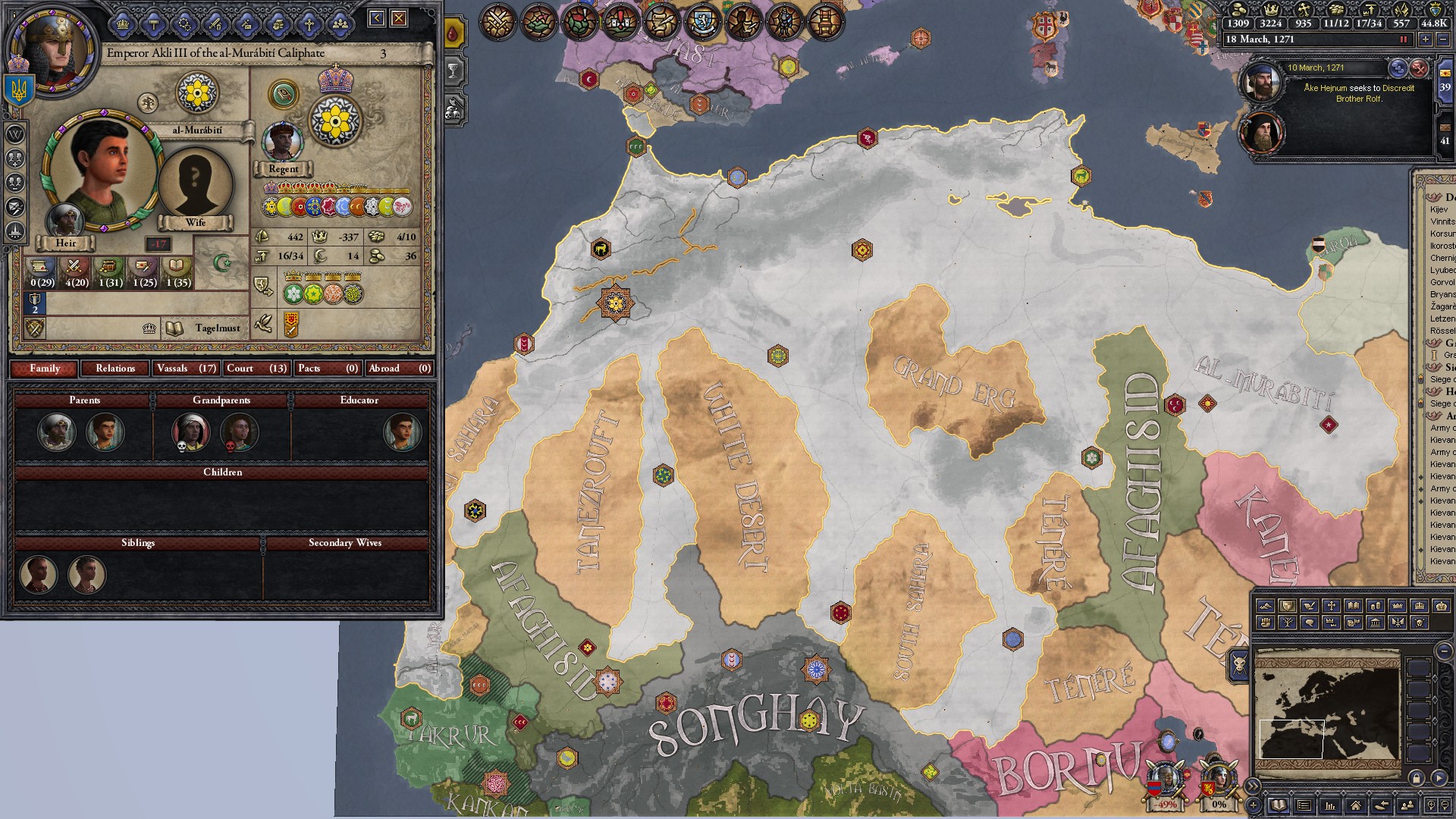 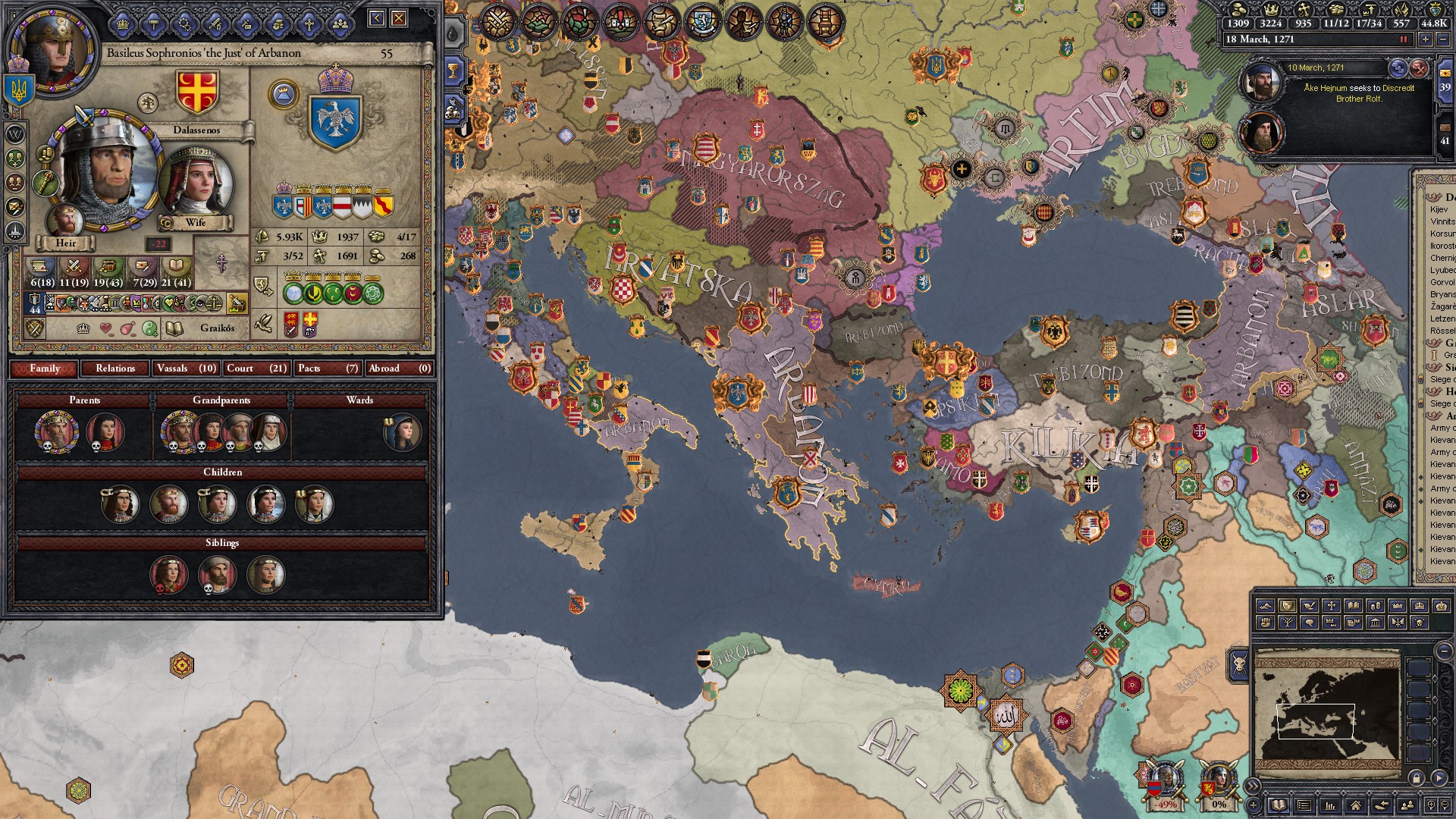 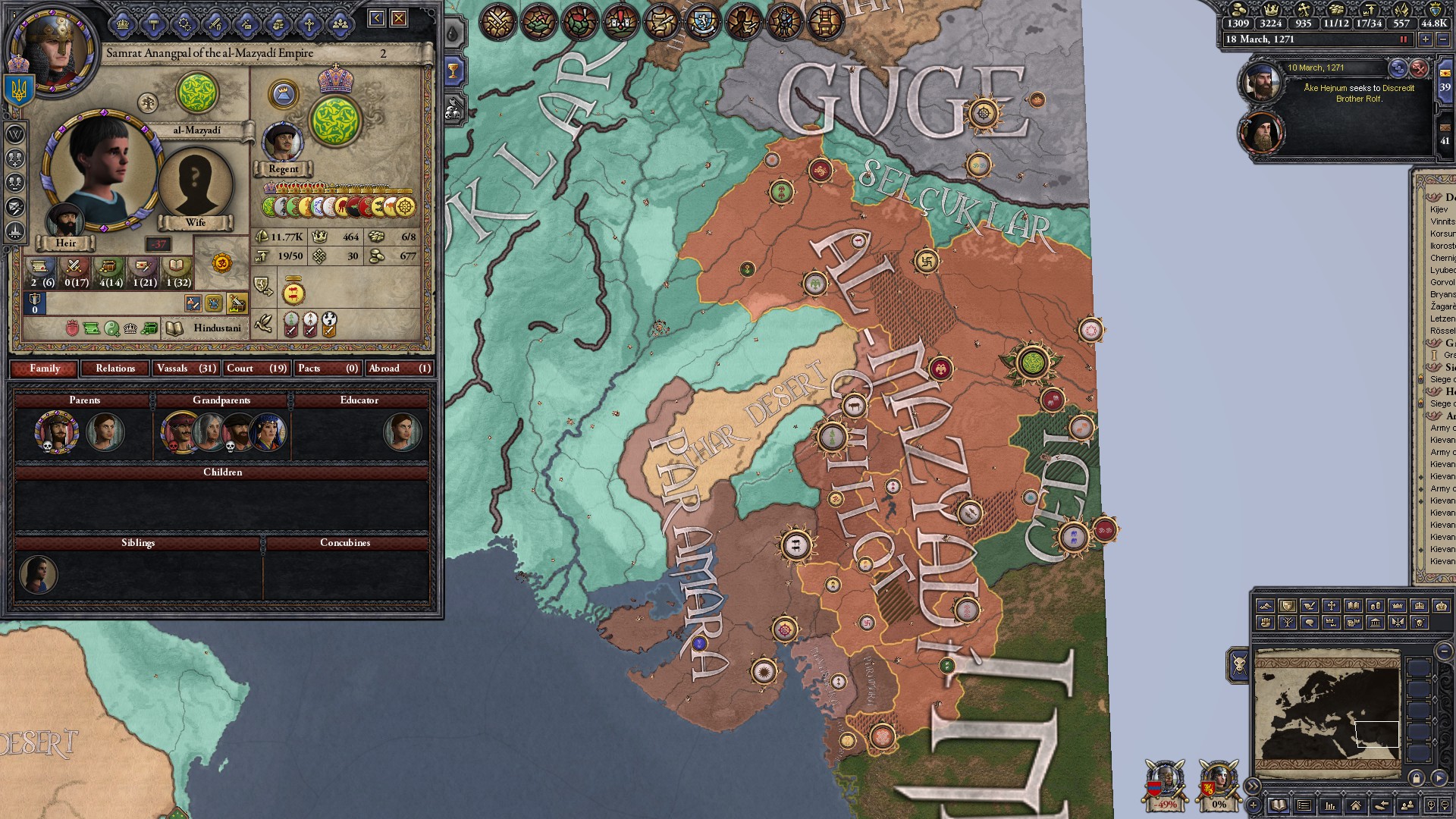 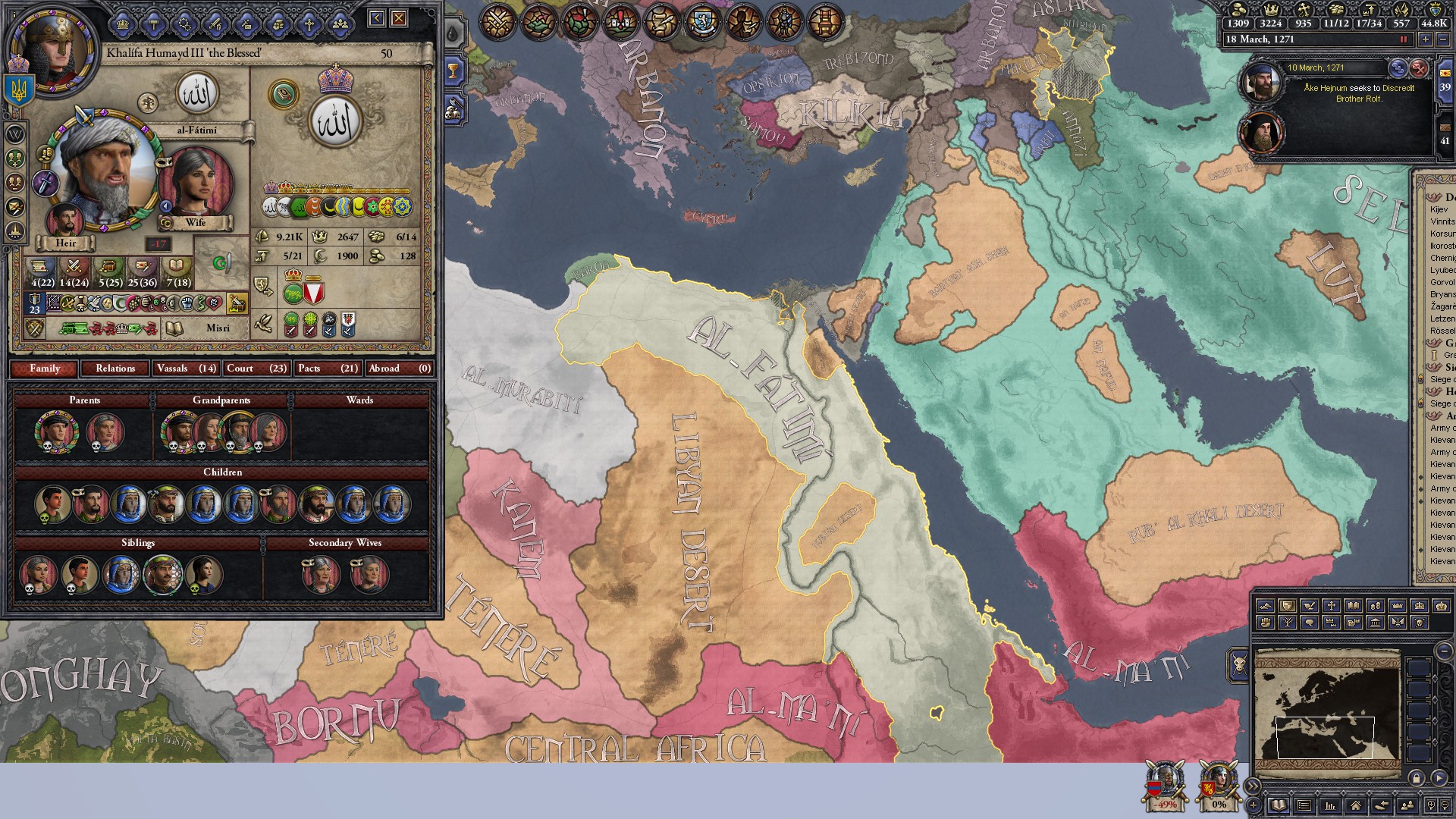 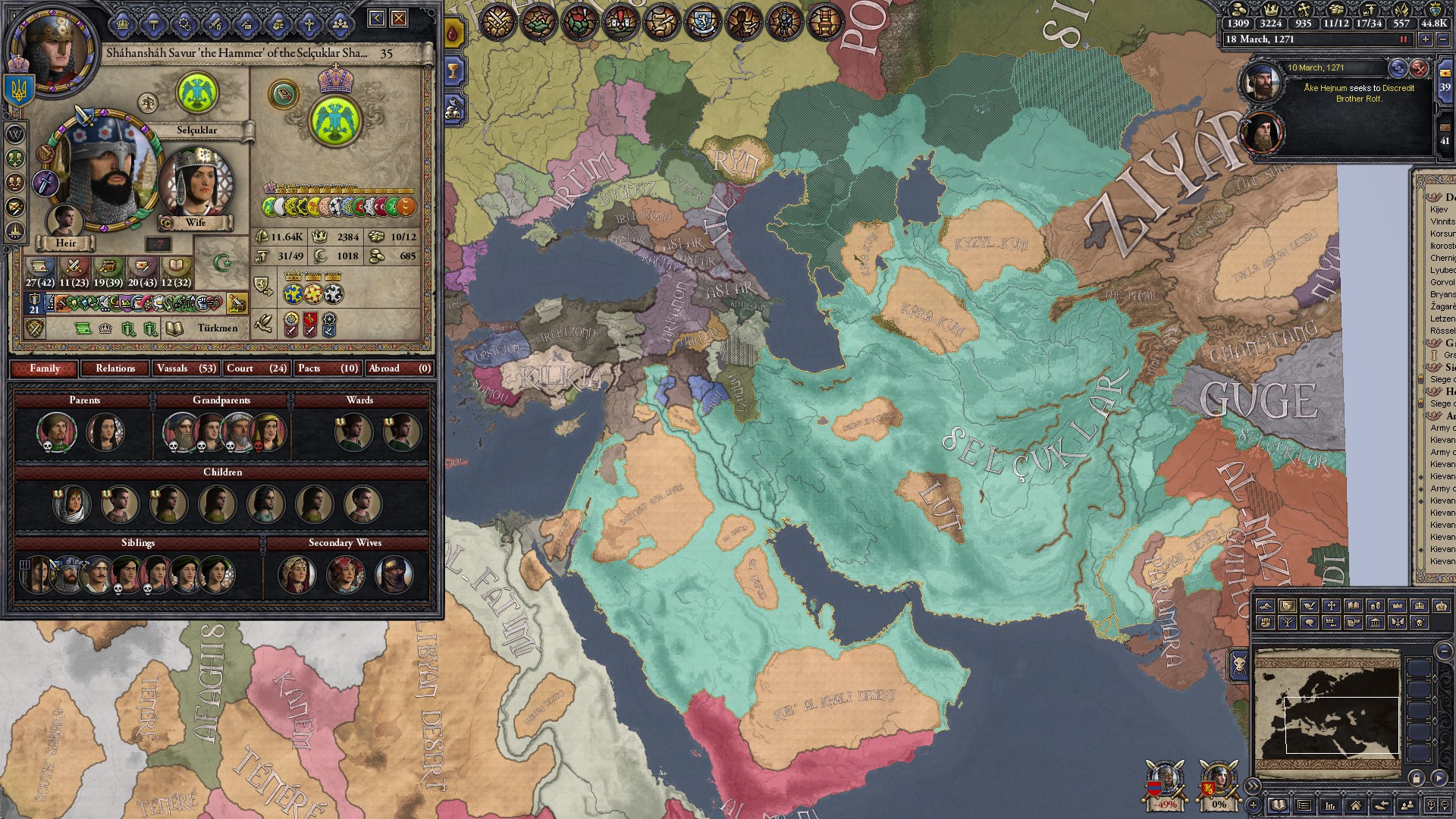 Interesting mapfont, which one is it ?
Toggle signature
Facts and opinions are not the same thing.

Arko said:
Interesting mapfont, which one is it ?
Click to expand...

It's a mod font for EU IV, named A Revolutionary Font Mod - Gothic Steel. I made them work on CK2, the creator didn't do it and another font series for CK2, I wouldn't put it in Workshop without his consent, but it's very easy to convert, and now I've been using Rev. Font Mod - Vanilla Embossed from the same creator.
Toggle signature
My AARs:
Polish Chronicles( 10 Chapters, incomplete )
Tales from Saxony( 17 Chapters, ongoing )
Vance of Wayfarer's Rest( 8 Chapters, complete )
War of House Rocherfort( 26 Chapters, ongoing )
France Through the Centuries( 9 Chapters, ongoing )
Crusader Kings Brasil Administrator, a brazilian community for Crusader Kings Series.
Political ideology: Why not a only single global nation?​

So, uh, the vikings conquered Mesopotamia. Seeing the Norse pop up in weird places isn't very unusual I guess except how well they're doing here. I don't think they've lost a defensive war in like 50 years. They've now pushed their longboats out into the Persian Gulf and started terrorizing Arabia.

In my current game as a Cornish ERE Alba/Scotland has taken over most of Britain, controls Normandy and the North coast of Britany and has France as a Tributary.

It won't last long as a unified kingdom since the current king is really old and they have Elective Gavelkind, but it's still really cool! 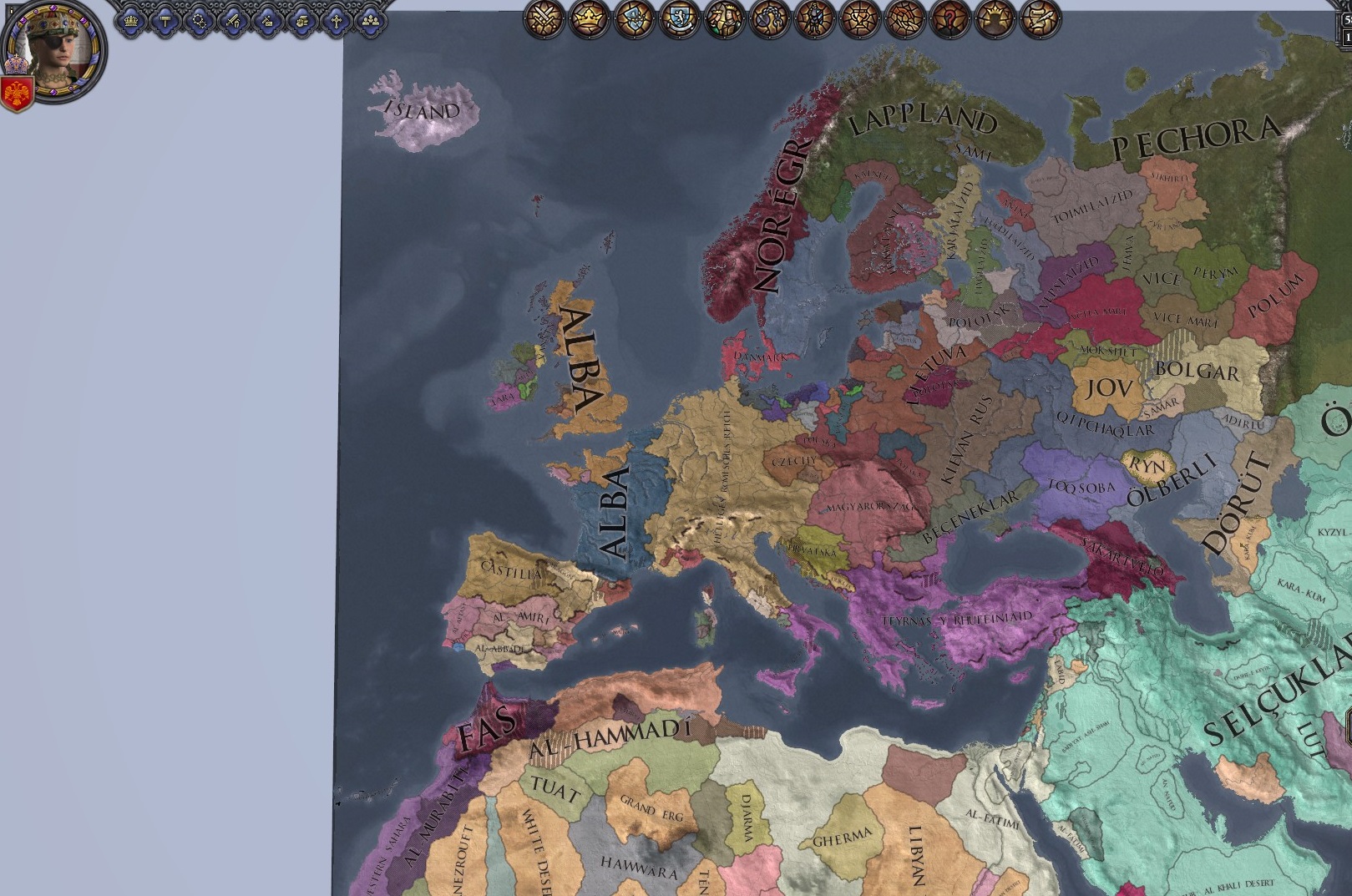 In this game I'm playing as Artoria Pendragon from the Alexiad start date. As you might be able to see, I'm on a bit of a Fate bender.

My role play is that Artoria ended up in Southern Italy just before the Norman invasion of the Balkans. She, using her high charisma, subverts the Norman cause for her own purposes. She then invades the ERE and defeats Alexios Komnenos and installs herself as Emperor of the Romans and introduces more Brythonic influences into the Empire. In order to mollify the Greeks somewhat she adopts the Eastern Rite. She however, invites her fellow Britons into her Empire with the promise of land.

From the 1090s on Artoria made it her mission to reconquer Anatolia to settle it with Britons as well. By 1126 this has by and large been successful. She has also largely secured Southern Italy and made efforts to secure the Danube frontier.

Her next goal is aimed eastward to secure Roman Armenia as it was before the Turkish Invasion. Her immediate goal however is to more firmly secure the Balkans and Southern Italy as a prelude for further conquests later down the line.

Edit: The Scottish Freedom Empire just collapsed.
Last edited: Oct 7, 2019
Toggle signature
PDS Rules of Thumb:
A Patch/DLC bundle is NEVER Savegame compatible.
There is NO Mod that can update upon day of Patch/DLC release.
Jupiter is a yandere.- aruon
I'm just Danish. Mistrusting Sweden is my default setting.--Moglus
U

I am a madman. I reformed the Roman Empire and completed all six tiers of reconquests. That was extremely tedious, but I at least have some screenshots to show for it. The path was very long.

I began in 867 as the 3-province Znaga guy south of Sardinia. Because Znaga is a raiding culture, I planned to invade Sardinia and pump it full of money for centuries. I immediately did a holy war for Sardinia and switched to Catholic to stop reconquests. Then I sat and raided... and raided... and raided. I eventually had level 4 great works in every province of Sardinia/Corsica along with tons of amazing artifacts (bones of Saint Peter, holy prepuce, various weapons, etc.) In the 12th century the crusades started, and I easily won all of them, taking the titles for myself. That's how I got all of Iberia. A crusade for Jerusalem was redirected by Venice to attack Byzantium instead. I won that, established the Latin Empire, put my son on the throne, killed him, invaded, and made myself Latin emperor. After that, I just needed to spend several centuries conquering. I was able to annex all of Lombardia, Germany, and France by installing pretenders who would become by vassals. Through other crusades I was able to get Palestine and Egypt (wow, those late-game crusades/jihads are huge!). After getting Jerusalem I mended the Schism. I also made copious use of papal claims. I had more or less constant +100 relations with everyone due to all my artifacts and wonders, so I never had any civil wars. By the 14th century the game had become so laggy that I thought about quitting, but I continued to see what would happen when tier six is completed. Nothing happens. It was very disappointing. Anyway, here are the screenshots! My prestige was near 0 because I was truce breaking frequently due to losing patience.

So the Saint-Empire Romain a.k.a. French HRE formed and, after some years, THIS happened

von_goethe said:
So the Saint-Empire Romain a.k.a. French HRE formed and, after some years, THIS happened
Click to expand...

What?
Toggle signature
PDS Rules of Thumb:
A Patch/DLC bundle is NEVER Savegame compatible.
There is NO Mod that can update upon day of Patch/DLC release.
Jupiter is a yandere.- aruon
I'm just Danish. Mistrusting Sweden is my default setting.--Moglus
Show hidden low quality content
You must log in or register to reply here.
Share:
Facebook Twitter Reddit Tumblr WhatsApp Share Link
Top Bottom