Playing with fewer, but statistically more powerful, armies feels much better as you dont have to spam so many.

Menu
Install the app
You are using an out of date browser. It may not display this or other websites correctly.
You should upgrade or use an alternative browser.
Stellaris 42868 Bug Reports 23131 Suggestions 13077 Tech Support 2175 Multiplayer 326 User Mods 4131 Stellaris AAR (After Action Reports) Console edition 934

So I've been testing a tiny mod that makes the below scaling changes, essentially all armies have 5-10x their vanilla stats, costs and 2x build times. This means that on average you'll only be building 1-5 armies rather than 10-50 armies for various invasions. So, less clicks. And, to me, it feels quite nice - particularly when I got hold of clone armies and no longer had to build nearly as many to get the job done.

Code:
Still need to play to late game to see what late-wars are like, and how the AI handles it, as there are a few ways it tries to control its num armies, but not click-spamming 100 times feels a lot nicer already. 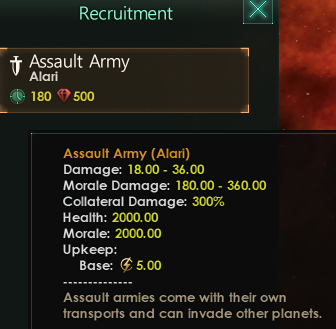 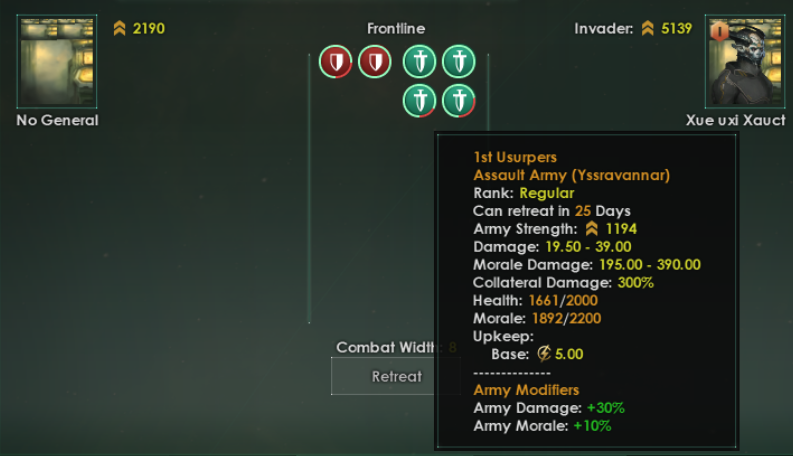 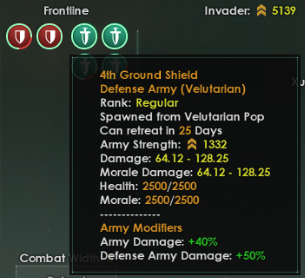 Define changes to make next

Code:
It's worth noting an interesting side-effect of increasing army HP/DMG across the board, based upon the below defines (unchanged) my armies (above pics) after a single battle against a handful of enemy armies are "experienced". Army %modifiers also have a larger impact as they work off a larger mathematical base now.

It normally takes a good bit longer than that to get them ranked up (not that most people notice, or care, about army-unit ranks, tbf). Generals still rank slowly. Not sure if i should tweak these defines or leave them as is, I kind of like having faster army XP, and only using handfuls of armies in general means I might (occasionally) pay attention to such stats.
General XP could do with a buff though. Maybe Passive XP for generals set on planets ("drilling Defence armies") should be a thing - doubled rate if a military academy is present.

One other thing that might be nice for flavour is auto-spawning a rank 1 general at the start of a battle for defending worlds under attack, making this a rank 2 general if any fortresses present / if it's a stronghold world and rank 3 if a military academy is present, and then removing them again at the end of the battle.

Also trying to see if I can cut off 100% of resource output, trade generated, pop upkeep, district upkeep & building upkeep from occupied worlds.

Code:
However altering the static modifier for occupation doesn't actually seem to do anything. May need to write up an event that adds my own "occupation" modifier - though this is more effort and is starting towards adding occupation levels, like using decisions to control how brutal/cooperative your occupied armies are on a world vs the locals (and possibly adding partisans/resistance fighters on occupied worlds, maybe influenced by occupier/local ethics - could be cool with 3.0/espionage).

And thats pretty much all that you can do with modding armies right now, it seems, without getting into bigger changes like

I've tried the ship number rebalance mod in the past and, while it didn't feel perfect, it was a similar experience. Less spamming makes individual units feel more important and unique.

I think this especially important for armies, since most of the time, the biggest interactions with armies throughout the game is queuing up a bunch of them on core planets before a war and having to wrangle them into a group.
Reactions:

DC E1G said:
I think this especially important for armies, since most of the time, the biggest interactions with armies throughout the game is queuing up a bunch of them on core planets before a war and having to wrangle them into a group.
Click to expand...

Precisely what I hate about it too. Its the click-spam I loathe - I dont mind giving them orders, though I've got a few ideas about that too - like writing automation scripts that essentially put all your armies into a vassal nation, at the start of a war, that will bum-rush any worlds in systems youre occupying, handing the armies back to you (and giving them orders to fly to the nearest sector capital) at the end of the war.


DC E1G said:
I've tried the ship number rebalance mod in the past and, while it didn't feel perfect, it was a similar experience. Less spamming makes individual units feel more important and unique.
Click to expand...

I came to the same conclusion when I tried it too. However with 3.0 I realised that its possible to impose dynamic ship caps per ship class, thanks to how numerical values can now be read, manipulated and applied as variables (in this case, levvied as a limit on the UI preventing extra ships being built - or triggering sanctions/debuffs if over a certain #battleships, for example).
That, combined with a general reduction in #ships may well lead to this feeling "good enough" for navies.
Toggle signature
Mods: Leafless Plantoids (Replacer) * Cleaner Occupation Markers
Suggestions: Connect favours to more game-systems * Hivemind civic: Spore Warriors * Portable Gateway Ships * Add Federations trailers Blue alien* Unity V Influence Overhaul * Changeable GC Voting Protocols
Modding discussion: Wormhole Drive Tests. 2.8.1. Proof Of concept. * Improve Pop Job Allocation by checking country resource income * Pop Faction Modding Bugged
Imperator: Dark and Purple UI Reskins.
Reactions:
I

Pancakelord said:
This means that on average you'll only be building 1-5 armies rather than 10-50 armies for various invasions.
Click to expand...

I wish they would remove the army system and make it a subslot on ships so you are always carrying around some troops. It just doesn't feel engaging to build out armies, and I think it would make the AI better at conquest.
Toggle signature
https://forum.paradoxplaza.com/foru...es-or-in-city-skylines.1411171/#post-26798868 ~ One of the greatest posts ever.

I’ve always been tempted to try and add new unit types to ground combat. Stuff like infiltrator units which deal damage against units which are in reserve or assassin units which increase General fatality rates.

Then I look at the limited scope to do anything with an army entry and move on.
Toggle signature
Improvements I’d like to see:

TRAITerous envoys as full characters.
Return Defence Stations and Fortresses. Allow them, Defence Platforms and Ion Cannons to move (SLOWLY) around the system. 50% chance on 0hp of disable or destroyed.
More civics for megacorp, machines and hives.
Implement some civics which can be used across standard and certain dlc authorities.
Implement actual differences between how dictatorships, oligarchies, democracies and imperial nations put decisions, policies and edicts into place.
Implement planetary and sector governments.
Point Defence for colossi.
Reactions:

Looks interesting! I agree with the intent and would like to see how it develops with the 3.0 release.
Toggle signature
1200 Days - Gramps' run at a Kerensky rated career | Gramps' run through the Hyades Rim campaign

InvisibleBison said:
I must be missing something, because I don't see how this conclusion follows from the changes you've made. You haven't changed the relative power of assault and defense armies, so why would the number of assault armies needed to defeat a given number of defense armies change?
Click to expand...

Truth be told it isnt 100% clear why to me just yet, but having played a century or so I've been using fewer armies generally and so has the AI, and its been more of a breeze to manage them, when I need to "top up" it's just a few clicks and I'm Gucci, with another 5k armies.
Whilst I'm not totally sure on what the root cause for this "better feeling" is, I've come up with a theory that boils it down to 2 main factors (with #2 being the biggest factor IMO):
So scaling everything up doesn't reduce or change the relative balance of the armies, it essentially reduces the ... resolution of army fleet power you are working with, when everything is 1k "blocks" of army power, 1-2 extra armies (1-2k extra FP) is all you need, that's just 1-2 clicks more, rather than the, potentially dozens more you might need to buy to get to a comfortable 10/20/30% increase over enemy Army FP.

This is why, despite mentioning making defines changes to the army calculation in my OP, I'm not going to de-scale army FP calculation anymore, as I think this has a pretty big impact on AI decisions - and in truth, unless I'm specifically trying to crack an FE world or some modded fortress world, I usually am reactionary with my army building, just seeing what the AI has and pumping out, say, 20% more FP to guarantee a win (with 20% more just being 1-2 more armies/clicks in most cases now, rather than 20+ sometimes).​

Etrutian said:
I wish they would remove the army system and make it a subslot on ships so you are always carrying around some troops. It just doesn't feel engaging to build out armies, and I think it would make the AI better at conquest.
Click to expand...

I Agree that it could be much more convenient.
But people tend to overlook the fact that - unless this is a free slot on ships (either just Destroyers or everything corvettes to BBs, say), You will need to surrender some fighting power (a weapons slot, a shield/armor component, an AUX slot etc) - and then you'll essentially realise you're better off running 2 separate designs - one that actually fights ships, and one that just carries your troops - and then you realise your troop carrier isnt fighting anything, so you might as well just get rid of guns and armor etc.... and now we have army ships lol.

Alternatively, if every ship can carry armies without compromising fighting power, you get 2 things happen:
And, perhaps worst of all, it would have to be made to work reliably with the ship designer - for the AI, otherwise it'll never capture worlds at all (at least now, it can be told go build X army ships with clearly defined costs and roles) - when these are relegated to components and different sections and fleet AIs all get mixed in, I dont have much hope that it'll end well, in practice.

So yeah it would be better, for the player to use, but it probably still wouldn't be as good as everyone's hoping.

I agree, there are so few hooks for ground wars stuff.

Fire a one-off event on the start of a war (on_war_beginning = {})
that then fires an event which re-triggers every - say - 10 days,

it immediately aborts if it sees no occupied planets in the war-space with has_ground_combat = yes,​
if it does see one, it fires a sub-event that fires each day (or every 2 days) that runs:​
trigger - does "assassin" exist (either an actual army unit, a planet modifier, or - hell - some kind of intelligence operation in 3.0)?​
No? abort.​
Yes?, roll a dice 1-20. if you roll a 20 (either like this as a 1-off, or with lower odds every 2 days till that combat ends - emulating the assassin killing them in combat)​
play that event popup​
general dies.​
damage morale of all remaining planet-side attackers (scope to the attacker country and cycle through all armies on that world from the dead general's country, applying whatever modifiers you fancy, clearing them on combat end)​

This seems pretty reasonable. Kinda wish it was like this in vanilla.

When it comes to these armies you just want to have the minimum you can use to take every world. Often that can get into the hundreds. Seems fruitless for no reason and they're so cheap you're just gonna spam that button.

And combat width bottlenecks you forever after a point.
Toggle signature
Current mods:
Four Nations - An Avatar: The Last Airbender Mod
After Earth - A Humans Only Mod