Play a full game as a OPM

Menu
Install the app
You are using an out of date browser. It may not display this or other websites correctly.
You should upgrade or use an alternative browser.
Europa Universalis IV 74301 EUIV: Suggestions 15608 EUIV: Technical Support 5509 EUIV: FAQ & Strategy Guides 170 EUIV: AAR's, Let's Plays, and Fan Fiction EU IV: Alternate History Short Story Contest Contr 26
A

I started one recently as hamburg, it's boring. Though it's funny to get 1XX dev from one province and work on the trade, also i got around 90 FL.
Also in this game austria became mad and ate most of the HRE PLC Otto and russia 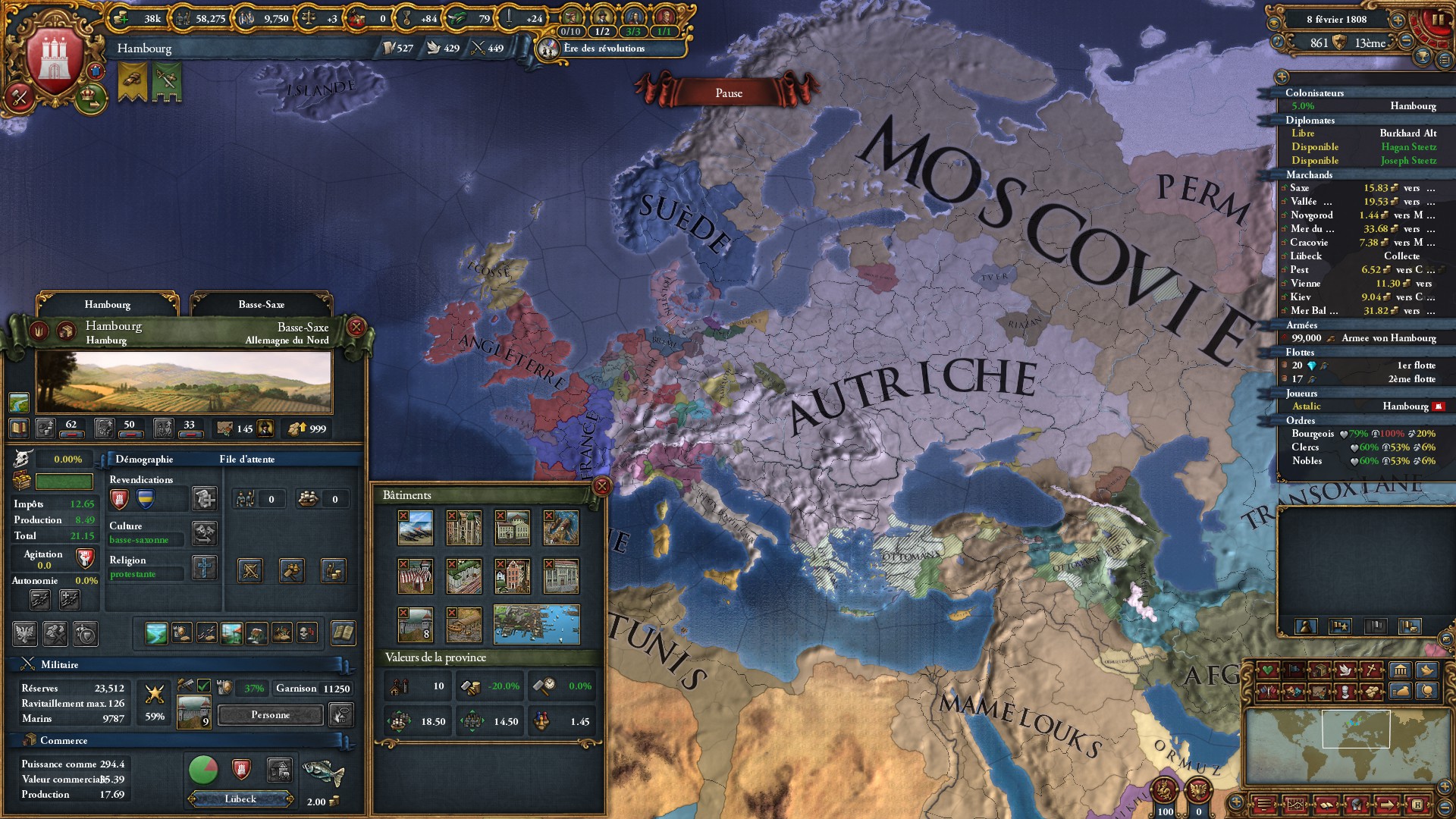 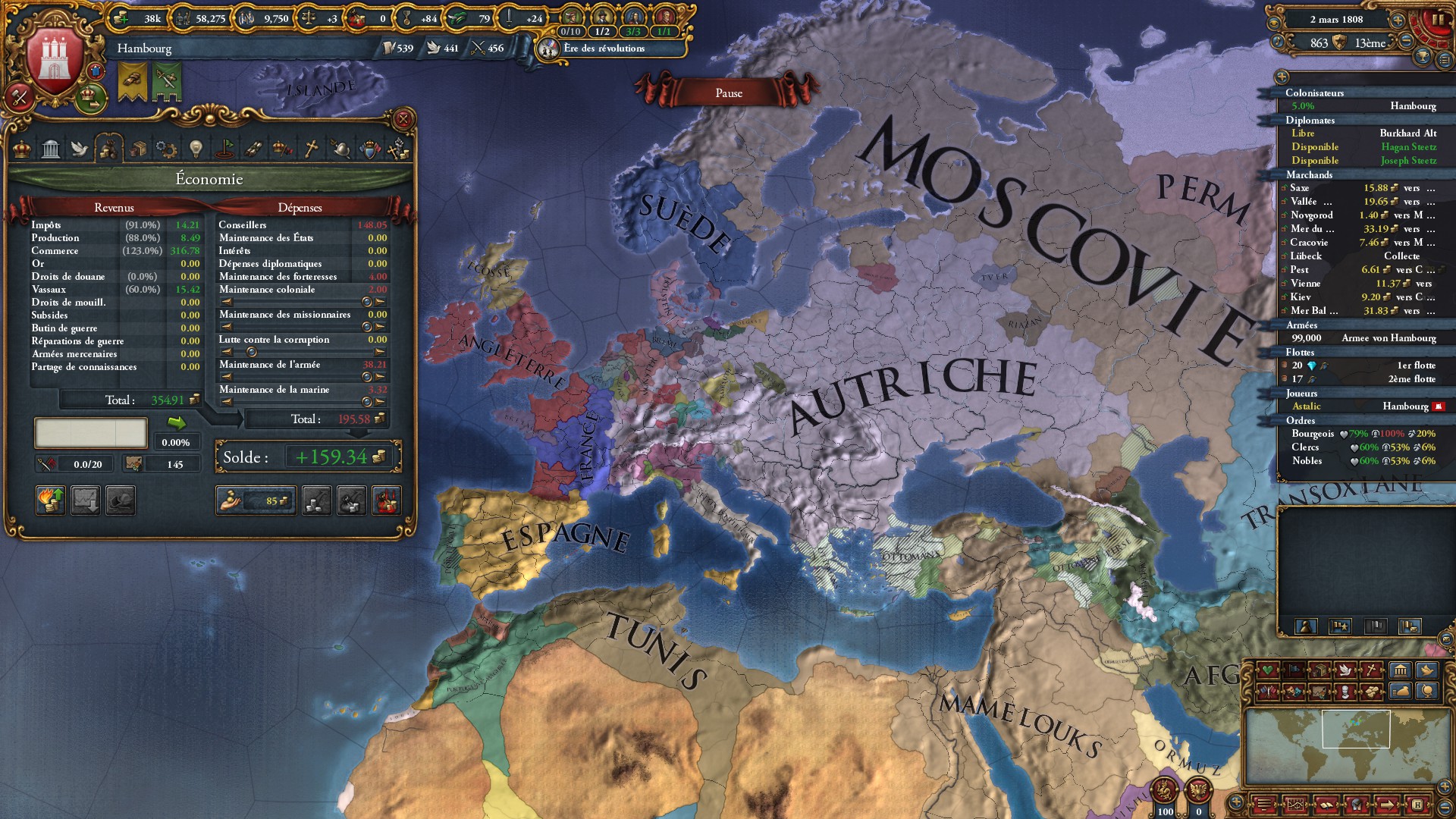 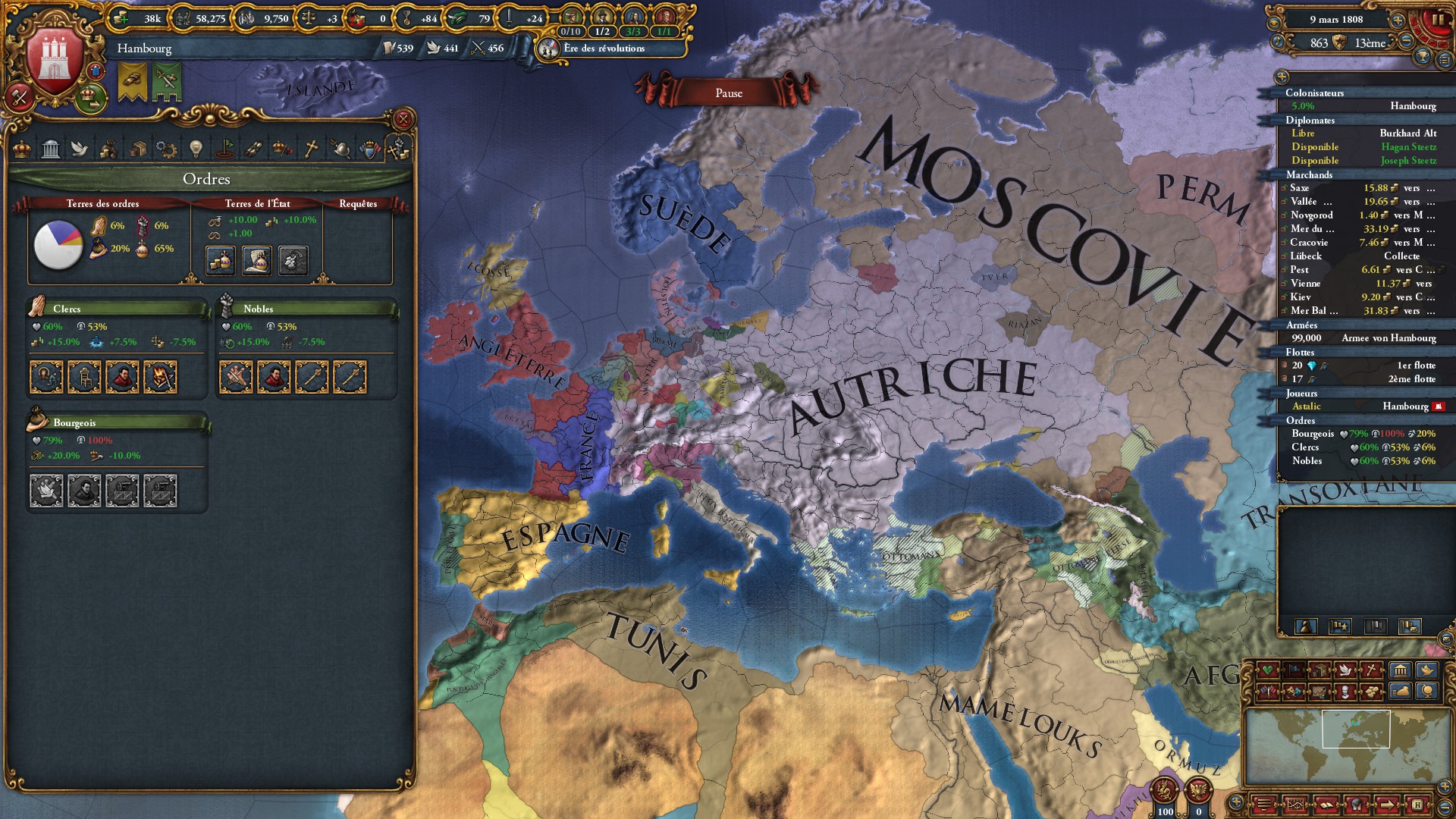 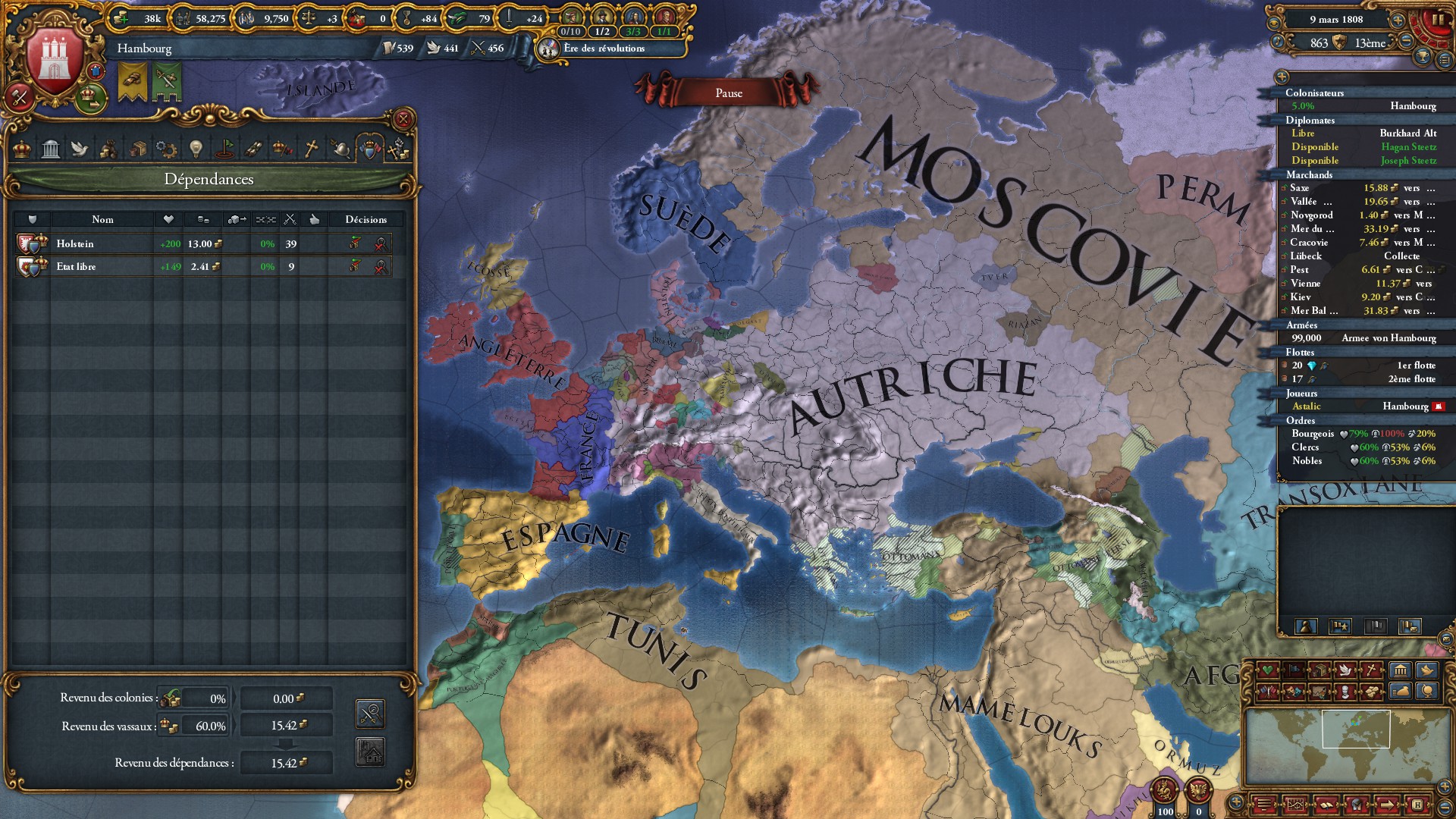 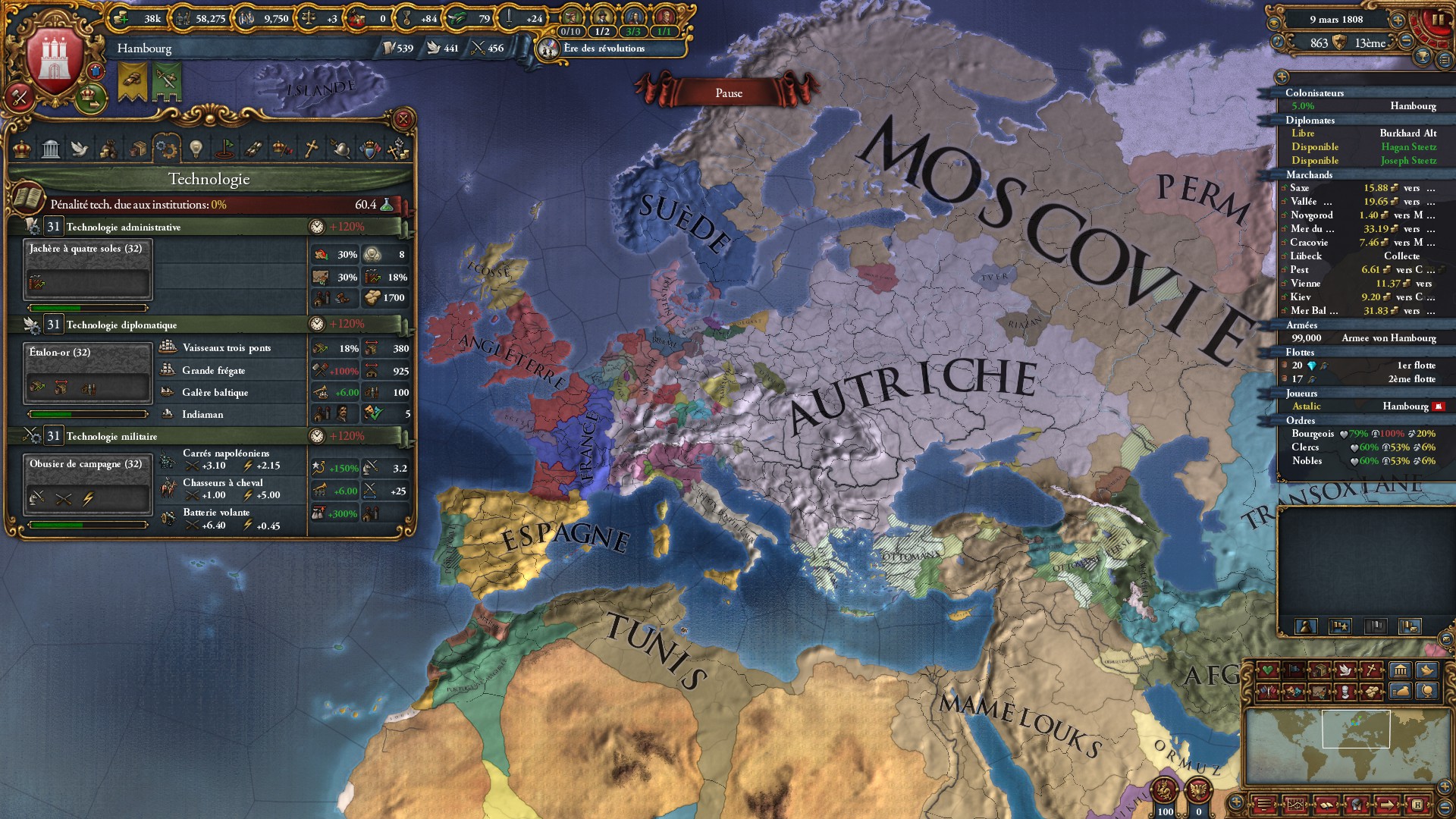 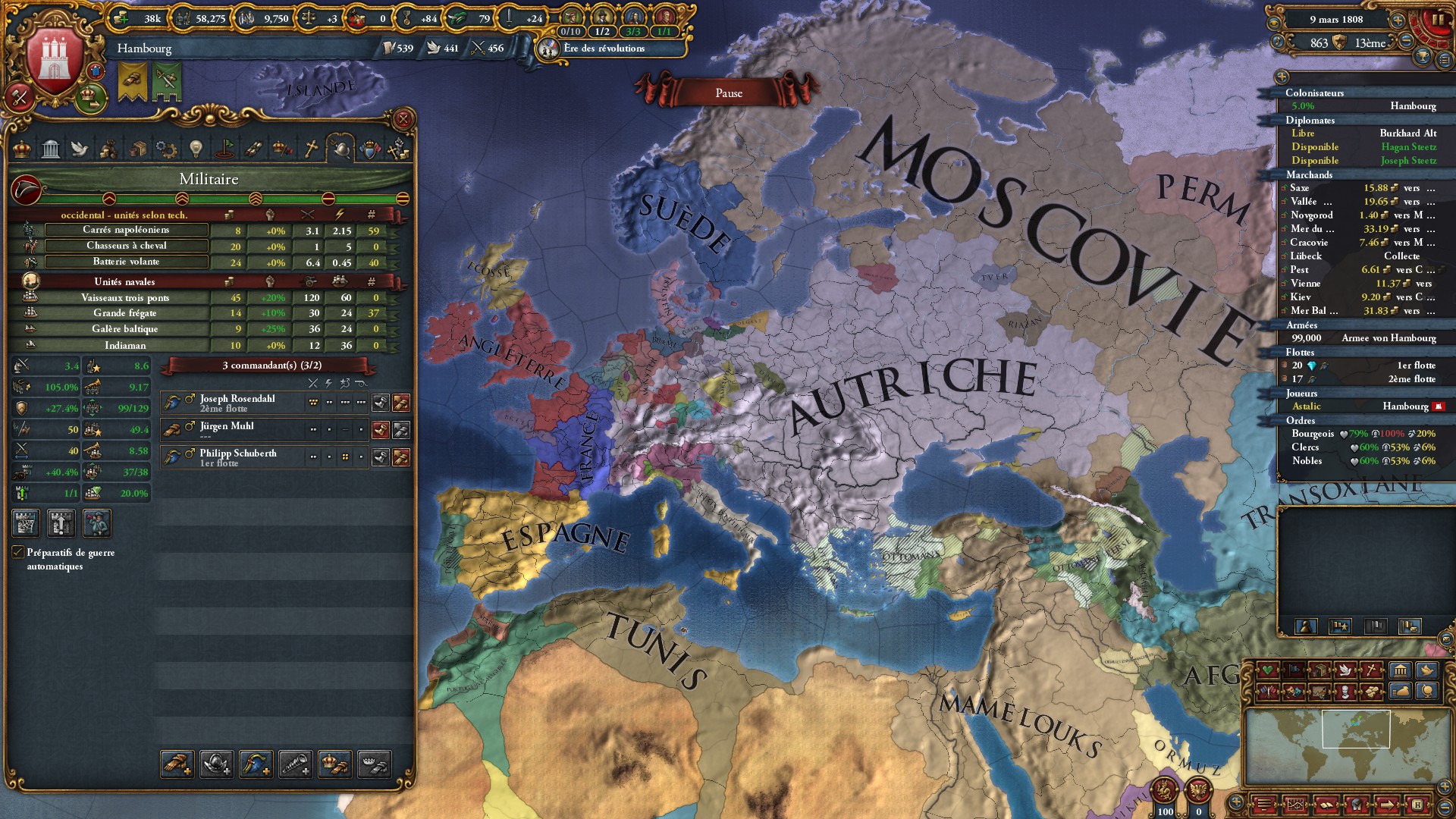 Does reducing Hormuz to a OPM and blocking the straits with galleys for 350 years to get Strait Talk count?

it was a little nerve racking until I had the development to run a galley fleet, annd mildly amusing for a while afterwards when the AI persisted in declaring war on me because i had no army, and losing the war because they didn’t have a fleet and I always controlled the war goal. Then it got boring

I also did it recently because I wannted to try out the Free City exclusive goverment reforms. I tried several HRE OPMs before realizing that the biggest constraint is actually income, which led me to settle with Hamburg. It gets a bit boring at times, but in the end I was able to rival and humiliate the Ottomans without using any allies, so there's definitely potential there. As others have mentioned, the trick is vassals, they give way more force limit than you could ever get through developing your one province.
Reactions:

RobbieAB said:
Does reducing Hormuz to a OPM and blocking the straits with galleys for 350 years to get Strait Talk count?

it was a little nerve racking until I had the development to run a galley fleet, annd mildly amusing for a while afterwards when the AI persisted in declaring war on me because i had no army, and losing the war because they didn’t have a fleet and I always controlled the war goal. Then it got boring
Click to expand...

It does sound quite boring like that, I was thinking about doing a Hormuz Island only run for the achievement.
Toggle signature
Not a native-English speaker, so pardon my english

For help with your game you can always PM me!
M

It's fascinating to see OPM world domination, but also rather absurd that it can be done at all. Continent spanning vassals should not respect an OPM overlord.
Toggle signature
Sit now there, and look out upon the lands where evil and despair shall come to those whom thou allied. Thou hast dared to mock me, and to question the power of France, master of the fates of Europe. Therefore with my explorers thou shalt see, and with my spies thou shalt hear; and never shall thou be released from vassalage until all is fulfilled unto its bitter end.

@peterju A Hormuz Island only strategy works, I opened maritime and naval, before collecting the 6 idea groups needed for the dip rep policies. Sailors household was the manufactory slot, delete your army, and build a 30-60 galley fleet to park in the straits anytime someone declares war. You will probably end with dev costing the price ceiling, due to not really having anything else to spend MP on.

It is kind of funny winning wars and extracting 25 warscore of gold without actually bothering to build an army!
W

petertju said:
I remember an AAR once about a guy that did a WC as an OPM.

This is really aesthetic, the layers of border snakes. Very pretty.
Reactions:

Me_ said:
It's fascinating to see OPM world domination, but also rather absurd that it can be done at all. Continent spanning vassals should not respect an OPM overlord.
Click to expand...

I don't think it's that absurd. It's like a super decentralized country where about the only powers the federal level has, is the foreign diplomacy. Military/economy/... are handled by the states. In my country, Belgium, at least one party would prefer such a situation over the current one.

Also, I recently did do an Imperial City of Ulm run, and had quite some fun with it. The most important modifiers to stack are relation slots and vassal income (but not too much of this last one!). Just indebt your vassals, and pay their loans. Warning though, that gets tiresome after a while. For screenshots, see this related achievement proposal I made.
Toggle signature
Better tall play with a simple solution: new modifier suggestion
Reactions:

Well, out of curiosity (mostly to see how little conquering I could do without getting bored), I gave it a shot as a custom nation (with no allies the entire time to make up for the custom ideas). And while I didn't go the ENTIRE game without conquering, I DID stay an OPM via making client states the second I made peace with my enemies. And this is my result. 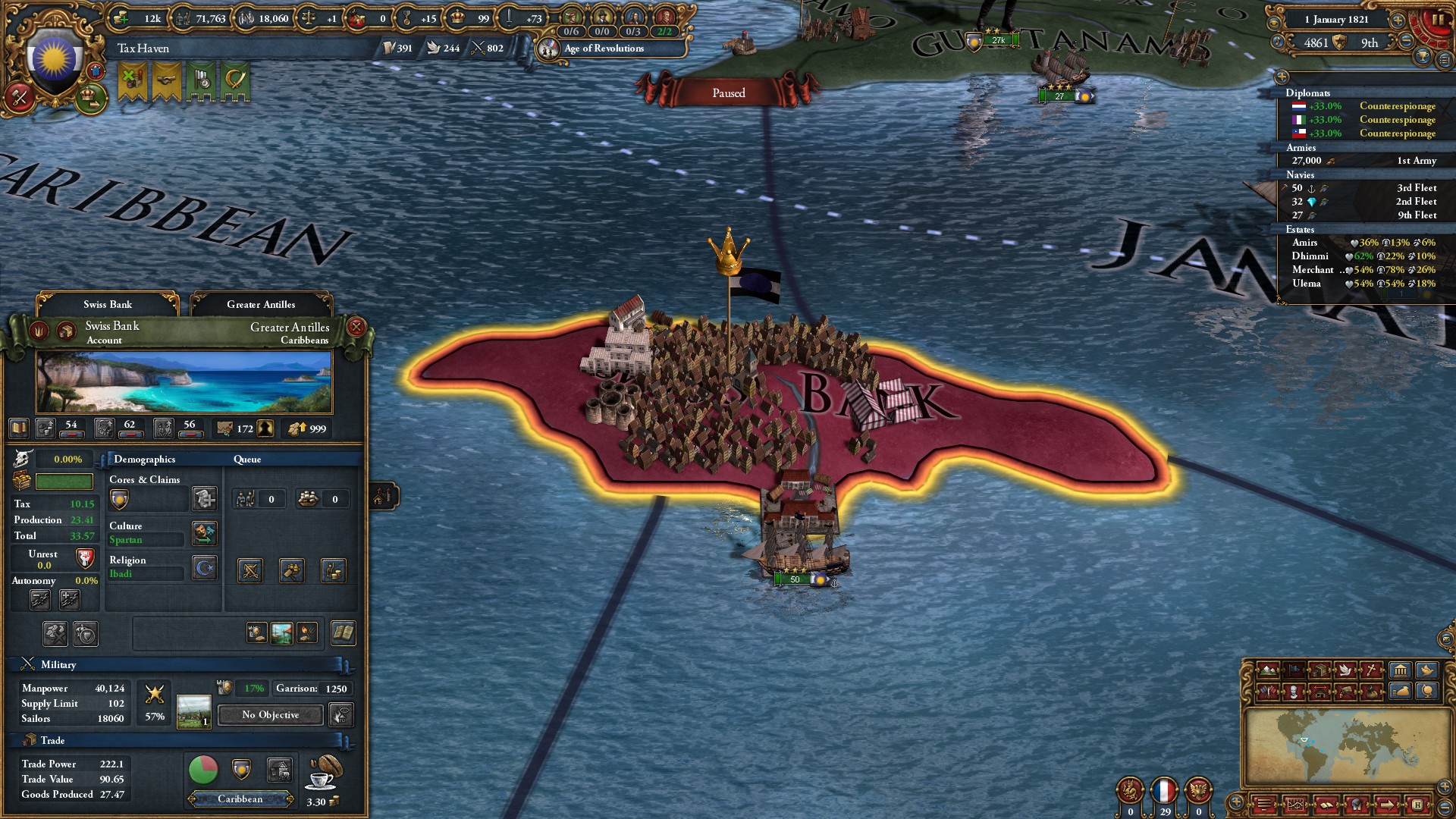 If Port Royal sank because of the buildings being too heavy, I don't think the island should exist at all in this case. 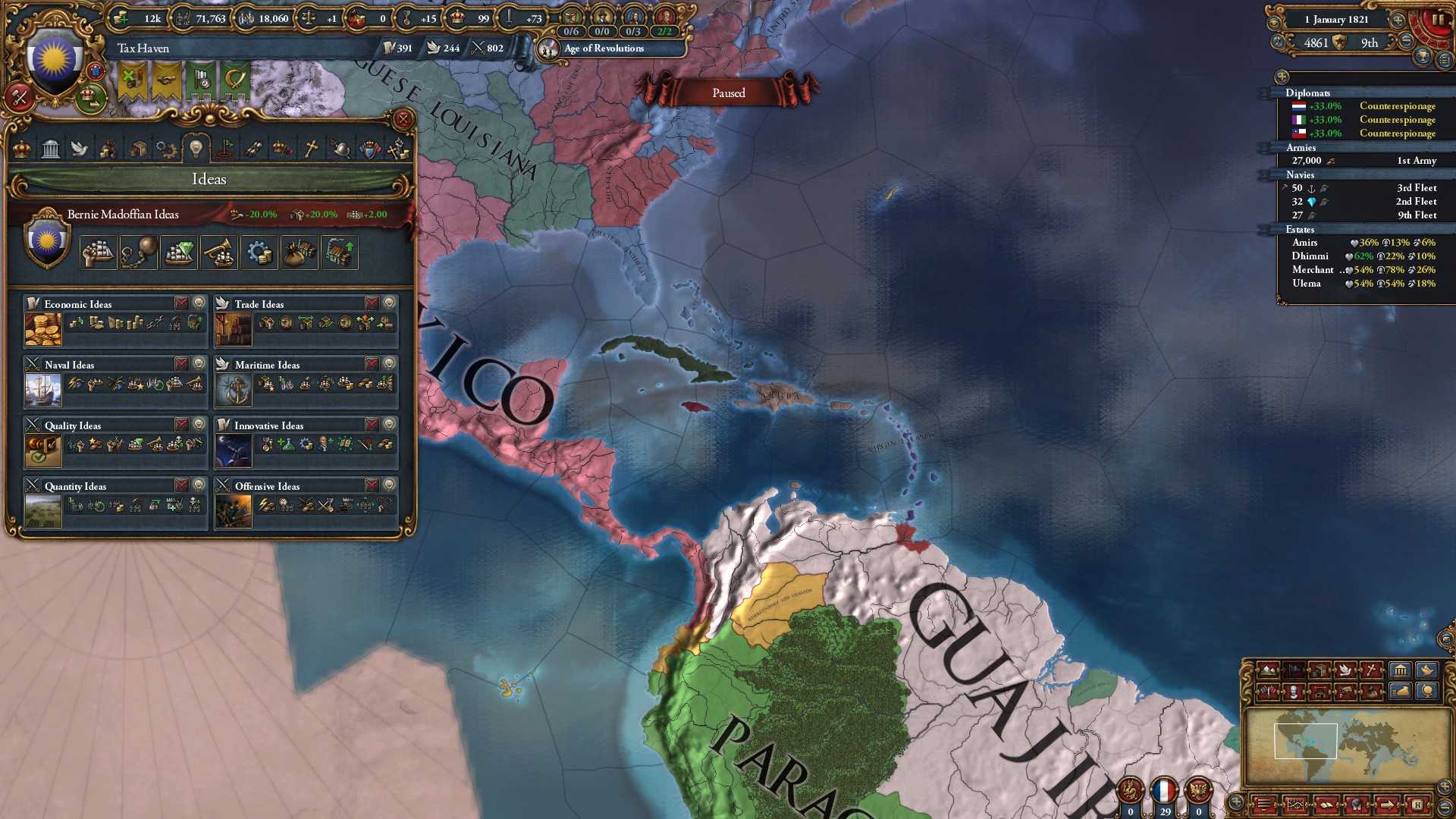 Ideas. All in all, the naval aspect was a bit too OP, but at the same time, I didn't really need them. Maritime + Naval alone would have left me as uncontested. 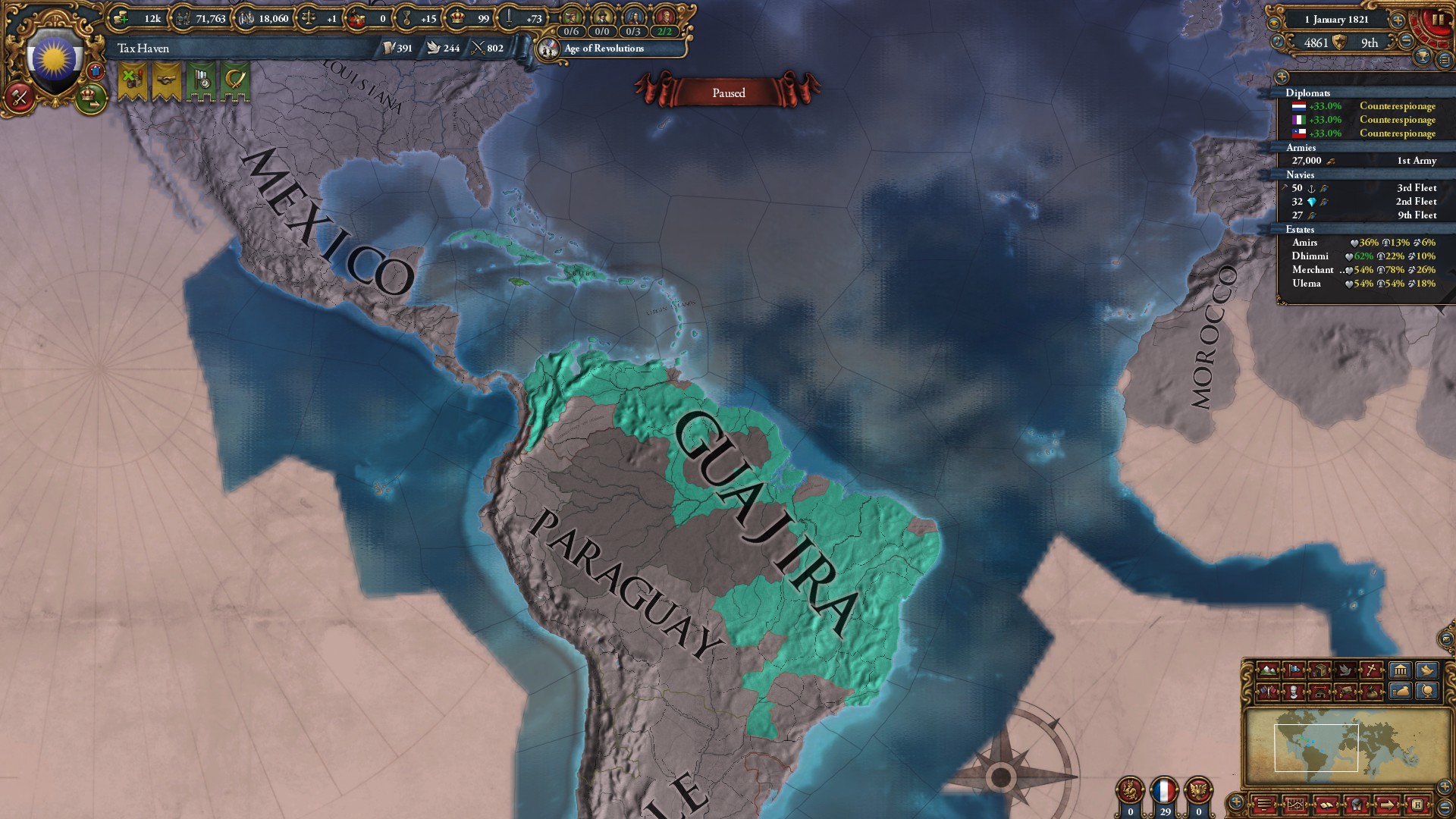 Subjects I gained. Any money they give me is almost instantly returned to them to pay off their debts and keep them loyal. 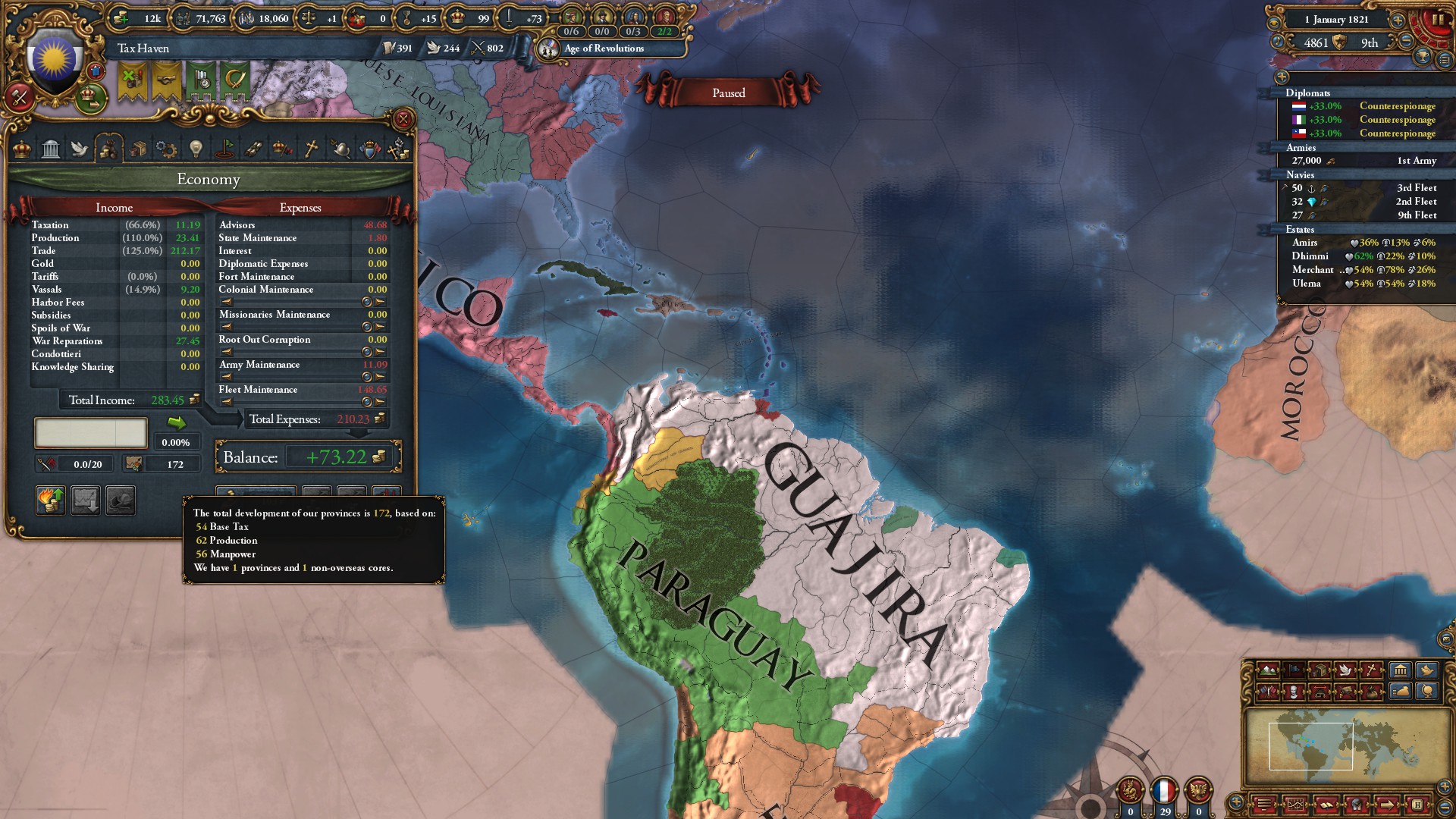 And the economy. With a navy like mine, extorting trade power and money from the surrounding nations was child's play.

All in all, I'd give my OPM only game a 3/10. I went navy only until the 1690s, then built one to siege down capitals. So the naval only aspect was interesting for the first war or two, but after that it was just meh. If I was on the mainland, I might have had a different experience, but I really didn't want to bother with AI allies. This was also an ally-less run, as previously mentioned. But the big killer was just the lack of anything to do. Watching your money go up loses its luster after the first century.
Toggle signature
I'm now doing AARs! Come read them if it strikes your fancy!

not actually in DI

Comrade Kalle said:
Don't know if it counts but I'm playing a game as Hamburg where I've stayed as an OPM with no allies, but I do have vassals. 14 of them in fact, which puts me way over my relation limit, but it works. It's pretty interesting since vassals give land force limit but the manpower doesn't change, so I have a force limit of like 120k but my max manpower is only 30k or something. I also decided to dismantle the HRE but I think it would've been better for me to stay as a free city. Anyway it's been an entertaining run, I basically have entire northern Germany plus half the Netherlands vassalized, all loyal, as a 63 development OPM.
Click to expand...

ig you just grab mercs in that case

Actually, this doesn’t work, as all your companies are super small. In my Ulm run, I had stacks with 6+ merc companies. It was a real nightmare to handle that.
Toggle signature
Better tall play with a simple solution: new modifier suggestion
Show hidden low quality content
You must log in or register to reply here.
Share:
Facebook Twitter Reddit Pinterest Tumblr WhatsApp Email Share Link
Top Bottom