Jump to latest Follow Reply
Menu
Install the app
You are using an out of date browser. It may not display this or other websites correctly.
You should upgrade or use an alternative browser.
Stellaris 46082 Bug Reports 26010 Suggestions 15622 Tech Support 2523 Multiplayer 355 User Mods 4365 Stellaris AAR (After Action Reports) Console edition 1094

I know the planet screen has been overhauled a few times, and has seen significant steps forward, as well as backwards. I am posting here, what i believe to be the shortcomings or potential areas for improvement in the way information is presented to the user. I of course don't know the code structure, so if some of these would be impossible to render, so be it.


LAND USE
The relationship between planet size, features, blockers, and available districts is not at all clearly illustrated. Simply showing the "features" as a row of tiles at the bottom of the planet screen would be an improvement. They are beautiful. The user can then mouseover the tiles to see what each offers, or click the blocker tile to queue its removal, without going into a submenu.

AVAILABLE DISTRICTS
I would suggest showing the 'industrial' districts (energy, minerals, food) as a group directly related to the feature tiles. This way its clear that the FEATURES unlock the DISTRICTS. Display city districts in a separate group, as they are independent of features, and merely fill up the remaining space.

JOBS, PRODUCTION
Clearly list the jobs and their occupation status on the main screen, so you dont have to mouseover to go hunt which jobs are filled or not filled. The production levels of the planets should be clearly linked to the jobs, so that its visual how they relate. Ideally, jobs should be grouped or color coded according to STRATUM, so that its clear which pops can do which jobs.

UNEMPLOYED POPS and LIVESTOCK
Show "livestock" pop separately and clearly on the main screen (grid amalgamated, domestic servitude, livestock, trophies, etc.). Do not confuse them with employed or unemployed pops. 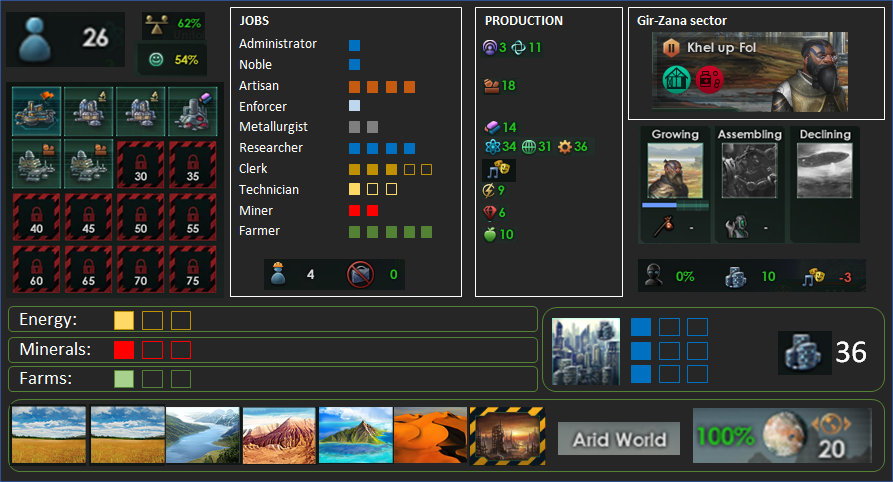 I've had negative job counts without domestic servitudes, slaves, assimilating pops, nor pops in any other "not working" condition. I've also seen positive job counts and when I've looked at the detail, all jobs are filled. I think the number is just bugged some of the time.
F

All of this is not a big deal. I would really like if stupid autosorting of buildings had switched off and if i could designate buildings in advance and thing like build robotocist in all 2nd building slots would be nice. You can learn how stuff works and where to look, but this goddamn clicking is the worst part.
Toggle signature
AAR #3. TCx5 challenge
General recommendation to all people who have ever uttered the words "i am sitting there doing nothing waiting the crisis" is to increase the difficulty in settings. If you are getting bored you obviously have more skill, than your current settings provide the challenge for.

Here is another variation of how the PLANET SCREEN could be redesigned to clarify the pertinent information. 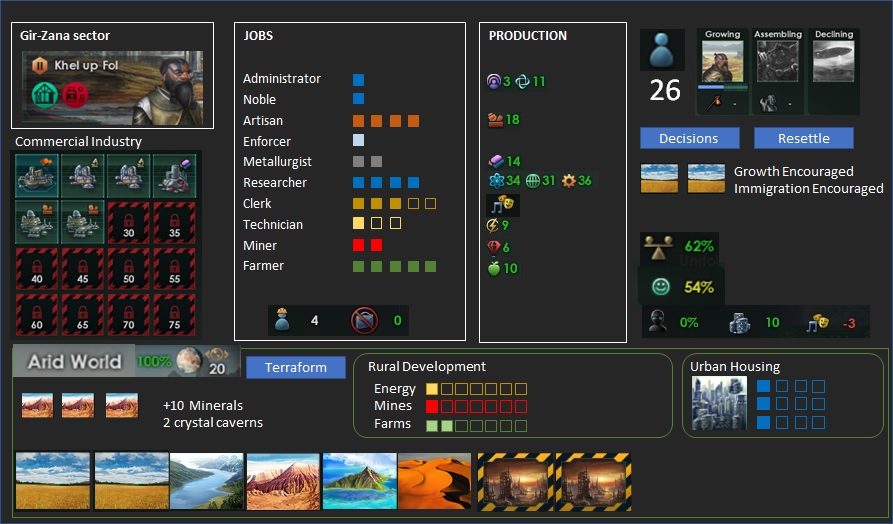 - no need for submenu to see features or blockers. They are always displayed.
- Planet bonuses also clearly displayed
- All population management data grouped together (total, stability, happiness, growing and declining pops, immigration, decisions, amenities)
- Jobs and Production are clearly related so AT A GLANCE you can tell which jobs are being worked, and which not, and what they are producing.

This significantly reduces the need for submenus, secondary tabs, mouseovers.