Jump to latest Follow Reply
Menu
Install the app
You are using an out of date browser. It may not display this or other websites correctly.
You should upgrade or use an alternative browser.
Hearts of Iron IV 38685 Bug Reports 10706 After Action Reports (AAR)
Show only dev responses

1. AI still, and more than ever before is juggling divisions on the frontline. In case of advancement made by player, it can redeploy whole armies on the front, simultaneously taking divisions from the frontline, and ordering other divisions from far away to take positions of the first ones (ofc, marching there, instead of at least str. redeploy them), which leads to leaving frontline wide open, and general chaos in the rear of the front with dozens of divisions just marching, and enemy taking frontline provinces without any ressistance, or attacking moving divisions, which have just lost their entrenchment bonuses. And it can happen a few times during one month which makes frontlines effectively useless. The only reason why to still use them, is planning bonus, and therefore in the case of Grand Battleplan it is just impossible not to use them (because of loosing 50-70% planning bonus), and simultaneously dumb to use them, because of constant loosing of entrenchment, gaps on the frontline ets. caused by battle AI juggling divisions.

2. Both of polish focuses for research slots are broken, not just "Warsaw University" one. In case of picking one, the second is locking and unable to take.

3.1. I see it also as a missfeature, but France is far too weak. On "historical mode" as Poland in the early 1940 I was able to have 42 mil factories, while France AI had 37. Historically it is just incredibly dumb, because France had both GDP and Armed Forces (both in context of raw numers of men ond mechaniqe equipment) far greater than Poland, and even than Germany (in case of number of artillery pieces, and tanks). Also, France AI always loses to Germans, even if Germans have to fight on both Western and Eastern fronts. And She always loses at best around february-april 1940. Sometimes even in late 1939. Once I had game (before NSB), where France was able to hold up till 1942 (I was playing Poland ofc, because in other case France falls just after Germany steamrolls Benelux), and the AI STILL DIDN'T PICK focuses to remove disjointed government (and in conclusion also to remove "victors of WW1) nor the one which gives I think 6 or 8 civ (or mil?) factories (heroes of the production or sth like that). Both of these two were just available to take, and the AI haven't done it till downfall. Also the case of "French backward military doctrine" is absolutely disputable, because in reality in 1940 on the tactical lvl they weren't just steamrolled like it is in HoI4. On the tactical lvl they were able to fight toe to toe with Germans (via Battle of Gembloux Gap for example). They had different doctrine from the german one, but it wasn't backward at all. In 1940, they were outmanouverd on the operational level, and paralysed by luftwaffe air superiority (not supremacy also vorthy of mention) and that was the main reason why they have lost, and not some strange german steamroll machine which has punched straight through the French lines (like it is in HoI4). Also, they haven't capitulated till virtually whole of the Northern France was in German hands, and main part of their army was dystroyed.

4.1. UK wants to get rid of Sikorski, so we will pick Sikorski as our leader. Sikorski has become the leader (Commander-in-chief) of Poland in exile only because of the intervention of the French ambassador in Romania, who both with German one were insisting on Romanians not to let Polish government to sefely pass through Romanian soil, and instead of, to intern them. Therefore Mościcki has designated Wieniawa-Długoszowski as his succesor as President of II Polish Republic, and Wieniawa was the one, who was opposed by allies, and not Sikorski! (and in aftermatch of these events, Raczkiewicz has become president, since the French weren't opposing him, and Sikorski has become C-i-C, replacing in this place Śmigły-Rydz)

4.2. Raczkiewicz was not a member of democratic oposition, he was a member of firstly: Sanacja, and secondly: pre-war "the Castle" Mościcki's clique, moreover he was even Voivode under the Sanation regime, and Marchall of the Senate from BBWR. It is just unhistorical, to make him some strange kind of democrat. Even after war, he appointed former member of Sanation as his succesor on the position of the President of II Polish Republic in exile. 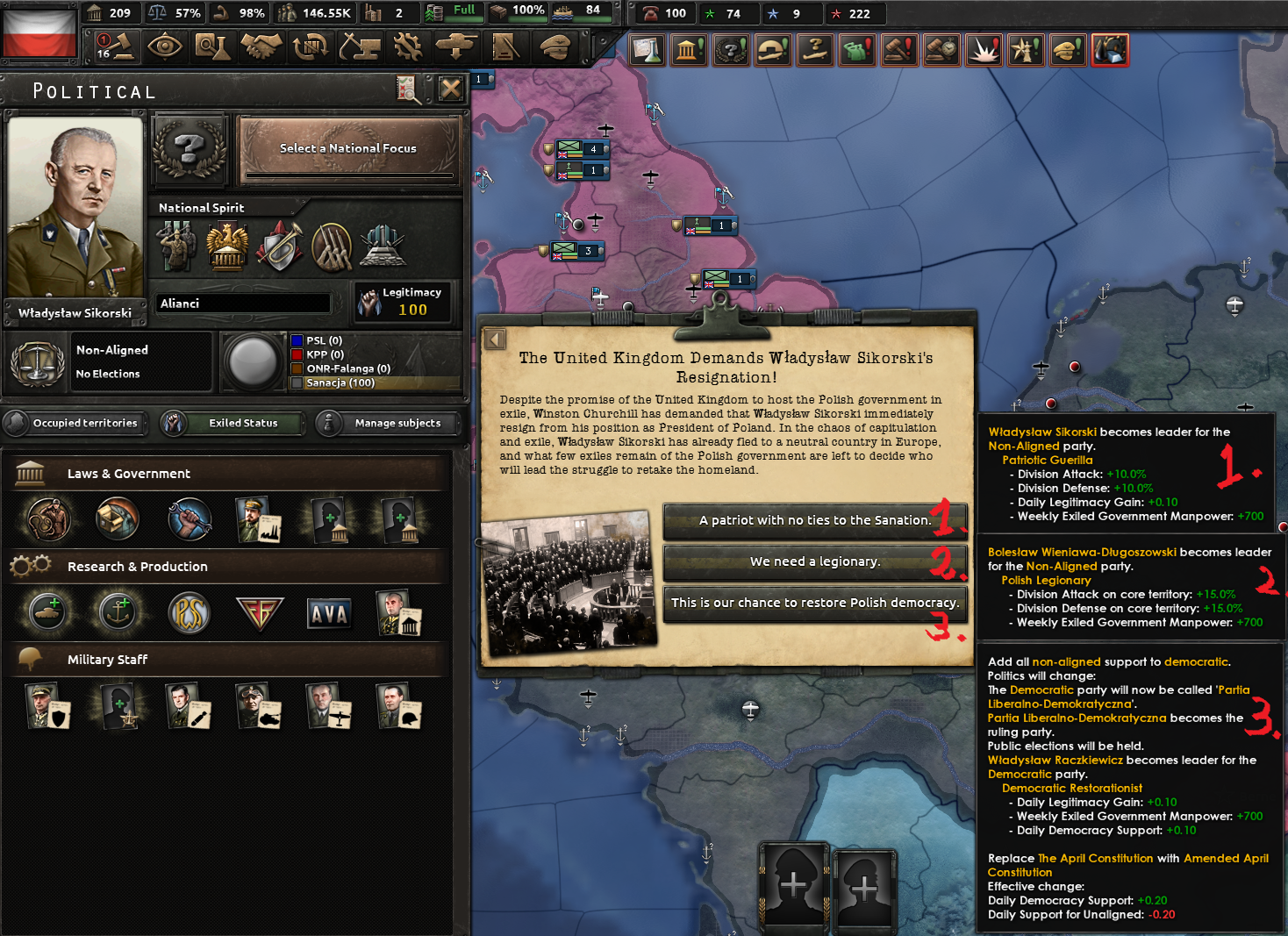 I don't know, if you can make anything about that, but it just looks at best poorly. 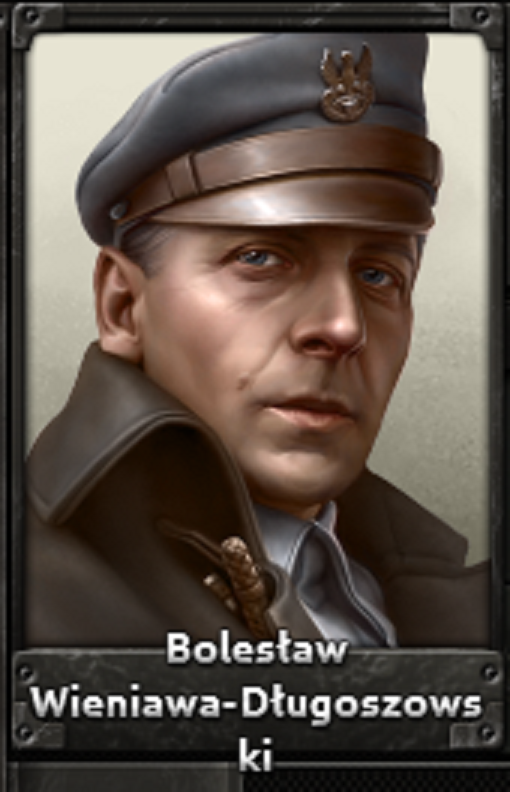 I seemingly can't select the tank filter icon. Don't know whether i missed something or if it's a bug. 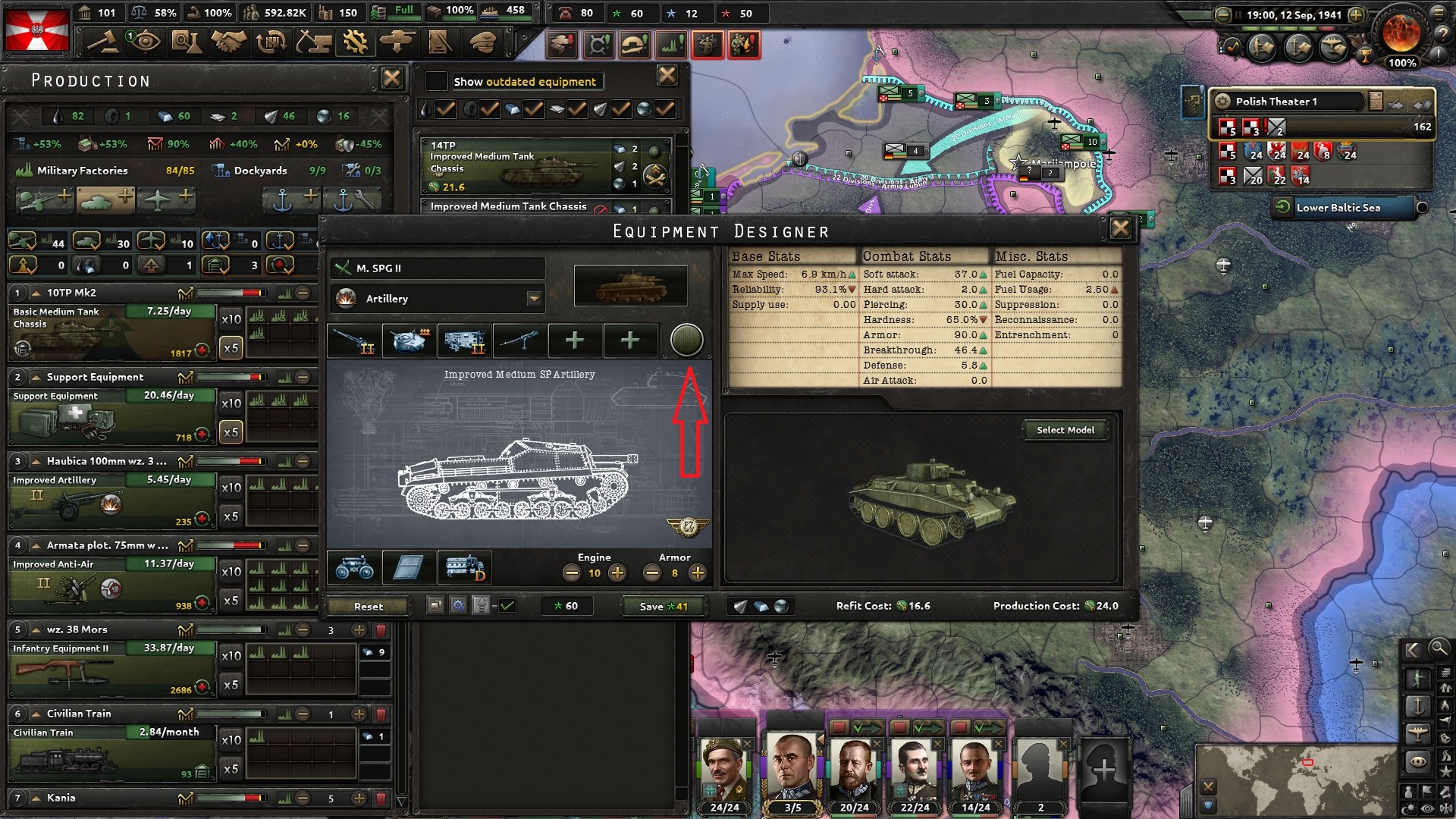 The language in the game is incomprehensible, what should I do?

So I have had 3 playthroughs, one as Estonia, one as Latvia, the other as Korea. In all three games as soon as we hit around 1946 the game did not run at 5 speed it would just start moving at 1 speed. I know that as the game progresses due to the number of divisions it slows down, but I was at 5 speed for an entire minute and moved about 3 hours. I thought it was an issue with my PC, I forwarded my save file to my friend and same thing. He also mentioned he encountered the same issue.

Also in those three games Japan has gotten stomped. By the time Japan strikes south and attacks the Philippines they are months from being knocked out by the US. I don't think Japan has survived pass the summer of 1942 in my games as the US naval invades them quickly and capitulates them
J

Playing Italy, I declared on Austria early in the game, they got guaranteed by UK so I had to deal with them as well. Occupied Austria pretty fast, but while dealing with the UK in Africa, Hungary stole Austria off of me using their focus tree, where Austria votes to unite with Hungary. Surely this should not be happening?
Reactions:

Can the Suwalki triangle be added as a state in Poland? It was given to Germany under the Molotov-Ribbentrop terms.

Midway through Barbarossa, as Germany I created Reichskommissariat "Ostland". Seconds after forming, the territory turned Soviet and I had to reconquer it leading to a reproduceable CTD.
Toggle signature
"One of the most damaging lies of our era is the falsehood that people must give up freedom to enjoy economic progress, which makes me think of a story - everything makes me think of a story - about three dogs: an American dog, and a Polish dog and a Russian dog.

Can the Suwalki triangle be added as a state in Poland? It was given to Germany under the Molotov-Ribbentrop terms.
Click to expand...

I'm afraid I'm not the right person to ask. I'm usually better at answering questions about C++ programming, wine and France (in no particular order).
You may want to offer a suggestion to our game designers instead of me
Toggle signature
Mathieu Ropert, aka The French Paradox -- @MatRopert -- Twitch thefrenchparadox
Tech Lead of Hearts of Iron 4 (past projects: Stellaris, EU4, Imperator)
Reactions:
N

Is it just me, or can you still not select models like the Maus and King Tiger in the tank designer?
Reactions:
P

nerdcubednerd said:
Is it just me, or can you still not select models like the Maus and King Tiger in the tank designer?
Click to expand...

nah it's not just you, the panther, tiger ii, and the maus are also missing for me. the hotfix did allow me to pick several tank destroyers, and spaa but it still has not completely fixed the missing models
Reactions:
G

Something is wrong with Soviet national focuses. I don't have new DLC which makes impossible for me to get tank research boost focus. It says I have to research medium tank chassis first, when I don't have tank designer, it's ridiculous and doesn't make sense.

Germany loses access to most of its focus tree if it goes democratic and the 2nd Russian Civil War breaks out between Reds and Whites.
Toggle signature
Praise the Lord, and Pass the Ammunition!

Need help! I found a VERY disturbing issue that during naval invasion divisions loose fuel while being at sea even the amphibious ones! It makes them utterly useless since you need a lot of time to invasion to get any stats and while its going u loose fuel and all the stats. It shoudlnt work that way!
And the second issue. Floating harbours in my pure vanilla test work extremely poorly. Look at that pathetic work. And they also dont supply fuel. Like come on, they should.

Dear developers,
There is a saying: whatever you do, do it right or don't do it at all. This saying applies perfectly to the changes introduced with the last DLC for Poland.

Old bugs have not been corrected, and a lot of new ones have been added ... moreover, we also got humorous and fantasy elements.

I have noticed one significant progress. Eugeniusz Kwiatkowski ceased to be the "prince of terror". But we still have an advisor, Tomisław Łupaszka, who has been the subject of mockery on the Internet for years, and General Józef Haller is still a war industrialist! Who came up with it?

The Polish translation is tragic. It is not Polish, but paradox-polish. In some focuses, it is completely unknown what their purpose is. I had to guess their sense from the focus effects and the English version.

Below are some notes about the available generals:

It is a pity that you did not have the will and time to check such simple and easily accessible information on the Internet, and on the other hand, you had time to come up with such nonsense as Paweł Bermondt Avalov as the Cossack king of Poland.

There are really no words to comment on this.

And one more detail: the icon of The Sanation Left ... and on it: Haller (!!!) with Sławek and Żeligowski. Which genius came up with this?

EDIT>
- Katowice is Upper Silesia, not Lower Silesia.
- Poland still has no choice whether to take Zaolzie or not.
Last edited: Nov 26, 2021
Reactions:

This is WAD. The 4th research slot does not have the requirement, the 5th one does. France works the same.

gavriljev.kolya said:
Something is wrong with Soviet national focuses. I don't have new DLC which makes impossible for me to get tank research boost focus. It says I have to research medium tank chassis first, when I don't have tank designer, it's ridiculous and doesn't make sense.
Click to expand...

This has been fixed in an internal build, thanks for pointing it out!
Reactions:

Archangel85 said:
This is WAD. The 4th research slot does not have the requirement, the 5th one does. France works the same.
Click to expand...