Paradox Announces When The Reaper’s Due in Crusader Kings II

Jump to latest Follow Reply
Menu
Install the app
You are using an out of date browser. It may not display this or other websites correctly.
You should upgrade or use an alternative browser.
Crusader Kings II 69583 Bug Reports 19689 User Modifications 10510 Suggestions 5909 Tech Support 6334 After Action Reports
Show only dev responses 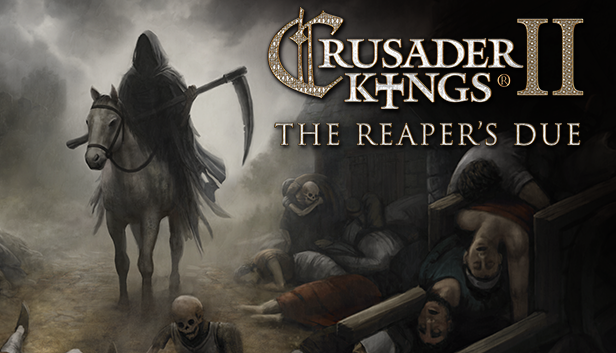 Deadly New Expansion to Launch on August 25 with New Patch

Paradox Interactive, a publisher and developer whose games have serious reaper-cussions, today announced the release date for The Reaper’s Due, the upcoming expansion for the medieval grand strategy game Crusader Kings II. Featuring new disease and medicine mechanics and a whole host of deadly new challenges for players’ in-game nobles, The Reaper’s Due will be available on Windows, Mac, and Linux PCs on August 25, 2016.

This expansion will return the Black Death to its rightful place in the center of medieval history, and add new systems that reward sound realm management and planning.

But, as with all expansions from Paradox, The Reaper’s Due will launch with a new content patch for Crusader Kings II, updating the game for all players, whether they purchase The Reaper’s Due or not.

Great news and nice changes! Is it going to have a content pack as well? Sorry, can't remember if you've already answered that question.
Thank you for the great work! Can't wait!

King of the North

TheLetterZ said:
New custom rules options at start up for epidemics, invasions, legal changes and so on, so you get the Middle Ages that you want.
Click to expand...

So, is there an option to force Absolute Cognatic for everyone (gender inequality must not exist, even in historical settings) and remove concubinage (because it promotes rape culture and denigrates women).

I feel that only this way we can truly realize our dream of a Social Justice -friendly CK2.

P.S. These were all jokes in case you didn't get it. They are based on actual threads by actual forumites, but I will not link to them as I don't want to spread their madness.
Toggle signature
Son, let me tell you how the world works.

Is this last big dlc for the game or is there more??

CrazyWolf66 said:
Is this last big dlc for the game or is there more??
Click to expand...

There are going to be 2 more
Reactions:

That pun though...
Toggle signature
So close, no matter how far
Couldn't be much more from the heart
Forever trusting who we are
And nothing else, except Victoria III matters
Reactions:

I'm excited, I will have to make sure to save some time to play CK2 when it's released.

Do we get a new music and aesthetics pack?
Reactions:

So can we say... crank epidemics way up and have a medieval world where living long enough to die of natural causes is unusual? Or turn it way down so that the worst epidemics you get are that your cat has more kittens than you were expecting? I guess I'm just asking what sort of range we'll have with those adjustable options.
Toggle signature
Only the Man who knows himself a fool is wise.

Is the autosave intervals option available for Ironman games too? It's the one thing keeping me from enjoying the game after a few hundred years. Even with an SSD it takes way too long to save every time, but I think less frequent saves would make it bearable.
Toggle signature
██████████

Is this more than a "has_dlc" condition? Or did I misunderstand something? Hopefully there will be a dev diary on modding additions.
Toggle signature
User Mod Index: the CK2 User Modification Index for mods, utilities and guides. Post in it to add your new mods or updates.
When the World Stopped Making Sense: developer for this CK2 dynamic & historical Migrational Era mod 476-600 (+) mod created by Enlil - 0.9.13!
Emendatio Historiae Imperatoris: developer for this Imperator: Rome historical and flavour mod.

I am excited for this expansion
just a bit sad that it comes out the first day of classes for me though
Eh well gives me something to look forward too on that day
although will have to wait for HIP To update to be compatible with the expansion anyway.

First page? And awesome!
Toggle signature
Someone remind me to do an AAR of me playing as celts and such in the English Isles for CK2 where I fight the invading cultures! Or however that went historically

Will I be able to play this game again after all this time?!
Toggle signature
Any society that would give up a little liberty to gain a little security will deserve neither and lose both. -Benjamin Franklin​
Reactions:

Definitely looking forward to this one. Will probably buy on release if it's $10 or less.
Toggle signature
GENERATION 39: The first time you see this, copy it into your sig on any forum and add 1 to the generation. Social experiment.

Paradox Grand Strategy: the genre that let you unleash your inner sociopathic egomaniac.

What do you mean, why can't I declare war on my brother? Yes, I know that I have a close relative in his court, but he's my nephew, AKA my brother's son. He wouldn't kill his own son just to punish me for declaring war on him. Probably.

ranichi17 said:
Do we get a new music and aesthetics pack?
Click to expand...

pcavalcanti said:
Great news and nice changes! Is it going to have a content pack as well? Sorry, can't remember if you've already answered that question.
Thank you for the great work! Can't wait!
Click to expand...

It would be nice if we got ANY response for these questions.
Fat chance it seems...
Toggle signature
Check out Via Sancta, my mod that adds pilgrim routes to the game.
Check out Simple Top Left Main Tab - UI MOD, my mod that....you can figure out what it does from the title. xD
-----------------------------
Lieutenant George: Oh, sir, if we should happen to tread on a mine, what do we do?
Captain Blackadder: Well, normal procedure, Lieutenant, is to jump up 200 feet into the air and scatter yourself over a wide area.
-----------------------------
"Games are like sausages, beware of seeing them made." - DDRJake
Reactions:
Show hidden low quality content
You must log in or register to reply here.
Share:
Facebook Twitter Reddit Tumblr WhatsApp Share Link
Top Bottom