Menu
Install the app
You are using an out of date browser. It may not display this or other websites correctly.
You should upgrade or use an alternative browser.
Stellaris 43546 Bug Reports 23493 Suggestions 13549 Tech Support 2236 Multiplayer 337 User Mods 4178 Stellaris AAR (After Action Reports) Console edition 978 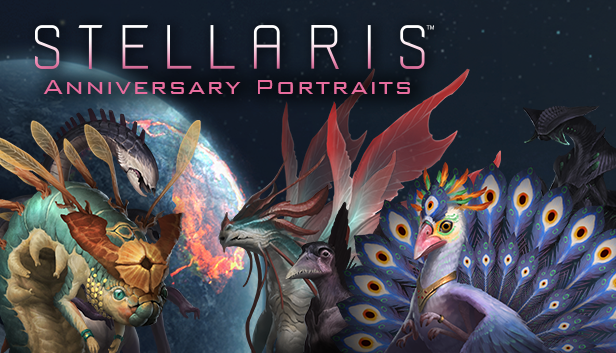 Happy Birthday to Stellaris – But the Gift is for You

STOCKHOLM – May 9, 2017 - Your species has mastered the seemingly impossible. Faster than light travel means a new era for your civilization. Brave pioneers set forth from our ancient homeworld into the unknown, while scientists unlock more and more of the vast mysteries of the cosmos.. But you are neither the first, nor the only, species to climb to the heavens. You must test your military and diplomatic prowess against rival galactic empires.

It’s hard to believe that Stellaris is already a year old. Paradox Development Studio’s science fiction empire builder arrived in 2016 to widespread critical acclaim and found an eager audience ready to transcend the bonds of their home planet and forge a bright (or dystopian) future. To celebrate this anniversary, and as a gesture of thanks to the inhabitants of Earth, Paradox is offering a Stellaris bundle with its expansions for USD 69.99.

The Stellaris Digital Anniversary Edition includes:
Paradox is also giving away the pre-order pack Creatures of the Void and a new Anniversary Species Portrait Pack to all Stellaris owners as a thank you for their support over the last year. Over the week of the anniversary, Paradox will also be offering discounts on the purchase of the base game and the first two major pieces of DLC.
Paradox Development Studio is very happy that so many of you have chosen to take this interstellar journey with us. Over the coming years you can expect exciting new realms of possibility and adventures among the endless stars in Stellaris.

New free species portraits? Thank you, those are always most welcome.

Do those with creatures of the void automatically get the new species portraits?

I'm fully aware that this is a barely concealed attempt of bribing us with pretty pictures to forget about the controversy regarding 1.5, Hiveminds and... uhm.. the other stuff I forgot.

Still appreciating the nice gesture though. Now I got a good potrait for my Spiritual Purifier run :3
Toggle signature
Greetz, Alblaka

Anniversary portraits is in my library but won't install. Not appearing in the launcher which opens after trying to download the dlc from the store page.

My favourite Paradox game so far, and I say this as somebody who got around 2000 hours of EU3, EU4, Victoria II and CK2 combined. Stellaris was a pleasant surprise, I honesty don't know how you got so many things right from the start considering how different it is compared to other Paradox titles, especially when it comes to graphics (I can still not believe that Stellaris is in made in the Clausewitz engine). It does have long list of issues that needs to be sorted out, but I'm happy that there is a game that can fill the space 4X void we've been suffering from for so long, and the recent updates prove that you are on the right way.
Toggle signature
Nu breder värmen ut sina vida vingar
Över blockmarker mot nordlig pol
Se! Hur förorenigars verk nådlöst svingar
Sin domedagshammare, under en ihärdig sol

I'm a little annoyed that the bonuses that I had to preorder to get are being handed out for free like a bribe.

It makes me feel even more like the ridiculously large number of images under my username are like those badges that dictators give themselves.


Dagda said:
Anniversary portraits is in my library but won't install. Not appearing in the launcher which opens after trying to download the dlc from the store page.
Click to expand...

I got same issue, but solved that.

Darrenb209 said:
I'm a little annoyed that the bonuses that I had to preorder to get are being handed out for free like a bribe.

It makes me feel even more like the ridiculously large number of images under my username are like those badges that dictators give themselves.
Click to expand...

I got told quite brutally to "shut up and stop being elitist" when I mentioned being annoyed about the publicity participation reward being given out to everyone.

I'm interested to see whether the people that were saying that will join in your outrage.
Toggle signature
*This space deliberately left blank*

Its sad that the pre-order exclusive portraits are given away for all
they were they only reason why i didnt bought the "normal" edition.
tbh i feel a little bit scammed...

I just have to say that the anniversary portraits are amazing. Thank you so much for your hard work Paradox. I would honestly have paid for the portraits, despite the big uproar over the Plantoid Portrait Pack price. Please Paradox, do not let this discourage you. Continue making portraits and I will pay whatever you charge.

Thank you paradox
Toggle signature
What A Time to be Alive

Lord of the PC master race

I'm a bit disappointed that one of my pre-order rewards is now being given away for free. I honestly would have held off pre-ordering had I known this would happen.

How petty do you have to be to complain about others getting something when it in affects you in no way whatsoever. If it makes you feel better, consider you had exclusivity on the portraits for a whole year.