YOU'RE ALL IN BIG, BIG TROUBLE NOW! ​
Toggle signature
I don't know how you get away with it sometimes. -Aedan
Attack is the best offense, after all. -Wagonlitz
Darn it EUROO7. -Captain Grimlock
Euro is sus -Marshall Marshmallow

The year is 302. It has been already a year since you first arrived at Usanfikod (Murderglazes).
The life has been good so far. There are 17 of us. Everyone has a place to sleep. There is enough turtle and dwarvish alcohol.
What more does a dwarf want?

​
House in the middle of nowhere:

Late at night, when all are asleep in this humble residence, a knock is heard on the old wooden door. The man of the family, unfamiliar to this sound exits his slumber, and at the pleas of his wife, goes to see who it is that would come and disturb this home. As he asks politely from behind the door who it is, a deep voice rumbles from the other side. Just a lonesome traveler, looking for a place to rest for the night...
Toggle signature
I don't know how you get away with it sometimes. -Aedan
Attack is the best offense, after all. -Wagonlitz
Darn it EUROO7. -Captain Grimlock
Euro is sus -Marshall Marshmallow


The year is 2009. A sharp economic recession and a financial crisis are wreaking havoc upon Great Britain. The Labour Party has been in power since 1997 and Gordon Brown has been Prime Minister since 2007. On top of all the economic problems, numerous scandals have erupted, many important cabinet ministers are resigning, and Labour is losing ground all over the country and in the European Parliament.

This morning, we have received reports that the Labour Party has been infiltrated by the Conservatives. We must root them out before they bring the Government down. The Prime Minister, Gordon Brown, knows his party and can determine the identity of a given MP. On the other hand, David Cameron, the leader of the Conservatives, has grown more powerful recently and can block the Prime Minister's attempts. An election must be called by June 2010, when Labour will most likely be mercilessly crushed. The question is: can Labour survive until then?

Check it out HERE

Operation Valkyrie (Unternehmen Walküre) was an emergency continuity of government operations plan developed for the Territorial Reserve Army of Germany (Wehrmacht Heer) to execute and implement should, for whatever reason, there come to be a general breakdown in civil order of the nation; caused by the failure of the nominal civilian (Nazi) led government, to maintain control of civil affairs. The plan was approved by German dictator Adolf Hitler, who intended it to be used in the event that physical disruption caused by the Allied bombing of German cities resulted in a breakdown in domestic law and order; or a rising by the millions of forced laborers from occupied countries working in German factories.

German Army (Wehrmacht Heer) officers General Friedrich Olbricht and Colonel Henning von Tresckow modified the plan with the intention of using it to take control of German cities, disarm the SS, and arrest the Nazi leadership once Hitler had been assassinated in the July 20 Plot. Hitler's death (as opposed to his arrest) was required to free German soldiers from their oath of loyalty to him (Reichswehreid). After lengthy preparation, the plot was carried out in 1944.​
Check this game out at: http://www.europa-universalis.com/forum/showthread.php?t=411203
Toggle signature
A witty saying proves nothing - Voltaire.

You can now go play HOI3 at http://forum.paradoxplaza.com/forum/showthread.php?p=9794638#post9794638
Toggle signature
Founder of the Lord Strange School of Thought

THE SETTING​
One warm spring morning, you wake up to the sun shining in the window, birds chirping, and a gentle breeze ruffling the curtains. After a quick shower and some cereal, you go to check the mail. To your surprise, you find a letter from Princess Peach! She is inviting you to her castle for some cake! You hurry to your go-kart and work your way to the castle as fast as possible.

When you arrive, you find out you weren't the only one invited. There are all the familiar faces. Mario and his brothers have made it, they brought along Yoshi so they could walk around quicker, there are a few toadstools and koopas trotting around, and even Princess Daisy showed up.

As you walk across the moat's bridge, you start to get an ominous feeling in the pit of your stomach. That feeling only grows when you open the door and a mysterious laugh comes from a disembodied voice. You look around, and the castle seems deserted. There are no servants running around doing servant type stuff, no cooks, no dog-walkers, nothing. The only people there are the members of you little party who arrived for cake.

You walk around the lobby to try to find any clues about what is going on, but there is only one unlocked door. You open it up, and look upon a single, giant, shimmering picture.............​
[thread=412573]Linky![/thread]
Toggle signature
OrangeYoshi

​
Toggle signature
I don't know how you get away with it sometimes. -Aedan
Attack is the best offense, after all. -Wagonlitz
Darn it EUROO7. -Captain Grimlock
Euro is sus -Marshall Marshmallow 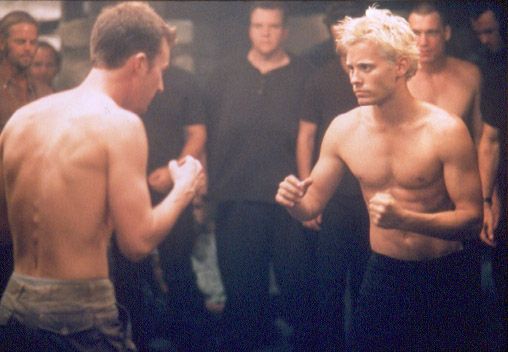 To the outside world all of you are normal people - living normal lives and practicing normal hobbies - that simply have the odd bad luck of getting a surprisingly large amount of bruises and black eyes. In the insider world of Fight Club however, you reveal the hidden nature that is shared by all other members. Rough. Violent. Not afraid of dying.

Over the past few weeks there has been a suspicion that Fight Club has been infiltrated by a group, wanting to shut it down. However you will do everything to prevent such a thing from happening. This is your life, and it's ending one minute at a time.

Toggle signature
"Listen up, maggots. You are not special. You are not a beautiful or unique snowflake. You are the same decaying organic matter as everything else. We are all part of the same compost heap. We are the all singing, all dancing, crap of the world."
‽
"The path of the righteous man is beset on all sides by the iniquities of the selfish and the tyranny of evil men. Blessed is he who in the name of charity and goodwill shepherds the weak through the valley of darkness, for he is truly his brother's keeper and the finder of lost children. And I will strike down upon thee with great vengeance and furious anger those who attempt to poison and destroy my brothers. And you will know my name is the Lord when I lay my vengeance upon thee."​

You are part of a hunting group currently located in the back hills of Tennessee. The day after you got there, a tree fell on your bus, your only transportation. Instead of searching for help, you decide to try and make a utopia starting with only your group of 17 people.

But! There are 4 people who have become disenchanted with your so called "utopia". They are trying everything they can think of to bring the loyal hunters down. The loyal ones must rally around the hunting guide if they want to survive the new psycopaths among them.[/thread]
Toggle signature
OrangeYoshi

Setting:​
It's September 20th, 2006. You're the citizens - some new, some longtime - of a small rural town of Jericho, Kansas. Little you know that soon you will become part of extraordinary events.

​
The catacombs below Paris are abandoned, and no man has walked along its skull covered hallways for centuries. Thats at least what most people think. Another thing that most people think is that the western world, is governed by governments elected by its people. Only crackpots, loonies and other crazies believe otherwise. In this case however, they are absolutely right. The world is governed by 14 people, who meet once every three months in the catacombs below Paris to discuss the future of the world. These people are the upper reaches of the Freemasons. A secret society that controls the world from the shadows, without people even realising that they live in total tyranny. You are one of its members, and you have come to this meeting. You know not the true identities of the others, only nicknames that are obviously not real names. They could be anyone! Perhaps a well known celebrity, a high-profile politician or perhaps even someone utterly unknown!?

You have entered the chambers where deliberations will happen and the door has been shut. Noone can enter and noone can leave for 7 days.

Could anything possibly go wrong?​
Toggle signature
Does Might Make Right? No.
Does Right Need Might? Yes.

You are the young elite of New York City. Born into money, you are all spoiled bored teenagers. You attend either Constance Billard School for Girls or St. Jude's School for Boys. You live in a world full of money, manipulation, drugs and sex.

Enter the world of Gossip Wolf! You and your faction are living in a small third world country. After years of planning, you and your commerades have led your people into a glorious revolution overthrowing the previous 'tyrant' in power (read: you staged a coup). You have now promised your people wealth, prosperity and to put an end to corruption.

Werewolf LXXIV: The Quest for the Holy Grail​

The Setting
Somewhere in England.....

You are a band of knights in England. You have taken upon yourselves the most honorable and Holy Quest: That of seeking the Holy Grail. God himself has given you this quest, and you will do absolutely anything to accomplish it. But there is a problem. Group(s) of men (or maybe women, i don't judge) have worked their way into your group. Their goal is to prevent you from finding the Holy Grail. Or maybe they will keep it for themselves instead........

You must stop these evildoers, before they take the Grail. God will show no mercy unto us if we let it fall into the wrong hands. We have all known each other for a long time, so it will be difficult to discover who is on the Holy path and who is not. There may be some among us who can help us solve this mystery, but there will also be numerous evildoers who will do the same to try and stop us. We must be vigilant, and with God's Holy help, we will prevail.

Welcome to the Quest for the Holy Grail!​

Werewolf Lite CXLIV: I Can Has Werewolf?

The Setting
You are lolcats. You win teh internets and eat many cheeseburgers. But lately some of you have been disappearing at night. It seems your mortal enemy the loldogs have infiltrated your group and are killin your dudes off one by one. They must be stopped!
Toggle signature
On such a bright day who needs underwear or socks?
Show hidden low quality content
You must log in or register to reply here.
Share:
Facebook Twitter Reddit Tumblr WhatsApp Share Link
Top Bottom