Jump to latest Follow Reply
Menu
Install the app
You are using an out of date browser. It may not display this or other websites correctly.
You should upgrade or use an alternative browser.
Europa Universalis IV 76592 EUIV: Suggestions 16472 EUIV: Technical Support 5851 EUIV: FAQ & Strategy Guides 197 EUIV: AAR's, Let's Plays, and Fan Fiction EU IV: Alternate History Short Story Contest Contr 26

As the title says, the suggestion is to implement a trade and production system inspired a lot by the mechanics of Imperator: Rome.

INTRODUCTION
When I started reading the I:R DD about trade, the first thing that came to mind was the EU4 system of trade routes and goods produced, but as I read on, I saw that they seemed to have quite the breakthrough with their mechanic.
But that doesn't mean that EU4's trade system is to be thrown away and replaced by it, no, no.
"trade route" has a very different meaning for I:R and EU4. While in the first you set it up manually, and is in full control of what happens on trade, the latter has a much more complex system with static nodes and flow.
To me, they feel like a perfect complement for each other, that complexity put together with I:R trade goods system has the potential to make something truly special.
The problem with EU4's goods is that they feel a bit too inertial. Sure, they give provincial bonuses that are (mostly) quite useful, so it's not like they are truly inconsequential, but when compared to I:R's system, where you'll have an immediate strategic interest in everything that's going in and out of your country, it does feel underwhelming.
Now, I don't know if there's a policy against using mechanics similar to ones from another PDX game (I hope not), but here goes a shot anyway.

SUGGESTION
For starters, the first thing I'd like to take from I:R, goods giving a bonus to a state, not a province (I know, in concept, I:R's province = EU4's state), and the capital state giving a nation-wide bonus.
But in EU4, production is not in discrete units like in I:R, so to nail this, a state only gets that bonus if 1 good is produced.
From 2 onwards, there's the "surplus bonus", a weaker bonus, but still powerful when stacked.
Below, a suggestion on how that interface could look like (I'm sorry in advance). 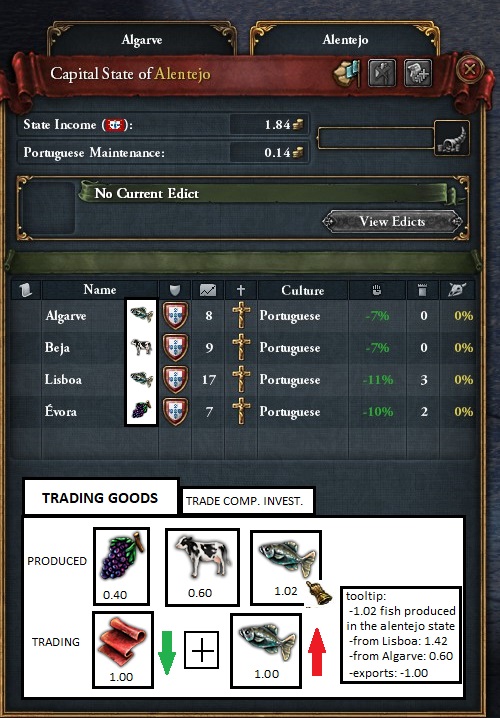 So, there's the new column in the province list for goods, as now I think this is a very important info (I only put it by the name column because it was the place with most space, but in my head it can go anywhere really).
Now for the main box: there's two tabs, one for the trade company investments mechanic for players who own Dharma in states with TCs, and the new trading goods tab.
It lists the goods produced by the state and how much of them that state produces.
In the example, the state produces 3 goods in 4 provinces, so only the 3 goods are shown, but as you can see in the tooltip, the value for the good is the sum of all the provinces which produce that good.
(Obs: speaking of fish, this would also require a rework on the good bonus to make them truly compelling, please no more sailors modifier).
The tooltip should also show the bonus that good is giving (or not) and why.

On the trading part is the second idea I want to get from I:R, the trade diplomatic option.
There, the green arrow means goods being imported and the red arrow is for exports.
You can see that, in the example, Portugal is importing 1.00 of cloth and exporting 1.00 of fish (as it's also said in the tooltip) in their capital state of Alentejo.
In EU4 though, production can fluctuate with modifiers in a short span of time, so in one moment you're trading all your copper, but right on the next you're on a deficit.
As such, you can cancel a trade agreement on the next month from it being set up.
A deficit of a good will produce a state (or country, if it's the capital) penalty, which I'd suppose it would the the opposite from the bonus it gives at 1 good.
Bigger deficits than 1 incur the surplus bonus mirrored as a penalty, which also stacks.
Also, states would have a limit on how many goods they can import, based on the total development from its provinces.

As for how that trade itself happen, that's the difference from I:R, it makes use of the nodal system.
You can ask for an import from anyone within trade range, at a cost of some DIP.
But here's the thing: it wouldn't follow the "natural" trade route. Instead, you'd create an "artificial" route.

Let's say that you, as Portugal, want to import, with your home node in the Sevilla, spices from the Mamluks, with their home node in the Alexandria node.
A route would be created directly form Alexandria to Sevilla, and you'd use transports as upkeep to the route (I'm thinking something similar to HoI4's convoys, in which more boats are needed the more distant it is, and it would have a great side effect of giving a much more importance to the, as of now, subutilized transports).
Light Ships can also protect the route, which could have some piracy and priveteering mechanics associated as well.

The price you pay for the good would receive a discount from the influence you have in its node of origin, as per the formula:

Code:
You can also set up internal trade (by using the "+" box in the state interface), where you won't be paying, but if it's between states in different nodes, you'll need to use transports all the same.
Imports from vassals and colonies should cost a fraction of the value it normally would.

As a sidenote, when requesting a trade agreement, we should select a specific good from a specific state, so that the one who's asked can see with how much they'll be left with in that state (which should be shown straight in the interface of the request).

CONCLUSION
With this system, we'd get a lot of value from trade goods, something I see as extremely positive in I:R (and that is, quite frankly, very underdeveloped in EU4 currently), while having the unique spin of the trade system of EU4.
It'd also make getting your own foothold in, say, India or Arabia still very strategically valuable, as that land will have its goods shipped to you for free, and even if you want to import something from there, you'll receive a discount based on your influence in that node.
Again, I don't know if there's a policy against using mechanics from other PDX games, but I feel that it would be a waste not to in this case.
Toggle signature
My EU4 Mods:
The Internal Balance - A Stability and Factions Overhaul
The Balance of Power 2.0 - Reworking How Rivals and Neighbors React to Expansion Long Term
Slovak and Turkish Cultures Tweak