Jump to latest Follow Reply
Menu
Install the app
You are using an out of date browser. It may not display this or other websites correctly.
You should upgrade or use an alternative browser.
Europa Universalis IV 77253 EUIV: Suggestions 16773 EUIV: Technical Support 6039 EUIV: FAQ & Strategy Guides 202 EUIV: AAR's, Let's Plays, and Fan Fiction EU IV: Alternate History Short Story Contest Contr 26
L

We all know 1.31 concentrate gave results to crazy capitals, and there was a lot of controversy on whether that was "good" or not (I didn't mind, but I do understand the sentiments of people expecting realism/their notion of balance, so I won't argue about that part). Now it turns out that on 1.32 with the new changes, you cannot concentrate dev if it does not raise the development of your capital by at least one. 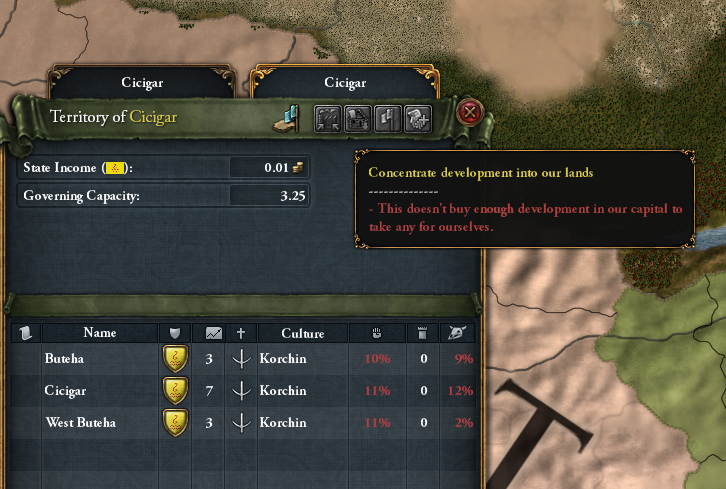 (Cicigar is 3/3/1, which under 1.31 rules would make it 2/2/1 post concentrate)
So what does that mean? Well, due to horrendous dev cost scaling, it means that once your capital is at a reasonable dev, you can barely use concentrate dev, and the only way to use it past the first few decades is to move your capital. I guess what I had in mind with new concentrate is that it lets you burn dev even if it won't raise your capital's development, which I suppose can cause it to be a trap button for some players, so I do understand this block.
Perhaps a good compromise would be to introduce some sort of "concentrate development progress bar" that lets you deal with these cases when the state you are concentrating is not wealthy enough? Or maybe concentrate should pick another stated province to send development off to?

My screenshot is certainly exaggerating the problem (it's already 1446 and I can't use it ) due to Oirat's capital being mountain and me conquering much more aggressively than a typical run, but I think more ordinary playthroughs will still easily hit this problem pretty quickly, say within 1500. I suppose mil tech reducing points razed, which I'm assuming will impact how concentrating works would make it worse and worse.

So, the question is... should concentrate essentially be unclickable after the early game unless you move capitals around? I obviously have my own agenda here, since the ability to burn uncored dev (I don't care about capital dev) helps WCs a lot, but even when considering more "normal" playstyles, I feel like this phenomenon is not very good, which is why I'm making this post.
Toggle signature
Some cute past runs:
1531 Oirat WC, 1579 (no horde) Ottomans one tag, 1508 True Heir of Timur as Sistan, 1692 No horde/shogun Ryukyu one tag, 1536 Venice -> Rome (VH), 1474 Mongol Empire, IR WC in 60 years
Ongoing run(s) on Twitch: Christian Flanders Flemish One Culture (no tag switches/HRE/horde allowed)
Reactions:
T

I was under a similar impression, that you'd be continue to be able to concentrate to no benefit to the capital. From an internal consistency standpoint, it doesn't make sense that the ability to screw up target territory is *necessarily* contingent on the ability to benefit elsewhere.
Toggle signature
ROTW Bros: Unreformed all game | Video: Great Khan Achievement with Mongolia.
Reactions:

So you cant even use concentrate dev if it cant raise your capitals dev? So any country with a mountain province wich isnt taking Constantinople itself can just bugger off and not use a entire game mechanic.
Reactions:
A

That is really annoying, a paid DLC feature already being made useless after one patch.
Reactions:
L

Btw for the record, this is on the pre-release patch, so perhaps this has already been addressed on the upcoming release patch (or some planned hotfix). Hopefully we get some input from the developers about this.
Toggle signature
Some cute past runs:
1531 Oirat WC, 1579 (no horde) Ottomans one tag, 1508 True Heir of Timur as Sistan, 1692 No horde/shogun Ryukyu one tag, 1536 Venice -> Rome (VH), 1474 Mongol Empire, IR WC in 60 years
Ongoing run(s) on Twitch: Christian Flanders Flemish One Culture (no tag switches/HRE/horde allowed)

Paradox seems to have a fetish with taking away stuff people paid for. If they continue this trend in EU5 then the difference between a man with all dlc and a man with non is nothing since both cant use the mechanics of the game.

Alexander0506_1 said:
That is really annoying, a paid DLC feature already being made useless after one patch.
Click to expand...

Happened with Emperor too where the Expand Empire CB got made unusable in practice and setting yourslf up to use it is legitimately harder then just conquering all of Europe and releasing it as new HRE countrys.
Reactions:

I remeber feature from DLC "pause of westernization". Now is forgotten and useless, but suma sumerum better is now
Toggle signature
This isn't "€uro₽a universalis" but "Europa Universalis"​
EU4 other stabilization - very necessary suggestion for EU4
Suggestions for RNW
Reactions:

Kinda how I envisioned it in the first place. Useful at the start, useless at the end. It makes sense realistically too. Once your city is big enough, 1 single town isn't going to do much in increasing it's size, so why bother?

I kinda like it this way. If only we could choose which province to develop instead of it always being our capital. Maybe it would become a bit too OP again if that was implemented.

Although maybe PDT went a bit too haywire with this nerf. The community hasn't helped though, loads of people were shouting for it to be removed completely. It's a hard thing to balance when one side of the community wants it to stay and the other wants it to burn in hell (lol).
Last edited: Nov 10, 2021
Toggle signature
"The main thing is to make history, not to write it." - Otto von Bismarck
Reactions:
S

I think the best thing to do here is let concetrate dev spread the dev around a little more, with dev more regularly winding up in non capital state cores to allow more long term usage.

The two simple options (just have a button that burns dev while doing literally nothing else, or what they've actually done, which is more or less equivalent to just removing the feature from the game) seem to me to both be bad options. It's bad game design in either instance. Having a more flexible targets for the developement is the only striaghtforward answer that springs to mind.
Reactions:

moscal said:
I remeber feature from DLC "pause of westernization". Now is forgotten and useless, but suma sumerum better is now
Click to expand...

That feature got turned into "developing increases institution in province".

Locking that behind a DLC is one of the worst things the game had ever done for non-DLC players.


But yeah, there's tons of examples of features getting nerfed into the ground (export minorities being my favorite) after release, this is just another for the pile.
Reactions:

Alexander0506_1 said:
That is really annoying, a paid DLC feature already being made useless after one patch.
Click to expand...

The same with Expel Minorities. Both are paid DLC content and went from too strong to usless.
Reactions:
A

An easy solution would be ability to mark a stated fully cored province of your choice as the target for concentrate development.
Reactions:

Wow that's a shame. When I read the changes I had assumed that it would no longer raise your capital to absurd amounts but would still lower the concentrated provinces. I don't mind if the development vanishes in to thin air, I just want it gone from my new land haha
Reactions:

I think that they added loads of extra monuments as a replacement for nerfing this feature heavily.

I'm fine with them adjusting paid for features if its necessary and in the case of concentrate development and pillaging it probably was necessary.
Reactions:

So it isn't even a "cheaper core creation" button. Well, that's that many less clicks feeling mandatory

One day, if that is possible, I would love to hear about the intent behind the original feature, the one behind development and how it all correlate. Achievements, era bonus and some of the missions around wee clearly designed with a soft cap in mind, so was it a case of "we wanted to change that" or one of "that was not the expected result"
Toggle signature
Trade and production suggestion
Reactions:

puddingkip said:
Wow that's a shame. When I read the changes I had assumed that it would no longer raise your capital to absurd amounts but would still lower the concentrated provinces. I don't mind if the development vanishes in to thin air, I just want it gone from my new land haha
Click to expand...

Couldn't you use scorched earth?
Toggle signature
"The main thing is to make history, not to write it." - Otto von Bismarck
Reactions:

Well, we are dumb enough to still buy the crappy dlcs, so why should they even care? I am srsly here.
Last edited: Nov 10, 2021
Reactions:

I like wars and maps said:
Happened with Emperor too where the Expand Empire CB got made unusable in practice and setting yourslf up to use it is legitimately harder then just conquering all of Europe and releasing it as new HRE countrys.
Click to expand...

Essentially a stealth nerf killing an Emperor DLC feature but sneakily mentioning it nowhere. At least Paradox is up front and honest about the concentrate feature, although I personally also do not like the change.. how about spreading it out over existing states, with the current raze mechanic determining whether the dev will be increased or not. From what I read in the Leviathan dev diary that was the original intent but it instead turned into mega capital cities.
Reactions:

This feature really wasn't overpowered beforehand, since it was one of the few ways we have to check back against province + dev bloat that's built up over the game's lifecycle, and you'd typically lose dev overall which made it a long-term power decrease.