Jump to latest Follow Reply
Menu
Install the app
You are using an out of date browser. It may not display this or other websites correctly.
You should upgrade or use an alternative browser.
Cities: Skylines 5710 Support & Bug Reports 7175 Suggestions & feedback 2862 Modding & Resources 1814 Official Information & Announcements 133 City Journals and Let's Plays 478 Cities: Skylines Console & Windows 10 Edition 835
A

I know there are bunch of similar threads, but I just couldn't help myself - I love the game, love building cities. However, I'm also super casual and mostly play with only vanilla assets + few mods to make life easier. But I thought I'd write down what my personal wish list would be - perhaps (however unlikely, I know) some dev working on the game might like some of my ideas?

Road system:
This is what I would like to see changed the most. I find vanilla road building to be so cumbersome! Weird angles things snap at, amount of mods required to get anything decent looking, general complexity of managing the network.

The way I'd envision v2 could work is a bit like Roller Coaster Tycoon coaster builder, where you can select exactly what the next segment is. I'd base this on CSUR mod - which largely does what I have in mind, but is performance hog and somewhat unintuitive.
With system like that it could be really easy to create realistic road systems with ease. In addition:

Low-density office zoning. Many suburbs here in the US sometimes have little office parks where the tallest building is usually no more than about ten stories. I know I can achieve this with a district and applying the high-rise ban policy, but it doesn't unlock at the same time that office zoning does and is tedious as hell.

More variety of roads, especially asymmetric roads. Just include all the varieties in Network Extensions 2 and I'll be happy.

Underground power cables for short runs (though I think the OP touched on this a bit). I get tired of building something a little ways from the power and have to plop down an unneeded park to bridge the gap or put down a short run of massive electrical towers to convey the power.

More variety of train and metro stations. There's a reason I jumped on those recent creator packs when they came out.

SMALLER TRAIN STATIONS. Not every train station has to be a massive park-n-ride. Example: 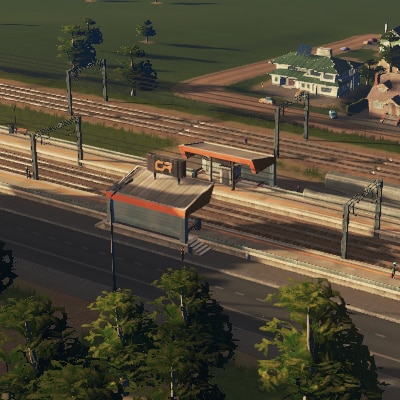 I agree with the population scaling 1000%

I wouldn’t mind seeing a DLC for zoning military installations like they did for university and industrial. I think it’d be pretty cool to be able to zone my own Pendleton or Naval Station Norfolk.

I wouldn’t mind seeing a DLC for zoning military installations like they did for university and industrial. I think it’d be pretty cool to be able to zone my own Pendleton or Naval Station Norfolk.
Click to expand...

You just reminded me of something else I would like: make airports be a zone rather than a plopable building. You get to put down your own runways, control towers, terminal, maintenance buildings, etc. Maybe make it like the industries DLC, where you have to have a chain of buildings that provide different services or functions (like for example, runways need runway maintenance facilities, planes need hangars, etc).
Reactions:
A

Another idea: Implement proper first person mode to roam & explore the city. There are some mods, but they are very clunky. This would adjust field of view, etc. make street level feel less cramped.

It would need more detailing and graphical fidelity to look really good, but I think many assets already look quite amazing.

Also allow driving cars, trucks, buses, trains, etc. around the city infrastructure. Heck I would pay for a DLC that gave me ability to drive trams / trains / metros around the city I built.

SimCity 2013-style low, medium and high density RCI zones with the proper scaling and building design of course. Along with its crystal clear distinction between wealth levels. The few things that game got right

I think we also need more building varieties, and zones bigger than 4x4. Mixed zoning would be nice too. It's sad that console you can walk around and pc you can't walk around in your city.
Reactions:

A more in depth logistics chain. We have specific industries that produce specific goods types but they mostly get turned into generic goods (purple) then fed to commercial. The one exception is the green dlc commercial which takes a bit of raw agri. I want more of that. Let us zone more types of commercial. Make each type of commercial ask for different kinds of industry products. Add more industry types and separate the product types out. Make meat and grain separate. Make city services consume product. Medicine industry, machinery, etc.

Promethian said:
A more in depth logistics chain. We have specific industries that produce specific goods types but they mostly get turned into generic goods (purple) then fed to commercial. The one exception is the green dlc commercial which takes a bit of raw agri. I want more of that. Let us zone more types of commercial. Make each type of commercial ask for different kinds of industry products. Add more industry types and separate the product types out. Make meat and grain separate. Make city services consume product. Medicine industry, machinery, etc.
Click to expand...

My wishlist is way simpler:

Actually just played the Highrise City demo. Its pretty much everything I want.

As someone who loves watching cities grow and is not very fond of directly placing buildings (other than services monuments or unique buildings), my biggest requests would be...

Better and more complex zoning:
- Customized zoning to choose what type of building will grow, including the current district specializations.
- Density understood as something that exists not only vertically, but also horizontally.
- Building themes as part of the zoning tool (being able to mix different themes if you want to).
- Bigger zones.
- "filler" tool.
- Curved zones.

1. Customized zoning, or being able to mix different types of zones, is basically trying to replicate what happens in reality in a more accurate way. Not only implies the basic ability to mix zones as we know them, but also having exclusive buildings for certain types of mixed zones. Is not unusual to find a residential or office building that has some type of commerce on the ground floor or even tall skyscrapers that have different uses. This would also include the current district specializations, since i believe they make more sense as part of the zoning system. You want a beach front with some high rise residential, hotels and those fancy beach clubs? go for it.

2. Density needs more variety and they key factor for that would be to understand density as something that also happens horizontally. How close are buldings from each other? not only the structure but the whole property with any kind of garden, parking slots or plaza that is directly attached to that building. It would also be great if instead of a policy to ban high-rise buildings we just had a medium density option. With that in mind, mixing up density options across your city would provide the kind of variety that you can find in any city nowadays and have a better chance at avoiding that everything ends up looking the same or way too bloated with the same type of buildings right next to each other.

3. Building themes just follows the same principle as the two first points. Giving freedom to mix different options to obtain more variety and a more natural look to your city. As european, sure, there are a lot of old buildings, but also new ones and outside of very protected zones is not rare that they end up being mixed.

4. Bigger zones understood as two different things. First, bigger zones to support more low horizontal options, such as a big residential or office complex or a big factory. Second, even more bigger zones as something exclusive for farming and forestry industrial zones. No, not the ploppable industries buildings, but the growing industrial zones.

5. The filler tool would be a way to quickly put something on those gaps you get when placing roads, zones and buildings. They are not big enough to place anything on them but they are big enough to look bad. This tool would allow to quickly fill the gap with a variety of options that would only work visually but help to make your city look better. For example, a gap between two office buildings could be filles with just concrete, parking slots, a plaza...

A thing I would really love to see is the possibility to zone low-density residential in a way that no buildings larger than 2x2 appear, but these buildings are placed in two or three rows to fill the full depth of 4 squares. Small auto-generated footpaths could connect the second row to the road.

Such a district style would be great to simulate low-income areas or even slums.
Reactions:

Promethian said:
A more in depth logistics chain. We have specific industries that produce specific goods types but they mostly get turned into generic goods (purple) then fed to commercial. The one exception is the green dlc commercial which takes a bit of raw agri. I want more of that. Let us zone more types of commercial. Make each type of commercial ask for different kinds of industry products. Add more industry types and separate the product types out. Make meat and grain separate. Make city services consume product. Medicine industry, machinery, etc.
Click to expand...

While I love this for a game like Anno 1800, it doesn't really feel like it belongs in a modern city builder IMHO. A mayor or city planner of a modern city isn't really occupied with how to transport grain to a mill to process into flour for you local grocery store. In fact, most of the stuff you consume is probably produced halfway across the world and shipped in by truck, rail, water and air. So Cities Skylines' abstraction is just right for me, the focus is on having the infrastructure in place to get produced and imported goods to their destinations (shops).

More OT, some of the top items on my personal wishlist:

- Medium density zoning and mixed use zoning for those Brooklyn-style neighbourhoods.
- Zonable pedestrian streets, e.g. for European-style shopping areas.
- More realistic population and better optimisation so we can have larger cities.
- More wall-to-wall buildings and ways to make that work for anything that isn't a perfect grid. The international style in the game results in really disconnected cities that don't work very well for any city outside of America. For example, look at Hong Kong in Google Earth; from the sky it might seem like you're looking at lot of detached towers, but zoom in and you'll see their bases are actually connected to form a continuous facade on street level.
Reactions:
D

Will there be CSL 2.0 one day?? I didn't see any information so far.

If so , here is my wish-list:
1.More complete and realistic mass transits, especially metro, must with full-rendered tunnels, and multi-entrances, multi-lines transfer underground station.
2.More realistic population, yes. A high-rise office building with only 20 employees is so ridiculous.
3.Like Simcity4, with more various and realistic building levels, for example: industrial buildings will evolve from traditional to high-tech industries.
4.More various cims activities, like crimes, and interact with city events. Make cims more vivid, not just like decorations.
5.Make major mode functions form workshop into game, like Move it, Node controller, TMPE...etc.