Menu
Install the app
You are using an out of date browser. It may not display this or other websites correctly.
You should upgrade or use an alternative browser.
Age of Wonders: Planetfall 1538 Bug reports 1567 Suggestions 531 User Mods 84 AoW: Planetfall: News and Updates Archive 41 Multiplayer 53

So I'm curious about the different possible campaign endings.

I've finished the campaign once, as an Oathbound Celestian. Got the throne, xp for my race/secret tech combo, all that good stuff.

But I have two questions; are there multiple endings that are unlocked by anything other than picking one of the three choices you get when you find the grail configuration? And is there any way to play through the campaign with any other secret tech apart from Celestian and Voidtech?
Reactions:

I completed as Voidtech and with the first out of three "final" choices in 2nd mission. There's also one point where you decide on the fate of one character, but actually I don't know if this choice had any meaning apart from the said chacracter having a cameo at one point. Actually the choices feel the least impactful from any campaign that I've played in Planetfall...

It would be cool if someone had a list of potential outcomes somewhere...
Reactions:

DragonZee said:
It would be cool if someone had a list of potential outcomes somewhere...
Click to expand...

I keep wishing the Planetfall team would release a campaign 'guide' sometime after the release of each campaign. Wouldn't answer our current thread here since the Oathbound one is new enough yet that I wouldn't expect a 'guide', but I am always curious about the path not taken and wouldn't mind spoilers for the older campaigns that I have already played.|

Still if you don't mind being spoiled here are my choices and results.

I completed Celestian by going Oracle supported Empress. I mostly did that because I just wanted to finish the dang mission and pretty much everyone I expected to object to that was already on the ropes. Meanwhile joining ELOP was going to be a pain since it would just be me and the Amazons whose quest I completed. Kir'Ko was already dead and our poetry loving companion was one battle away from being eliminated.

One question I have is if you continue to get the Dreams and Teacher in the second mission if you go Voidtech or if something else takes it place. Probably just a slight conversation change acknowledging your change.

As for the lady you can choose the fate of in the first mission I choose to pardon her and got a nifty hero with an entropy skill riding a Oathbound Lightbringer. I didn't try the other options so I don't know if her skills or such change or if you don't get her at all or whatever. 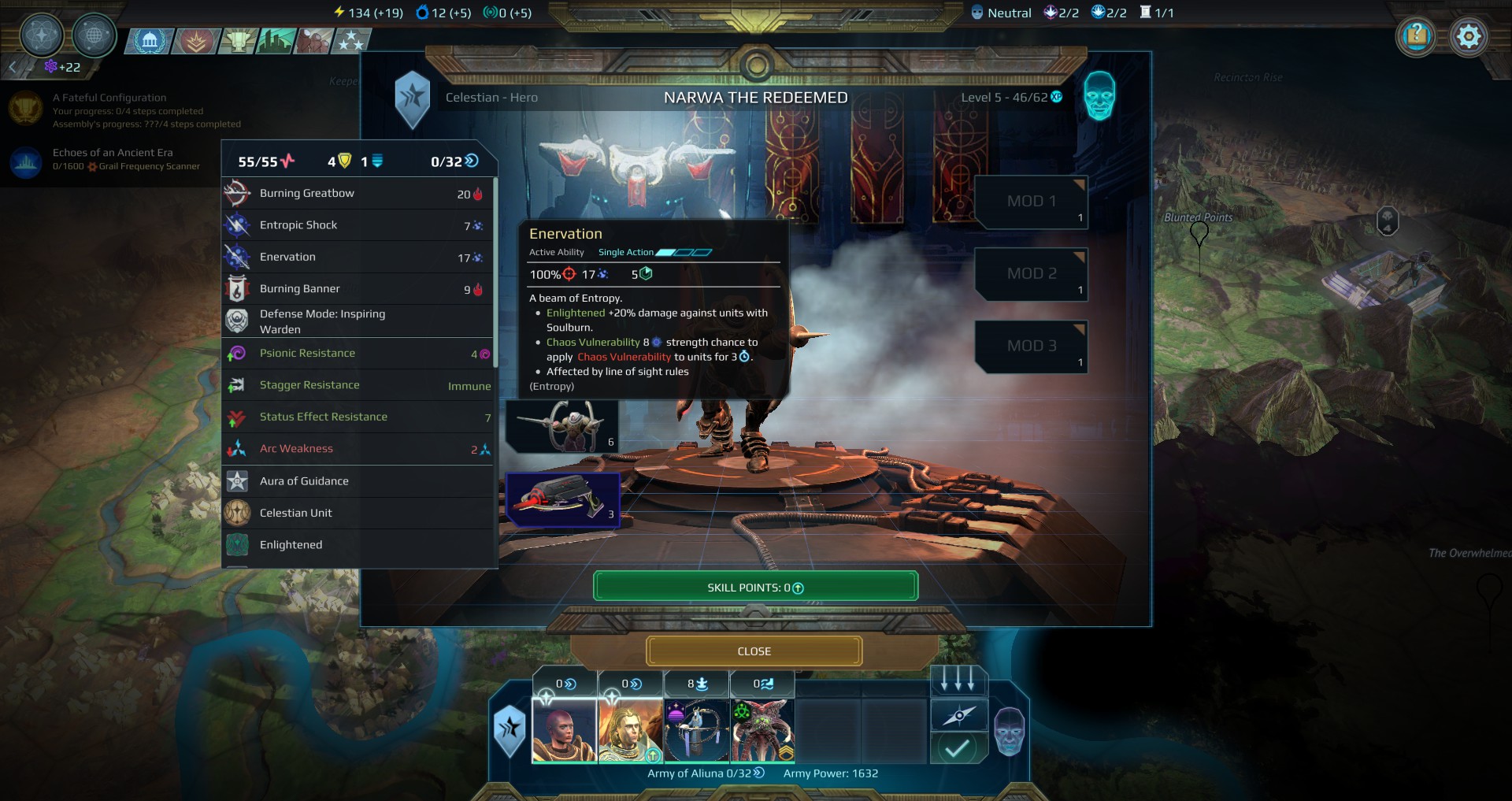 no difference at all......
Reactions:

Hunnuli said:
One question I have is if you continue to get the Dreams and Teacher in the second mission if you go Voidtech or if something else takes it place. Probably just a slight conversation change acknowledging your change.
Click to expand...

Yes, even if you go Voidtech she gets more messages from him. One when she reaches the imperial palace and then another after getting the Grail. In that one we learn who he really is
I don't know if going celestial changes much things. She gets another vision of the past and then later she has a reveal full dialog with her teacher

I must say the that campaign got some interesting twist on the end. Learning who is who really and decide the fate of the new Star Empire is fun
Toggle signature
Still waiting for Runemaster

Yeah, you get that one hero depending on the choice, I forgot to mention it.


I also looked through all the choices in the 2nd map and took the one that seemed the least bothersome to finish (in this variant it was easy to pacify some AI and rest was done in by my allies which were simply stronger like the guy who has Paragon Elites and who otherwise would be a pain to defeat ). I also think the first choice is cannon.

Oh and I picked Voidtech becasue it simply is one of my fav techs, alas both Celestian and Voidtech synergize well with Oathbound. Keep in mind though that this choice is also important if you want to "continue" the campaign afterwards in GE: becasue you're getting Aliuna as a level 5 hero with the chosen Secret Tech...
Reactions:

Do you mean the one were she become a new Carminia with ORACLE as the new CORE?
Not bad. Maybe the second, she empress alone, appeals more to me. But that is just for tastes

Yes, the first one on the list.
Reactions:
M

I believe the joining the free league is the canon.

If you buy the ultimate or deluxe edition, they come with one very interesting artwork regarding the starking campaign ending, this artwork depicts all races have their representative who discuss somethings in what appears to be the oathbound's circle of heroes (which is the equal to the round table of camelot)

mbuh said:
If you buy the ultimate or deluxe edition, they come with one very interesting artwork regarding the starking campaign ending, this artwork depicts all races have their representative who discuss somethings in what appears to be the oathbound's circle of heroes (which is the equal to the round table of camelot)
Click to expand...

Where would that image be?
I have seen something similar on the ELOP ending. That still doesn't mean it's the canon ending
Toggle signature
Still waiting for Runemaster
M

Dang I didn't know they put these campaign images for easy access there
Reactions:
M

I also wonder why they don't include it in game, or perhaps there is a secret ending of some sorts that display that image, i only have finished the joining elop route with celestian, i thought i got that round tably image, but none popped up.

I also did all the seers side quest in previous mission, which i thought impact the ending, but i'm not sure at this point.
Reactions:

I checked the images.

The ones i found ara one called Oathbound_02_Briefing_01 which shows the round table of the Oathbound and then is Oathbound_02_Debriefing_03. That one show the ELOP ending with a guy, Thorian i think, talking while the rest of the races are in circle around him. In that second one appear the amazon, kir'ko, vanguard and Oathbound. When i got the ELOP ending by walking out of the whole become empress thing it was the one that was show

Don't know if i can upload them here. In the copyright sense, otherwise i would put them

It is odd that the picture didn't displayed on my case

Do you have to be void tech when joining elop?

mbuh said:
It is odd that the picture didn't displayed on my case

Do you have to be void tech when joining elop?
Click to expand...

Didn't show for you?
Strange. In my run i was Voidtech, but that shouldn't change anything. The image is for joining the ELOP not for being Voidtech. I think that as a rule of thumb secret techs only affect your strategy in the game, not the endings

Hey guys on Triumph i am gonna upload the image of the ELOP ending on the forum, if there is a problem with that just tell me and i took it down 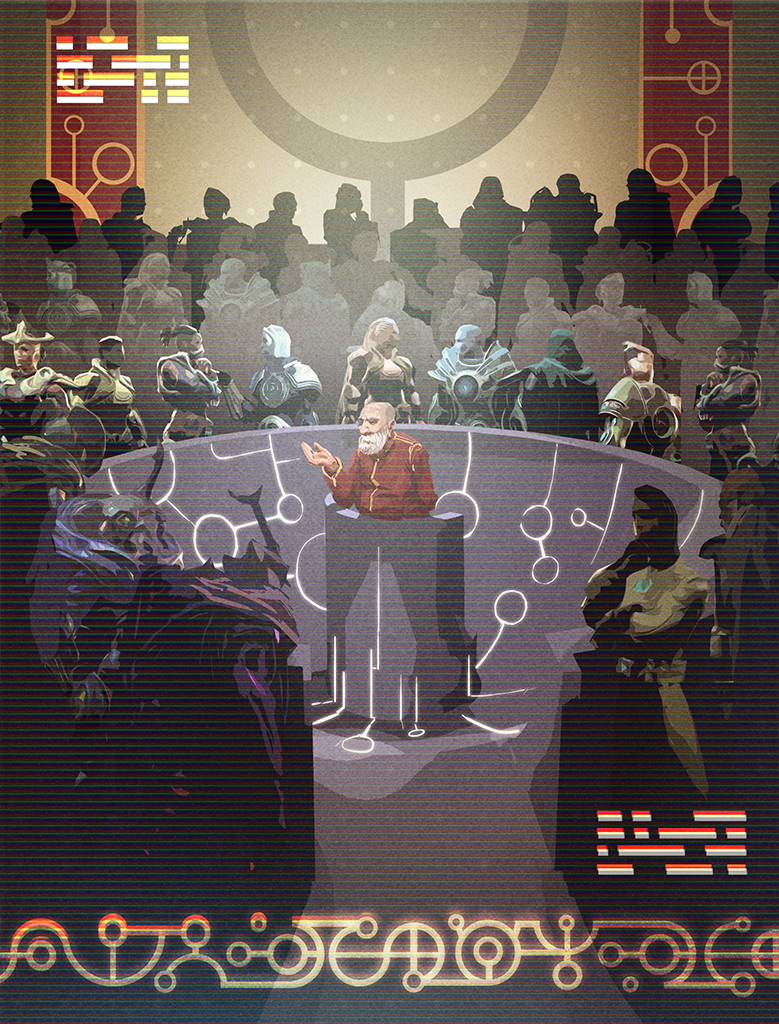 Really wish you could have gone Xenoplague, even if it means having a -200 opinion penalty in the next mission.
Could even have a tiny amount of custom dialog. "Wait... what? You're doing what?"

But plot wise, Psynumbra would have been a good third choice for the final mission.

I suspect myself that the 'canon' ending is becoming Empress with ORACLE. Mainly because she moves into Empire Mode, and ELOP is one of the possible alliances you can fight.