Jump to latest Follow Reply
Menu
Install the app
You are using an out of date browser. It may not display this or other websites correctly.
You should upgrade or use an alternative browser.
Imperator: Rome 8911 Bug Reports 3649 Suggestions 2387 User Mods 649 Tech Support 502 Multiplayer 56 After Action Report (AAR)

This Opening Post (OP) wants to be a collection of Multiplayer (MP) tips in I:R regardless of any mod installed. The thread is open for discussion about specific mods and I will update this OP with all the suggestions/ideas from players.

They are the base of every ouptut (taxes, goods, manpower, research points, trade routes). You want to have the most POPs as possible. The quickest way to increase your POPs is through conquest. The second quickest is through enslavement and the third is organic growth.

Unless you are at maximum research efficiency, you want default taxation. If you are capped on research, it may be wise to switch to Harsh Taxation (Vanilla)

To maximize your income you want to have the most surplus of the most valuable goods as possible and export them. Locate where the goods with the best trade value are produced and when you control the territory stack as many slaves as you can to produce the maximum goods. You may want to invest in laws, technologies and buildings that reduce the slaves needed for suplus or right away increase the goods produced.

Do not forget to have markets that buy your expensive surplus goods. If you have surpluses that are not selling you may want to create tributaries or league cities that buy your surplus.

At the start of the game you will rely in mercs and levies. Use mercs to assault forts for faster conquest and try to keep levies unscathed. You want to switch to legions as soon as possible.

With levies you have a set of units that is determined by the cultural matchup of your integrated POPs. The same happens with Mercs. With legions you have better modifiers with distinctions and you can choose the unit setup of your army to have the best units possible. Legions can drill and improve their experience, with 100% experience a legion gets a 30% reduction on damage. Drilling legions increases your military experience gain, too.

To decide which unit is best for you, you need to take into account the damage formula factors and the morale number. There are global and specific modifiers for units. For example, for land units, there is the morale, discipline, experience, siege and enslavement efficiency factors that apply to all of your land units:​

Ledger : Cohorts​
To decide which is your best unit you need to look at the specific unit modifiers. For example:

Ledger : Cohorts
​
In this setup we can see that units have special modifiers like the attrition weight, morale damage taken and strength damage taken (first column). This special modifiers can very important and define very much the unit. In this case, Heavy Infantry takes a lot more attrition weight than Light Infantry, making it very dependent on supply trains when attacking in territories with low supply. Mounted Skirmishers +25% morale damage taken is a huge modifier that will affect the morale of these units in battle, making them to flee from battle much faster than the other units.

This special modifiers cannot be changed, on the other hand, the offense, discipline, movement speed, defense, morale and cost modifiers that are presented in columns can be modified by technologies and military traditions.​
For land units the damage formula factors are the following:

Damage formula​
Because the formula is multiplicative, you want to maximize all numbers at the same time. Explained here: 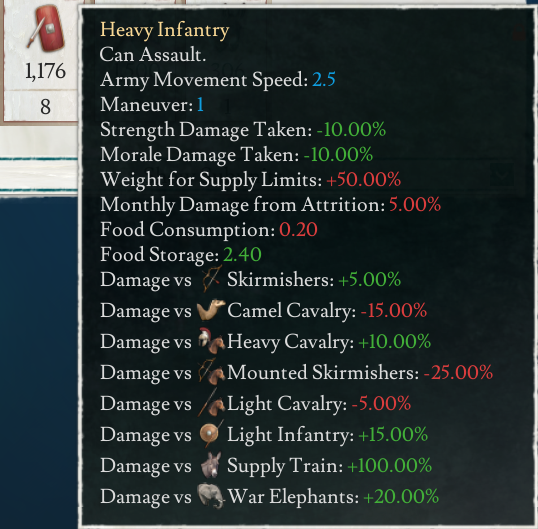 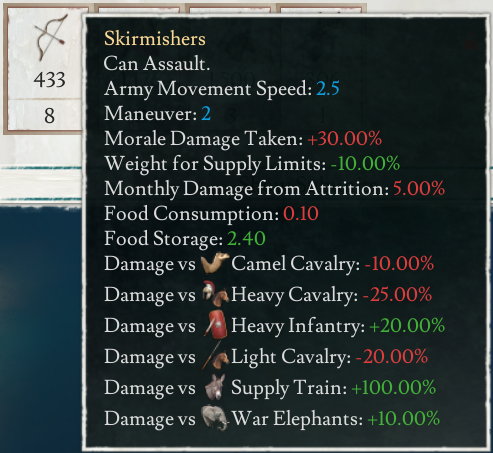 Versus factors of HI and Skirmishers​
Looking at the Heavy Infantry (HI) versus against Skirmishers +5%, one could think that HI is a good counter against skirmishers. However, you need to take into account the factor of skirmishers against HI, that is +20%. The resulting factor is not good for HI, as every turn, HI will deal 1.05 damage but receive 1.20 damage from the skirmishers. I suggest you recalculate all the unit tables in Vanilla or any mod you are using by simetric Versus factors. In this case:
​

Experience effect​
It is clear that a player that wants to deal as much damage as possible to their enemy will want to switch to legions and choose the best unit with the best specific unit modifiers that he can achieve. In Vanilla it is possible to have discipline, offense and defense modifiers around 60% each that nullify the effect of versus or terrain modifiers. This means that a player that maximizes a unit this way will want to have a legion with only that unit.

Finally, morale. After damage is done, morale is calculated using the following formula:

morale formula
​
The important factors for land units are total damage (calculated before) and morale. Thus you want to maximize damage and have the highest morale possible.

If player 1 has lower morale but bigger total damage than player 2, the result will be more casualties to player 2 but player 1 losing the battle because his units will have lost all their morale. This can be used in a war of attrition if player 1 knows that player 2 has lower manpower pool.

As seen in the previous chapter, you will want to find the shortest path to:
Plan before unlocking the military traditions. You have to decide your bests units depending on your starting culture and the cultures that you think will be able to integrate to unlock their military traditions. Your objective is to maximize one unit offense, defense, discipline and optionaly morale modifiers.

As an example, this is the table of two nations that have unlocked most of the military traditions in the vanilla game for all cultures:


The Versus table in the game is the following:


Using both tables you can calculate the resulting damage of EGYPT vs BACTRIA - BACTRIA vs EGYPT for all units:

Forts are a powerful defensive deterrent but cost you money.

There are three type of players:
Forts are required to allow recovery for your troops after you have lost a battle. You need to fall back behind a territory with a fort so the enemy cannot reach you and completly destroy your demoralized and depleted cohorts. For this reason, forts should be in choke points and in layers.

You can bypass a fort by conquering the territories that are next to it, so staying behind a fort is only a temporary solution.

Forts become more interesting in the late game when you need to control the province to feed your armies. Without controlling the fort, you risk running out of supplies while you chase a retreating army.

After playing some games in MP I am under the impression that I:R is a fast paced, very round up engine for multiplayer games. These are the lessons from seasoned players that I have been learning and I thougth It would be nice to post them in the forums for all players to discuss and use as a reference.

I will try to update / complete the opening post with my experience and with the discussion in this thread.
Last edited: Sep 20, 2022
Toggle signature
Playing Imperator: Rome since 2019

I have updated the OP military units chapter, explaining the different factors of the damage and morale formula to decide which are the best units to use.

I have also added the chapter Big Battles to explain in detail how to manage your armies in big battles to recover morale and keep fighting for longer.
Toggle signature
Playing Imperator: Rome since 2019

Thank you for assembling all of this sir.
Reactions: