Jump to latest Follow Reply
Menu
Install the app
You are using an out of date browser. It may not display this or other websites correctly.
You should upgrade or use an alternative browser.
Imperator: Rome 8871 Bug Reports 3643 Suggestions 2380 User Mods 633 Tech Support 496 Multiplayer 56 After Action Report (AAR)
M

Im avoiding making any overly ambitious goals and promises for this mod and will rather just take it one update at a time with small additions along the way.

The basis for the historical accuracy for this mod is based on 5 years of great resaerch done by many many researchers for Vae Victis mod for Rome 2 total war https://www.twcenter.net/forums/forumdisplay.php?2098-Vae-Victis-(VV) so a bit thank you to all of them.

Cultural unit modifiers - Legionaries and Phalanx do not fight the same

Terrain influences combat - Terrain has a larger impact on the outcome of battles on a unit level, lighter units thrive in rougher terrain and heavy ones excel out in the open as one example.

Seasonal Supply Modifiers - Provinces wont be able to support as many troops during winter months and summer in the desert will also see supply limits reduced thus resulting in more attrition.

Winter in the mountains - speed in mountains during winter is significantly slower.

XP cap on drilling legions. Training will only take you so far, to become truly elite you will need to actually fight battles

just me (Magnar) so far

Upcoming changes
v0.0017
-See discord for updates on changes and whats being currently worked on

- Active armies will now have a natural manpower replenishment and reduce overall available manpower, huge armies with low manpower or lots of manpower with small armies or somewhere in between. You cant have it all anymore.
- Increased manpower values (and from freemen) due to reductions in the above mentioned script.
- Full implementation of land terrain modifiers and cultural variations
- Reduced base province growth from +20% to +15%
- Added unit terrain modfiers with cultural variations. Pike phalanx are worse in forests than principes and all heavy infantry are worse than skirmishers.
- Reduced experience decay
- Made some more files more compatible with other mods and future update proof
- tech bonuses reduced significantly
- less than 50 stability and unrest now contribute negatively to population growth
Germanic military traditions added
v0.0015

- Added my improved trade and army UI mods
- Move slaves costs gold instead of civic
- Move citizens and freement now costs more civic than before
- Added supply infrastructure building
- Made a nubmer of files more compatible with the use of other mods.
v0.0014b

- Manpower tweaks to give an increase to manpower total and regeneration
- added small manpower generation from citizens
- capital cities and the provinces they are in now receive large bonuses to manpower. Additional cities will generate less manpower. This will hopefully limit blobbing of manpower and make client states even more essential.
[/spoiler][/spoiler]
Last edited: Jun 28, 2019
A

How do I install IR_rebalanced and what it is ?

The Discord link is dead, by the way.
M

arda said:
How do I install IR_rebalanced and what it is ?
Click to expand...

sorry i put that in there by accident. ignore /delete it. the new version doesnt have it.

I like the angle of this mod, however, something bugs me; If the aim is realism shouldn't the cohort consist of 500 men? A legion was around 5000 men total, consisting of a total of 10 cohorts. 250 is too small a number, that would mean a legion would consist of 20 cohorts. Which is ridiculous. Even the Paradox equivelant of 1000 troops a cohort is more realistic, considering a lot of auxilia cohorts numbered a 1000 men.
M

Early roman legions consisted of 4200 infantry and 300 cavalry (not including Alae).

Auxilia were more a thing in the imperial era which is at the very end of this time period if not beyond it. Many Auxilia cohorts were about 500 men but the legions at the time were organised into cohorts of 4 maniples and later 6 centuries formed a cohort.

500 would certainly fit for cohort sized units but would be out of whack for cavalry and other culture's formation.
Reactions:
A

I think If the game had more unit types and better experience system decreasing the unit size to 250 men would be more realistic but now 250, 500 or 1000 men does not change anything.
Faster recruitment in capital city would helped the smaller states. I prefer less supply for the player and loved mod thank you.
M

arda said:
I think If the game had more unit types and better experience system decreasing the unit size to 250 men would be more realistic but now 250, 500 or 1000 men does not change anything.
Faster recruitment in capital city would helped the smaller states. I prefer less supply for the player and loved mod thank you.
Click to expand...

@Magnar
Good to see you here buddy
G.S DEI Team
Toggle signature
​
A Proud former member and eternal supporter of MEIOU & Taxes
Beta Tester for Community Flavor Pack
All we have to decide is what to do with the time that is given us
J.R.R Tolkien
It is not these well-fed long-haired men that I fear, but the pale and the hungry-looking.
Julius Caesar​

Very good mod, thanks for it and i hope you will continue with it. By the way, i didn't see it in the Steam workshop, is it there or are you planning to use Steam for your mod too?

Edit, i just read the problem with Steam and the defines file
Last edited: May 8, 2019
M

next plans are to add a couple of buildings but nothing too crazy and also change slave movement cost to be gold instead of civic and make some small maneuver adjustments to units.
L

are you sure that slave movement shouldnt cost some civic , and also gold
M

this is what it looks like with both. not too great so it needs to be 1 or the other. Ill prob vary the assimilate and move costs more for all pop types as well so there will be a larger civic sink on those actions.
L

i like the reduced cohort sizes, and longer recruitement

any chance for a serious rework of military traditions? i know that in 1.1 they ll add national heritage , 2-3 buffs but that feels like not enough

Rome shouldnt share military traditions with some tribes in dalmatia

there are really odd things like dacians having argyraspides in their traditions (must get new traditions or barbarian) and macedon ''unlocking'' sarissa or entirety of post persian world using ''persian traditions'' its all just lazy, all over the place and innapropriate for anyone who knows elementary history

i m afraid many people will try to change too little and/or wont do quality work
This mod while not huge is i feel doing it right. the sizes of the cohorts/units are balanced, they are historically plausable/not far from reality while also integrated into the limited game systems. i feel this mod is one of the better ones,its not adding stuff just to add stuff, it changes what needs to be changed


edit: it might be easy to use already existing pictures on the internet to insert them into the new traditions for countries like rome,seleucids etc

something slightly different style but still similar. having it without pictures wouldnt be complete
Last edited: May 12, 2019
M

Ive have thought about reworking traditions but not got a solid direction on it just yet. Im adding to this rather minimally and slowly. Id also like to get away from a mana based game but will wait for future updates to give me more alternatives with how to actually go about it and also not jump straight into the deep end but rather see how each change goes as i add it for balance's sake.

On traditions I feel there needs to be more of a path which develops along similar types of upgrades rather than mixing a bunch of different stuff into all 3 chains. How i exactly go about that remains to be seen. Maybe linking them to political parties or loyalty or something as in changing the establishment should maybe require a relatively stable political landscape or something like that. Im still brainstorming it though.
M 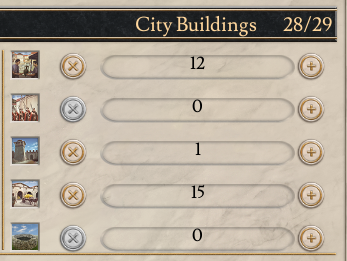 New supply building UI. was a little tight and still have to reposition the numbers but the extra building is in there for the next update.

Will allow for base of oepration provinces on the borders to keep your larger stacks in preperation for war.
M

My next goal is to address somehow the glaring issue of unit balance and variation.

My first goal will be to add terrain bonuses/maluses to the various units by faction/culture if possible to represent the different unit types.

Eg Hellenic heavy infantry should get a larger malus to uneven terrain compared to celtic/roman/mauryan etc heavy infantry, but should perform better on plains where the terrain is even.

Ill also be playing with general unit balance such that there is an ideal situation and role for every unit as there was historically. eg light infantry should excel in mountainous and hilly terrain and heavy infantry should struggle. Heavy Infantry shouldn't be an automatic "i win cos i have more HI" type of unit.

New supply building UI. was a little tight and still have to reposition the numbers but the extra building is in there for the next update.
Click to expand...